Carly Thornton is a British fitness model, stage prep coach, and IFBB Pro athlete. In 2015, Carly won Arnold Classic Europe and qualified for her Pro Card. With this feat, she’s also become the first female from the UK to place 1st in the Women’s Physique category.

However, Carly’s life before fitness was a far cry from what it looks today. During her early 20s, Carly was overweight, avoided exercise, and drank alcohol to help cope with her low self-esteem. This is her story: 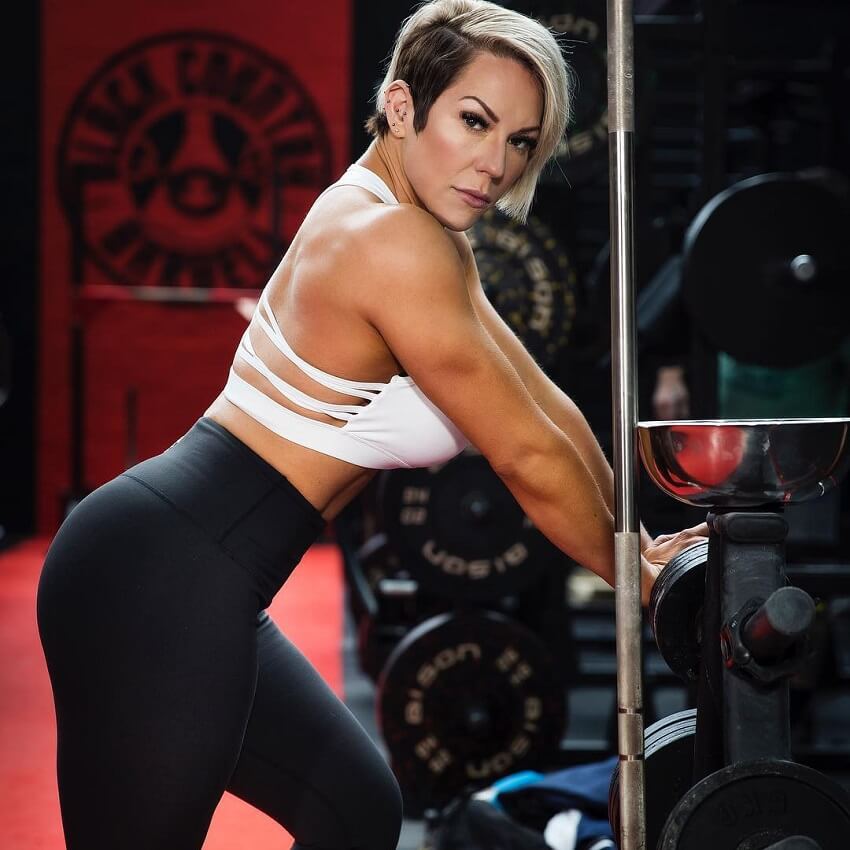 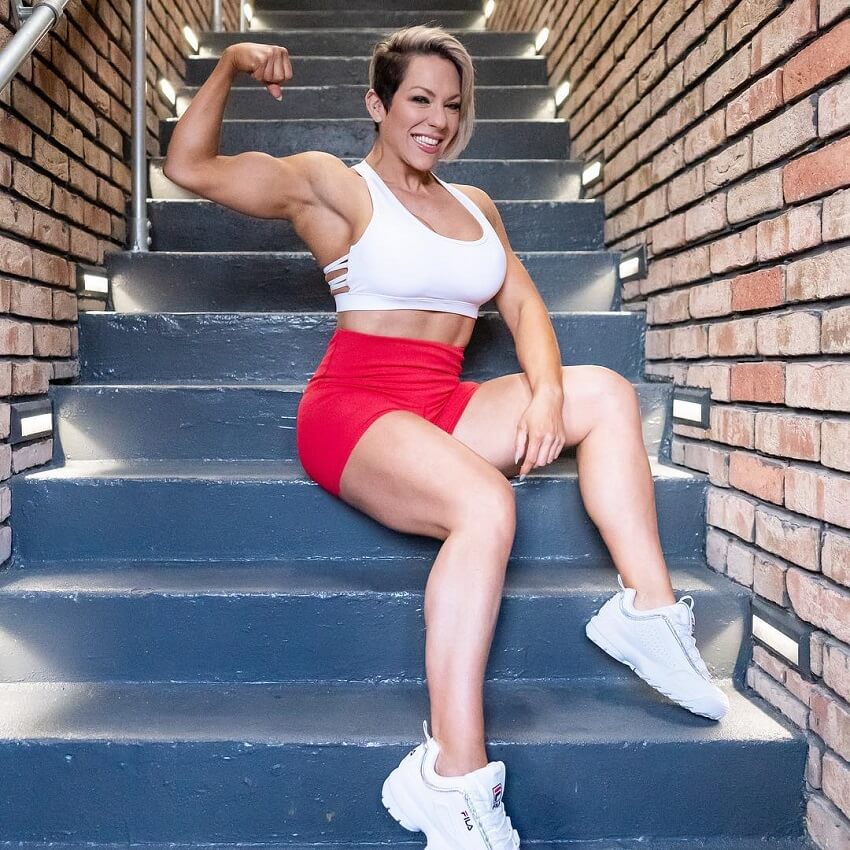 “Sometimes you need to remember that “you” time is as important as spending it with others because we can lose ourselves in the day to day hustle.” 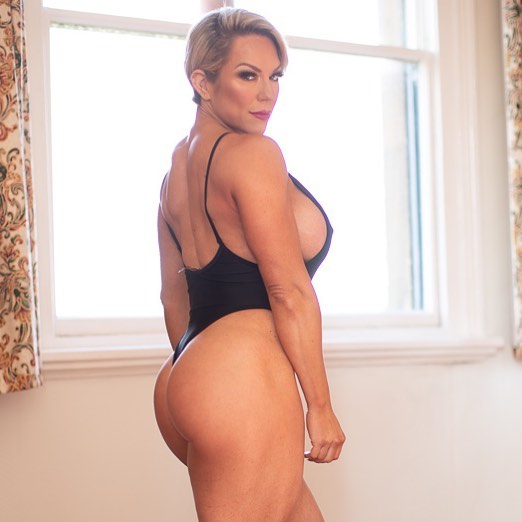 While Carly Thornton is known as a fitness model and inspiration for others today, she was once highly insecure and had body image issues.

In her late teens and early 20s, she was overweight and had low self-esteem. This took its toll with her unhealthy eating habits, affecting her both physically and mentally. As Carly said:

“Before the age of 21 years I was not fond of any activity and to be honest was pretty unhealthy when looking back. I had really low self-esteem and hid this behind my very loud personality. I loved going out with my friends, but there were times that I just wasn’t confident enough to step out and canceled at the last minute. “

Carly says, her transition to a healthier lifestyle might sound cliche, but she just woke up one day and said “enough is enough”. She decided to ditch her unhealthy habits and join the gym to lose weight.

However, it was a long process of transformation.

The hardest part for Carly was getting started. She used to “hate” exercise and was new to the world of weightlifting. In fact, she was intimidated by the sight of weights and only did cardio initially.

“Let’s be honest when you first join the gym the weights section is so intimidating, and you feel everyone will just laugh at you!” 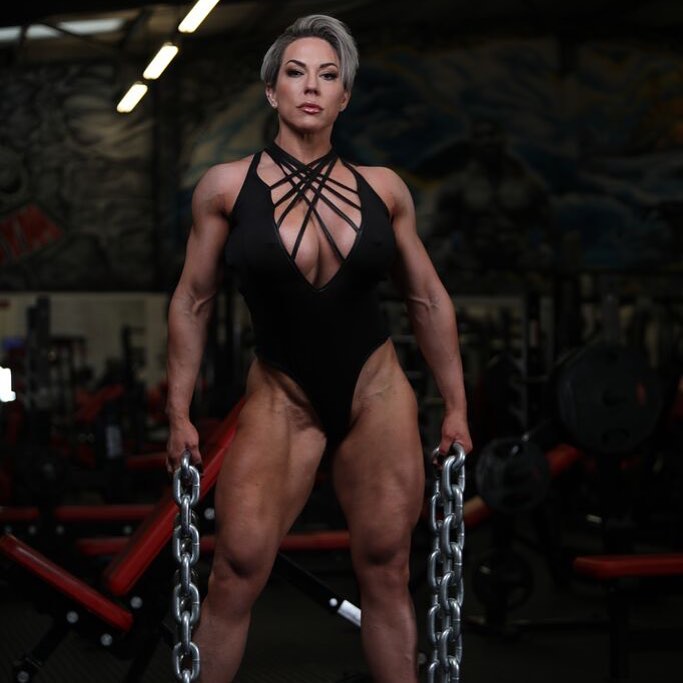 Progress in the Gym

As she became more comfortable being in the gym, Carly started lifting weights.

At the same time, she started to read up on nutrition and health topics to improve her knowledge on a healthy diet.

She also studied different training techniques, including those with weights, so she could take her progress to the next level.

In the process, not only did Carly’s body start to transform but so did her personality. She became much more confident and outgoing.

Carly’s progress in the gym quickly became the beginning of her fitness career. After 5 years of training, she became a completely different person. It was around this time she became interested in competing in fitness, as she said:

“After 5-6 years I did my first show and won! I loved being on stage and the dedication and strict regimen that comes with competing and I soon got the bug.”

After winning her debut show, Carly became interested in expanding her career to become a fitness model. She contacted agencies and magazines, hoping to land a deal that would grow her name within the industry. Unfortunately, though, things weren’t smooth sailing in the beginning. 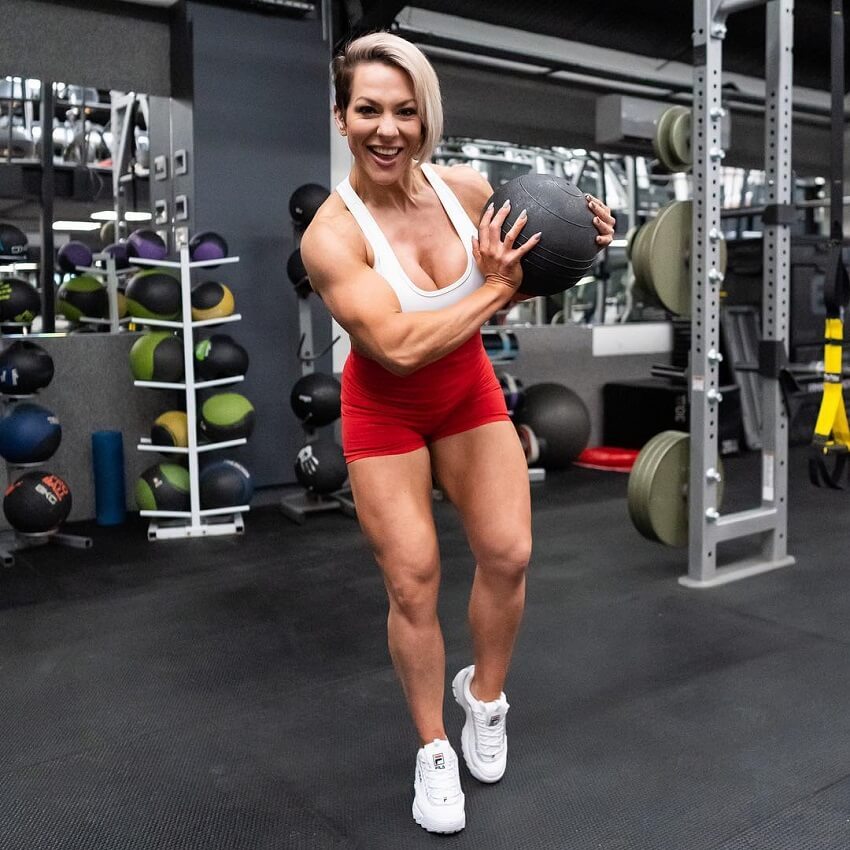 From Being Rejected to Becoming the UK’s Top Model

Carly initially faced many rejections from modeling agencies. Many of them said to Carly that she wasn’t what they were looking for. But Carly was persistent. She knew that in time, she’d succeed in her goals – and she was correct.

After several months of unsuccessful attempts to become a model, Carly stumbled upon a modeling agency that signed a contract with her.

From there, things only went onwards and upwards. It wasn’t long before Carly’s recognition within the fitness industry took off. In fact, she went on to become the most published model in the UK.

“I cannot count how many times I got turned away from agencies because they said I was not small enough, pretty enough or just didn’t have the “right” look” but I never gave up.  When you have a desire for something you need to keep on going until you make it a reality.  If you can visualize it then you can achieve it!”

In 2015, Carly went on to achieve another one of her main goals – winning her IFBB Pro Card.

After 8 years of hard work, she stepped on the Arnold Classic Europe stage and took 1st place, entering the IFBB circuit afterwards.

Throughout her career, Carly has competed as a fitness model, then as a figure athlete, only to later find her success as a Women’s Physique competitor. She’s continued to compete in the Women’s Physique class ever since.

Because she transformed her body and career over the years, Carly has widened her knowledge on various training and dieting techniques, allowing her to become a master of her physique.

With a certification in coaching, along with being a stage prep trainer, she now uses her knowledge to help others achieve their goals. Whether that’s to win a contest or just simply get a healthier body.

“From the girl who didn’t like herself very much and hated any form of exercise, now loves to live a healthy lifestyle as I know realize the importance of how it can improve and impact your whole way of life. I am so excited to be able to help others all over the world.” 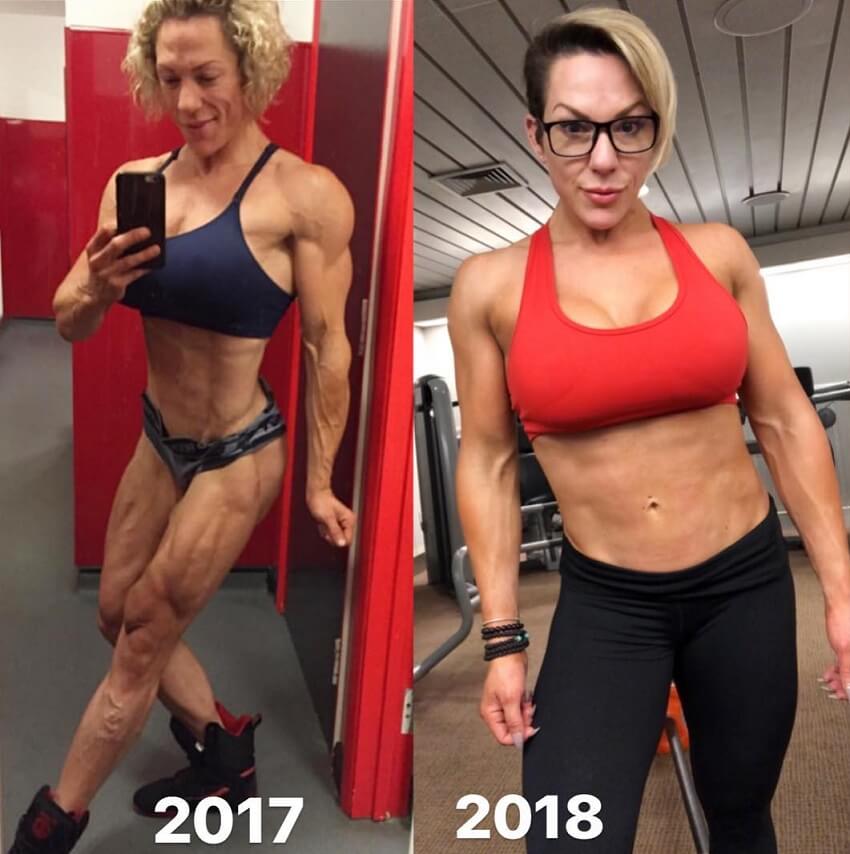 Carly usually trains 6 days per week, sometimes 7 if she has time. On top of her own training sessions, she also trains together with her clients 5-6 times per week. Carly doesn’t find this hard and says she could train even more.

In fact, one of the hardest things for Carly is taking a day off from training. That said, she admits that this can sometimes negatively affect her progress. This is why she’ll take a day off when she feels her body needs it.

Carly also ensures to get at least 8 hours of sleep every night. This allows her to keep up with her rigorous training schedule and push through the day. 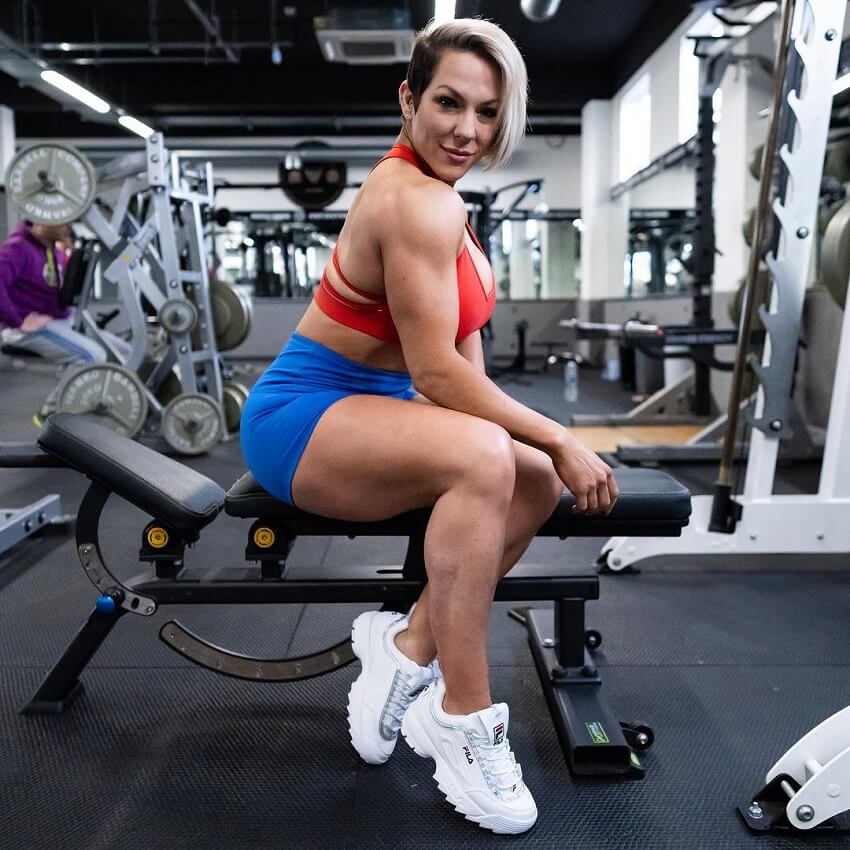 Throughout the years, Carly has used many exercises to sculpt and shape her figure.

According to her, exercises which have helped her the most are: 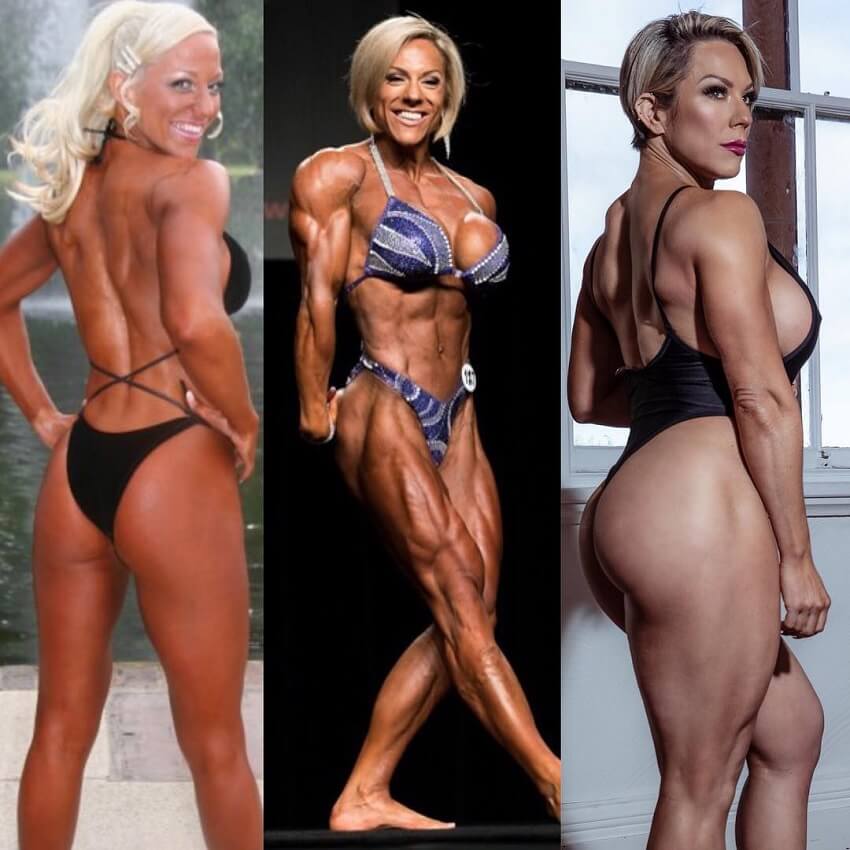 Carly Thornton eats 5-6 clean and healthy meals per day, 6 days per week. One day out of the week, she’ll eat whatever her body craves.

However, if she is getting ready for an event, Carly will tighten up her diet even more. She might even cut out ‘cheat meals’ completely if she is preparing for a competition. 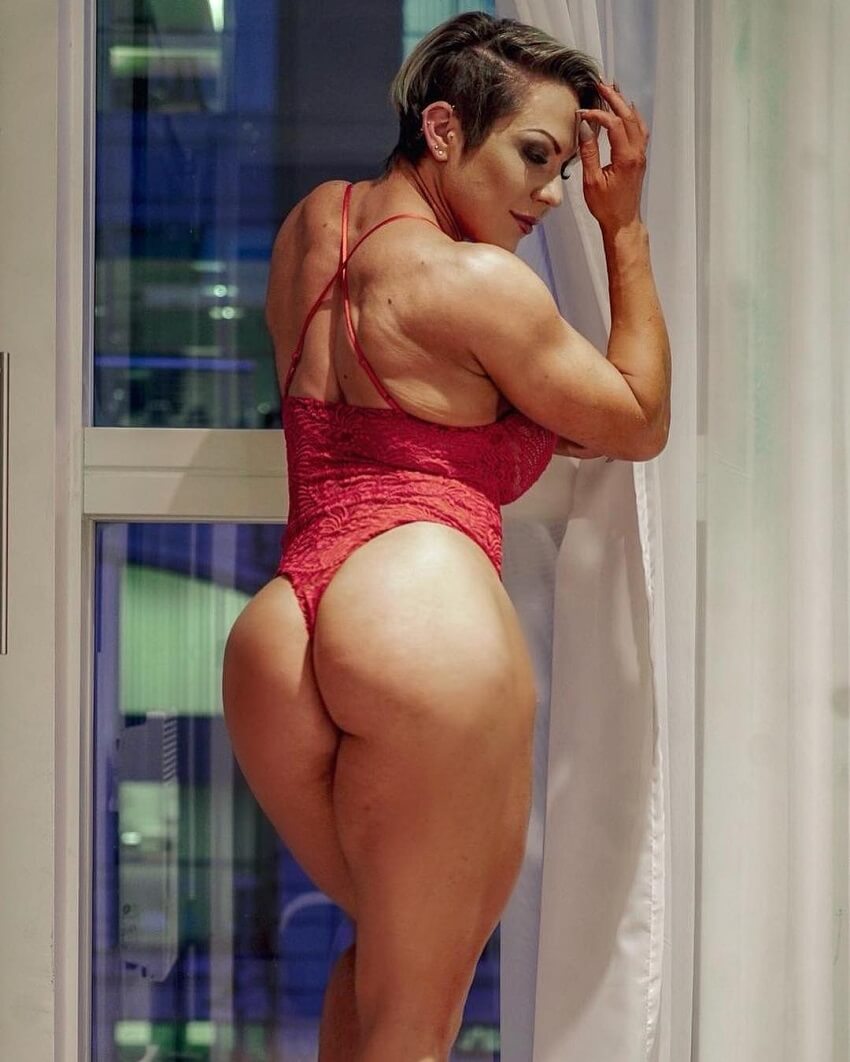 Carly Thornton looks up to a number of fitness athletes in the industry. They include:

In Carly’s words, Mindi Smith is “gorgeous not only on the outside but is stunning on the inside.”

As for Rob, Carly admires his knowledge and willingness to help others with his fitness advice.

Lastly, Mindi says that Lee Priest has always been her favorite bodybuilder, not just because of his awesome physique but also his humble attitude. 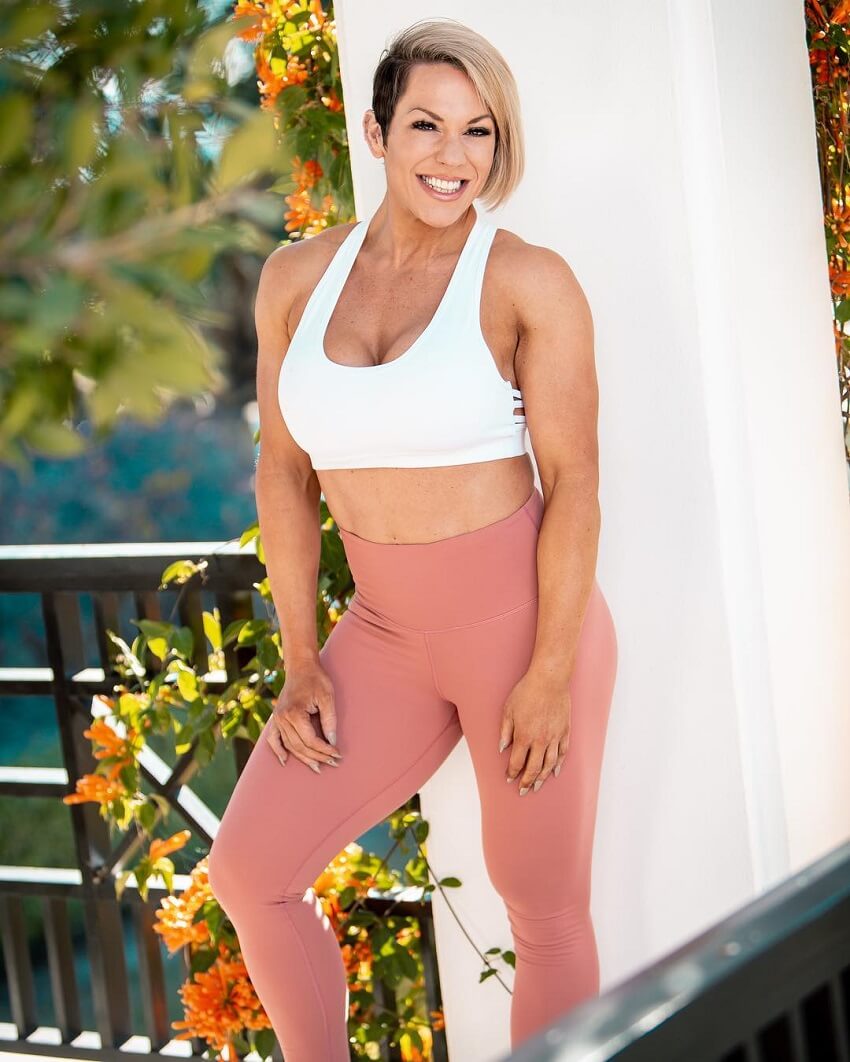 What we can learn from Carly Thornton

If there’s anything to learn from Carly Thornton, it’s to take action if you want to improve your life. Carly woke up one day and realized she didn’t want to be unhealthy and overweight anymore. She ditched her unhealthy habits, entered the gym, and started eating clean food to transform her body and life.

Carly’s story is a reminder to not expect that your goals will be achieved overnight. The road to success is often long and full of hardships. Aim to achieve small daily victories and watch how your life gradually transforms.

You are the prettiest female bodybuilder I’ve seen . I’m amazed how your physique is so fit plus your face is hard to turn away from. I know how hard it is to train and eat right , so I am very impressed of you because with a body like that your dedication must be off the chart.