He’s one of the most recognized Pro bodybuilders not only in Australia but in the entire world. Lee is famous for his achievements at a very young age, winning his first show at only 13 years of age, and turning IFBB Pro by the age of 20.

The Australian is known for causing a lot of controversy with his honesty regarding delicate topics, such as drug use and religion. 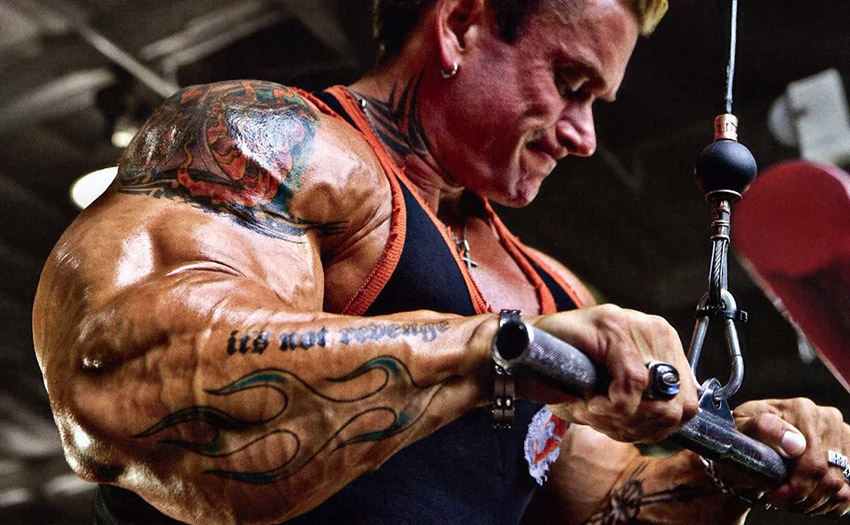 “Bodybuilding isn’t 90 minutes in the gym..it’s a lifestyle.”

Apart from bodybuilding, Lee is also known for his enthusiasm for speed and driving racing cars. He started racing when he was 32, having won many races and titles in road racing, drag racing, and circle track.

His most notable successes took place when he won the SCEDA Racing Championship in 2006, in California, and Rookie of the Year in 2005. 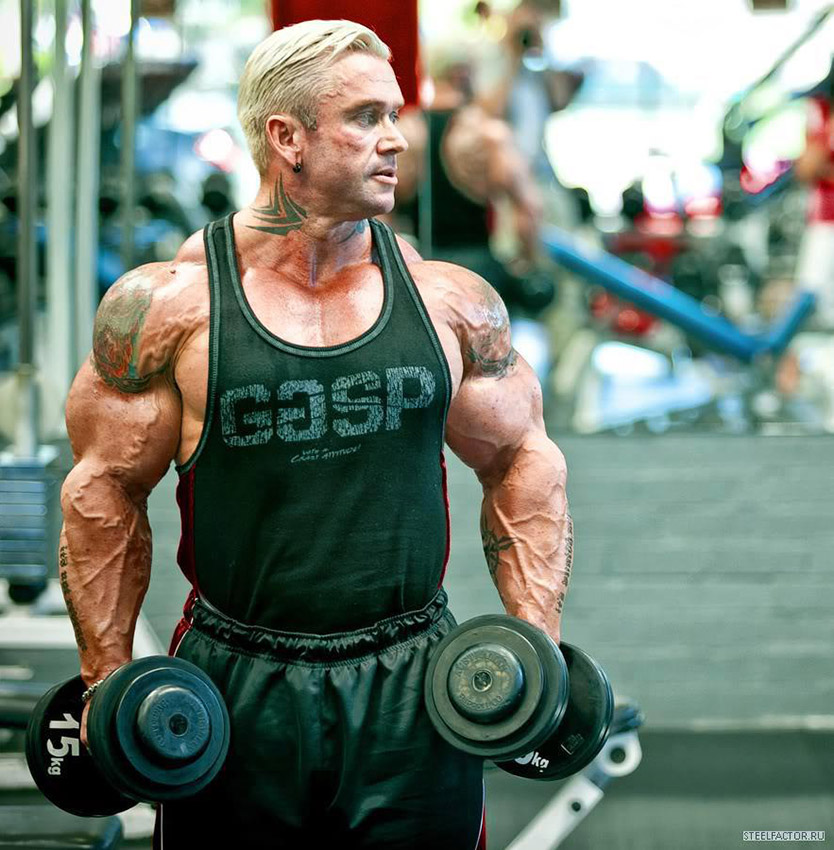 Lee Priest was born in the city of Newcastle, Australia, in 1972, and was raised in Walls End with his older sister. He went to Plattsburg Primary School, and since an early age he showed an interest in bodybuilding.

His mother (Lynn Priest) played a huge role in his interest in weightlifting – she was also a bodybuilding competitor. Priest was only 12 when he started training, and his grandfather also helped him with the basics.

Only one year after he started training, Priest decided to compete for the first time. After giving everything he had into training, he successfully won the 1986 Sydney Bodybuilding Classic, an event that was the beginning of an incredible career for the Lee Priest.

After he won his first show at the age of 13, Priest was hooked, this is when he knew it was something he wanted to do indefinitely.

Soon after, he competed in his second show and went on to win many other competitions during his teenage years. Eventually, he won the IFBB Mr. Australia 3 times in a row at the age of 17, 18, and 19.

Lee also competed at the IFBB World Amateur Championships, lightweight category, where he came in a respectable 4th place at 17 years old.

Due to his young age, Lee couldn’t win his Pro card in Australia, despite the fact he won The Mr. Australia title at the age of 19.

Because of the age restrictions in certain shows, Priest was forced to compete in other competitions, such as the Niagara Falls Championships. It was an amateur competition in which he entered and became widely recognized for the first time – this is where he earned his Pro card.

Winning his Pro card at the age of 20 was an event that marked Priest as one of the youngest bodybuilders to ever turn into an IFBB Pro.

After the success of winning his Pro Card, Priest continued to successfully compete in IFBB shows for the next 16 years.

The Australian later started to compete in The Ironman Pro, and after many attempts of placing second and third, it was at the age of 34 that Priest finally won the prestigious title.

However, Lee wasn’t only successful in The Ironman Pro – he also placed and won in numerous other competitions, some of them included the 2002 IFBB San Francisco Pro Invitational, where he took home 1st place, and 2nd place in the 2004 IFBB Ironman Pro, and 1st place in the 2005 IFBB Grand Prix Australia.

One of his most notable achievements is when he placed 6th in 2002 Mr. Olympia at the young age of 25. Lee’s impact on bodybuilding was seen across the world, and after many years, he had a contest named after him – The Lee Priest Classic. 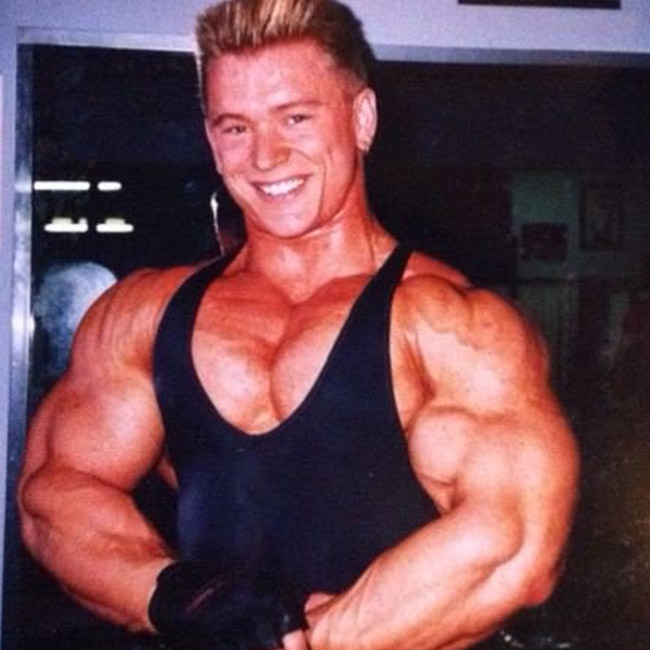 Priest wasn’t only a legend in bodybuilding, he also competed in car racing events. He had an impressive record when it came to track racing.

Besides winning numerous smaller races, Lee’s most notable achievements is when he won the Rookie of the Year in 2005, and SCEDA Racing Championship in 2006.

Lee was also a part of several TV and movie projects where he guest starred in podcasts and appeared in local Australian TV shows. Priest was also featured in various promotional ads.

The Australian is known for his honesty and openness about many controversial topics, which made him unique in the world of bodybuilding. He openly admitted the use of steroids, and even mentioned how, and, how much he would use. Priest is also an outspoken atheist. 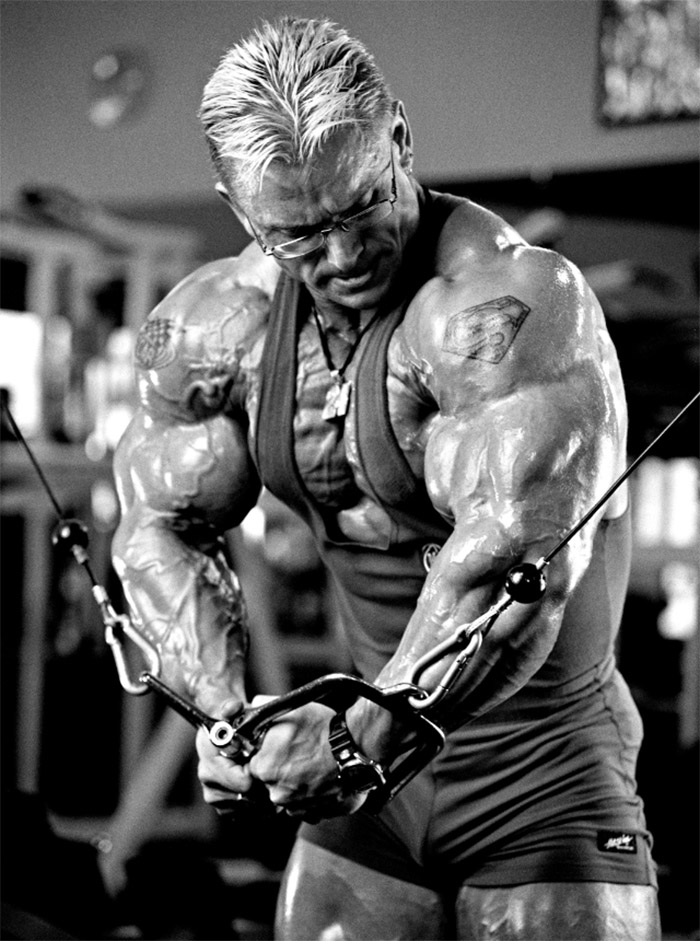 “I had a guy come up to me once in the gym when I’m training arms and tell me that I should do curls this way. I looked at his arms and they were about fifteen inches. That would be like me walking up to Tom Platz and telling him how to squat!”

However, Lee states some of the most important training rules he learned throughout training his entire body were learned when creating his huge arms.

Training a small muscle using heavy weight and high volume is mandatory for growth, according to Priest. He says there is a general misconception that small muscle groups need fewer sets.

Here’s Lee talking about the importance of high volume, no matter which muscle group he trains; “Don’t buy into the cop-out that small muscle groups need fewer sets. The more sets I do, the more I grow, so 20 sets for biceps is an embarrassing minimum for me.”

Rule no2 – Include standing barbell curls in every workout

Priest stresses the importance of including standing barbell curl exercise in every arm workout. He says that it’s a classic mass builder for biceps, and a go-to for everyone who wants to build huge arms.

Going for supersets straight after exhausting arms with straight sets is the best option to restore the pump and build additional mass, according to the Australian.

However, Lee admitted that it’s not something he would recommend to beginners. Here’s Lee’s advice; “Wait until you are intermediate or advanced before super-setting. Build mass, with straight sets first.”

Rule no4 – Include two-arm preacher curls in every workout

Priest said that including preacher curls with either a barbell or cambered bar is necessary in order to put the most stress at both ends of biceps bellies’ insertions, thus making the arms look fuller.

Rule no5 – Change your workouts

Lee believes that by constantly changing the workout routine, one can maximize his growth.

“Never give your body a chance to adapt.” 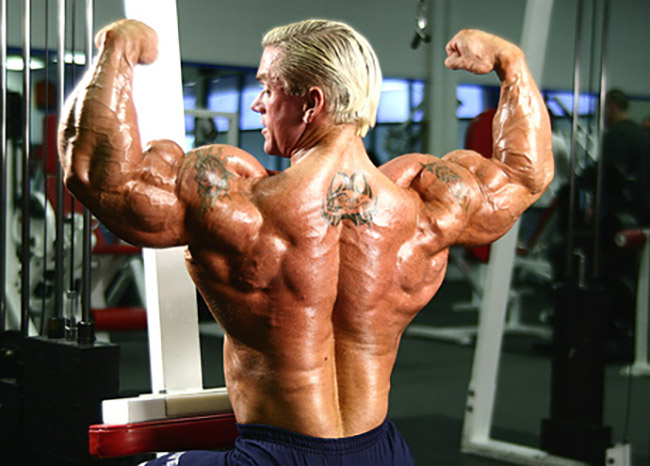 “I used cell tech once and I got the same pump when i ate a bowl of fruit loops and a kit kat. Go figure.”

When it comes to bulking Lee tends to gain around 75 pounds in his off-season bulking phase, and no matter how much weight he gains during the off-season, he’s always ready and in top shape on the day of the show.

Needless to say, when it comes to dieting, he eats clean and is strict about eating cheat meals. He says that cheat meals are his favorite part of dieting, but when he’s cutting, he almost never eats unhealthy. Priest also stresses that one should eat 6 full meals a day, every 2-3 hours for optimal strength gains. 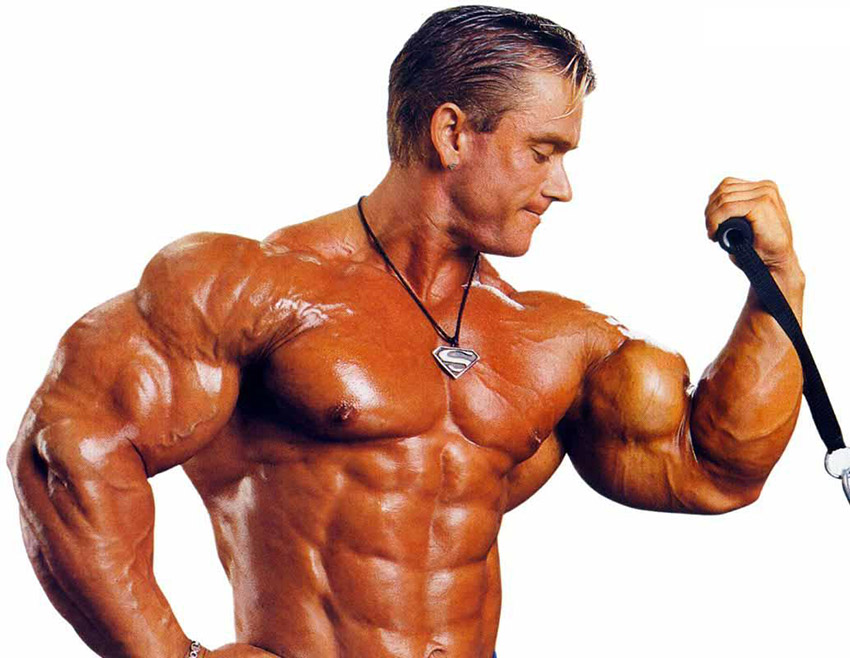 According to Lee, his favorite bodybuilders, and idols in general are Dorian Yates, Paul Dillett, and Nasser El Sonbaty.

Priest says that he has a lot of respect for the guys with the “freakier physiques” and that’s what he’s always tried to emulate. 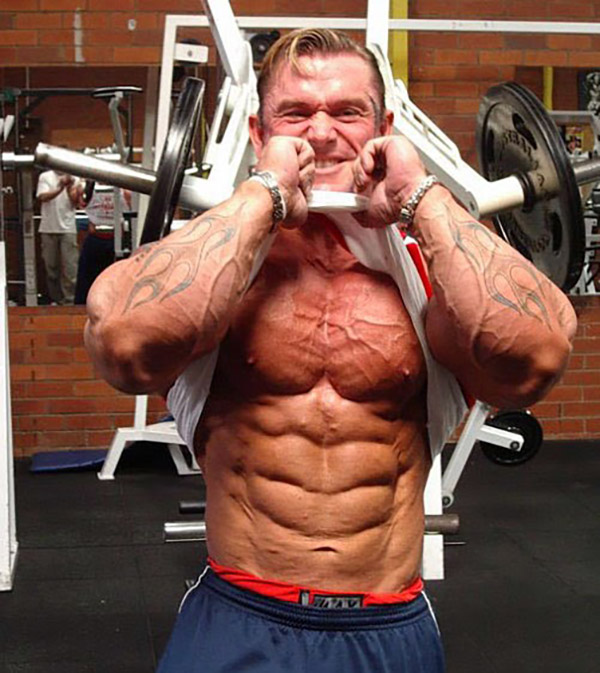 “My old 44-inch waist was the result of burgers, fries, and doughnuts.”

What we can learn from Lee Priest

Many bodybuilders in the industry don’t speak up when it comes to sensitive topics or don’t want to tell the truth in general, but Lee was different from the start.

He was always true to his character and never cared what people thought of him.

If there is one thing that we can learn from Lee, it’s to stay true to oneself. By staying true to yourself and not allowing opinions of others to affect your decisions can help you follow your dreams.

Back around 2000 Lee Priest did a “guest posing” at our Pasadena College Show. He and his “Mum”, sat with me and talked on the front steps of the auditorium. We were locked out, waiting for the doors to open (2pm), and were entertained by a “people friendly” bluejay. Lee Priest ‘s huge physique was amazing. But he was sometimes underrated by the judges. I remember how unfair it seemed that he could be fined thousands of dollars for speaking out against him treatment. He was genuinely one of the nicest “stars of bodybuilding” that I ever met.

Lee priest is an old school character, unfortunately we’re not likely to see any more bodybuilding stars cut from the same cloth. Honest and open with little interest in the bullshit and politics. One of the greatest of all time and a true gentleman.

R u no longer athiest?4 i C Uwear a cross with your (SUPERMAN) PENDENT. Your straightforwardness brings laughter to my person n at this time theres not much to laugh about.Your someone who brightens things and gives hope to life forwarding out of a painful 13years of confusion. PEACE GIVEGRAYLOVE4LIFE!!!! LORILYNN WMS??

My mentor and inspiration. Great arms and physique.

Lee is a great and honest human being. Many people may be offended by him because he doesn’t original. He trained hard and his form has always been the best. He is one of my favorite to watch whether he is training or just being interviewed. I love his since of humour. I keep bodybuilding because of role models like him. Stay true Lee from Siphesihle Thusi. South Africa