Zac Efron is a renowned fitness star, Hollywood actor, and signer originally from San Luis Obispo, California. Zac is known around the world for his blockbuster movie roles, such as Matt Brody in Baywatch, and Mike O’Donnell in 17 Again.

Alongside his acting career, Zac is also famous for his amazing fitness transformations. While filming for Baywatch, Zac followed a ‘no-stone left unturned’ approach towards his training and nutrition – doing whatever it took to get the best results.

After just 12 weeks of preparations, Zac achieved his goals for the movie. He carved out a chiseled physique at 5% body fat, leaving everyone in awe with his transformation.

With his blockbuster movie roles, remarkable physique, and larger than life personality. Zac has established himself as one of the most famous actors in Hollywood – here’s his story: 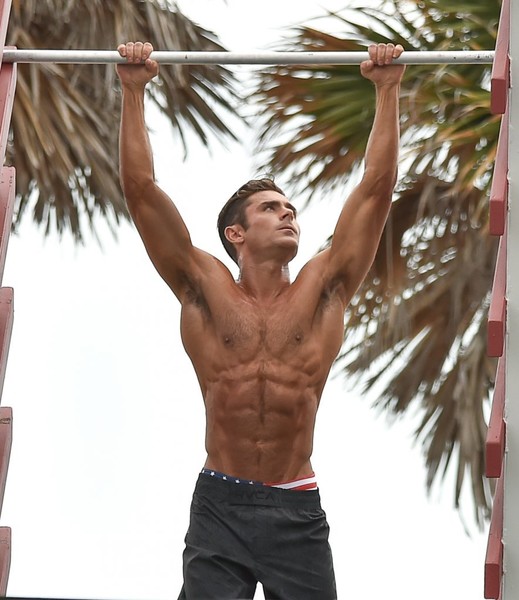 “Personally, I was never the cool kid. I was always sort of a bookworm. I would just like to be more like Troy, because he’s so cool.” 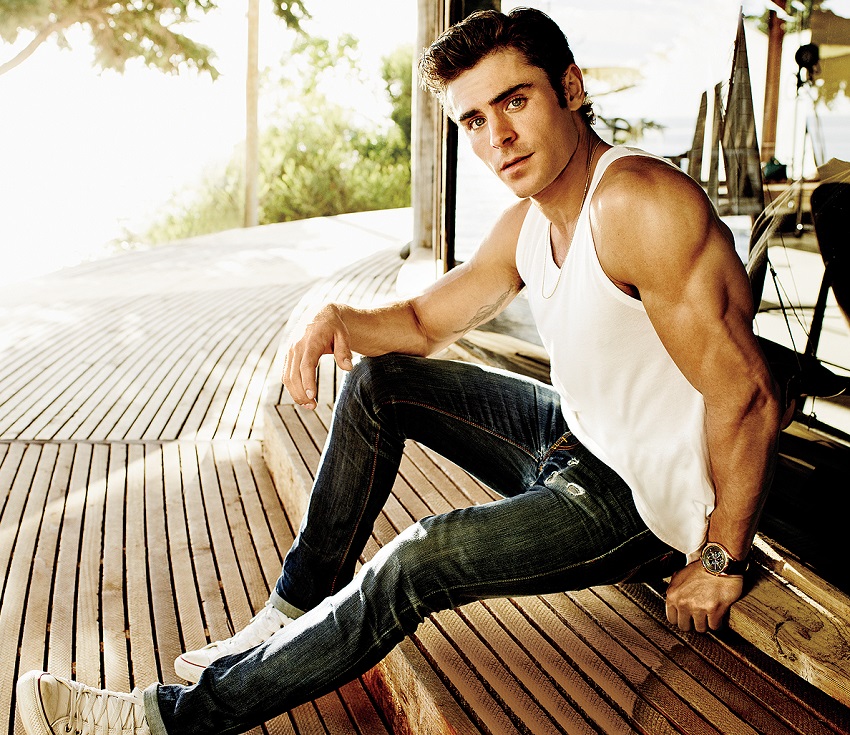 “I’m very competitive by nature. And I like to be the underdog – It’s the best way to win. To come from behind and win is a great feeling!” 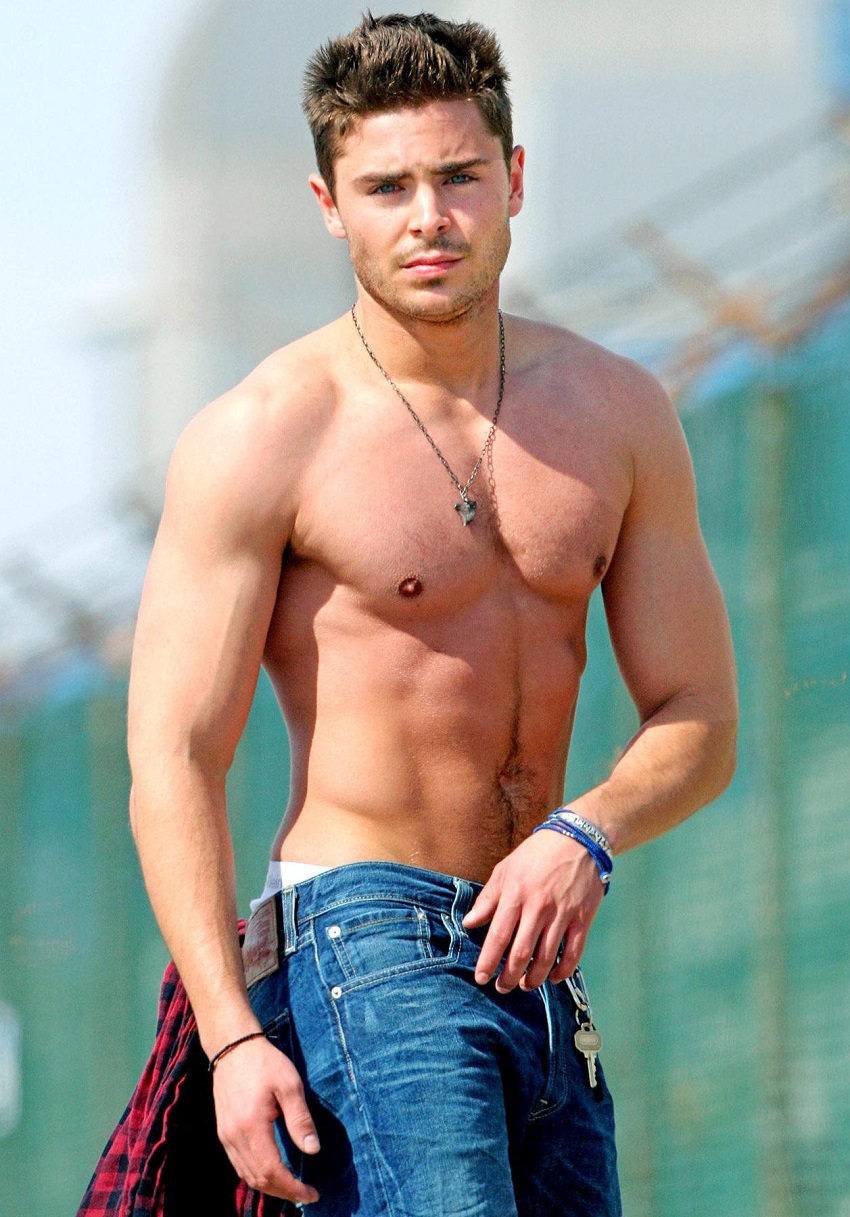 “I’ve been doing musical theater since I was a kid. And look for a CD from me in the future. I want to write all the songs!”

Zac Efron was born and raised in California, USA. He has a brother Dylan, father David, and mother Starla.

Growing up, Zac was extremely ambitious and hard working. He recalls being angry at himself every time he got a bad grade in school.

“I wore goofy hats to school and did musical theater. Most people thought I was a dork. But if you have a sense of humor about it, no one can bring you down.”

When Zac was 11, his father noticed that he had the potential to go a long way in the film industry. As a result, he encouraged Zac to begin acting.

Listening to his father’s advice, Zac took up acting in high school theaters and different productions. He also began taking signing lessons – music and singing were something that Zac was passionate about from an early age. 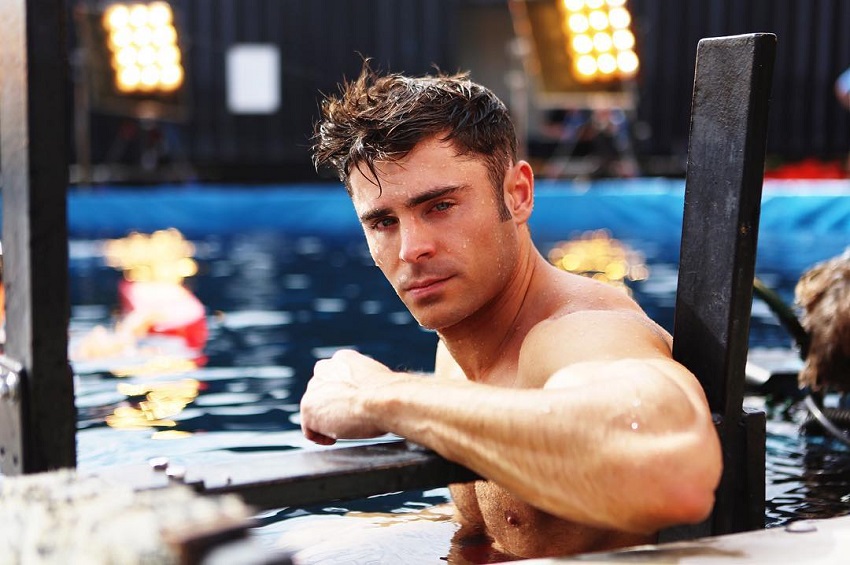 Because of his awesome acting and singing performances, Zac was soon noticed by Robyn Metchik, his drama teacher.

Impressed by Zac’s acting, Robyn went on to recommend him to different agents in Los Angeles. As a result, Zac was soon signed to a high-profile creative artists agency.

Zac’s Rise Within the Film Industry

After graduating from college, Zac began devoting all of his time to acting. He had some of his first guest roles in different TV series, including Er, The Guardian, and Firefly.

As Zac’s acting career progressed, he began appearing in more popular movies and TV shows. Such as Lifetime, and Miracle Run, where he was nominated for the Young Artist Award.

While this was already a huge success for Zac, his best was yet to come.

It was in 2006 when Zac’s acting career reached a turning point. That year, Zac performed in a teen musical TV movie, High School Musical. The movie became a huge success, with Zac Efron becoming a well-known name on the big screen.

The following year, in 2007, Zac appeared in yet another successful movie called Hairspray.

Several months later, he took part in the sequel of High School Musical movie, where he once again played his famous role of Troy Bolton.

The movie aired on the Disney Channel in late summer 2007 and became a huge success once again – propelling Zac’s career to even greater heights. 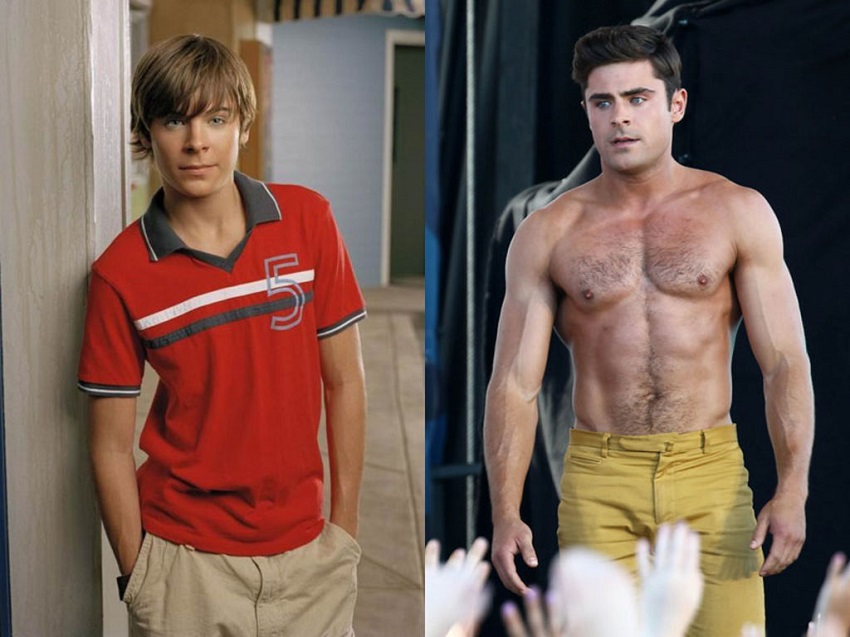 Between 2009-2014, Zac made a name for himself by appearing in highly successful TV shows and movies, including;

The Peak of His Career

By 2014, Zac Efron’s career was in full swing. He appeared in famous comedies, dramas, and music videos, establishing himself as one of the most renowned actors in Hollywood.

One of Zac’s most successful movies to date is Baywatch, where he starred along the likes of Dwayne “The Rock” Johnson, Kelly Rohrbach, and Alexandra Daddario. 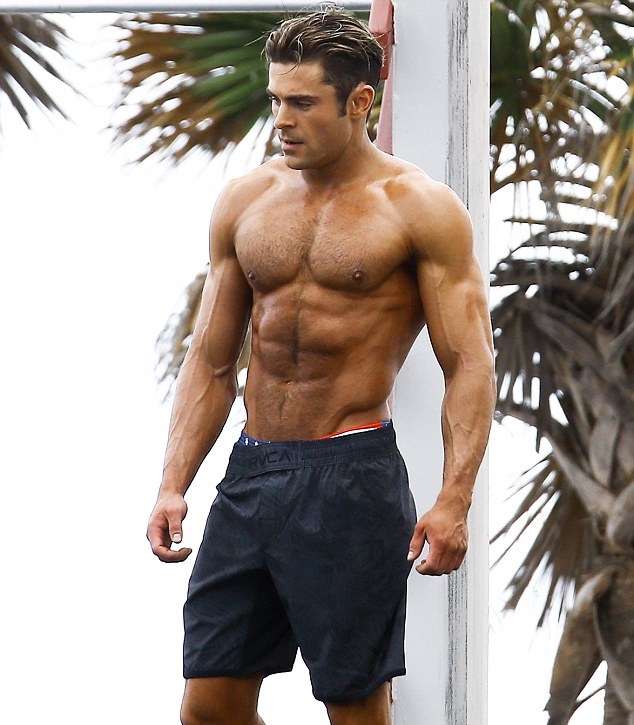 Although Zac boasts a successful career, his way to the top wasn’t easy. Throughout everything, Zac had moments where he struggled with alcohol and substance addiction.

In 2013, Zac decided to seek help to beat his addictions once and for all. After numerous ups and downs, he was eventually able to overcome this dark period in his life. 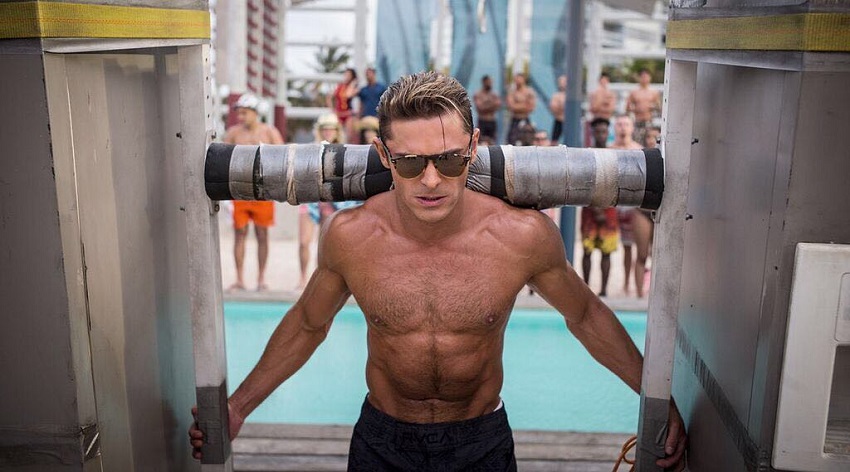 “I was influenced when I was younger by the cartoon movies that Disney put out, like Cinderella and what not. I watched those movies over and over when I was younger and the music is ingrained in my head. Nowadays, I’m still humming the tunes. It taught me the fundamentals.”

Zac Efron’s workouts for Baywatch were constantly evolving. His coach created a three-day workout split, where Zac trained legs on one day, back and biceps on another, and arms, shoulders, and chest on the third day. Zac also trained his abs every day to keep them conditioned.

The principal feature of Zac’s workouts were supersets. This means Zac would do two exercises back-to-back without any rest. By doing this, Zac not only saved his time, he also burned more calories and improved his pump – enabling fast muscle growth.

However, not all of Zac’s exercises were focused on muscle hypertrophy. Since Zac played a lifeguard role in the movie, it was also important for him to do explosive exercises to improve his agility and speed.

By combining these training techniques, Zac was able to build a physique that was both aesthetic, and functional. 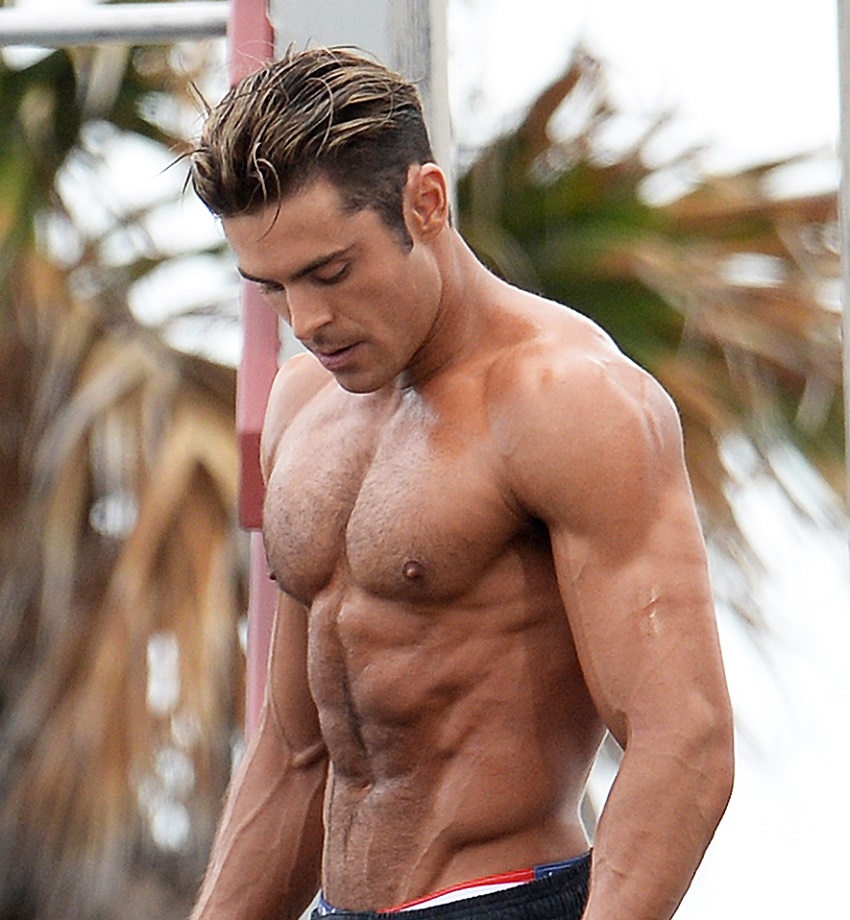 Day I: Back and Biceps 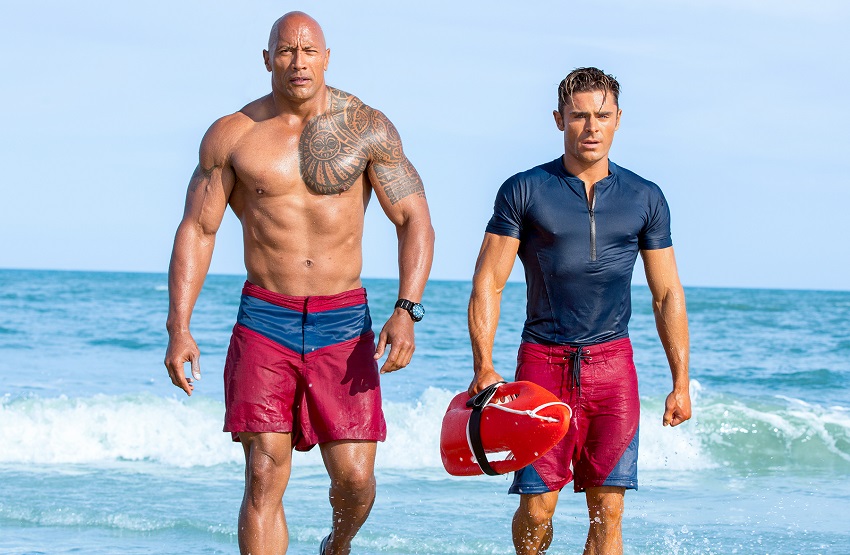 Zac Efron on the beach with Dwayne “The Rock” Johnson.

“One time I went into a restroom and a girl followed me in. I signed an autograph for her in the sink. It was pretty funny because she was in a guy’s restroom and she wasn’t embarrassed at all.”

In order to sculpt his physique for Baywatch, Zac had to follow a strict, whole-food based diet. He avoided anything that was refined or processed, including flour and sugars.

For example, Zac could eat quinoa, but he wasn’t allowed to eat quinoa crackers. He could eat brown rice, but not brown rice pasta. Whatever food he ate, it had to be 100% organic.

Overall, Zac was allowed to have a cheat meal once per week. For the most part, his diet consisted of;

For supplements, Zac only took whey protein. He made sure that the protein was ultra-filtered and unflavored, without any additional ingredients. 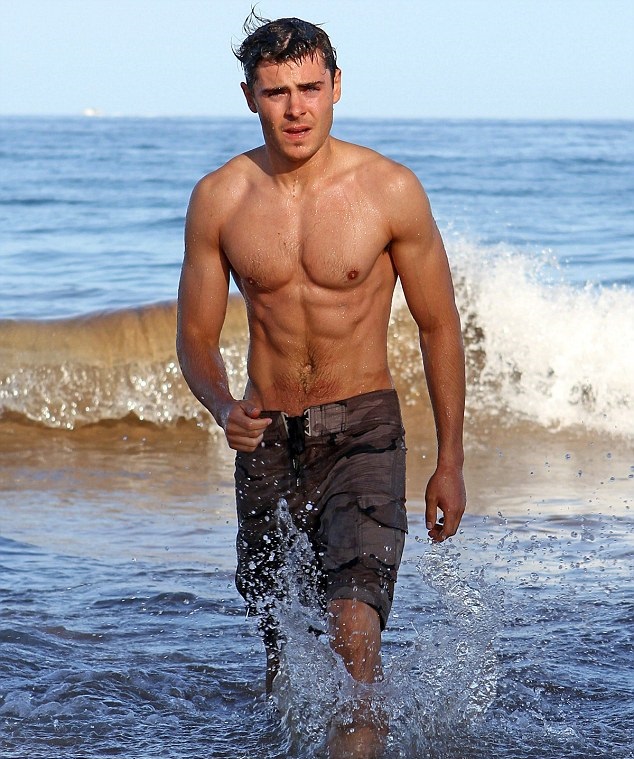 “I might not be the greatest actor, but I walk into every project willing to work hard.”

Zac Efron is not only an inspiration for people who watch him on TV. He’s also a huge influence for fitness enthusiasts who want to build a physique as great as his.

Zac’s awe-worthy body transformation, which showcases how much effort it’s needed to build a great physique, is one of many contributors to his immense popularity amongst generations of people. 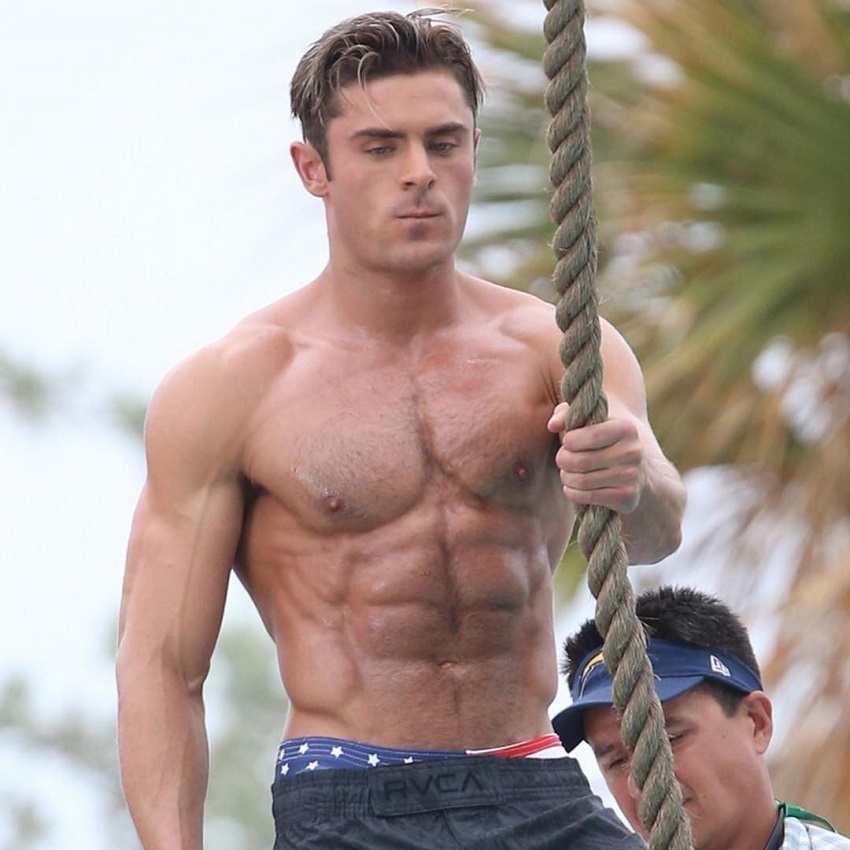 “I know I’ve been lucky. But it’s what you do with that luck afterwards that really defines whether you stick around.”

What we can learn from Zac Efron

Looking through Zac Efron’s career and his accomplishments, there’s one thing that makes him as successful as he is today – a constant thirst and desire to achieve greatness.

From acting in blockbuster movies, writing and singing songs, to achieving jaw-dropping fitness transformations. All of this was a result of Zac’s incredible drive to push forward and see how far he could go in life.

Ultimately, if there’s only one thing that we can learn from Zac Efron, it would be; the influence we have on others matters more than glamour and riches.

I never knew any of these things about Zac Efron. He is so cute and a great role model! I just have a question,: Who is he currently dating?

165-175 pounds ? That seems a bit low. Mike Tyson is about the same height and has a similar build and weighs 218 pounds. I would be surprised if Zac was less than 210.

Awesome singer, better actor. Sexy as hell. My future husband, I hope. Lol. Some actors/actress’ date regular people. Would be awesome if he were also part of The Greatest Showman 2, not just Hugh Jackman