Zac Aynsley AKA Mr. Biceps is a famous British fitness model, personal trainer, and a TV personality known for his impressive biceps. However, Zac wasn’t always the model of strength he is today.

In his childhood and throughout his teens, he was underweight, malnourished, and ate a very poor diet. While in high school, he suffered from bullying from the way he looked, which caused Zac depression and anxiety growing up. After years of poor eating habits, he eventually found out about weightlifting, which helped him channel his focus and energy into something positive.

Through hard work and sacrifice, Zac managed to build an incredible physique, and has since become a fitness sensation. He gained a lot of recognition for his story, and has inspired people everywhere to transform their own lifestyles. 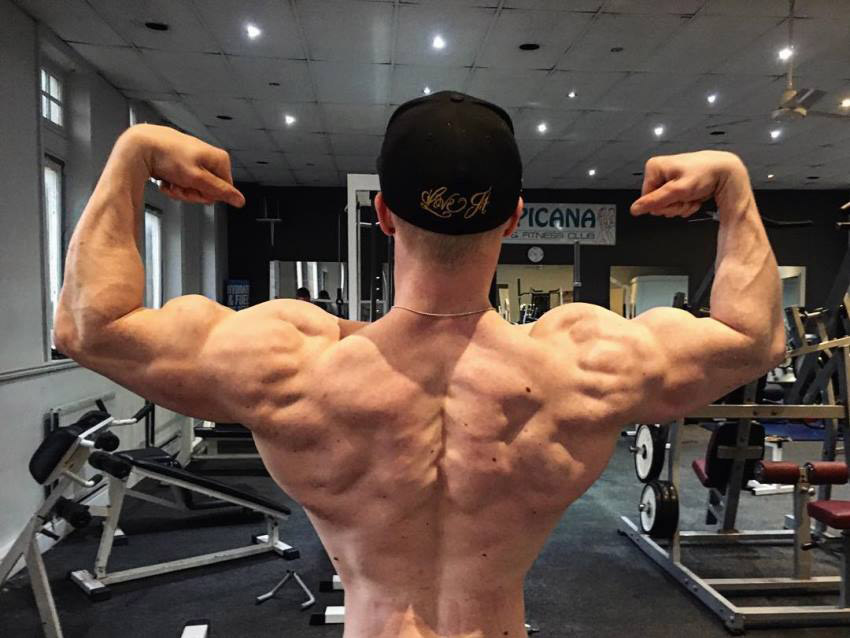 “Live life to the fullest, take risks, do what makes you happy! Do it now before it’s too late.” 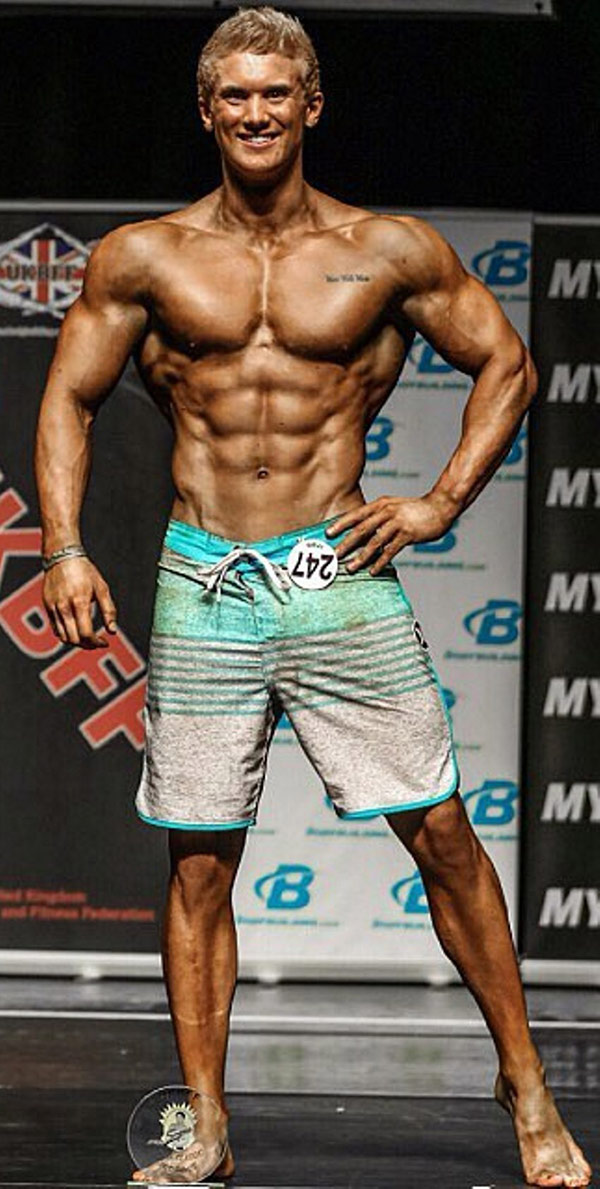 “Go ahead, tell me that I’m not good enough. Tell me I can’t do it! Because I will show you over and over again that I can, and trust me… I will.”

Since creating his social media profiles, Zac has attracted a huge number of fans who’ve been motivated to get in shape. He’s also been a cover model for several reputable magazines, and was featured in some of the well-known TV shows from the UK. 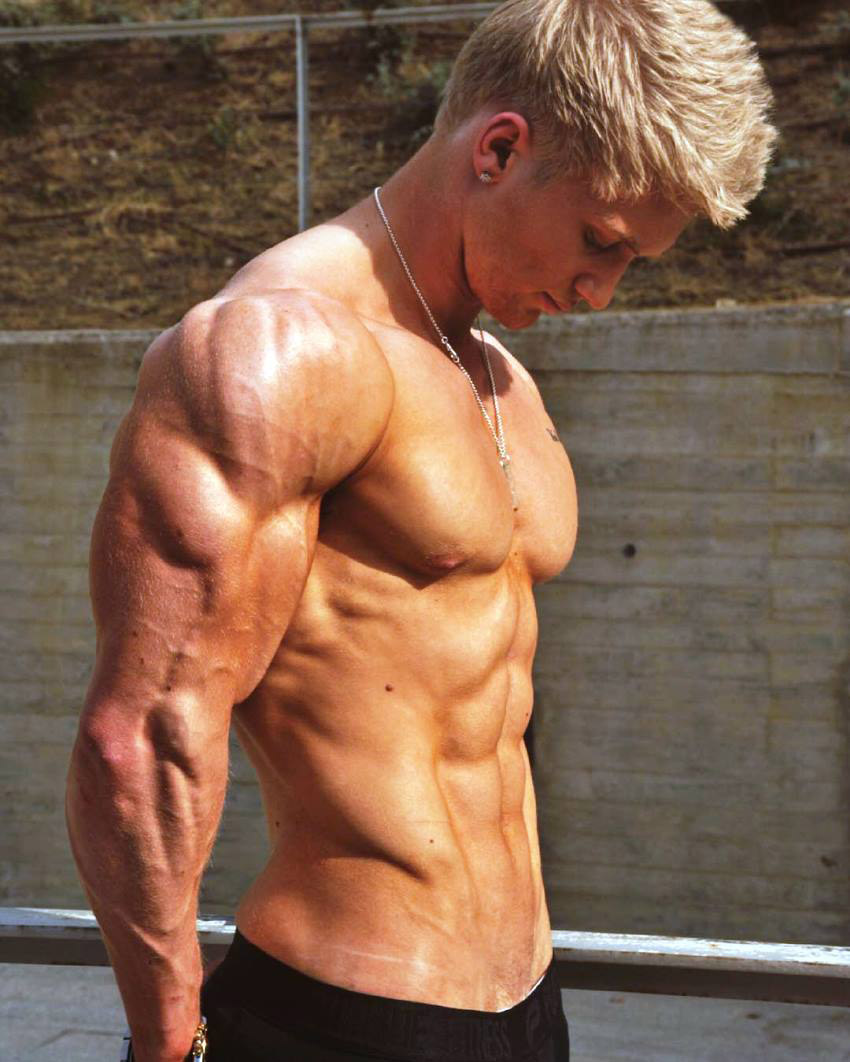 “Warriors are not born and they are not made… Warriors create themselves through trial and error, pain and suffering, and their ability to conquer their own faults.”

Zac Aynsley was born on July 2, 1994, in Northumberland, England. Growing up, Zac was never an athletic child, and his diet was quite unhealthy, which consisted of sweets and processed foods. Because of his unhealthy eating habits, Zac was underweight, and would often receive negative comments from his classmates who ridiculed him for his looks. He said;

“My whole life, I have always been put down and told I was a loser. I was badly bullied and cried countless times because people would laugh at me for the way I looked.” – Zac Aynsley

Because of the constant bullying he had to endure, Zac would suffer from panic attacks throughout the day, which ultimately created a lot of tension and anxiety in his life.

During that time, Zac wasn’t physically active – most of his free time would be spent playing video games, where he used them as an escape from reality. One day, he received a proposal from a friend to become a DJ. This  immediately sparked interest in Zac, and quickly decided to try it out to change his monotonous lifestyle.

At the age of 15, Zac started DJing for local clubs and quickly became popular. He started earning a little bit of extra money, and was also gaining more positive attention from the people around him, which made him feel more confident as the years passed. It wasn’t long before he was invited to participate in many different events outside his hometown. He soon started touring the country.

Even though he was becoming successful in his career as a DJ, Zac had to return home to finish college. When he came back to Northumberland, Zac was in the worst shape of his life. Because of all the partying and unhealthy habits he cultivated during his touring and late night lifestyle, he became extremely unhealthy.

To check everything was okay with his health, he went to the doctors to have his bloods checked, and it turned out his internal organs were deteriorating due to his reckless lifestyle.

According to Zac, the doctor told him that he had a liver of a 50-year old, and he needed to change his habits drastically if he wanted to live a long and healthy life.

He soon got his first gym membership, and started training with dedication and discipline like never before. He also made sure his diet had enough calories and nutrients to recover the body, which was something new to Zac. After only a couple of weeks, Zac was already seeing progress with his physique, and couldn’t believe that he was getting bigger and stronger.

At this point, Zac said he was completely hooked to his new lifestyle, as he continued working out harder than ever. 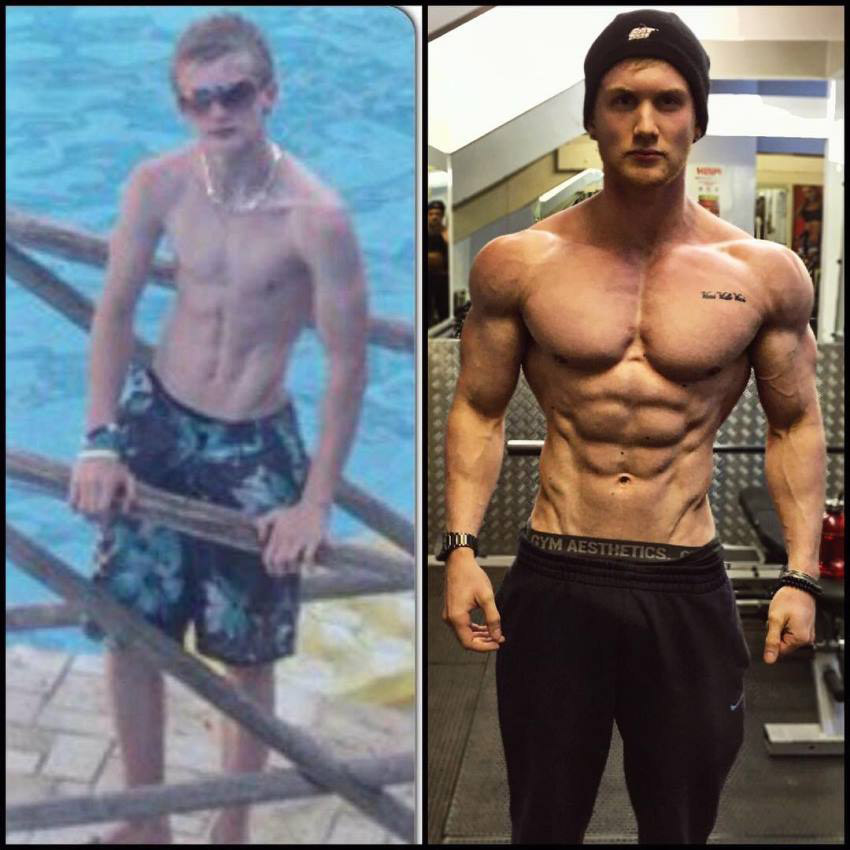 Zac before and after.

After some time, Zac gained a lot of knowledge on nutrition, and it wasn’t long before he started seeing impressive results.

He managed to sculpt such a physique that one of Florida’s top photographers contacted him and asked if he wanted to do a photo-shoot. Needless to say, this was a turning point in Zac’s career. He quickly agreed to the proposal and flew to Florida and took his chances.

After 7 weeks of shooting, Zac’s life completely changed, according to him, he started receiving recognition from some of the most influential people in the fitness industry, including Arnold Schwarzenegger who told him that he had great arms, and Phil Heath who commended on the youngster’s determination.

“For years I had people telling me I was worthless, but here was The Terminator telling me I looked great. It meant the world to me.”

When he came back from Florida, Zac started focusing on his fitness career. His popularity blew up once he started posting pictures of his sculpted physique on social media.

He became an internet sensation after uploading a video of his transformation and background story, which attracted a large number of followers who were inspired to take on challenges in their own lives.

Ever since the beginning of his fitness journey, Zac has traveled to over 17 countries, competed in a men’s physique show, and has been featured in over 10 TV shows, as well as billboards across the world.

He’s also been a cover model for several well-known magazines, and is continuously growing in popularity, inspiring people everywhere with his incredible transformation. 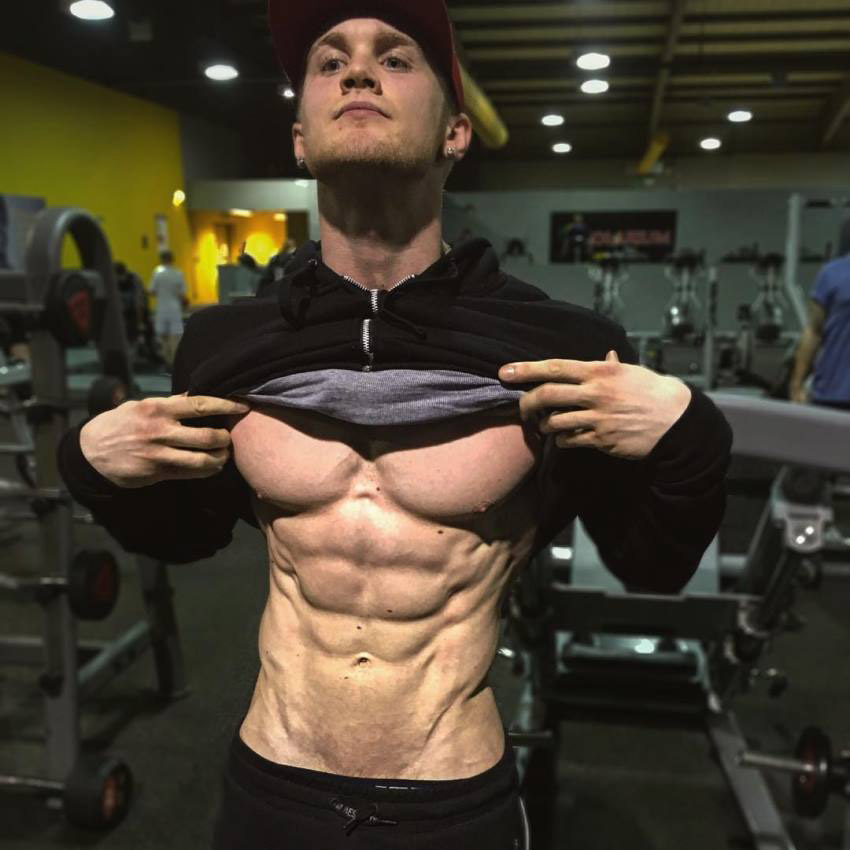 “Some people will try and bring you down when they see you changing, evolving and becoming better ! It is because somehow they have to make themselves feel better because they LACK the willpower to consistently do what you’re doing! ignore them ! Like a wise man once said, ‘hatters gunna hate.”

Unlike other athletes, Zac has to train twice as hard due to his fast metabolism and ectomorph body type.

He usually advocates short, but intense training sessions, which means a lot of volume, heavy weights, and short rest periods between the sets.

When it comes to cardio, Zac doesn’t need to do it often since his body naturally burns body fat efficiently. However, if he is preparing for a competition, Zac says he will incorporate cardio few times a week to get in the best possible shape.

Zac is known as Mr. Biceps, which he got because of his incredible arms development. According to Zac, his favorite exercise is biceps curls, preferably done with a barbell.

Some of the other exercises he likes doing are skull-crushers, triceps cable push-downs, close-grip bench press, incline bench press, and squats. 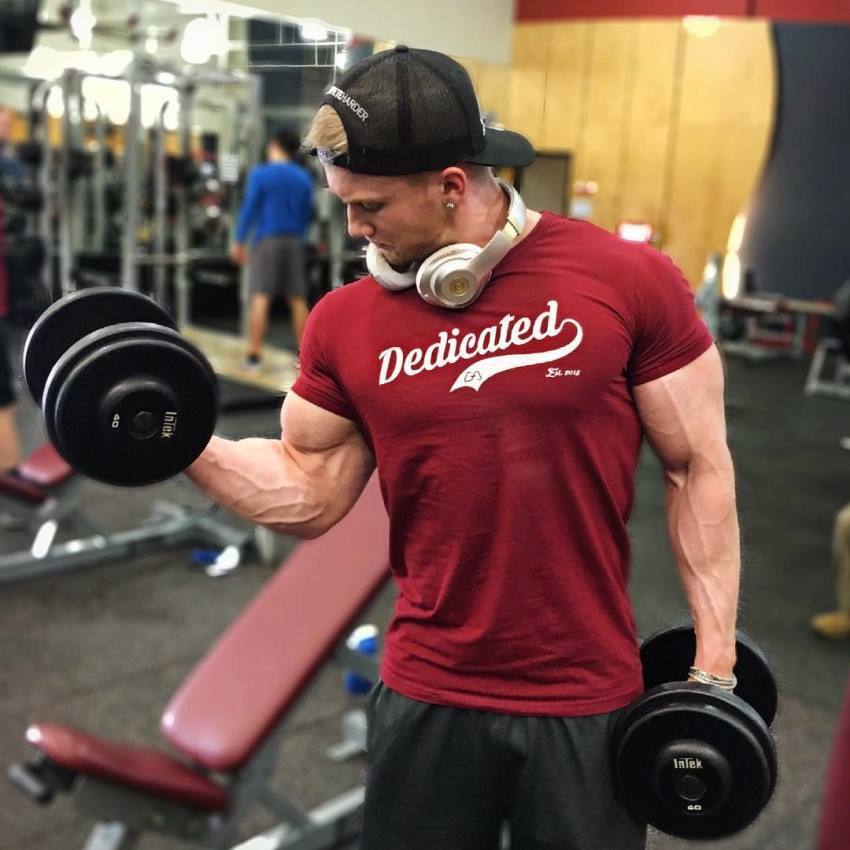 “Train harder than everyone around you! Eat like a king. Stay consistent with your diet / training. Don’t make excuses. Stay positive and never quit. If I can do it, you can too.”

The most important part of Zac’s diet regimen is getting enough quality calories, according to him, he eats between 3200-4000 calories a day, depending if bulking or cutting.

For proteins, Zac usually consumes lean meats such as chicken and red meats, while rice, whole-grain pasta, vegetables, and fruits make up his carbs. Lastly, as a source of fat, Zac consumes olive oil, nuts, and occasionally, peanut butter.

When it comes to cheat meals, Zac allows himself one or two, but he likes to stay lean throughout the whole year, so he avoids overeating too often. 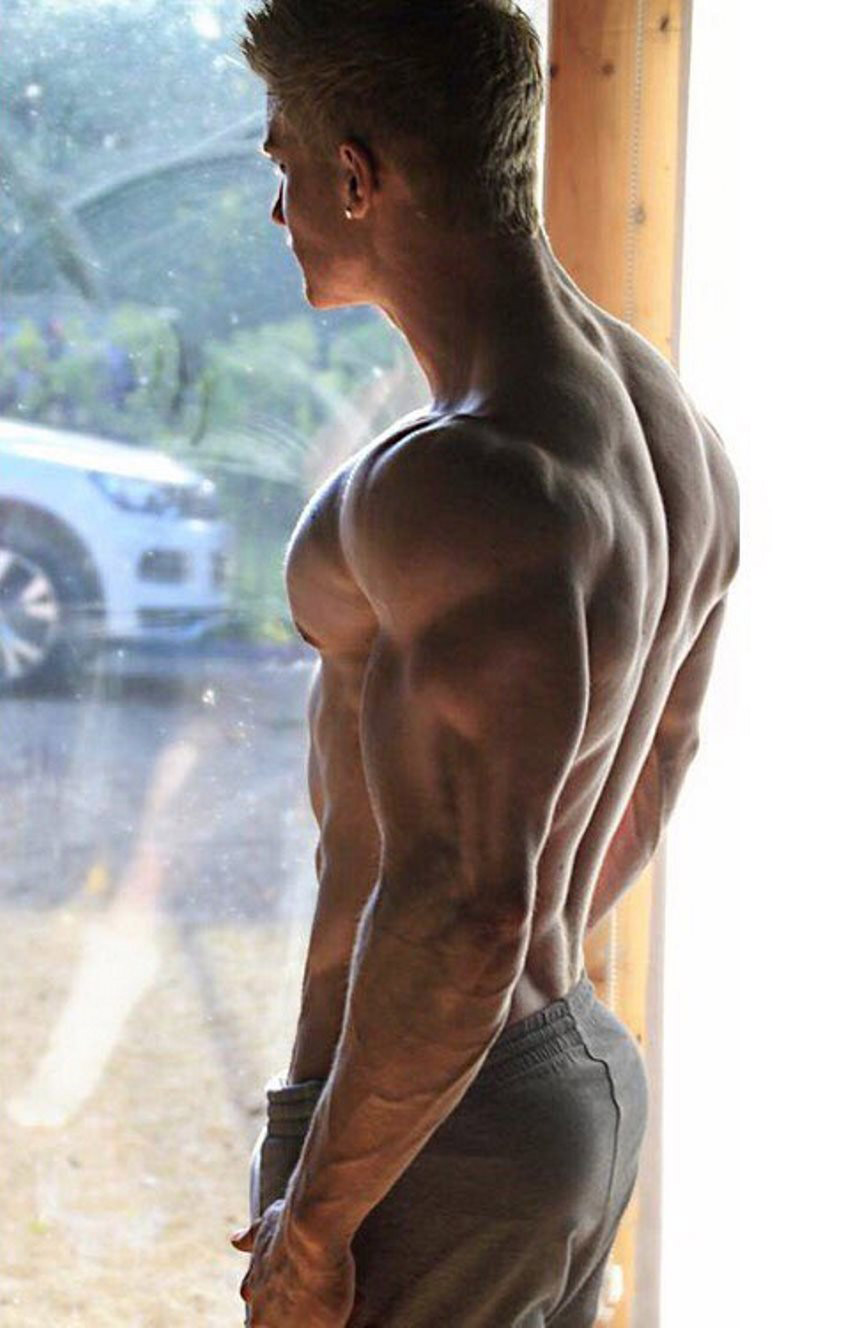 Arnold Schwarzenegger has been one of the main influences in Zac’s life, according to him, Arnold inspired him to start lifting weights and completely transform his life. He eventually he met the man himself, who told Zac that he looked great, which boosted his confidence even further. 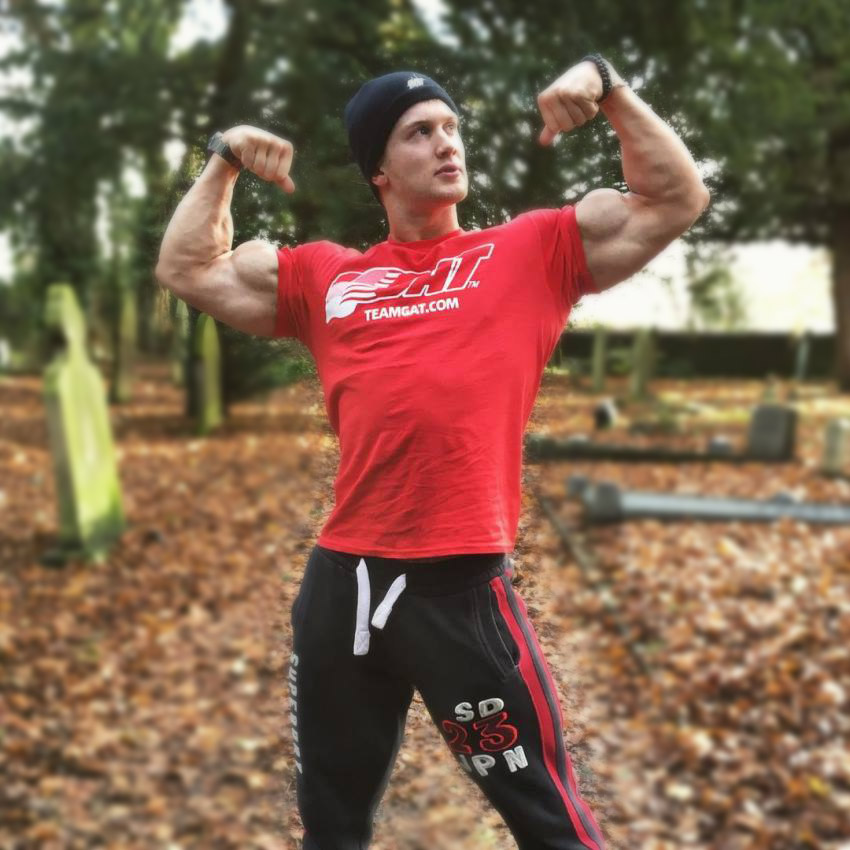 “People may hate you for being different and not living by society’s standards, but deep down, they wish they had the courage to do the same.”

What we can learn from Zac Aynsley

Throughout his entire childhood and teenage years, Zac was verbally bullied and put down because of the way he looked. His determination and willpower allowed him to transform his body and mind despite the adversity he faced.

He used weightlifting as a way to escape the negativity he was in, and became famous and successful because of it.

Never letting anyone destroy your dreams is something we can learn from Zac. Following Zac’s rules and will power is a way you too can make your goals into a reality.

He is so confident. I really look up to his level of self-esteem

He is the greatest man l would like to be like him He is my role model!!!
Love you bro!!!!!

Not freaking natty, ectomorphs can’t get anywhere near that big. Most guys with good genetics won’t look like that. I wonder what he takes. Prolly sarms and test. He’s as natty as jon skywalker lol.