Tomas Echavarria is fitness athlete and certified personal trainer from Miami, Florida. Growing up, Tomas spent most of his youth playing competitive sports.

By the time he was 16, Tomas discovered weight training. Taking full advantage of his competitive background, Tomas put a tremendous amount of determination in his fitness journey – sculpting a strong and ripped physique along the way.

Ever since then, Tomas has gone from strength to strength where he’s become an online icon, who helps people around the world in achieving their goals.

This is Tomas’ story: 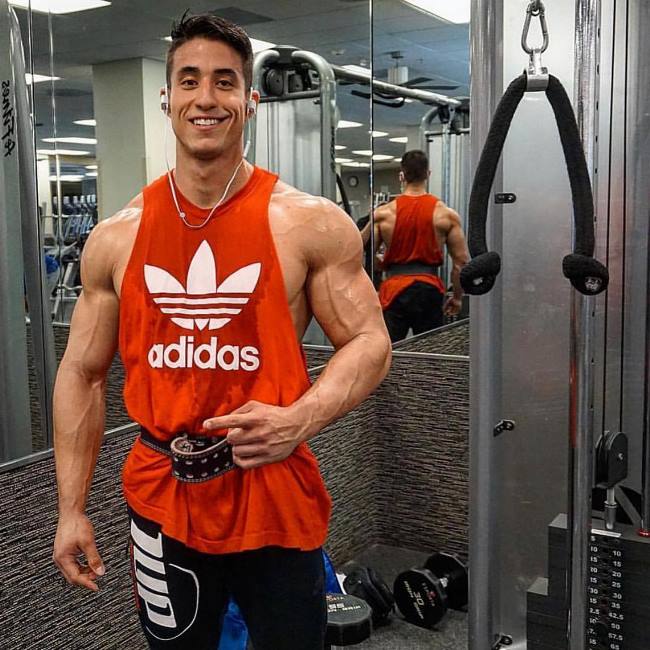 “I get asked all the time: Which is the best diet? There is no such thing as the best diet. Everyone’s body responds differently to certain diets. You would have to try each one individually to find out what works best for you.” 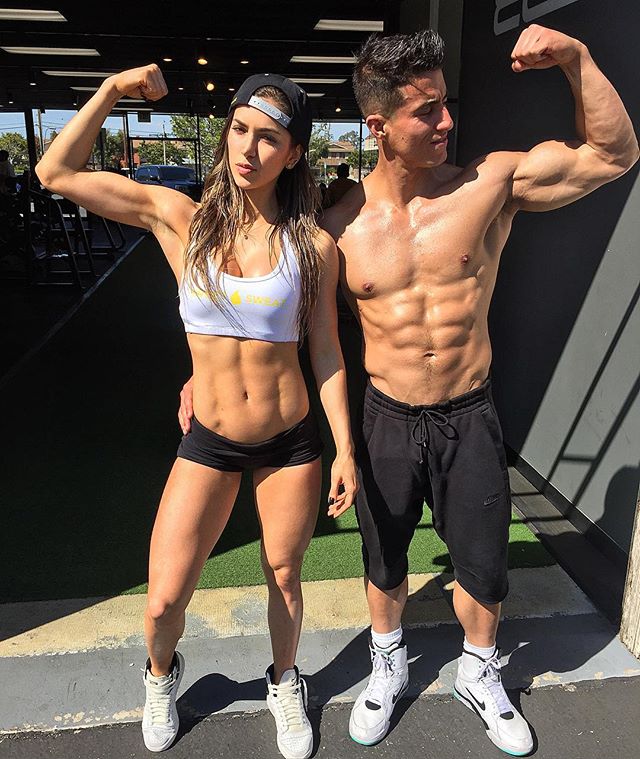 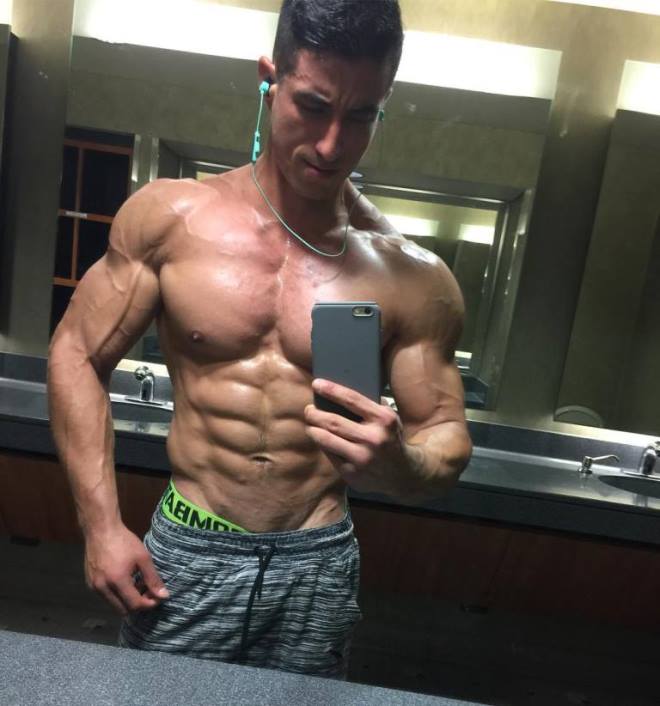 “A great body starts from the inside. Figure out what works best for you, what you can stick with, and what you can and cannot eat.”

Hailing from Miami, Florida, Tomas Echavarria was an athlete his whole life. Tomas says, throughout his early years, he played “every sport imaginable,” being particularly interested in tennis.

Tomas continued playing tennis for some time, encouraged by his father who was also an avid tennis player. However, after the age of 12, Tomas’ passion for the sport slowly began to die off.

It wasn’t only tennis that Tomas began losing interest in, he also became worn out from other competitive sports that he played. He said;“I can say I was worn out at a young age. However, my competitive drive still lived within me.”

Following His Passion for Weightlifting

Then, at the age of 16, Tomas discovered weightlifting. He says, although he was highly competitive and had a strong mentality, he lacked size and strength. Because of this, Tomas signed up for his first gym membership and began training with weights.

“I just always had a desire to impress people. Also, I felt like lifting weights put me in this place of freedom.”  – Tomas Echavarria

Devoting all of his time to weightlifting, he showed the same determination that he had when playing competitive sports. This enabled Tomas to quickly progress in strength and size, successfully doing so after months and years of hard work. 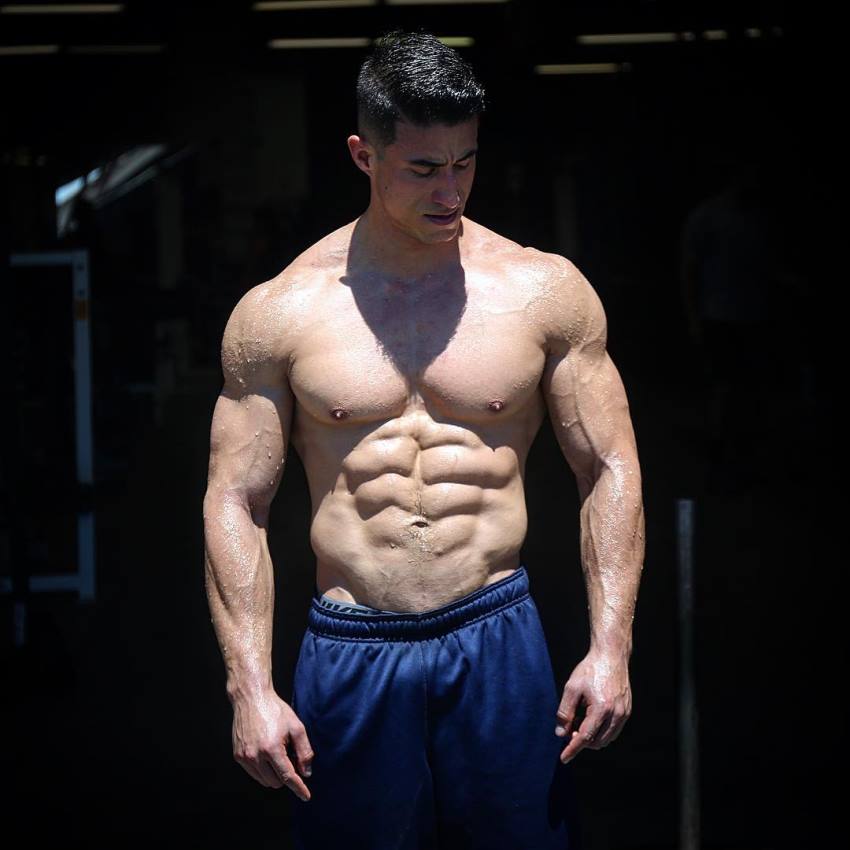 After he built a formidable physique, Tomas became inspired to help others achieve the same results. With this new found passion, he went on to enroll at the Florida International University to study exercise kinesiology.

During his time in college, Tomas learned a lot about human anatomy, as well as training and nutrition. After several years, he graduated from university with a full degree under his belt.

It was at this point Tomas was certain that he wanted to become a full-time personal trainer. He went on to earn a NASM certification in personal training. This, in turn, enabled him to train clients in the gym.

In 2013, Tomas took his knowledge and experience to the next level. He went on a mission to reach as many people as possible through social media, helping them live a healthier lifestyle.

Because of his efforts, Tomas’ excellent work in the fitness community was rewarded. He gained the status of an online fitness icon, allowing him to make a living out of his passion. 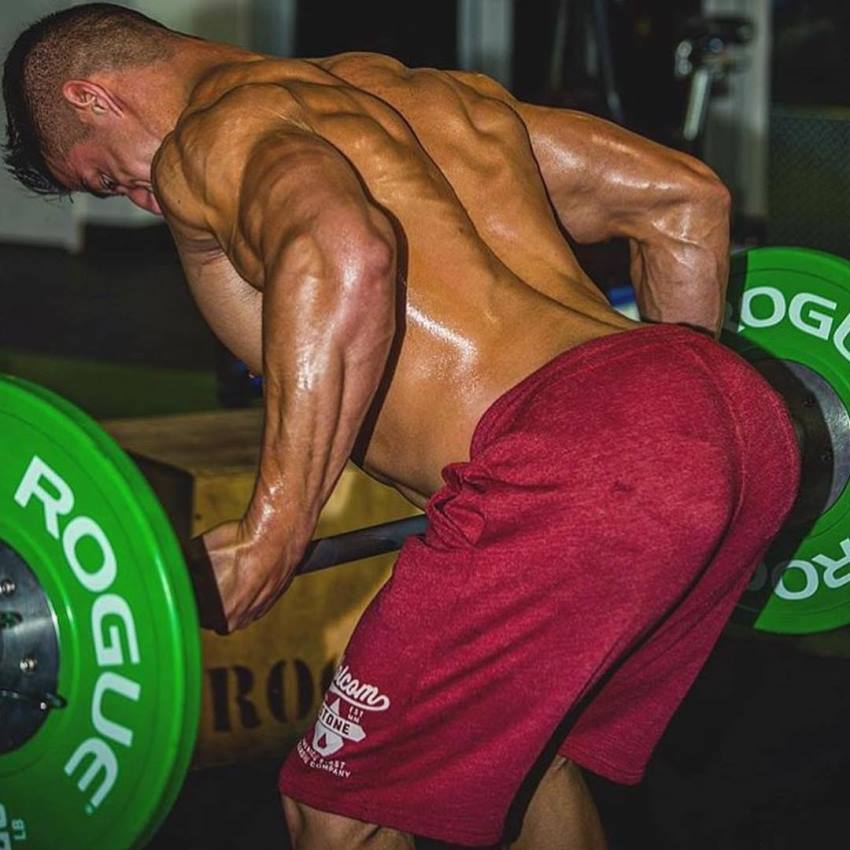 Tomas hasn’t stopped working on his goals ever since he started his journey, saying: “I don’t work my ass off day in and day out in order to take a backseat. I will continue to do the same until the day I’m no longer here.”

Today, Tomas’ main focus in his career is expanding his influence and “touching as many people’s lives as possible.” 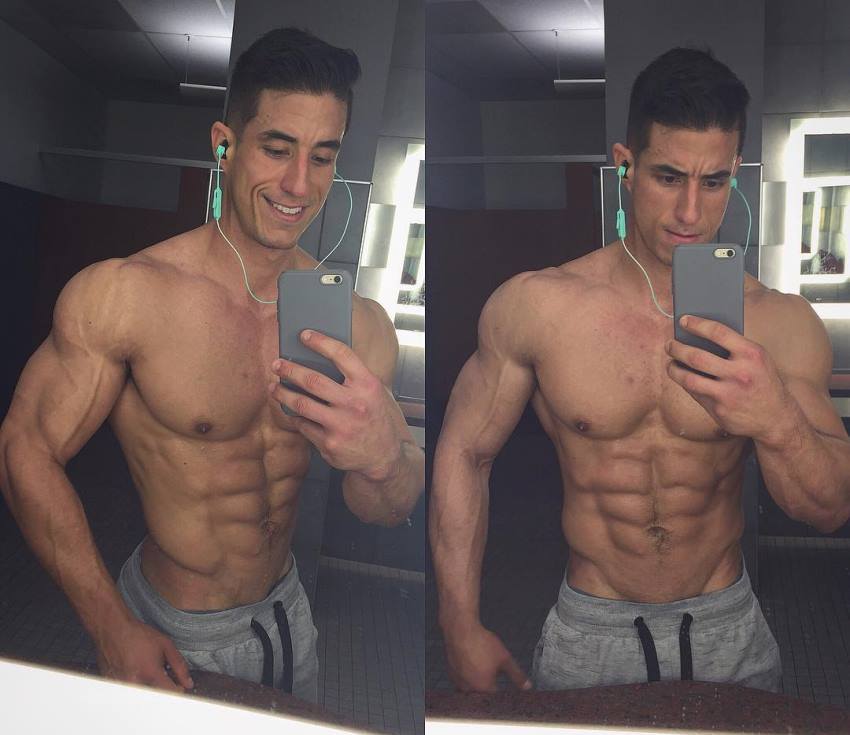 “Stop thinking you need meat and rice or meat and broccoli to achieve a great body. A great body starts from the inside. Learn to add fruits and vegetables.

Tomas works from 5 A.M. to 8.30 P.M. every day. Even though he has such a busy schedule, he still finds time to go to the gym and train with intensity.

It’s thanks to this mentality that Tomas was able to sculpt his incredible physique – showing everyone how a lack of time is never an excuse not to workout.

In Tomas’ opinion, both fasted cardio, as well as fed cardio, are effective for fat loss. However, both have their own advantages and disadvantages.

Tomas says, when doing cardio in a fasted state, the body uses its own stores for energy. For some people, this can be their body fat. However, Tomas believes some people will start burning muscle mass instead of fat when doing fasted cardio. Because of this, he advises fasted cardio only to those people who know how their body works.

When it comes to doing cardio in a fed state, it is a different story. As Tomas says, the downside of fed-state cardio is that the body will use the energy from consumed food. However, Tomas also says that by doing high-intensity cardio such as sprints, it’s possible to stimulate the central nervous system to speed up the metabolism – resulting in an indirect fat loss.

“Those who cannot find the time to do cardio in a fasted state, the best alternative, in my opinion, would be to perform your cardio after your workout.” 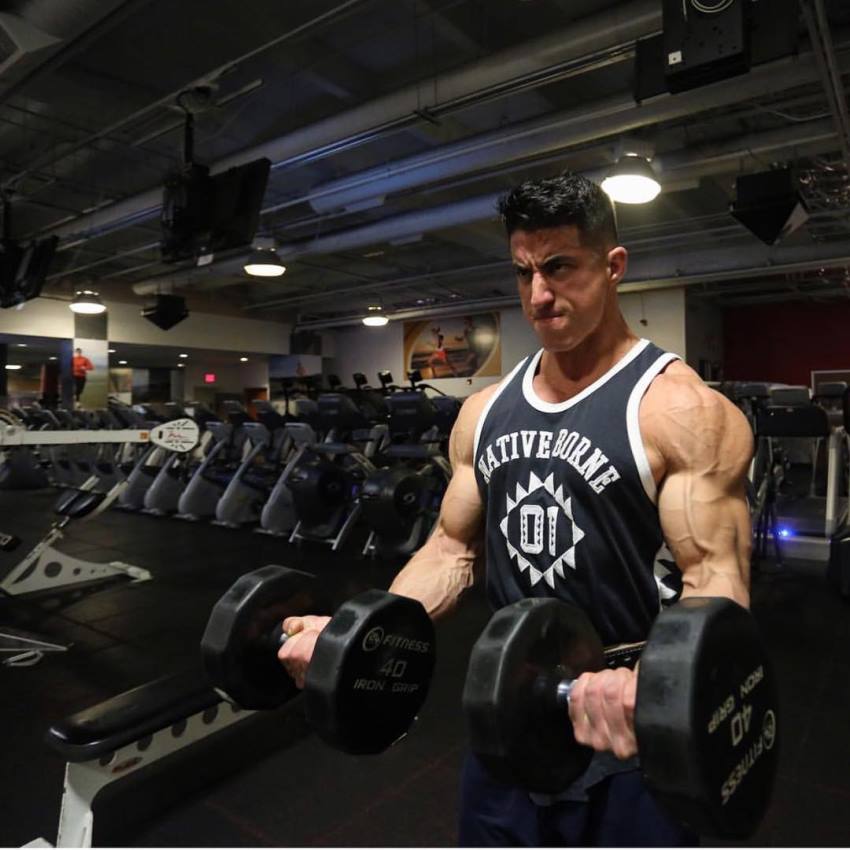 Unlike some athletes, Tomas doesn’t have an ‘off-season’ or ‘in-season’ diet. He simply eats clean year-round. His diet is high-protein based, such as chicken and beef. In Tomas’ words: “eating absurd amounts of chicken to the point wherever I go, people look at me like a freak.”

As someone who’s on the road for over 18 hours per day, Tomas doesn’t get the chance to cook his own meals. Because of this, he opts for meal prep services, or healthy food options in restaurants.

When Tomas doesn’t have the best options available to him in the restaurants, he’ll aim to pick the healthiest item on the menu, stating this can work well from time to time. “It might not be the most healthy/natural type of food, but it has worked for me.” – Tomas Echavarria

All in all, Tomas listens to his body whenever he eats. He doesn’t follow a scheduled meal plan. Instead, he eats what he feels like having at any given moment.

Tomas says, he’s not a “cheat meal guy.” He mostly eats unprocessed foods which help him stay healthy and lean.

The only foods Tomas considers ‘cheat meals’ in his diet are protein bars. He eats them in-between meals to avoid hunger, along with supplying his body with enough protein. 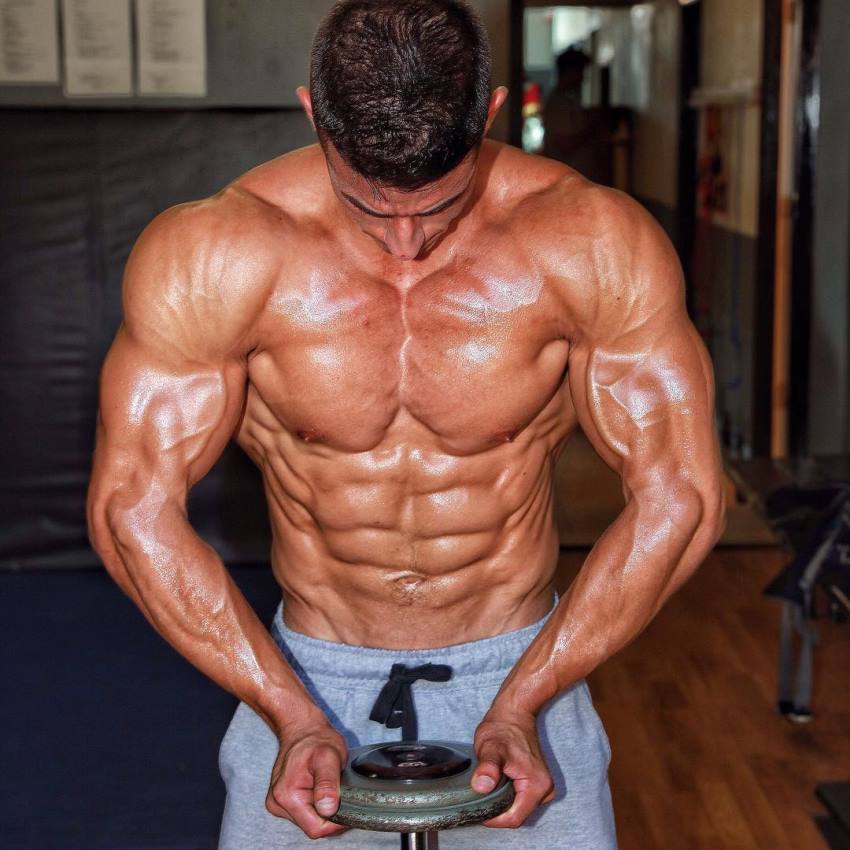 Tomas meets most of his nutritional requirements through a well-balanced diet. That said, he also uses supplements to help aid recovery from his intense workouts. These are:

Tomas believes that not all supplements aren’t necessary if his diet is well-balanced. As Tomas is on the road often, he doesn’t get the chance to eat foods such as fish or vegetables all the time.

Because of this, he’ll take a quality fish oil supplement, and a multivitamin to make sure he covers any possible deficiencies.

As for protein powder, Tomas takes it as his ‘dessert replacement.’ In other words, Tomas drinks protein shakes to satisfy his sweet tooth, not necessarily to get more protein.

Tomas believes many people who train hard lack potassium. As he says, this nutrient is vital not just for good health, but also for achieving maximum progress in the gym.

Here’s Tomas talking about this nutrient: “The pumps potassium can aid in will blow away any pre-workout supplement on the market. If you are not getting enough potassium in your diet then your body cannot convert carbs into glycogen which won’t allow you to grow as optimally as you could be.

Some of the potassium-rich foods Tomas recommends are: 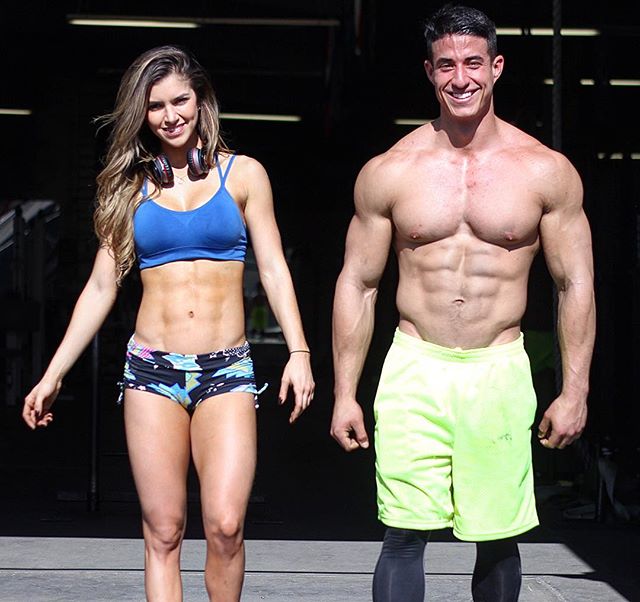 Another picture of Tomas Echavarria and Anllela Sagra together.

“Many lifters focus on just getting the weight from point A to point B without putting full emphasis on the working muscle during the exercise. Mind to muscle connection is your mind conscientiously using a specific muscle group to move a desired weight from one point to another.”

Tomas says he has “a million people” who inspire him on a daily basis, but Tomas cites his parents as the people who stand out from the rest.

Tomas describes his parents as amazing people who are entrepreneurs, just like himself. They set high standards for Tomas from a young age, something that enabled him to quickly progress in competitive sports, and later, fitness.

Here’s Tomas talking about his parents: “I can honestly say when I look at my parents they were the best role models I could have ever grown up and learned from.” 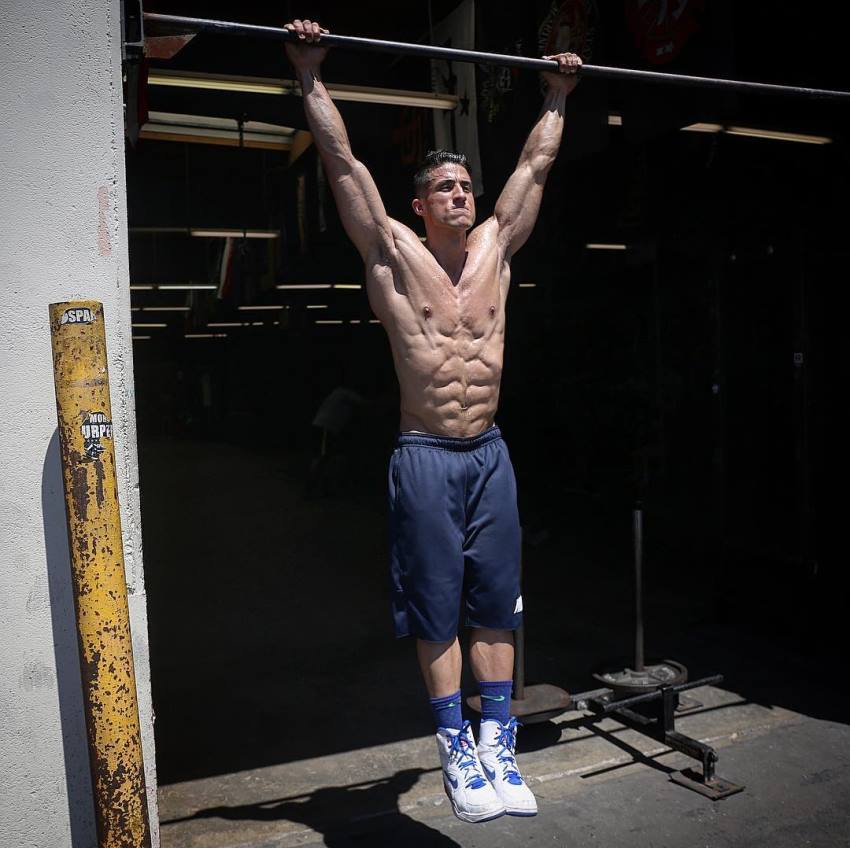 What we can learn from Tomas Echavarria

Tomas Echavarria is someone who lives the life of his own creation. However, in order to achieve this, he had to make huge sacrifices. This includes working over 14 hours per day – something that not everyone can do, but as Tomas says, he doesn’t regret a single second of his journey.

Ultimately, the most important lesson we can learn from Tomas Echavarria is this; in order to reach a high level of success, you should be ready to work hard, and long every single day until your goals are met. If you’re able to do so, then there’s nothing stopping you from reaching your own greatness – just like Tomas Echavarria did.

Hello
How are you doing today? My name is Michael.I am addressing you because I got your information online and I’m sure in good hands. I want to know if you are available for sports performance training with my teens. Please get back to me, let’s discuss in detail.
Respectfully