He’s best known for his role of Julius Rock on the sitcom Everybody Hates Chris, and his humorous TV commercials which he did for a popular deodorant company.

However, Terry’s start to acting was all but easy. During the 2001-2002 period, he failed to land a single acting role. But he came back strong to cement his name among the best actors of his generation.

This is Terry Crew’s story: 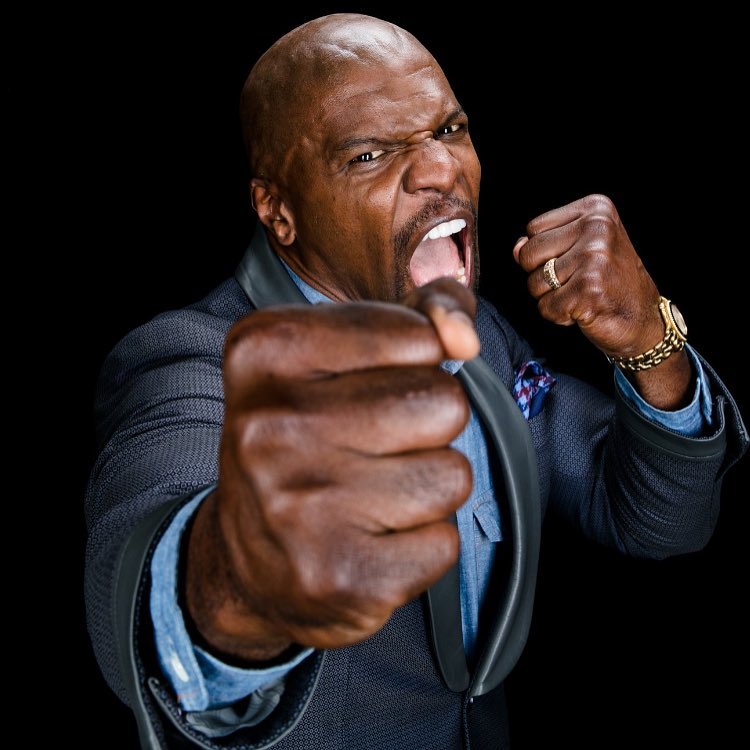 “I was a sports nut. I stayed after school probably three hours every day – from fall, to winter, to spring. Football, basketball, track… I’ve played all of them, over and over again. I loved all of it. I just loved being an athlete and all that it entailed. It really accounts for who I am today and even how I think today.” 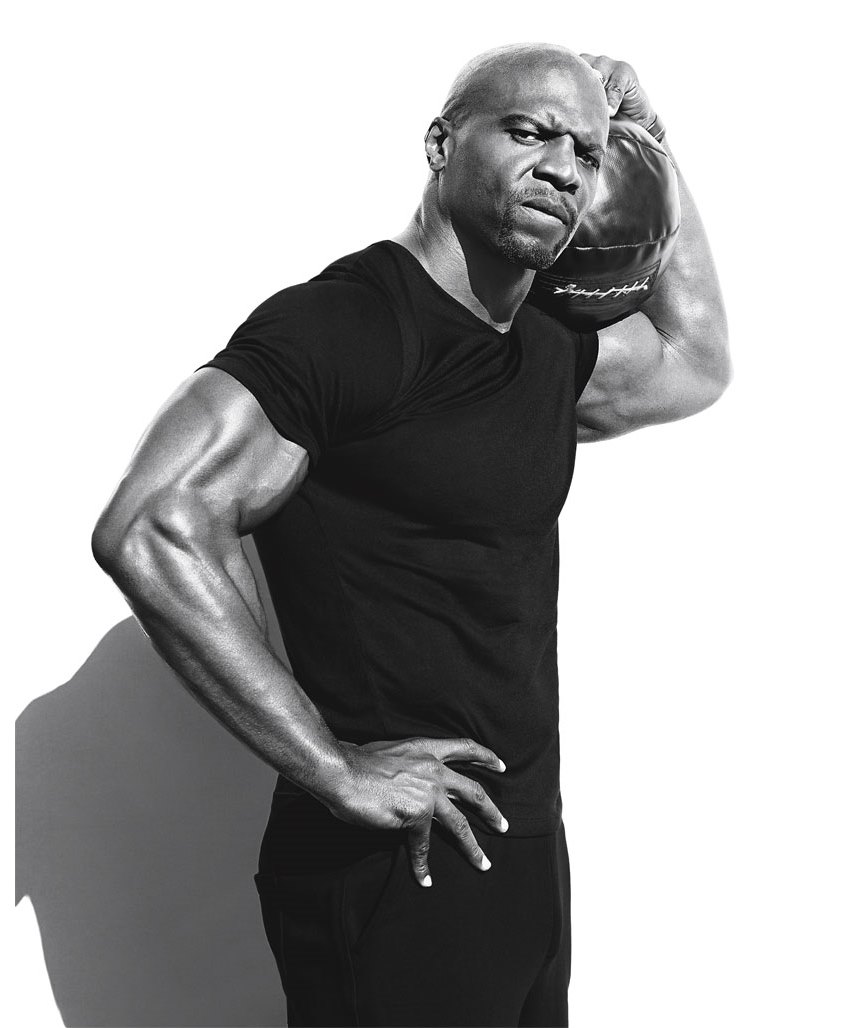 “I constantly get out of my comfort zone. Looking cool is the easiest way to mediocrity. The coolest guy in my high school ended up working in a carwash. Once you push yourself into something new, a whole new world of opportunities opens up. But you might get hurt – in fact, you will get hurt. But amazingly, when you heal – you are somewhere you’ve never been.” 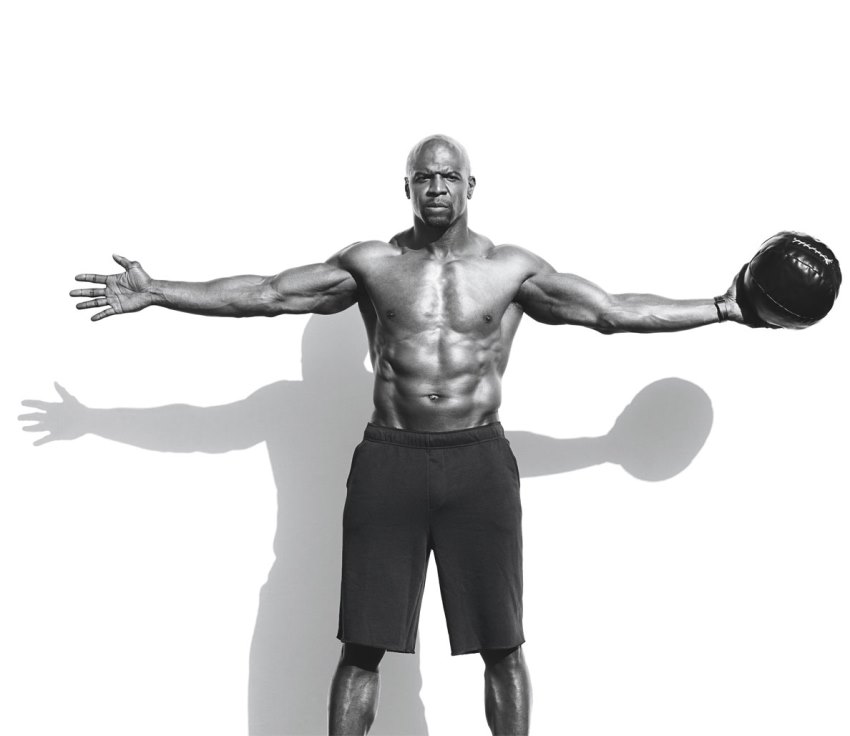 Terry Alan Crews grew up in Flint Michigan, and was raised by his parents Terry Crews Sr. and Patricia Crews. Growing up in a strict religious environment, Terry described himself as a “small kid with big dreams.” He was enthusiastic about everything he took part in, including art – one of his favorite hobbies.

He enjoyed expressing himself through art so much, that he earned a sponsored art scholarship at the Center for Arts in Michigan. After graduating from high school. Later, he earned another scholarship in Art Excellence.

Alongside his “artistic passions,” Terry was also a keen football player. Out of the two, art was his favorite hobby for the majority of his schooling days. However, over time, his passion for football “took over.”

Terry played as a defensive end, aka, linebacker for his football team WMU Broncos. There, he saw his amazing performances earn him and his team All-Conference honors, and the 1988 Mid-American Conference Championship title.

During his 6-year-long career in football (1991-1997), Terry played for some of the top NFL teams. Including the Los Angeles Rams, Washington Redskins, Philadelphia Eagles, and the San Diego Chargers.

During this time, he played in 32 games; achieving a personal record of 57 tackles, and 38 assists.

“What shocked me, and what I wasn’t prepared for, was just how brutal and how unethical some people can be in the NFL. I mean, there were some great people, but there were some real snakes, too. I was like, ‘Holy cow!’ But it made me a better person, and it got me ready for other things.” 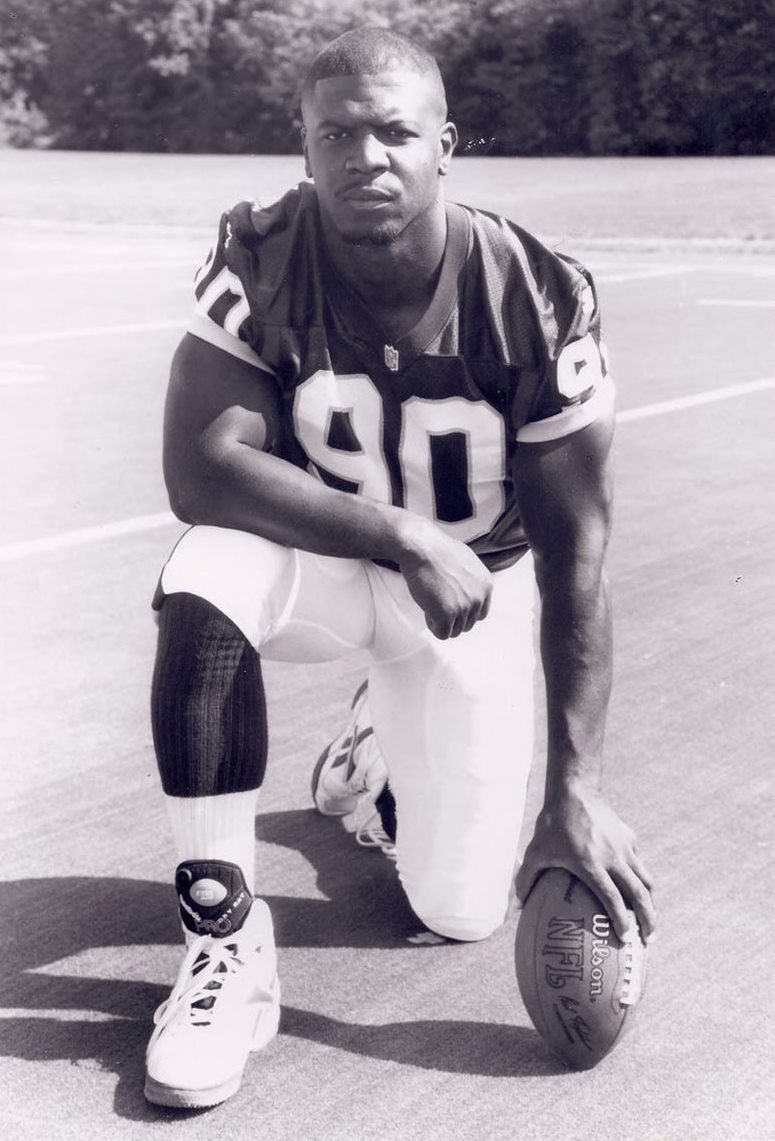 Start of the Acting Career

After his retirement from American football in 1997, Terry moved to Los Angeles to pursue a career in acting. He always dreamed of becoming an actor one day, but it wasn’t until 1998 when his dream would become a reality.

His first film was ‘Young Boys Incorporated,’ which he had co-produced. It was filmed in Detroit, and carried an anti-drug message. Even though Terry described the film as “horrible,” he said the experience itself was insightful, and interesting.

In 1999, Terry auditioned for a role in Battle Dome, a popular show. He earned the role of a ‘character athlete’ called “T-Money.” He played the role for two seasons, before the show was cancelled in 2001. His debut in Hollywood came in 2000, with the Arnold Schwarzenegger movie, The 6th Day.

Performing in front of a big audience in his first show, and movie, is what made Terry realize he wanted to chase acting as his career. However, he failed to land a single job as an actor for the following two years.

After two years of “spinning in circles,” Terry finally made his first big breakthrough. He got a role in the movie Friday After Next, playing as Damon. In the movie, he starred along Ice Cube, a popular rapper, and actor.

Terry said he never took acting classes before this. He then asked himself what the audience wanted, believing this was the key to success.

Soon, appearances in numerous commercials, comedy shows, and movies followed. Terry’s performance in ‘White Chicks (2004),’ and later, ‘Everybody Hates Chris’,  brought him a lot of prominence in the media.

After his appearance in ‘Everybody Hates Chris,’ Terry started landing main roles in sitcoms such as ‘Are We There Yet?,’ and ‘Brooklyn Nine-Nine,’ where he played as Sergeant Terry Jeffords.

During 2006-2009, Terry mostly appeared in comedy movies and shows. However, he later found success in action movies such as ‘The Expendables’ playing Hale Caesar.

Although Terry has kept a muscular physique throughout his acting career, he rarely played a role of a “typical brawny action hero.” Instead, he often mocked the stereotype of the “gym-addicted” bodybuilder in his comedies. This is what ultimately separated him from the rest on the mainstream TV – bringing him a lot of success in the process.

This contrast between Terry’s roles and his physique is what led to him creating a number of humorous deodorant commercials, for which he’s well known.

Some of them are ‘Cloudy With a Chance of Meatballs,’ and ‘American Dad!’ He also ran his own reality TV series, ‘The Family Crews,’ where he showed the public a closer look at his personal life. The series ran for two seasons, before Terry moved onto hosting a game show, ‘Who Wants to Be a Millionaire.’ 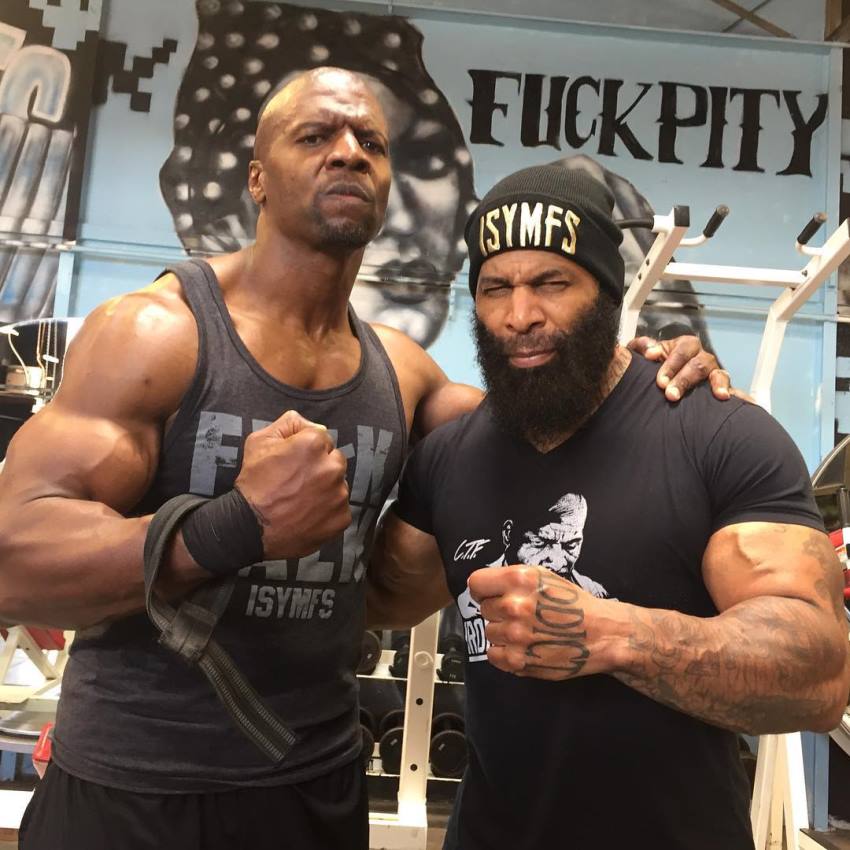 Terry has a wife Rebecca King (former gospel singer). They have four children named Wynfrey, Azriel, Tera, and Isaiah. Terry also has a stepdaughter, and one granddaughter from his wife’s previous marriage.

In his free time, Terry is a painter, PC gamer, sketch artist, and video content creator.

In 2014, Terry released his autobiography book ‘Manhood: How to Be a Better Man or Just Live with One.’ In the book, he mentioned his long-lasting addiction to pornography, which he was able to beat through rehabilitation in 2010.

To this day, Terry often speaks publicly about the dangers of this particular addiction, and the negative impact it can have on people’s lives. 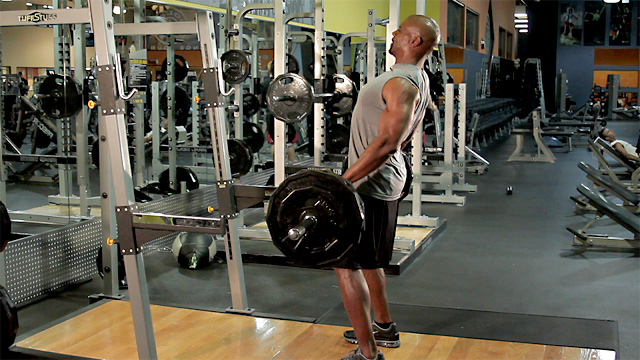 “I will always consider myself an athlete. My workouts are about survival, longevity strength and endurance. I realized working-out should be about getting smarter as well as stronger.”

Terry combines his athletic background with the knowledge he’d gained over years spent working out in the gym. He trains with movements which use multiple joints, such as power clean and deadlifts. These, according to him, build “total-body power,” and also thicken his muscles.

After he’s done with his standard compound lifts, Terry proceeds to isolation exercises. Which focus on specific body parts.

He also incorporates cardio in his weightlifting regimen, having six 30-45 minute sessions per week.

Terry says the best thing for boosting natural testosterone levels is lifting heavy weights. He believes this is especially important for men who enter their 40s and 50s.

However, he never advises going for a 1-rep-max. Instead, he believes the best way to grow in strength, and keep optimal testosterone levels is by lifting weights 3-5 times with the right form.

Listening to His Body

Terry usually has one rest day per week. However, he pays attention to the signs his body gives him. Meaning, if something “feels off,” or if he feels more tired than usual- he’ll rest as long as he feels it’s necessary. 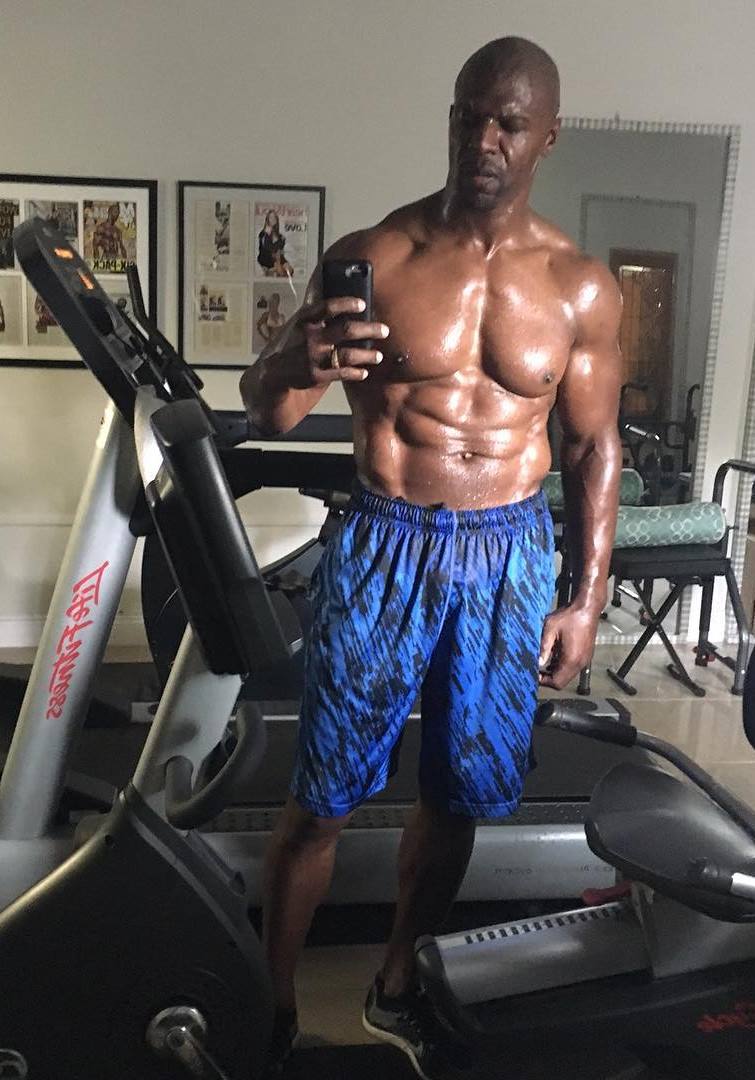 Tuesday – Back and Cardio 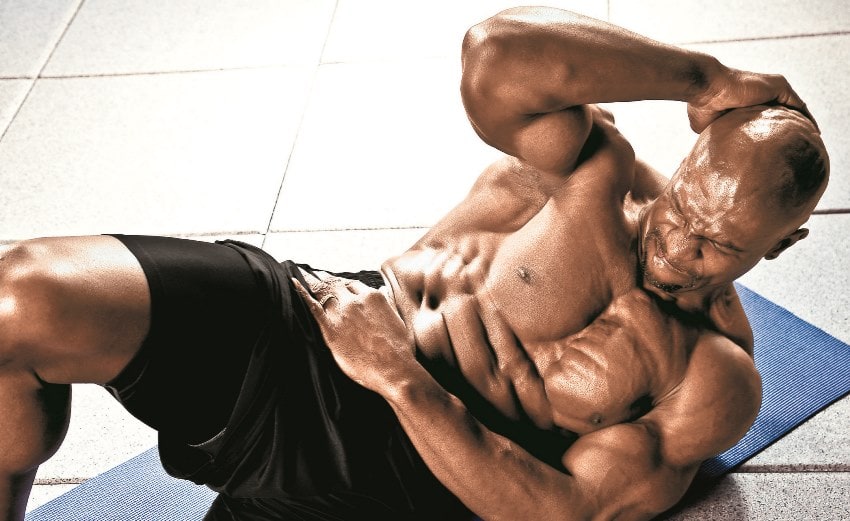 Terry doesn’t believe in the idea of bulking and cutting. He likes to stay lean year-round, saying; “I always stay about two weeks out from being able to take my shirt off. There’s no off-season for me. I don’t like this whole bulking up and getting down thing. You should be ready to look good all the time.”

One of the ways he achieves this is by doing Intermittent Fasting. The term means not eating anything for a period of time. In Terry’s case, he doesn’t eat anything until 2 p.m. After this, he has an 8-hour window during which he consumes three or four meals. His biggest meal comes last – around 10 p.m.

During his fasting periods, Terry only drinks green tea and amino-acids. They provide him with vitamins and other essential proteins he needs.

As a result of this approach, Terry’s weight doesn’t fluctuate. It stays at around 235 pounds throughout the entire year.

Meal Plan for a Movie Role

While he was “shredding down” for a movie role in ‘The Expendables,’ Terry followed this diet; 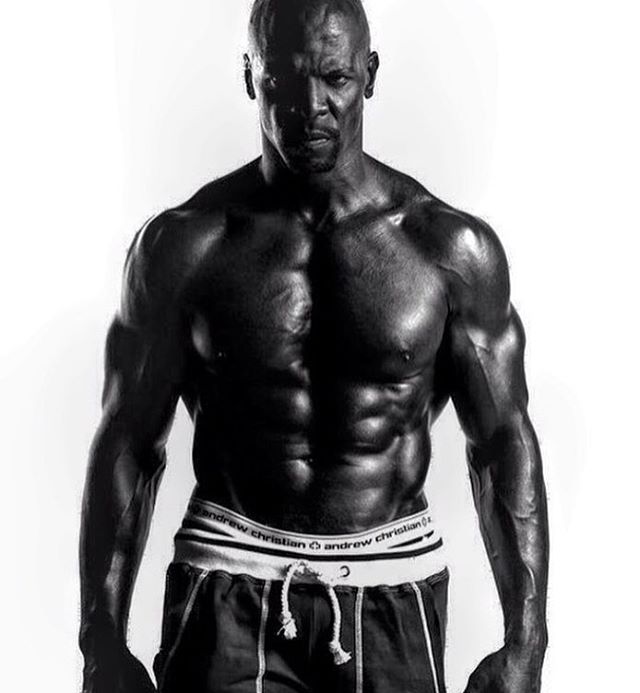 Although he had support from his family and close friends, Terry had to be his own influence for the better part of his acting career.

He had to “plow through” those difficult periods where he didn’t get any movie roles; having only hope as his motivation to continue working hard on his career. 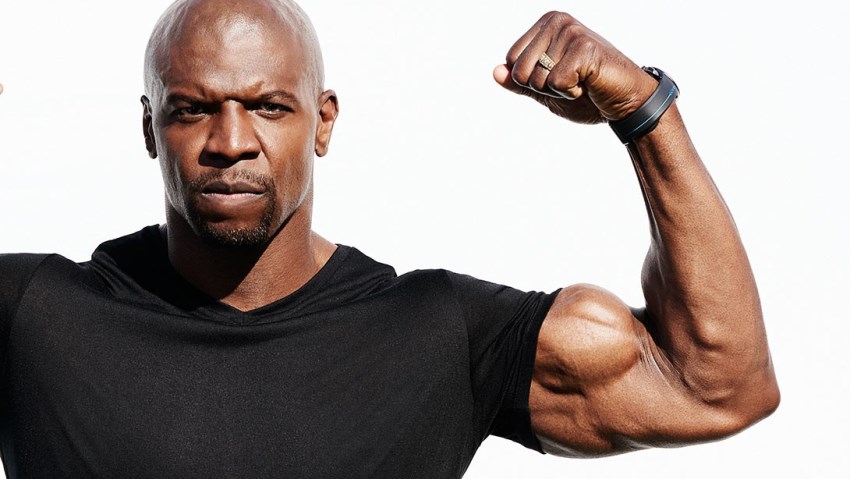 “I’m a very physical actor; everything I do is pretty much body-oriented. I sometimes am able to deliver information just with a look; my face does two or three different things, and it says it all. “

What we can learn from Terry Crews

Even though Terry is an individual with an enormous talent for acting, and sports, he’s proven to everyone that hard work is still the number one recipe for success. As he says; “Without sacrifice, talent by itself is not enough.”

That’s why it’s important to keep “putting in the reps” on your journey towards greatness. Without relying too much on ‘external factors.’ It’s important to push through those moments where it feels like nothing is going according to plan. It’s during these moments that characters of greatness are built – just like in Terry Crew’s case.

Terry is a great example of old school
work ethics and it shows applied to what ever he does . Weight lifting and exercising is what got me thru AML a Leukemia blood cancer 22 months ago .at 68 I’m very blessed to still be here to tell others how I feel We made it. Positive thinking and strength conditioning. Terry is a good man and mentor to others.