Steve Reeves is one of the most inspirational bodybuilders the sport had ever seen, and that still stands true today. Having both a successful career as a bodybuilder and actor, Steve Reeves was one of the first of the community to present large muscles on a global platform.

It was this act that inspired a generation, from Schwarzenegger to Stallone, all the greats of that era owe their determination and drive to the example Reeves set those years ago.

Mr. America, Mr. World, Mr. Universe, and if it was around at the time, probably Mr. Olympia. He was the man with one of the greatest physiques of all time, and this, is his story: 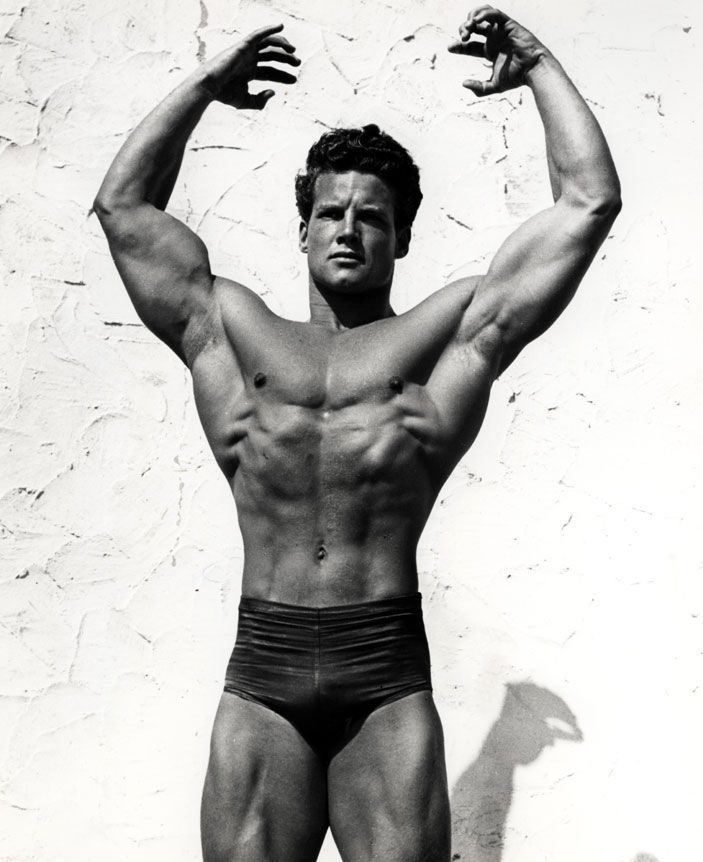 “When your arms are bigger than your head, something is wrong.” 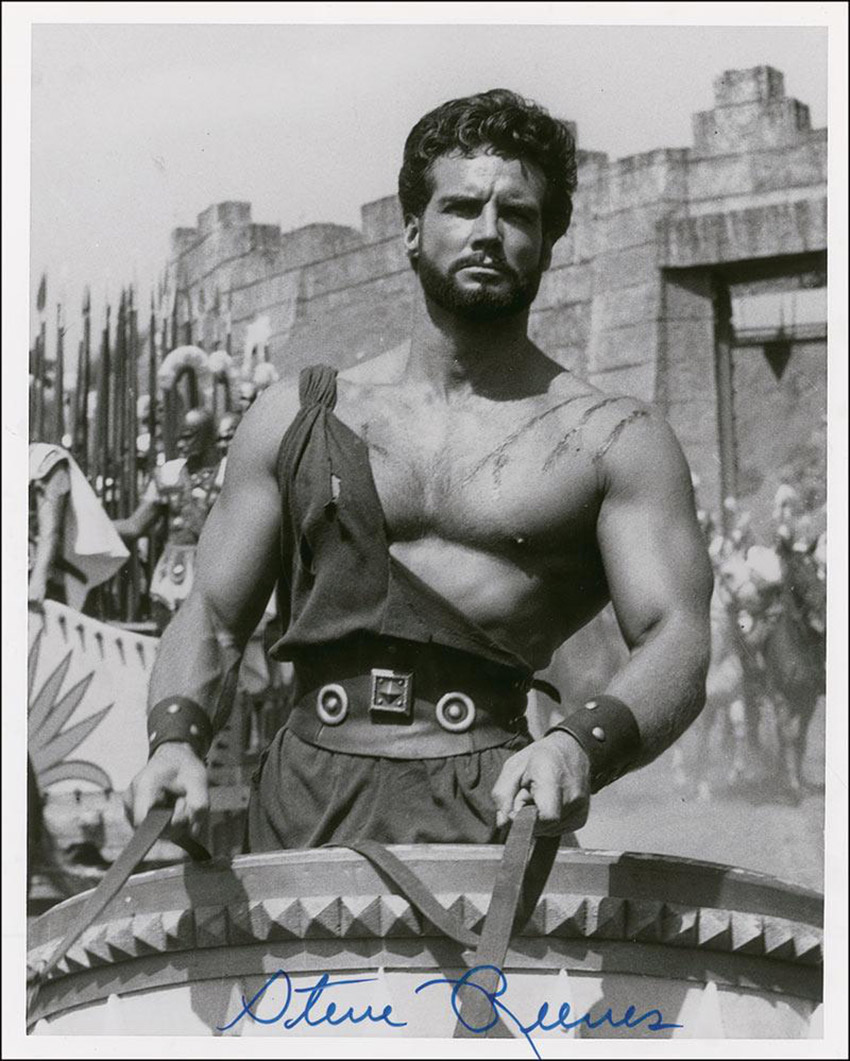 “When I worked out, I would concentrate deeply on the exercise I was doing and the muscle I was working. I would picture those strands of muscle working and getting bigger. I’d put myself into almost a hypnotic trance when I was working out.” 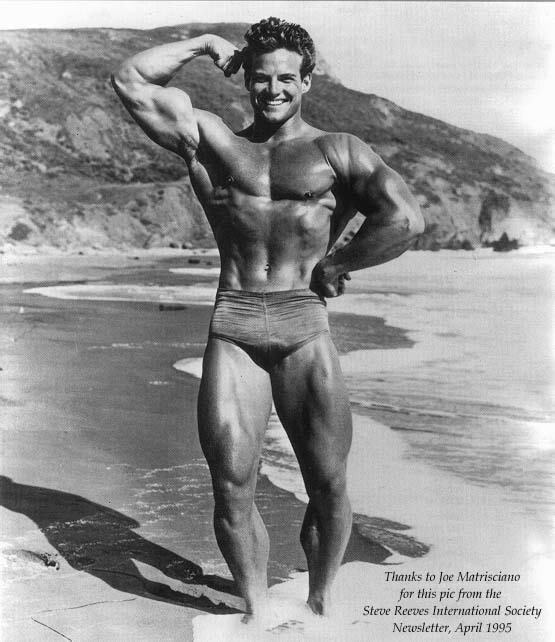 “We should try not only to build a balanced life, but also a balanced physique.”

Steve Reeves was born in Glasgow, Montana in 1926. At the age of 10, Steve’s father, Lester Reeves, unfortunately died in a farming accident – leading Steve and his mother, to make a new start and move to Oakland, California.

This is where Steve’s journey began to becoming one of the most memorable bodybuilders of all time.

Reeves’ first step in developing his chiseled physique first started after an observation by his mother – he had horrible posture. As a child, Steve would drop his shoulders forward, a habit that his mother didn’t want him developing any further.

To solve the problem she fitted Steve with a shoulder brace, so that he couldn’t make the same mistake again without being cut into by the equipment. He developed perfect posture.

The second step happened at school. After engaging in a friendly arm-wrestling competition, Reeves found himself defeated by a much smaller boy. After discovering that his opponent had been lifting weights, Reeves decided to start too – and after also being shown photographs of bodybuilders by a friend, he knew what exactly what he should be aiming for.

In High School, Reeves was making great progress at the gym. He was eventually discovered by Ed Yarick, a local gym owner who wanted to train Reeves and take his body one step further.

Reeves’ training was put on hold when he graduated high school due to World War 2, where Steve was stationed in the Philippines, and in Japan for a short period after the war. 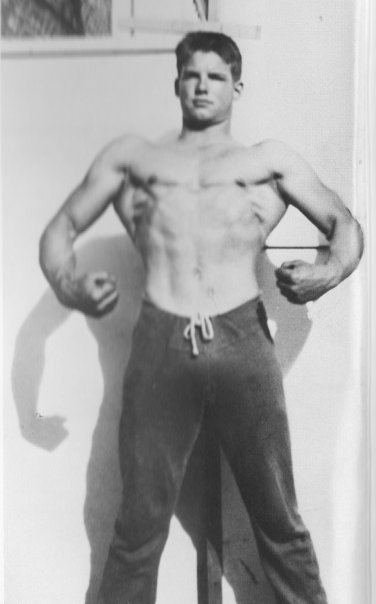 After his return to California in 1946, Reeves was ready to start training again – and so began his successful career of dominating the bodybuilding industry.

Starting out in 1946, Steve won his first competition, Mr Pacific Coast, and was hungry for more. He’d return to win it again in 1947, along with also winning the Mr. America competition. By 1950, Steve had attained the titles, Mr. Pacific Coast, Mr. America, Mr. World, and Mr. Universe.

But Steve was going to become much more than a bodybuilder, he was about to be an icon.

After attaining Mr. Universe the job offers came flooding in from Hollywood. After thorough acting lessons in New York, Steve took an extensive amount of roles from 1954 to 1969, appearing in a total of 18 movies.

He was one of the first real bodybuilders to star in movies and show the world what a true lifter looks like. He also inspired a generation of younger men to take up the sport such as Arnold Schwarzenegger, Sylvester Stallone, Lou Ferrigno and Serge Nubret.

However, his film career became finite after a shoulder injury during the filming of  “The Last Days of Pompeii” when a chariot crashed – this would eventually become unbearable for Reeves and stopping both his bodybuilding and film-making career. 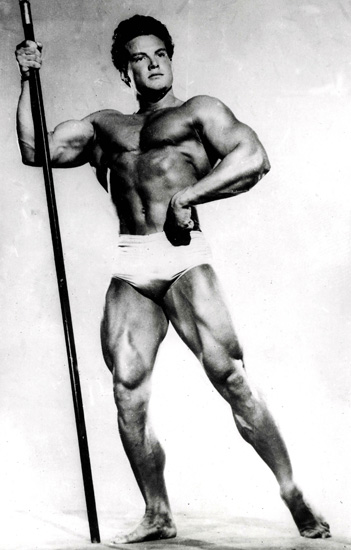 “I don’t believe in bodybuilders using steroids. If a man doesn’t have enough male hormones in his system to create a nice hard, muscular body, he should take up ping pong.”

Unlike most most bodybuilders, modern and old school, Steve believed that less is more when it came to training.

With many of the greats cramming themselves into the gym almost every day of the week, Steve had a more relaxed approach. In total, Reeves would only train 3 times a week, and strictly follow a full-body routine every session. He believed plenty of rest was the key to any great physique – so the fewer gym sessions the better, as long as they were done right.

During his full-body workout, there were several things Steve would do differently to regular lifters to attain that award-winning physique:

1. Saving Legs Until The End of The Session

Steve knew the legs were key to most compound upper-body movements, standing military press, deadlifts, even bench press – but if you train legs first, you’ve tanked all of those exercises.

If you leave leg training until last, you’ve already partly used them in the lifts beforehand – you’ve warmed them up. It makes a lot of sense.

Reeves has stated his standard routine would run like this:

In that order, and you’ll have noticed a pattern there too:

Steve was a big fan of training opposing muscle groups at the same time. Let’s say you were training biceps, after that set you would flip over to a tricep exercise, and then back to biceps, going back and forth until you were finished.

This would not only save time during your session (as full-body workouts can take hours), but also allow the muscle to recover before the next set.

3. Always have a Goal

One of the reasons Steve was one of the largest bodybuilders of his generation was his constant drive for success. He didn’t like standing still, was always forcing himself to constantly improve.

His main aim whenever he walked into the gym was to achieve a personal goal. Something to improve upon from the last session he had in the gym. Reeves always ensured his next session triumphed over the one before it, this sheer determination allowed him to make incredible amounts of progress very quickly, and allowed him to become one of the most inspirational lifters we know today.

Steve was a huge fan of using ‘power walking’ as a tool to either get in shape, or stay in shape. He aimed to walk half a mile in 8 minutes, and once that goal was achieved, the idea would be to walk one mile in 14 minutes flat once his fitness levels improved.

As for frequency, Steve recommended power walking should be done at least four times per week for 30 minutes.

For improved fitness levels, he suggested walking 2-3 miles, and for maintenance, 1-2 miles. 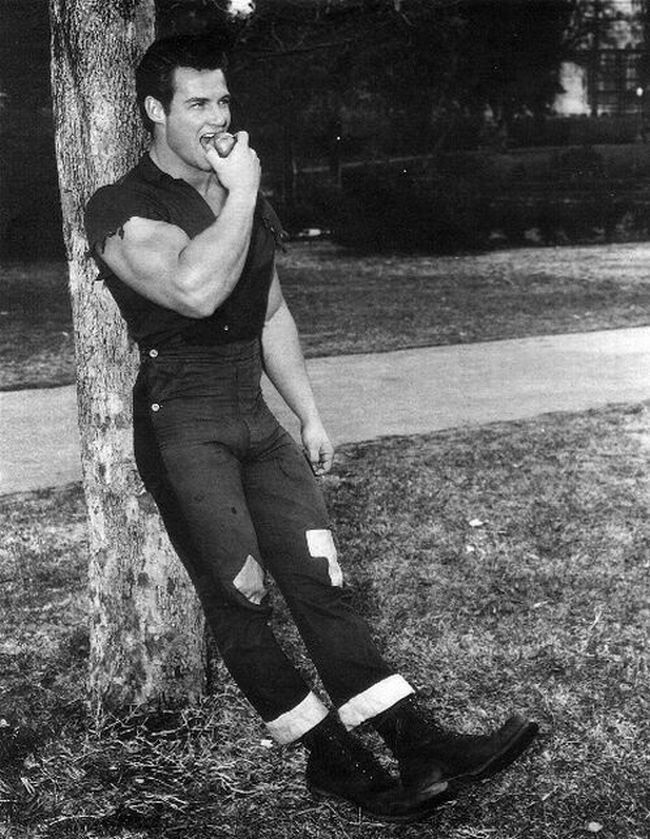 When it came to nutrition, Steve ate how most bodybuilders of his time ate back in the day – whole foods, and a lot of them.

He was very pro-carbs and believed in a 60/20/20 split of carbs/fats/protein – pretty much unheard of at its time, but apparently very effective.

But what was most interesting is that Steve would have a pre-workout day – eating specific foods the day before training to make sure he got the most out of his upcoming session.

From how Steve’s described it in the past, it was essentially one big carb-loading day with him eating a range of complex carbohydrates such as oats, almonds, bananas and more.

This ties in with him training only 3 times a week, you can tell from the way he planned around them that every session counted.

Inspired to reach your true potential like Steve? Read our complete guide on how testosterone booster supplements can really enhance your game! 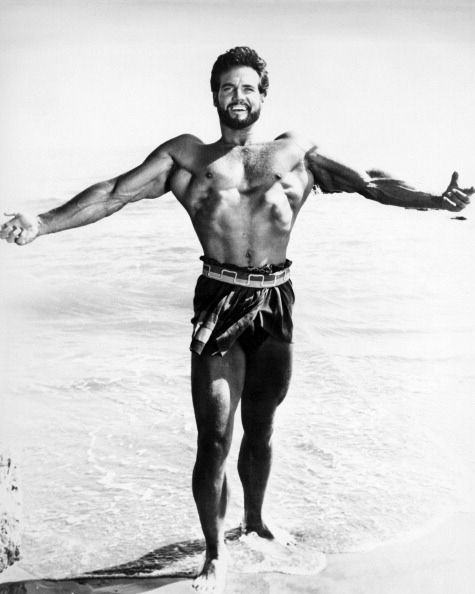 Steve Reeves will always be remembered as one of the most inspirational bodybuilders on the planet.

Here are just a few of the bodybuilders that have acknowledged Steve as one of their inspirations:

And many more, these are just a few of the athletes that have claimed Steve Reeves to be one of their biggest inspirations. He’s gone down in history as the man with “the body that launched a thousand careers’. 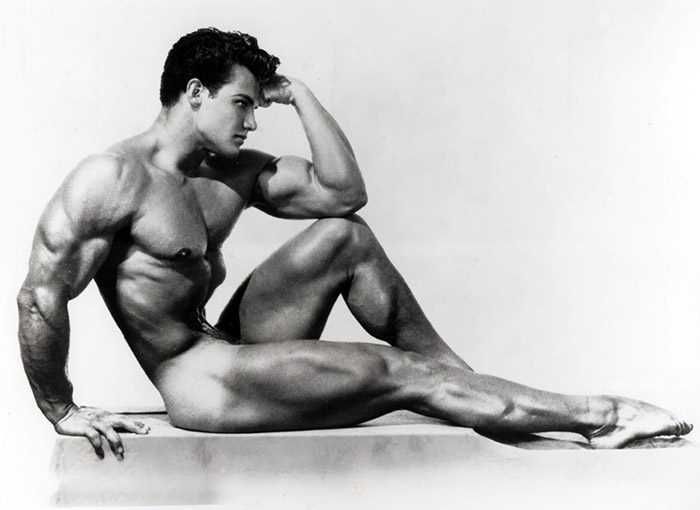 “No brain, no gain. Not no pain, no gain… I would do my exercises real strict, real correct. You know, slow and perfect form – no cheating.”

What we can learn from Steve Reeves

If Arnold Schwarzenegger is the father of bodybuilding, Steve Reeves is definitely the grandfather. From losing an arm wrestling bout, to winning Mr. Universe, Steve Reeves is the shining of example of anything being possible if you put your mind to it.

His legacy in bodybuilding inspired an entire generation, without Steve Reeves, the industry would not be as well known as it is today.

Steve’s success teaches us it’s not about how much you give, but what you give. With only 3 dedicated training sessions a week, Steve outperformed all of his competition and built one of the best bodies the sport has ever seen.

It’s an inspirational message to those who don’t have as much time to train and still want to build an impressive body – excess can be beaten by efficiency if you put your mind to it.

Steve reeves was always a favorite of mine. He left a very good legacy.

What about Steve’s development of the strong walk. Surely that is worth a paragraph.

Well spotted. We’ve now included power walking into Steve’s profile – it was one of his most important tools that he use to stay in shape all year round. It needed to be added.

Thanks again, and all the best,

I remember reading about reeves when he was 52yrs old. He power walked then, he said, with ankle wts and wrist weights or small dumbbells in hands. I was inspired by reeves when I was ten in 1961. Thief of Baghdad, my favorite. I became a very good distance runner, and weight training did help, all of my life.

steve reeves was mr perfect i have looked at his physique for 55 years and i found no faults at all , and there will never be another steve reeves for at least a thousand years

Steve Reeves, was the most handsome, symmetrically ideal physique the world has ever seen! There will never be another male put together genetically, like Steve Reeves.

His waist was way too small…

I see all Steve Reves Hurcues
Movies pluss Last day of pomppi
And the white Worrior! He look
like the real deal! No steorides
only pure body building!
I was inspired by him and of
Course Jack Olane ! So I keep
On working out at 65 years young! Because of guys like
Steve and Jack! God bless there
Memories forever!
Gary

[…] at Steve Reeves he had a great natural build by today’s standards, and he didn’t use steroids as back then […]

If I could a body that I would like to have it is Steve Reeves…He had no weaknesses. From his perfect chest ,to he 28 in waist, to his 18 inch calves. Great hair and perfect face. I have seen body builders bigger ,but never more proportioned than Steve.

Anyone out there remember a book called ” Every Boys Book of Bodybuilding” from the 1960s
Steve Reeves endorsed it and I have been trying to find a copy or PDF without success. Any tips would be greatly appreciated. I had this book as a kid and it started my interest in fitness. Thanks in advance.