Steve Moriarty is a fitness model, bodybuilding competitor, and entrepreneur from America, with an interesting back story. He began his career as an amateur wrestler, which enjoyed for a number of seasons until he suffered an irreversible injury – which halted his career in the ring.

After looking for another way to fulfill his passion for competing, and pushing his body to the limits, Steve found bodybuilding. After several years of hard work in the gym, Stave decided it was time to step on stage and compete in a bodybuilding show.

Needless to say, he did exactly that, and took part in the prestigious Team Universe Championships in 2013, where he won the trophy.

With a growing fan-base on Instagram (@manofsteel1285) and a down to earth personality, Steve has gone on to become a household name in the bodybuilding world. Here is his story: 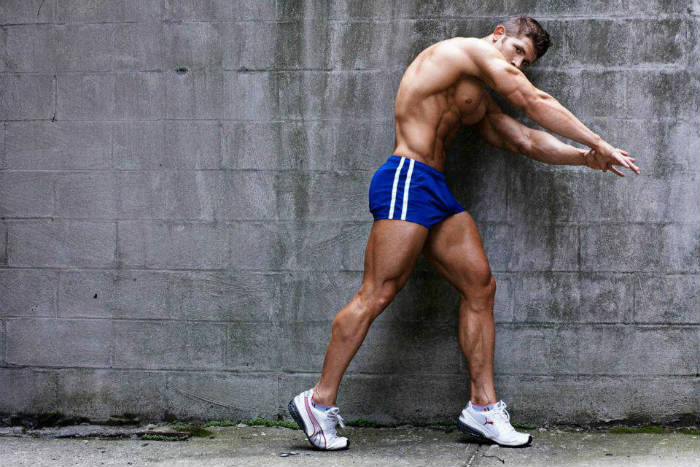 “We can choose to settle or not,  and that is the difference between those who are successful and aren’t.” 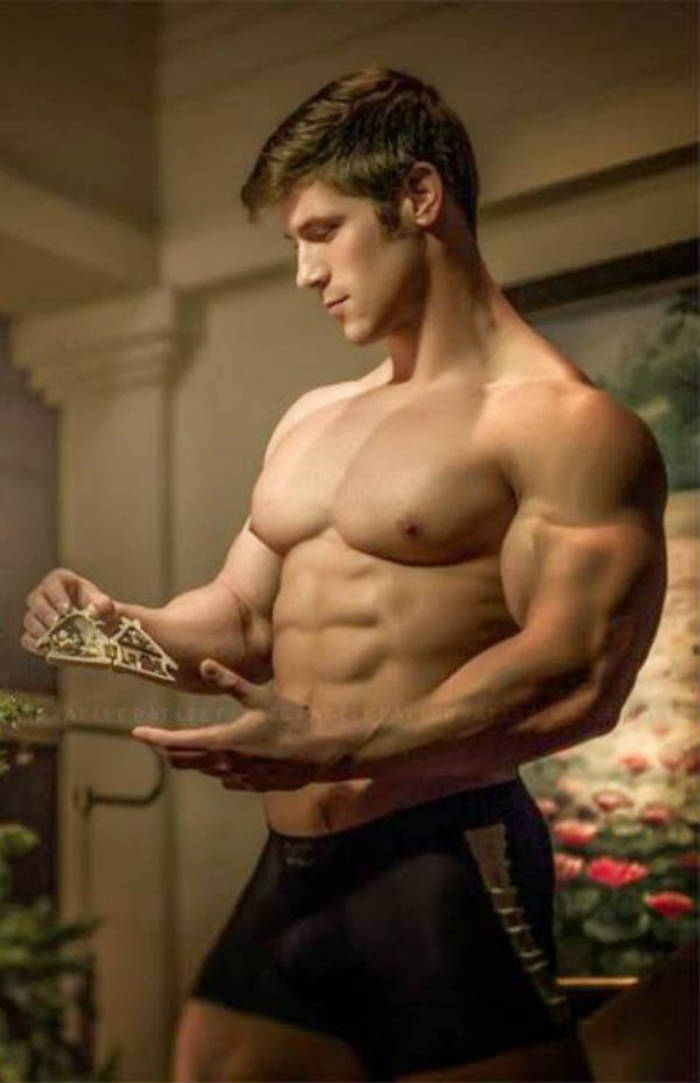 “I truly believe that you haven’t failed unless you’ve quit, and if you aren’t giving it 100%, that is the equivalent of quitting.” 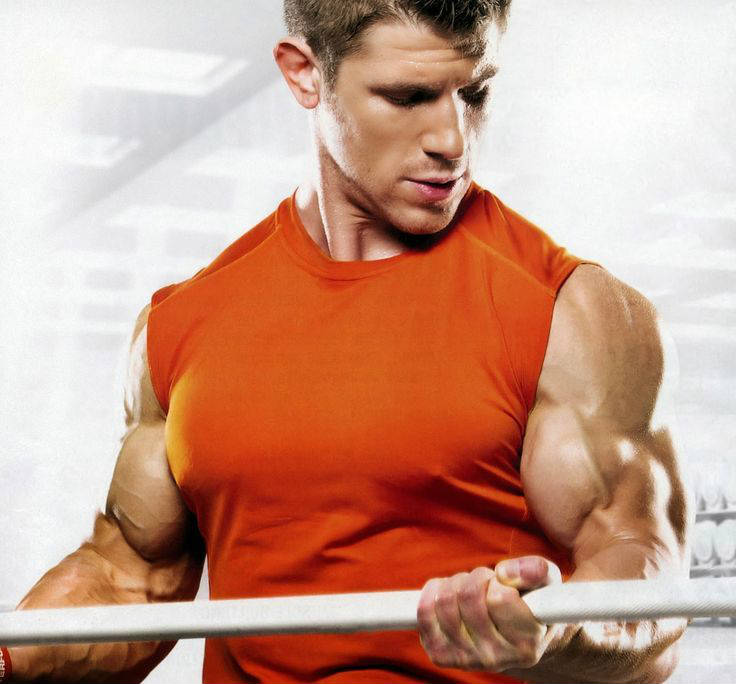 “My biggest thing is WORK HARD! So many people are looking for the short cut or the easier/faster way to do things.”

Steve was born 1986 in a small town called Rahway, New Jersey. His early years were dominated by a variety of sports, but his main passion from 10 years old was wrestling, which he saw as his way to become his idols; the “incredible hulk” and “superman”.

What started as a simple hobby and outlet for his energy, eventually became his main focus. His teenage years were spent working out hard at any physical discipline with the aim of being the best.

One of Steve’s key defining moments that shaped his drive and determination was during high-school. He was told that he’d never beat the high-school record for the bench press for his weight class.

At the time, he weighed 95 lbs, and the current unbeaten record for the school was held by someone weighing 145 lbs. After gathering all of his will power, and the desire to prove everyone wrong, he crushed the record, leaving his entire school speechless. Since this early victory, he maintained the idea that “failure is not an option.”

Steve as a young teen

Following his success in weight lifting, Steve was also a gifted wrestler. Steve hoped to take his wrestling skills with him to college. Unfortunately, an injury to his back, resulting slipped disk, put an end to his dreams of becoming a national wrestler.

Steve recalled the doctors advice, telling him to avoid any contact sport. This news dashed his hopes of continuing sports professionally. He was devastated.

The realization that his childhood dream was no longer achievable, lead Steve into a spiral of drinking and laziness at college.

“He told me for as much as I drank, I had a decent physique and may be able to win the show the next year if I quit drinking and started training.”

Steve was “hardly eating,” and his sense of direction seemed lost. Luckily, a bodybuilder friend noticed that Steve was wasting his potential. This friend encouraged him to get in shape for a University Physique Competition. With nothing to lose, Steve jumped straight into training. 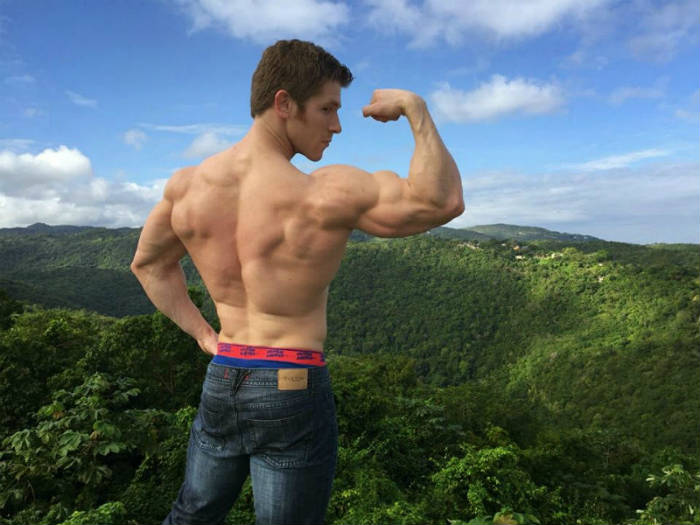 After his first competition in College, Steve became ‘hooked‘ to the feeling of being on stage against other athletes. Steve decided this was his calling, and made further plans to compete and make bodybuilding his life.

After finding his feet once again, he soon realized his passion was to ‘transcend human limitations, and inspire others to strive for greater and pursue their dreams’. – Steve Moriarty

“The more I fell in love with the sport, the more I trained.”

After returning to his normal way of life – being healthy and competitive. Steve successfully finished College with a BS in Kinesiology in 2009. Steve admitted that his real education came from the gym and his trainers.

Since then, he’s competed in a number of bodybuilding shows, including the prestigious Team Universe Championships, in which he won the light-heavyweight contest in 2013.

Branching out into Modelling

After securing himself on the bodybuilding scene, Steve decided to pursue other career paths – modelling. Steve traveled to the East coast, to follow his ambitions in modelling. He’s since been photographed by a number of top photographers, including making appearances on TV shows.

As well as professional modelling, Steve’s also been dedicated to his work as a personal trainer. He’s worked with a number of people aiming to get in shape, as well as other fitness models and competitors. 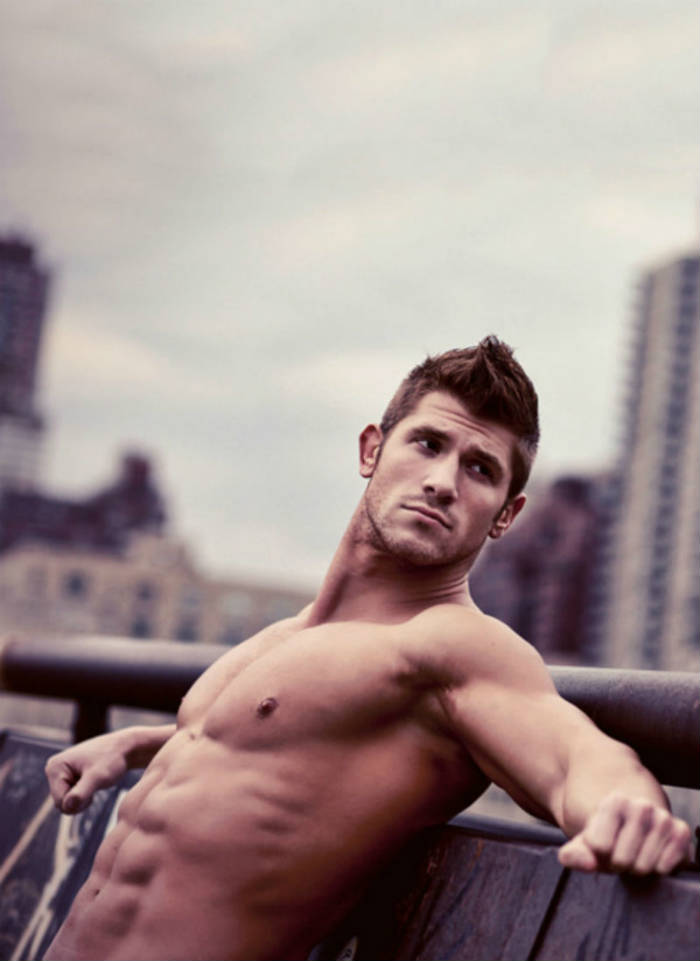 “I feel lost in the gym without my watch.”

As a personal trainer, competitive bodybuilder, and model, Steve has an extremely regimented training routine. He trains every body part two to three times a week, and always goes to failure on each set.

As he focuses on aesthetics, he changes his splits depending on which muscle needs more attention. He also sees timing as extremely important. He times each interval between sets so that his rest breaks are short, allowing for fat loss, along with muscle building.

Cardio doesn’t play a huge part in his schedule, but, he does run a few times per week. He usually completes two mile runs at a moderate speed, as well as sprinting workouts and plyometrics. 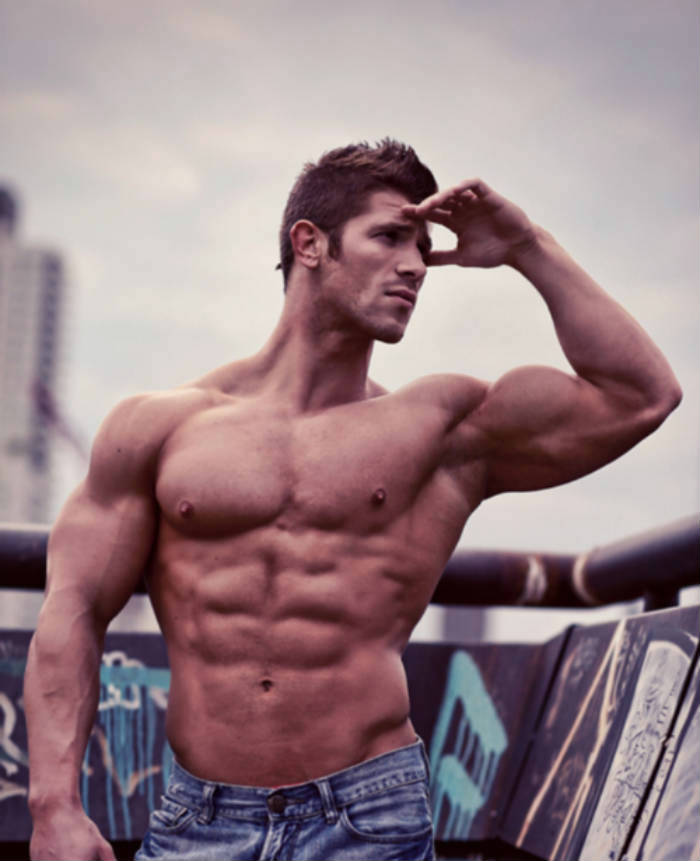 Steve is a big supporter of healthy eating. His main focus is on eating quality, lean protein sources, which enable him to hit his macros for each day. He also introduces healthy carbohydrates such as oats, alongside fruits, and nuts for his fats.

His protein intake is kept steady throughout the day, and is only elevated after his daily workout. His carbs are tapered also, and his fats are kept as low as possible, aside from the healthy fats in nuts and avocados etc.

In terms of supplements, Steve utilizes protein shakes, creatine, BCAA, multivitamins and fish oils. Occasionally, he also adds in a pre-workout drink to power him through his grueling sessions. 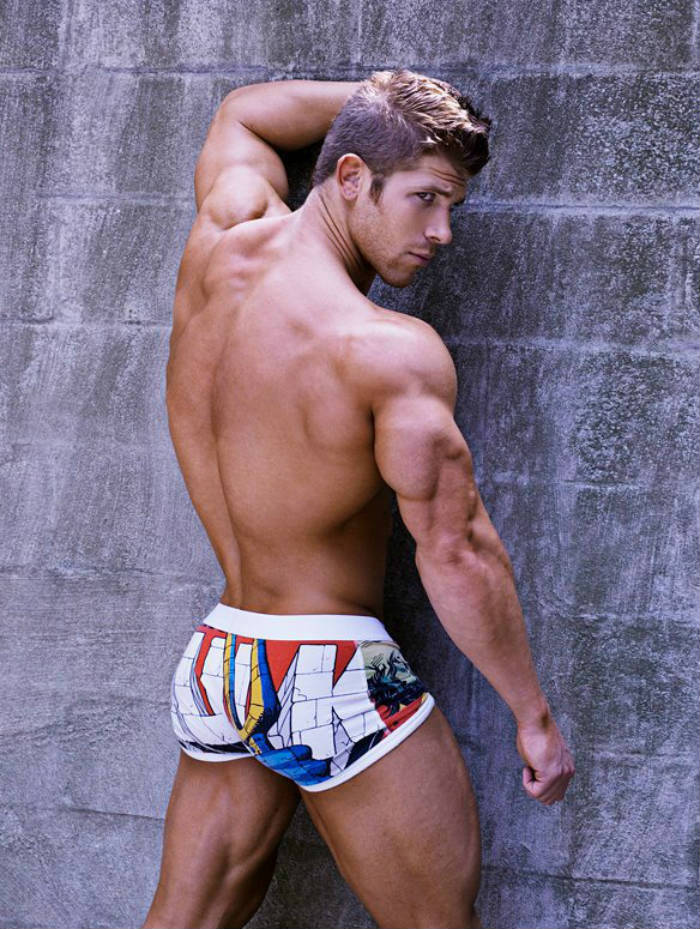 “I feel like when I am eating right, lifting hard and getting the rest I need my progress does not stop.”

Steve’s idols are the current champions and professionals who he competes against, and trains with daily. This includes Brandon Hendrickson from Chicago. However, his main idols, and influences, were the superheroes he grew up idolizing as a child. It was these charters, that motivated Steve to become the aesthetic legend he is today. 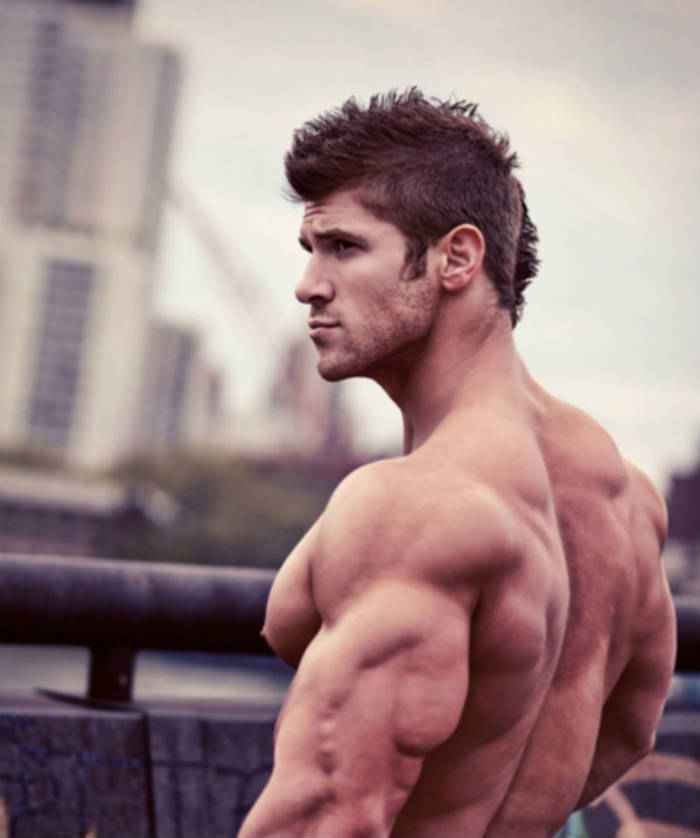 “I think you need to want to always see what more you can do.”

What we can learn from Steve Moriarty?

Steve’s story is one we can all take inspiration from regardless of our level. He managed to overcome a major setback in his career after suffering a back injury in high-school.

Even though he though his sporting career was over, he dedicated himself to achieving the best life possible through bodybuilding. His grueling training regimen, alongside his excellent diet, is something many of can aspire to replicate. Follow Steve’s discipline and will-power, and you too can archive your goals.

Know this guy from my gym in Naperville. All I can say is he has earned his oats. Thanks Steve for being an inspiration to all of us.

When Steve was in 5th grade, I looked at my pudgy son sitting on the couch playing Nintendo. I was worried. Then one day he comes home and said he joined the wrestling team. And he knew he had to lose that useless fat.

The summer after his 5th grade, he wanted to wrestle offseason tournaments to “get as many medals as I can.” He developed a style all his own and won most of the tournaments he wrestled. When I picked him up after school at the beginning of his 6th grade, the wrestling coach came up to me and said, “Where did this kid come from!?! He’s awesome!” In less than a year, Steve had gone from a pudgy kid on the couch who couldn’t wrestle a lick to someone his coach truly admired.

During his 6th grade he was showing up to school early every morning to weight train. His wrestling coach, Coach Garvey, would open the doors to the school so Steve could get in his workout before school started. On the walls of that weight room was a board that kept track of weight lifting records. The records went back 20 years. Steve had his eyes on the bench press record. As stated above, he not only broke it, he shattered it. The school’s athletic director said, “That record will never be broken.” Steve was only in 6th grade.

The one thing that needs to be stated is this was all Steve. Something clicked in him between that couch episode and joining the wrestling team. And it has never wavered. Once he sets his sights on achieving a goal, nothing can stop him. It’s one of the reasons so many people admire him, especially his dad. All this in one of the nicest guys you will ever meet.