Serge Nubret is one of the all-time greats, nicknamed both ‘The Black Panther’, and ‘The Nubret Lion’ for the same reason: he was fearsome. During his peak, no-one wanted to go toe-to-toe with Nubret, he was the biggest and most cut bodybuilder of his generation.

As the only bodybuilder to hold 6 world titles in 4 different federations – Serge Nubret will always be remembered for having one of the greatest physiques of all time.

But his journey to the top wasn’t without its setbacks. From his humble beginnings in the small French isle of Guadeloupe to being honored, then outcast from the IFBB, and finally founding and spearheading a new movement in the sport by creating the World Amateur Bodybuilding Association (WABBA) – Serge Nubret is one of the most influential bodybuilder of all time.

In our exclusive profile, we look deeply into his life, training, nutrition and philosophy to learn more about his greatness and we can use his example to achieve our own goals.

This is Serge Nubret’s story: 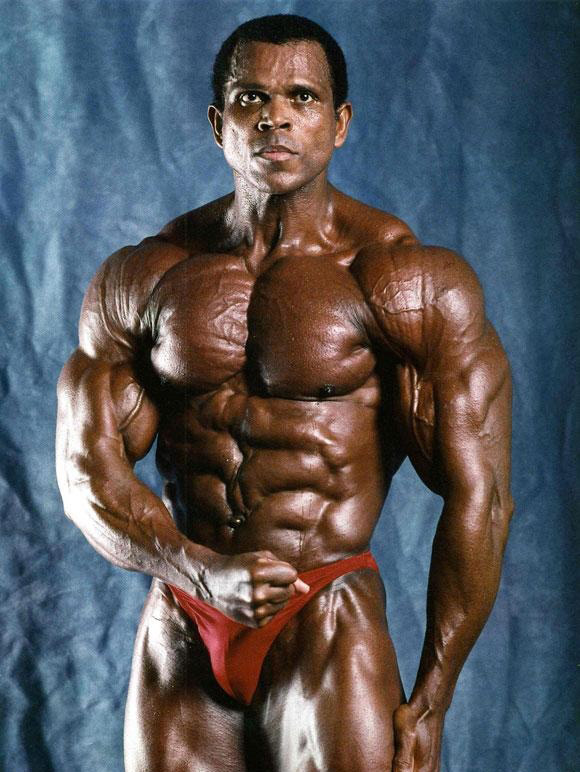 “To be a good bodybuilder, you must be a good observer.” 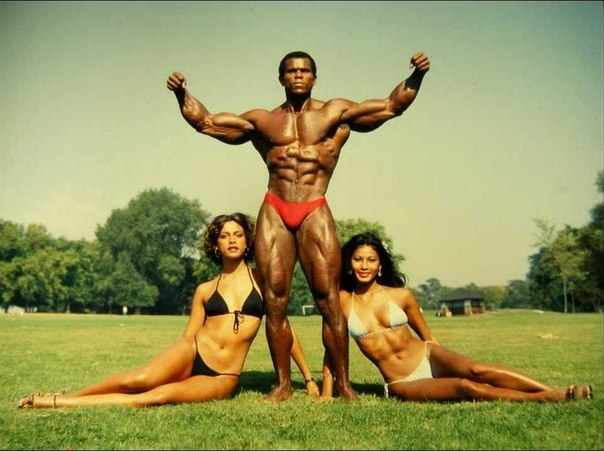 “A bodybuilder is a sculptor that carries with him his own material.” 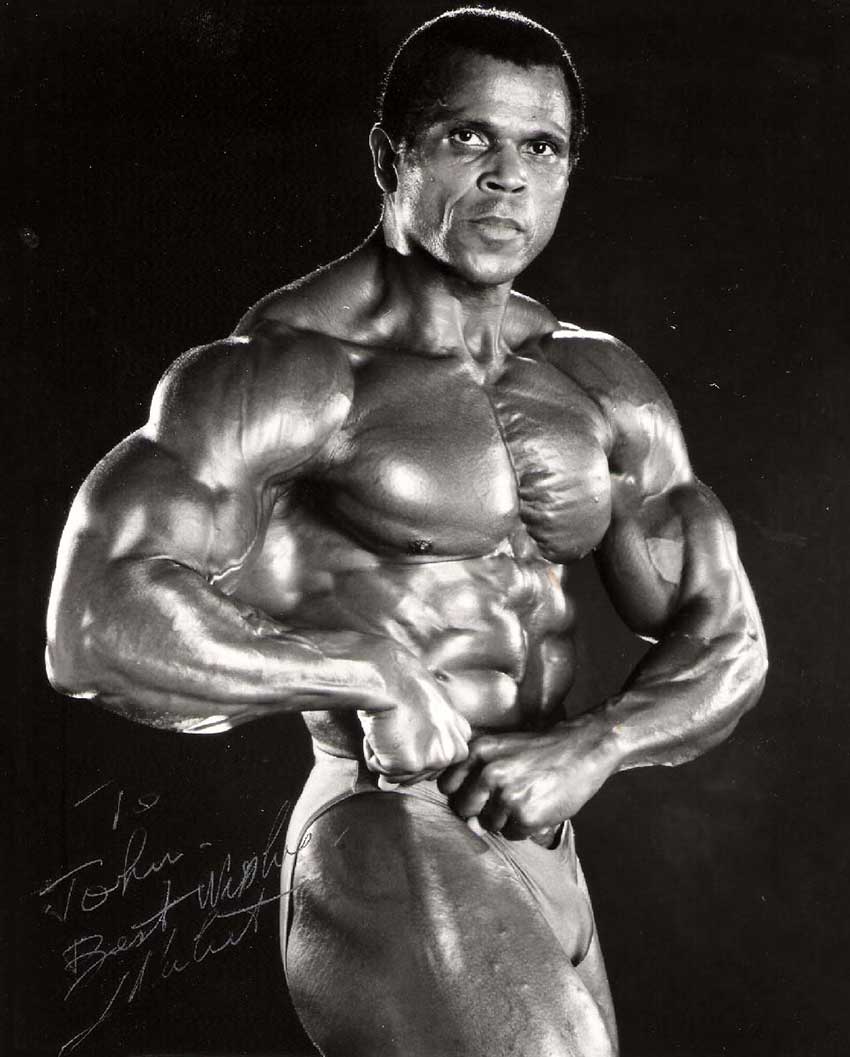 “Bodybuilding is not just about physical training with weight to change how you look. It’s about mind, body and spirit together in union so that everything grows, not just your muscles.”

For the first few years of his life, Serge grew up in Guadeloupe, a small French island in the Caribbean. In 1950, however, at the age of 12, Serge and his family moved to France to further the future bodybuilder’s education and development.

This is where it all started falling into place.

During his adolescence, Nubret discovered his talents for athletics, dominating in school sports and realized he had a future as an athlete.

In 1958, at the age of 20, Serge finished his studies and moved back to Guadeloupe with one goal in mind: to become a world champion bodybuilder. That very same year, he won his first Bodybuilder” competition ‘Mr. Guadeloupe’, but he had much more in mind.

During his time in France, Nubret had developed a passion for the sport, and believed it to be his “raison d’être” or in other words, his reason to live. 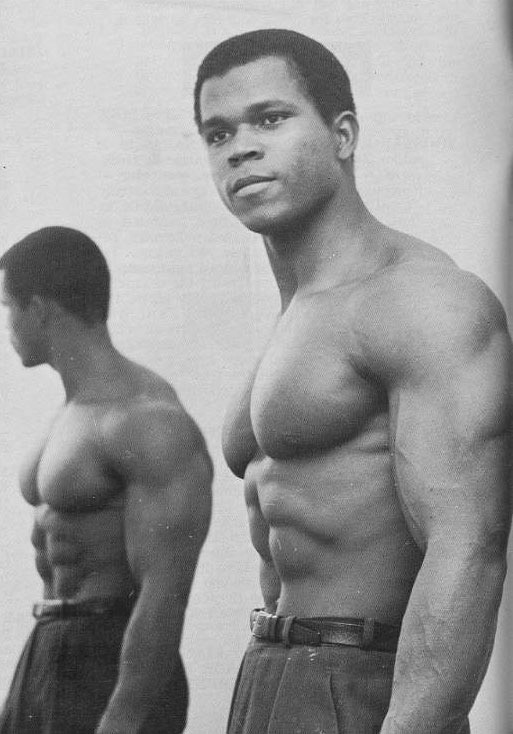 From 1960 onward, things started to happen fast for Nubret. He had 2 years of training, an incredible physique, and limitless ambition – it was time to take things to the next level.

That year he was accepted into the International Federation of Bodybuilders (IFBB) and declared World’s Most Muscular Man within just months of membership, and his success just seemed to snowball – including many acting roles in several feature films.

By 1970, Serge was not only a dedicated member of the IFBB, but the head of the French and European arm of the federation – that was until 1975 where Nubret decided he didn’t like the way the federation was headed.

The 1975 Olympia was to be Arnold Schwarzenegger’s last competition, and Serge Nubret was the biggest threat. He was believed to bigger, stronger and more cut than anyone else in the industry at the time – and that worried the judges. For Arnold’s last show, the rumor was they were willing to do anything to let him win.

That was until the night before the contest, when the Federation reopened his application and allowed him to compete again – at which point Serge had already lost 14lbs of muscle.

This gave Arnold a clear advantage and secured his victory in the contest – with Serge still managing to come 2nd, beating Arnold’s prime competitor Lou Ferrigno.

Serge’s Side of ‘Pumping Iron’

In the classic bodybuilding film ‘Pumping Iron’, Nubret is described as a ‘last minute contestant’, but in an interview with bodybuilding.com, Nubret tells a different story:

“In Pumping Iron at the Mr. Olympia when they announced “The last minute contestant Serge Nubret,” everybody knew for a very long time before that day that I was going to South Africa to compete and what happened when I got there. The camera crew came to Paris to film me 4 weeks before and offered me $200 to be in the movie. I did not agree to be filmed for $200; it is why I am not in the movie that much; only in the competition part.”

It definitely puts the events into a different light.

Life after the IFBB and the Formation of WABBA

Disenchanted with the IFBB, Serge gave up is position and went on to head up another Bodybuilding organization – the World Amateur Bodybuilding Association, or WABBA – with the intention of making sure competing athletes were continually given the support they need.

Nubret boycotted the IFBB for the rest of his career and went on to win multiple world championships in both the NABBA and the WABBA bodybuilding federations.

He remained active on these circuits all the way up to 1985 – that’s 25 years on the stage. After finishing up his competitive career, Serge owned and managed his own gym in Paris and released his autobiography several years later in 2006.

He is still, to this day, has been the only bodybuilder in the world to hold six world titles with four different bodybuilding federations.

Up until his passing, Serge was still very active in bodybuilding forums. He was always available for diet and training tips, offering advice to his fans in 3 different languages over 15 different websites. 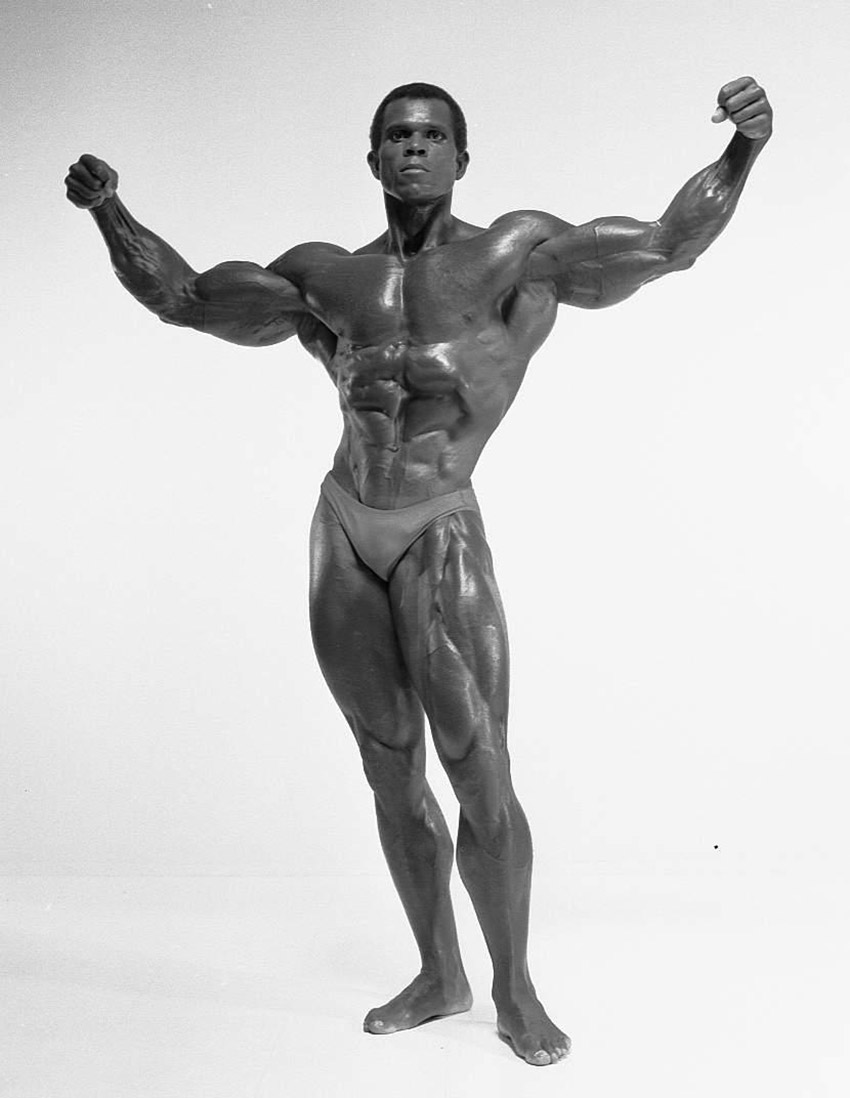 “My training was based on concentration, and it’s impossible to cheat when you are concentrated.”

Serge was renown for his intensive, and unique training style. There was one method, and one method only: Reps. Lots and lots of reps.

Despite his enormous, thick build, Nubret didn’t lift heavy – he found his body responded the best to light weights over a long duration of reps and sets.

In interviews, Nubret has claimed to train with 30, 40 or even 50 sets for some body parts (with the exception of only 16 sets for arms) that each consisted of 12 – 20 reps per set, with only 30 seconds rest between each. Workouts went on as long as they had to, with sessions lasting up to 5 hours at a time!

He was also famous for having one of the smallest waists in the business – Nubret claims the secret is one-straight hour of ab work every day: Starting with one long set of 2000 sit ups every morning. 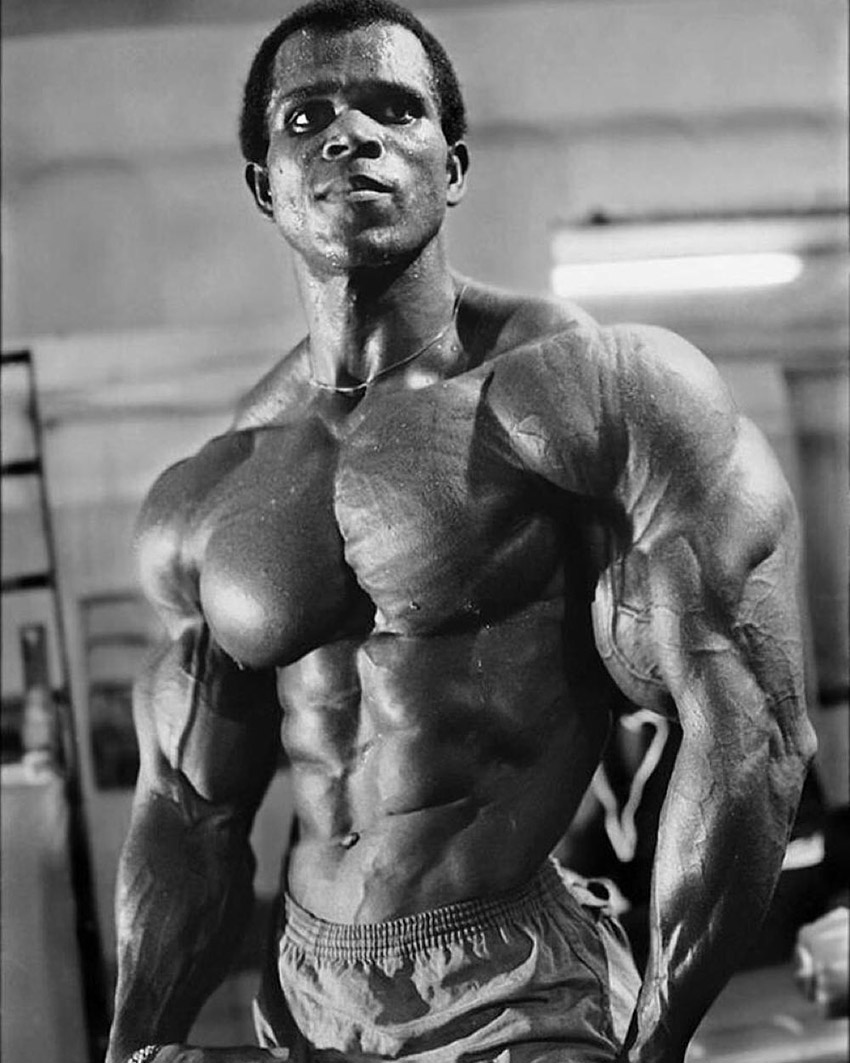 It’s not the food which give you a general lean and vascular appearance, but the training or a combine of both.

During competitions, Serge was an animal when it came to eating.

He claims to have ate a lot of red meat, rice and beans – when training for a competition Serge could eat up to 6lbs of red meat a day.

When it came to supplements – Nubret lived on a small island off the French Caribbean, he’d never heard of them. The same goes for anabolic performance enhancers.

When he first started training, Nubret lived off Caribbean food up until his first international competition in Montreal.

“Bodybuilding is not only a sport, but first an art.”

Serge always claimed his biggest inspiration in the was actor/bodybuilder Steve Reeves.

He was the reason Nubret started bodybuilding in the first place after seeing several of the actor’s movies and realized that was how he wanted to look. 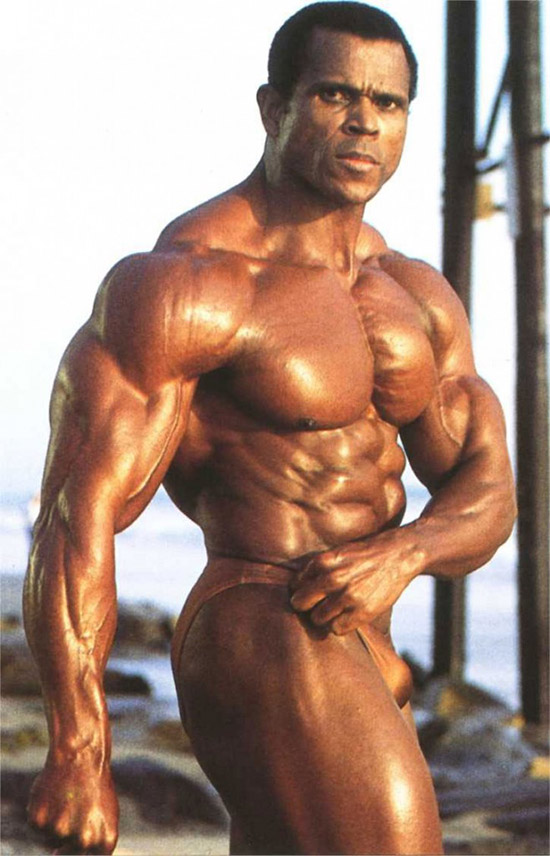 “Perfect form is the most important thing to have a perfect body, it’s impossible to make a painting with a big brush.”

What we can learn from Serge Nubret

Arguably, Serge lived the bodybuilder lifestyle harder than anyone else.

He was a big believer in never going heavy, but pushing yourself as hard as you can. Instead of focusing on the weight, you should focus on yourself.

Don’t be intimidated or pressured into achieving the heaviest lift in the gym, instead, think about your form. Are you engaging with the muscle as well as you possibly can?

And this doesn’t just apply to training – but also to how you live your life.

Whatever Serge did, he didn’t care about the size of the achievement, but that it was done right. Winning (and running) the IFBB was a huge and heavy task, but as soon as comprises were being made and the federation’s ‘form’ started to falter, Serge started from scratch and founded WABBA – making sure it every step was executed to pure perfection.

No matter how big or small, Serge taught us a task should always be done to the best of your ability. If you feel that standards are starting to slip, and you can’t give it your all – take a step back until you can.

[…] had the most impact on his lifestyle are Muhammad Ali, Bruce Lee, Pele, George Best, Arnold,  Serge Nubret, Greg Plitt,  and Ulisses […]

Nubret, had the most ‘beautiful’ muscle configuration I have ever seen, genetically, he was put together, in an incredibly beautiful form. Had he being 5 to 8 per cent bigger, with his muscle ‘configuration’ he would have been unbeatable!

A total beast. And he did not lift heavy, trained for 5 hours… He was a genius

An old school bodybuilder who truly viewed the sport of bodybuilding as an art.

Truly one of the greats and the FIRST “uncrowned” Mr. Olympia. FYI, in the last picture posted in this profile/article, Serge was at least 49-51 years old when he did that photoshoot – SUPERHUMAN!

[…] as Frank Zane would only weigh around 185lbs in competition. Serge Nubret had tiny wrists but his arm size was 21.5″ and in many people’s opinion had the best physique of all time. Keep in mind I’m using […]