From a small village in Ghana, West Africa, Samuel ‘Titanium‘ Kulbila has shocked the world with his defiant attitude by creating one of the greatest physiques to come out of the ‘garden of Eden’ with his own home-made-equipment.

Samuel has competed in local bodybuilding contests, grown a huge following on Social Media, and continues to strive towards becoming, “one of the greatest bodybuilders of all time.”  It’s clear to see Samuel shown no signs of slowing down. 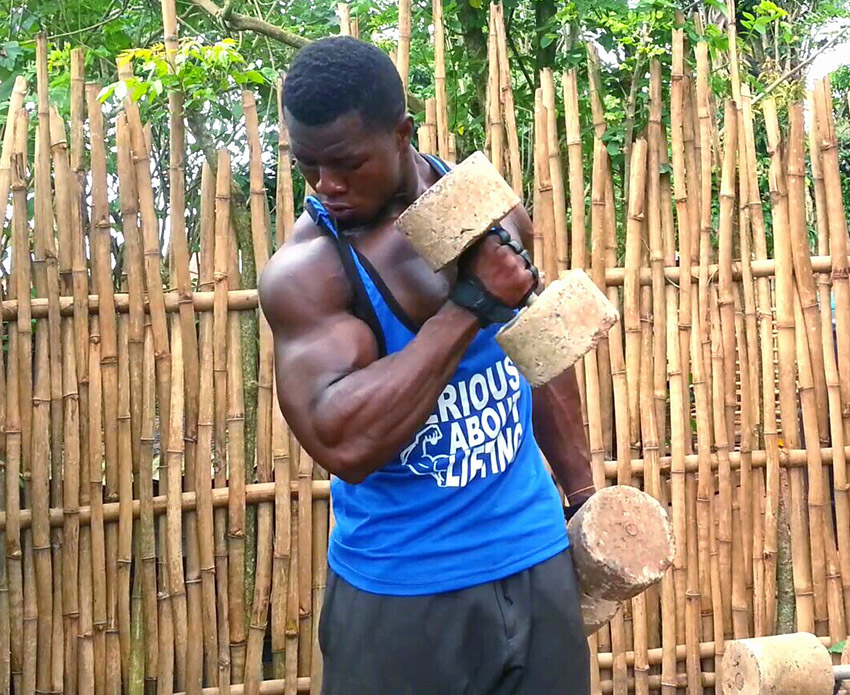 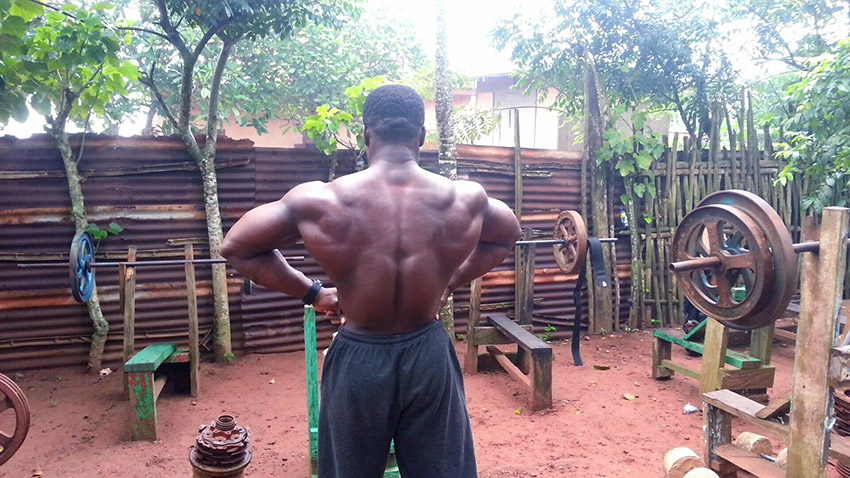 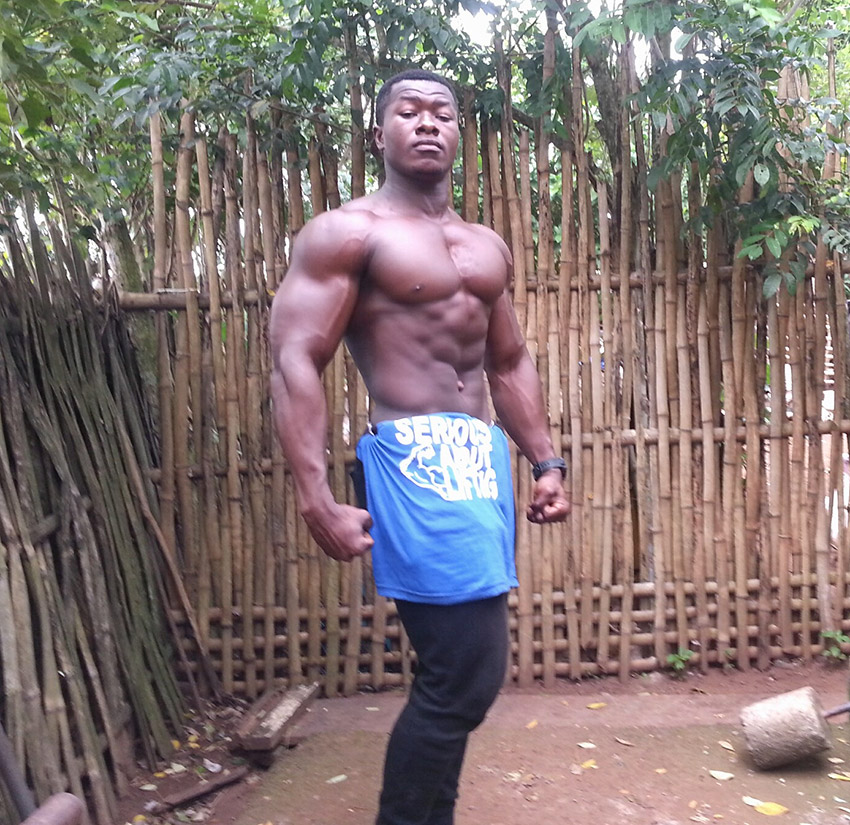 Samuel first got into fitness when his good friend “Reginald Okyere Mintah” invited him to train together in his local outdoor gym. Samuel started to get more involved in weight training from this moment onwards.

However, Samuel wasn’t always interested in weight training and fitness at first, but his friend kept pressuring him to join him in the gym.

Samuel asked his friend, “why do you keep asking me?”, Reginald said that looking at his frame and physique he would be very good at sports.

Building Up His Strength

The very first exercises Samuel did were for the shoulders and the arms. Samuel recalls, “The next day I couldn’t scratch my back.” His whole body was in pain so he chose not to visit the gym again, but his friend Reginald wouldn’t let him give up. He said, “pain is only temporary”.

After a few months of persistence and hard training, Samuel recalls people started to notice him in the street and would stare at his muscles.

“So from there, I saw that the iron is faithful and it never lies so I kept on lifting and now am 3 years 6 months in the sport of bodybuilding.”

The famous home-made gym first started with just scraps of metal, pipes, and concrete to form Samuel’s gym. Samuel says as they all live far from the city, they don’t have equipment to use, or gyms they can’t easily visit – So the only other alternative was to create their own.

“The reason why we improvised gym equipment is that we live far from the city where they have the real gymnasiums, and even if it were closer to it we wouldn’t be able to afford it after looking at the price, so that made us improvise ours.”

Apart from working out most days of the week, Samuel works as a construction laborer, bouncer for a nightclub, and a watch member for his local town. In his spare time, he likes to watch movies, do research on the internet about training and nutrition, and listen to music for fun.

Samuel’s hopes and wishes for the future would be to become one of the greatest bodybuilders of all time. He’d also like to build his own gym with real equipment and help to grow the sport in his home country. 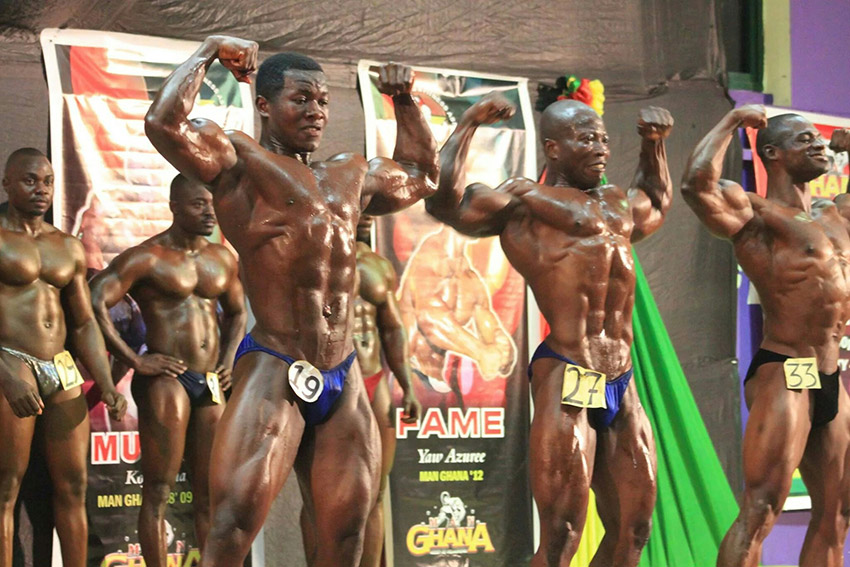 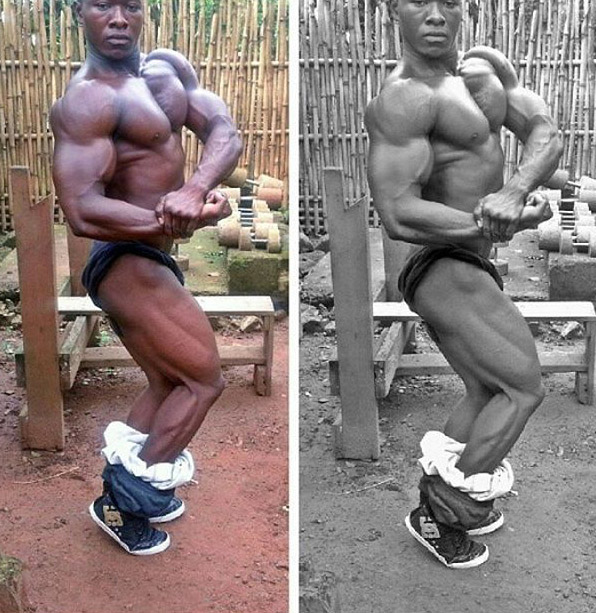 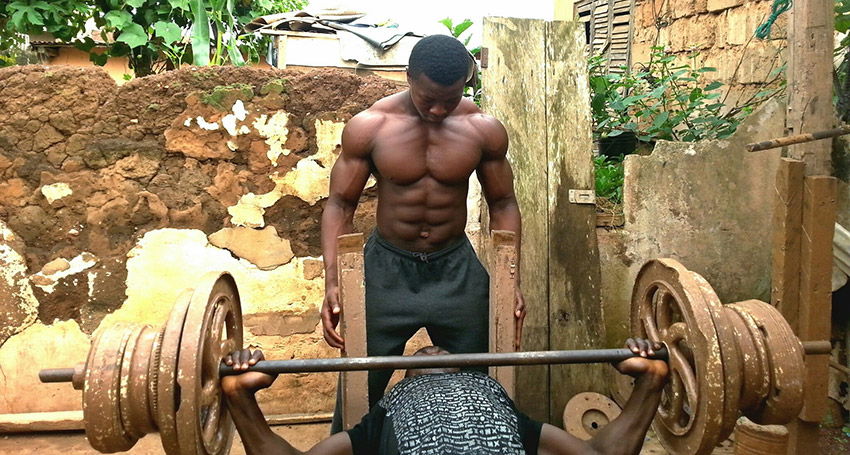 “My approach to training is a bit different because I don’t have a chart for my training like how most people do in working on a muscle group in each day.”

Samuels approach to training is different to most bodybuilders. He doesn’t have set days of the week where he’ll train each muscle group, however, he will make sure to work every body part throughout the week.

Sometimes he’ll train twice per day to shock his body to stimulate more growth, then he’ll go back down to one training session per day for maintenance.

For cardio, Samuel will normally do cardio first thing in the morning. His favorite forms of cardio are jogging or jump rope, he’ll perform this twice per week. 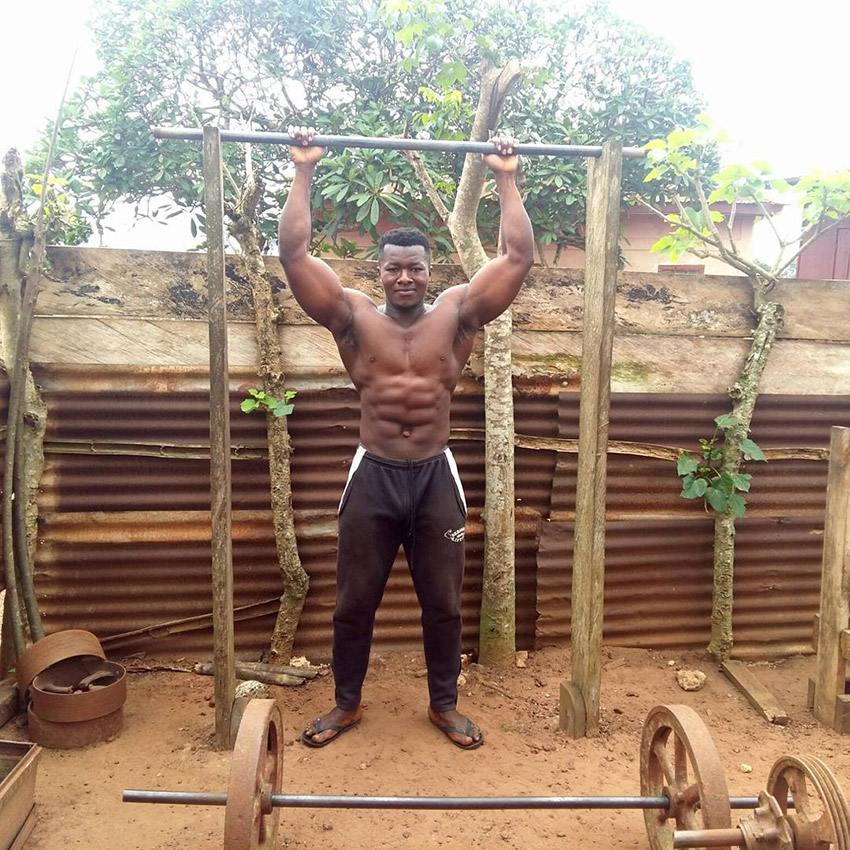 “I don’t party… but I do take a bottle of beer on my birthday which is annually so it doesn’t have any effect on my training.”

Samuel doesn’t count calories, he admit’s he doesn’t have too much knowledge when it comes to calories. However, he admits he’s a heavy carb eater, and he’ll eat 3-4 meals per day. 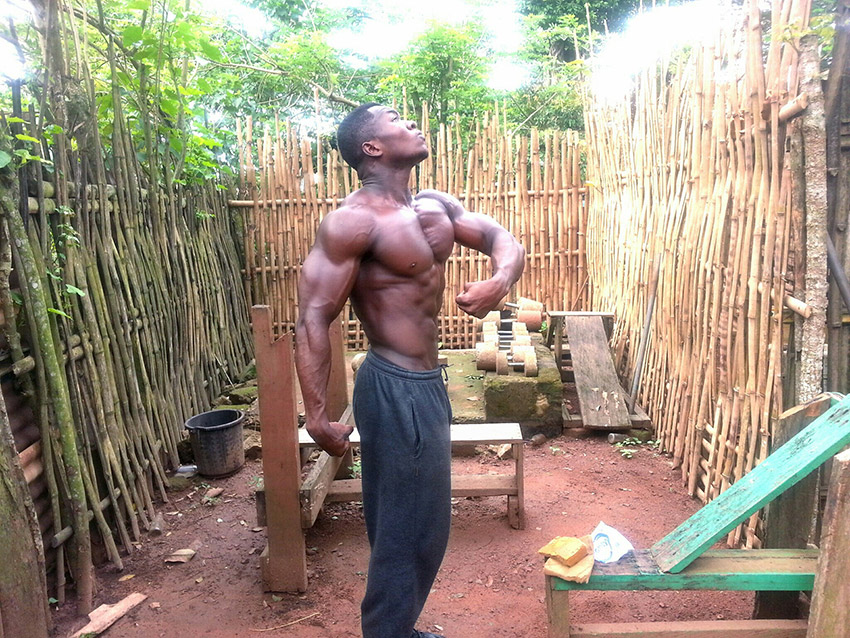 What we can learn from Samuel Kulbila

Samuel has proven that no matter what obstacles we face, or how difficult it may be to work-out regularly, he shows us that even with a few pieces of equipment made from scraps of metal and concrete, it’s still possible to build a ‘God-like’ physique.

With the same commitment to exercise and working out like Samuel, you too can build a physique of greatness.

Just shows us in the Western world how much time and effort we waste! This guy’s so resourceful and innovative building a gym out of scraps and never complains one bit!