Ronnie Coleman is a 8x Mr. Olympia winner. He’s regarded as one of the greatest ever bodybuilders, earning the nickname ‘GOAT’ (Greatest Of All Time).

However, he didn’t always dominate every show that he entered; between 1992-1994, Ronnie failed to win a single trophy. But he came back strong to cement his name in the history books. 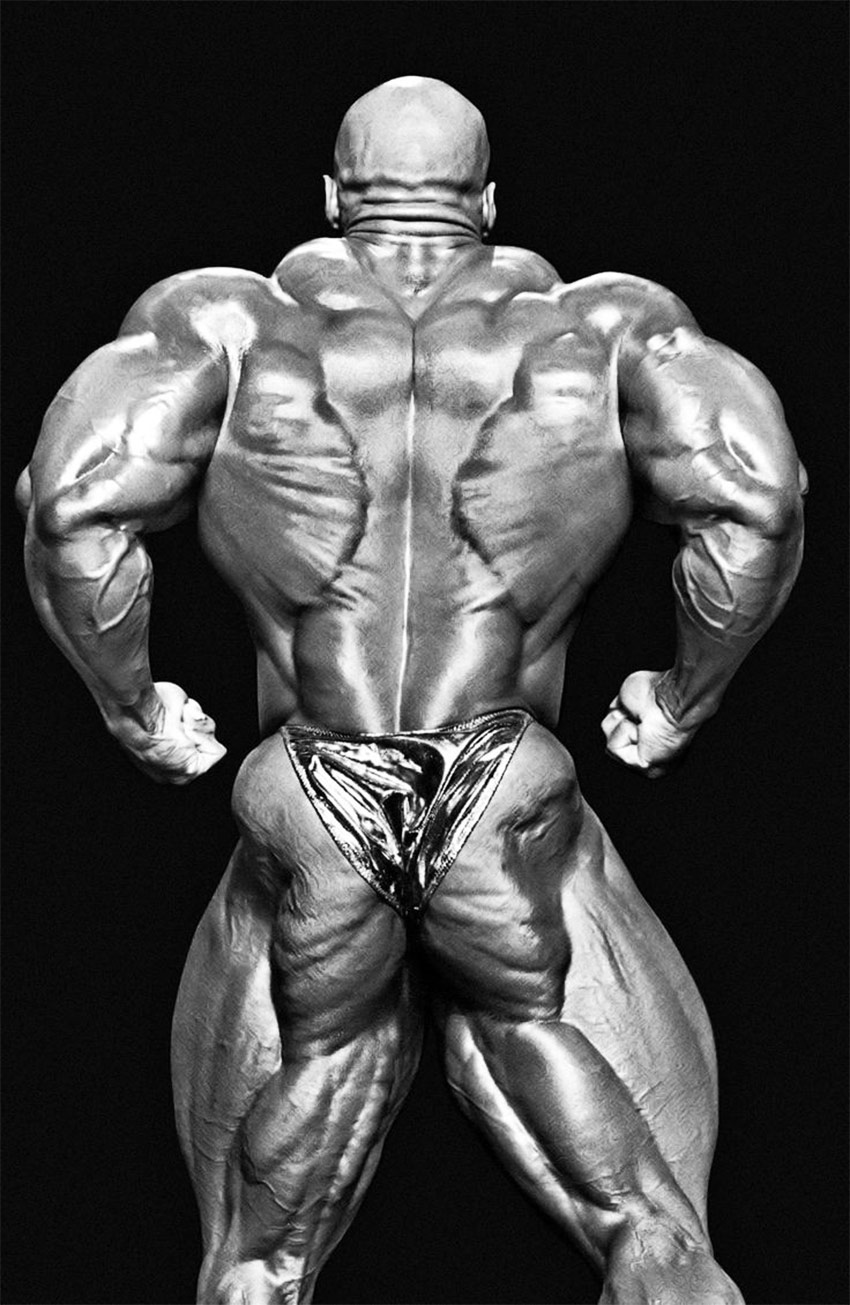 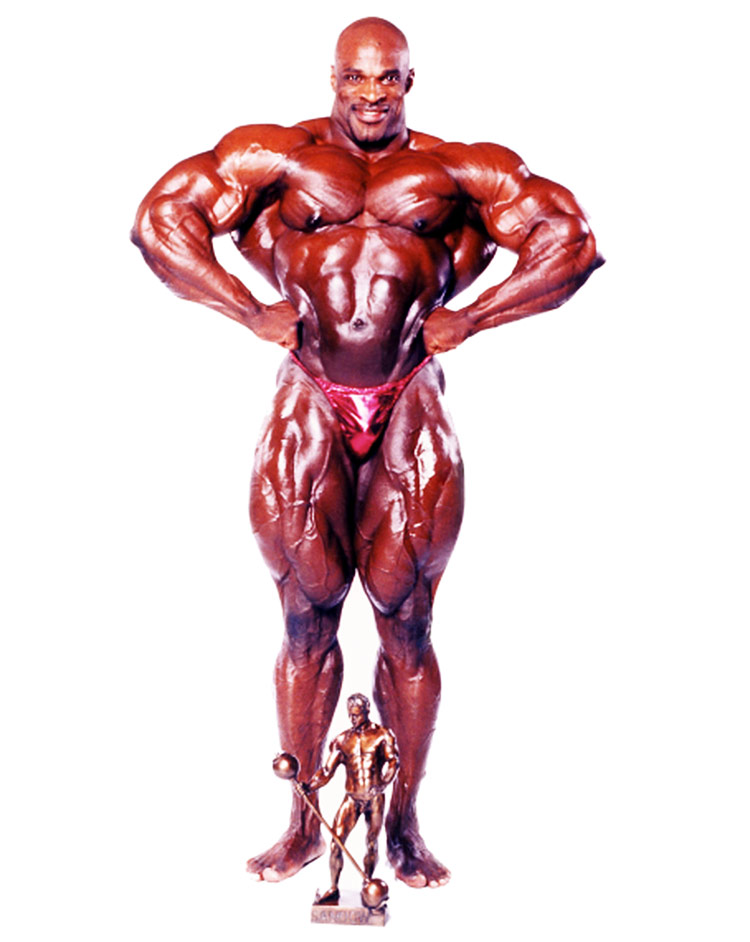 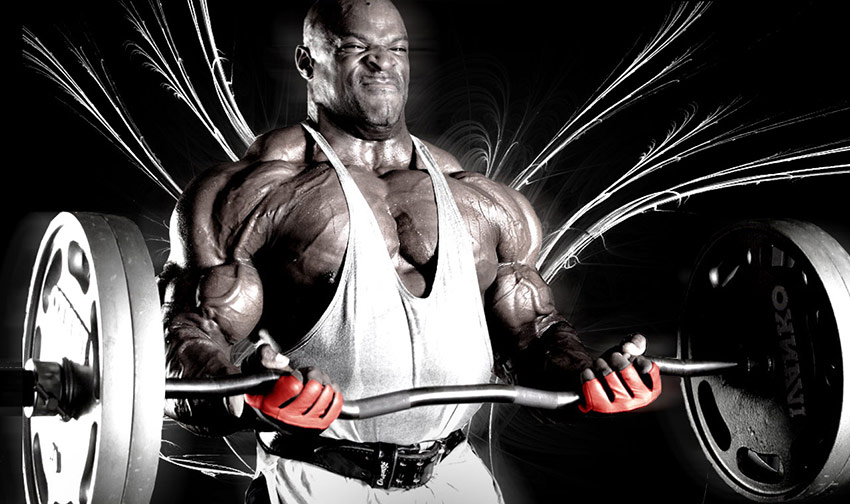 Born and raised in the Pelican State, Louisiana (USA), Ronnie was raised by a single mother – alongside a younger brother and two sisters.

As a very sporty child, he reached a high-level playing football during high school; his naturally bulky frame helped him power through others his age, and he became known for his imposing figure.

Due to his growing reputation in football, Ronnie became determined to stay stronger than his peers. He worked tirelessly to gain strength and size.

Ultimately, this is what motivated him to begin lifting weights and set out on his fitness journey.

After growing stronger in the gym, Ronnie’s performances as a football player improved even further. As a result, he was offered a scholarship to Grambling State University to study Accounting and represent their football team.

Ronnie accepted the offer, and spent the next 4 years at college; at this point, his plan was to become a certified public accountant (CPA). 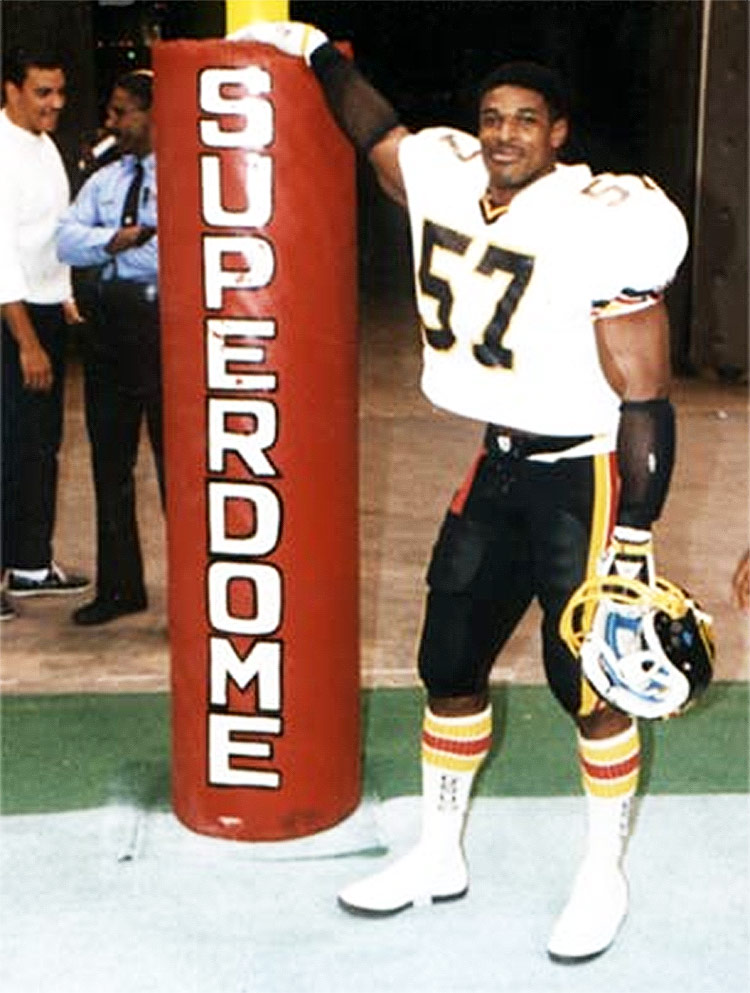 Ronnie during his time at college.

After earning his degree in Accounting, Ronnie made the move to Texas – he believed that there would be more job opportunities in the neighbor state.

However, he struggled to find a job, and ended up delivering pizza for a food company instead.

It wasn’t long until Ronnie became unhappy with his situation; he knew that he was destined for bigger things, and began searching for other professions.

“Domino’s was the hardest job I ever had. I dreaded every day working there, but I knew I was destined for something better.”

During his hunt for other jobs, Ronnie found an opening at the Arlington, Texas police station in the newspaper. Soon after, he’d applied and successfully gained his new job in 1989 – at the age of 25.

Ronnie continued to train in the gym, managing to fit weight lifting around his new lifestyle in the police force; fortunately, the police station was equipped with a private gym.

It was here that he was encouraged to join another gym, after growing too strong for the limited equipment available at the police station. As a result, Ronnie signed up to the Metroflex gym down the road, where he was quickly introduced to the owner, Brian Dobson.

Brian took a keen interest in the promising athlete after realizing his potential to succeed as a bodybuilder. He offered Ronnie a lifetime free membership if he allowed Brian to train him for a competition.

This was enough to convince the future champion to enter his first show. He began his intense preparation, getting ready to step on stage for his debut. 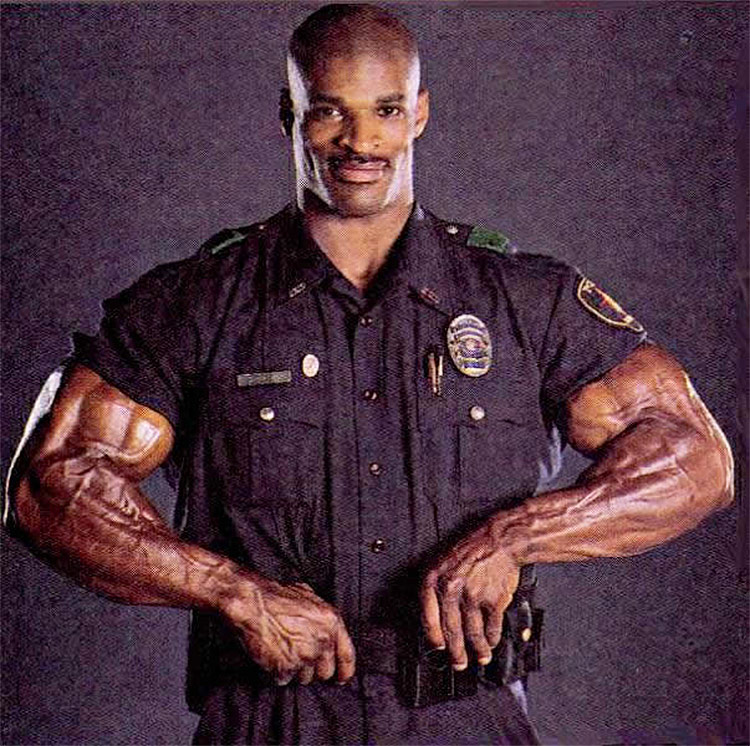 A few months under the guidance of gym owner, Brian Dobson, and Ronnie was in prime condition to start his competitive bodybuilding career. He turned up at the 1990 Mr. Texas show as an unknown amateur.

However, Ronnie’s hard work and determination meant that he walked away with his first trophy, at the age of 26  – beating his coach, and many other more seasoned athletes in the process.

Riding high from his first victory, Ronnie realized his potential to succeed in the industry. He wasted no time, and entered another contest that year – the 1990 NPC Texas Championships.

But he couldn’t continue his dream start. Ronnie placed 3rd behind the likes of Jerry Rodgers and Edgar Fletcher; it was this competition that convinced him to take time away from the stage, to further develop his physique. 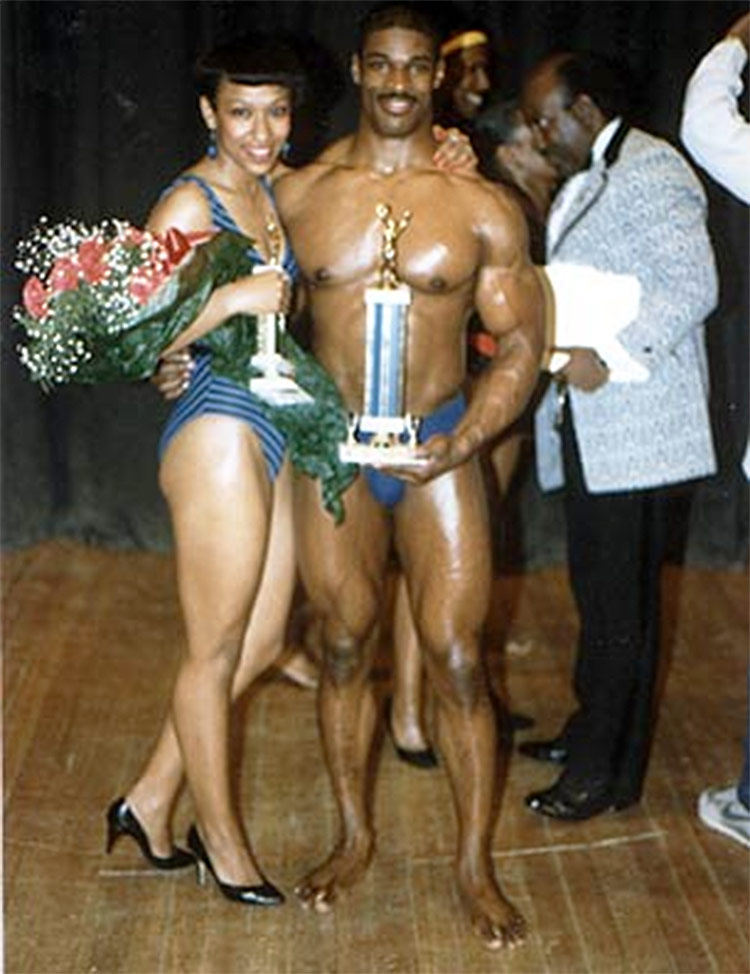 Ronnie after winning the 1990 Mr. Texas.

After taking the rest of 1990 away from the limelight, Ronnie made his return, determined to beat the more experienced athletes on stage.

Being naturally gifted, he’d managed to build formidable arms – which other athletes acknowledged as being ‘Mr. Olympia standard’, a high compliment for an amateur.

With this encouragement, Ronnie entered the 1991 World Amateur Championships, travelling to Poland in the hope of making a name for himself – and that’s exactly what he did.

The judges were impressed by Ronnie’s physique; he overshadowed his competitors, and was consequently awarded with the 1st place trophy. But that wasn’t all.

By winning his biggest show yet, Ronnie had earned the prestigious Pro Card – becoming a professional bodybuilder at the age of 27. 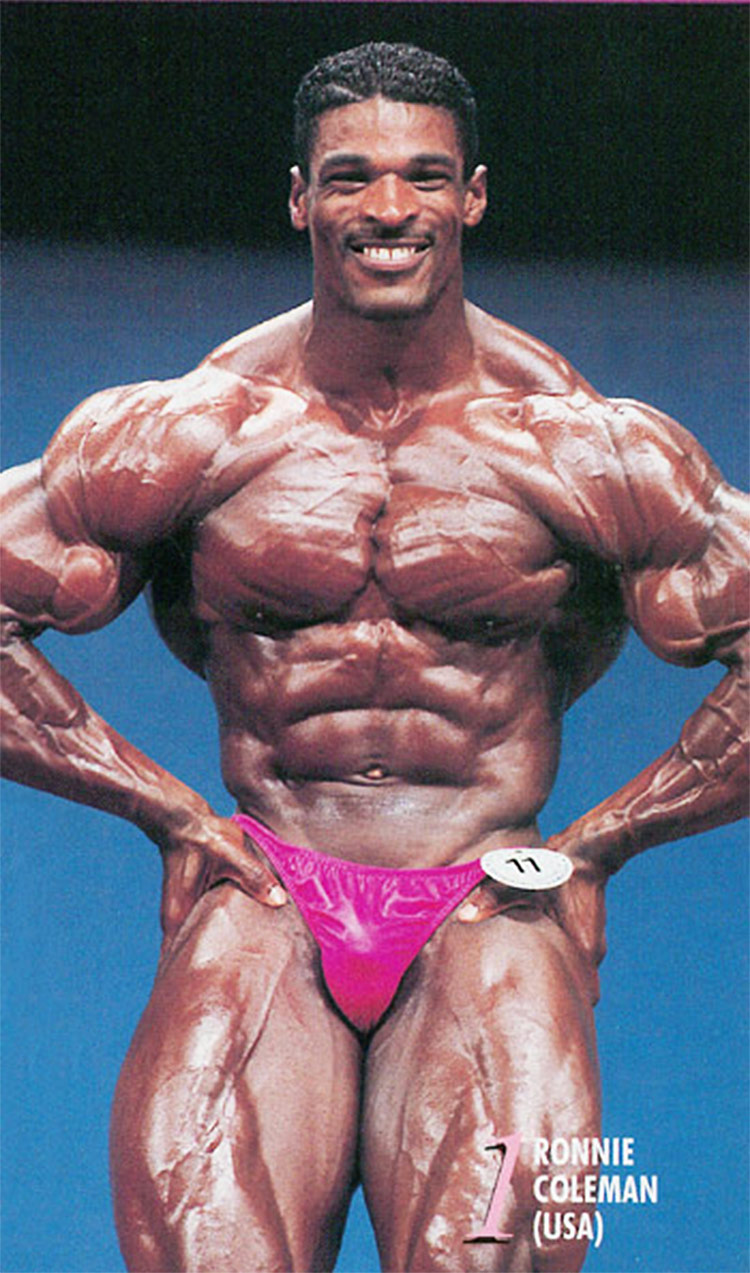 Ronnie on stage at the  1991 World Amateur Championships.

Life As A Pro

Ronnie didn’t have an easy start to his professional career. His first show was the 1992 Chicago Pro Championships, which featured a strong line-up – including the likes of; Bob Paris, Kevin Levrone, and Milos Sarcev.

He placed 11th, which set the tone for his next 3 years.

Not one to give up, Ronnie continued entering shows; he didn’t let his lack of success get in the way, and eventually his motivation to win paid off.

In 1995, at the age of 31, the future legend appeared in the Canada Pro Cup. This show was filled with another star-studded line-up, but this time, Ronnie managed to beat his opponents.

Overtaking such athletes as Rich Gaspari and Milos Sarcev, Ronnie finally took home his first trophy as a professional bodybuilder. This victory thrust him into the spotlight, and he became seen as one of the upcoming stars of the future. 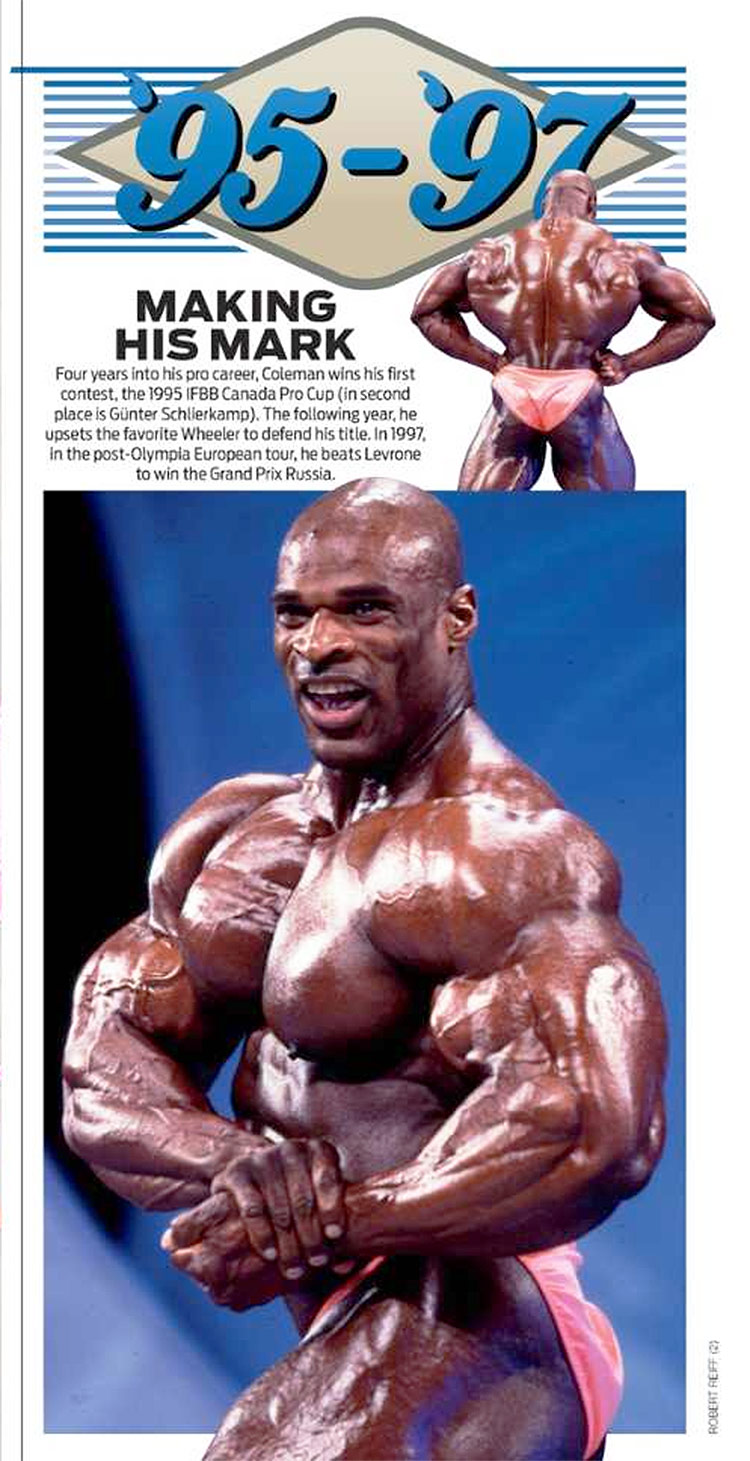 Over the next 10 years, Ronnie experienced a winning streak, dominating most competitions he entered – he walked away with 24 trophies, becoming almost unbeatable in his prime.

During this period, he wrote his name into the record books; Ronnie matched Lee Haney’s record by winning the prestigious Mr. Olympia show 8 times.

By consistently beating the likes of Flex Wheeler, Shawn Ray, Kevin Levrone, Lee Priest, and Jay Cutler – Ronnie became known as one of the greatest bodybuilders in the history of the sport.

After a record-breaking 15 years spent competing at the highest level, Ronnie made the decision to retire after the 2007 Mr. Olympia.

“This is it for me at the Olympia, and September 29th will be the last time I step on a Mr. Olympia stage. I want to thank God, my family, my friends, all the great fans who have supported me over the years.”

Ronnie left the sport as a legend, beating Arnold Schwarzeneger’s Mr. Olympia record, and cementing his name among other idols. 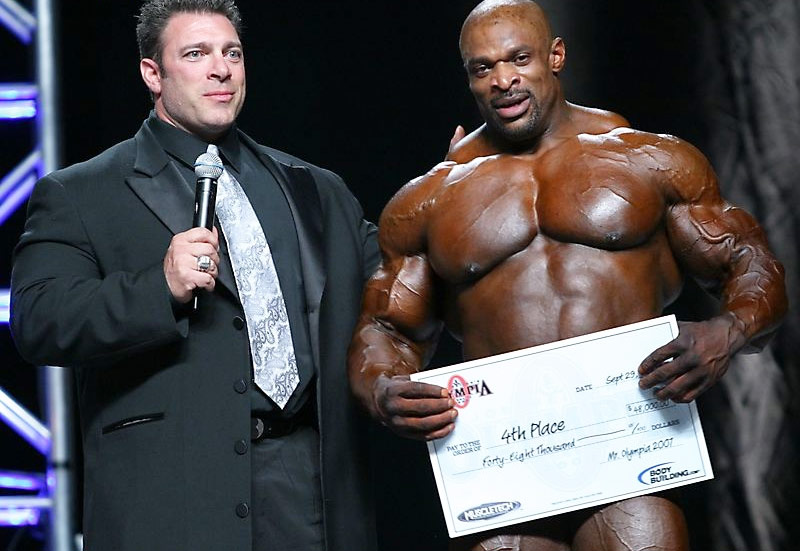 Ronnie making his retirement speech after placing 4th at the 2007 Mr. Olympia.

After his retirement, it was clear that Ronnie’s heavy-lifting during his intense training sessions had damaged his body. By 2016, the 8x Mr. Olympia winner was forced to endure 7 operations on his back – including a gruelling 11 hour surgery.

As a result, the 8x Mr. Olympia champion had to cope with living in a wheelchair for a period of time.

However, he didn’t let this get him down; Ronnie believed that what he achieved as a bodybuilder, will always outweigh any negatives in his life.

“Do I have any regrets? If I had a chance to do it all over again, would I change anything? Yes – one thing.

That is when I squatted 800lbs. I would do 4 reps, instead of 2. That is my only regret in my career”

After his retirement, Ronnie was keen to stay involved in the fitness industry. As a result, he decided to create his own supplements company – who market a range of products from fat burners to pre workouts.

Ronnie has also made frequent appearances at bodybuilding expo’s around the world, meeting and greeting his millions of fans (as well as promoting his company) – inspiring them to realize their dreams. 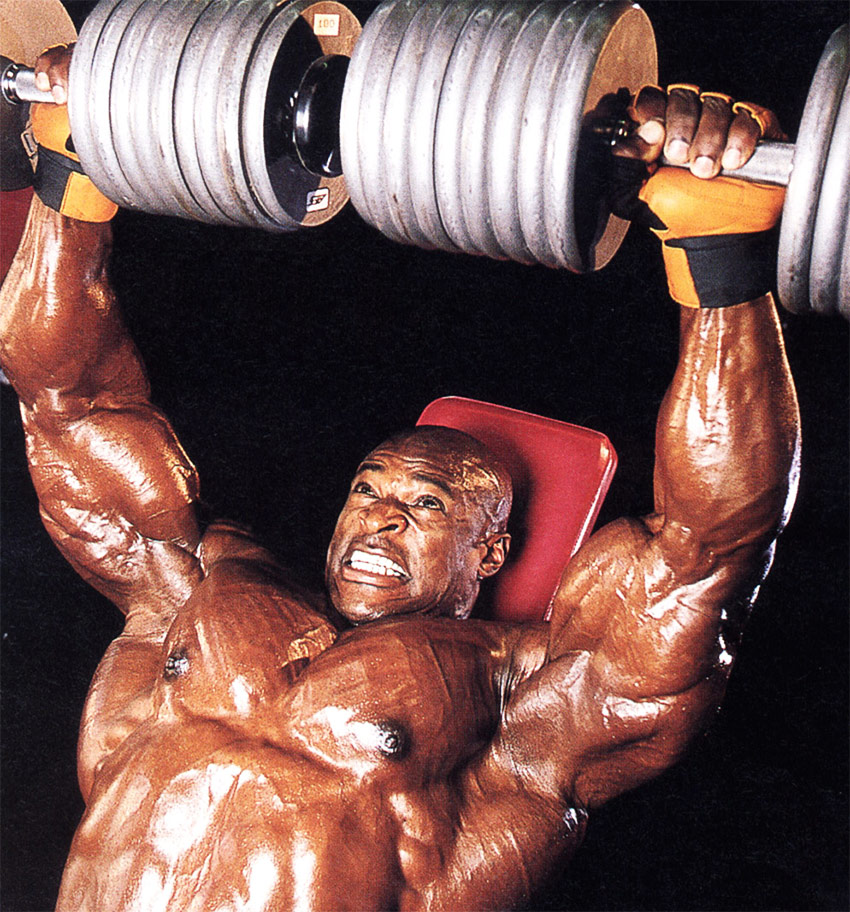 Ronnie hadn’t developed a monster-sized physique by chance; he worked rigorously in the gym to build his size and strength.

Although he was known to complete 1 rep max’s with enormous weights, Ronnie performed mostly 3 sets of 10-20 reps on a daily basis – he was aware that lifting big all-the-time would have damaged his body and cut his career short.

The 8x Mr. Olympia winner trained for 5 days per week, allowing himself a rest on the weekends to enjoy his personal time and recover.

In his prime, Ronnie Coleman’s training plan looked like this: 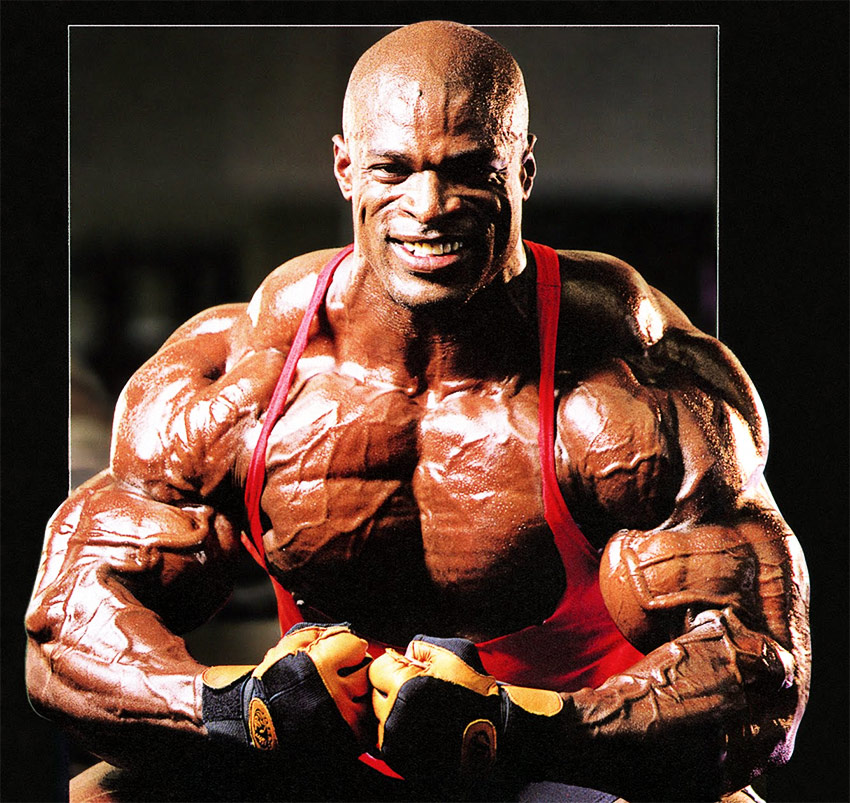 In order to fuel his massive physique, Ronnie would feed up to 9 times per day – starting at 10:30am and finishing at 1:30am. 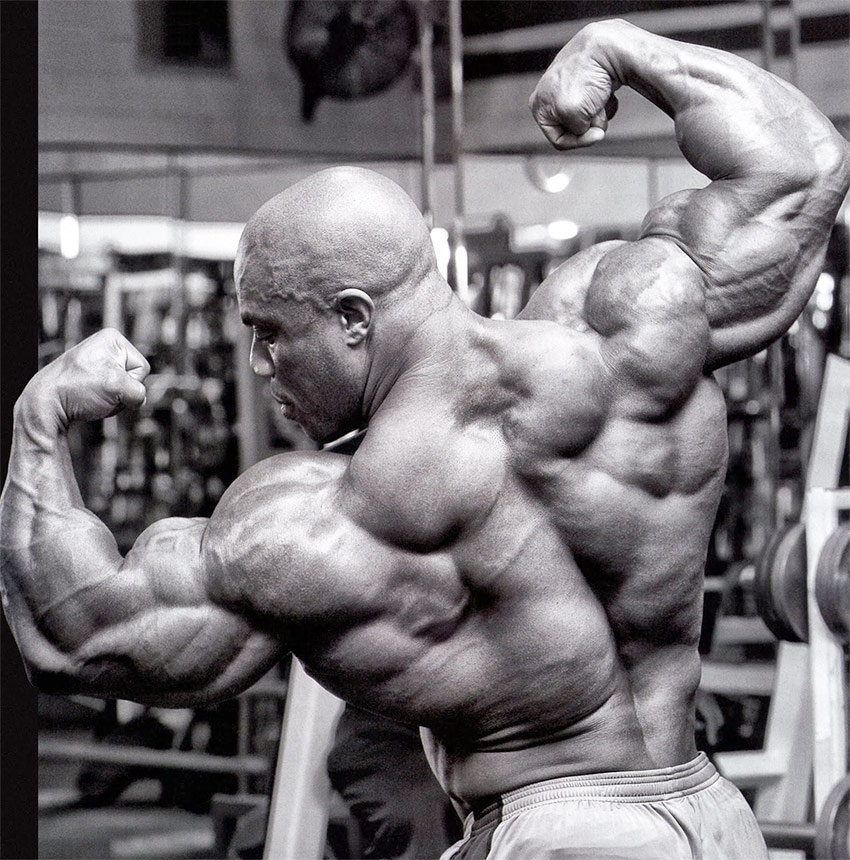 Ronnie names Brian Dobson as a key influence in his success; Brian convinced him to compete as a bodybuilder, and guided him to his first trophy (as well as letting him train at his gym for free).

However, most of his motivation comes from within – ultimately, it was himself that pushed past the setbacks early in his career and continue training with the highest intensity. 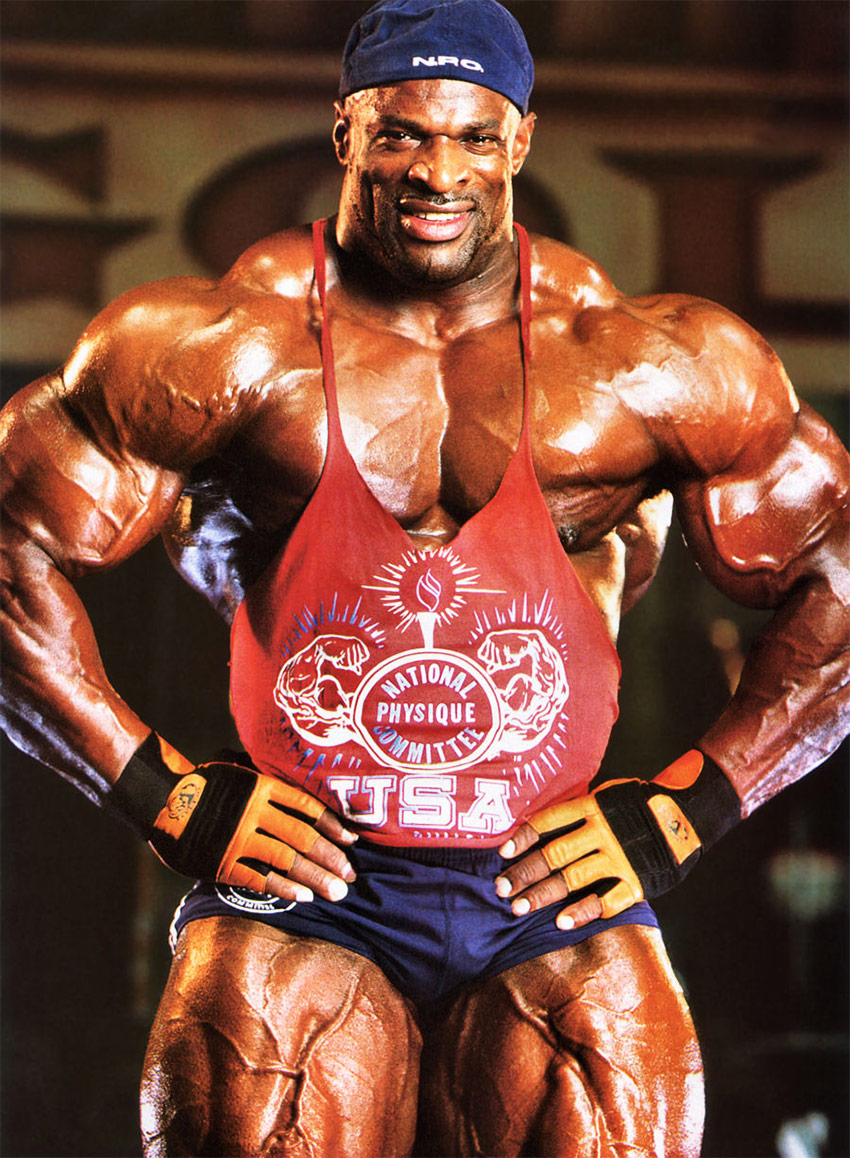 What We Can Learn From Ronnie Coleman

One asset helped Ronnie’s journey to the top – determination.

He was naturally gifted and had a great start to his career, by taking home a trophy in his debut show (1990 Mr. Texas). However, from 1992 to the end of 1994, Ronnie didn’t win any shows – his best achievement was placing 3rd during this period.

But he didn’t give up. Instead, Ronnie pushed his limits everyday in the gym, sculpting a better package every year.

Ultimately, this is what made him an 8x Mr. Olympia winner – and is the reason why he’s known as one of the greatest bodybuilders of all time.

With the right determination and mind-set, anyone can realize their dreams.

[…] once she delved further into the world of bodybuilding, she was motivated to become stronger by Ronnie Coleman and Dana Linn […]

My idol and the bodybuilding god(Ronnie coleman)

Ronnie, this is Coach Cole. I had the opportunity to Coach you at Bastrop High School.
Coach Stuart and I had the opportunity to watch you enter your first bodybuilding competition in El Dorado, Arkansas.
I have told many a person what a great young man you were, and still are.
I am the Head Football Coach at Riverfield Academy in Rayville, La.
if you ever make it down here, I would love to hear from you.

Ronnie Coleman name’s Johnny Coe from reno I have always looked up to you. It all started in Vegas where I met Jay Cutler he was at the gym golds where I train and I told him how good he looked and he looked at me and said do I go to your job and interrupt you. Ronnie ever since then I started watching mr Olympia and was glad every time you won. Ronnie I’m 37 years old I weight 262lbs but I’m 6ft2in is it to late for me to compete always wanted to do a show but I never really feel big enough but you know that’s what goes with bodybuilding you always think you’re smaller than you really are well I do anyway hope you enjoy retirement Ronnie God bless

Yes he did. He finished 4th.