Reg Park is one of the greatest bodybuilders in the history of the sport. He created the “Golden Six” routine that has become a staple for beginners in the gym.

Through his charisma and charm, Reg inspired the golden age athletes – he became Arnold Schwarzenegger’s idol and mentor.

He was also one of the first bodybuilders to become a movie star. This is his story: 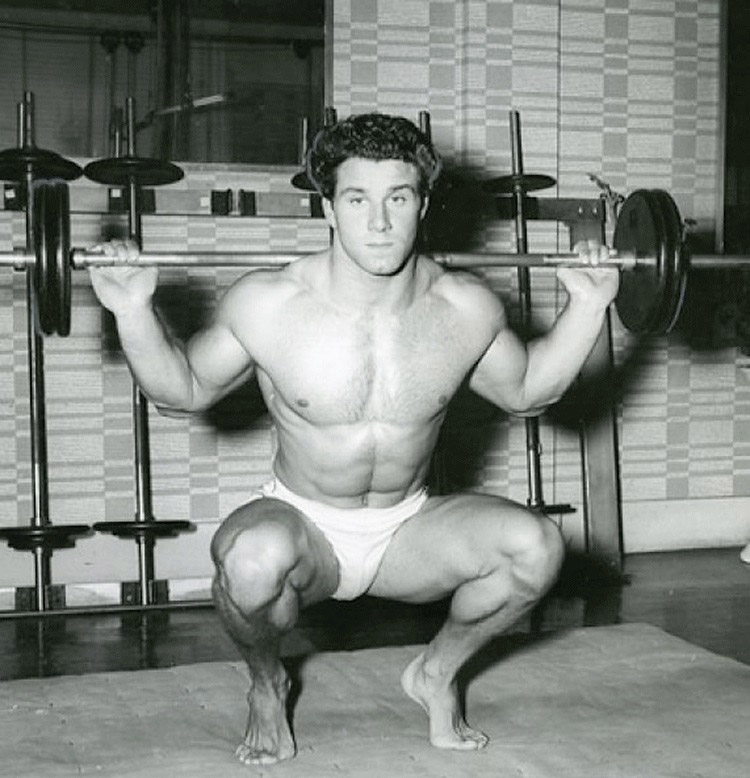 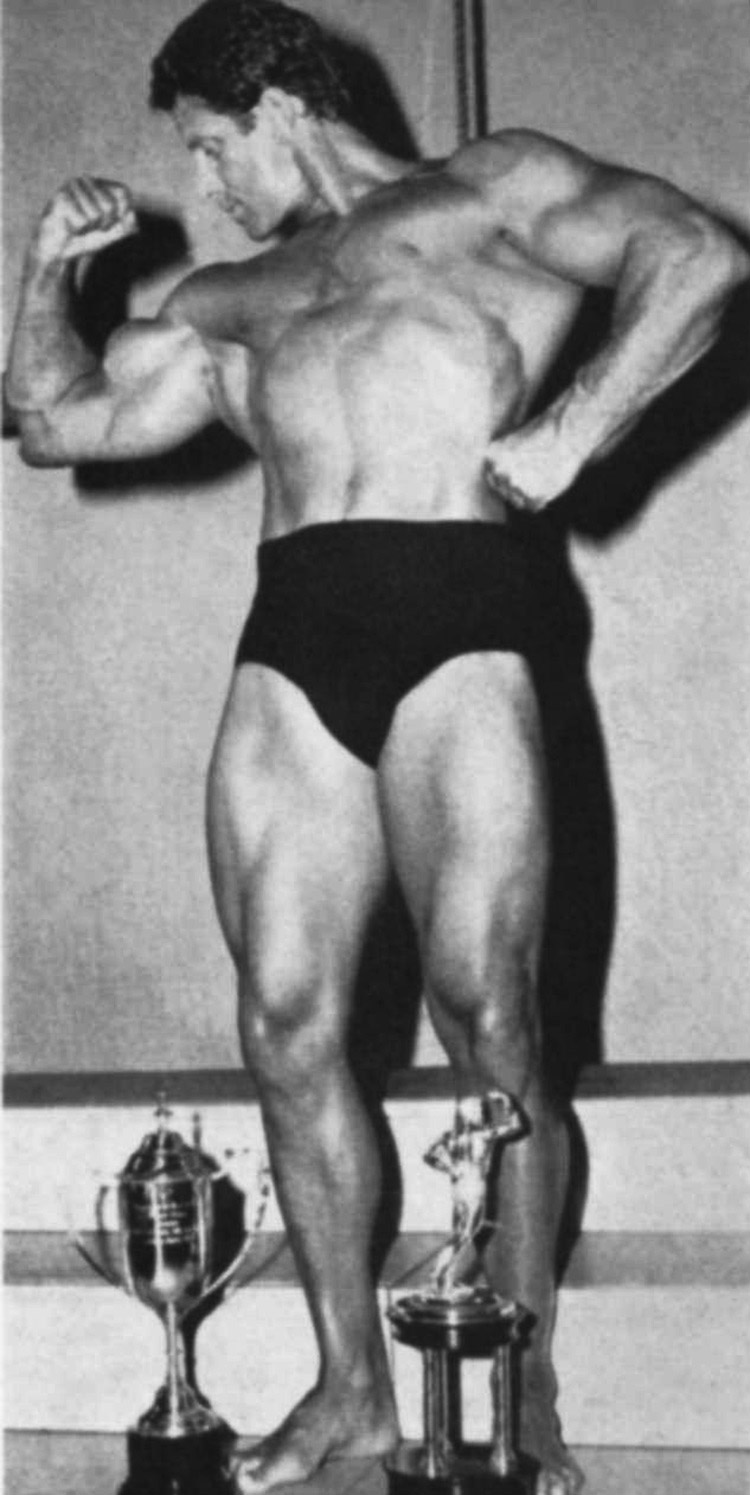 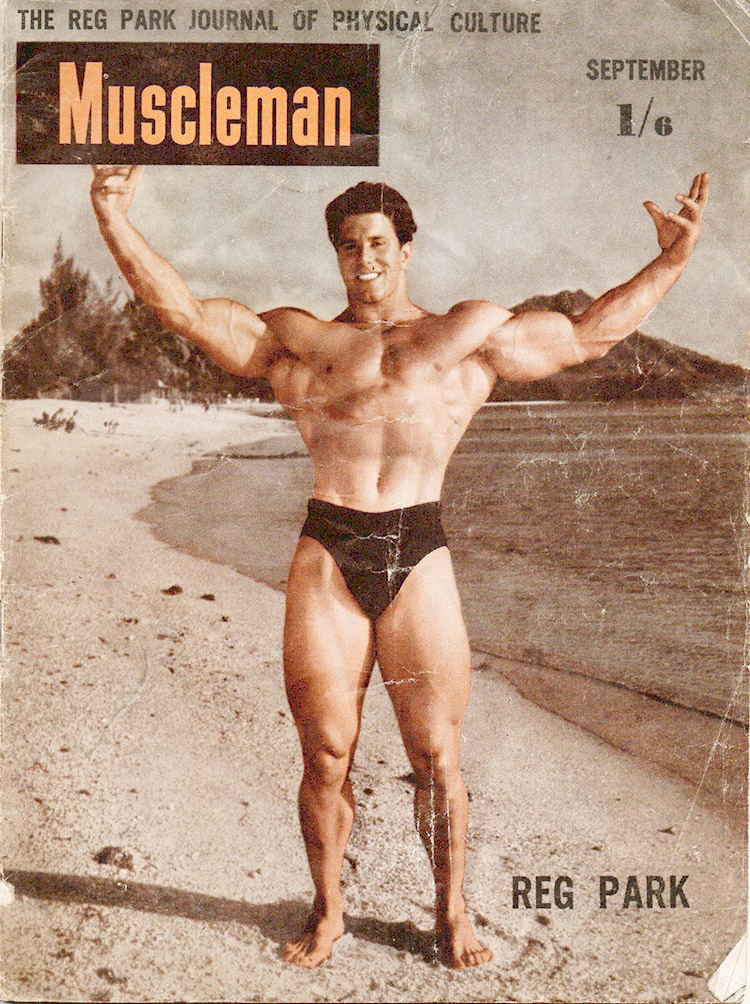 Even as a child, Reg always had a passion for fitness. He was a keen soccer player, representing Leeds United in the reserve team during his teenage years.

However, at this point, Reg didn’t have any interest in becoming a bodybuilder.

In the early 1940’s, Reg suffered a career-ending knee injury which ruled him out of soccer. This was a devastating blow to the youngster.

However, while using weights during his rehabilitation, Reg encountered a bodybuilding magazine. He was in awe of the athletes’ physiques.

At this point, he set his sights on sculpting a body similar to his new heroes. 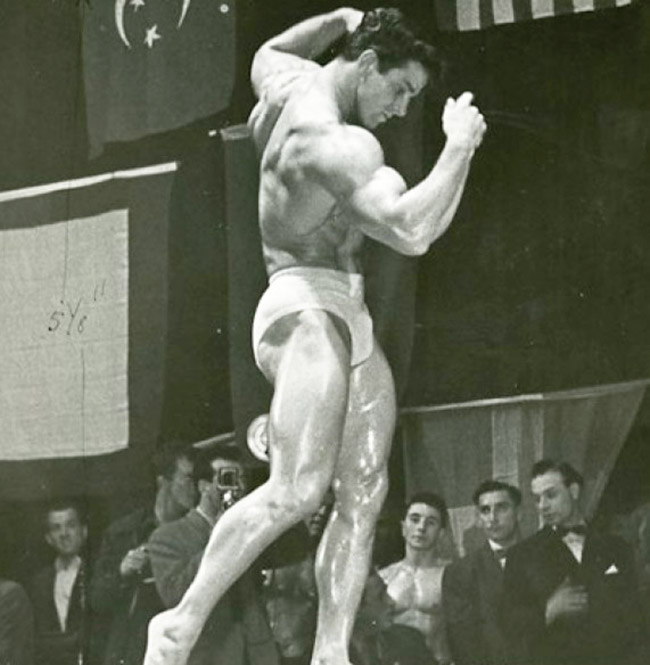 At 16, in 1944, Reg met David Cohen – a local bodybuilder in Leeds. He was fascinated by David’s huge physique and was invited to work out with him.

For the next three months, Reg was taught how to lift weights properly and how to sculpt his body. It wasn’t long until he’d began training with dumbbells, barbells and a pull-up bar.

The future icon had embarked on his journey to the top of the industry.

By 1949, he’d achieved an incredible physique and entered his first competition that year.

After 5 years of intense training and dieting, all of his hard work paid off.

He walked away with the trophy and the title of Mr. Britain, earning his first taste of success. But this was just the beginning.

Not long after his victory, at the age of 21, Reg made the big decision to move to America. He spent six months working hard to improve his body, and was eventually noticed by Joe Weider.

Joe was impressed with Reg’s physique, and he was featured in numerous magazines – this publicity was key in Reg making an impact in the U.S. 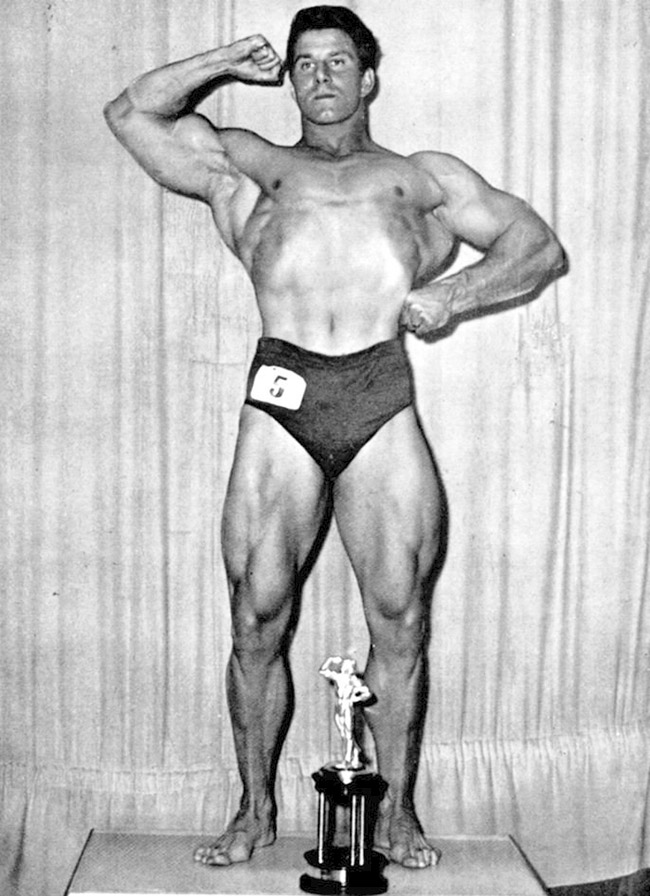 In 1950, at the age of 22, Reg stepped on the stage of the NABBA Mr. Universe Amateur competition. He didn’t add to his victory, but he came second only to the great Steve Reeves.

Although he won the Mr. Europe contest that was held in conjuction to the Mr. Universe, Reg knew he had to step his game up – he began training for 3 hours a day, determined to take home the trophy.

A year later, at 23-years-old, Reg came back strong to win the 1951 NABBA Mr. Universe show. By winning this competition, Reg had broken the history of Americans winning the show.

Reg was putting England on the map for bodybuilding.

Break from competing and Magazine

After his win at the 1951 NABBA Mr. Universe, Reg decided to take 7 years away from the limelight. During this period, he started numerous bodybuilding magazines, busy running his businesses.

He sold a variety of items through his magazine, such as barbells to supplements. However, Reg missed being on stage and began making plans for a comeback. 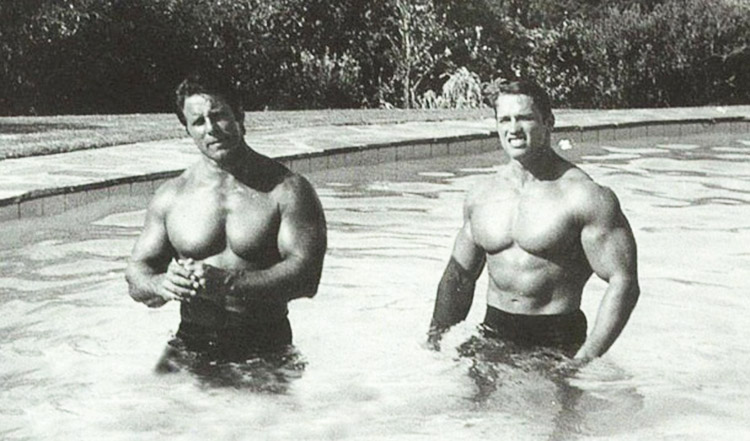 In 1958, at the age of 30, Reg made his return to competitive bodybuilding. He competed in the Mr. Universe that year, strengthing his legacy with a unanimous victory.

After gaining recognition from winning the Mr. Universe shows, Reg set his sights on becoming an actor. In 1961, he realized his ambition by featuring in “Hercules and the Captive Women”.

Reg appeared in a further 4 films, becoming one of the few bodybuilders making a name for themselves as a movie star at that time.

Over the next 15 years, Reg appeared in a further 4 shows. He added to his list of wins in 1965 at the Mr. Universe, but was unable to take home any more trophies afterwards.

But by this point, Reg had become a legend of the sport. He began to give back to the industry by mentoring rising stars, most notably Arnold Schwarzenegger. 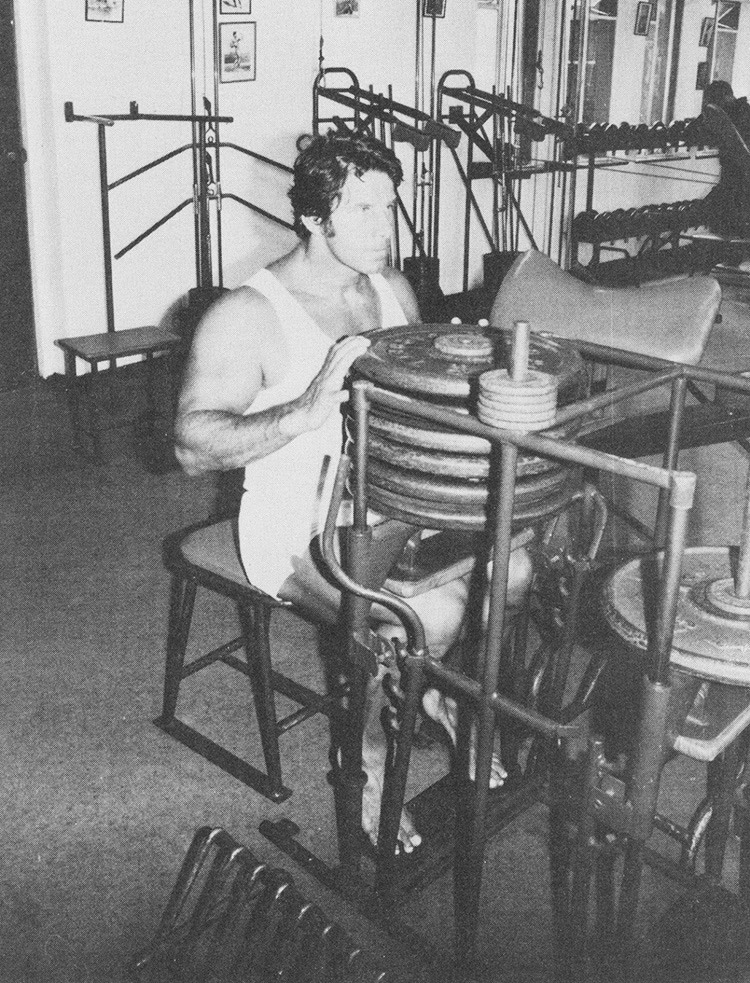 At his peak, Reg trained for 6 days per week, but often changed his routine to experiment what worked best for his body.

He worked each muscle group for around 1 hour and practised costal breathing in between sets.

Triceps
– French Press – I did these standing and lying on the bench.

Waist and Trunk Area
– Leg Raises and Side Bends 100 or more Reps.

Reg was known to eat copious amounts of food to fuel his body. His favorite meal was steak, which he often consumed twice a day – he also ate a dozen eggs and drank 8 pints of milk daily.

His favorite meal was steak, which he often consumed twice a day – he also ate a dozen eggs and drank 8 pints of milk daily.

Meal 3 – Chicken with baked potatoes and salad, 1 pint of Milk

Meal 5 – Chicken with baked potatoes and salad, 1 pint of Milk

Meal 6 – Vegetable soup and salad and 2 pint of Milk 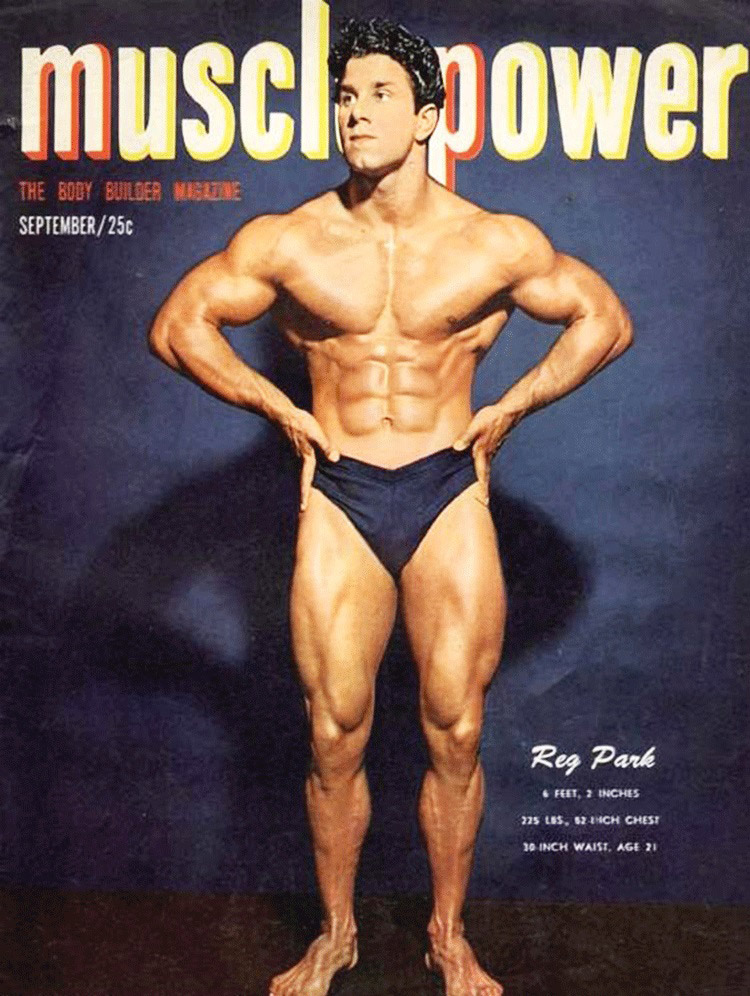 Reg was initially inspired by a bodybuilder in his home city, Dave Cohen. However, he names John Grimek and Steeve Reeves as his idols during his career.

However, he names John Grimek and Steeve Reeves as his idols during his career. 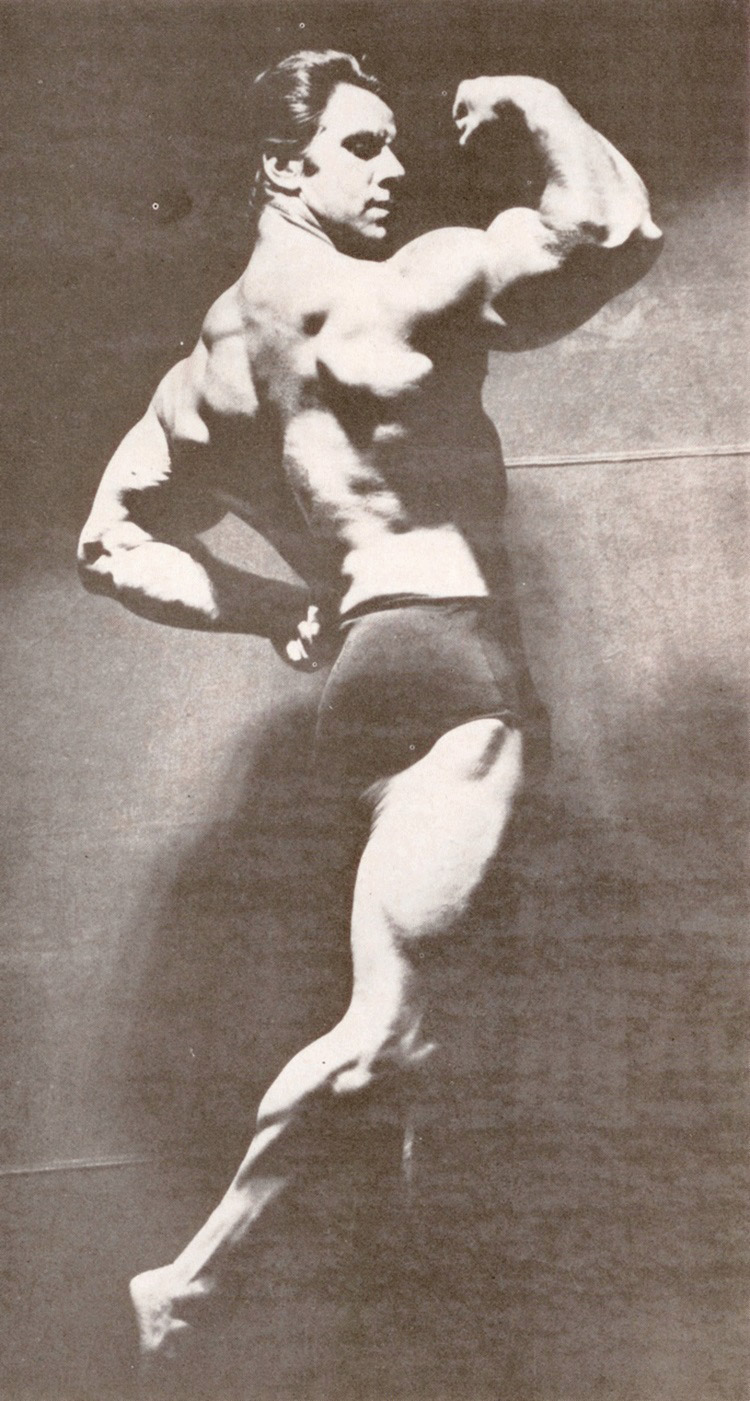 What we can learn from Reg Park

Reg has taught us to always chase our dreams. He entered the world of bodybuilding after reading a magazine and finished his career as a legend of the sport.

He always aimed to better himself, even successfully acting in numerous films. Reg is remembered as one of the greatest bodybuilders in the history of the sport.

Reg didn’t eat six times a day. Complete B.S. Also believed in eating only when the body felt hungry and not to over eat. The sample menu is what is screwing every body up and getting them fat.

Thank you for your comment. Our sources tell us that Reg would consume large amounts of food on a daily basis, especially during his muscle building phases. Reg often said; “I liked to eat like a king”.

It would be great to know where you got this information from, we’d happily add it to Greatest Physiques. Do you have link? or any other sources we can reference to?

Reg was a class act. I used to train at his gym in Johannesburg in the 80s and 90s and we chatted when he worked as a personal trainer at the Virgin gyms in the 2000s. He was always friendly, never aloof and willing to share his knowledge on working out.

My favourite bodybuilder. Perfect in every way – both physically and in terms of character.

I knew and spoke with Reg Parks in early 1950’s. I was interested in body building and as I was an assistant chemist in Redfern’s Rubber Co.Hyde, I saw Reg often. He was always very friendly and once spent some time talking with a young lad who had been injured during time in the army and was desperately trying to get really fit….nice gesture.Met Steve Reeve’s, another nice fella, in London, he and John Grimek were great, but Reg was The Man.Taking his advice as to diet, it was difficult to follow as I was called up to work for H.M., but by ‘borrowing’ sample meals did finally bulk up but not enough to alarm the enemy!.
Am 85 yrs old, am still 60 kilos since I was 20 hrs old and spend every single day doing some exercise and swimming, take full medical checks annually and still feel great…apart from a prostate which acts as a ‘Get Up’!!
Retired after 30 years after attending some 15,00o fires both in U.K. retired as Chief Fire Officer, Hong Kong after 23 years. Had three seperate accidents copping fractures to 1/2 and later same to 4/5 injury and torn ACL / medial ligaments but my fitness levels helped me return to active duty for sure. Am pleased to say that they never bother me?…”where there is no sense, there is no feeling”.

Reg Park was and always will be my true role model and a inspirational bodybuilder for all of eternity. Eversince I heard of him and his big heart and family man behavior, I have been in awe of this Legend. I am now 40 years old and I still love to follow his grueling 5×5 workouts and eating Big just like he did. He was so right, the only true way to get big is to lift and eat big otherwise I hate to say it but your just wasting your time I hate to say. Reg, will be remembered forever. God Bless

The Bodybuilders of the 50’s and 60’s were the greatest before STEROIDS ruined the sport.

Dear greatestphysiques, do you have Reg Parks complete stats? Neck, Shoulders, Arms, Forearms, Chest, Waist, Thighs and Calves? In my opinion Steve Reeves And Reg Park are icons and an example for anyone that came after them in the sport. I wish todays bodybuilding would go back to this physique and stop being the freakshow it is today.

I had the honour of being trained by Reg,for my cycle racing when I went to his gym in Johannesburg in the eighties.I still have the schedules he wrote for me. He was a great man in every sense,and showed me the legpress machine ,fully loaded,and with me standing on the weights. He carried on as if I wasn’t there,such was his strength.