Nick Scott is an American IFBB professional wheelchair bodybuilder, currently residing in Ottawa. In his high school days, Nick’s prospects for the future looked promising, after he began to make a name for himself as a formidable American football player. But at the age of 16, that would all change.

Nick was in a serious car accident that would leave him wheelchair-bound for the rest of his life. He was informed bluntly by doctors that his football playing days were over, and that he would never walk again. Hitting him hard, he soon fell into a downward spiral, becoming overweight and suffering from depression in the process.

However, Nick eventually propelled to fame after overcoming his darkest days – reigniting his fitness journey. Eventually, he began sharing his story with others, hoping to bring wheelchair bodybuilding into the limelight.

Nick was able to achieve this, becoming an inspiration to many people across the world. He aims to be a positive influence in people’s lives, spreading his message: “Life can change in an instant. So follow your dreams, and become who you really want to be”. This is his story: 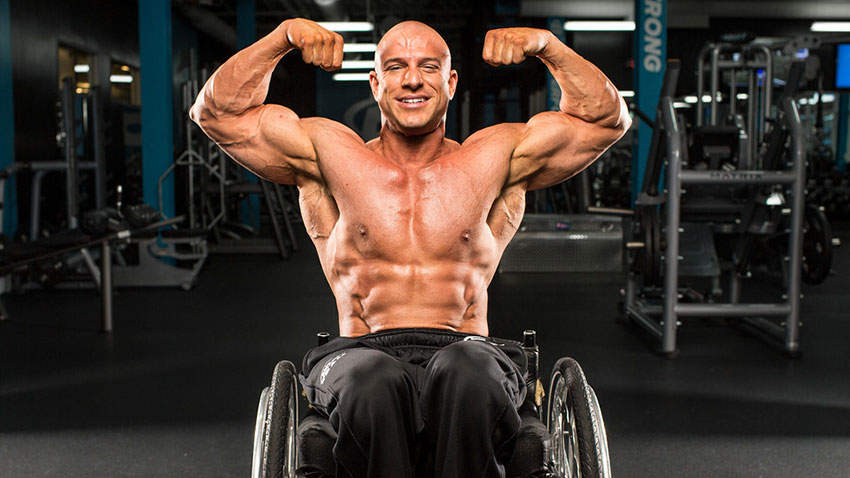 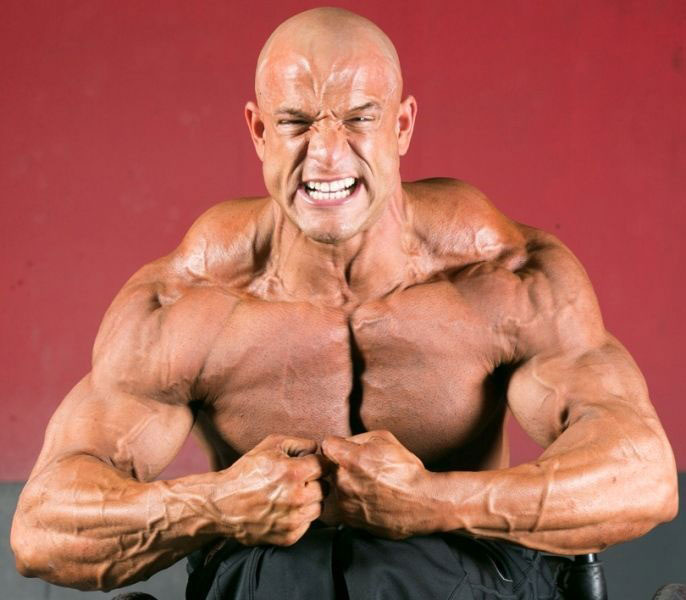 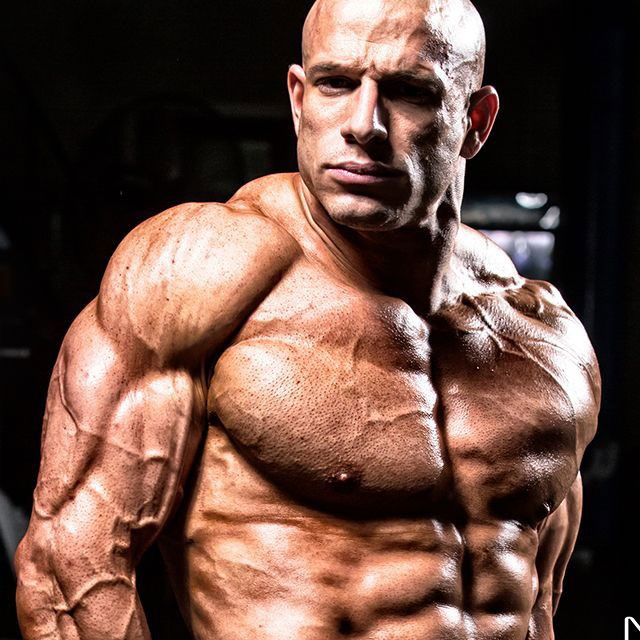 Throughout his early years in high school, Nick Scott was very much a normal teenager. His fitness journey started at an early age, when he became highly interested in sports – in particular American football.

Nick turned to sports as a way of impressing girls, and playing American football allowed him to do this. Eventually, Nick began to build an athletic physique, but he didn’t want his fitness journey to end there.

He started weightlifting as way to improve on his physique, becoming highly interested in bench press competitions in high school. He wanted to be the best, staying motivated in order to fulfill his passion.

However, things would soon take a turn for the worse. A life changing event would occur in his life, completely altering the plans that he had laid out.

At the age of 16, Nick was in a major car accident, where he suffered from serious injuries. He was on the way to American football practice, but he never made it there.

An oncoming car came into his path, with Nick frantically attempting to get out of the way – but this backfired on him. His car rolled down an embankment, flipping over several times. He found himself ejected from his vehicle, sustaining serious injuries in the process.

Passersby quickly ran to his aid, but it wasn’t until he reached the hospital that the pain truly began to kick in. Nick was left with a broken back and a severely damaged spine, leaving him wheelchair-bound for the rest of his life.

When His Life Went Downhill

After his injury, Nick was told by doctors that he would never walk again. This hit him hard, leaving him with low self-esteem. His fitness dreams had all been crushed. He truly thought that his sporting days were over.

The thought of never being able to do something he loved quickly began to take its toll on Nick. He began to battle against depression, becoming overweight in the process. He was now a far cry from the way he used to be.

Eventually, Nick made a return to high school. He thought that with the support of those around him, this would help him to feel better about his situation. But all it did was make him feel worse. Seeing his peers do the things that he could no longer do made Nick feel worthless – he realized just how much his life had gone downhill.

However, this would then give him the motivation to change his life for the better, wishing to put in the past his darkest days – this is when he began taking steps to reignite his fitness journey. 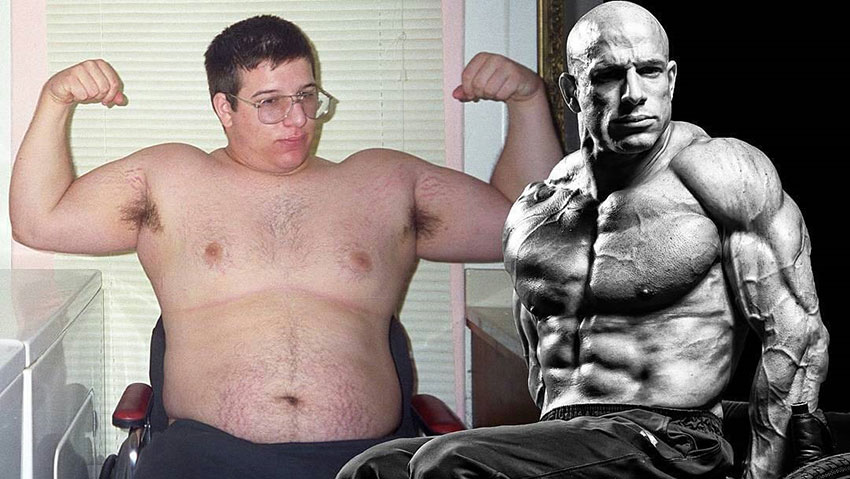 Nick before and after his transformation.

When He Found Fitness Once More

Nick now realized that he couldn’t keep living his life the way he was. He decided that despite him now being wheelchair-bound, he wouldn’t let this get in the way of him reaching his goals.

Nick could no longer perform certain exercises such as the squat any more, but he wanted to become the strongest in the ones that he could. He rediscovered his love for the bench press, beginning to put all of his focus into becoming stronger at this exercise, stating:

“I didn’t need motivation, because the thought of being stronger than everybody else kept me self motivated”.

Nick started to quickly shift the pounds, giving a complete overhaul to his training and nutrition plans. Eventually, Nick would make it his mission to increase awareness of wheelchair bodybuilding, while continuing improving upon his physique.

His motivation was now the highest it had been since before his injury, so he began taking full advantage of this. Having come so far in his fitness journey already, Nick knew he was capable of achieving more.

Nick started out in powerlifting, competing against non-wheelchair athletes. This was a true representation of his ambition to take his fitness journey to the next level. He quickly found success along the way, including in the Bench Press Championships Pinnacle, where he was the overall champion.

Eventually, Nick decided to take a different direction in his fitness journey, converting from powerlifting to the bodybuilding stage. His career in bodybuilding quickly began to take off, finishing first in competitions such as the NPC Wheelchair Nationals in Florida.

However, the highlight of his career came in 2011, when Nick achieved his ultimate aim of having disabled athletes compete on the same stage as non-disabled contestants at the Houston Pro. This emphasized just how far he had come in his fitness journey.

Nick was immensely proud of how much he had achieved so far in his quest to increase awareness of wheelchair sport. But he wanted to continue to inspire others to achieve the same things as him. Soon enough, Nick would be able to reach this goal.

Nick’s fitness journey has gone from strength to strength, quickly becoming a true inspiration to many people across the world. He was now a hero among the disabled community – being the person who brought wheelchair bodybuilding into the limelight.

Eventually, through sheer hard work and determination, he was able to reclaim some use of his legs, showing just how far he had come since the moment his life was completely changed.

His journey led him to achieve many great things, as he looks to inspire others to really come out of their shell to do the same. In the process, disregard any negativity to become the best that they can be. 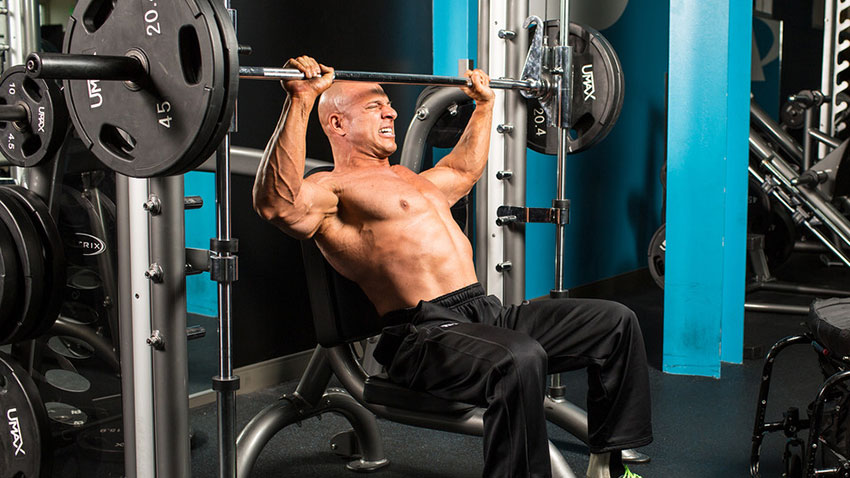 Nick trains regularly so he can keep on track with his progress in the gym. He regularly competes in wheelchair bodybuilding competitions – maintaining his physique is of paramount importance.

He trains around 5-6 times per week in order to achieve maximum results, continually progressing at a fast rate. Nick’s workout split, and the program that he follows is listed below: 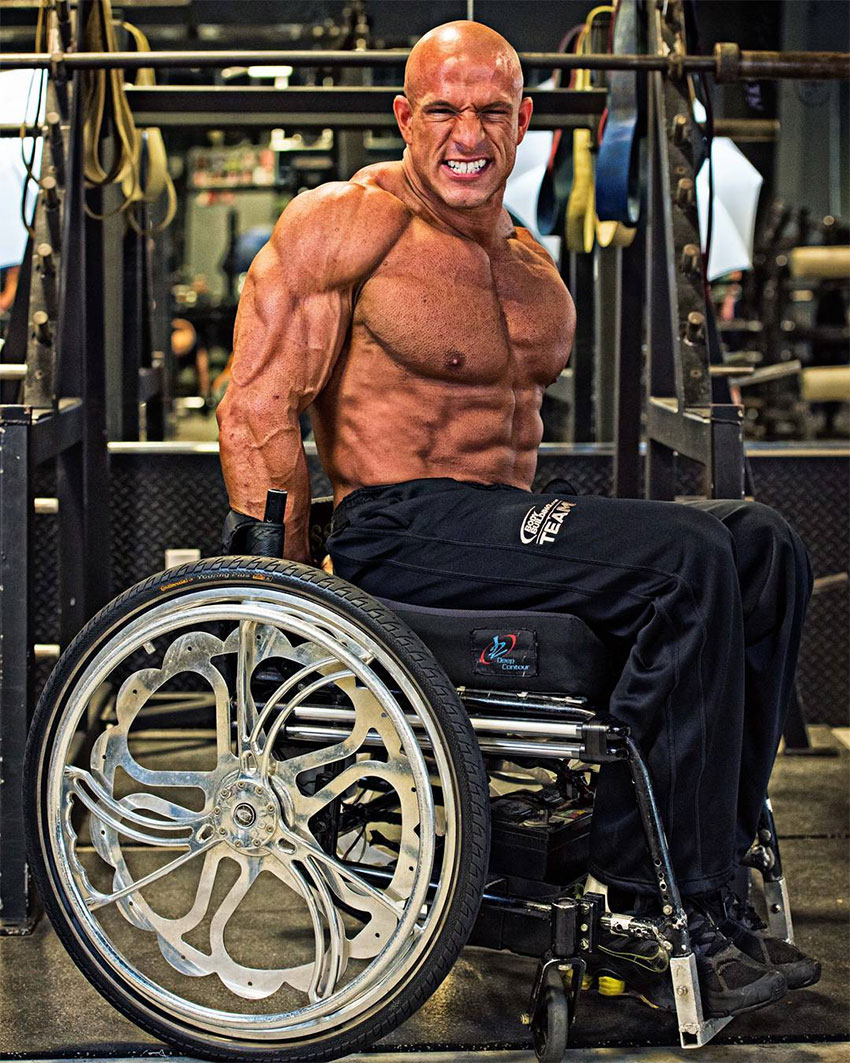 Nick ensures that he follows a suitable nutrition plan, enabling him to reap the benefits from his workouts. He is a firm believer in eating clean, placing emphasis on eating complex carbohydrates, healthy fats, and a high amount of protein.

In addition, Nick’s meals are prepared in advance so he isn’t tempted to eat too many unhealthy foods. He is a very busy individual, regularly travelling around the world. So, for him to stay on track, he ensures that his hectic schedule doesn’t negatively impact on his nutrition.

A meal plan that that Nick follows in preparation for a competition is listed below: 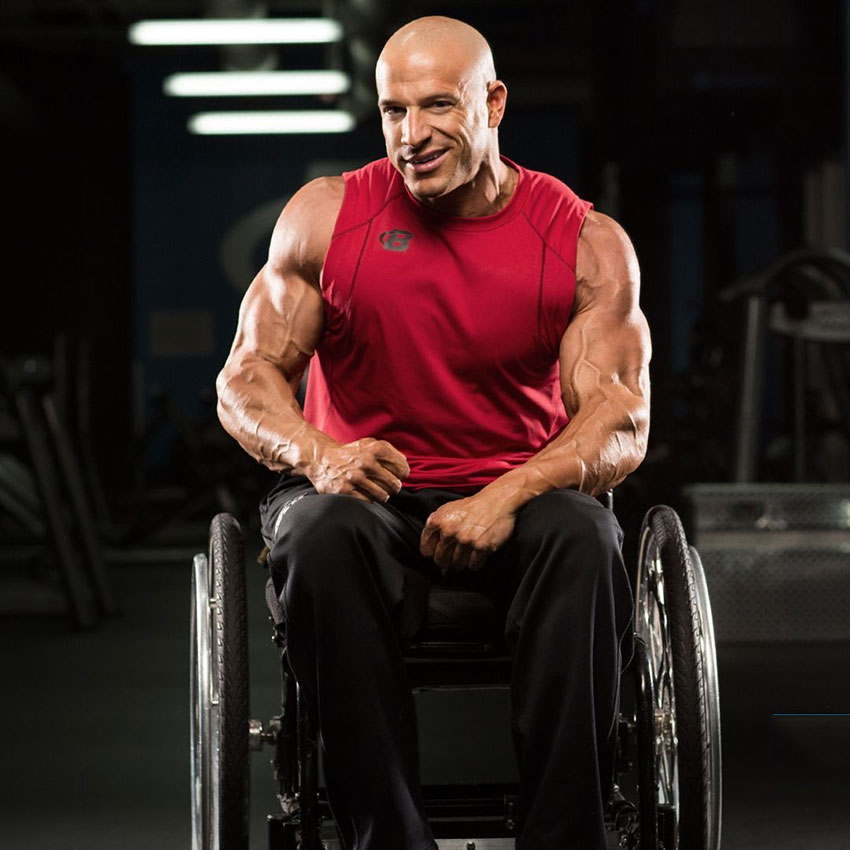 Nick Scott became a self-motivated individual when he realized that he didn’t want his fitness dream to come to an end. He sees other disabled athletes as an inspiration, being his wish to help them achieve the same things he has, stating:

“It’s the disabled athletes that inspire me the most, seeing their mindset and how they overcome situations. That is what I love so much about what I do”.

Furthermore, Nick lists Arnold Schwarzenegger as one of his biggest idols, being one of the people that made Nick want to achieve so much more in his fitness journey. Nick admired Arnold as he was able to make a success out of not only his bodybuilding career, but also in other areas of his life – something that Nick was able to achieve himself.

Eventually, it dawned upon Nick that he wanted to make a difference in his life. He showed a truly defiant attitude in overcoming his life-changing injury, never giving up until his goals were reached. In regard to this mindset, Nick had this to say:

“If you want something in life, don’t think about it, just go for it. It doesn’t matter if you mess up, the important thing is that you learn from your mistakes. The only time you fail is when you don’t try”. 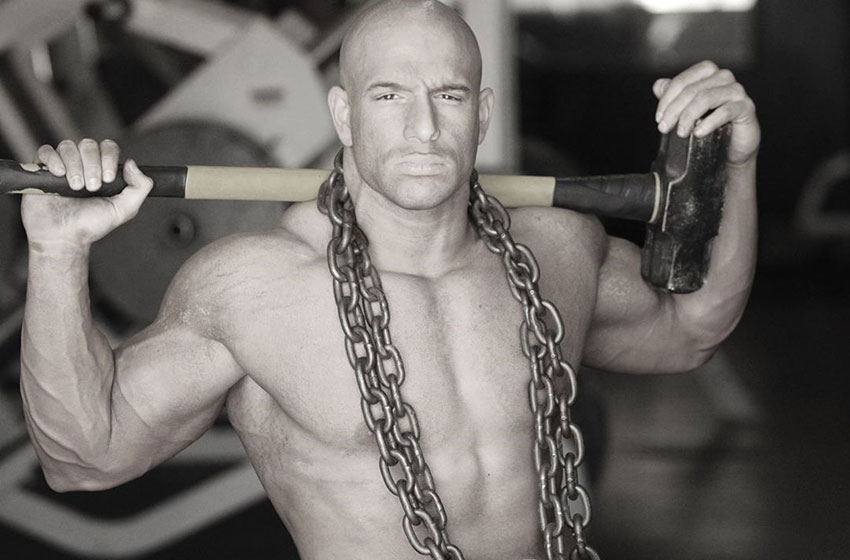 “It truly is an honor to be looked upon so highly by so many people. I love helping others be the best they can be”.

What we can learn from Nick Scott

Nick Scott is an inspiration to many because of his ability to overcome a life-changing event. Even after sustaining serious injuries, Nick still proved he was capable of continuing his fitness journey. He never gave up on his dream – that’s what makes him a truly inspiring character.

He started off by accomplishing his own goals, while building upon his physique to start competing on the bodybuilding stage. But then, he wanted take this a step further – having a positive influence in other people’s lives, while increasing awareness of wheelchair bodybuilding – something he was eventually able to achieve.

What we can learn from Nick Scott is that things happen in life that can leave you feeling worthless, lacking in motivation and not able to chase your dreams. But with the right mindset, it is possible to overcome any obstacles in life, while achieving many great things – just like Nick.