Mike Rashid is a power bodybuilder, author, entrepreneur, former boxer, and online fitness guru from the United States. Alongside being the owner of a popular gym in Miami, Mike also runs his own supplement and clothing line, which has seen a lot of success since he started it.

Growing up, Mike became involved in working out from an early age, thanks to his father. “My father had my brothers and I chopping wood, swimming, sprinting in sand, hiking, doing pull-ups, etc. I had my 1st boxing match at age 12,” says Mike.

Mike’s interest in boxing grew bigger and bigger as he came into his teens – to the point that he became a professional boxer, winning the National Golden Gloves award on two occasions.

As Mike got into his late 20s, he gradually transitioned to fitness and power-bodybuilding; becoming a WBFF Pro, later, starting his fitness video channel. In his videos, Mike would share his knowledge on fitness, spirituality, and entrepreneurship. Alongside featuring other fitness gurus and stars like CT Fletcher, Dana Linn Bailey, and Kai Greene. 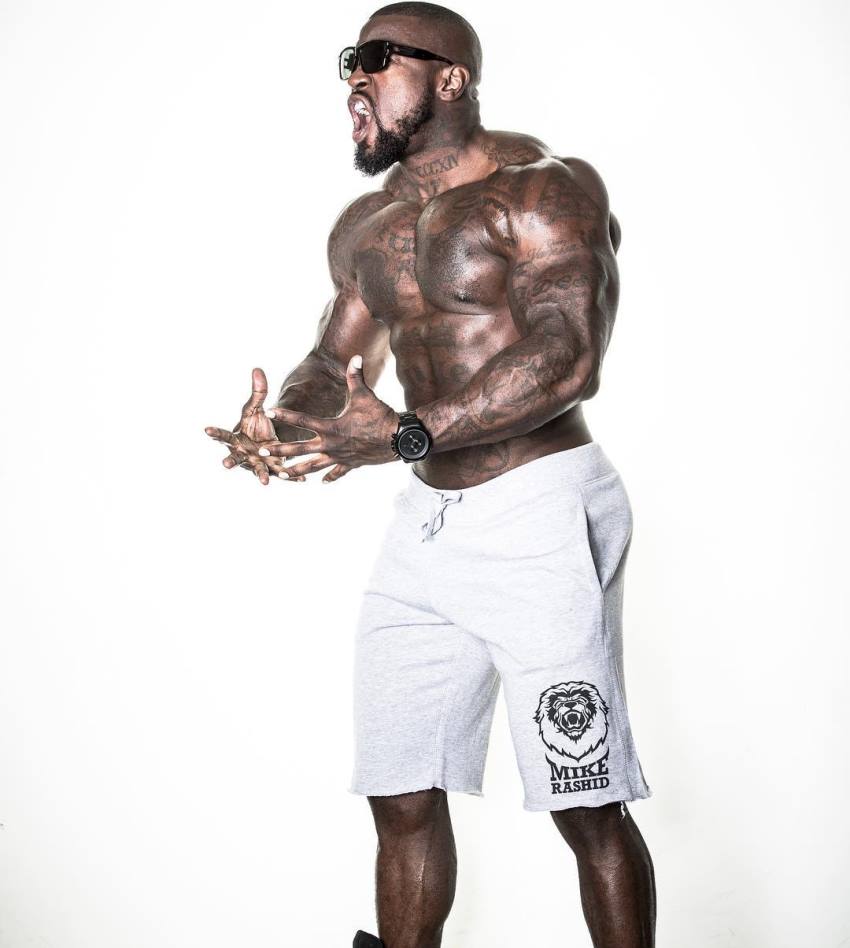 “I never had any intention on competing, someone recommended I do a show, 2 weeks prior to it. I accepted the challenge and it went well, I liked it so I kept on doing it.” 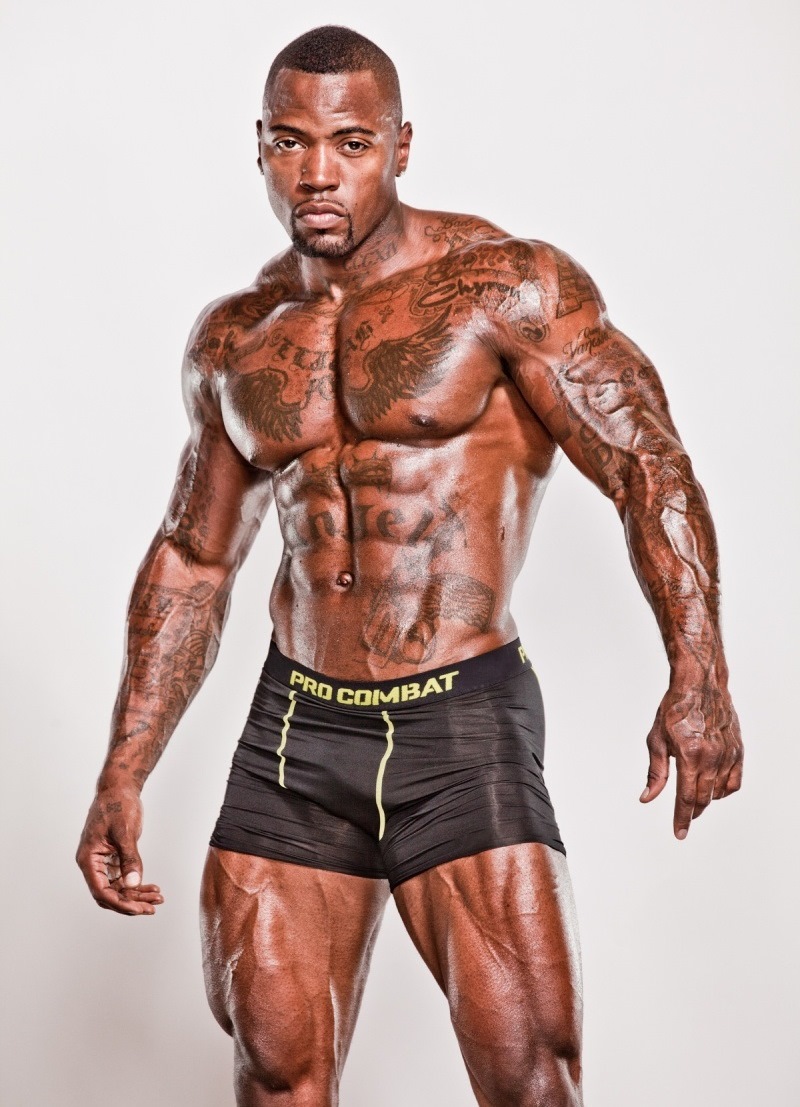 “Since I’ve started practicing mindfulness my life has been different. Hate to sound dramatic but it’s true. If I miss days, I really feel it. I feel I’m vibrating on higher frequencies. I recommend it. Stress becomes less stressful. People seem to move in slow motion. I feel a lot more aware. Life just overall feels more pleasant. Try it. Or don’t.” 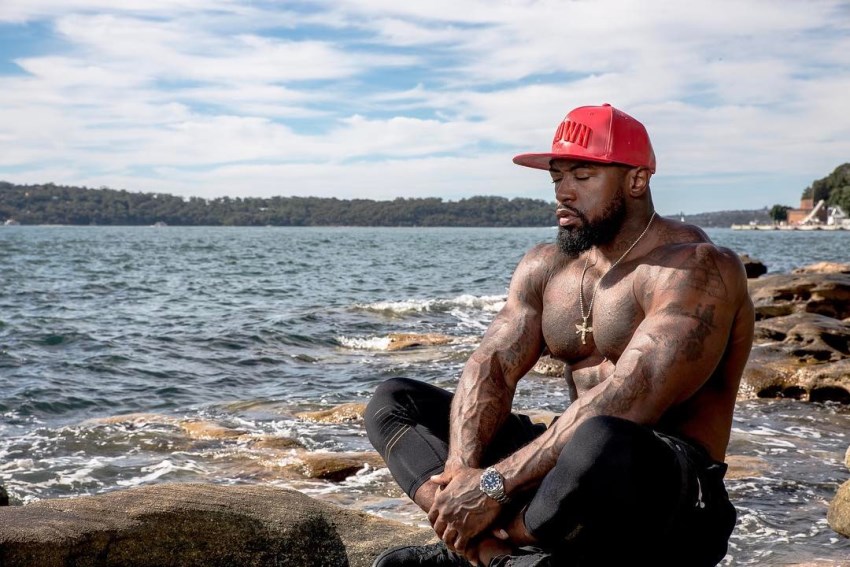 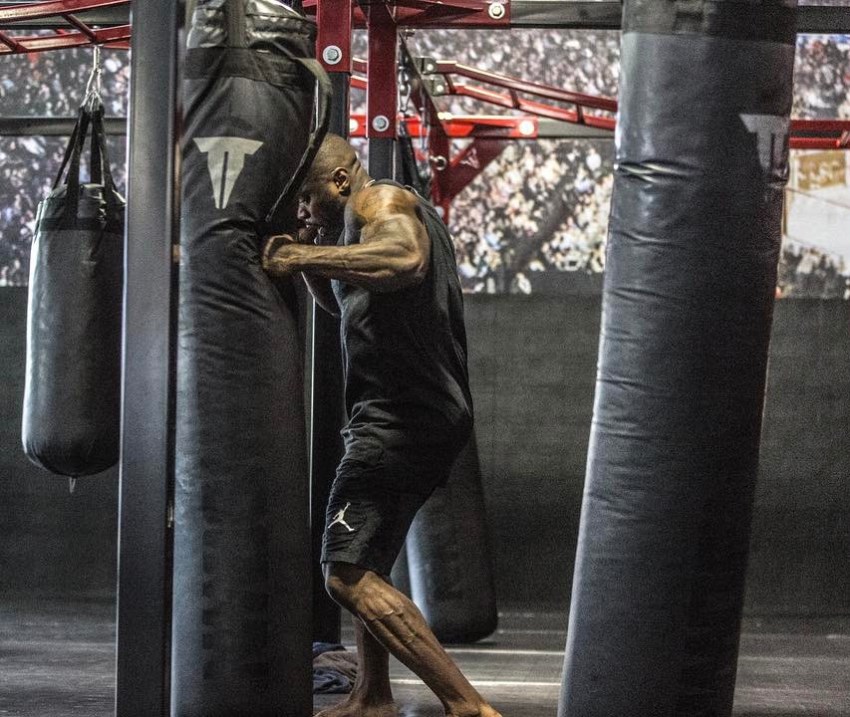 As a former boxer, Mike’s goal in fitness is to stay strong, durable, and functional over a long period of time.

Mike says, it can be difficult to maintain both strength and endurance at the same time. However, he likes challenges, so he does his best to keep both aspects of his fitness at their highest.

These are the basis of his training program. Other exercises, such as isolations, have their place in Mike’s workouts, but they aren’t utilized as much.

“I feel squats are the foundation for any athlete, in any sport. I like to incorporate powerlifting principles in progressing to a max effort for a neural response which translates to strength. However I like to progress with bodybuilding styled rep ranges which expands cells translating to larger muscles. After which I activate that inner athlete to do any type of crazy burn out or drop set which translate to badassery.”

This not only helps Mike with his endurance and flexibility, but it also serves him as cardio; being good for fat loss and cardiovascular health. 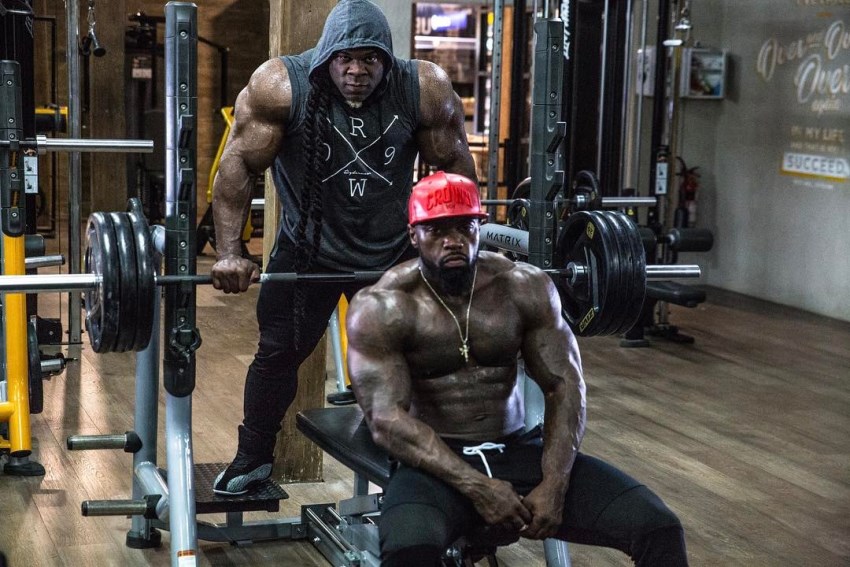 Mike Rashid preparing to do a heavy bench press, having Kai Greene behind spotting him.

While Mike often mixes his workouts up, he keeps some things the same. Such as starting out with a heavy compound movement which, in this case, can be either standing barbell press, or standing dumbbell press. His shoulders are worked the most during this exercise.

Later in the workout, when he performs other shoulder exercises, Mike focuses on high reps and light weights – maximally exhausting the muscle, and achieving the best pump possible.

Here’s how it looks;

Mike regularly visits saunas to detoxify his body. He also meditates often, believing that mindfulness is the key to lowering stress.

Linking this to fitness and bodybuilding, Mike mentioned less stress means less cortisol, a hormone which can be catabolic. The less cortisol there is in his body, the more muscle mass he’ll retain. 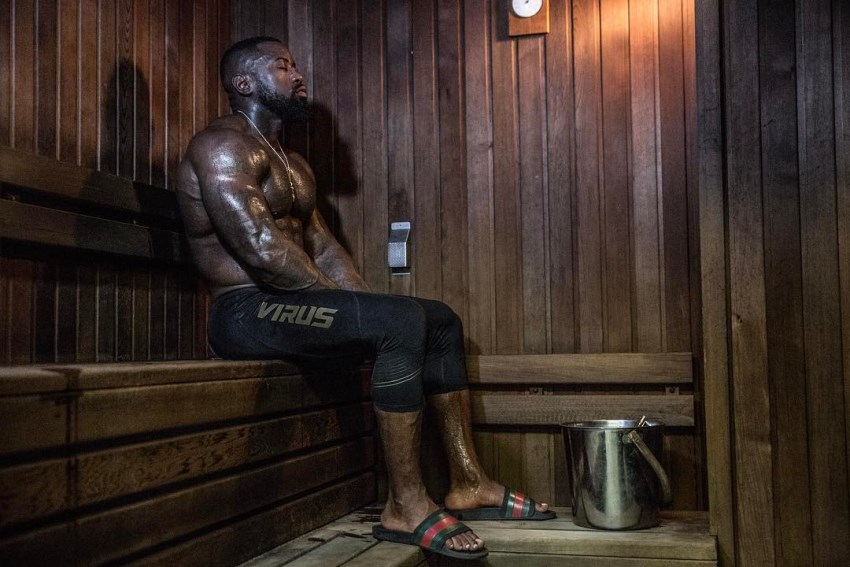 Mike’s diet has changed radically over the years. When he competed, he ate like any other competitive bodybuilder – consuming lean and nutritious foods, along with drinking a lot of water, and taking necessary supplements.

One Meal A day Approach:

However, Mike has, at times, completely changed his approach, to what may seem as ‘insane’ to many.

Mike has experimented with eating once a day, with minimal intake of animal protein. This way, he gets all of his daily calories in one meal, which consists of a lot of healthy fats and plant-based protein.

Mike says, he dropped his weight from 240 to 225 pounds this way, and didn’t lose any strength or muscle in the process – only fat.

Apart from his ‘radical‘ approaches to dieting, Mike is very much a balanced individual, both in life, and when it comes to dieting.

He often sees his eating regime as a practical task, rather than something he has to monitor closely everyday.

He does this by reducing processed foods, and making healthy, ‘whole-food‘ choices as much as possible. This way, Mike stays on track all-year-round.

This is Mike talking about his diet; “I want to drop even more weight. My strength is still the same, been losing fat, not muscle. The less you eat, the more clearly you think. Our ancestors ate a couple times a week if lucky. Food is the number one killer in the United States. Heart disease from overeating the wrong things. ‘Let thy food be thy medicine’.” – Mike Rashid 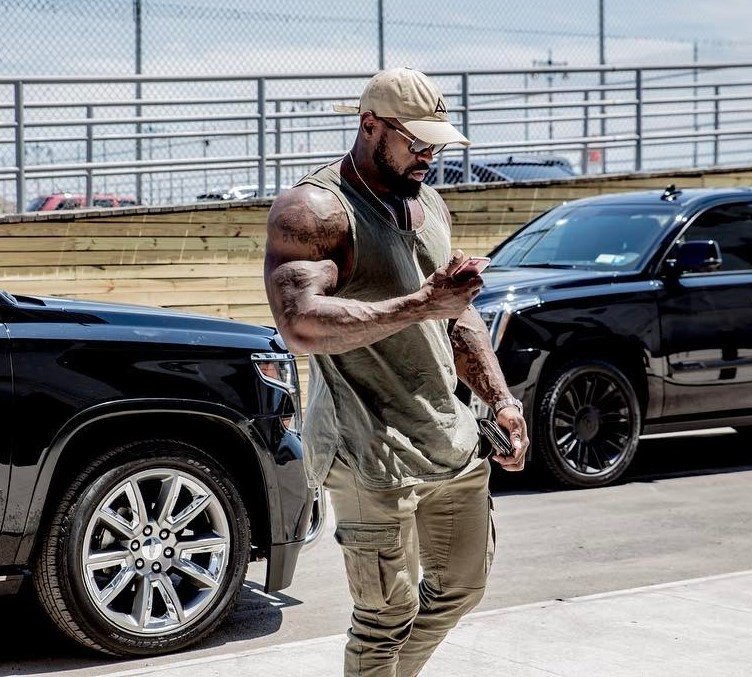 When asked who is his main inspiration in life, Mike simply said; “My father. A complete Alpha Male. A mans man. Honest, hard working, strong and gentle.”

Besides being a strong and exemplary figure in Mike’s life, his father also helped him build a solid foundation for his journey in fitness, and entrepreneurship. 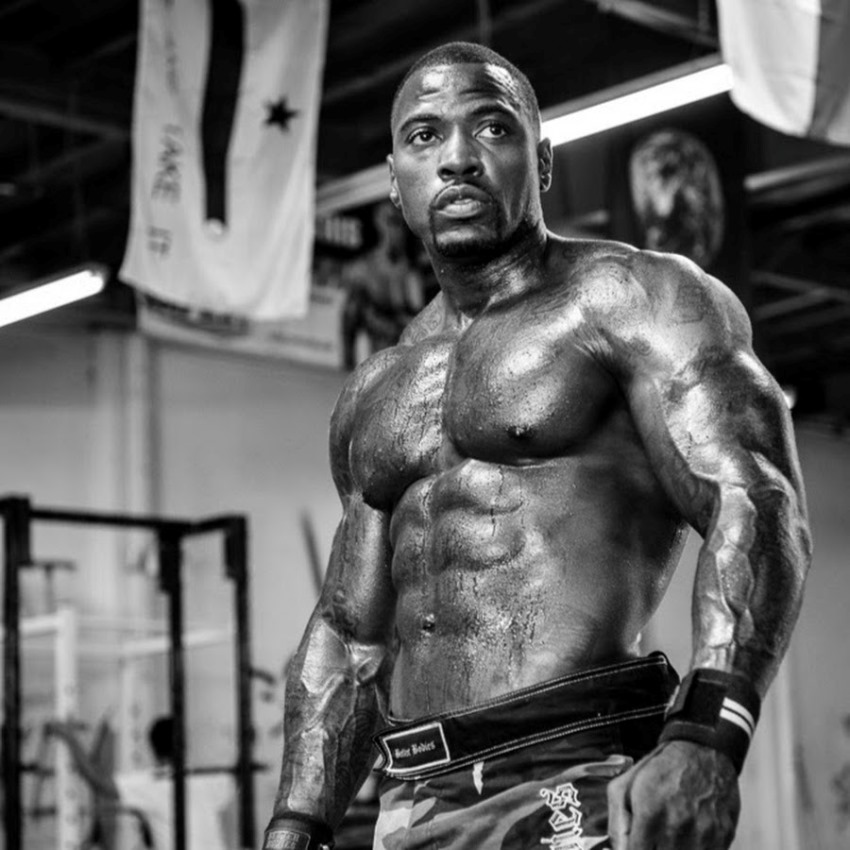 “Honestly, what’s it worth if your abs only last a couple days? From what I’ve observed during my brief time in this “fitness industry” many of these “fitness” folks aren’t fit. For some, having abs is a result of being malnourished.

If you are a part of this industry, try to actually be fit and healthy. If you being healthy doesn’t allow you to be the most shredded person on the planet, then so be it. I feel this obsession with being “shredded” is mentally unhealthy. Some have to do so much for this temporary look, they gain weight after and get depressed.”

What we can learn from Mike Rashid

Mike Rashid is someone who would always take the harder, less crowded route, if he had to choose.

He believes that by choosing discomfort over comfort, he builds his character and strength in life, which ultimately, makes him a happier person.

Choosing the more difficult path is something you too should be willing to do, because it will not only make you stronger, but it’ll also make you appreciate your successes that much more.

As someone once said; “Difficult roads often lead to beautiful destinations.”

Your more like a Delta. Your so tiny. You didn’t even break the 6 foot barrier. Now Hafthór Júlíus Björnsson is an Alpha. An Alpha takes control, dominates! You stand next to Thor and who is the Alpha? Who are the people going to look up to?

Bodybuilding is for the ladies that like to look at themselves in the mirror all the time and rub oil all over their bodies. Real men powerlift. Move mountains, carry trees, pull semitrucks.

I suggest you think about what an Alpha is, before you start throwing out these wild claims.

The world is relatively safe behind a computer.

The goof who claims to know what an alpha is should go put his fat ass in a cage with a honey badger. Aside from that, Mike called his dad an alpha, not himself.

Only takes a small lady finger Beretta to drop the biggest Ape! However I think it’s good to be healthy and strong. But to live your life with and for Jesus Christ is the ultimate destination.
The body will grow old like a garment and the strongest warrior will be as weak as a baby one day.
But he who puts his trust in God abides forever!

Alpha is a mindset, not a title.
Becoming Alpha is measured only by the choices you make and the paths you take to their realization, not by the buzzing of carrion flies who anticipate your demise.

Since when do Alphas need to tell everyone they are alpha? Truth is most guys who think they are Alphas don’t come close to being one. Go jack off to an Rds video ya dipshit.

I was also born on 14th March,2002. I think I will be great fighter like you. My height is now in 2019 is 6ft(183cm). I followed you in Instagram so today I want to see your age and full biography. You are really good person. I am from Pakistan.

I think Mike is a little older than 36. I just watched his documentary where he said he was 41 haha .. Please fact check.
https://www.youtube.com/watch?v=YN-Bix58GNM.

Only supplements he takes are BCAA, plant protein… My ass… ? ?