Establishing himself as a formidable athlete on the running track in his teenage years, he built an impressive physique by the time he graduated from college. However, when he reached his mid twenties, his life began to take a turn for the worse. He developed an addiction to alcohol, which negatively impacted his health for several years.

But then one day, Michael came to the realization that he needed to change. From then on, he set his sights on reaching the bodybuilding stage. He began competing at the age of 33, when he entered the Natural Northern USA Bodybuilding and Figure Championship in 2011, finishing in 5th place. From that moment, he was instantly hooked.

Because of his high ranking in his first competition, Michael realized his potential on the bodybuilding stage. As a result, Michael continually set himself new goals to become the best that he could be – reaching his peak when he earned his IFBB Pro Card in 2012. 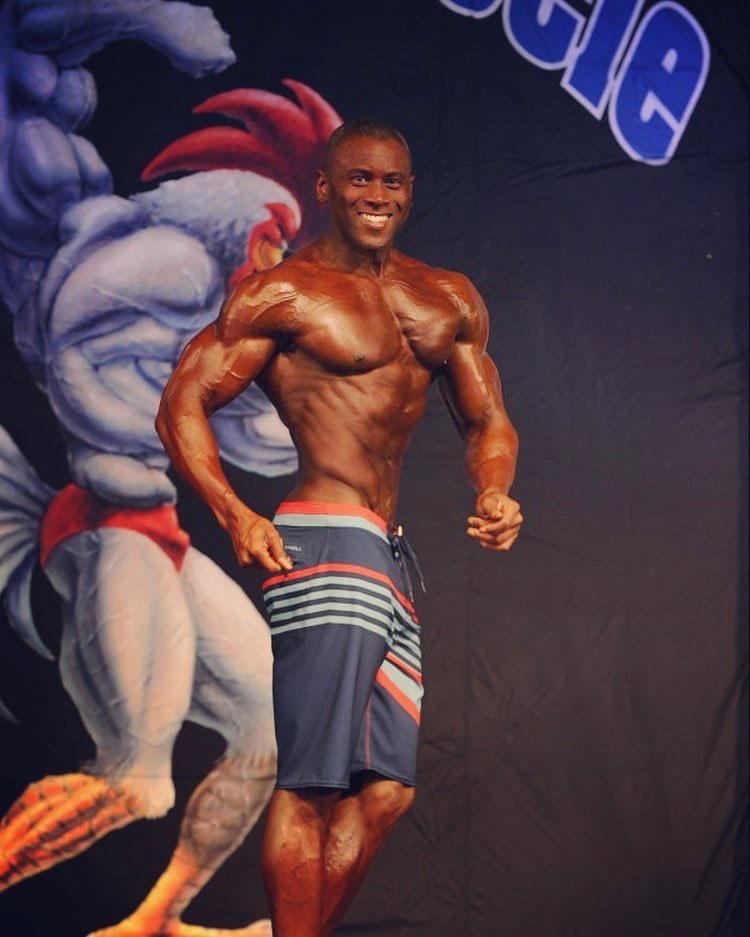 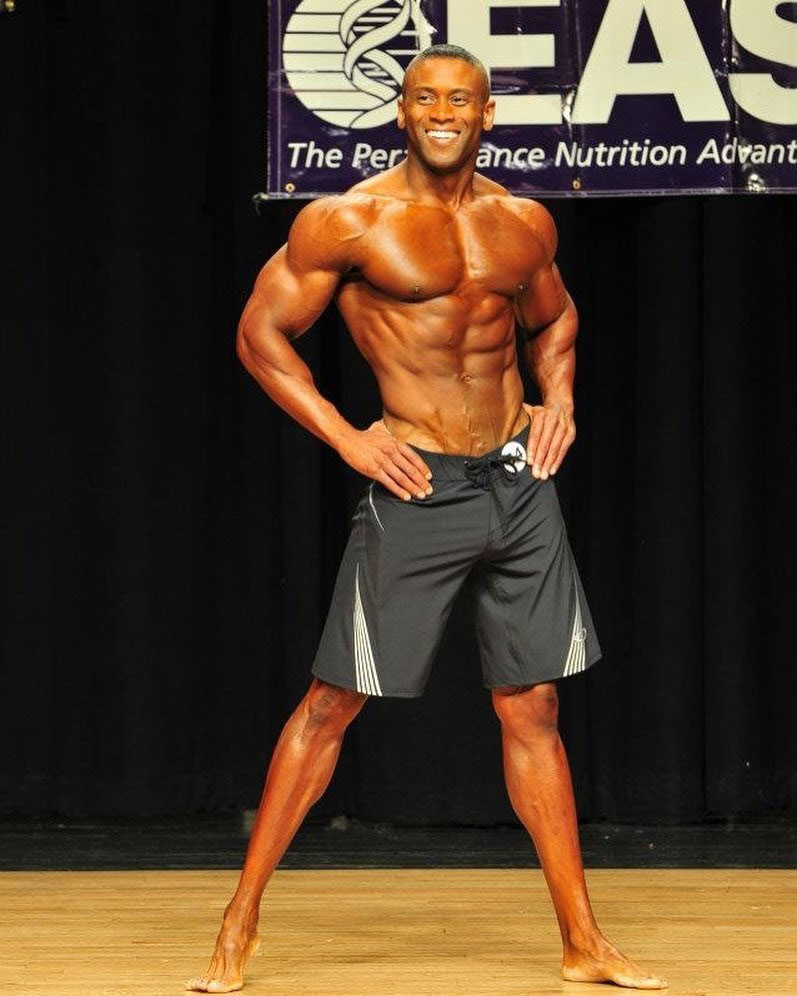 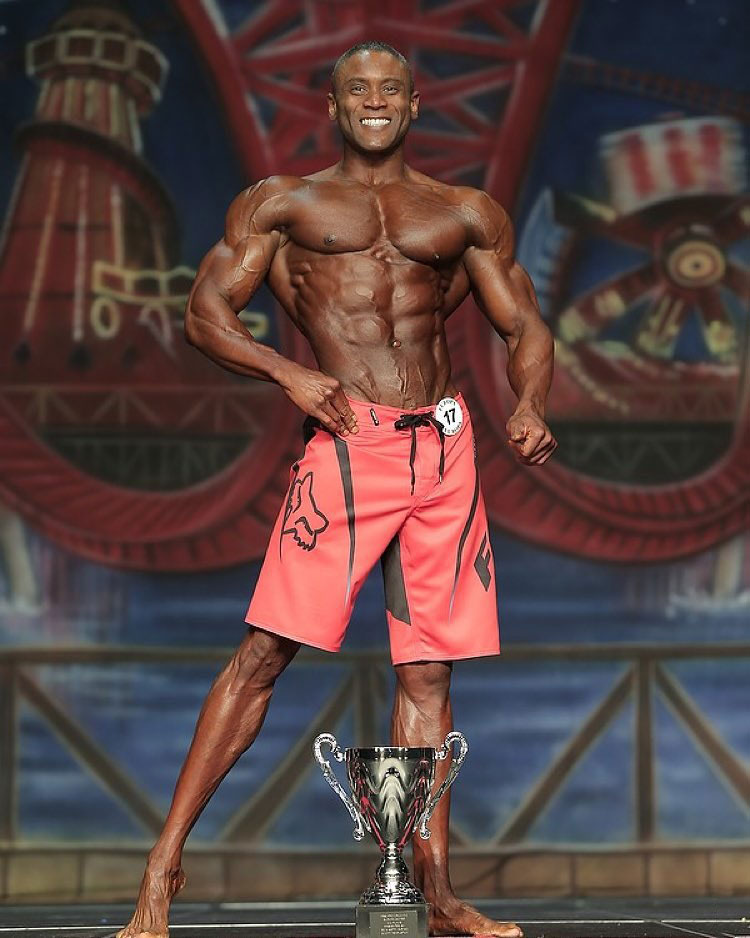 Michael Anderson grew a love for sports from an early age. Born in South Jersey, USA, he took inspiration from his older brother to start running track throughout his high school years – relocating to Ohio in the process.

During this period, Michael trained intensely in order to develop himself as an athlete, improving his performance on the running track in the process. As a result of this, Michael realized the importance of continual self-progression in a competitive environment.

Throughout his college career, Michael was guided by some of the highest level trainers in the fitness industry – enabling him to quickly form the foundation to build a great physique.

However, Michael lacked a strong knowledge of fitness as a whole – more specifically, nutrition and training to build lean muscle mass. As a result, his physique never reached its full potential until later in his life. Here’s Michael talking about his fitness training throughout his college years:

“I thought that ‘lifting was lifting’. Despite having had some of the best trainers in the industry when I was college, I never paid attention to why they had me doing the things I was doing. So, left to my own devices, I just tried to replicate what I had always done before, not knowing that specific training yielded specific results”.

Despite a blistering start to his career as an athlete, Michael’s life commenced on a downward spiral throughout his twenties. During this period, Michael developed an addiction to alcohol – negatively impacting his life for several years. As a result, his personal health began to tumble downhill.

But then one day, that all began to change. Michael realized that he needed to battle against his demons, or risk sending his life down the wrong path for good. It was at this point, he checked himself into rehab, aiming to wave goodbye to his darkest days.

Michael knew that he faced an uphill struggle to overcome his alcohol addiction. In spite of this, he was determined to make a better life for himself. By maintaining a committed mindset, on the 23rd January 2006, Michael emerged victorious in his quest to live his life in a positive way – remaining sober ever since.

Michael cites this as the biggest reason for achieving success later in his life, stating:

“As a recovering alcoholic, I feel absolutely blessed to say that I’ve been sober since January 23, 2006. It is because of this that I am able to even have a chance to do what I do today”.

After overcoming his alcohol addiction, Michael searched for a new challenge in his life. It was at this point, he began paying more attention to his diet and training routine in the gym.

After rediscovering his love for intense training, Michael quickly made progress by consistently training in the gym. As a result, he started to build the sculpted and muscular physique he’s now famous for.

But one day, Michael decided he wanted to take things to the next level. It was at this point, he aimed continually build his physique, with full intentions to reach the bodybuilding stage.

However, classic bodybuilding wasn’t something that Michael was interested in. It wasn’t until the men’s physique category came along, that Michael set his sights on becoming a competitive bodybuilder. 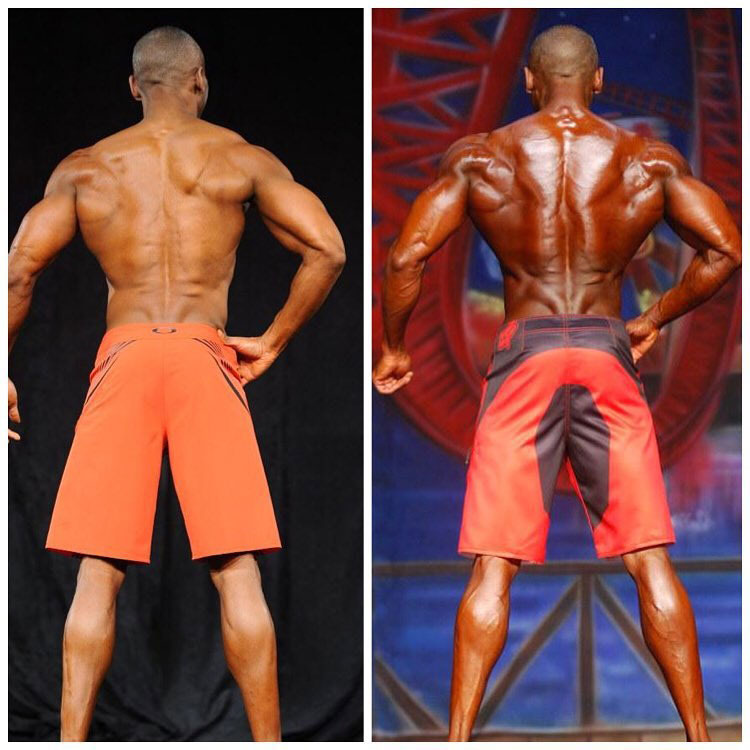 Michael Anderson’s progression in his back muscles, from his earlier competitive career to later on.

Michael started competing at the age of 33, appearing on stage at the 2011 Natural Northern USA Bodybuilding and Figure Championship. He finished in 5th place in the competition, immensely proud to perform so well in his first competitive appearance.

Later in 2011, Michael won his first ever competition – the Cincinnati NPC Monster Mash. Finishing as overall champion, Michael was aware of his potential on the bodybuilding stage. From then on, he was determined to build his physique further.

Fast forward to 2012, Michael earned his IFBB Pro Card in the NPC Masters Nationals. Because of this, he was eager to make a name for himself on the professional IFBB stage.

Ever since he earned his Pro Card, Michael has made his mark in his competitive career. As a result of his hard work, he’s finished in the top 10 in several competitions – such as the 2013 Europa Show of Champions, and the 2014 IFBB Mile High Pro, finishing 1st place in both competitions.

After overcoming negativity in his life, Michael has gone on to achieve great things in his fitness career – such as winning his Pro Card and becoming a sponsored athlete.

Because of his success as a Men’s Physique Pro competitor, Michael has dedicated his life to helping others reach their fitness goals – all made possible by his personal training career. 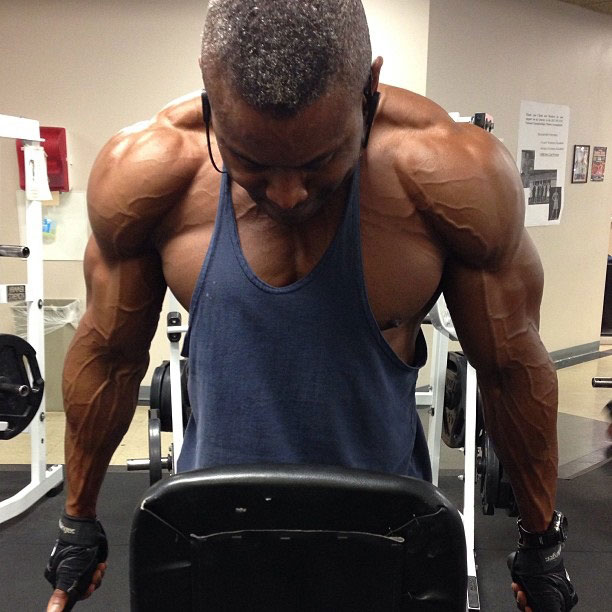 Michael’s passion for intensive training dates back to his days in high school. Despite falling off track in his twenties, Michael picked up where he left off to build a great physique.

He trains consistently 5-6 days per week, dedicating each training day to a specific muscle group. As a result of this, Michael is able to continually build lean muscle mass.

“I am a die hard split trainer. Each muscle group gets its own day. Legs, Chest, Back, Shoulders, Biceps, Triceps. 24-30 set volume, 3 sets of 8-10 exercises. In season or out, that never changes. It’s gotten me this far, I see no reason to change it”. 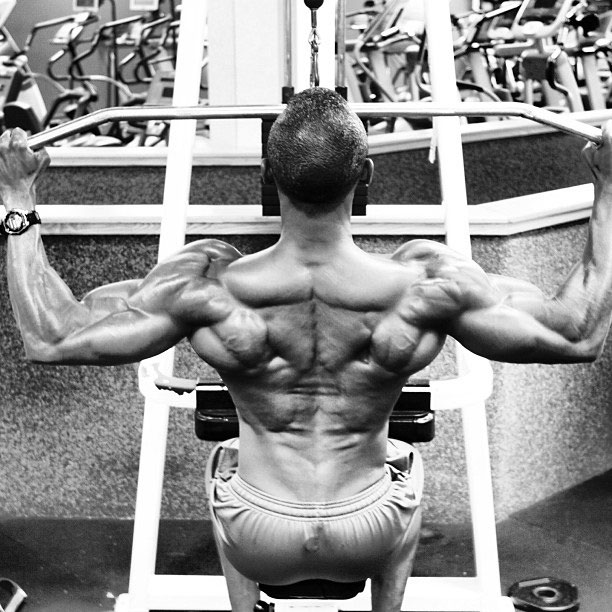 Michael keeps his nutritional preferences simple, choosing to stay away from dieting phases such as ‘bulking’ and ‘cutting’. As a result, he’s able to keep his body as lean as possible all year round.

However, Michael becomes less strict with his diet in the bodybuilding off-season – upping his calories slightly to stay lean while building muscle mass. 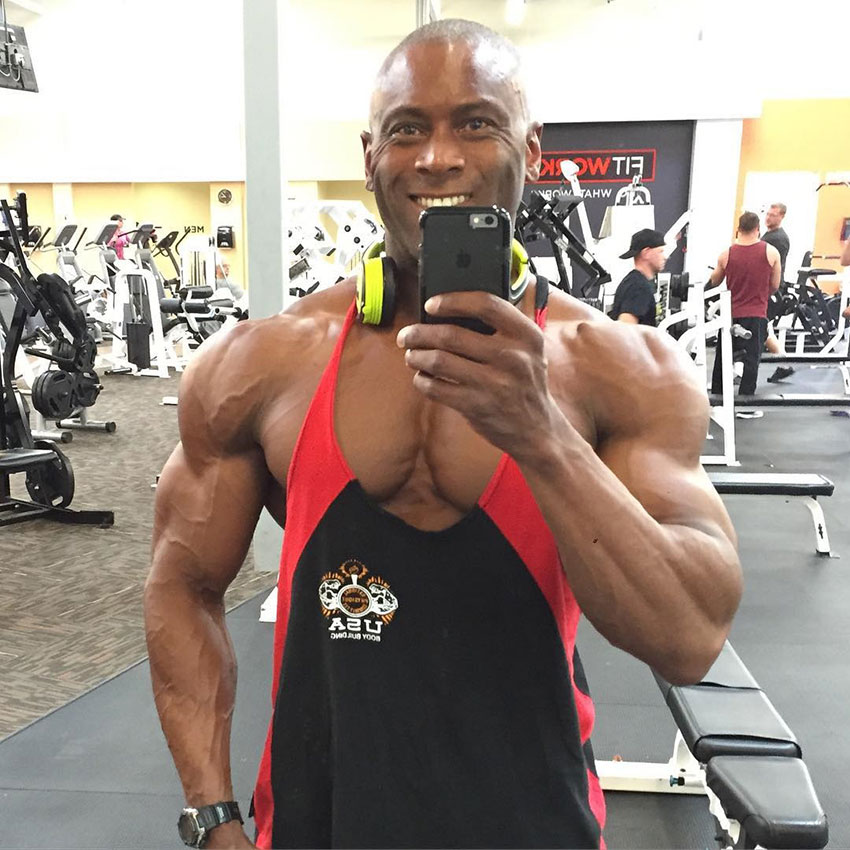 Throughout Michael’s competitive bodybuilding career, his fellow Men’s Physique competitors are the biggest influences that pushed him forward. Anton Antipov and Sadik Hadzovic are two bodybuilders who Michael respects the most – encouraging Michael to always bring his best to the bodybuilding stage. In the words of Michael:

“If you want to be the best, you have to surround yourself with the best”.

However, Michael came to the realization that consistency is the key to success. Ever since he learned to follow a consistent and progressive training plan, he quickly began to make progress in his mission to build a great physique. On the subject of consistency and its relation to achieving fitness goals, Michael stated:

“Consistency is directly correlated to the importance of my goals. Once I establish a goal for myself, I map out a plan to reach that target. So when training gets tough, I simply remind myself of what my ultimate goals are and what needs to be done to reach them”. 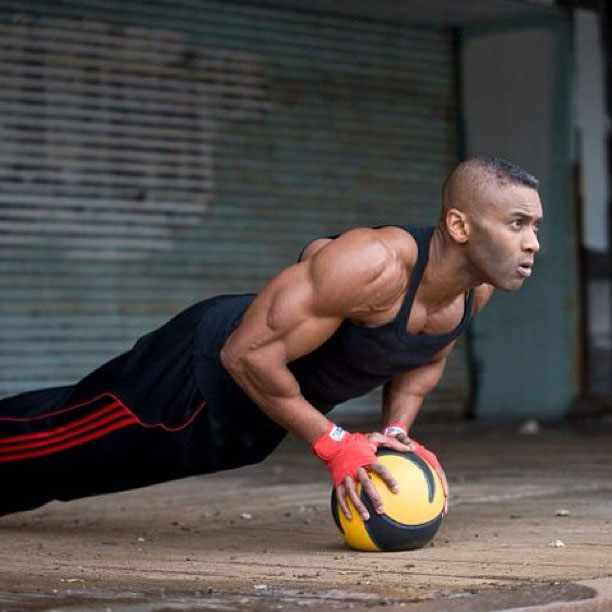 What we can learn from Michael Anderson

Michael Anderson became a success as a Men’s Physique Pro bodybuilder, but he had to battle against alcoholism in order to get there.

Through his sheer hard work and determination to overcome negative aspects of his life, he not only became a success in his fitness career, but he also began to inspire many people across the world – particularly his clients.

Ever since Michael overcame his addiction to alcohol, he’s managed to stay sober, earning success on the bodybuilding stage along the way. In the process, he proved to himself and others that anything is possible if you stay committed to reaching your life’s goals.

Great athlete. I’m type 2 diabetic also. Wish I could learn more about his diet and workout routine. Is he a personal trainer? If so where and sign me up.