Micah Lacerte is a WBFF Athlete, fitness model, and gym owner from Kansas, USA. Throughout his extensive career, Micah has accomplished many things in, and outside of fitness. He was crowned the 2011 WBFF Muscle Model World Champion, he was on the cover of dozens of magazines, and he’s starred in reality TV shows.

However, Micah didn’t always have an easy life. In 2005, when he was at the peak, Micah suffered a serious car accident. He received multiple injuries to his neck and back from the accident, which forced him to avoid any physical activity for the next six months.

Throughout the recovery process, Micah became depressed and agonized. He not only lost his muscle and strength, but also his passion for fitness – becoming a shadow of his former self.

However, Micah eventually realized that he couldn’t continue living a miserable life. Instead, he decided to push through the adversity to start his fitness journey all over again. Fighting through the obstacles day after day, Micah has since turned his life around to regain his ripped physique, along with becoming a renowned WBFF muscle model. 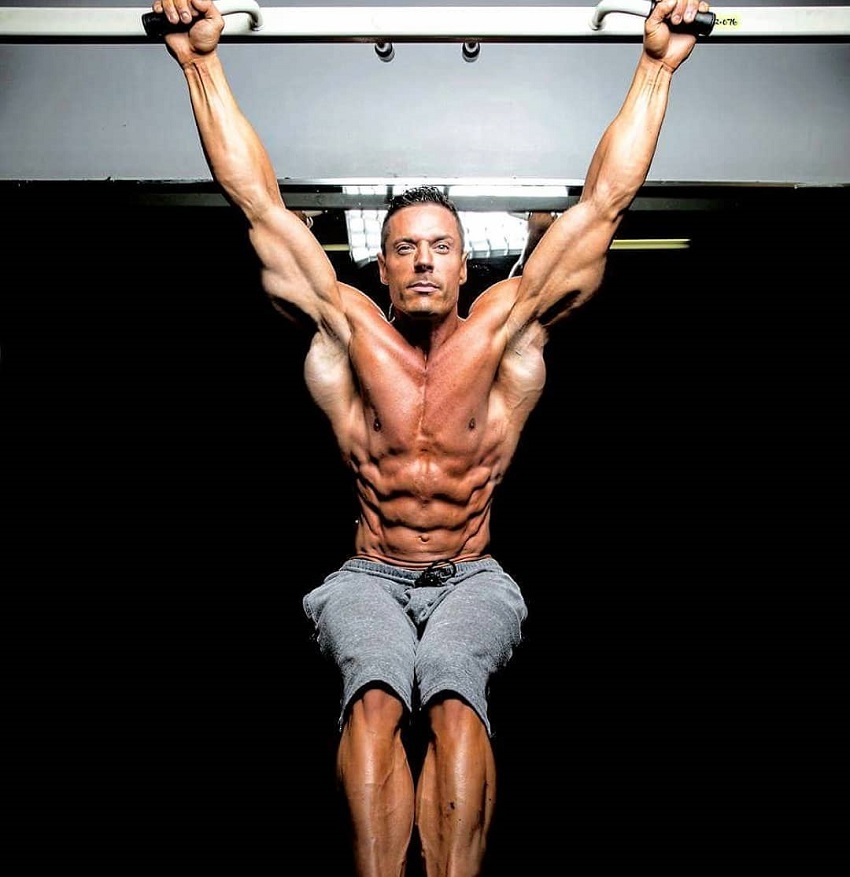 “Much of our life is based on the choices we make. If you do not like where you are or in need of change then it starts with making better choices and surrounding yourself with people who help your progress not regress.” 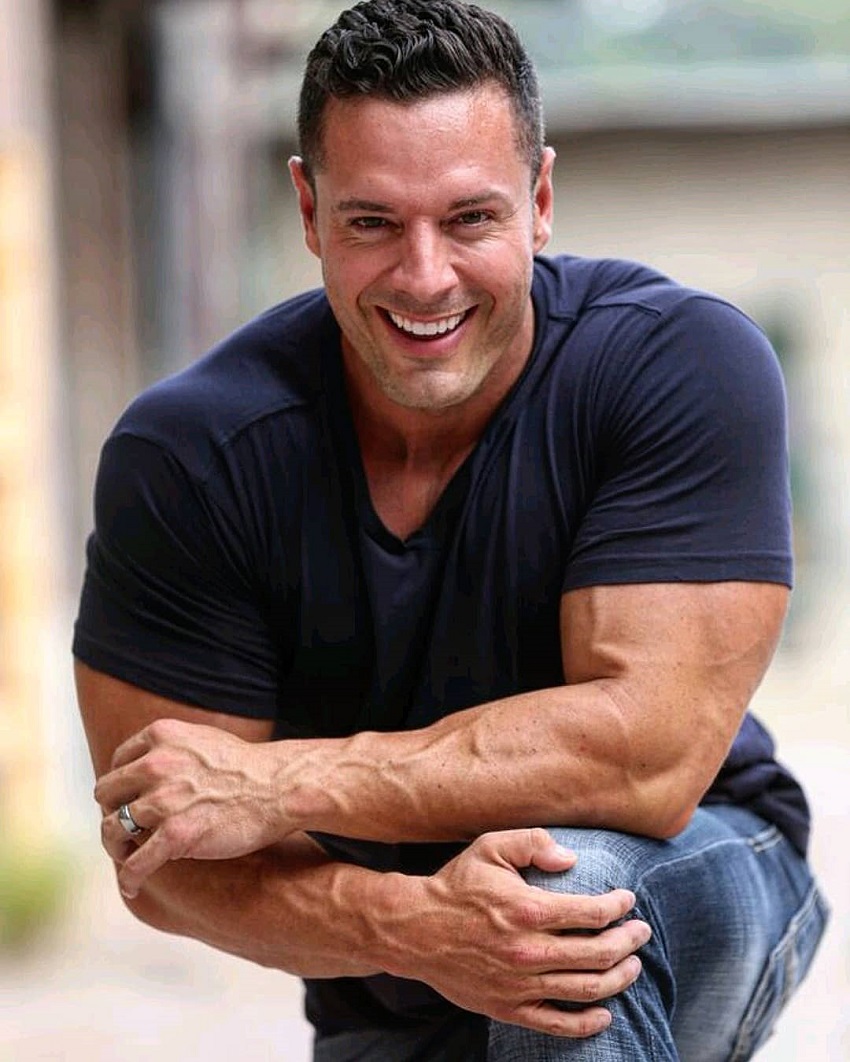 “Mondays are my favorite. It’s a new week, new goals and opportunities. It’s up to you to make the absolute most of it.” 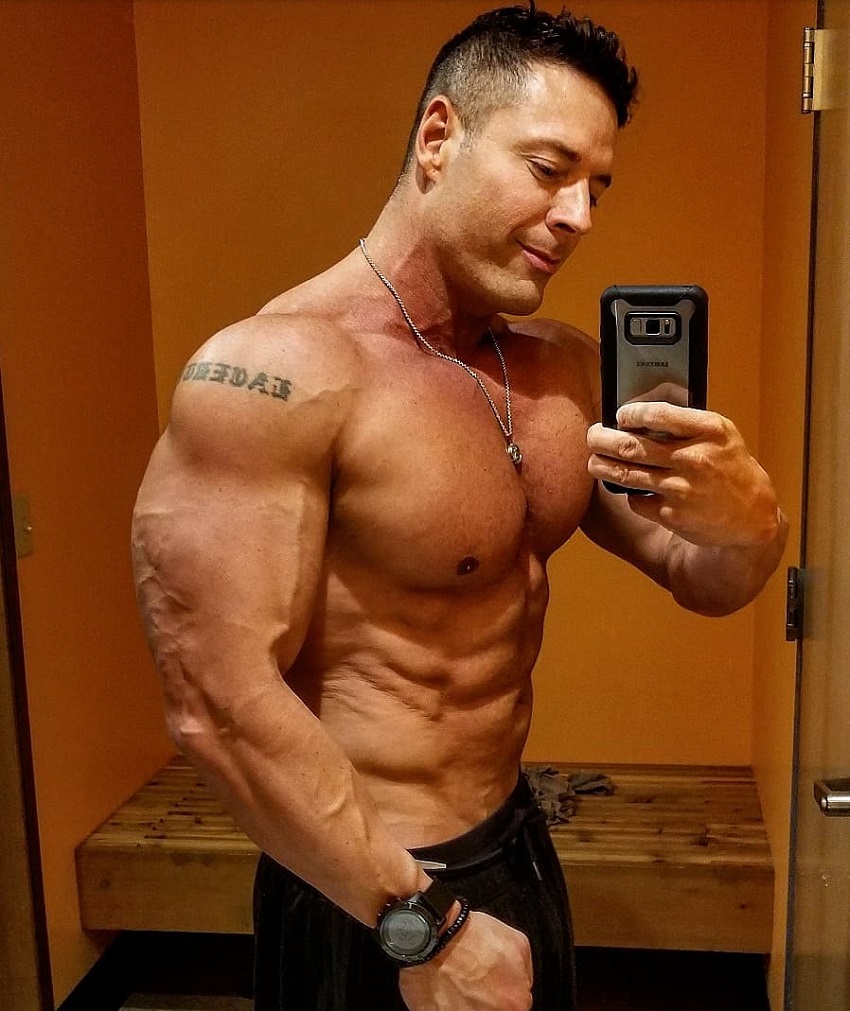 The “Skinny Kid From Kansas”

Micah Lacerte grew up as “a skinny kid, ectomorph to the fullest but was always very into sports,” he recalls. Hoping that by playing sports he would become bigger and stronger, Micah began participating in soccer, baseball, and track, among many other sports.

However, coming into his late teens, Micah’s weight issues persisted. Despite being extremely active and playing almost every sport ‘under the sun,’ Micah was still underweight. Eventually, at the age of 18, he realized sports weren’t the answer to his problems. As a result, he began searching for other ways of getting bigger and stronger.

Coincidentally, it was around this time Micah saw a fitness magazine for the first time. Impressed by the muscular physiques he saw while listing the magazine, Micah set a whole new goal in his mind – he decided to become a fitness model himself.

However, Micah knew this was a no easy task, and that a long journey awaited him. He said; “Standing there that day at 6’00”, 150lbs, I knew I had a ton of work in front but was not going to let anything hold me back. I remember caring the magazine around with me everywhere I went, studying more of what was in it then I was in class.” 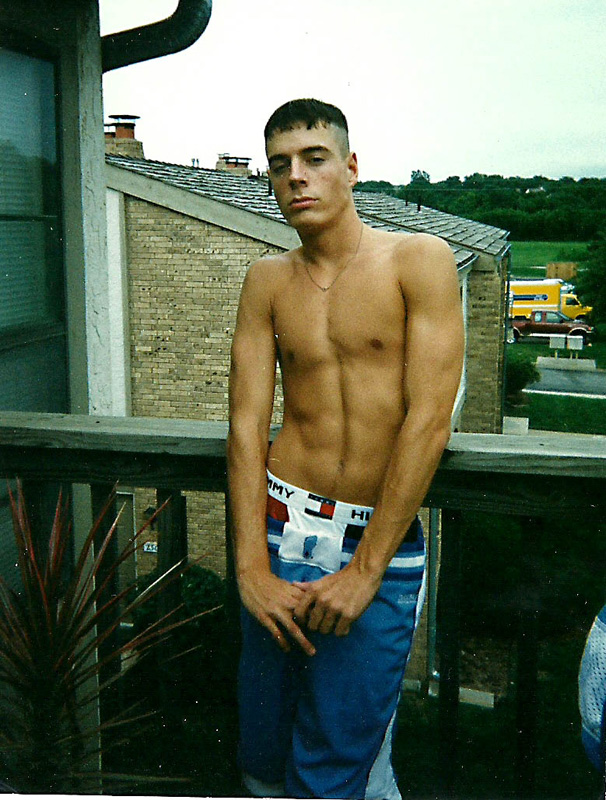 Micah Lacerte in his youth, before he took on weight training.

Stepping into the gym for the first time, Micah was overwhelmed with all of the bodybuilding equipment he had at his fingertips. As someone who never trained with weights before, Micah didn’t know what to do in order to become bigger.

In fact, it took Micah almost two years of experimenting with training and nutrition before he saw his first major hints of progress on his physique. He said;

“Early on, I thought the more I worked out, the bigger my muscles would get, but this is not true. Building muscle is a slow process – 6-10 quality pounds per year.

It takes a nutrition plan that will enable you to become stronger and force the muscle to grow. Sleep is also a huge part of the equation.”

At the time, Micah’s training and dieting routine was extremely rigorous. He would consume 5000-6000 calories every day for six months during his ‘bulk.’  But that was only half of the job done.

Micah also lifted weights up to seven times per week. His workouts lasted up to two and a half hours and were extremely intense.

After years of hard work in the gym as well as the kitchen, Micah achieved his childhood dream. He went from 140 lbs of body weight as a teen to over 200 lbs of solid muscle. 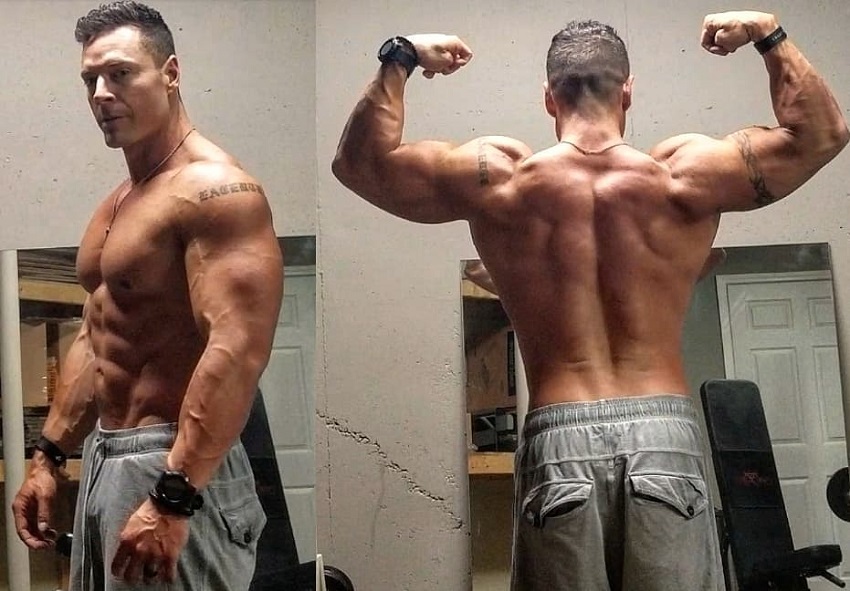 By 2005, Micah’s physique was at its peak. He soon began a career in the fitness industry, where he landed his first magazine covers. He also began appearing in America’s reality TV shows such as Manhunt – expanding his career in different directions.

Everything was going awesome in terms of Micah’s dreams and goals. But then, within seconds, his life turned upside down.

Micah was on his way to the airport flying to Tampa Florida, when a ladder fell off the back of a truck that was in front of his car. The ladder landed in the middle of the highway and caused a huge car accident. Unfortunately, Micah’s vehicle ran into the side of a man’s truck, injuring Micah’s neck and back in the process.

While Micah didn’t suffer any life-threatening injuries, he had to spend the following six months away from the gym to repair his body. During this period, he went to a chiropractor in an attempt to relieve his extremely intense back and neck pain.

Over this time period, Micah became unmotivated and depressed. Not only did he lose his physical strength, size, and flexibility, he also became withdrawn from the very passions that once made him happy.

Here’s Micah talking about this difficult time period in his life; “I started living a different lifestyle and accepting I would never be able to achieve the goals I set. I worked so hard to obtain a fit and sculpted body and within seconds, my efforts seemed wasted.

My body went into the dumps, my way of living was keeping me from advancing in my life and I was around nothing but toxic people.”

But then, as quickly as everything had been taken away from Micah, it was given back. In January 2007, a cover of Micah and Jennifer Nicole Lee landed on the stands. After seeing this, Micah went from being depressed to excited because this was all the motivation he needed to return to the fitness lifestyle. 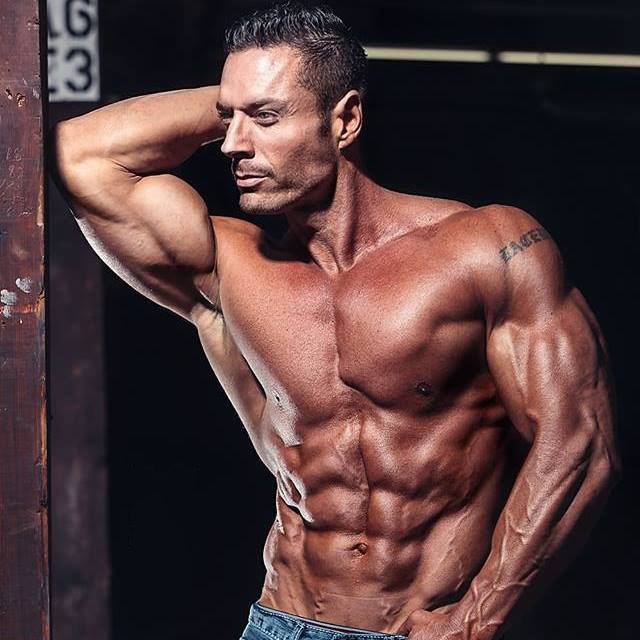 Turning His Life Around, Once Again

Micah had no knowledge of the magazine cover coming out. This was something that surprised, and motivated him to get back to the gym to reach his goals. As he said; “I knew how much work and sacrifice it was going to take but it was a challenge I needed and wanted.”

Although he was frustrated because he couldn’t lift as heavy as before, Micah knew that he would eventually come back stronger. Then, after months of struggle, he achieved his goal – attaining the best physique of his life, and later, an accomplished career within the fitness industry.

Micah’s story has since become a well-known topic within the fitness community. His inspirational comeback from the adversity is something that has helped many of his followers in facing their own struggles and reaching greatness in life. 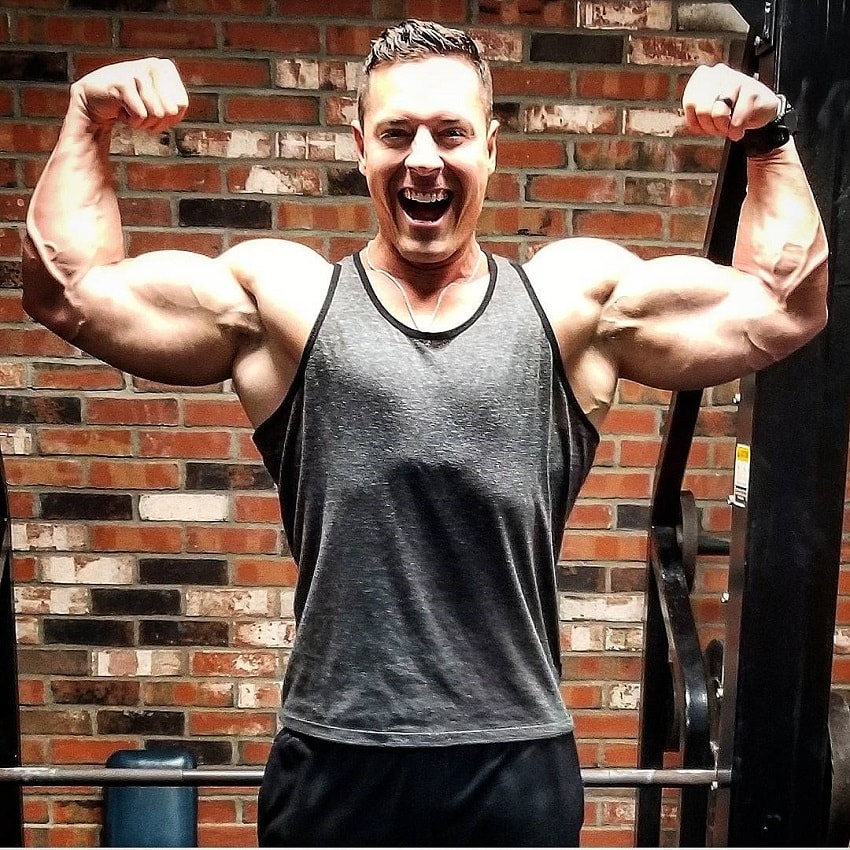 “Did you know that 80+ % of New Years Resolutions Fail By February? So instead of making a resolution, create a plan with a specific realistic goal.

Here is an example; I want to lose 25 lbs of fat while maintaining my muscle within 90 days by eliminating bad foods and drinks as well as increasing my activity level through working out 4 days per week and 4 days of cardio.”

Micah’s goal in training is all about “being an athlete not just looking like one.” To achieve this, Micah focuses on functional training just as much as he does on his strength workouts. Specifically, he works on his speed, jumping, and agility. Micah says, on a good day, he has a 40 inch vertical and runs 4.5 – 40-meter dash.

In terms of his strength training, Micah likes to train differently each week. He is a firm believer in muscle confusion. He trains with weights up to six days per week, and does cardio 3-5 days per week.

As an ‘ectomorph,’ Micah says he can afford not doing any cardio. This is because his fast metabolism allows him to eat a lot of calories without putting on extra fat. 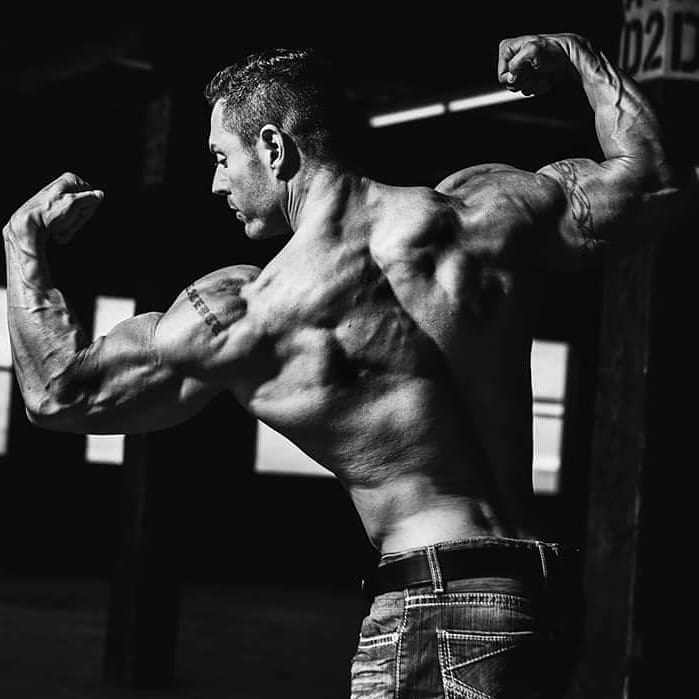 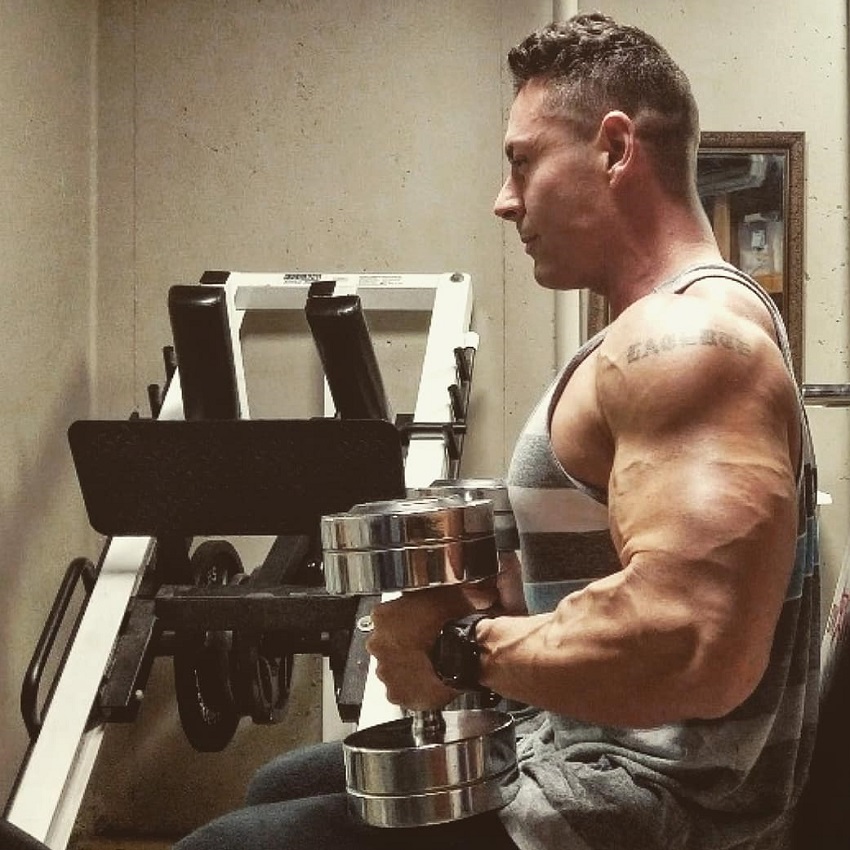 When he wants to make his workouts more challenging, Micah will incorporate advanced training techniques. Such as drop sets, super sets, or forced reps.

However, his favorite method for increasing training intensity is called Tabata Interval Training. Here’s Micah describing this type of training; “I use it for my cardio and weights, it’s very intense. I remember leaving the gym thinking I got ran over by a truck and that’s a good thing.”

The way Tabata interval training works is simple. Micah begins the workout by choosing an exercise. He then does eight sets of this exercise for as many reps as he can in 20 seconds, taking 10 seconds of rest per set. By the time he reaches the eight set, Micah is completely exhausted and ready to head home to have his post-workout meal. 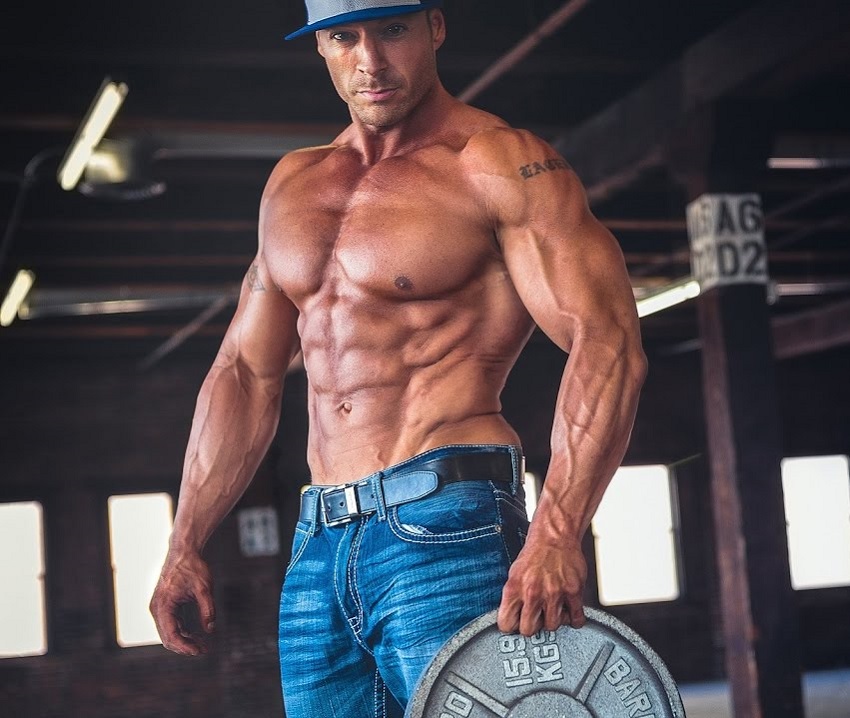 Micah is not a big fan of niche diets, such as paleo, keto, IIFYM, etc. He says, food is a fuel and he uses it for purposes of looking, and feeling a certain way, in addition to maintaining overall health.

There are no foods that he cuts out completely from his diet, but instead, follows a balanced approach throughout the year. When he gets close to a photo shoot or a fitness show, Micah will do a short carb cycle to burn off any excess body fat.

This is how his typical daily meal plan looks like; 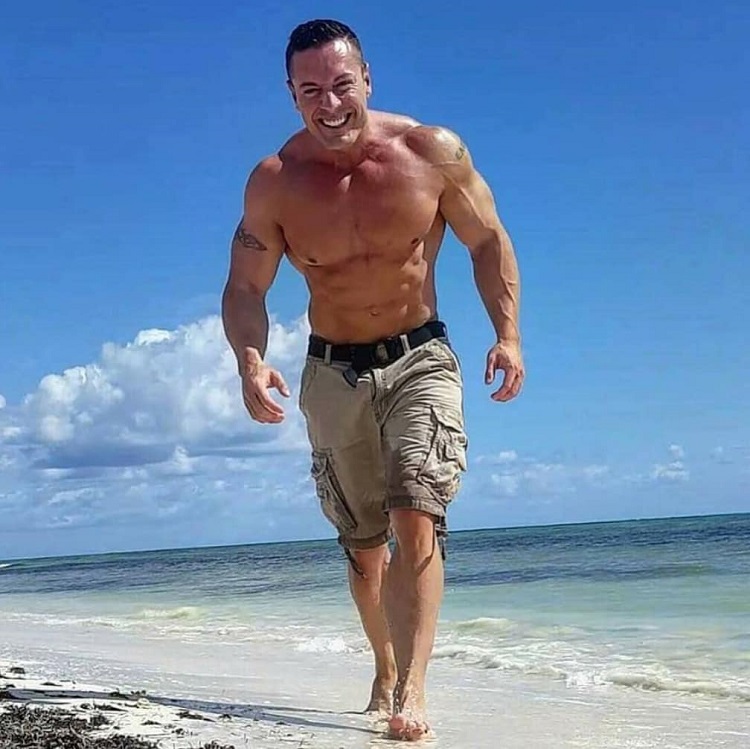 Michael Jordan is one of Micah’s main inspirations in career and life. Micah says, Michael Jordan is someone who completely changed how basketball was played and how athletes, in general, were looked at. As he said; “Those million dollar sponsorships are because of him!”

Another big influence in Micah’s life is Jean Claude Van Damme. When he was around 10 years old, Micah watched one of Van Damme’s movies, and he instantly became infatuated by his muscular physique. However, it wasn’t until he was 18 when Micah set out sculpting his physique to look like his movie hero Van Damme. 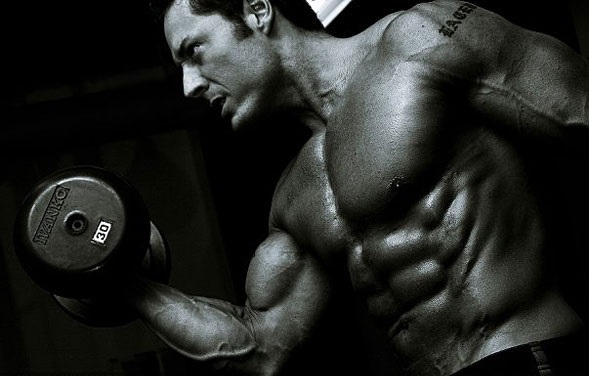 What we can learn from Micah Lacerte

Micah Lacerte had to go through numerous hardships before reaching success in fitness. This is a common theme among many other athletes, and it tells us that challenges and difficulties are a necessary part of becoming successful.

If you can look at challenges that life presents you with an optimistic attitude, then it’s much more likely you’ll be able to accomplish your goals – just like Micah Lacerte did.

Thank you so much for this amazing feature!!

Hi Micah, no problem at all! Glad you liked the write up! All the best!