Mark Mcilyar is a personal trainer, physique competitor and entrepreneur from Texas, USA. He is well-known as an online fitness guru, who built an excellent physique and ripped abs in his 50’s.

Growing up, Mark was extremely active and played a number of sports at school. He built these fitness levels throughout early adulthood, but as he entered his thirties, things began to change. He realized that the workouts he was doing in his 20’s simply weren’t having an effect anymore, so he considered his options.

After a lot of thought and research, Mark decided to design a workout routine and diet plan. He wanted to maintain high testosterone levels and build muscle, but also follow a 100% natural approach. As he created the routine, he also began to post his exercises online – receiving media attention as the hype grew

Mark appeared on several news stations and became a recognized name in the fitness industry. He continued to work out hard, well into his 60’s; enjoying the body and lifestyle he had created for himself. 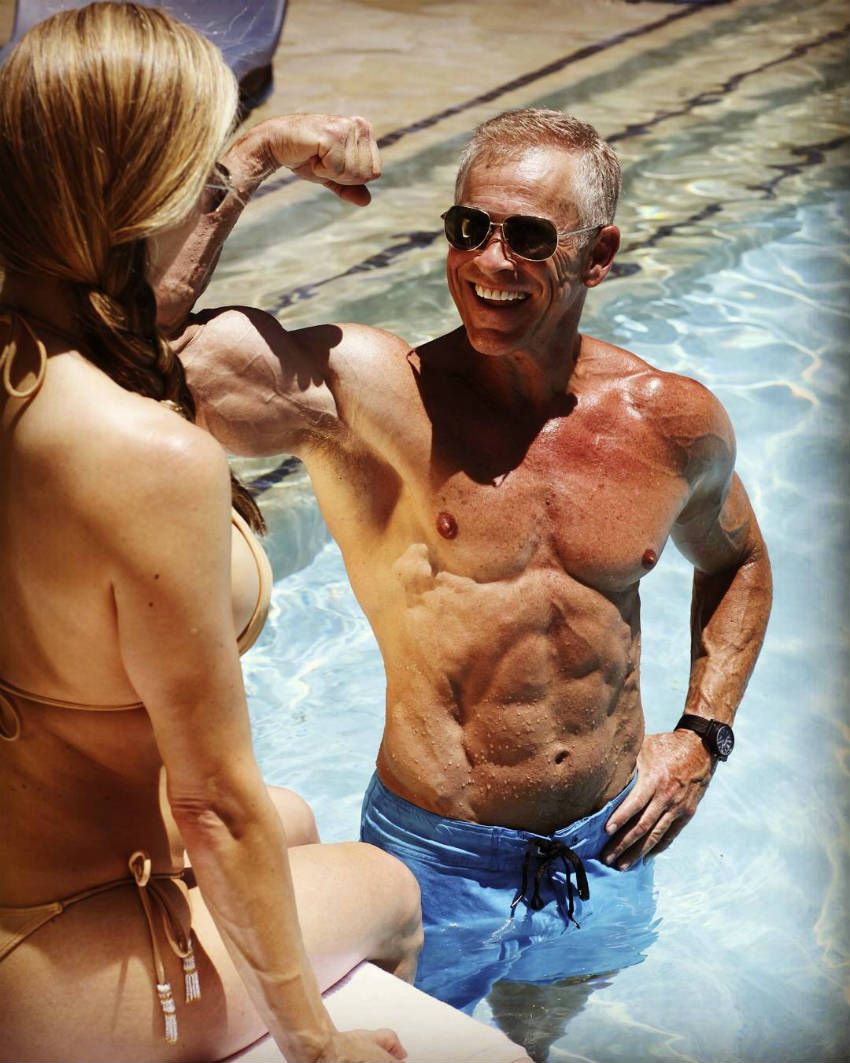 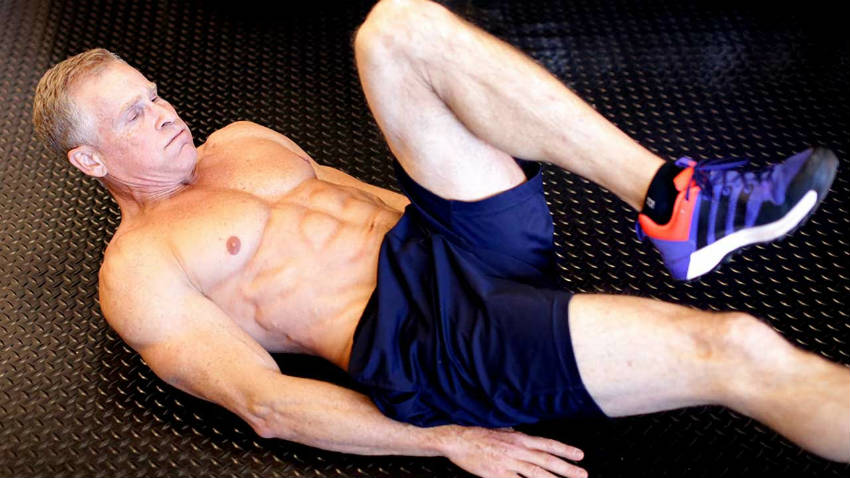 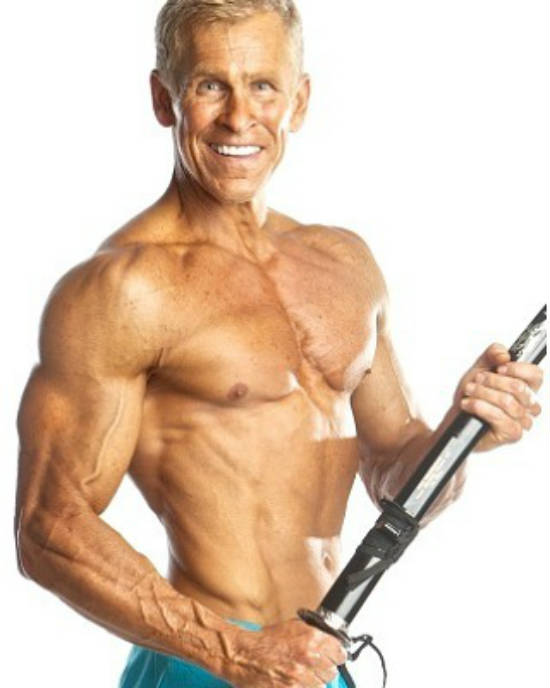 Healthy Life As A Younger Man

Growing up, Mark was always very active and loved to workout every day. He played a variety of sports such as basketball, tennis and golf and loved the opportunity to be outdoors.

As a result of this love for sports, Mark was always extremely fit and healthy. He also loved to lift heavy; building a body at a very young age which he could show off at the beach.

Loosing His Physique With Age

As mark entered his thirties, he gradually realized that he could not maintain the body he had as a younger man. He said that “at 25, you have a lot of testosterone so everything works,” but as you age, you need to switch up your workout as your testosterone levels fall.

The area which Mark wanted to change in particular was his stomach. He worked out extremely hard and completed cardio regularly, but he couldn’t shift the fat he held in his midriff.

At this point, Mark started to create a workout routine which would be suitable for someone of his age. He radically changed his approach, focusing on a number of bodyweight and weighted movements that would keep his body strong and lean. 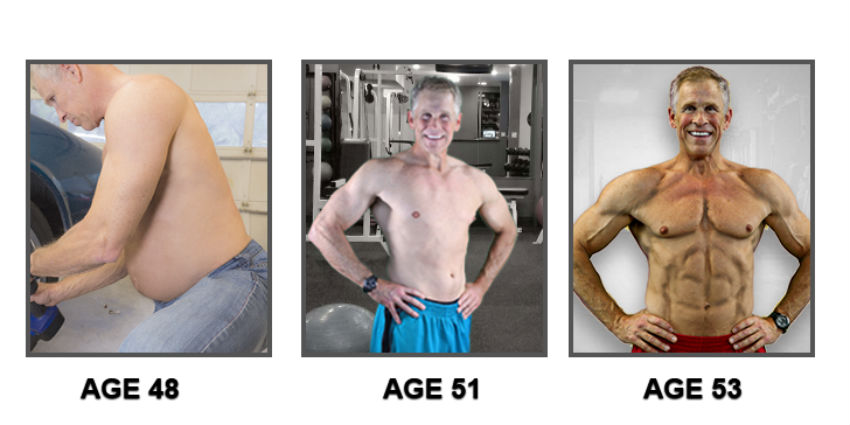 Through promoting this routine online, Mark received a lot of media attention. To his surprise, he was asked to appear on a number of news stations to explain how he stayed in such good shape.

On live television, Mark was questioned about his diet, routine and asked about how he maintains his figure. He loved the opportunity to display his figure and his routine to the world.

Results In His Physique

As mark hit 50 years old, he was still in excellent shape and lived a life full of sports and activity. One of his favorite hobbies was vintage car racing, and he attributed his wins to his upper-body strength and his ability to manhandle the car into the corners.

Mark continued to race well into his 60’s and stayed in shape and strong for a long time after that. 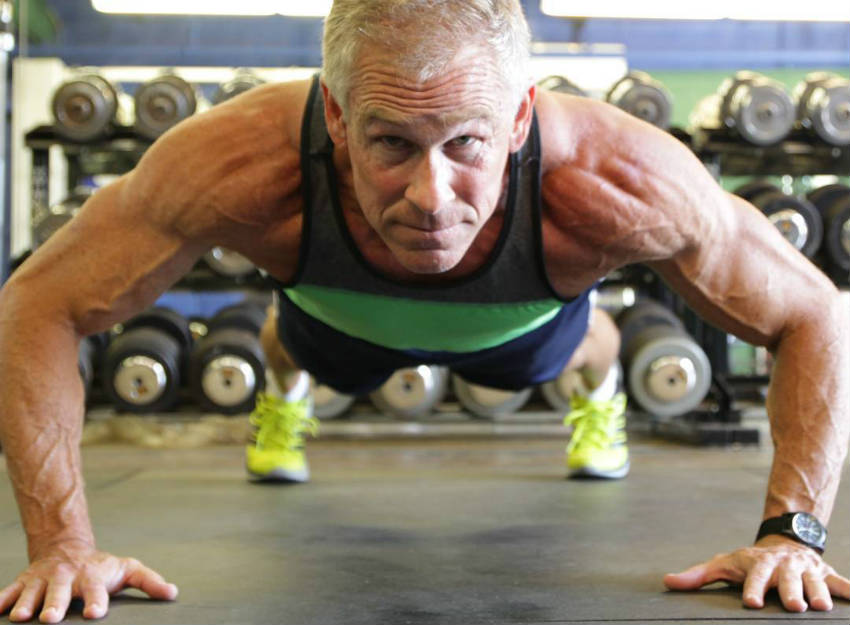 Mark believes that his ripped physique is the product of his unique workout approach. He splits his 90 day, year-round routine into three stages which he believes all men of his age should follow.

In order for these stages to be completed, he says that proper technique is essential. He also sees compound lifts as central; believing they are vital to the success of any bodybuilding routine.

His favorite exercise options are squats and deadlifts. The movements are generally more dangerous for the older man, so Mark has adapted them to suit his strength levels.

Through completing such lifts, he can keep his testosterone levels stable, due to the intensity of this kind of resistance training.

As well as compound lifts, cardio is essential for Mark to burn his excess body fat. He completes a variety of exercises in the gym such as treadmill jogs, eliptical machine walks and High Intensity Interval Training (HIIT) circuits. 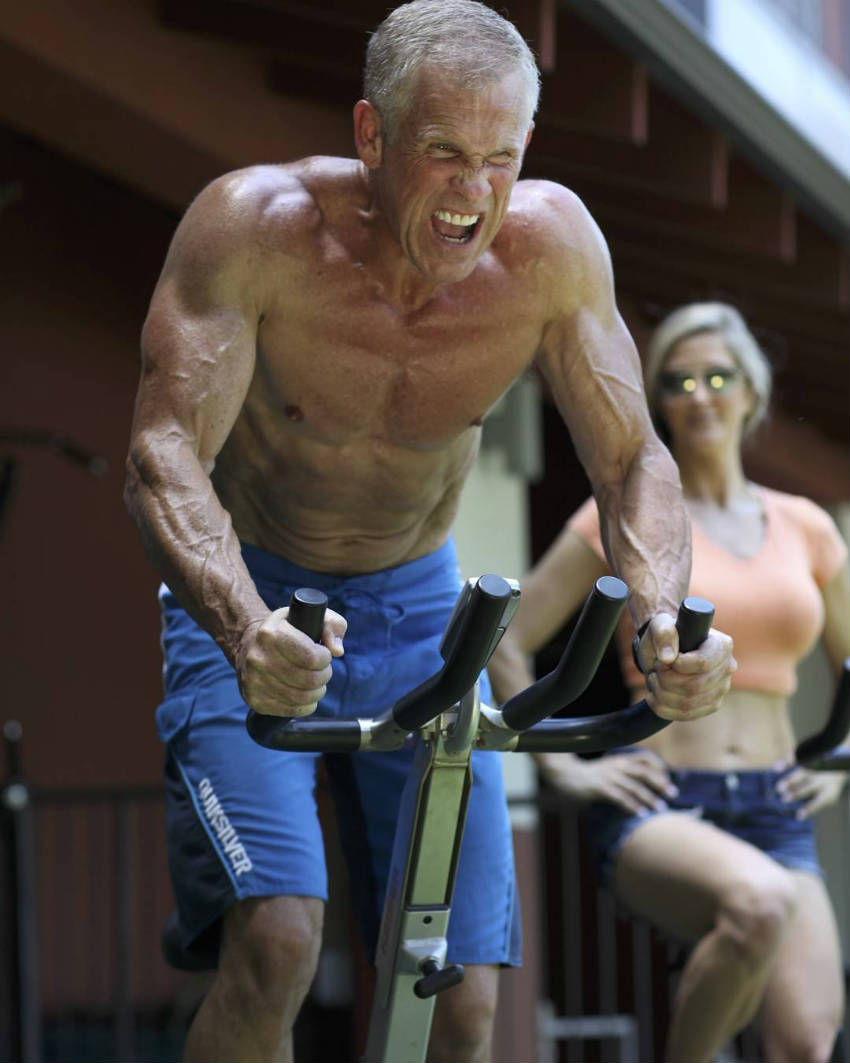 In order for Marks routine to have any lasting results, he needs to eat properly. He has to ensure that his meals meet his caloric and nutrient requirements every day.

Because of this, he created a meal plan which leaves no room for error. He dropped his carbs massively and introduced a strict diet of lean meat, healthy fats and nutritious carbohydrate sources.

Through doing this, he could work out his daily macronutrient needs precisely and lose fat, while gaining as much muscle as naturally possible.

As mentioned, lean meats are central in Marks diet and he’s created a number of recipes which pack a protein punch. He also focuses on meals which can be completed quickly and eaten “on-the-go.”

One of his favorite meals is chicken tacos. This meal can be prepared in under 10 minutes and includes chicken, salad and whole grain tortilla.

All of his meals have the background effect of naturally increasing testosterone as well. He chooses a variety of meats such a beef, as well as fish such a tuna.

These options have scientifically proven test-boosting benefits and are also tasty, healthy and extremely nutritious options for men. 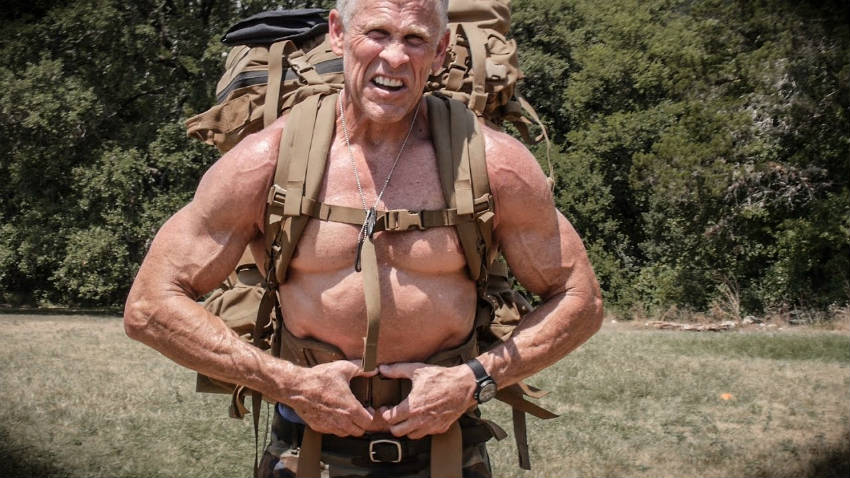 What we can learn from Mark Mcilyar

Mark proves that it is never too late to build the best physique of your life. He was unhappy with his physique as a middle aged man, so decided to design a workout which would let him increase his testosterone levels, burn fat and build lean muscle mass.

If you have a fitness goal that you would like to achieve, don’t let your age be a barrier. With a dedicated approach that takes into account your age and strength levels, you could still create a great physique.

Hello, not sure who will be reading this but just wanted to say what an inspiration Mark’s story is. I am 56 and about 60 lbs overweight. I go to the gym regularly but somewhat frustrated with lack of results. I am not afraid of hard work. I do a short worm up routine of 15 min then lift for about 30 min then finish with a 4 exercise 3 set core routine then 20 min on elliptical. I feel tons better but not dropping the weight. I only consume about 1200-1500 calories a day and have lost about 15lbs but I feel like I’m killing myself at the gym and starving myself with no real results. I’m not a quitter so I will keep going. Just wanted you to know how much I appreciate your story.

Thanks for the comment! Keep working hard and you’ll get there. If you want to get any questions answered by trainers/fitness fanatics etc then join up on forum.
https://www.greatestphysiques.com/forum/

These guys might be able to help you get out of your plateau!

Was drawn to the ad when looking for McIlyar as that is my maiden name. Wondered who his father and grandfather were. If perhaps his grandfather was my grandfather or perhaps his great uncle. My Grandfather and father came from Cambridge OHIO. My uncle Bill McIlyar lived in Ohio and had one son Jim who lived in So. California. And since the internet have seen there are McIlyars in Texas.

Hey Janet,
I’m from Dallas Texas, and my mom and dad are Don and Joan. My dad died about 7 years ago. His brother also lived in Dallas and was Kent McIlyar. I heard we had relatives in Ohio.

I always follow the workout routine of Mark Mcllyar as it is very nice bodyweight workouts, cardiovascular, body fat burning, and other various type of weight training. I wish him all the best for his success in the life. I
Do regular exercise, in the morning cardio and stretching nd in the evening dynamic stretch and light weight training. I am approaching 64 yr. Thanks a lot

Hi, just read the article after seeing one of Mark’s YouTube vids. It’s irritating to see such a flagrant disregard for facts these days, and your article is no different. Under Mark’s stats, you list his Nationality as American, while is clear he is a Texan. Please correct this grave infraction immediately. Other that this terrible oversight, excellent article. Hook ’em Horns!

Tim Bray,
Unfortunately you have fallen prey to the dogma of the “how to lose weight” BS. It’s not that complicated.

Been interested in exercise & nutrition since my HS wrestling days. Listened to all the junk out there as well as worked as a trainer. Took me decades to get to the truth and understand it better.

However, 99% of people don’t & won’t spend that much time in a gym as a lot of people suggest because there just isn’t enough time in a day to commit to just this. Moreover, it is stupid to think a person can lose weight AND get lean, exercising just 15 minutes a day.

Paramount to all the videos and gurus out there that hype how to lose belly fat or get lean over 50; they don’t mention what is most important for all people even younger than 50 – flexibly and mobility.

What good is the former without the latter? LOOKS! You won’t care as much about the former when you’re in your 50s & 60s and especially in your 70s & 80s if you live that long.

If you work on these two goals and incorporate intermittent fasting I guarantee you will reach your goals and much more because you’ll be able to out finesse in sports/ activities all the ones that stay trapped in the same dogma story that is continuously regurgitated.

Feel free to email me if you have questions. I’m not in the business, so I have nothing to gain. Just tried of seeing the same old rhetoric. Good luck.

Well Mark im 56 70 pound spare tire and a below the knee amputation with a prostethic leg.I’m gonna buy the books from you.How hard are the workouts gonna be for my leg?

Good day.
I would like to consult with a representative or advisor as I have some questions I’d Iike to clear up prior to purchasing this