Jeff Beckham is an American bodybuilder who rose to fame in 2007 after winning the natural bodybuilding competition Musclemania in the Fitness Atlantic Championships. Since then, he’s gone form strength to strength.

However, Jeff’s life was anything but easy in the beginning. He grew up without a father figure, moved from home to home, and struggled to find a place in society.

Undeterred by these events, Jeff continued to hold onto the one thing that gave him strength and courage – bodybuilding.

After years of hard work and sacrifice, and a little support from close friends along the way, Jeff competed in bodybuilding shows across America, and eventually, he won the illustrious Pro card. 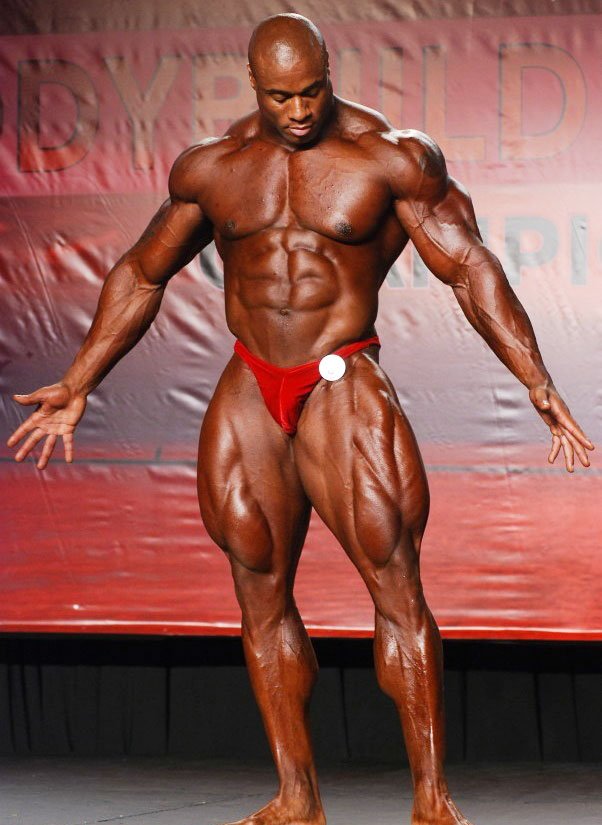 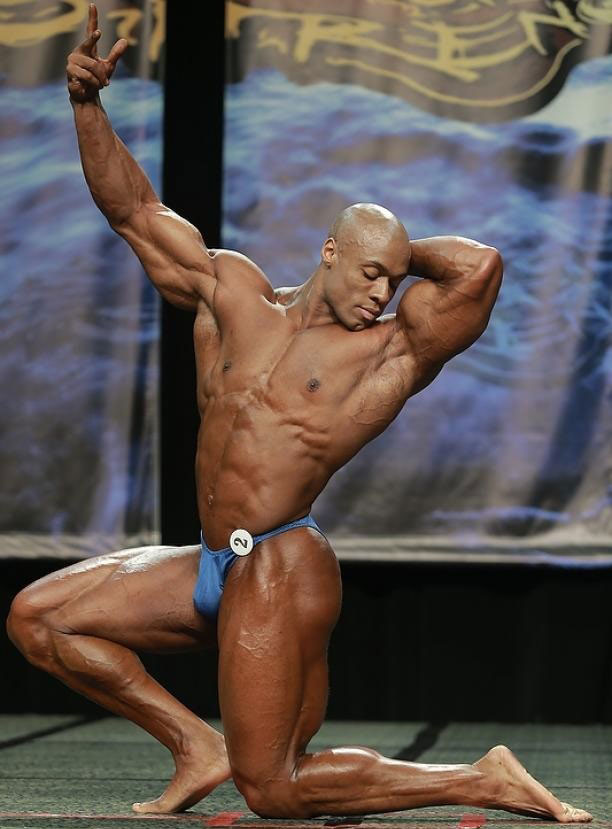 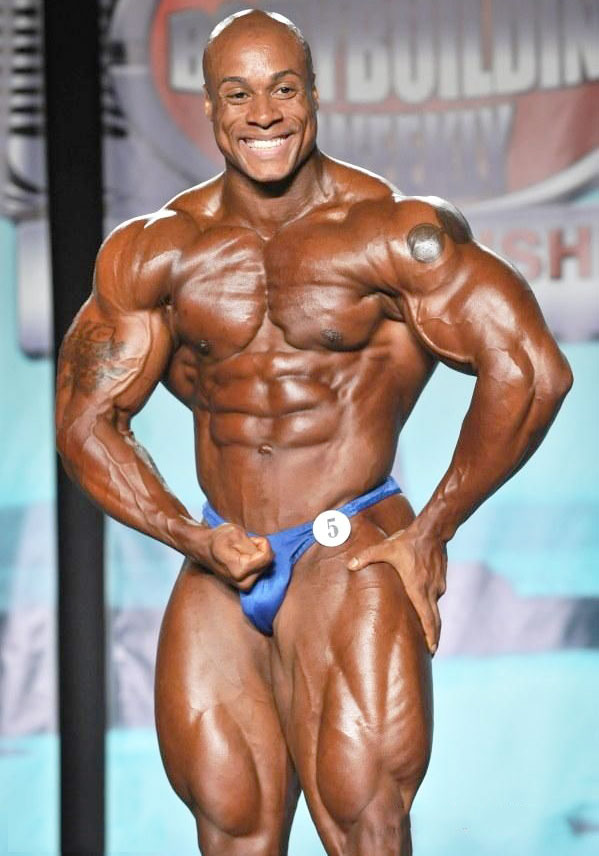 Originally from Queens, New York, and born on Jan 19, 1982, Jeff Beckham had a rough upbringing. Jeff hadn’t seen his father since the age of 6 years old, and from the age of 15, he moved form one place to another living with friends until he was 19.

His mother and the rest of his family moved to South Carolina. That’s when Jeff decided to stay in New York. It was at the age of 20 when Jeff finally got his own apartment.

A Passion For Working-Out

Jeff always had a passion for working out and keeping fit since he was 14 years old. At first, he stared wrestling in Astoria Junior High School in the 160-180 weight division, at the same time, he played basketball.

Throughout his High School basketball career as a centre, Jeff’s team was undefeated.

After trying a variety of sports, Jeff finally settled with natural bodybuilding, which he became fascinated with.

Competing For The First Time

After becoming inspired by other bodybuilder such as Arnold, Aaron Baker and Dexter Jackson, Jeff signed up to his local gym the Diamond Gym, this is where he had his very first content. After months of hard work, Jeff stepped on the stage and won 1st place.

Some time later, Jeff moved to another gym called ‘Richie’s Gym‘ in Queens New York after Diamond Gym closed down. This is where Jeff started to become serious about competing, with the help of his friends in the gym.

While Jeff trained in one gym ( Richie’s Gym ) he worked in another called Platinum Gym as an Ab Trainer. When Platinum Gym hosted their first bodybuilding show in Queens, Jeff decided to enter, and to everyone’s surprise, Jeff won the show.

After winning this show, Jeff started to see a lot of opportunities open up for him. A local paper called ‘Our Times’ did a short story about bodybuilding, where Jeff was featured.

This is where Jeff’s desire started to grow stronger. He made a plan to win his Pro card by the age of 25.

Taking his passion to the next level, Jeff entered a show hosted by the INBF sponsored by Fulton Fitness on April 4, 2005.

He took a train to the show unprepared with no posing practice, unshaven, and wearing underwear instead of posing trunks.

On that day, a natural bodybuilder called Isaac Achu saw Jeff needed guidance and support. He saw that Jeff had a lot of potential to go further, that’s when Isaac reached out.

Jeff placed second that day to Isaac’s brother – Jude Achu. With the help of Jude and Achu over several months, Jeff started to see vast improvements in his muscle size, striations, and posing routine. 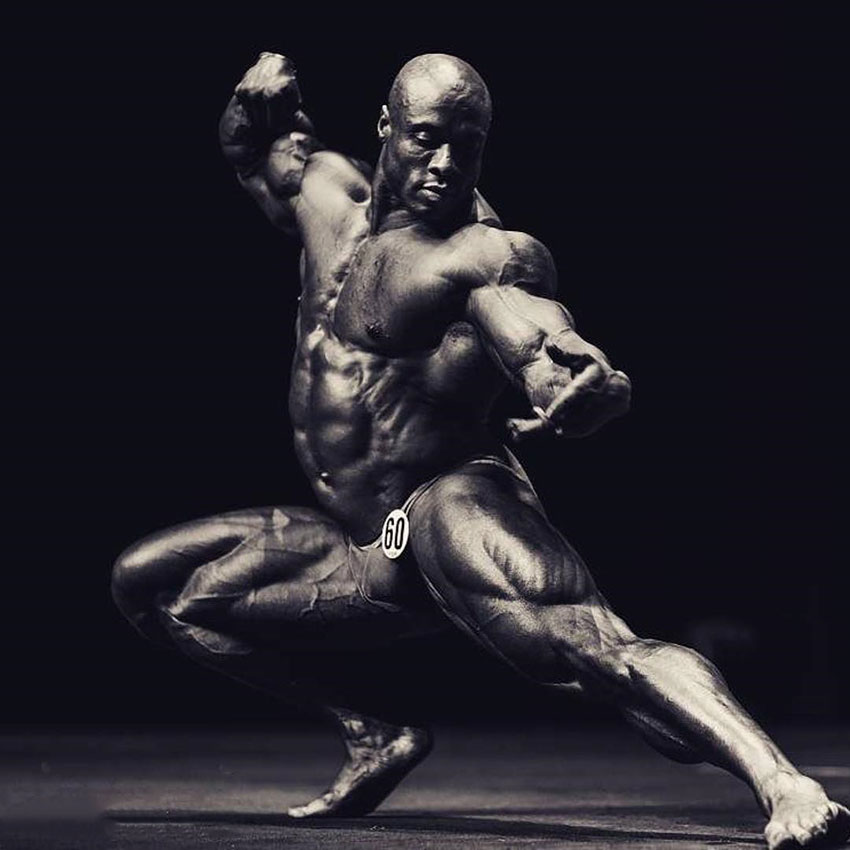 Two months after the INBF shown, Jeff entered in the Manhattan the New York City NBF. It was on that day in 2005, on Saturday the 23rd that Jeff stepped on stage and earned his World Natural Bodybuilding Federation Pro Card.

Wanting to gain more exposure, Jeff decided to give the NPC a shot. Even though these competitions were not drug tested, Jeff wanted to prove his worth on a bigger stage as a natural bodybuilder.

In 2006, Jeff took home 3rd place in the novice class of the Bev Francis Atlantic States, 3rd Novice in the Eastern USA, and 1st Novice in the NPC East Coast.

After these shows in 2006, Jeff was told that he had a shot and winning and gaining more exposure in the Musclemania, an all natural bodybuilding organisation.

It was in 2007 when Jeff went to Connecticut in the ‘best shape of his life’ and won the overall title at the Fitness Atlantic Championships, this is when Jeff turned into a Musclemania Professional.

Continuing his winning streak, Jeff traveled to Miami to compete in the Musclemania Superbody Professional World Championships, and again, he won the overall title, proving to everyone he always had what it took to become a winner.

However, due to a slight alteration in his diet where he was told carbing up with ‘runners gel’ before the show would fill his muscles out, and make him look pumped. But, on that day, the gel only made him look flat and smooth. This resulted in Jeff falling into 5th place.

Since Jeff’s early competition days, he’s been competing ever since, bringing home 1st place trophies, and other respectable positions.

Jeff now trains people as a personal trainer at Bally’s in New York City, where he’s now certified with the ACE, ISPA, and CPR.

Jeff has a strong work ethic, putting in ten day hour days training clients throughout the whole day. Jeff has become well-known in his local area, and the bodybuilding world as one of the strongest competitors or the natural bodybuilding world. 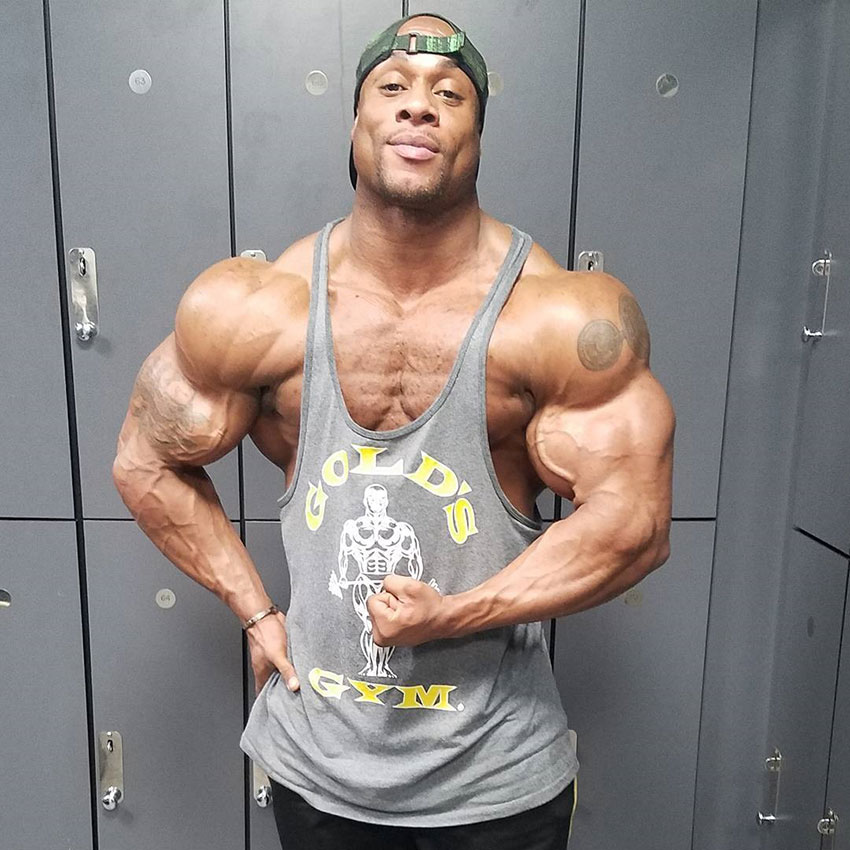 Jeff has built his incredible physique through years of hard work and dedication through the years. He uses a variety of compound lifts, with isolation exercises such as bicep curls and tricep extensions. 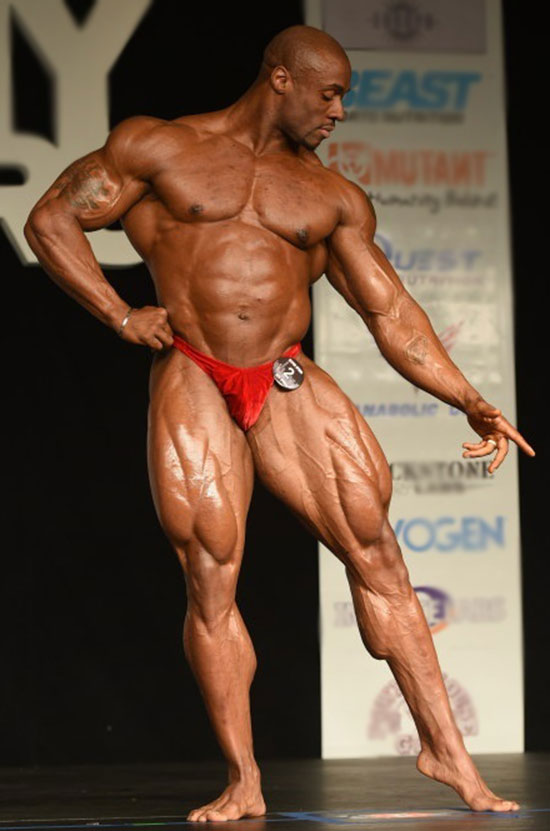 Like most professional bodybuilders, Jeff knows that he requires a lot of calories to maintain his huge muscles. His off-season is less restrictive, meaning he’ll eat most foods he feel like eating. At times, he’ll go up to 240 lbs in weight.

However, when he’s planning his nutrition before a competition, he’ll become more strict with his food choices and calories, dropping down in weight to 215 lbs.

Something extra greasy
Steak and cheese
Fries and chicken nuggets

Bucket of fried chicken
Mac and Cheese, and biscuits

For supplements, Jeff uses glutamine, a fat burner, taurine and L-Carnitine. As for protein, he’ll use a good quality whey protein throughout the whole year. 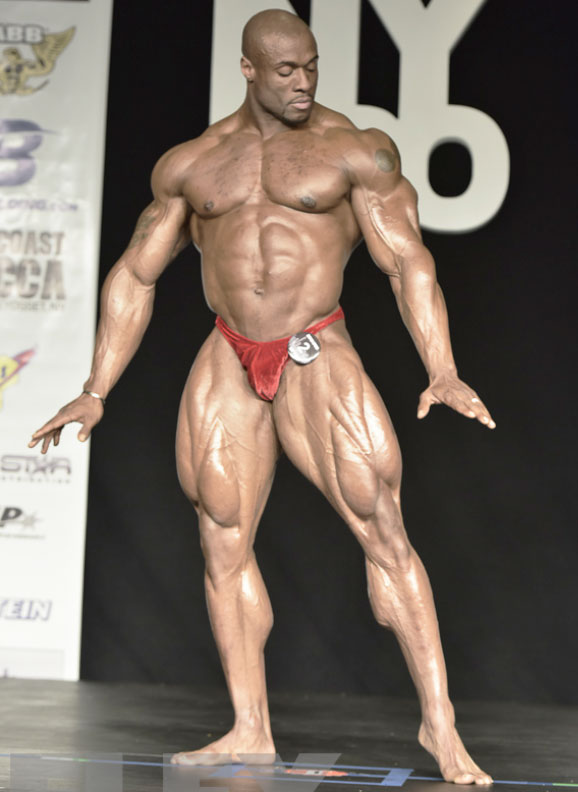 Jeff mentioned the classic bodybuilder such as Arnold, Aaron Baker and Dexter Jackson as his main idols and influences growing up.

However, in later years, his close friends Isaac and Jude Achu supported Jeff, which enabled him to take his physique to the next level. 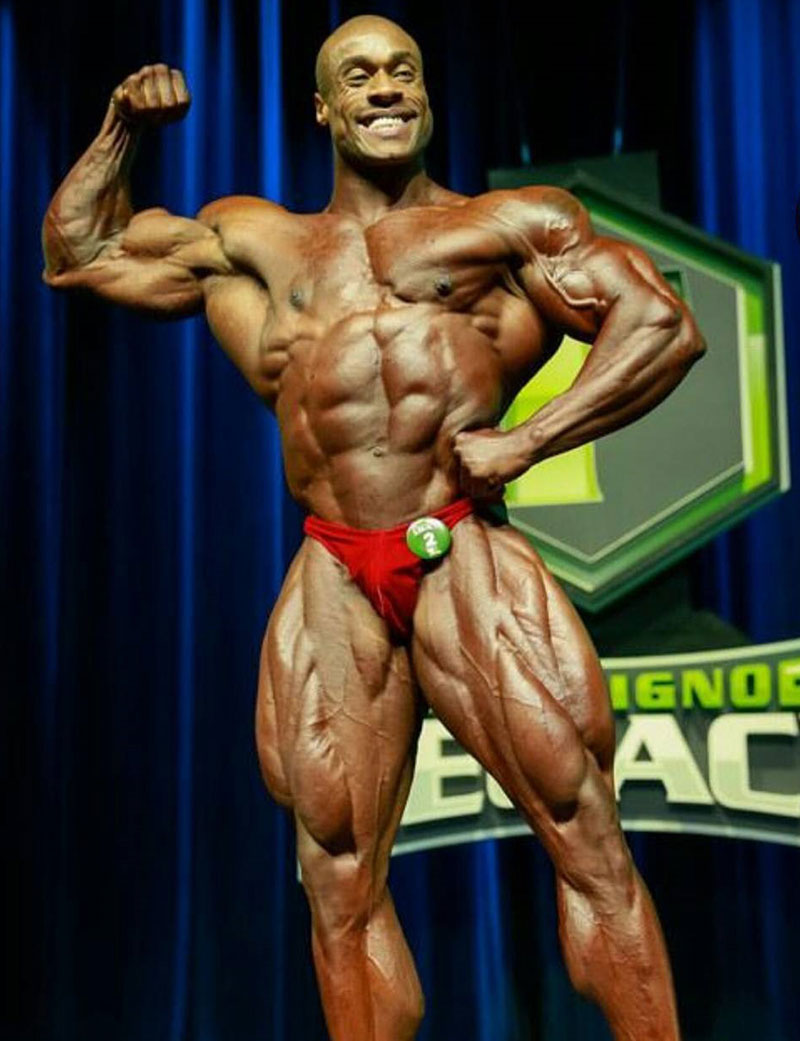 What we can learn from Jeff Beckham

Jeff started life in difficult times, without knowing his father, and moving form place to place until eventually, he found a place of his own – New York.

Battling through these difficult beginnings, along with holding onto the one thing that gave him hope, and discipline, is what set Jeff apart from the crowd.

What we can learn form Jeff is; no matter how tough your beginning was, if bodybuilding or fitness is your goal, holding onto it and making it a crucial part of your life, just like Jeff did, could improve every aspect of your life.