Jake Alvarez is an IFBB professional bodybuilder from San Diego, USA. He’s attracted a lot of attention in the bodybuilding industry, as a result of his rapid rise through the ranks.

While Jake is an example to all up-and-coming bodybuilders of what can be achieved with hard work, his physique wasn’t always impressive. In fact, growing up Jake says he was the “skinny kid” in the class. After watching the bodybuilding greats on TV, he became determined to look just like them.

Fast forward to today and Jake has transformed his physique, winning competitions for his aesthetic superiority. He has claimed his Pro Card and won several major professional shows. This is Jake Alvarez’s story: 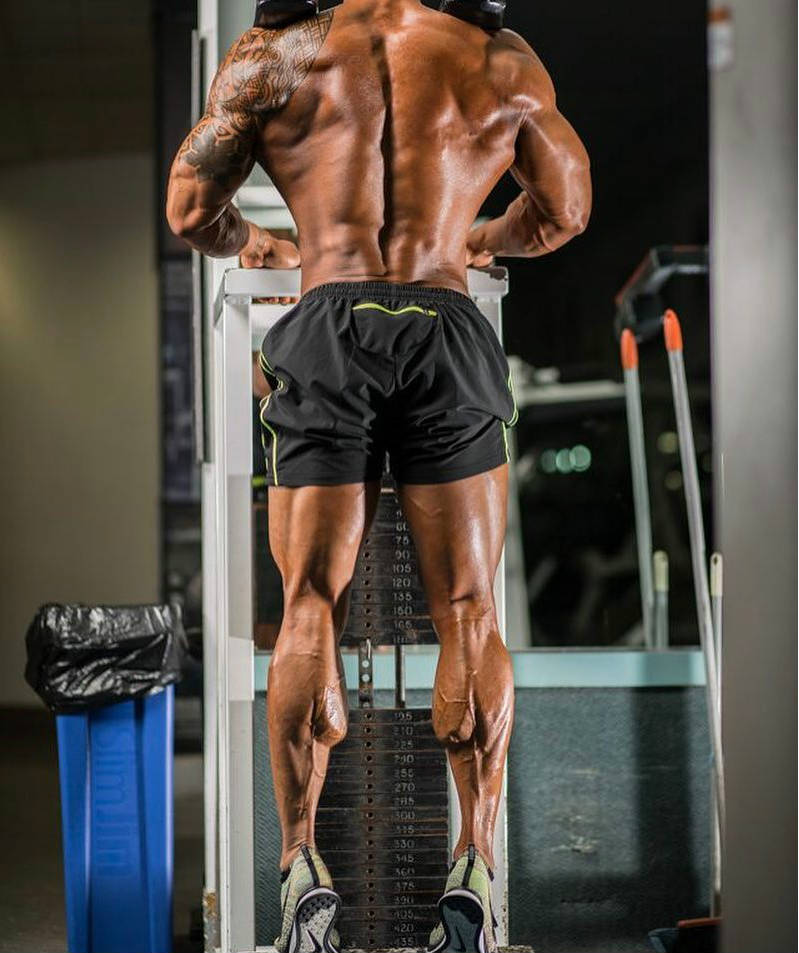 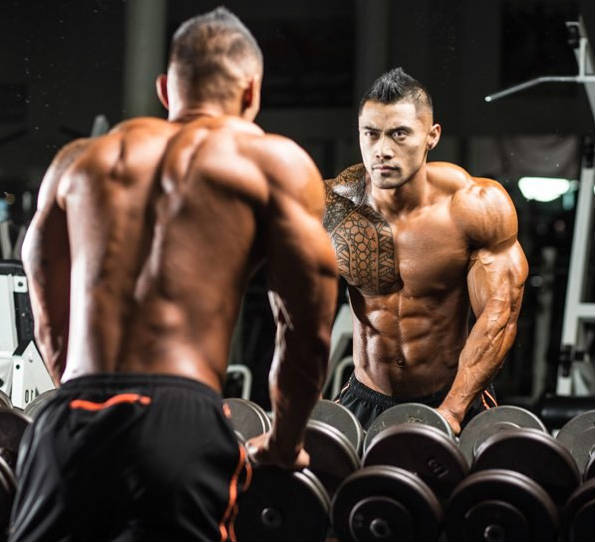 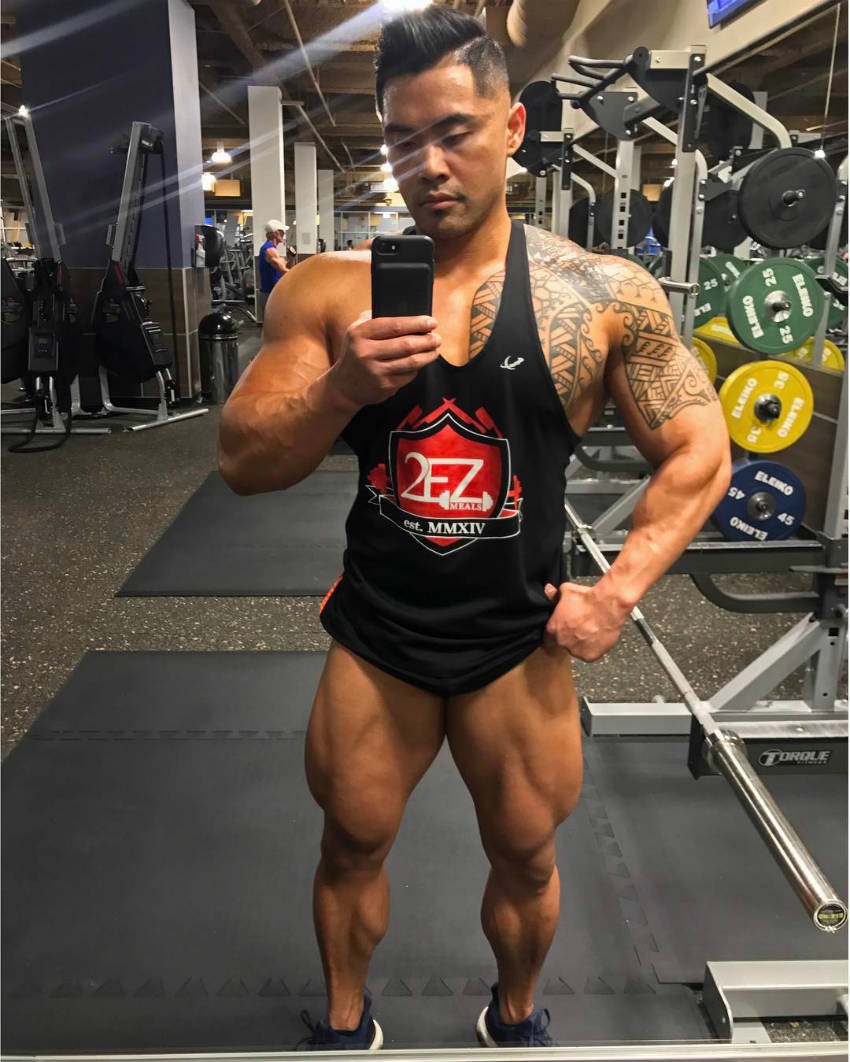 Jake was born and raised in San Diego, United States. Growing up, he says that he was never good at any sports, so was always the “skinny kid” in the class. He also mentions that he was very shy and reserved, so would never take his shirt off outside, as he thought he looked terrible.

This shame made Jake plunge into bodybuilding after high school. He says that he “made a promise” to himself to start building up his body. He wanted to increase his size massively, but he also wanted his confidence to increase with it.

Jake’s interest in bodybuilding was sparked when he first saw Arnold Schwarzenegger and Frank Zane on television. He says that the proportions they displayed, as well as their dedication to the sport, inspired him to build his best body.

At the end of 2012, he was going through a “tough time” in his life which pushed him deeper into the bodybuilding lifestyle. He spent as much time in the gym as he possibly could, deciding that he had the potential to compete.

During this period, he also says that he spent a lot of time on Instagram, “scrolling around fitness profiles.” He saw pictures of guys on stage with board shorts competing and knew that he could one day join them. At this point, he was hooked.

Going For His Pro Card

Jake’s first competition was the 2013 NPC California State Championships. He trained for months and months to prepare himself for the show, so was ecstatic to come away with a 1st place trophy. This was an amazing experience for Jake; he says that, at this point, he knew that bodybuilding was the career for him.

In 2014, Jake decided that he would go for his Pro Card at the NPC USA Championships and begin his professional journey. He focused on his nutrition closely – creating a new meal plan and fine tuning his workouts to prepare himself for what was ahead.

Due to this hard work, he managed to land an excellent 1st place position. He now had a Pro Card and was about to brush shoulders with the best bodybuilders in the business.

2014 was a huge year for Jake. He competed at 6 competitions and landed a string of top 3 finishes. His professional success came at the IFBB Sacramento Pro where he achieved a 2nd. He followed this up with another incredible 2nd place at the IFBB Titans Grand Prix Pro.

This successful streak allowed him to qualify for the 2015 IFBB Olympia Weekend – the same show which he watched on TV as a teen. He came 16th at the competition, but learned a massive amount from the experience.  The confidence he gained from this show would allow him to bag another two impressive 2nd place positions at the 2015 IFBB San Jose Pro and the IFBB Atlantis Pro of the same year. 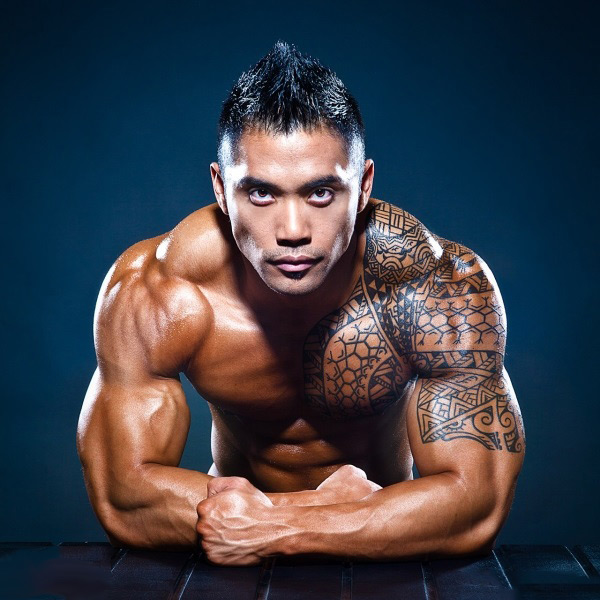 Jakes training approach is to train one major muscle group every day. He splits his week into a chest, back, delt, and leg workout. He has always focused on lifting as heavily as he can; training to failure and pushing his body to its limits.

His favorite body part to train is his chest. He says that his chest has always been the muscle group which lags behind other areas. He says that he has managed to overcome this genetic difficulty through “proper guidance” from his coach.

He has been able to learn exactly how the pectoral muscle functions. Through adjusting his form, he has worked out how to stimulate his muscle correctly. He wants to turn his weakness into a strength and show the world his progress. 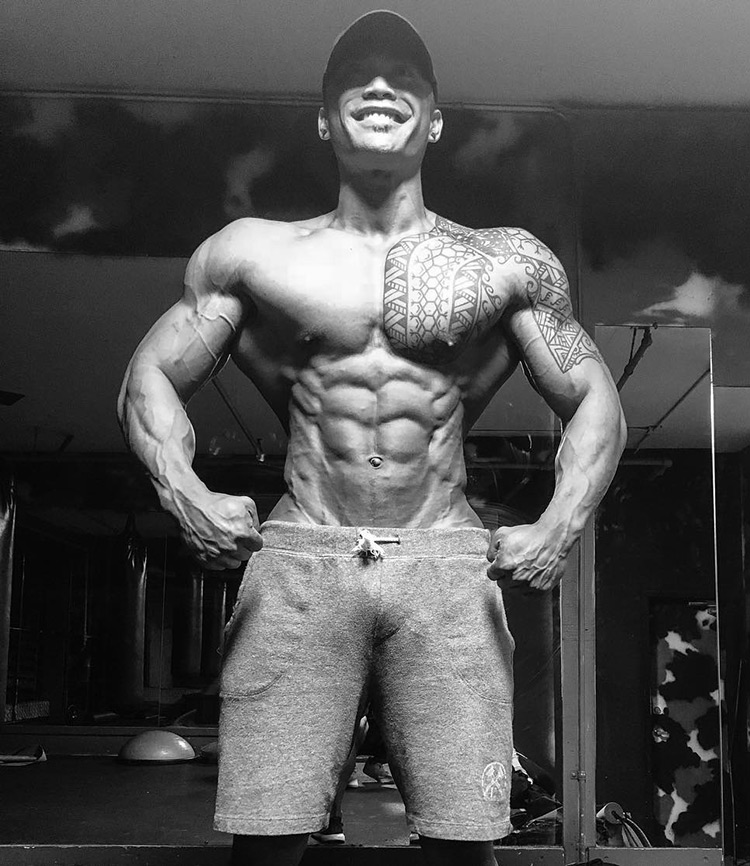 Tuesday: Chest And Back 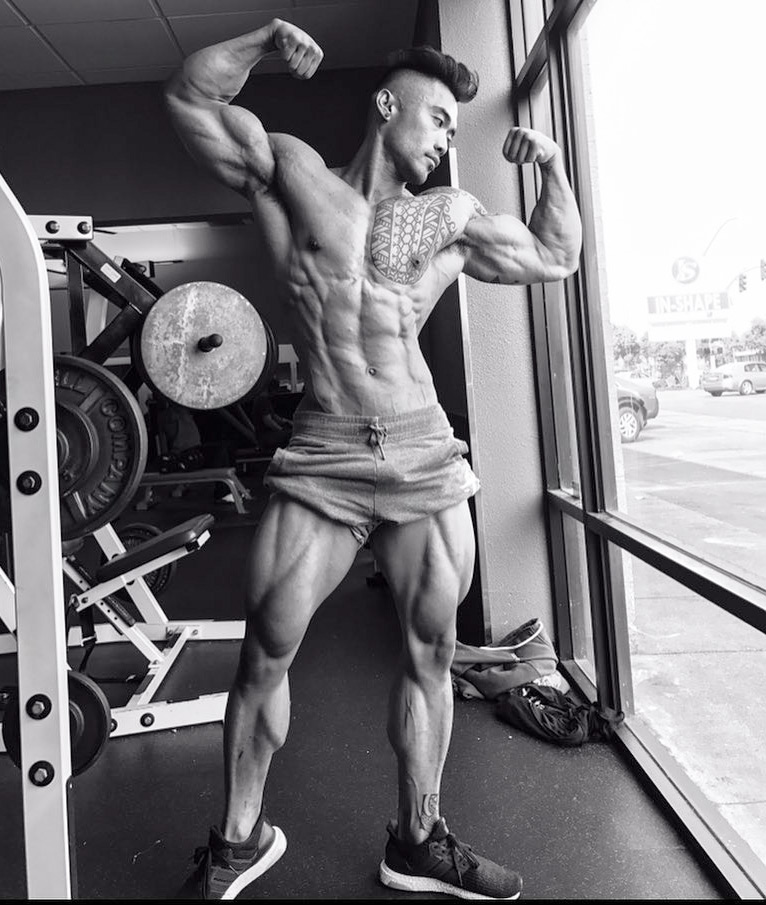 When it comes to his cardio workouts, Jake loves to mix it up. He enjoys completing sessions on the stair master, as it is a predictable and grueling workout once the body becomes exhausted. Alternatively, he will complete old- school workouts such as rope skipping.

If he can, he will also get outdoors and jog, or complete HIIT workouts. He values the High Intensity Interval Training as it really works him to his limits and increases his heart rate massively. 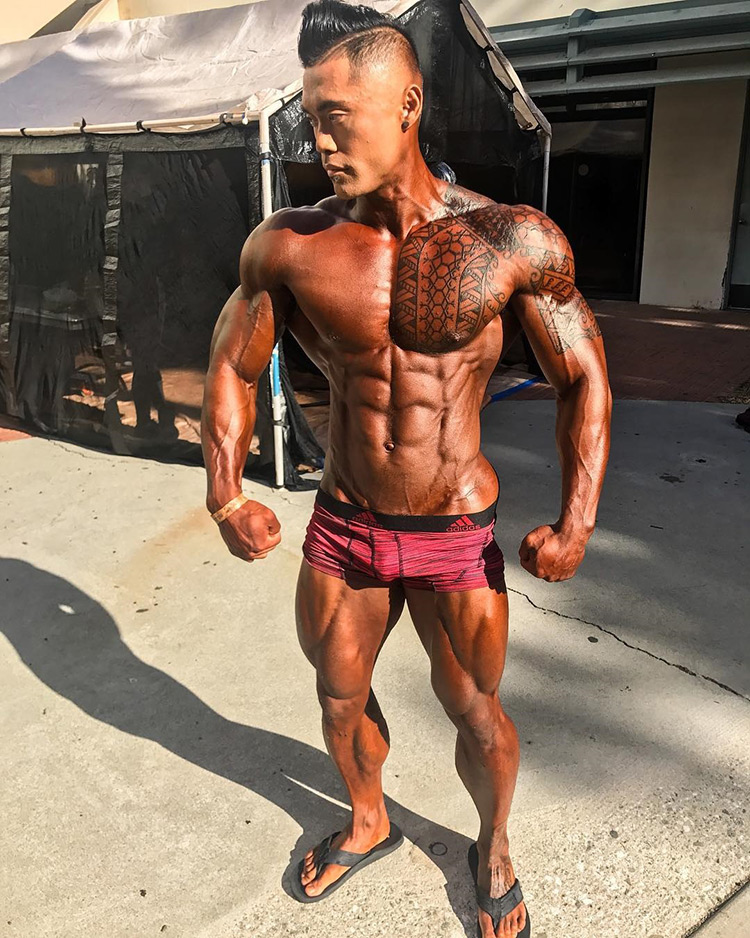 Jake practices ‘Flexible dieting,’ which means that he doesn’t follow a traditionally strict bodybuilding approach and can experiment with new foods. His coach still makes sure that he receives adequate protein, fat and carbs though, to ensure he stays within his macro needs.

Supplements are also crucial in Jake’s diet. He uses a variety of supplements to maintain his size and strength, such as fat burner pills and creatine. He also takes general multivitamins and fish oil capsules. 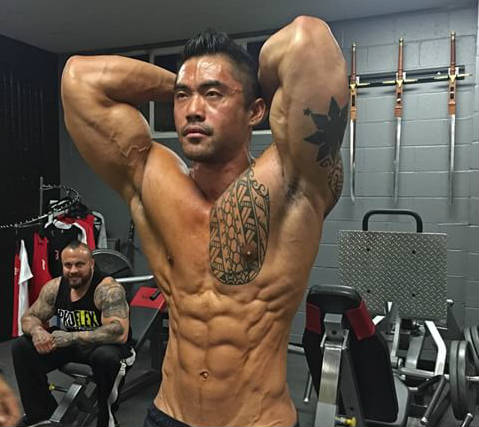 Jake’s idols have always been the greats – Arnold Schwarzenegger and Frank Zane. He loves to watch as many old videos as he can – knowing that he can learn everything he needs to know from the men who have already made their mark. 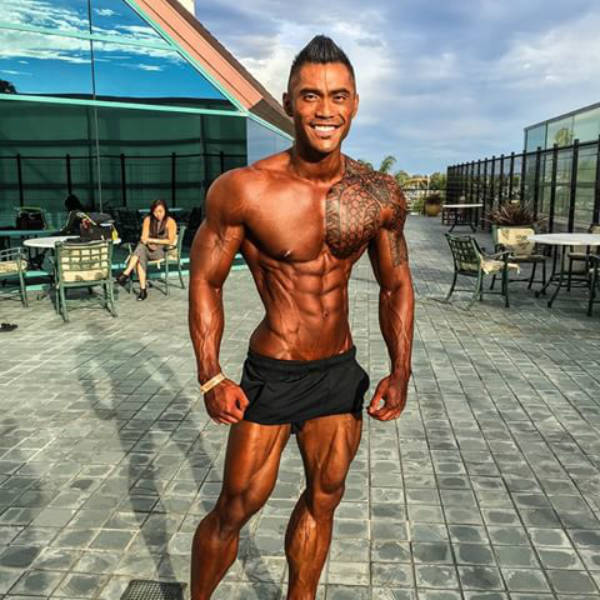 What we can learn from Jake Alvarez

Jake’s story proves the power that bodybuilding can have in someones life. He grew up as a “skinny kid” who was ashamed of his body, but working out gave him the confidence he need to start an entire career from his physique.

If you are struggling with your own workouts, think about Jake’s struggle and walk your own path towards your fitness goals.

I dont belive this guy. Steroids and other poison.