Gerald Williams is an IFBB Professional bodybuilder and sponsored athlete hailing from Berkeley, California. He became involved in sports from an early age, setting him up to become a success in bodybuilding.

However, Gerald would eventually hit a set-back – having to deal with the loss of both parents within a short space of time. This had a negative effect on Gerald’s life – and his ability to cope with everyday life.

However, Gerald was able to put all of this in the past, to move on with his life. He took some time out from bodybuilding, concentrating on building upon his other interests including real estate and his education.

Eventually, he made a comeback in 2015. His career quickly began to take off again, earning his pro card within months. Gerald aims to inspire others to broaden their horizons – setting them up to become the best possible version of themselves. Here is his story. 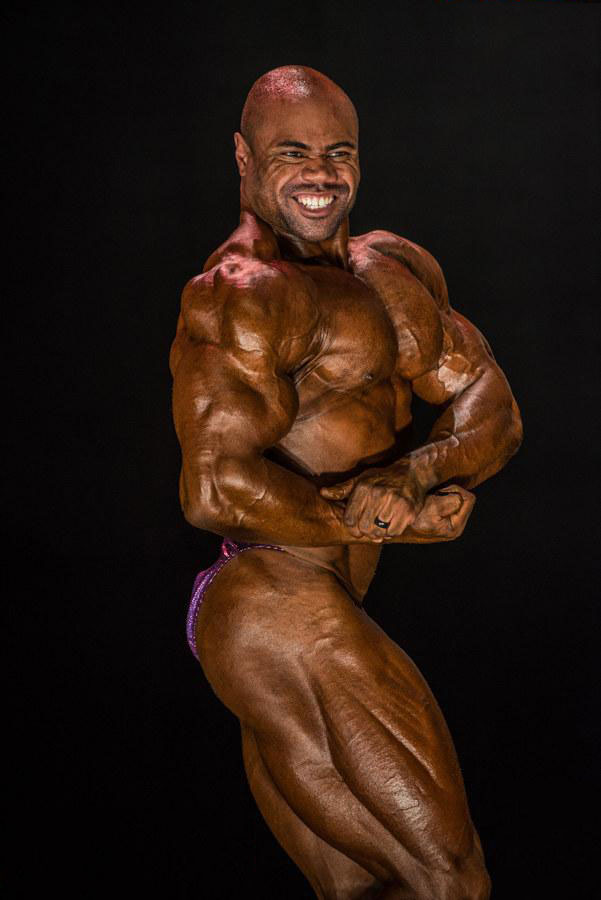 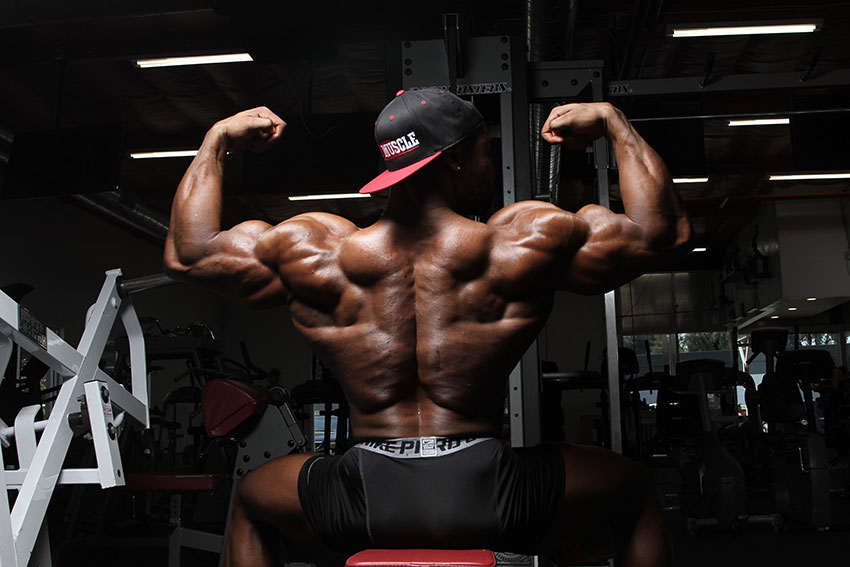 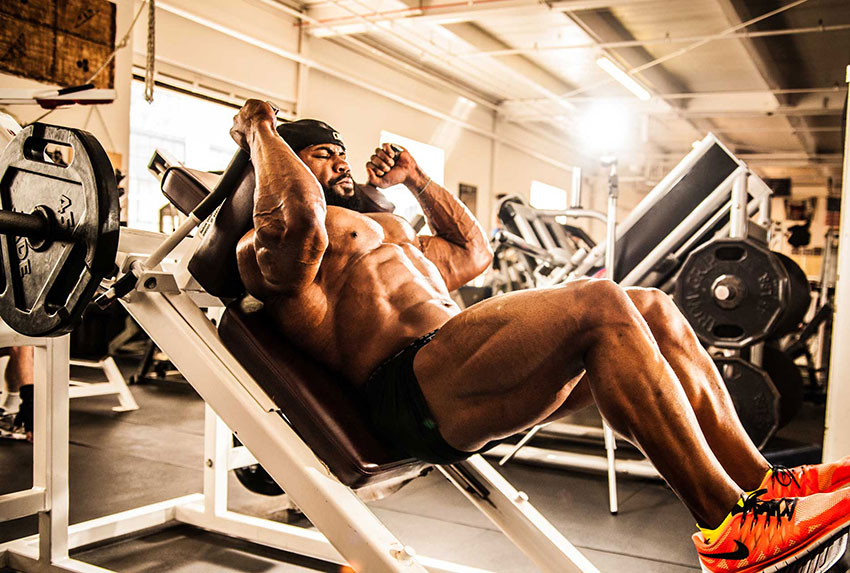 Gerald Williams was born in Berkeley, California in 1987. He grew up in a close family, with his parents bringing him up to always have a positive mental attitude. This would help him shape his career, taking any negativity within his stride.

His fitness journey started at an early age, when Gerald began to build a reputation as a formidable soccer player. Eventually, this would lead to a call up to the United States National Soccer team, showing that Gerald had great potential in the sport.

However, upon starting high school, it was Gerald’s wish to broaden his horizons further. Gerald had a love for training at a high intensity, so he began to play American football instead – offering him the chance to fulfill this passion.

Gerald continued to play American football until his senior year in high school, when he decided that it was his wish to follow a different path – bodybuilding.

Starting Out As a Bodybuilder

Football had paved the way for Gerald to make the move into bodybuilding. He would need to weight train on a regular basis, which is something that he thoroughly enjoyed.

Consistent training in the gym led to significant progress, as Gerald began to gain serious lean muscle mass. This is when he was encouraged to compete in bodybuilding – taking his fitness journey to the next level.

Gerald eventually made the decision to leave his high school sports behind, turning his passion for weightlifting into a career. He put all of his focus into the preparation of bodybuilding competitions. Soon enough, Gerald was ready to start a new chapter of his life.

Gerald’s bodybuilding career began from an early age. He appeared in his first bodybuilding competition at the age of 18, where he placed 2nd at the NPC Contra Costa Teen Open.

Gerald became instantly hooked – cementing his bodybuilding passion. He used this as a platform to take his fitness journey to the next level, going on to appear in several bodybuilding competitions.

However, the highlight of his junior bodybuilding career came in 2005. He achieved his goal of winning the NPC Teen Nationals, finishing in 1st place overall.

Gerald continued to compete right up until 2008, where he finished in 10th place at the Nationals Open Heavyweight division – his lowest ranking so far. This is when Gerald hit a set-back, which completely changed the plans that he had laid out. 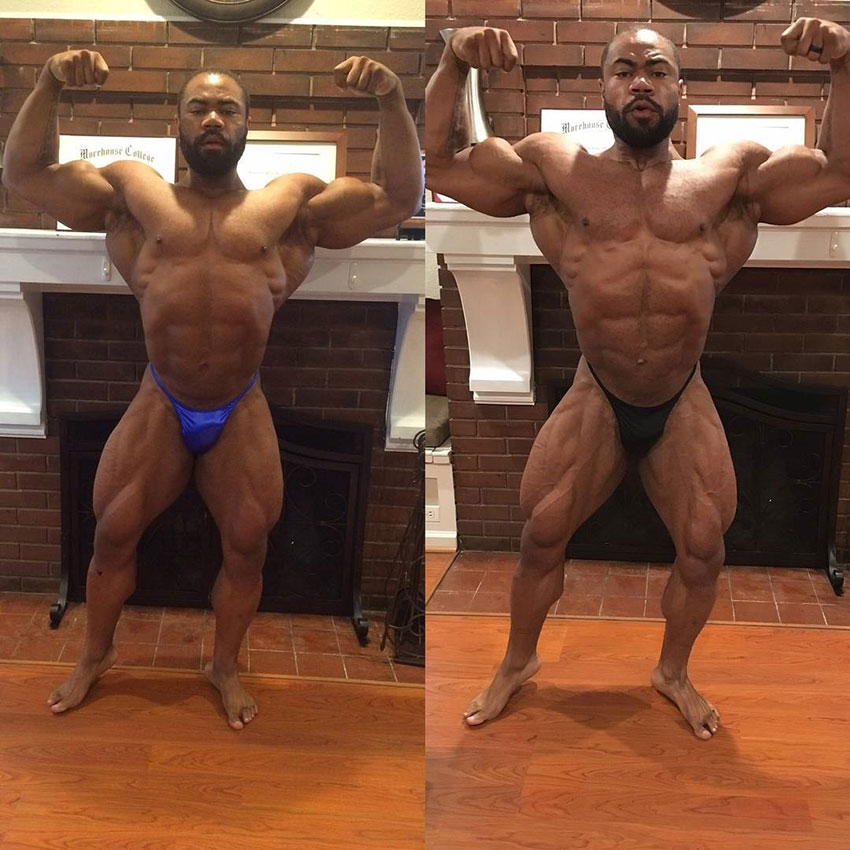 Personal difficulties meant that Gerald would take a lengthy seven year break from bodybuilding. His parents both passed away within a short space of time – really hitting him hard. Gerald was left absolutely distraught, and his competition rankings were affected as a result.

It was at this point Gerald realized that he needed to make a living outside of bodybuilding, focusing on his other passions in life, including real estate and his academic career.

It dawned upon him that it was important to have a fall back option, just in case things didn’t work out. He wished to expand his horizons, and now was his chance.

Building a Life Outside of Bodybuilding

Gerald would continue to work on his other interests for a total of seven years. He began by concentrating on his education, starting an undergraduate degree at university.

Gerald completed his undergraduate course, to then begin work on gaining a masters. He was able to achieve this, but he wanted to take his education even further. Gerald would then start his PhD, eventually becoming an adjunct professor of Psychology at the Peralta Colleges – reaching new heights in his life.

In addition, Gerald built upon his interest in real estate by starting his own business. He quickly found success – now making a living on his own, away from the bodybuilding stage.

However by 2015, Gerald felt ready to make a return to bodybuilding. Having got other areas of his life in check, he began to make the necessary steps to return to the bodybuilding stage.

Gerald’s fitness journey began once more. He started to regularly train in the gym, picking up where he left off to build a physique ready for competing.

However, it didn’t take long for Gerald to realize just how much things had changed. A long break from bodybuilding meant it would take Gerald a while to get used to training – working extremely hard to readjust his body.

Gerald had to increase the intensity and volume of his training to be able to succeed in his bodybuilding career. Through dedication and consistent training in the gym, he was able to achieve this.

Gerald’s first competition since returning to bodybuilding was at the 2015 NPC Los Angeles Championships Open. He was placed 1st & overall winner – reigniting his bodybuilding career.

Where is He Now?

Gerald was able earn his pro card within months, placing 1st and 2nd overall at the NPC North Americans Open Heavyweight in 2015. Now aware of his capability to bounce back, Gerald used this as a basis to really kick his fitness journey up a gear.

IFBB Hall of Famer Chris Cormier coached Gerald, ensuring that he remained focused to continually progress in the gym. Their relationship became ever closer as Gerald looked to make his mark on the IFBB professional bodybuilding scene.

Gerald’s fitness journey would eventually lead to qualification for the 2017 Mr Olympia – his professional bodybuilding career reaching its peak. 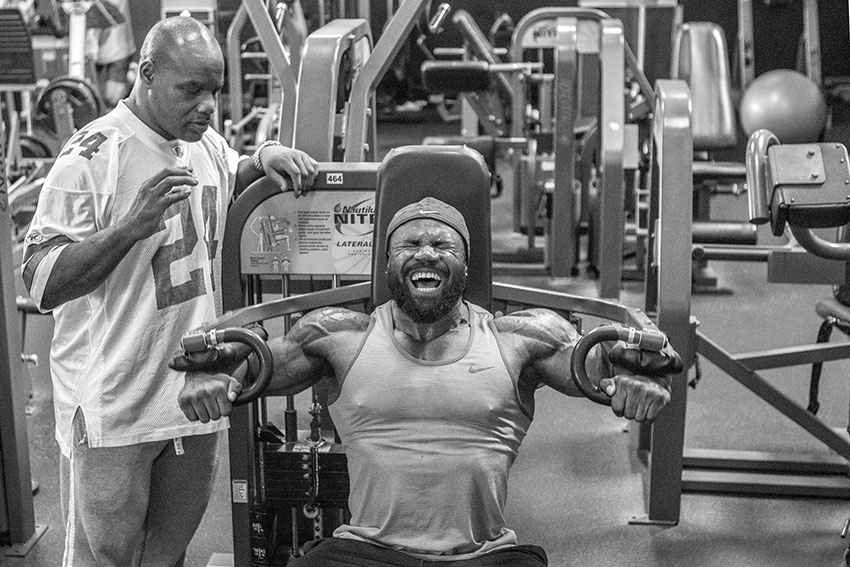 Gerald follows a hectic schedule, but he ensures this doesn’t get in the way of his training. He works out on a regular basis with his trainer, knowing he must stay consistent. Otherwise, this would make it difficult for him when preparing for competitions.

Gerald maintains a positive mindset, but at times he feels as though he needs an extra push. To achieve this, he makes use of his supportive training environment – taking on board guidance from both his trainer and coach to remain on track.

Gerald focuses his training with low reps at a heavy weight, making sure he feels a contraction when performing each rep. By doing this, he is able to continually build lean muscle mass. A workout he uses in preparation for a competition is listed below:

Arms and Back Workout 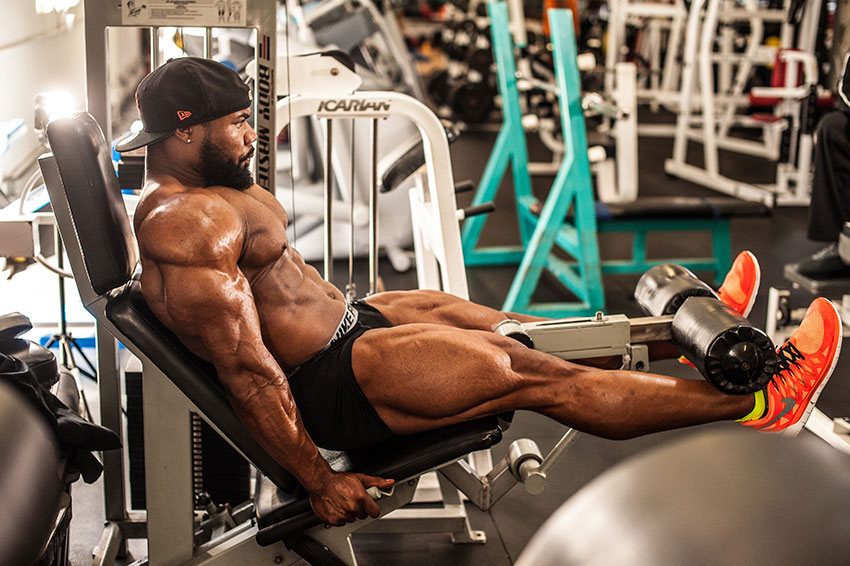 Gerald is a busy individual, quite often on the move. However, he doesn’t let this negatively impact his nutrition. He follows meal plans set out to him by his nutritionist. This enables him to continually build on his phenomenal physique.

Gerald’s daily diet revolves around a high amount of protein, along with complex carbohydrates and healthy fats. He lists breakfast as one of his most important meals. This leaves him feeling energized, ready to tackle the day’s events. A meal that Gerald often eats for breakfast is listed below:

Breakfast Whilst on The Move 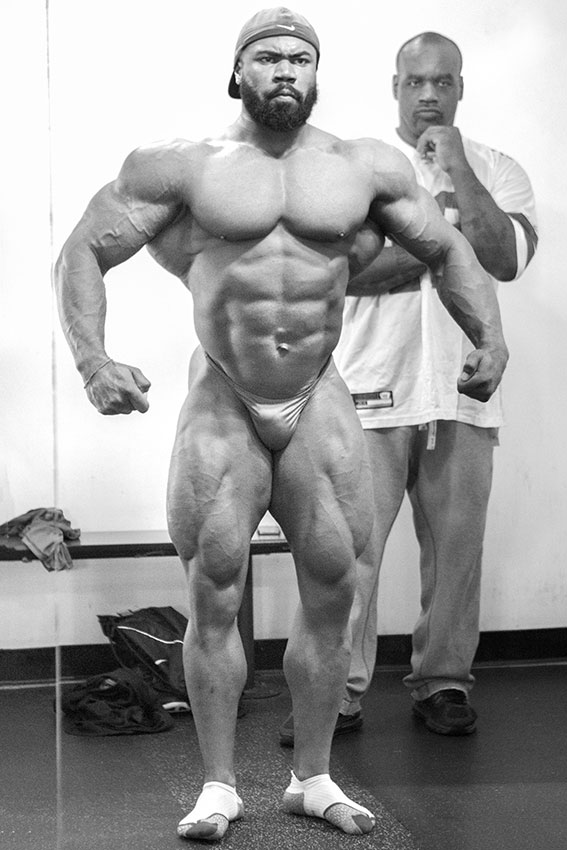 Gerald sees Chris Cormier as one of his biggest influences in moving forward his bodybuilding career. They met in 2005 when Gerald was starting out as a bodybuilder. Since then, Chris has been his coach, mentor and close friend.

On Chris’ influence, Gerald had this to say:

“Big thanks to Chris Cormier for all of his help and support. This guy went above and beyond to be available to me and is always coaching me up”.

Chris saw potential in Gerald, knowing that he would be able to take his fitness journey to the next level. He encouraged Gerald to remain level headed, not getting carried away. By doing so, his bodybuilding career could continually progress – solid results soon followed. 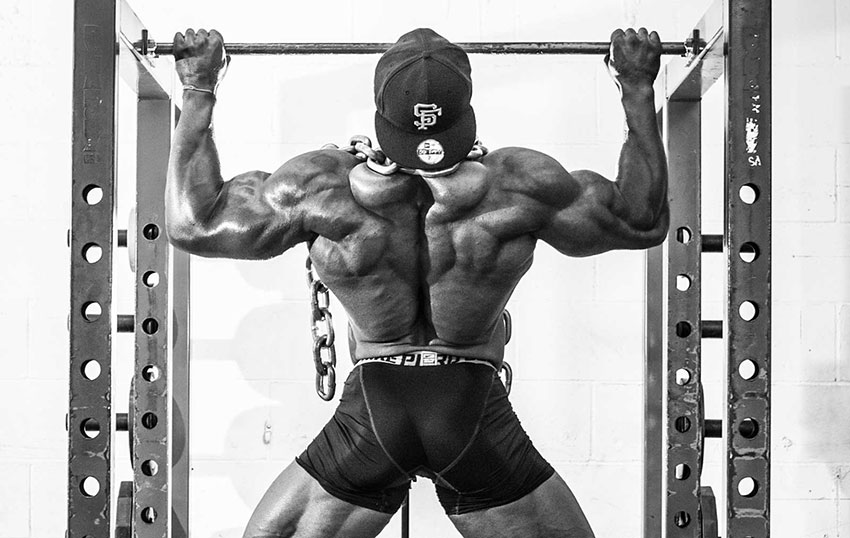 What we can learn from Gerald Williams

Gerald’s sporting background allowed him to quickly succeed in bodybuilding. He decided to place emphasis on his bodybuilding career – leaving his soccer and American football playing days behind.

However, Gerald lived by the message that it is important to have a fallback option if things didn’t work out in his bodybuilding career. Gerald achieved this – becoming successful outside of bodybuilding. He built a real estate business, alongside becoming an adjunct professor of Psychology.

Gerald learned to place negativity in the past, overcoming the deaths of his family members. By doing so, he was able to move on with his life.

What we can learn from Gerald Williams is that you may already possess the necessary traits in order to succeed in fitness. But having someone there to guide you when things aren’t quite going right will set you up to achieve great things.

How are you doing today do you remember Marc Lewis Anthony