Ohio-based Evan Johnson has gone from being an underweight 118lbs soccer player to becoming a fitness icon on the rise.

He loved to play sports from an early age, but found himself frustrated by being one of the skinniest soccer players on the team. This led him to pick up the dumbbells and transform his life forever.

Over the years of training and ‘eating to grow,’ Evan’s exploded in his physique but also career. He’s now a fitness influencer that sets new standards not only for himself but also for those that follow him online.

With his discipline and commitment to the fitness lifestyle, Evan shows no signs of stopping. His story, training principles, nutrition insights, and more can all be seen below. 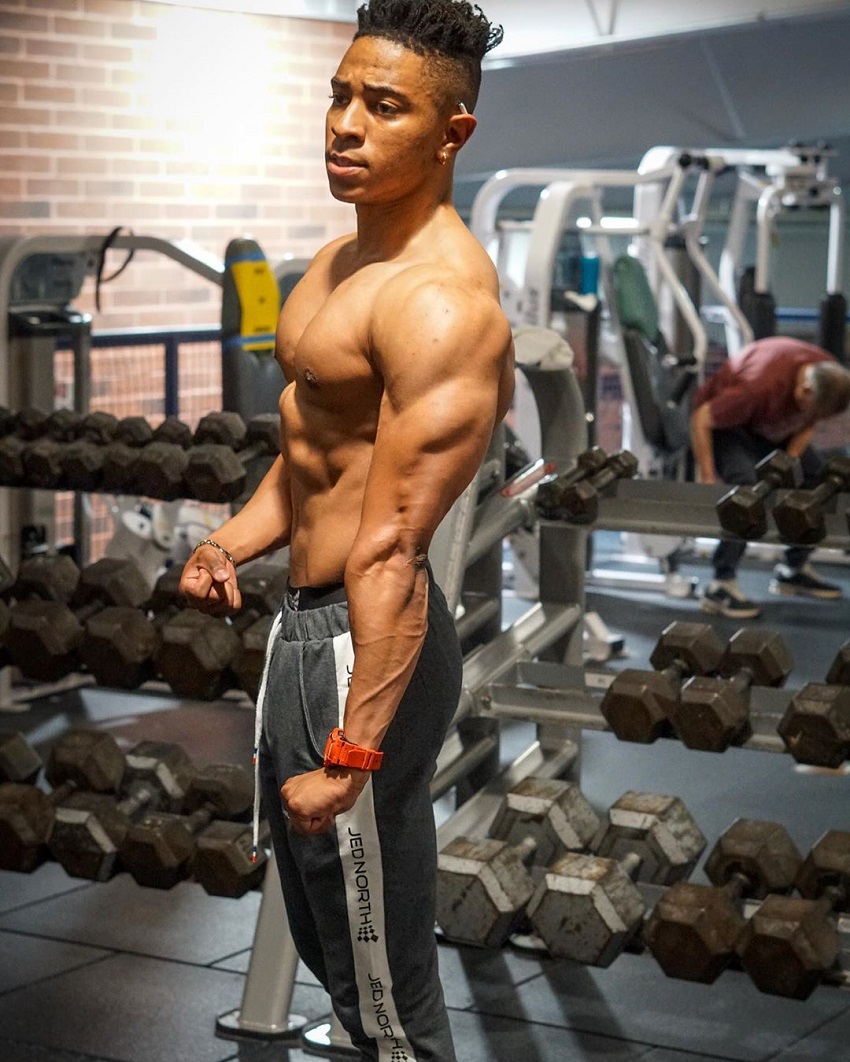 “I definitely think that nowadays my fitness goals are more so focused on longevity. Living as long as possible and feeling healthy for the rest of your life should always be the goal!

Anyone can take some performance enhancers to get ridiculous strong or massive but if you aren’t actually healthy, feeling good and looking good was it actually worth it?” 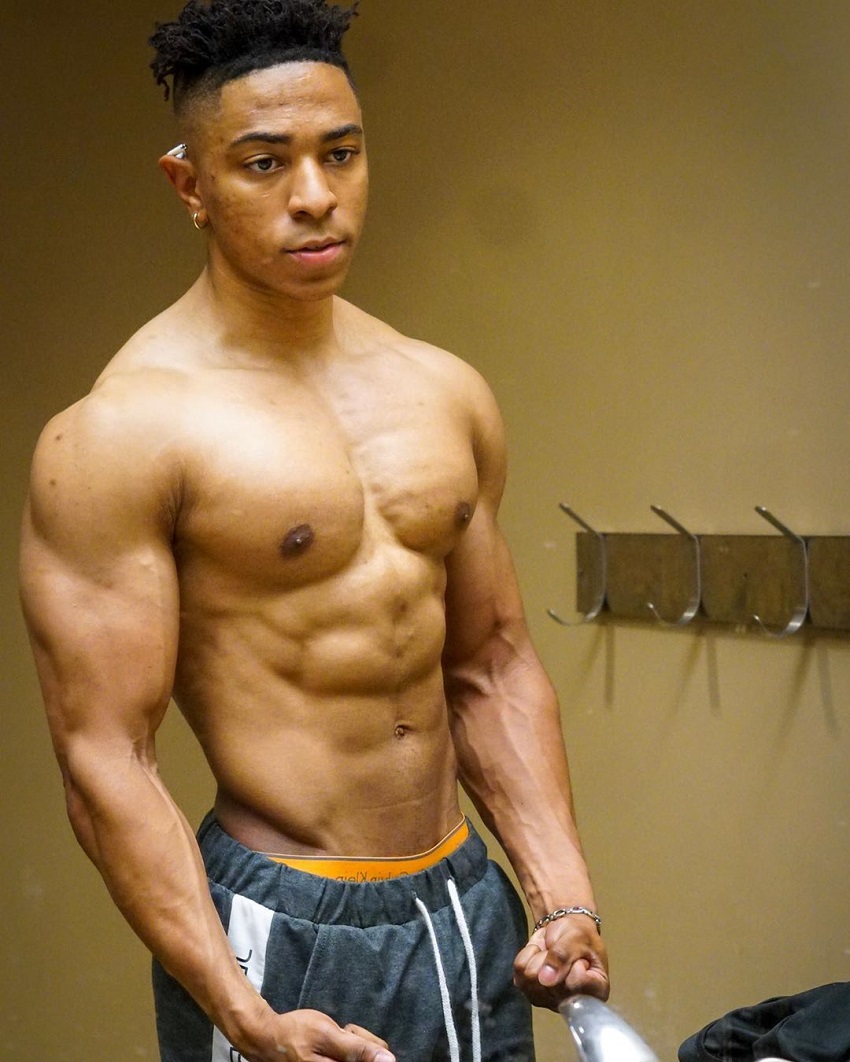 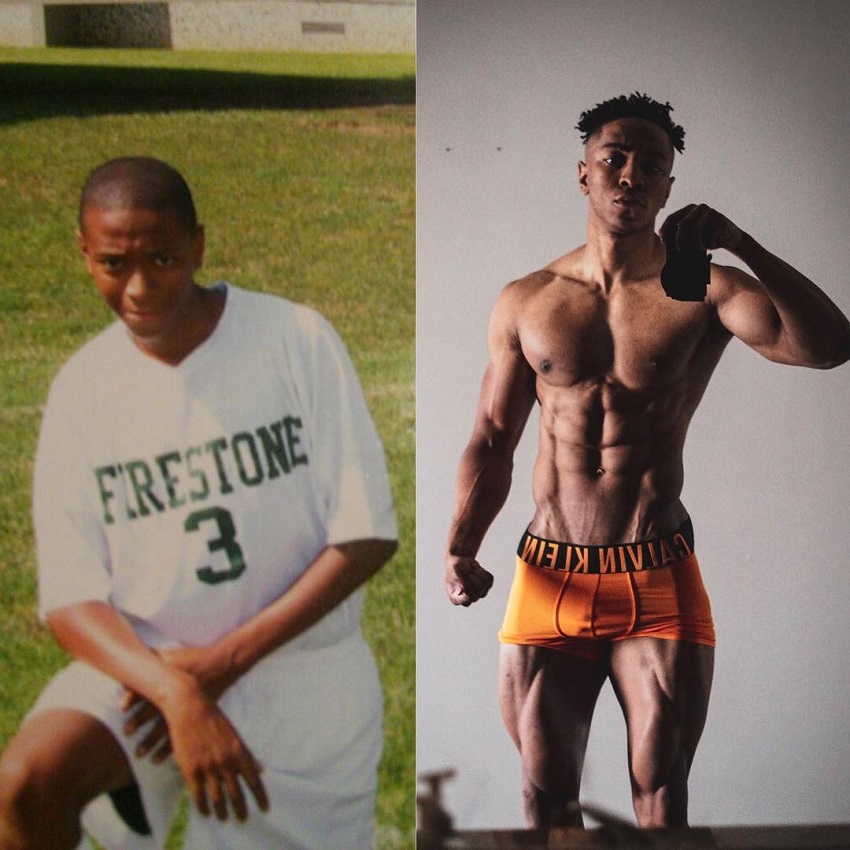 Evan Johnson is a 2-time Men’s Physique Competitor. He’s been training in the gym since 2012. From the very beginning of his fitness journey, Evan has always strived to be the best version of himself. Not just physically but mentally and emotionally as well.

Growing up, Evan was born into sports because his mother was an athletic director for his local schools. Which prompted Evan to follow in her footsteps. He loved to play soccer and was one of the best in his team. The problem was, however, that Evan was 5’7” and weighing only 110lbs, which made him frustrated.

After he finished high school, he decided to do something about his weight problem – joining a gym and leaving soccer behind. It was a difficult decision for Evan, but he decided he had enough of “looking skinny,” in his words.

After he started training in the gym, Evan instantly became addicted to the changes he saw in his body. He soon realized this was the lifestyle that he wanted to live.

As the years went by Evan formed relationships with friends and other like-minded people in his fitness circles. After years of training and enjoying his new passion, Evan got the opportunity to work with a renowned supplement company. Ultimately, it was this that built Evan the platform from which he’d launched his career as a fitness influencer.

Evan’s hard work in the gym has given him more than he’d ever initially hoped for. Not only did he get into the best shape of his life but also now helps others do the same.

As Evan says, “I’m very fortunate and grateful for all the opportunities that have presented themselves in my life!” 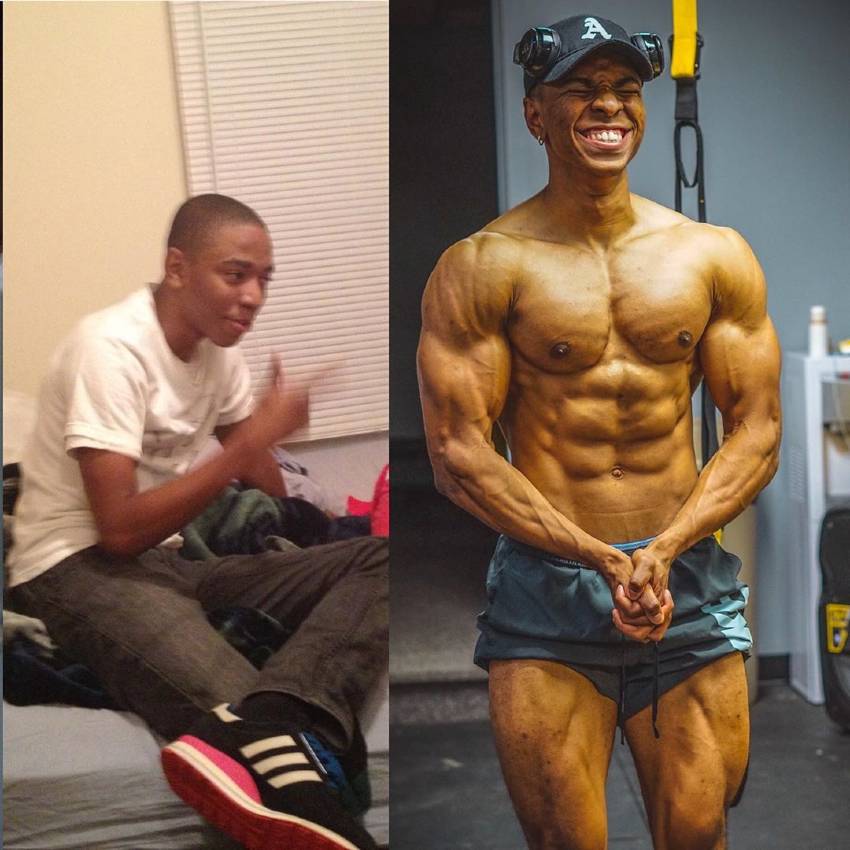 “Leg press can be a huge help when it’s comes to building bigger quads! A lot of people always like to keep their feet high when using the leg press but if you’re looking to emphasize the quad keep the feet low!”

Specifically, Evan likes to do 3-5 sets per exercise and up to 30 sets per workout. While this amount of training volume may be too high for some, it’s worked well for Evan. He started his fitness journey as a ‘skinny’ high school student, but packed on muscle quickly by using these methods.

In terms of exercises, the simpler the better for Evan. He sticks to basics compound movements such as squats, the deadlift, and the bench press which build the basis of his physique. For shaping and refining specific areas of his physique, he’ll do isolation exercises.

Evan’s philosophy is that you can never train too much chest. When he first started training, he’d noticed his arms and shoulders grow but his chest was slow to catch up. Over the years, he’s tried different training techniques that have helped him sculpt his chiseled pecs.

He almost always starts his chest training with the bench press but makes sure to include the incline and decline variations too.

Here’s one of his favorite quick chest workouts:

For Evan, gaining lean muscle wasn’t easy. He says it took balancing between the correct nutritional requirements for his body, and the most effective training routine that pushed his physique to its potential. As a college student, Evan found it hard to gain lean muscle with the little time he had to train, the food he was eating, and the workouts he was doing. But through sheer discipline and resourcefulness, he made his goals into reality. 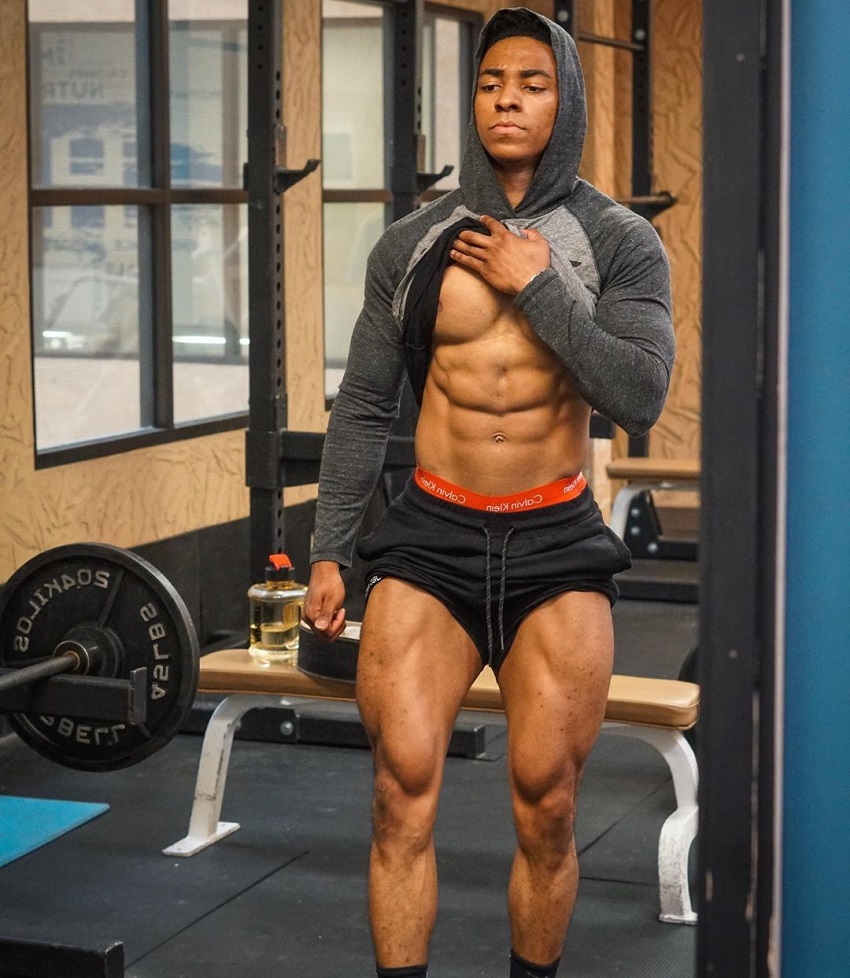 Back when Evan first delved into fitness, his main issue was being unable to put on weight. In order to fix this problem, he had to increase his calories – particularly those coming from protein.

As protein is the main muscle-building nutrient, it helped him stay lean while growing the foundations of his physique. Adding carbs and fats to the mix allowed Evan to have stronger and fuller muscles from his training.

Fast forward to today, Evan still sticks to the same diet principles from before; ‘eating to grow’.

He eats foods such as chicken breast, yams, salads, and avocados, as well as some fish once in a while.

On a rare occasion when he wants to cut body fat, Evan will reduce his calories to around 500 below maintenance. He’ll also increase his protein intake at the same time to prevent muscle loss from the lack of calories.

Evan’s supplements might include pre-workouts and occasionally, fat burners. Pre-workouts can be of great help for athletes like Evan, as they help him stay zoned in on his training. Fat burners, on the other hand, are often utilized by fitness models like Evan when they end their bulk and want to make their weight loss a smoother process. 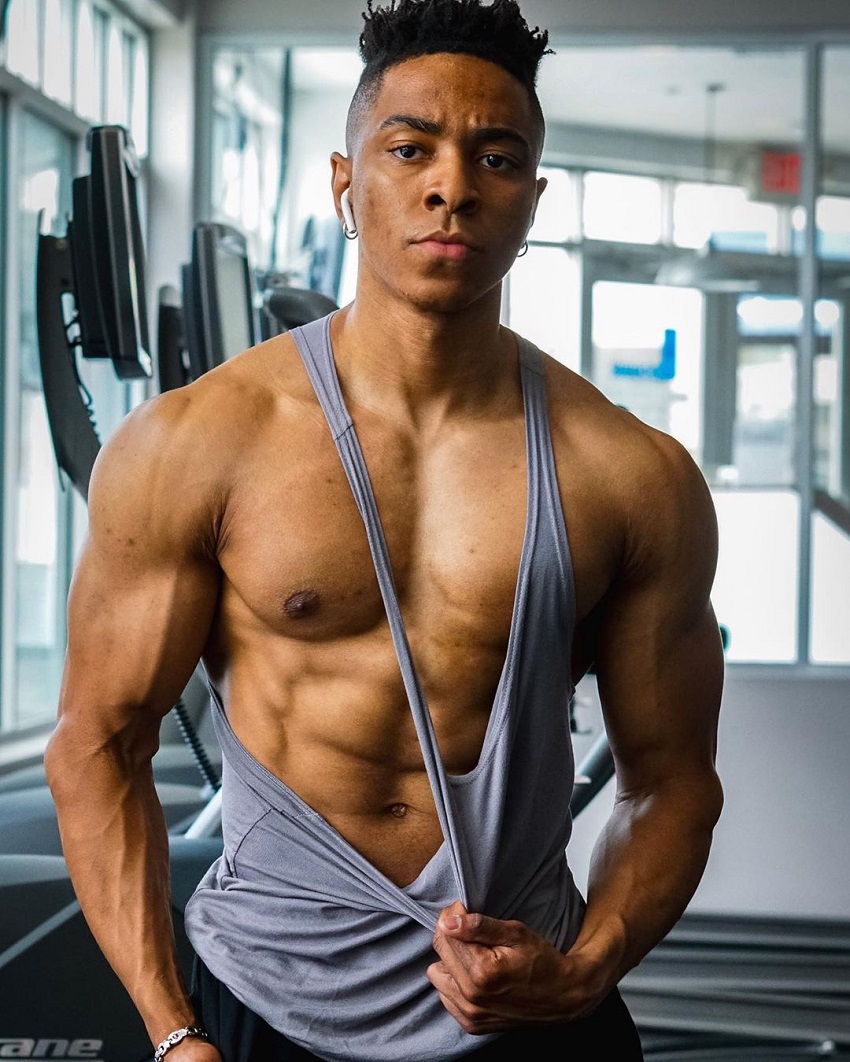 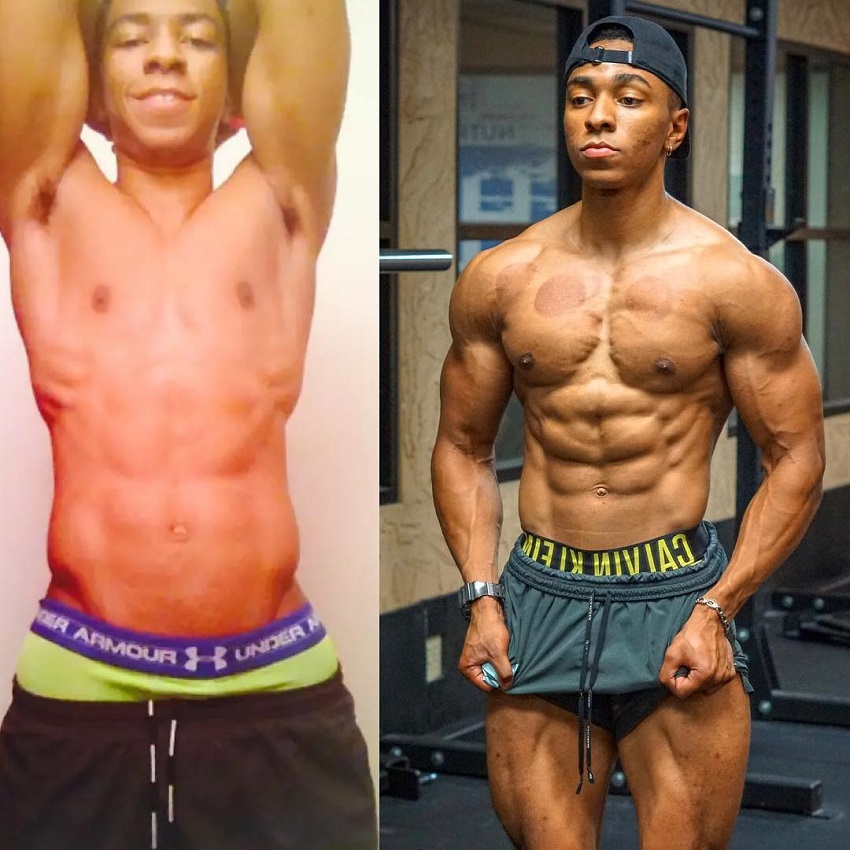 “My motivation is to be the best version of myself. At the end of the day always try to ask yourself “what did you do today to be better?” You should always be doing something to be a better version of yourself never be satisfied with mediocrity.”

What we can learn from Evan Johnson

Evan Johnson has shown us that it doesn’t matter where you start on your fitness journey. As long as you have a vision and discipline, you can transform your body.

Evan started out in fitness as a 118lbs, 18-year old high school student. With the right training routine and diet plan in place, he transformed himself from the ground-up. His physique grew and so did his career.

If you’re in need of motivation to kickstart your fitness journey, what better story to read than Evan Johnson’s. It could be the very ‘spark’ you need to start your own transformation.