Dylan Thomas is a Canadian elite bodybuilding coach, fitness model, and lifestyle transformation specialist. Dylan has received a lot of admiration online for his ‘no-quitting’ attitude and ‘hardcore’ workouts in the gym. He’s also known for his ripped and chiseled body, boasting vascular arms and popping abs.

However, this wasn’t how Dylan’s life always looked. In fact, he was all but strong and muscular when he started his bodybuilding journey at the age of 16.

Entering the gym for the first time, Dylan was overwhelmed with the sight of huge bodybuilders and workout equipment. But before long, the weight room became his “second home.”

In a matter of months, Dylan transformed his physique from skinny to muscular, all while keeping low body fat. Training hard became a part of him. He continued achieving small, but consistent victories and has since reached massive heights in his career of a fitness athlete and coach. 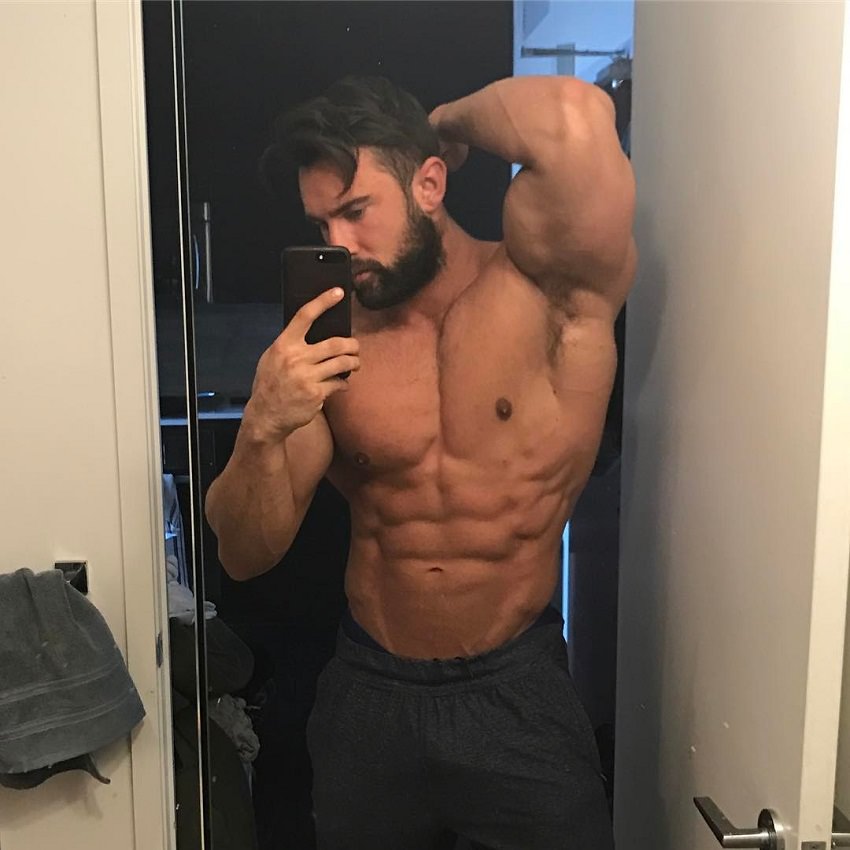 “My goal is to “inspire the uninspired” to lead an active, healthy and fit lifestyle.” 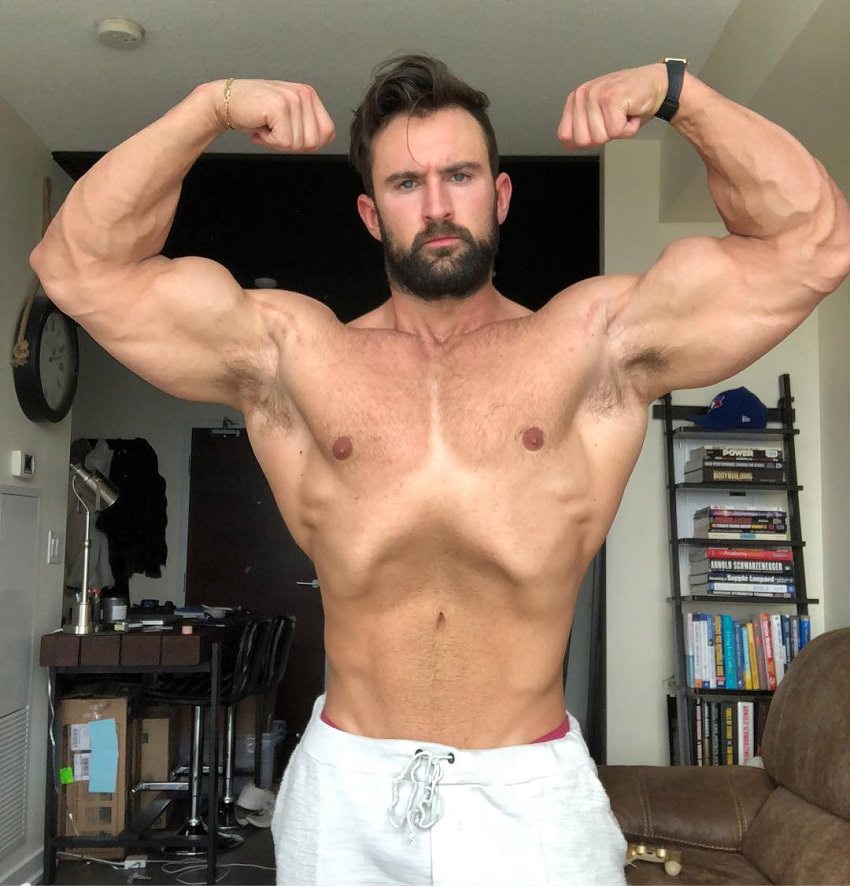 “When I go into the gym to train legs, I aim to create a drive within myself to push to points I’ve never gone before. To the average person it may even be viewed as a form of self-abuse, but it’s abuse I embrace and take pleasure from. 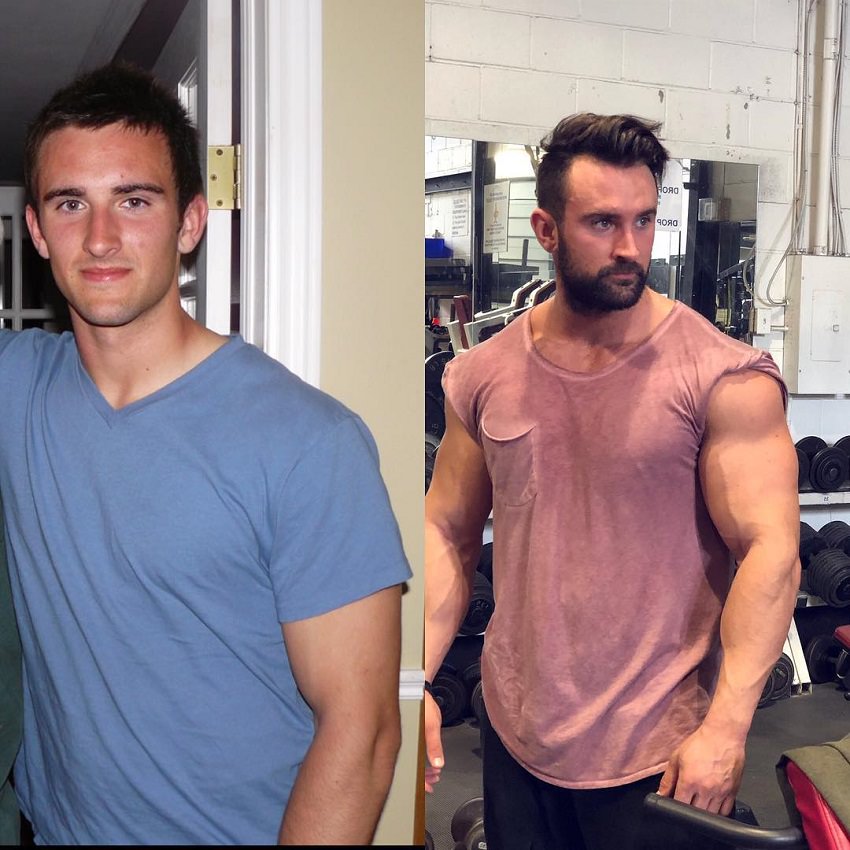 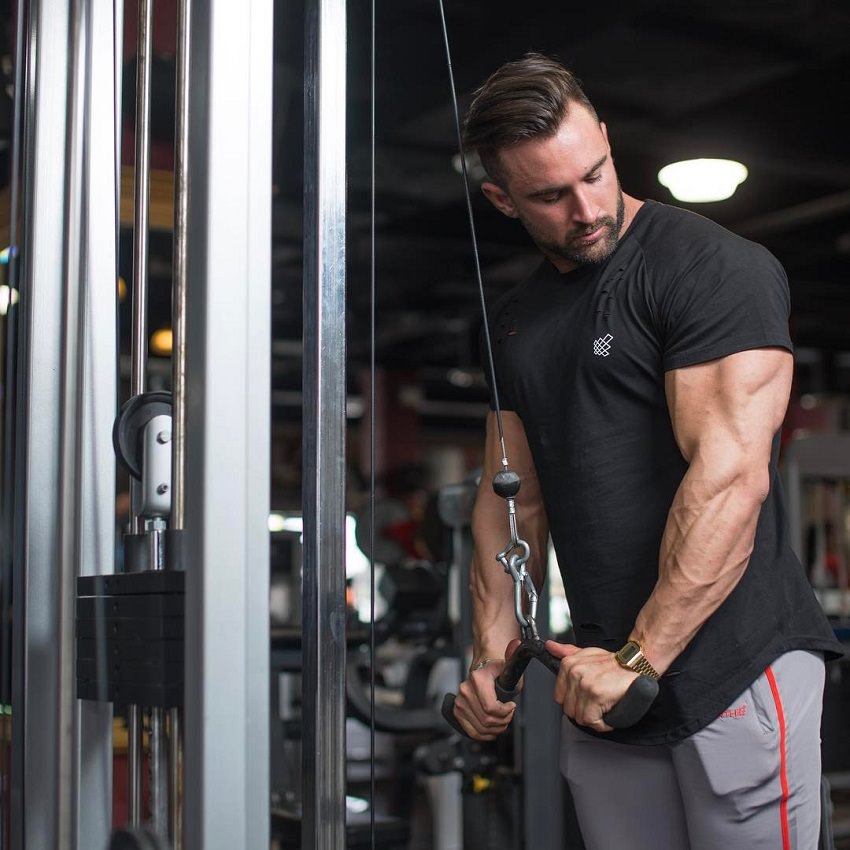 “You should aim to continue to lift the same amount of weight for as long as possible the deeper you get into a cutting phase in order to preserve your hard earned muscle.”

Dylan’s training routine has changed a lot over the years.

When he first started, he didn’t lift heavy. Instead, Dylan focused on getting his form right to learn the ropes of training as well as to avoid injuries.

Through his progression in training, Dylan began to lift heavier and heavier. These days, he’s able to achieve impressive lifts, particularly in the barbell squat. He often shares his feats in the gym through online videos.

However, among all the training ‘insanity,’ Dylan has never forgotten the importance of his form. This was and has always been his number one priority in the gym.

Dylan’s Week of Working Out

Dylan typically trains five times per week when preparing for a contest. These days are dedicated to strength training, meaning his focus lies on lifting heavy weights and keeping his muscles strong.

The remaining two days of the week are dedicated to Dylan’s conditioning. This is where he does a lot of HIIT sessions. With intense forms of cardio such as HIIT, Dylan is able to keep his metabolism burning even after he finishes his workout.

When he’s not competing, Dylan will tone it down in terms of cardio. But, his strength workouts will stay just as intense as during the comp prep. In fact, he often trains even harder during the ‘off-season’ in order to pack additional slabs of muscle on his physique. 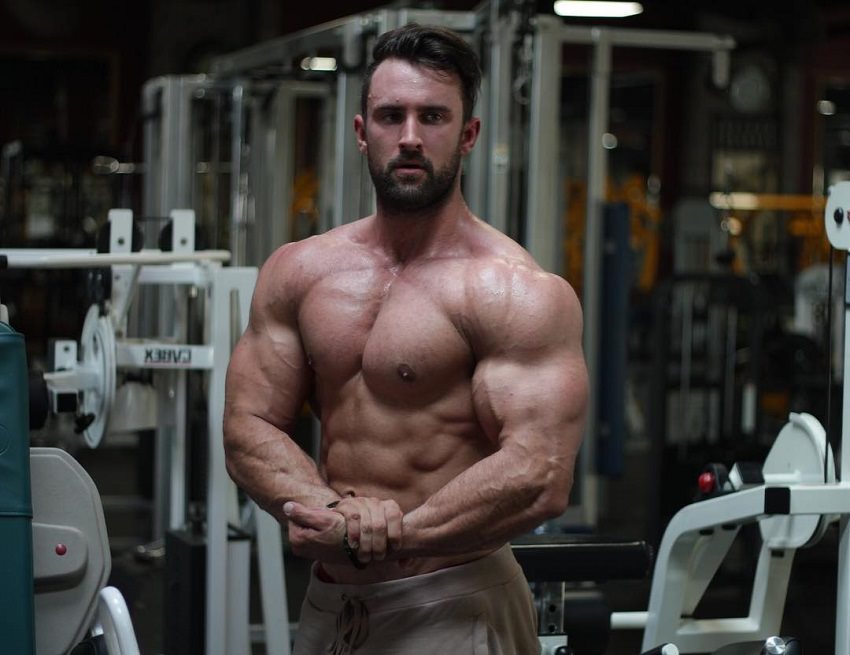 Just like with any other body part, Dylan uses a variety of exercises to target every fiber and thread of his pectoralis.

He likes to start his chest workouts with an incline exercise, such as the bench press at a 45-60 degree angle. This mainly targets his upper chest area.

From there, Dylan gradually transitions to middle and lower-pec exercises, ensuring he hits all parts of his chest equally.

“I like to use this workout to cut down for a photo shoot or for contest prep.” 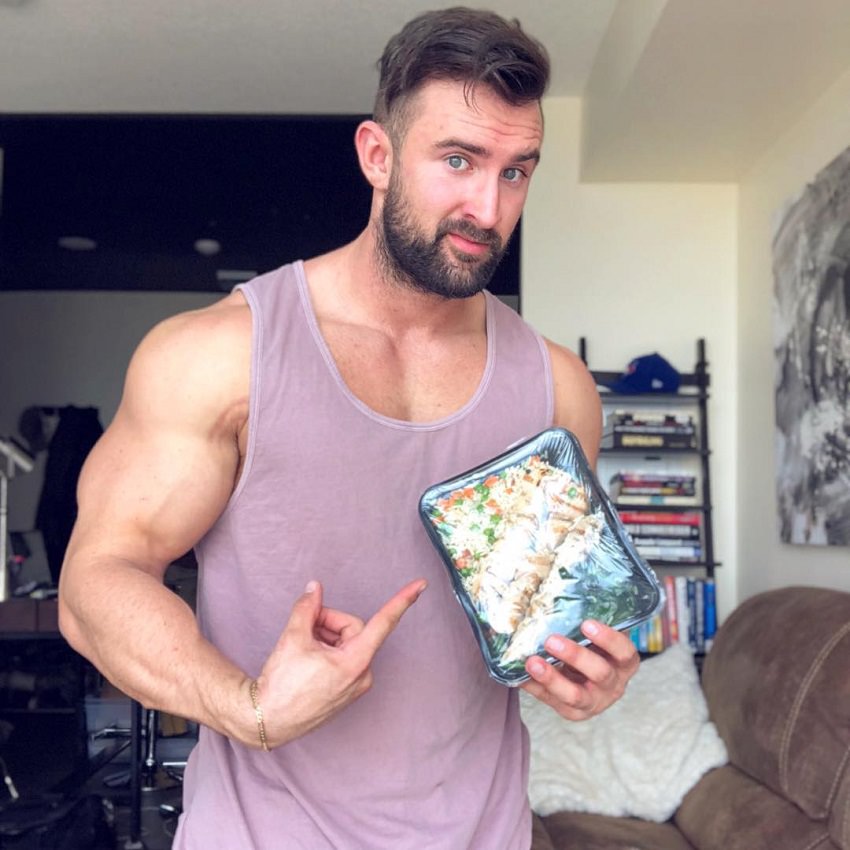 Here what Dylan believes are the most common biceps-building mistakes;

Mistake #1 Lifting Too Much Weight

Dylan says, it’s tempting to aim at impressing others with the amount of weight lifted. Especially when doing biceps curls on an Olympic bar.

However, lifting so much weight requires a tremendous amount of momentum through the knees and hips to lift the bar upward, according to Dylan. This results in biceps getting less work.

For this reason, Dylan doesn’t like to go heavy in his biceps workouts. Instead, he aims at doing a high number of reps to achieve the infamous burning sensation in the muscle.

As Dylan says; “Biceps is a small body part by comparison to other muscles, and it responds much more to a good pump than it does to sheer brute overload.” – Dylan Thomas

Mistake #2 Giving Up When It Gets Tough

In order to fully stimulate his biceps, Dylan Thomas doesn’t go for failure every set. But he does get to that point at least two or three times during his workout.

As his biceps become engorged with blood, the reps start to feel more painful. This, Dylan says, is where most people give up. But this is precisely the point where he pushes past the pain and goes further. “This is where progress is made,” says Dylan.

Mistake #3 Sticking To The Same Exercises Over And Over

Although Dylan has a few basic movements that he incorporates into almost every biceps workout, he constantly tweaks and adjusts his arm position to hit the muscle from different angles. This way he keeps the body guessing.

Dylan believes that, if he were to do a biceps exercise the same way over and over, the muscle would eventually stop responding as well as it used to. 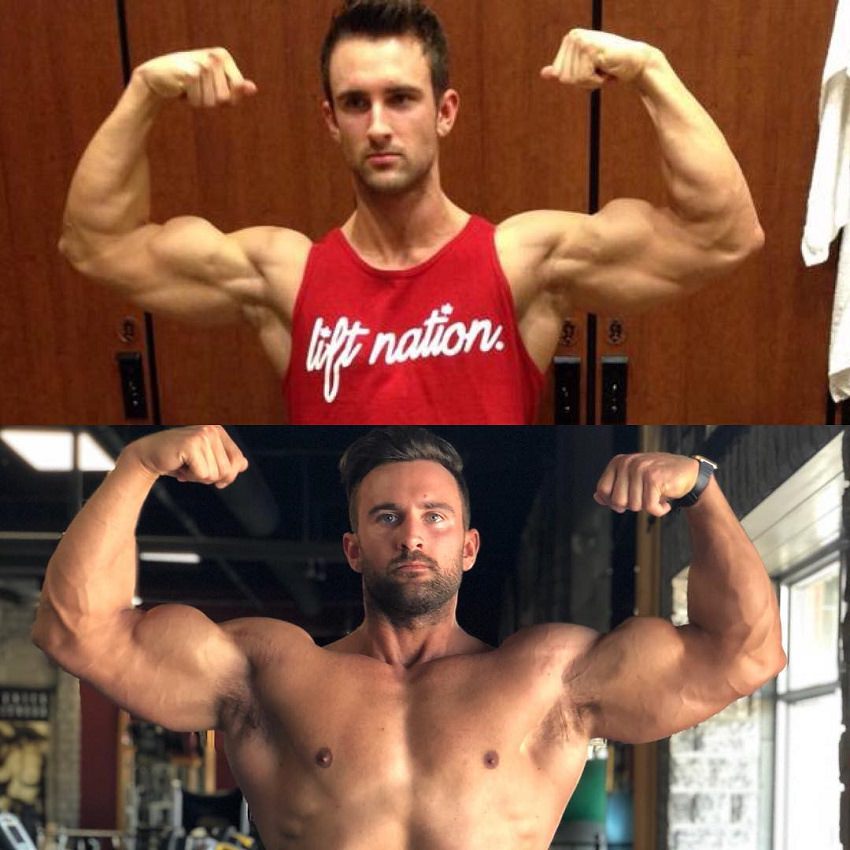 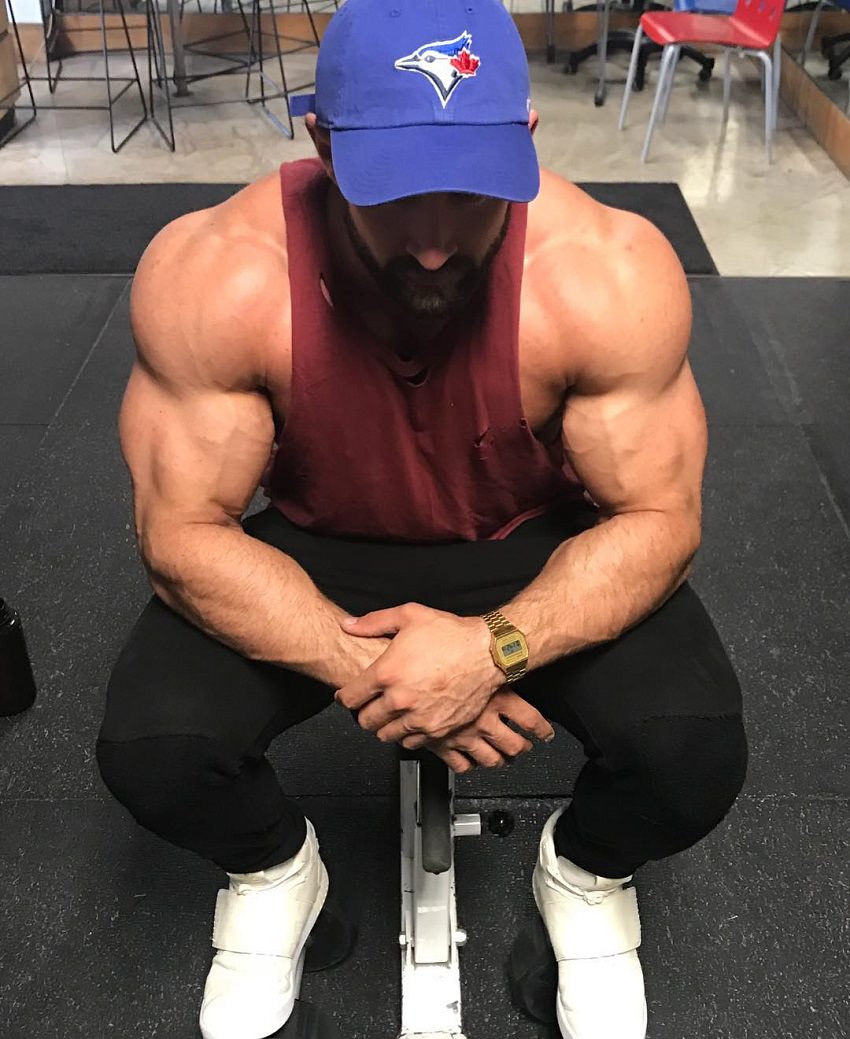 “You’d generally be better off having 1 drink over 7 nights vs having 2-3 drinks 3-4 nights per week. So in one sense, you could get away with drinking more frequently if your portion control is more restricted vs having a larger portion more infrequently.”

Dylan Thomas says his diet changes from day to day, so it’s hard to say what his exact macros are. But generally, the numbers look something like this;

When he wants to lose fat quickly, Dylan likes to do so-called ‘re-feed days’. Two or three days in a row, he won’t consume almost any carbs. Then, on the third or fourth day, he’ll introduce massive amounts of complex carbohydrates, fueling his muscles with glycogen. This results in Dylan’s muscles looking both full and ripped at the same time. 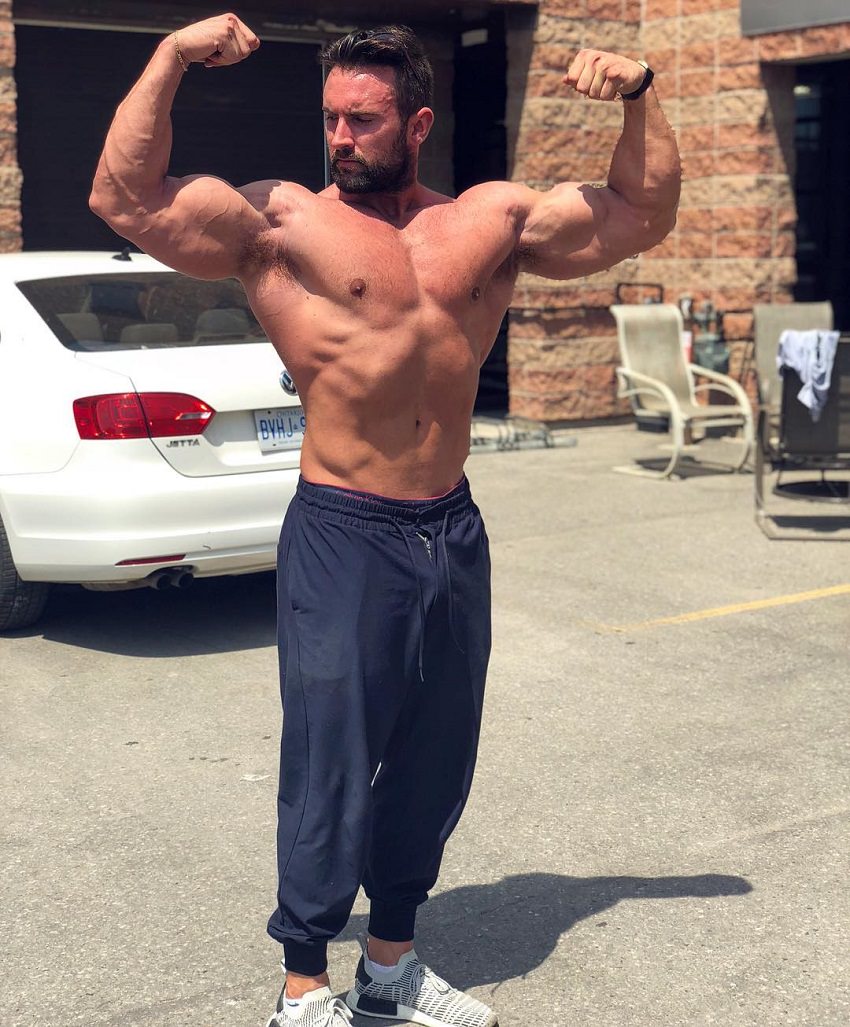 What we can learn from Dylan Thomas

If you’re looking to get big and aren’t afraid to go a little harder in the gym, then Dylan Thomas is the athlete you should follow. His workouts are intense and heavy, forcing the muscles to become stronger.

Dylan is also extra-attentive with his diet, making sure to supply his body with adequate amounts of calories to make it grow. There’s no growth without the fuel.

Dylan’s lifestyle of training hard and eating clean is the route to go if you’re looking to get ripped and swole. Who knows, maybe you too could build your very own greatest physique with enough effort and patience.

Hie bro, I like your work outs and you encourage me to push to my maximum limits, and the good put is that I see you promoting muscle tech, since I started using the products I am hungry for any weights.