Denny Gable was a bodybuilder and actor from the late 70’s. During his time in Venice, Denny trained with the likes of Arnold Schwarzenegger, Franco Columbo, and Robby Robinson. He also appeared in bodybuilding magazines and movies while he lived in California.

Growing up in Cedar Rapids, Iowa, Denny was a highly skilled gymnast as a youngster. During his 10-year long career in gymnastics, Denny won the title of Iowa State Champion on three different occasions.

After his graduation, Denny decided to move to California to become a bodybuilder. Upon his arrival in Venice, Denny weighted 83 kilograms at 180 cm tall. After a few years of rigorous weight training, he reached his peak of 95 kilograms; having 130cm chest, and 49 cm biceps.

Denny died on July 22nd, 2000 in Cedar Rapids as a result of heart attack. He stays remembered as one of the leaders of the late 70’s community of bodybuilders in Venice, California. 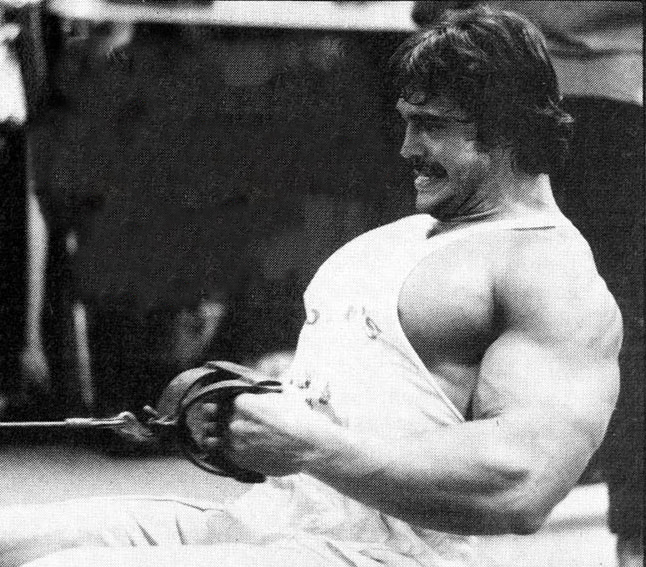 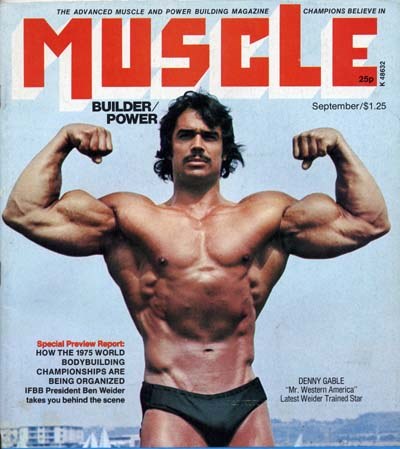 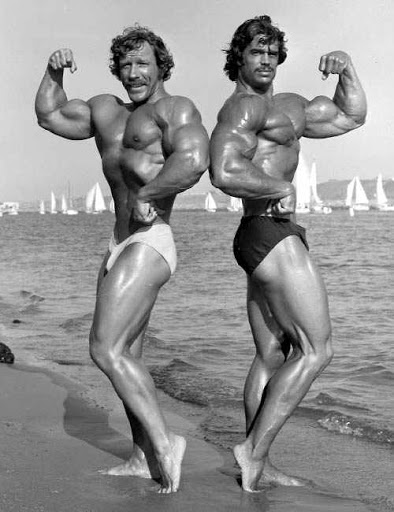 Kent Kuehn on the left, flexing with Denny Gable on the right.

Denny Gable was born and raised in Cedar Rapids, Iowa. As a youngster, Denny was interested in gymnastics, a discipline which he practiced for over 10 years. During this period, he earned numerous accolades in gymnastics, such as being a three-time gymnast champion of the Iowa state.

However, one day, Denny got his hands on a bodybuilding magazine. The physiques he saw in the magazine fascinated him. So much so, Denny decided to leave gymnastics behind, and become a bodybuilder.

Denny didn’t waste much time to start acting out on his goal. Immediately after graduation, he packed his bags and moved to California, where he met Arnold and other iconic bodybuilders. They all started training in the gym together and formed strong bonds.

Over time, Denny became a well-known bodybuilder in Venice, alongside his training partner Robby Robinson. The two went on to appear in Joe Weider’s training articles where they explained their training methods and principles.

Unfortunately, Denny left his friends, family, and bodybuilding fans before his time. He died on July 22nd, 2000, at the age of 49. The cause of his death was a pulmonary embolism.

Denny stays remembered for his appearances in bodybuilding magazines and movies. As well as his influence on the 70’s bodybuilding community in Venice, California. 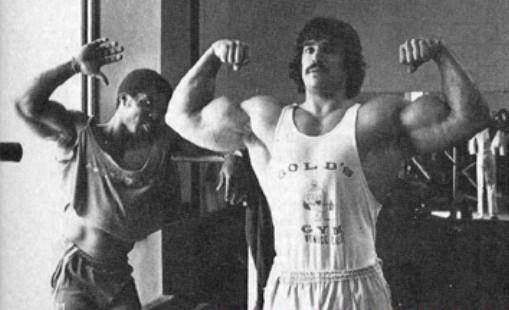 Denny Gable flexing his biceps with Robby Robinson in the background.

Denny’s number one priority in every exercise was to keep a strict form. When it came to his delt and biceps training, he kept his arms as straight as possible; doing slow and controlled movements.

He did five sets of each exercise, sticking to the 6-8 rep range for his shoulders, and 10-12 for his biceps.

When it came to adding mass to his triceps, Denny’s favorite exercises were seated and decline extensions. He followed strict form, just like with any other exercise, and made sure not to over-do it with heavy weights as these exercises are known for being hard on the joints.

To push his training even further, Denny incorporated Joe Weider’s training methods like forced reps, and the muscle confusion principle.

For forearms, Denny did a lot of supersets and low rest-periods. This ensured maximum results in the shortest space of time possible.

Although Denny placed a great importance on mixing things up with his training, one thing almost never changed – beginning his chest workouts with the bench press.

If he had to pick only one exercise for chest, Denny always said it would be the bench press. It was the exercise which helped him sculpt a well-rounded and massive chest, as well as increasing his overall strength in the gym.

For his upper chest, Denny did a lot of incline presses. They helped him add mass onto his upper pectoralis area, while exercises like incline dumbbell flyes were used as finishers for his chest workouts.

Sometimes, instead of flyes, Denny would use bodyweight dips as his chest finishers. He believed they helped him add mass and roundness to his outer-chest area.

Denny’s back workout consisted of countless sets of pull-ups, seated cable rows, and T-bar rows. These were his ‘go-to’ exercises when it came to adding mass to his lats.

If he wanted to target his inner back muscles, he would do a lot of narrow-grip lateral pull downs, and t-bar rows. Whereas, if Denny wanted to increase the width of his back, he would stick to wide-grip pull-ups. 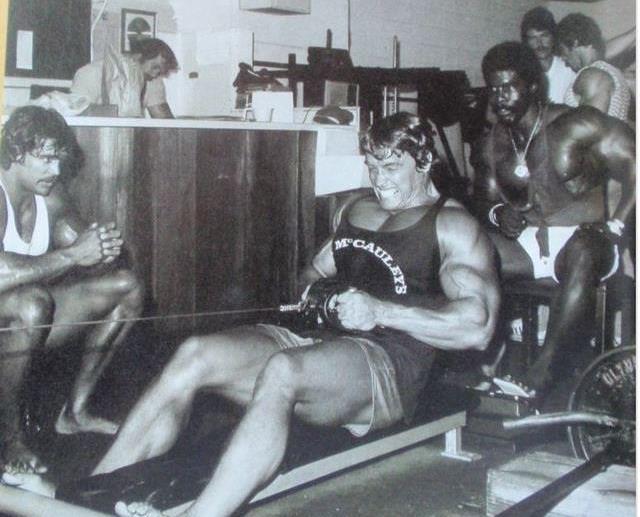 Denny ate a typical 70’s bodybuilder’s diet, which was based on high-protein and low-carb foods. Denny, like other bodybuilders of his era, didn’t eat food for the taste, but for the results in the gym.

Supplements were scarce during this period, so bodybuilders like Denny had to rely on solid, whole foods. He would eat a lot of egg whites, chicken, beef, fish, and milk to meet his daily protein requirement, which was sometimes as high as 250 grams. 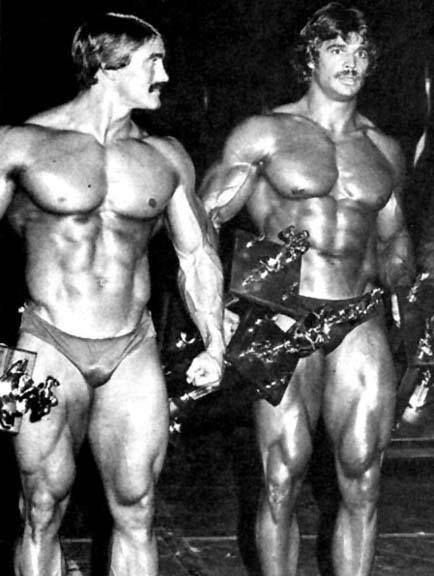 Denny’s training was influenced by some of Joe Weider’s training principles, which he utilized to get the most of his workouts.

Other influences on Denny’s bodybuilding journey included Arnold Schwarzenegger and Robby Robinson, with whom he worked for Weider’s training articles. 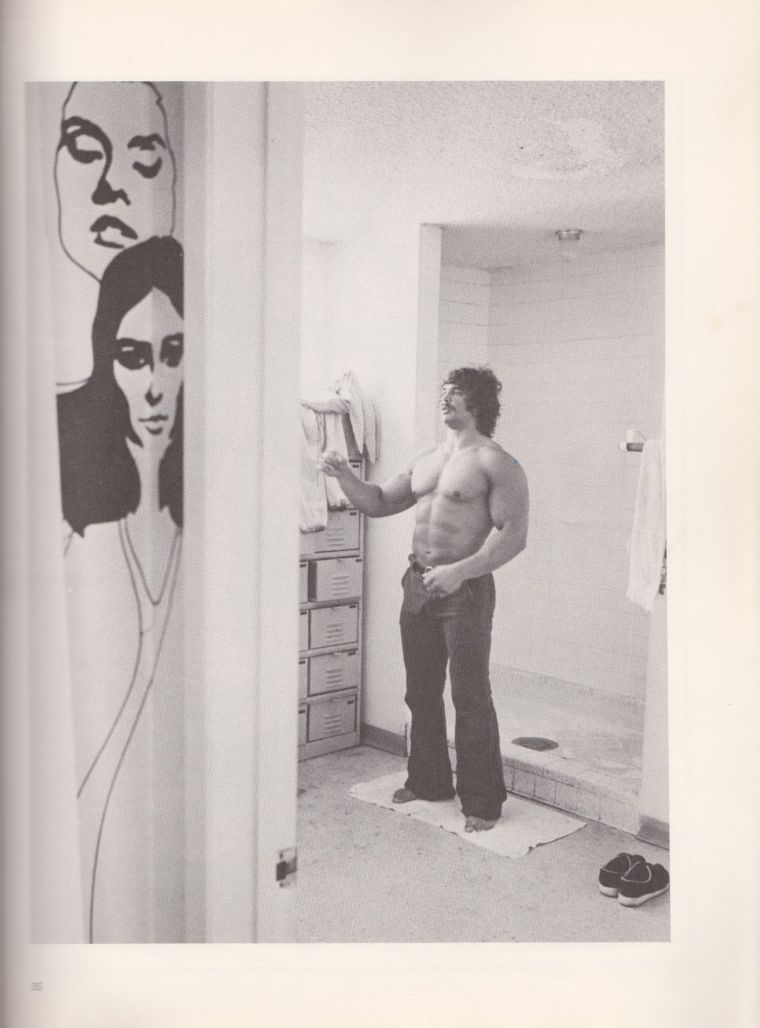 What we can learn from Denny Gable

Denny Gable moved from Iowa to California in his pursuit of becoming a bodybuilder. He already had a successful career in gymnastics, but it was bodybuilding that he ultimately chose.

It was a bold move, but it paid off for Denny. He built an awesome physique, and became one of the icons of the 70’s era of bodybuilding.

What Denny has shown us, is that a little courage and determination can go a long way. If you have a passion for something, don’t waste too much time thinking about it.

Instead, take the ‘leap of faith’ and go after what you want in life. That’s one of the ways you can manifest your dreams into reality – just like Denny Gable.

I never knew Denny, I met him and spoke briefly at a club called, the Sun Spot in Pacific Palisades, Ca on the coast and PCH. He was at the club one night and witnessed me defending myself (as a bouncer) from an irate patron who attacked me. I subdued the patron with a left-right combination in which the patron went down. Denny came over to me and said, that was a classic one-two combination. I saw him around Venice as I lived there one block from Muscle Beach. I trained at Gold’s Gym, Venice from 1982- 1992.

The last image is of Roger Callard, not Denny Gable. Otherwise, nice write-up about one of the less well-known bodybuilders of the ’70s and ’80s.

Thanks for letting us know, Matty. Glad you like the article!

I searched directly to read about Denny Gable, and enjoyed the reading and history here. Thank you very much. I just finished watching “Pumping Iron” (presently it is free On Demand through Redbox). It was great thinking back upon that era, remembering when I first heard of “Pumping Iron” (a great documentary before and during its time). I was in elementary/high school then. It had just recently come out, and was a point of discussion among us teenage boys. Seeing the changes through the years, especially with Arnold and Lou – and Hollywood and Bodybuilding History.
The reflections on Venice Beach were good to read, including the “family” of bodybuilders. I was so sorry to hear that Denny passed away so young, already in 2000. Gables are more famous than just vertical triangular ends of a house or building, and Denny proves it, along with Clark and Dan, and perhaps, me as well. Who knows, maybe we Gables are all related.
Again, thank you.
Blessings,
Robert Gable