Dave Draper is a legend from the Golden Era. He was instrumental in popularizing the sport, helping bodybuilding move into the spotlight.

He started training before he was 10, but he wasn’t always aware of his potential in the fitness industry. He worked as a welder in a New Jersey factory during his youth. 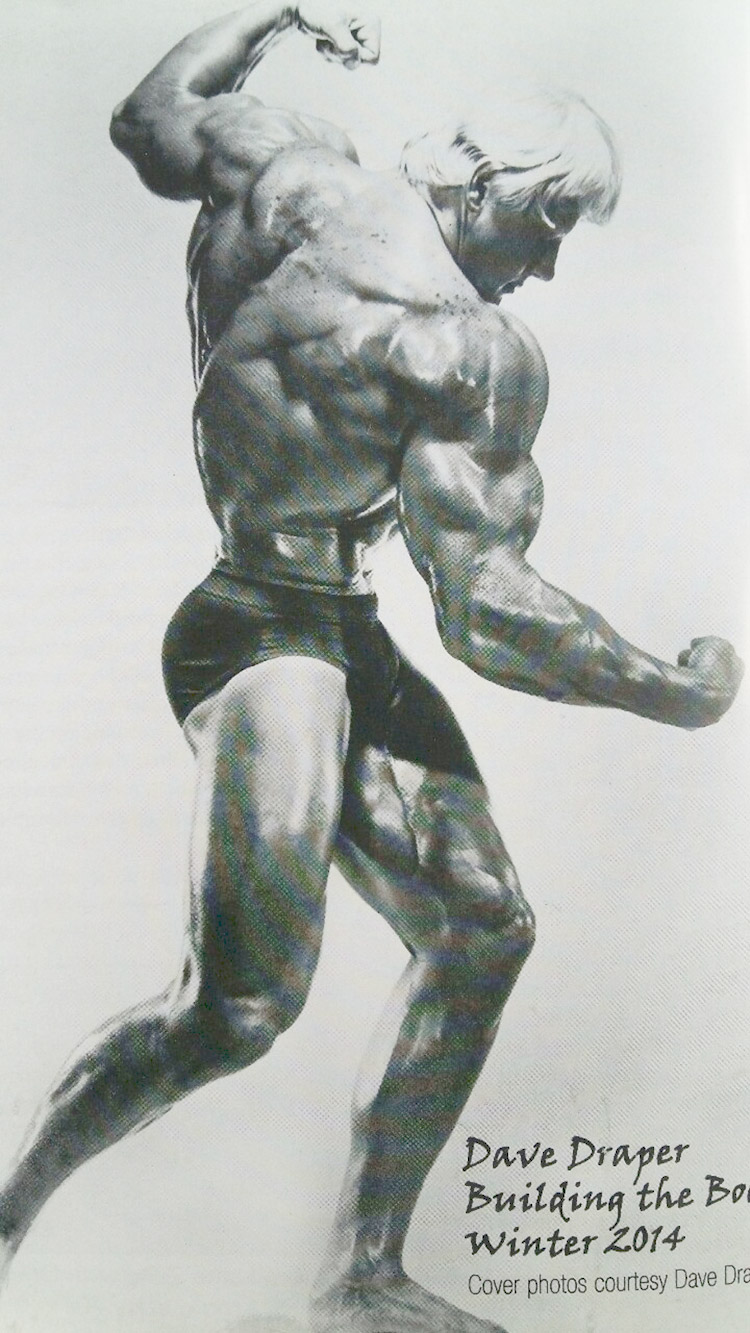 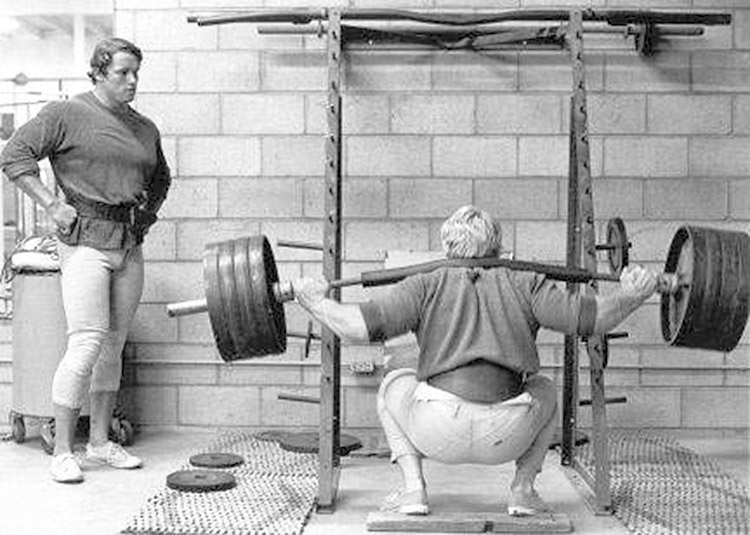 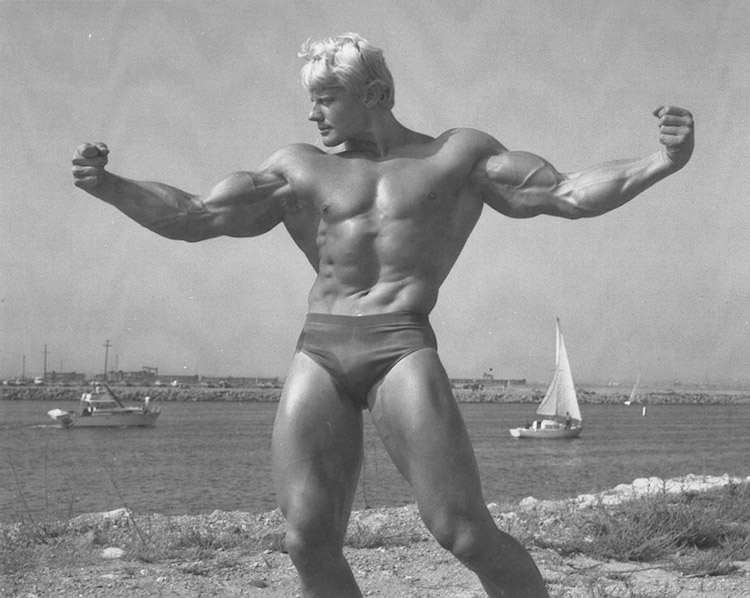 Born and raised in New Jersey, The Blond Bomber always had a passion for fitness growing up. He began training, performing dipping and push-ups before he reached the age of 10.

He kept a small set of weights under his bed – the more he aged, the more the set increased.

He found his back widening, and he made serious progress to his physique by 12-years-old, in 1954.

By the age of 15, in 1957, Dave had grown massive for his age. Strangers began acknowledging his size, asking about his training.

At this point, he became proficient in wrestling, swimming, and gymnastics during high school. However, Dave hadn’t considered a career as a bodybuilder. 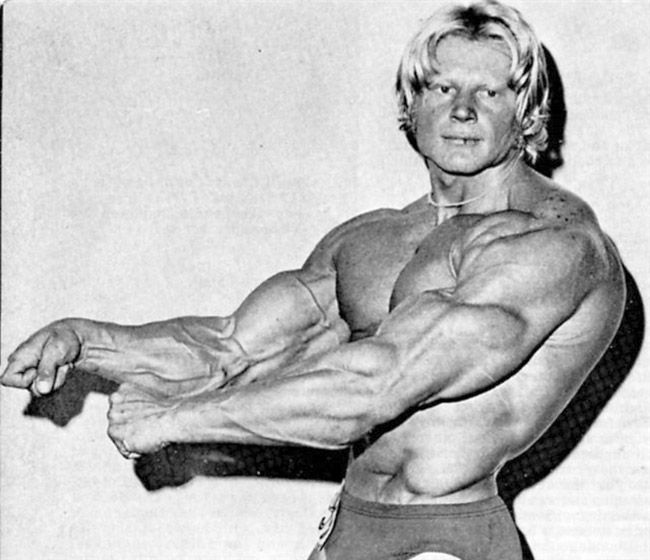 With the encouragement of his family and friends, Dave entered his first competition in 1963 – the Mr. Jersey contest. At the age of 21, he walked away with the trophy in his debut.

It was at this point that he began to realize his potential to succeed in the industry.

After graduating, Dave became a welder in a factory. However his passion for fitness was still strong – he ordered a new pair of 45-pound plates from the Weider Barbell Company.

As he collected his purchase, he bumped into the owner, Joe Weider. He impressed Joe with his huge physique and was offered a job in Santa Monica.

6 weeks later, Dave made the big decision to move to California. 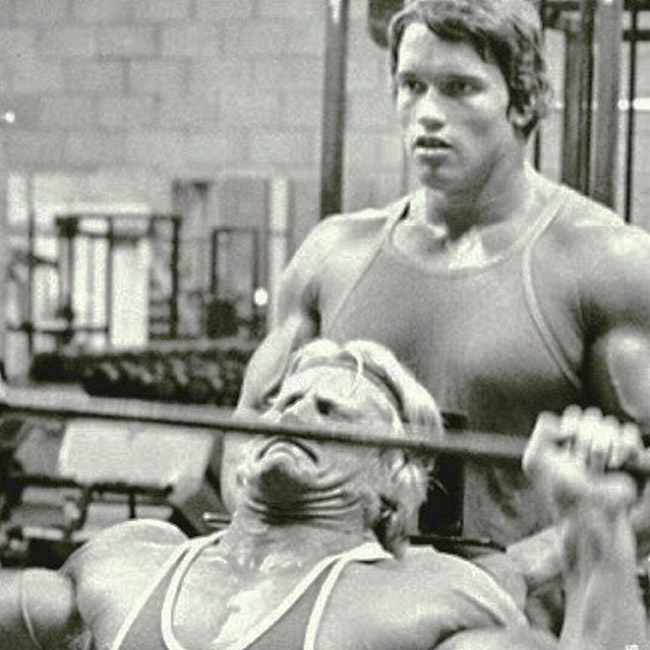 Dave training in California with Arnold.

While working for the Weider Barbell Company, he trained with Joe during lunch breaks. It was here, in Santa Monica, California, when he gained the nickname “The Blond Bomber”.

2 years after his debut show, Dave was hungry for more. Under the guidance of his boss, he won the 1965 IFBB Mr. America in his category and overall title.

A year later, Dave took home another trophy after winning the 1966 IFBB Mr. Universe and overall title. Riding high from his success as a competitive bodybuilder, he decided to enter the world of acting.

He appeared in two films over the next 2 years. However, he never quit his true passion and his last job as an actor was in 1967.

During this time, he won the coveted Mr. Universe competition in 1966, gaining more recognition for his physique. 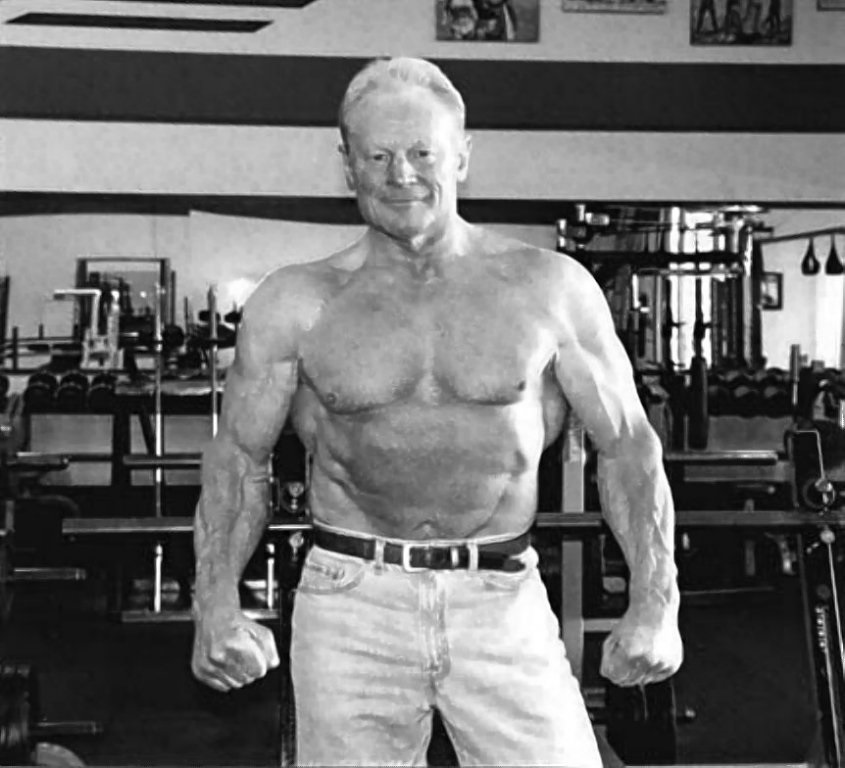 Dave training in the gym after his retirement.

At the age of 25, The Blond Bomber entered his biggest contest yet – the 1967 Mr. Olympia. Although he didn’t win, he placed a respectable 4th in a line-up that included the great Sergio Oliva.

Soon after, he began training at the original Gold’s Gym with the likes of Arnold Schwarzenegger in 1968. It was here that he became one of the stars of the Golden Era of bodybuilding.

After a three year break from competing, Dave decided that 1970 was his last in the sport. He started the year strong, winning the IFBB Mr. World and coming third in the AAU Mr. World shows.

Although Dave didn’t have his dream ending, he’d cemented his place among the legends of the industry. 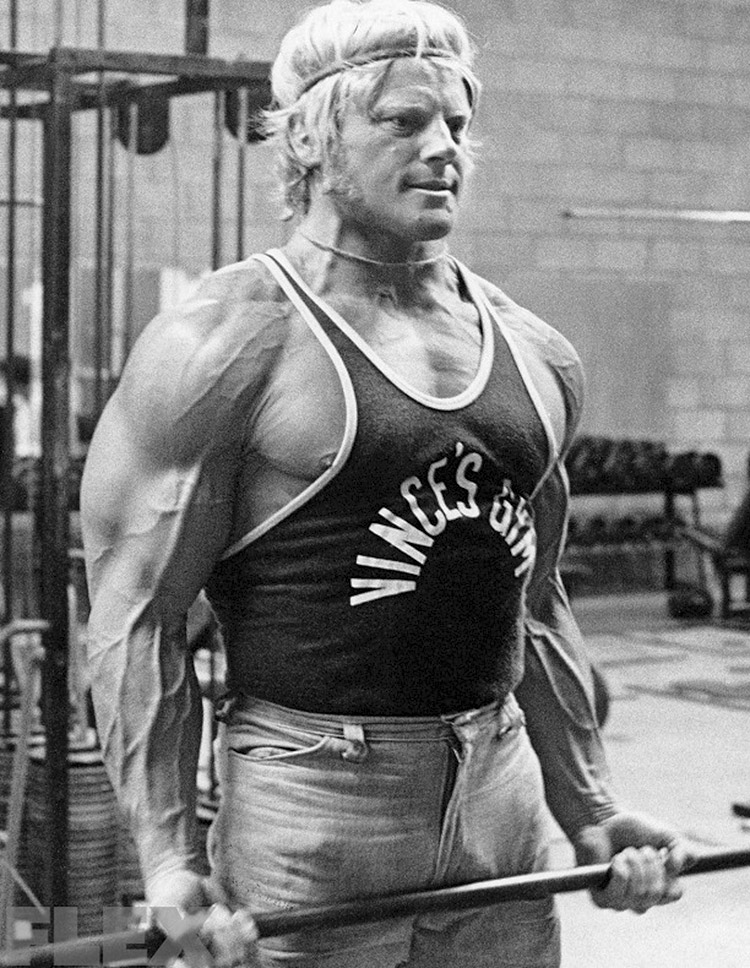 Dave didn’t follow any specific training plan, and enjoyed mixing his workouts up – this shocked his body and forced it to grow.

Dave was known to train with full-body workouts in the gym, but never trained to failure. 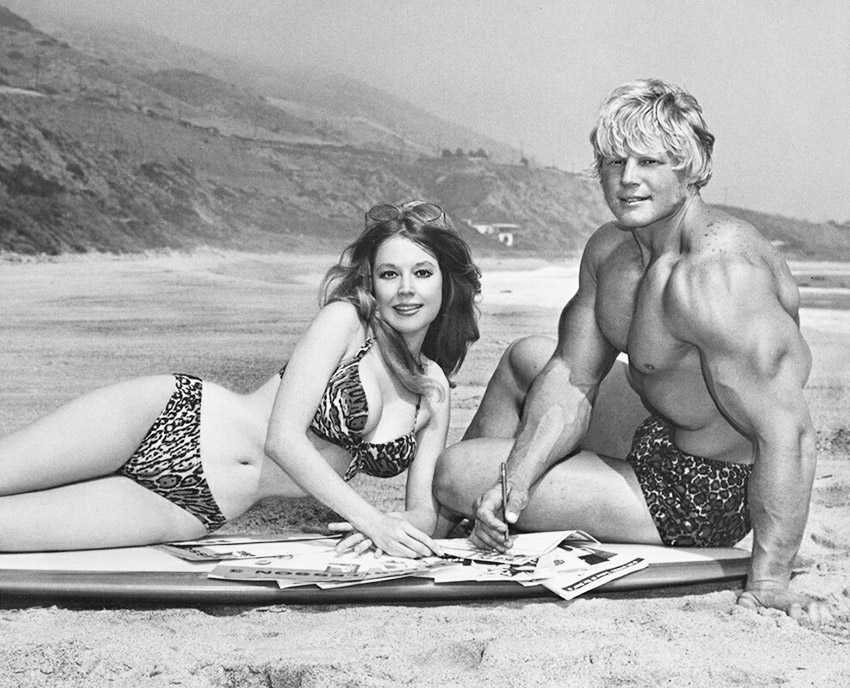 Dave would make sure to consume 7 meals a day to keep his body fuelled – he’d have breakfast at 7am and finish his day off at 9:30pm. 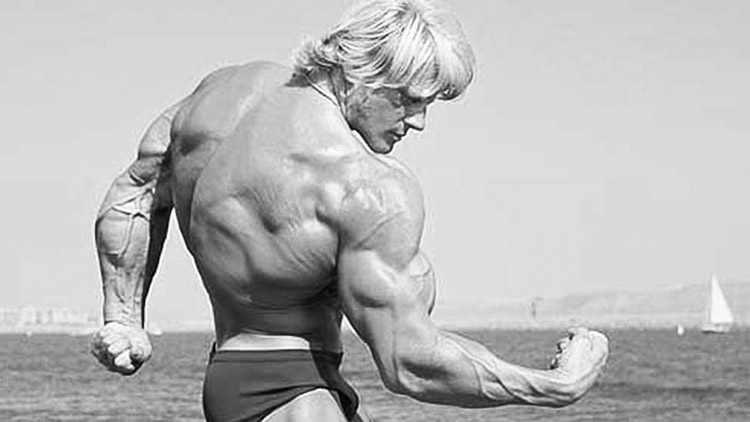 Dave was around during one of the greatest era’s of bodybuilding. He was lucky enough to train with legends of the sport, and he was influences by them all throughout his career.

However, he names Steeve Reeves as his idol, believing him to be the most naturally aesthetic athlete of the sport. 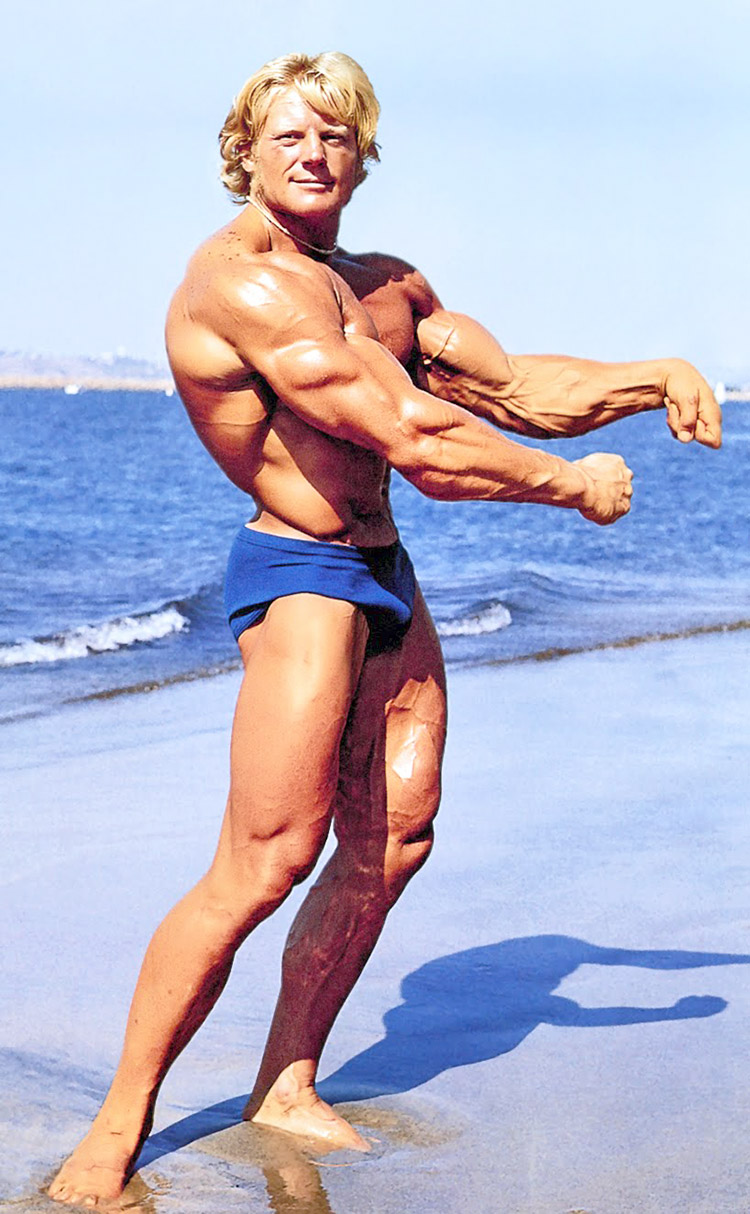 What we can learn from Dave Draper

Dave has taught us that you shouldn’t waste any time in working towards your dream. He started training before he was 10, aiming to achieve his ideal physique from an early age.

One thing we can take away from Dave’s story is that you should always make the most of your situation. He met Joe Weider and took advantage by gaining a job at his company.

Dave draper has always been a great influence in my weight training. I would love to meet him some day. Unfortunately I hurt my back. And only do very limited weight lifting. I am sixty six years old now, and still miss my earlier years of lifting. Gary Soisson.

Draper was the man who first amazed me with his physique, back in the late 1960’s. He is still my ideal as one of the very best bodybuilders ever.

Dave was the first bodybuilder we got into as kids. Him and Frank Zane are my favorites today. Both of their books are what I go to first now I am in my retirement years. 2 things helped most is making sure to be consistent and work around the inevitable injuries.

I am going to call BS on the diet and supplement regime. I highly doubt that in the 1960s he was scarfing down creatine and BCAAs.

I am a great admirer of Dave Draper
I am 69 and during the golden years he was my favourite bodybuilder with his height.mass and terrific arm development
Dave’s past and mine have similar circumstances
Would love to meet him some day
But for now I would love to get an autographed Tee shirt or tank top
If that is possible please let me know
Best regards
Greg Morrison