Charles Griffen is an IFBB professional bodybuilder and sponsored athlete from Arizona, U.S.A. He rose to fame rapidly, gaining fans through his sheer dedication to the sport, and winning several major competitions along the way.

Unfortunately, when he was a young man his mother died which “devastated” him – making him very angry towards the world. He says that without bodybuilding, he would have almost certainly gone down a criminal path, so he credits his mothers guiding spirit for steering him away from this.

Fast forward to today, and Charles has dedicated his life to being a professional bodybuilder. He achieved his pro card at the 2014 NPC Minnesota State Light Heavyweight, and since then, he’s won a professional competition. This is Charles Griffen’s story: 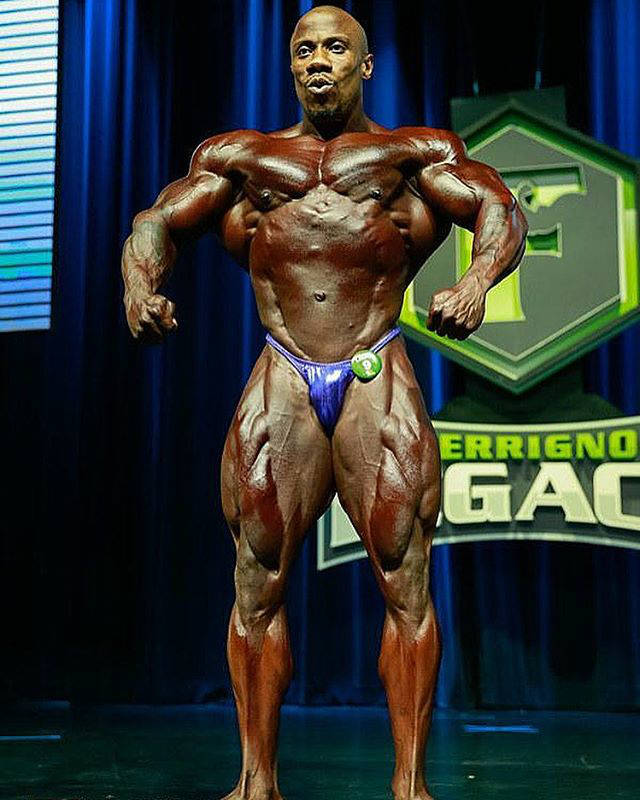 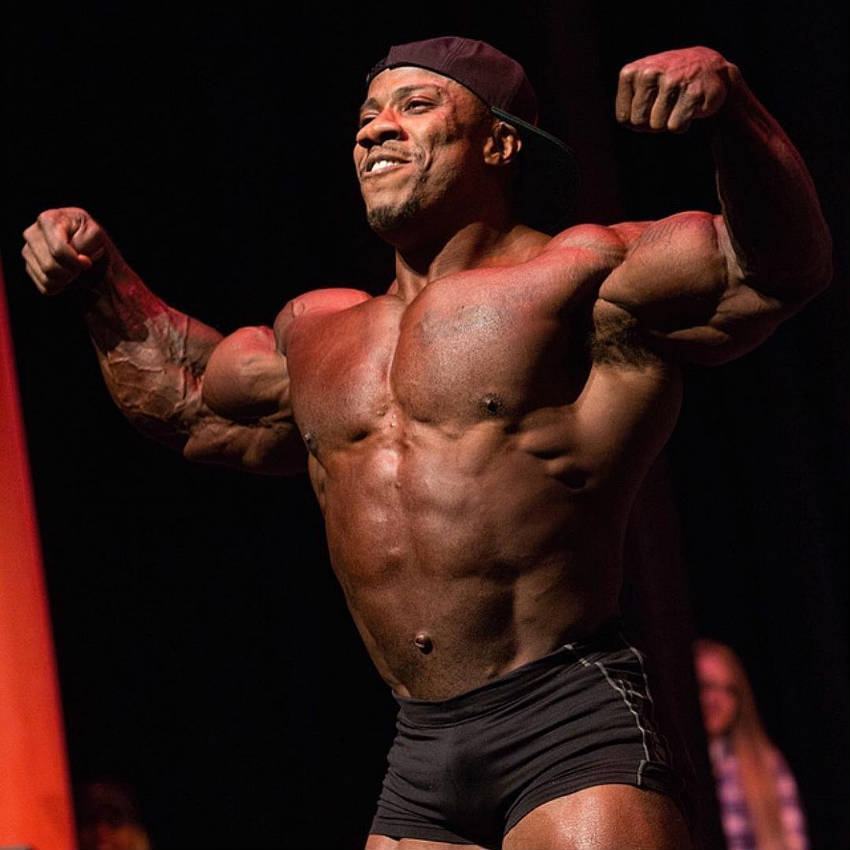 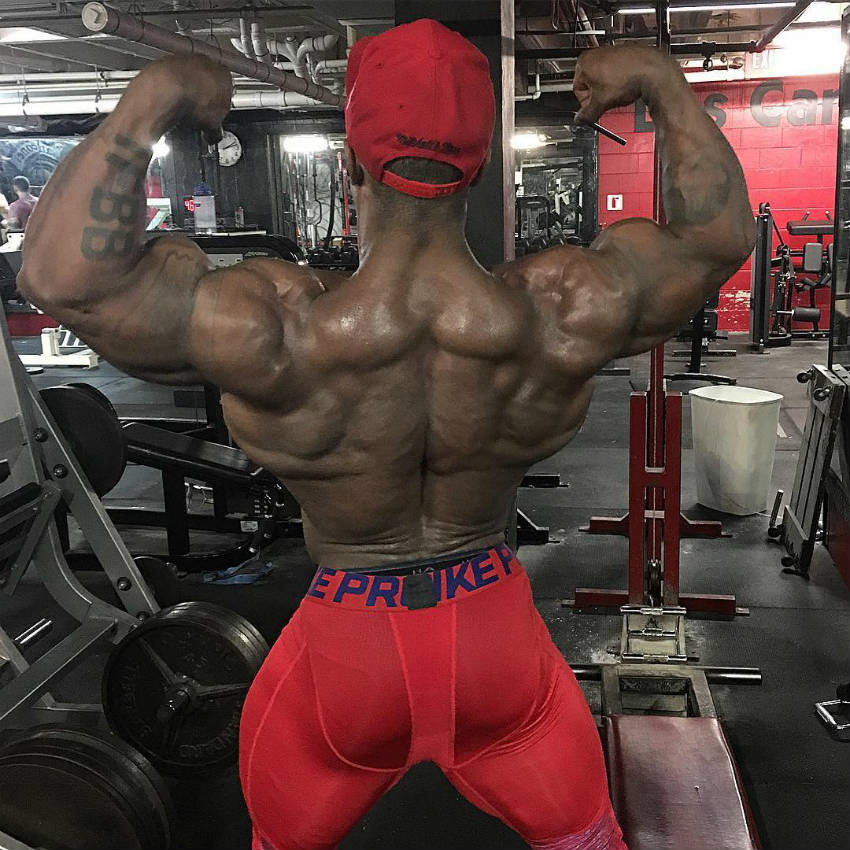 “Toughness is in the soul and spirit, not in muscles.”

Charles had a very active childhood. He grew up in Arizona, becoming heavily involved in sports in junior high school and playing football, baseball and basketball.

While he loved football as a boy, he wasn’t picked for any football teams in high school as the coaches all said he was too small at 5’5″. Instead of football, Charles chose to run in his school track and field team, continuing to play basketball to a high standard.

Charles’ guiding light in his life was his mother. She passed away suddenly in 2012, and he says that, to him, it felt like the “end of the world.” Following her death, Charles sunk into a spiral of bad behavior and recklessness – taking drugs and riding dangerously on his motorbike.

He credits his love for his mother, as the power which made him change his ways.  He believes that she guided him toward bodybuilding, and showd him that the sport could be an outlet for his anger and despair.

Charles became friends with a man who was a competitive bodybuilder, and he gradually brought Charles into the sport. He took Charles to watch pro shows, showing him basic lifts – which he enjoyed learning.

At this early stage, he admits that all he trained “was chest and arms, arms and chest!” He also says that his leg training rarely (if ever) happened, so his proportions were all wrong.

“If I had not found this sport I honestly don’t know where I would be right now. That is actually very scary to even think about. I will say probably not in a good place. I know that much, and I’m going to leave it right there. This sport saved my life and I am just thankful for that. I prefer to concentrate on the gift of tomorrow.” 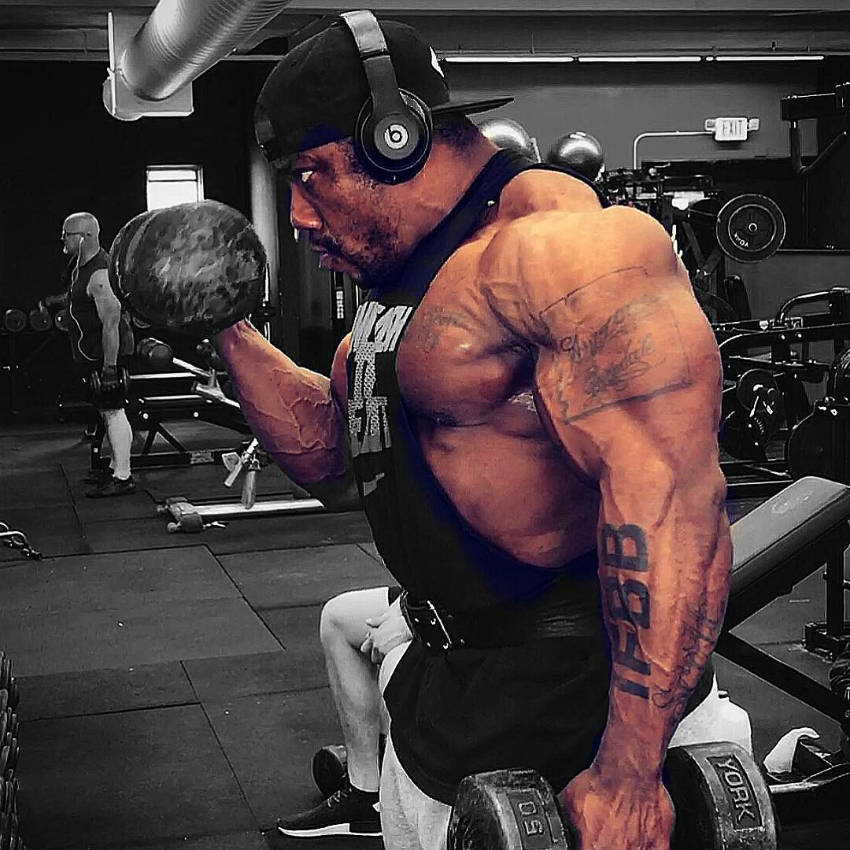 It took Charles 8 years to get to the level where he considered bodybuilding as a career. In 2014, after hitting the same gym for years to “attract women”, friends began to tell him that he had the genetics to compete.

Charles mentions that he “wasn’t really hearing it” at the time. He says that “the sport just did not capture my mind at that point, and I never gave those comments much of a second thought.” But gradually, as he began to read more about bodybuilding, he began to think about the possibility of impressing at a show.

In 2014, he targeted the 2014 NPC Minnesota State, completing most of the show preparation on his own. He asked IFBB Pro Tim Johnson to help him with the final cutting stage, and he agreed. Charles says that Tim “really cares about his clients”, and through his hard work, Charles managed to win the show which gave him his Pro Card.

At the NPC North American and Nationals of the same year, Charles didn’t fare as well. In fact, he didn’t manage to make the top 5 at either, but he enjoyed the process, and it was clear that he had the genetic potential to do a lot more.

“A life spent making mistakes is not only more honorable, but more useful than a life spent doing nothing.”

After these competitions, Charles sat down with his coach to discuss what his next move would be. He could either remain at light-heavyweight and compete further, or could move up a weight and become a heavyweight competitor.

They decided that he could probably go up to heavyweight, and as they agreed, Charles ordered the biggest pancake meal the restaurant had.

With Mr Johnson’s help, Charles managed to add 25 pounds of lean muscle. He returned to the USA and Nationals the next year as a Heavyweight, and won. Through doing so, he landed his Pro Card and secured his place in history as a Light-Heavyweight champion.

Charles believes that the program paid off, saying that he managed to improve his legs dramatically. He was also happy with the “round caps” he managed to develop on his shoulders – seeing these as a great new addition. 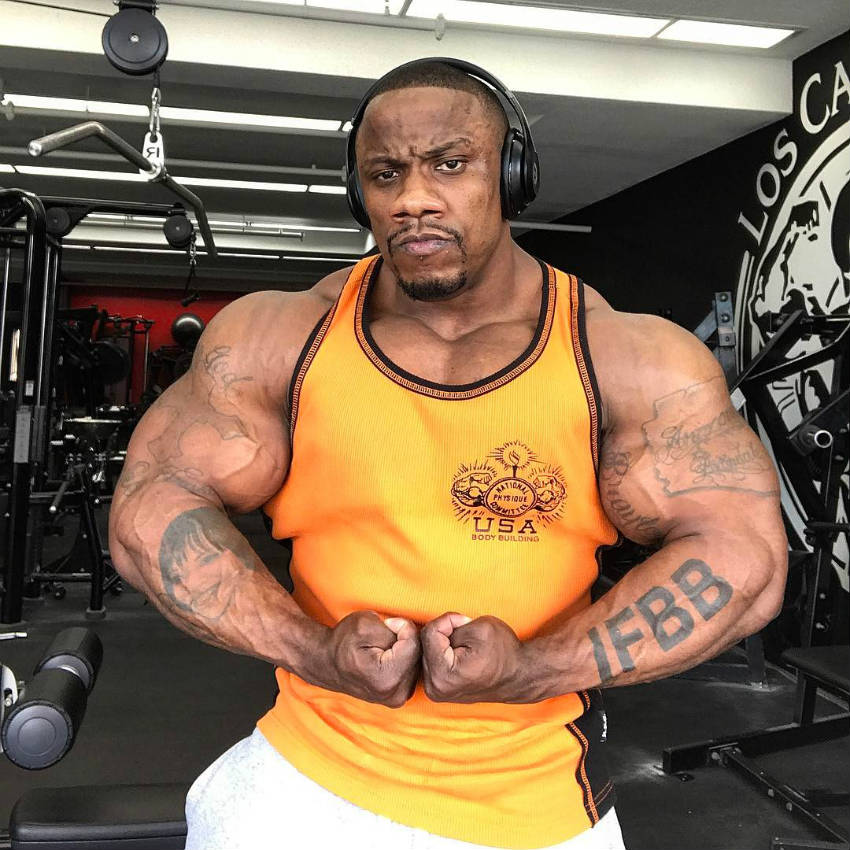 Charles trains his whole body heavily in order to maximize his muscle gains. When it comes to his arms though, he goes all out and lifts as heavily as he possibly can until failure.

As a result, he has some of the best arms in the game according to the media. They have labeled him as “a young Phil Heath,” due to his size and appearance.

One area which he focuses on intently when training is the “feel” of the lift. He says that he’s spent a lot of time working on his mind-muscle connection, enjoying the sensation of the squeeze at the end of the movement.

“I try to picture the blood flow filling the muscle with each squeeze until I’ve got a skin-splitting pump.”

With the same aim in mind, Charles likes to slow down the tempo of the workout. He says that, through doing this, he can increase the time under tension. He advises all beginners to stop training so fast to get a quick pump, and to instead spend a good amount of time on each set.

Charles also sees that instinctive training is highly beneficial. He’s come to understand his body – knowing exactly when a certain workout needs to be completed. He bases this judgement on how his muscles are feeling; knowing how far to push, without suffering from an injury.

Charles believes that his back was one of his best areas going into his professional competitions. Through instinctive training, Charles says he managed to improve on its size and shape dramatically. He credits these improvements for his 2015 NPC Nationals heavyweight victory. 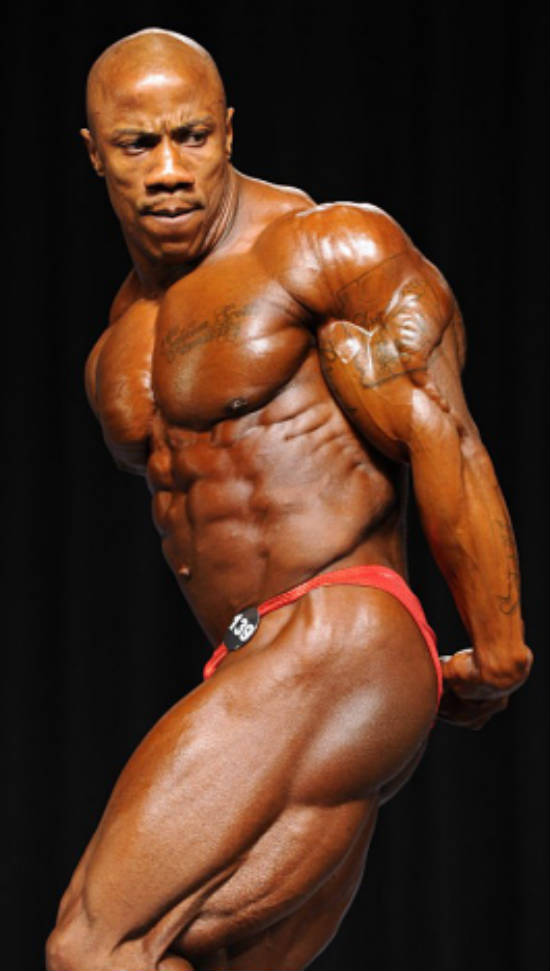 Charles eats an extremely healthy diet, but he does throw a few cheat meals in now and then. One such meal is a pile of pancakes drizzled in butter and maple syrup. While he knows it could be healthier, during bulking season he doesn’t mind indulging occasionally.

He also likes to have meals and meats delivered directly to his house, through a bodybuilding meal company. He prefers this method, as it allows him to think about his training, rather than preparing endless meals.

His favorite meals from this company are the 8oz steak with rice and beans, and the chicken and sweet potato dish. When he is tired and in need of a quick option, he believes these meals are “life savers”.

While he does use convenience options, he makes sure that every meal hits his macronutrient needs perfectly. Luckily, the company takes that into account, but when he is not using their meals, he sources lean meats such as turkey and chicken. He also eats a lot of fish such as cod and salmon.

In terms of his carbs, Charles is a big sweet potato fan. He also loves to eat a variety of rices and legumes. In cutting season, he reduces these carbs down a lot- focusing on muscle gains alone. 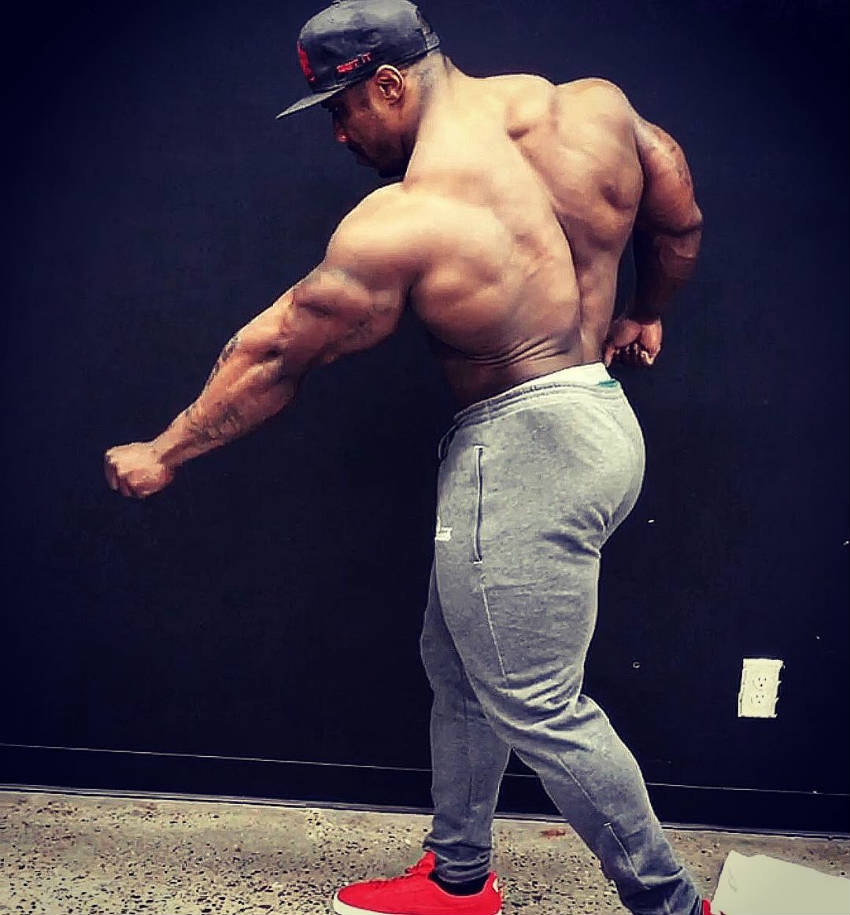 Charles’ main influence is his mother. Her death tore him apart emotionally, but he believes that it was her spirit which guided him towards bodybuilding. He mentions her regularly in interviews. 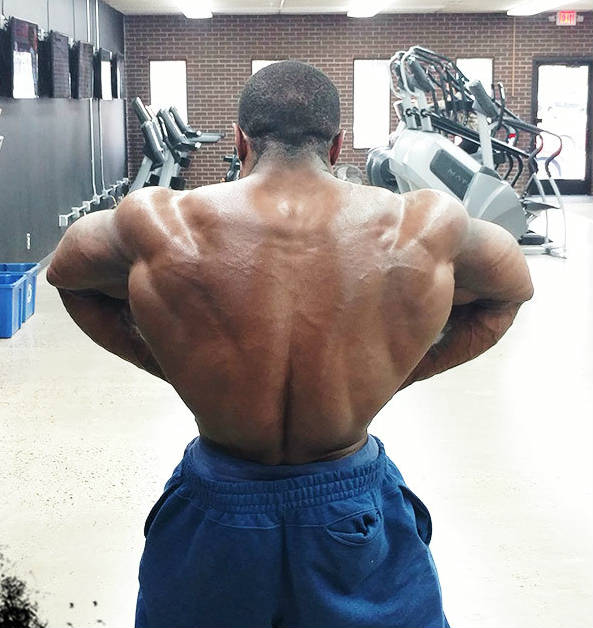 What we can learn from Charles Griffen

Charles’ story can be a lesson to us all. Bodybuilding is a great way to introduce structure into our lives. It may be useful to take your fitness routine more seriously, as the benefits it can provide for your life cannot be underestimated.

Very interesting, and real, road to redemption. I can relate to the hardship, and sorrow, of losing a beloved parent. I’m glad he has recovered from his deep grief , and that his life has improved. Wishing him many more life-goal success.