Ben’s fitness journey started when he was 14 years old in an attempt to improve his strength, and size on the rugby field. With all early attempts failing miserably, Ben left the gym, and the same decision soon followed with rugby for a short period of time.

However, Ben soon realized that if he wanted to get into the best shape of his life, he needed to take the bull by the horns and step back into the gym. After much frustration, car crashes, and nights spent cuddling his cat, Ben eventually found his sweet spot and made the gains he always wanted.

Although he doesn’t have the most aesthetic physique in the world, Ben is a rugby legend, kind hearted person, and loyal companion among his close fiends. This is his story: 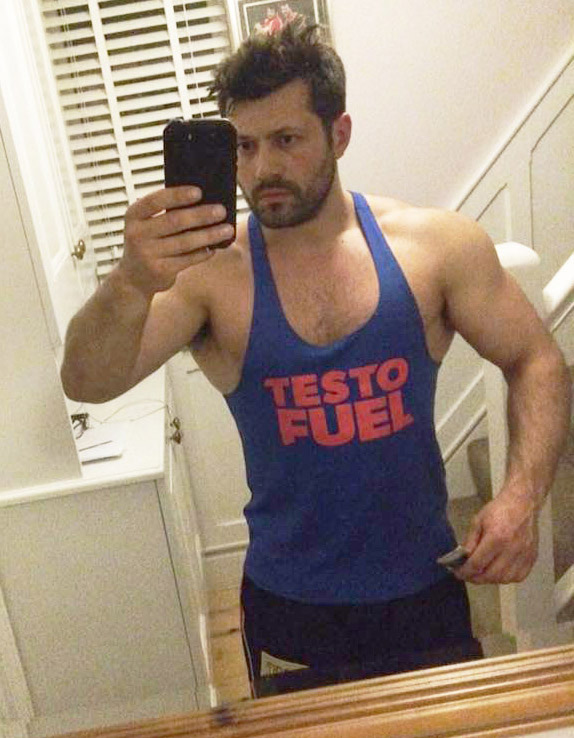 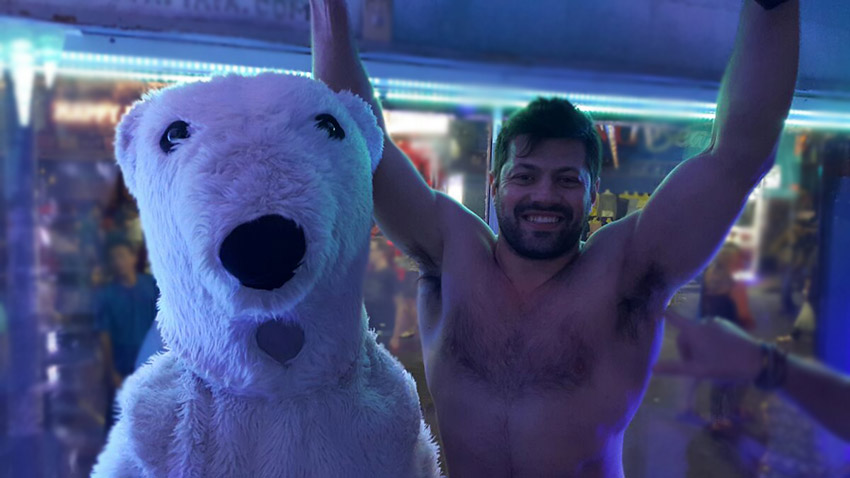 In Thailand meeting his coolest fan 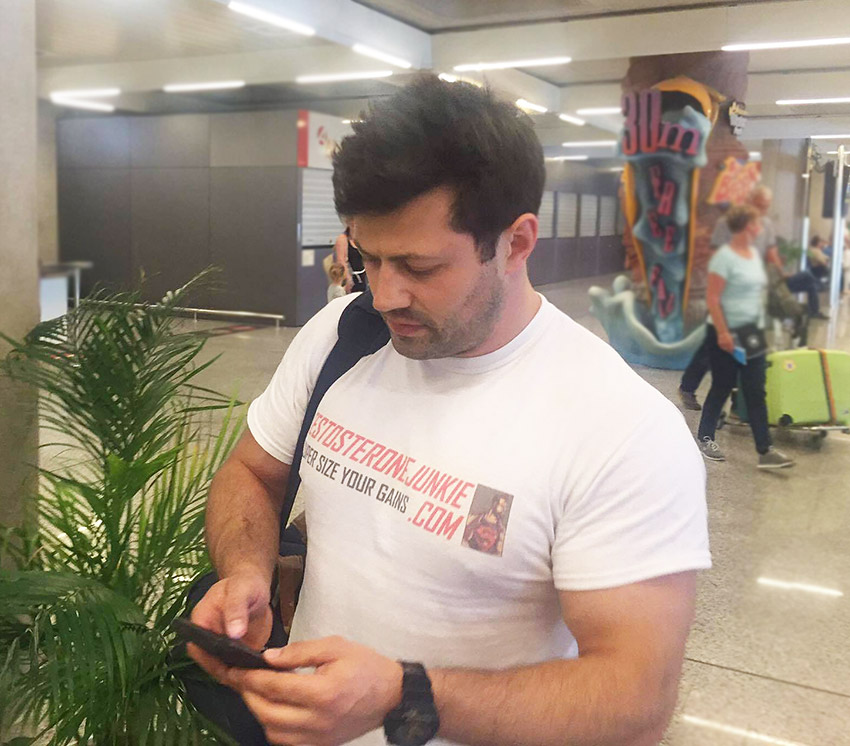 On the go replying to fan comments and messages

Ben first started training when he was 14 years old in his local gym in order to improve his strength on the rugby field. He loved the new environment, “I thought this was amazing,” said Ben. However, he didn’t have much knowledge or experience when it came to lifting weights.

He continued to visit the gym week after week, but he just couldn’t get the hang of what he was supposed to do. As Ben said; “I knew nothing about sets, reps, form or what bits of kit to use so I didn’t really benefit. The problem was, I didn’t have a clue what to do when I was there.”

After he wondered around aimlessly, trying pieces of equipment, but with no real purpose or goal, Ben eventually left the gym. Upon leaving, he struggled to fully grasp the basic principles of weight training.

“Eventually I left non the wiser about anything really except that I thought I would like to be a fireman after high school.”

When Ben entered his final years of high school, he was fortunate enough to have, at his fingertips, a brand new gym that was “full of equipment”. As Ben was an avid rugby player throughout school, he was encouraged to use the new facilities.

“My school ended up building an amazing gym, this was very fortunate. While playing rugby the use of the gym was encouraged, but not really to build lots of muscle.”

As Ben slowly became more familiar with training, more specifically, “aerobic fitness,” he realized the“key to winning rugby matches,” was overall fitness. As Ben said; “the team who is the fittest has a massive advantage especially considering a game is 80 minutes long.”

Although Ben learned a lot about cardio vascular fitness for sports, he was still at a loss when it came to building muscle size, and strength. 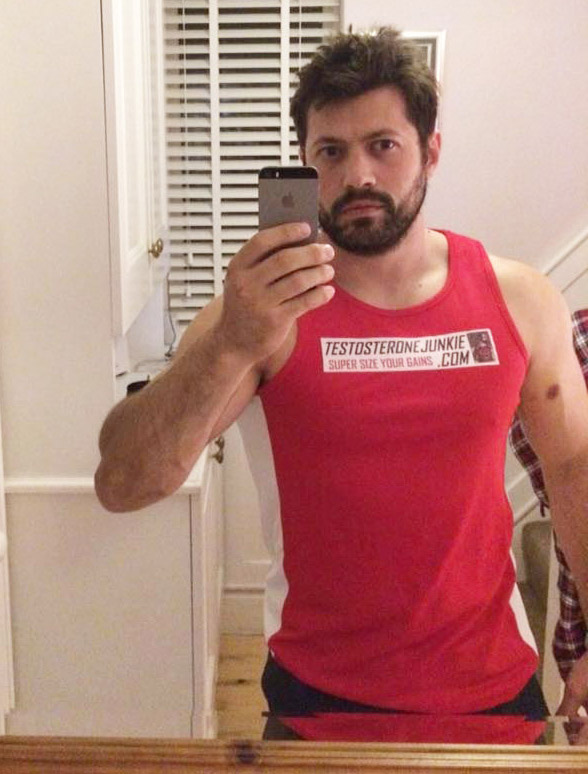 He is no stranger to selfies

When Ben entered his first year of University, he decided to stop playing rugby, instead, he decided to focus all of his attention on his studies and education.

However, after a period of time living the University lifestyle, he was concerned about his overall fitness and muscle gains. This is when Ben decided to get back into shape. He bought some home gym equipment, more specifically, a push-up bar. Ben said, “I began to make good progress with them.”

After starting small with 3 sets of 10, he then begun to increase the volume more and more. By the time he finished University, Ben was doing up to 10 sets of 100 reps, “almost every night!”

Ben became addicted to his press-up routine, so much so that if he missed a night, he’d become incredibly disappointed with himself. This is when Ben decided to get serious, he joined a gym for the first time since he was 14.

It wasn’t the high end experience he knew back when he was 14. Ben said, “it was small, hot, over subscribed and a bit aggressive.”

Needless to say, it was a gym that Ben grew to love. After more research, and years of training in various places along the way, he was doing deadlifts, pull-ups, “and using all of the machines and free weights.” Ben finally started training in the way he always wanted.

Ben ended up moving around London throughout the 8 years he lived there. In that time, he transferred his membership to a facility which offered newer equipment, and with a larger floor space, but he wasn’t satisfied, something was lacking. It wasn’t until he found a “bare bones” gym that Ben really started learning how to lift weights properly.

“Okay, it wasn’t air conditioned, it had very little in the way of luxury but it did have a hex bar and bigger dumbbells. In fact, it was great and I loved it.” 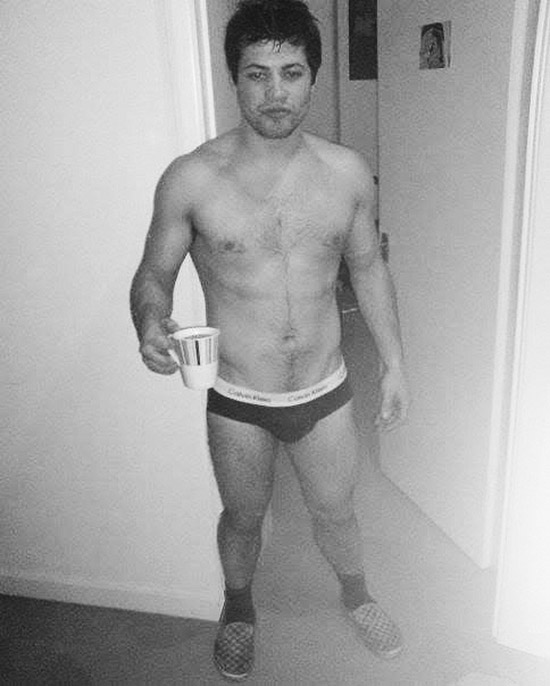 Living In The North of England

After a few years living in London, Ben decided it was time for a change of scenery. He moved to the North of the country, Leeds United Kingdom.

In search of a new gym, Ben found exactly what he was looking for, another “no frills” gym. He immediately felt welcomed, and at home in his new gym. He said, “it had Loads of quality kit. It wasn’t new but it was proper, timeless equipment.” Ben settled into life in the North of England without a hitch.

The gym had everything he could have wanted, it was an old-school gym with every piece of equipment under the sun. However, it was always cold. As Ben said, “to say there was less holes found in cartoon cheese would be an understatement. That place was perpetually cold.”

“Even when it was the slightest bit mild outside you could always see your breath when you were inside. I had never worked out in a gym wearing a jacket before or a fleece. I had now.”

After enjoying, but at the same time, resenting the gym for it’s cold rooms and equipment, Ben decided it was time to buy his own set of weights and make a home gym.

Upon purchasing his own squat rack, and chest press machine, Ben finally found his “sweet spot” when it came to training. His years of experience through his travels around the UK,  Ben could finally put everything he learned into practice in the comfort of his own home with his cat Molly.

The birth of Testosterone Junkie

With 15 years of weight lifting, playing rugby and the longest bulking season known to man. Ben was now qualified to start helping and advising others. In 2015 he launched TestosteroneJunkie.com – a no-nonsense guide to lifting, nutrition and supplements. By a real bro, for real bro’s.

Since 2015, Ben has gained a social media following and has received several messages and comments on his website. He is now labelled as ‘The Authority’ on fitness and nutrition.

The website is one of Ben’s many hobbies, he spends most evenings and weekends updating and managing it.

Ben’s known to be a lover of the felines. His cat Molly often enjoys watching him train in his garage, and when they’re not in the gym together, they spend nights cuddling on the sofa, or in the bedroom. It’s clear to see that Ben is not all brawn, he also has a soft side for kitties. 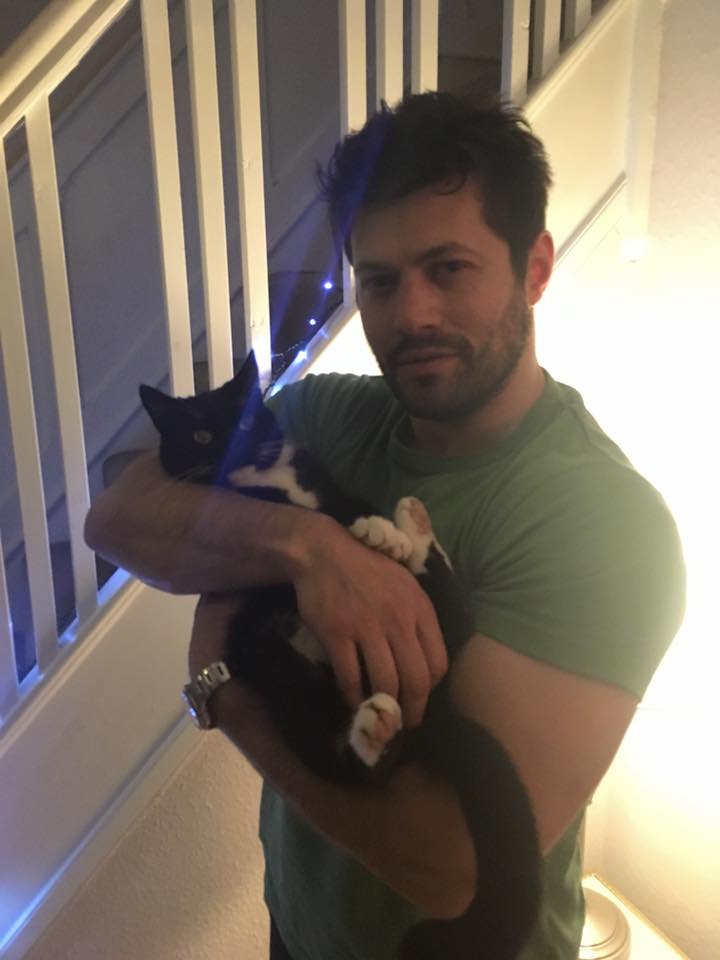 Ben and Molly often sleep in the same bed

During one of his country rides, which Ben often enjoyed in his “collector cars,” more specifically, his 306. He was driving, taking in the scenic view, and suddenly out of nowhere, he crashed into a power substation. The car was destroyed, and with it, his French dream ended.

Ben’s passion for rugby continued to stay in his heart all the way through his travels, and numerous gym memberships. After taking the leap back into the sport, Ben can now be found playing for Chesterfield Panthers. A well-known team in the North of the UK.

With his size, and strength, Ben’s adopted the position of centre. As the centre, Ben is known for his aggressive, hard-hitting playing tactics where he takes the brunt of the opposition by force. 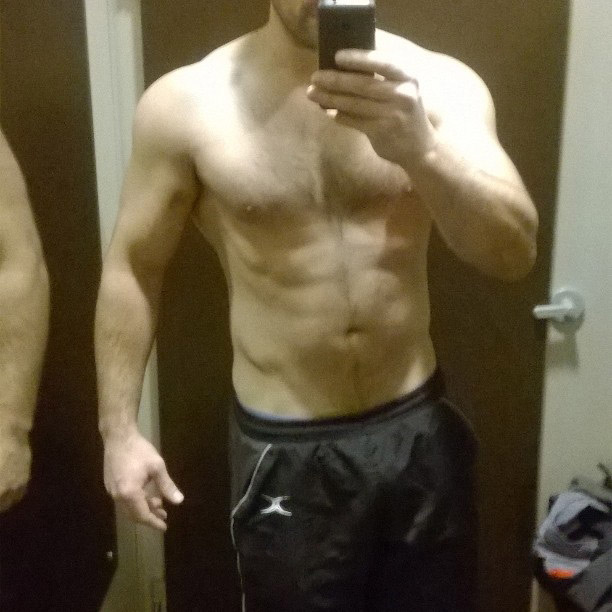 Cutting fat is for girls

Ever since the beginning of his journey into fitness, Ben has gone from gym to gym, and “in-and-out” of sports for as long as he can remember. However, he’s learnt some of the most valuable lessons along the way through trial, and a lot of error!

Ben’s typical workout routine will consist of heavy compound exercises such as the squat, chest press, and weighted neck pulls. All of which help him perform better in competitive rugby. 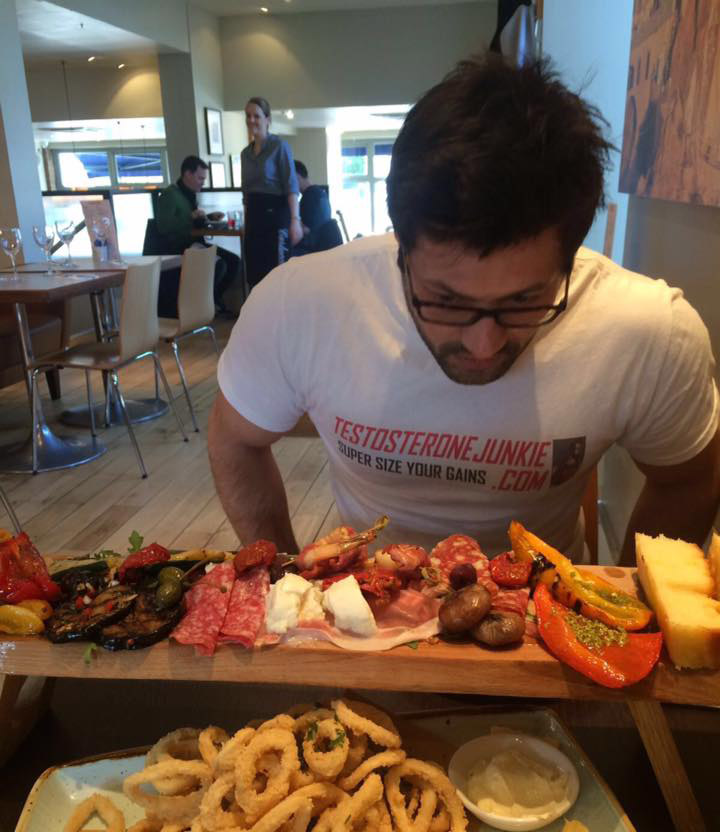 “Cheat meals, in my opinion, more the better.”

It’s been said that Ben’s been bulking for 10 years, his fans are often awaiting the elusive cut. He’s taken the approach “anything goes” when it comes to nutrition. He often eats eggs, boiled or fried with anything on the side.

Take away food, such as fish and chips and burgers, and the occasional fast food meal, or two, can be found on Ben’s daily menu. Some of his favorite meals are sandwiches, chips, milkshakes and fried foods. He’s an eating machine!

On a Saturday night, after the weekly rugby game with the guys. Ben enjoys eating fast food and drinking large amounts of Guinness, he has been known to down 10 pints in one evening.

Along with his all year-round bulking approach to nutrition, Ben also likes to use a multitude of supplements, such as protein shakes, testosterone boosters, vitamins and minerals. 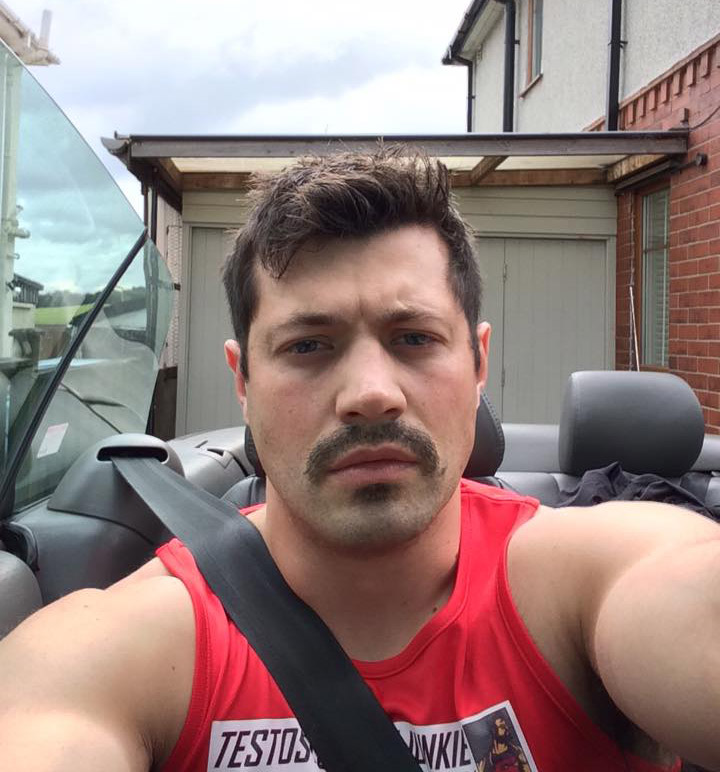 In the Saab convertible, one of Ben’s many vehicles

What we can learn from Ben Bunting

So far we haven’t learnt a great deal from Ben Bunting, however, we’re always waiting for something inspiring to happen.

He can be found giving advice on old cars, bulking methods, and how much he loves cats. Apart form this, we haven’t seen much else going on in Ben’s life. Needless to say, we’re always hopeful of the Chesterfield Panther and what he might surprise us with next.

What a fucking unit