An Nguyen is an American professional bodybuilder who competes in the IFBB division. Originally from San Jose, California, An Nguyen was an avid American Football player growing up.

Although An initially planned on making football his full-time job, his goals started to shift when he entered the gym for the first time. After seeing progress on his physique from weight training, An was ‘sold’ to the bodybuilding lifestyle.

By the time he enrolled in college, An completely replaced football with his newly-found passion for bodybuilding. Looking up to the likes of Kevin Levrone and Flex “Kenneth” Wheeler, he went on to sculpt an awesome physique, creating a booming career in bodybuilding competitions in the process. 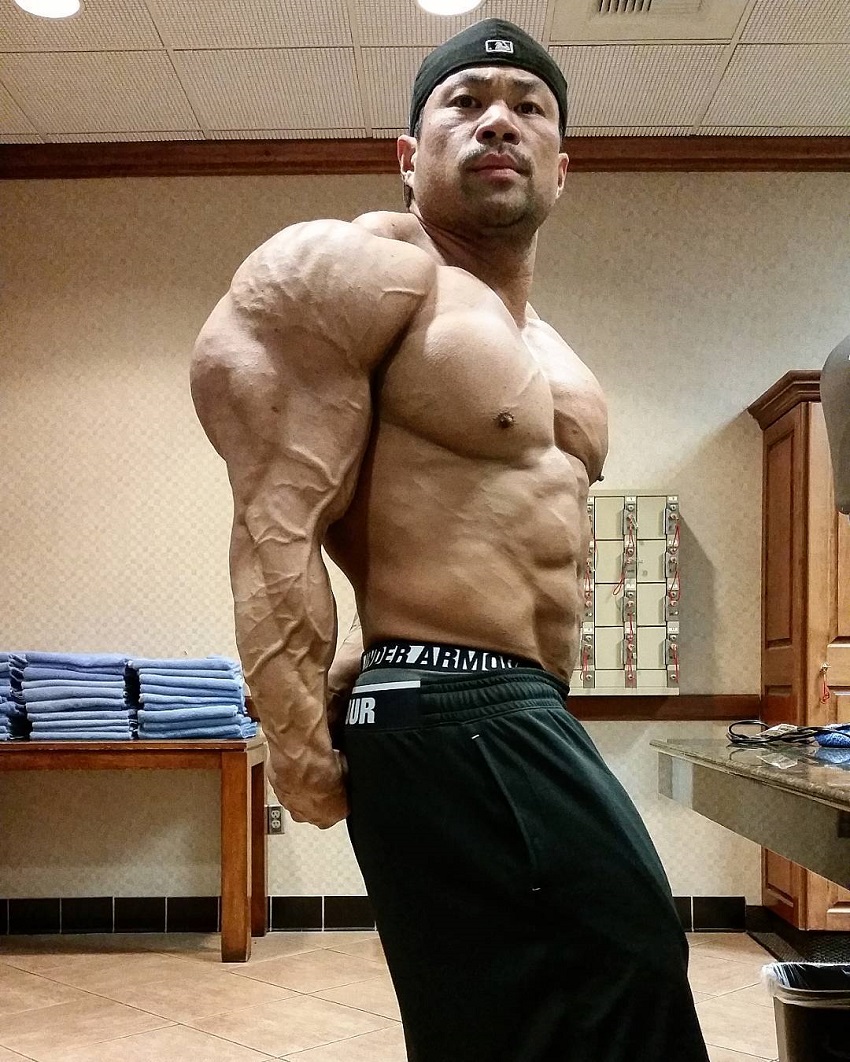 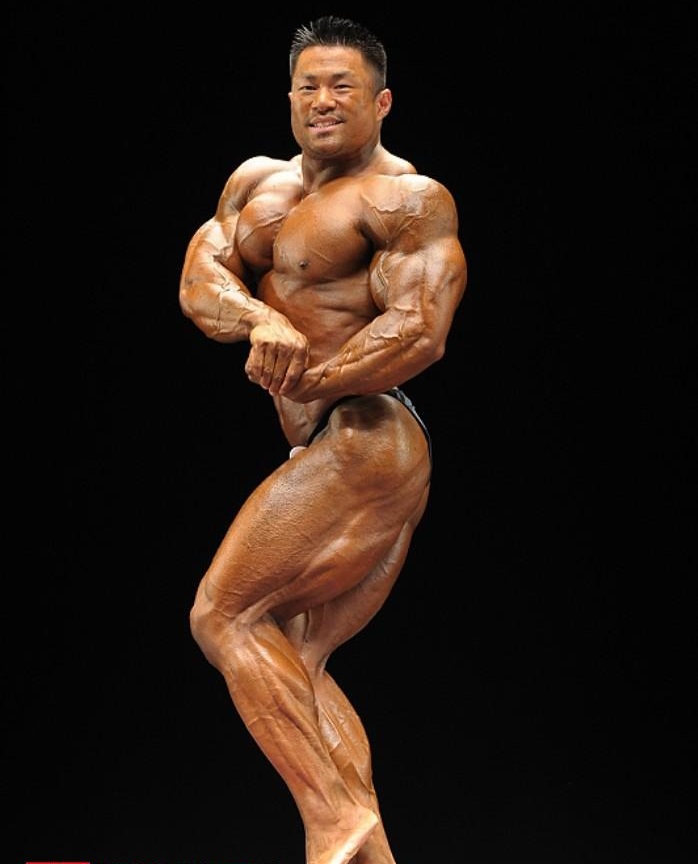 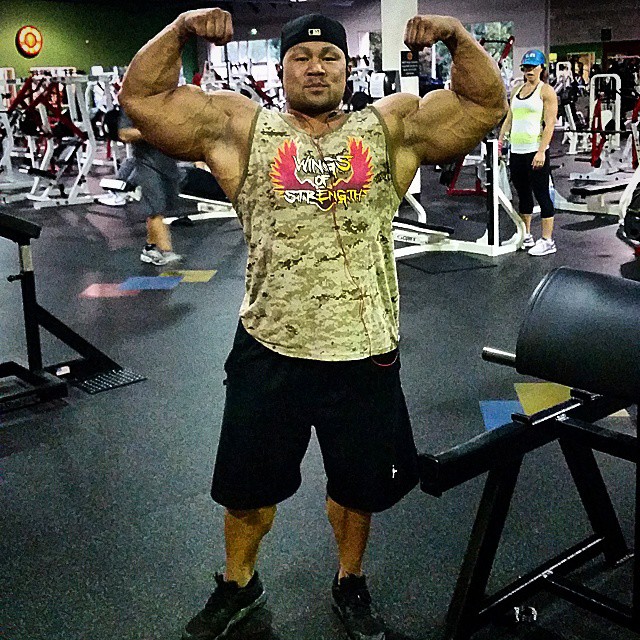 An Nguyen was born and raised in San Jose, the biggest city in Northen California. Throughout his early childhood, An developed a strong connection to sports, particularly American Football.

When An first entered the gym at the age of 12, it was to help him improve his performances on the football pitch. Initially, An planned on becoming a professional football player.

However, as An progressed in the gym, he became more and more interested in lifting weights. Eventually, An started questioning his decision to pursue American Football – instead, he grew an interest in becoming a bodybuilder.

“I started weight-training at the age of 12 for sports and I saw the gain I was making and it felt good.”

Coming into college, An had to choose whether he wanted to continue playing football or take a ‘leap of faith’ into bodybuilding. Ultimately, he went with bodybuilding.

Wanting to build a muscular and well-rounded physique, An set his sights on the likes of Kevin Levrone, Flex Wheeler, and Shawn Ray – using their physiques as a benchmark for his goals.

Devising his first training and nutrition plan, An began exercising with weights five days a week. In addition, he’d do 30 minutes of cardio each day, alongside practicing posing for one hour, once a week. 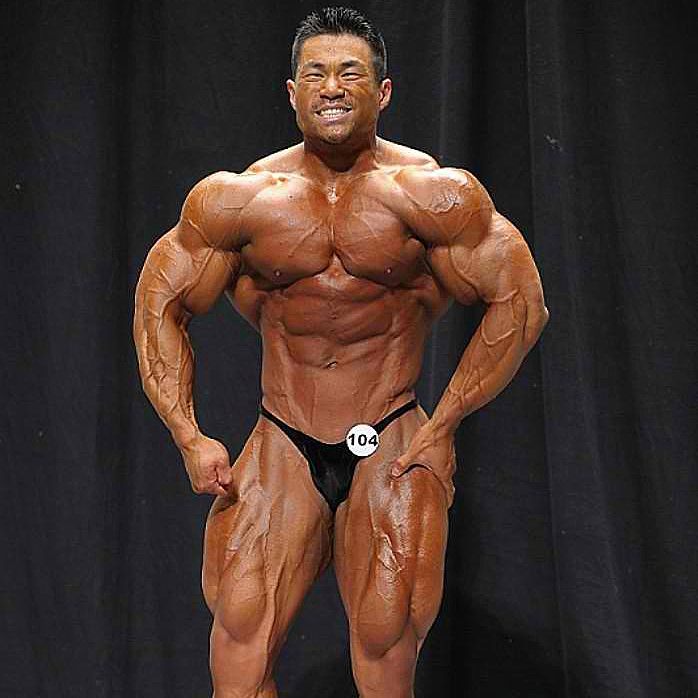 After several months of training and dieting, An was ready to compete in a bodybuilding show. Entering the teenage INBA Oakland Silver and Black Muscle Classic contest, An went on to claim his first victory that day.

Here’s An talking about his experience competing for the very first time;

“I really didn’t know what I was doing. I competed in the teenage class and placed first due to I was the only one but the audience and the people working the show was amazed at how built I was for a teenager. I did everything by myself, a lot of online research.” – An Nguyen

From there on, An became a regular bodybuilding contestant. He began competing in amateur shows across America, gradually moving up in the competitive ranks.

After several years of competing, An set a whole new challenge for himself – winning the Pro Card. Although this wasn’t an easy task, An was confident he could accomplish his goal in the following contest, the U.S. Nationals.

Here’s An talking about his preparations for the contest; “My training was intense every day, I had so many people supporting and pushing me I couldn’t half-ass.

I did 50 minutes of cardio in the morning on an empty stomach every day and 4 days out of the week I would  do 30 minutes cardio post workout and on top of that I was doing 30 to 60 minutes of posing a day.” – An Nguyen

Then, in early 2011, the competition day came. Stepping on the USA Nationals bodybuilding stage for the first time, An came in his best version yet to take home the 1st place, along with his Pro Card. 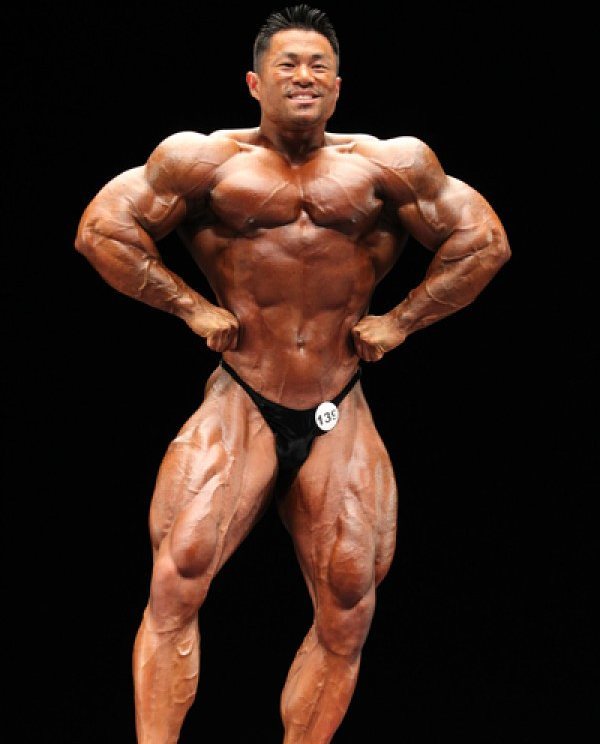 Returning victorious from the USA Nationals Championships, An didn’t wait long to make his IFBB Pro debut. His first Pro appearance took place at the 2012 Wings of Strength Chicago Pro, where An claimed an impressive 3rd place. 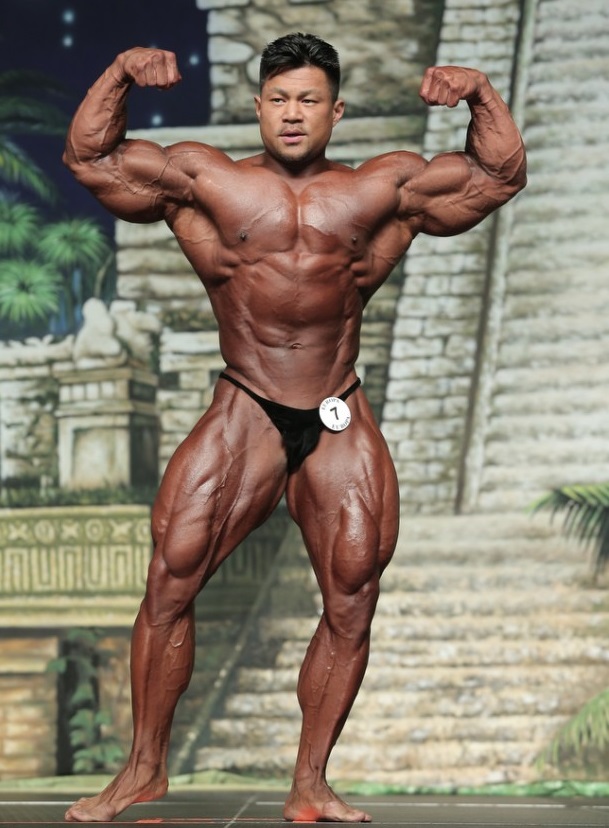 An Nguyen trains similarly to other pro bodybuilders. He starts his workouts with heavy multi-joint exercises which induce the most muscle growth.

As his workout progresses, An will move on to isolation exercises to target a specific muscle group. He’ll do 3-5 sets per exercise, and 8-12 reps per set.

An’s favorite and strongest muscle to train is his chest. On the other hand, a body part which An would like to improve is his back.

An says, the amount of cardio he does depends on whether he competes or not. When he’s not competing, An won’t do cardio very often – perhaps two times per week.

However, when there’s a competition coming up, An will do cardio every day, for about 60 minutes. 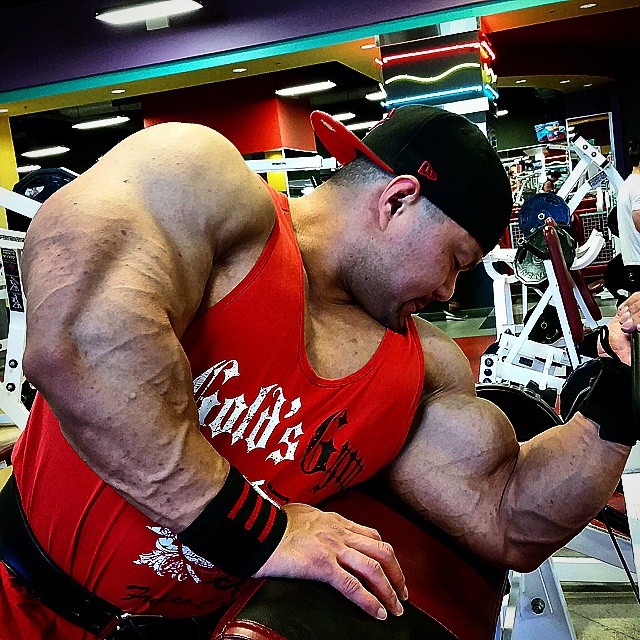 Changes in the Diet

An’s bodyweight fluctuates between 220lbs during contest preparations, and around 260 during the ‘off-season.’ This means, his diet changes significantly between these two periods.

When preparing for a show, An greatly reduces his calorie intake from carbohydrates and fats. To preserve his muscle tissue in a caloric deficit, An increases his protein intake to consume about 1.6-2 grams of protein per pound of body weight.

On the other hand, during the ‘off-season,’ An’s diet is much more relaxed. Throughout this period, he’ll allow himself more calorie-dense foods which help to grow his muscles. 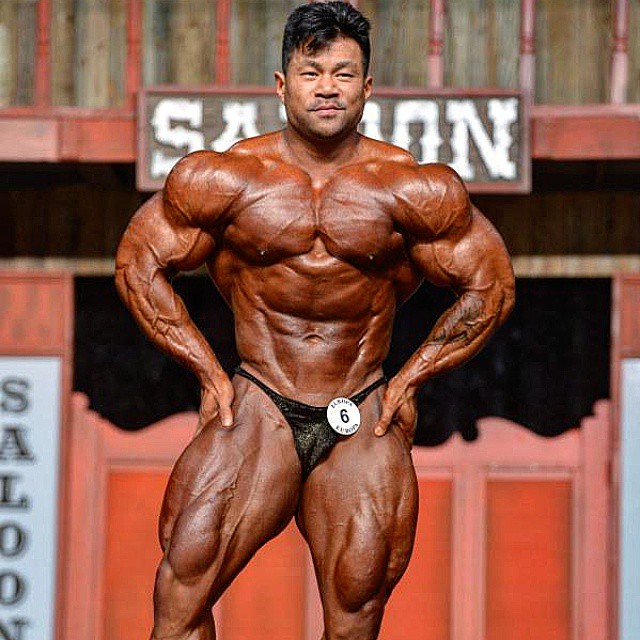 Bodybuilders that influenced An Nguyen the most were Kevin Levrone, Flex Wheeler, and Shawn Ray.

Here’s An talking about his bodybuilding idols; “The Pro’s I looked up to when I first started were Flex Wheeler, Shawn Ray, and Kevin Levrone. I looked up to them because they were the bodybuilders I wanted to look like. Great shape, round muscle with that athletic look.” – An Nguyen 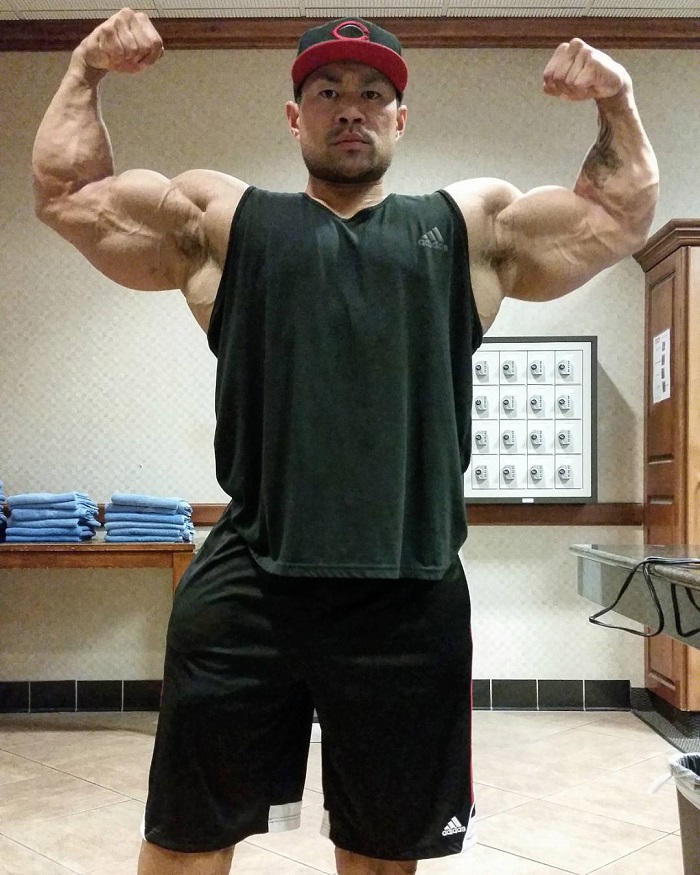 What we can learn from An Nguyen

Although An Nguyen initially wanted to become a professional American Football player, his interests changed once he discovered bodybuilding.

After years of training in the gym, An became certain that bodybuilding was his ‘calling.’ As a result, he abandoned the football pitch and replaced it with the weights room.

The main takeaway from An Ngyuen story is this; don’t be afraid to abandon certain things in order to try new ones. As you grow in experience, your interests might change, and that’s completely normal.

Once you start following your intuition, everything else will fall into place – just like we’ve seen with An Nguyen.

He really accomplished something. I look up to those guys too, and now him as well.