Taylor Spadaccino is an American fitness model, bikini & figure competitor, and Marine Corps veteran. With her remarkable figure and work ethic, she’s set an example for an army of fans who follow her online.

Growing up as a slim child, Taylor set out on her fitness journey during her deployment in Afghanistan. She said; “Aside from work, there is not much out there to do. I figured I’d start going to the gym, why not? I had no idea what I was doing and I was a little weakling. I couldn’t even do a pull-up.”

Taylor began to learn from two of her friends who were in the U.S. Marine Corps and had experience in lifting weights. She loved the way she felt and soon began to see changes in her body. Upon returning from her deployment, Taylor began pursuing fitness full-time. She hasn’t looked back since.

Taylor has gone on to become a fitness icon and competitive athlete; winning contests such as 2015 NPC Greater NY and 2016 NPC Junior Nationals. With the latter victory, Taylor also won her Pro Card and entered the elite IFBB league in the process. 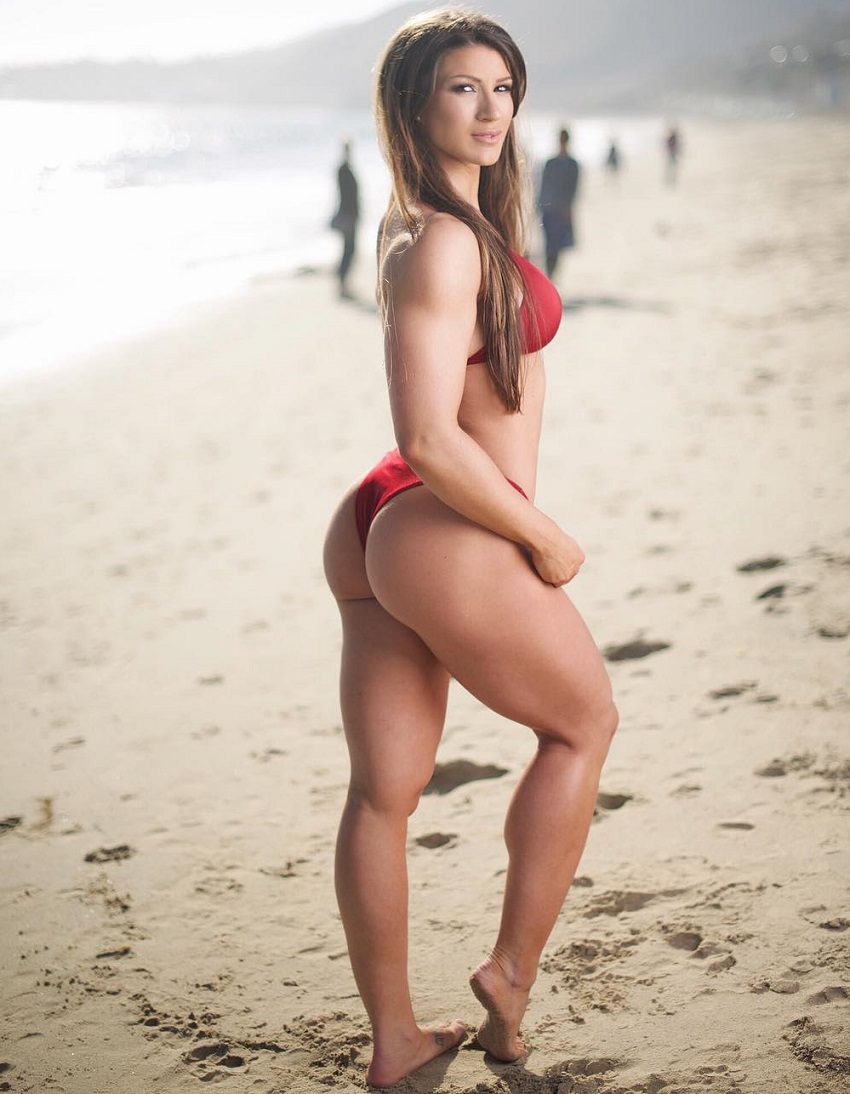 “Each day that passes I become a little more “me” and each day I care a little less about how the world wants Taylor to be. It’s really a remarkable feeling.” 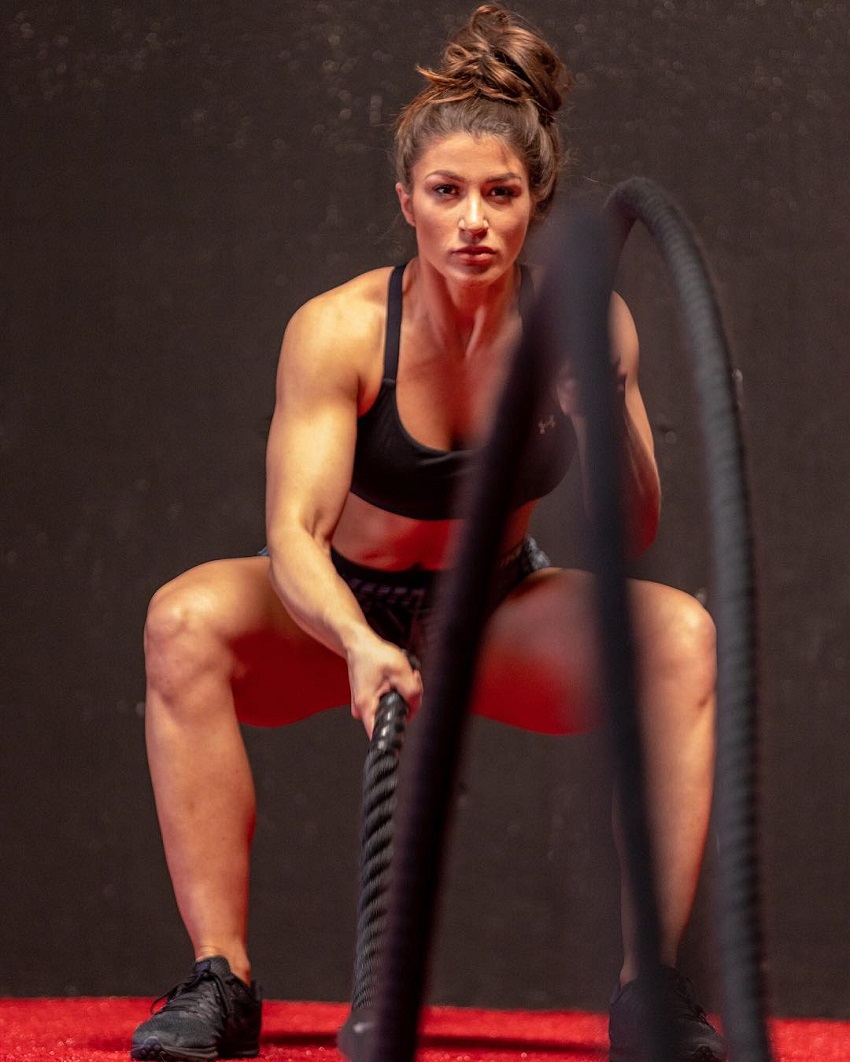 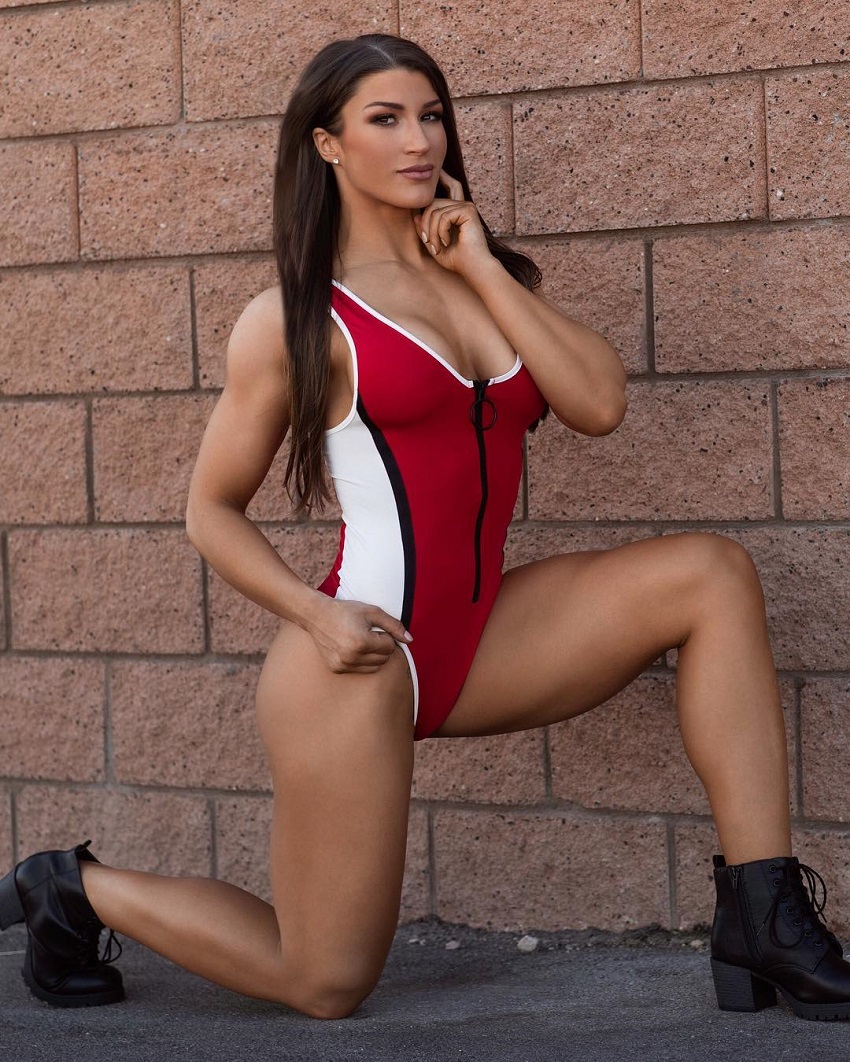 Originally from the United States of America, Taylor Spaddacino is a fitness model and IFBB Pro Figure & Bikini Competitor.

From an early age, Taylor showed affection and love for her country. This eventually led her to join the U.S. Marine Corps.

She wasn’t interested in fitness until she served in Afghanistan and discovered that weightlifting made her feel alive and strong.

Day after day, she’d train hard, all while serving in a war-torn and hostile country. Taylor recalls she couldn’t do one pull-up when she started training.

However, it didn’t take her long to improve this – quickly gaining strength and muscle tone. Exercise soon became something Taylor couldn’t live without. 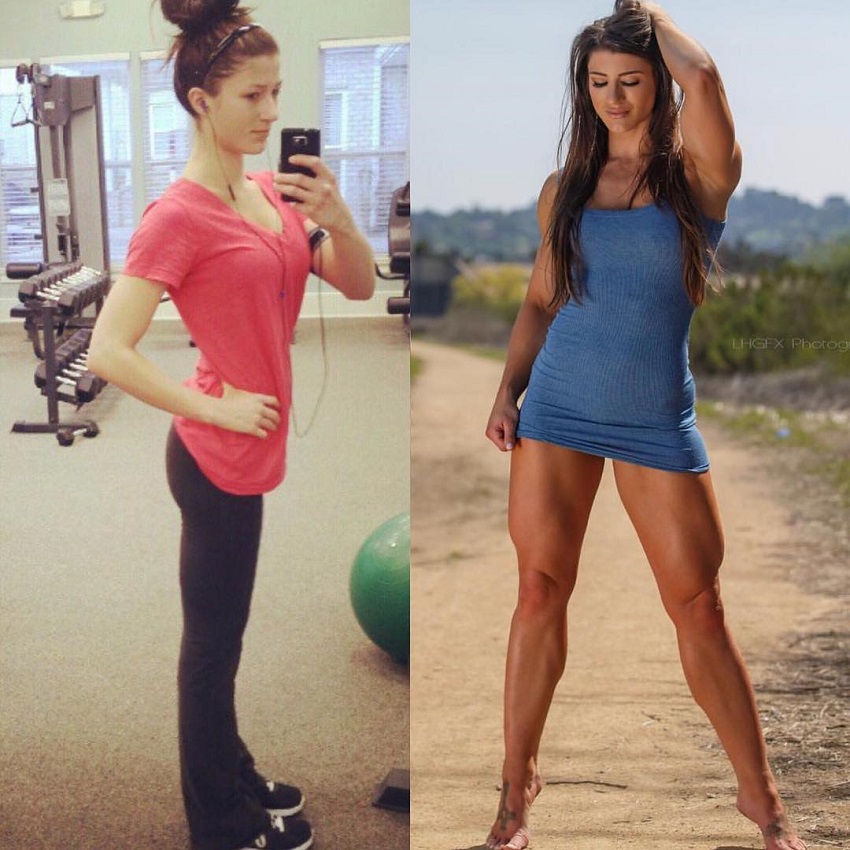 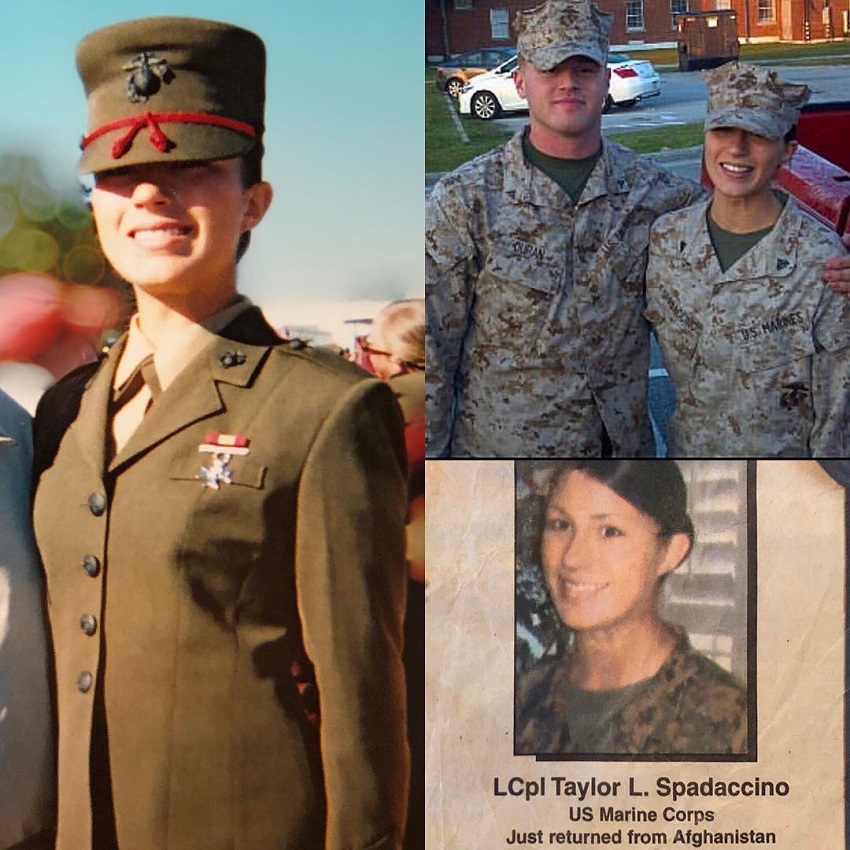 Taylor Spadaccino during her time in the U.S. Marine Corps.

After returning from her service, Taylor switched her focus on training and dieting to improve her figure even further. Her hard work started paying off after months of commitment.

Eventually, Taylor decided to test her improved physique on the fitness stage. In December 2012, she took part in her first bodybuilding contests and hasn’t looked back since.

Throughout the years of competing, she’s garnered a number of victories – including the 2016 NPC Junior Nationals which saw her enter the IFBB Pro circuit.

The discipline and hard work Taylor has cultivated over the years of service in the USMC carried over to her fitness lifestyle. Since then it has helped her stay on track towards reaching success in modeling and figure competitions. 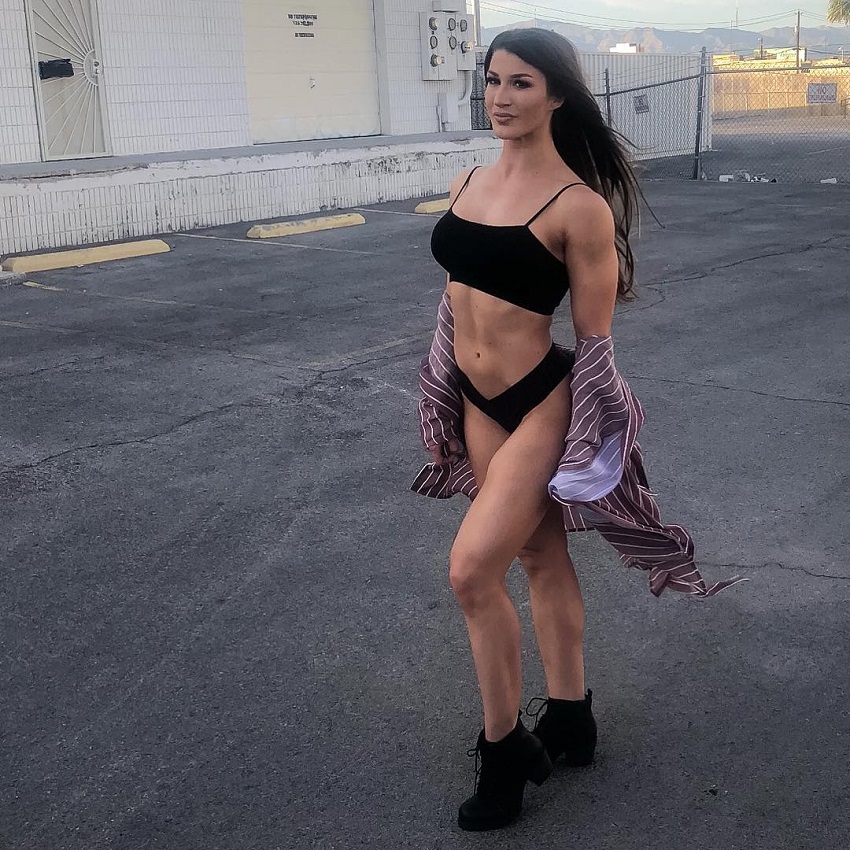 “I’ve created such an incredible circle of friends, grown emotionally and spiritually and I’m making progress towards my goals every day. I guess what I’m trying to say is that it’s okay when life throws you a curveball, whether you dodge it or get hit smack in the face with it, get back up, dust yourself off and carry on.”

Taylor Spadaccino likes to alter her workouts often. That said, one thing almost never changes – her training intensity and sheer volume of exercises. Taylor likes to do many sets and reps with each exercise, in order to maximally exhaust her muscles and ensure optimal growth.

However, even though she trains hard, Taylor also stresses the importance of rest and recovery. By giving her muscles enough time to repair, she stays strong, fit, and healthy for contests. In Taylor’s eyes, recovery is just as important as the training itself. 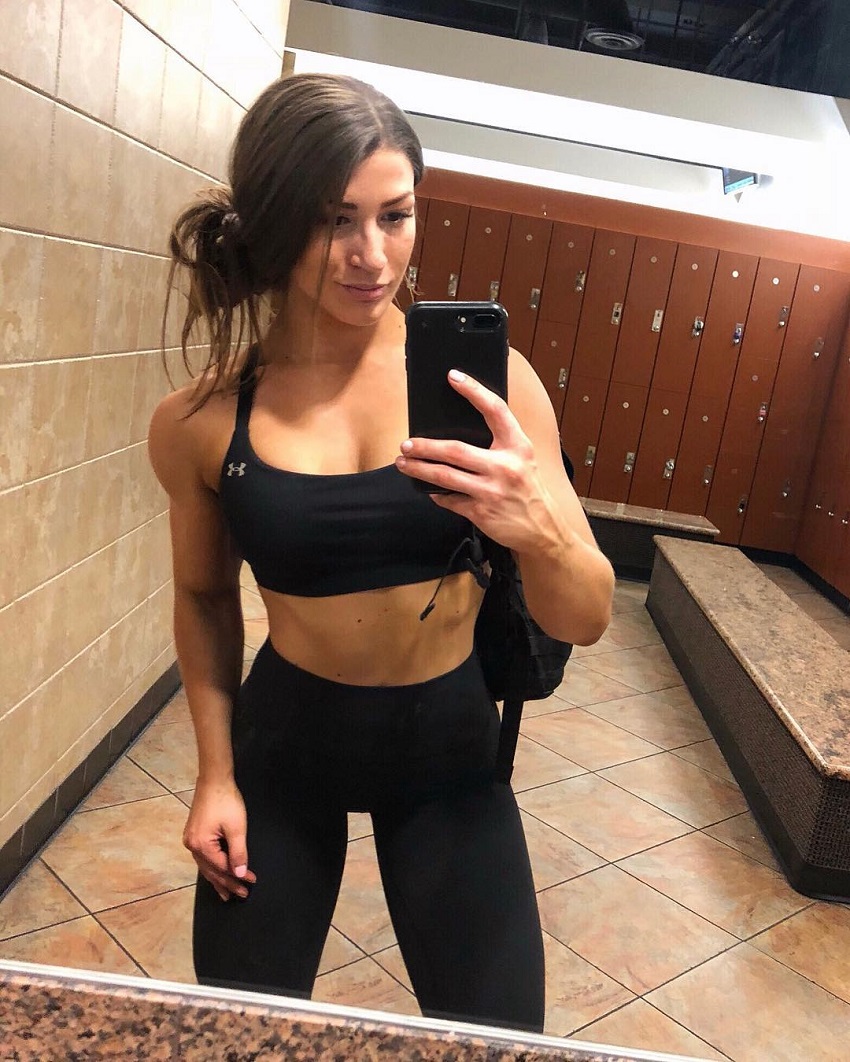 In order to stay lean for competitions, Taylor does a lot of cardio. Specifically, she’ll have two 45-minute cardio sessions 5 days per week leading up to a show.

Here’s Taylor talking about her cardio routine for contests;

I do about an hour every morning and 5 days a week I do a second 45-minute cardio session at night. It is actually much more cardio than my coach would like to have me do.

But, due to my thyroid condition (Hashimoto), it has been very difficult to bring in my conditioning. So because of this, he has had to really amp up the cardio. It’s usually the treadmill on a high incline or the stairs. I don’t see the amount of cardio really getting any higher than that.” – Taylor Spadaccino 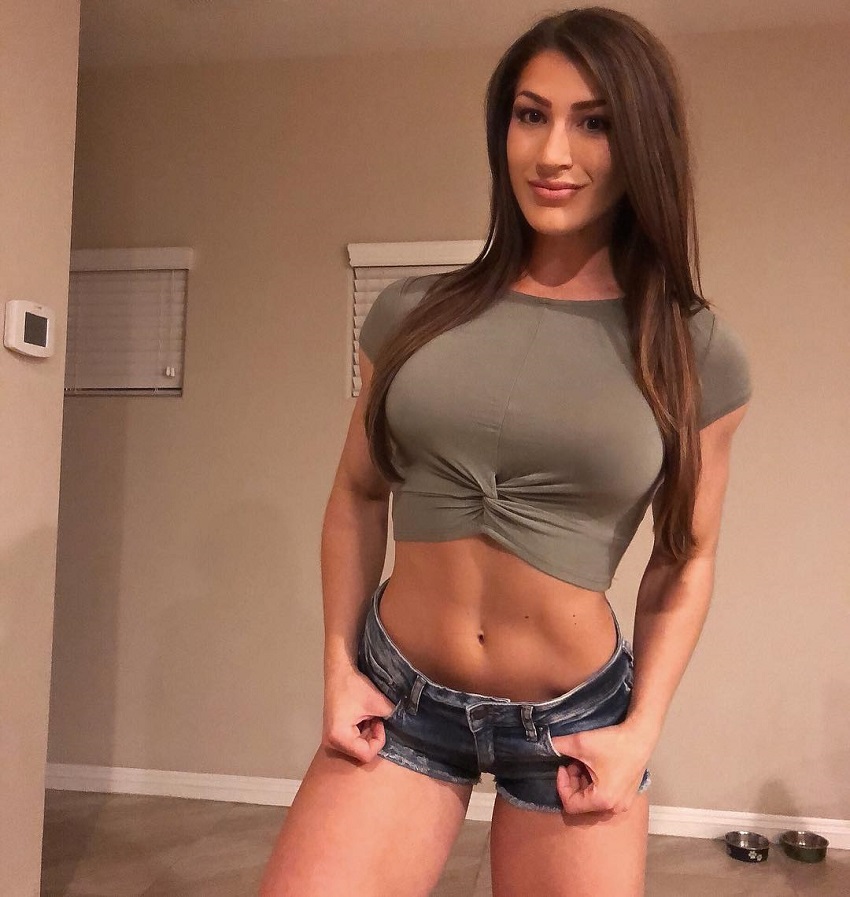 When preparing for a competition, Taylor eats a diet that’s extremely low in carbs. During this phase, she’ll only eat about 10g of carbs per day.

However, this doesn’t apply when she train legs. On leg days, Taylor will do a carb ‘refill’ to fuel her muscles with the energy needed for her demanding lower body workouts. Her favorite type of carbs are gluten-free oats, which according to her, are easier to cook than rice.

Besides carbs, Taylor eats plenty of proteins such as cod, salmon, egg whites, and lean poultry. Vegetables such as green beans, salads, and cucumbers are a must-have for Taylor. Her diet also includes “an ample amount” of hot sauces, since that’s something she can’t go without. 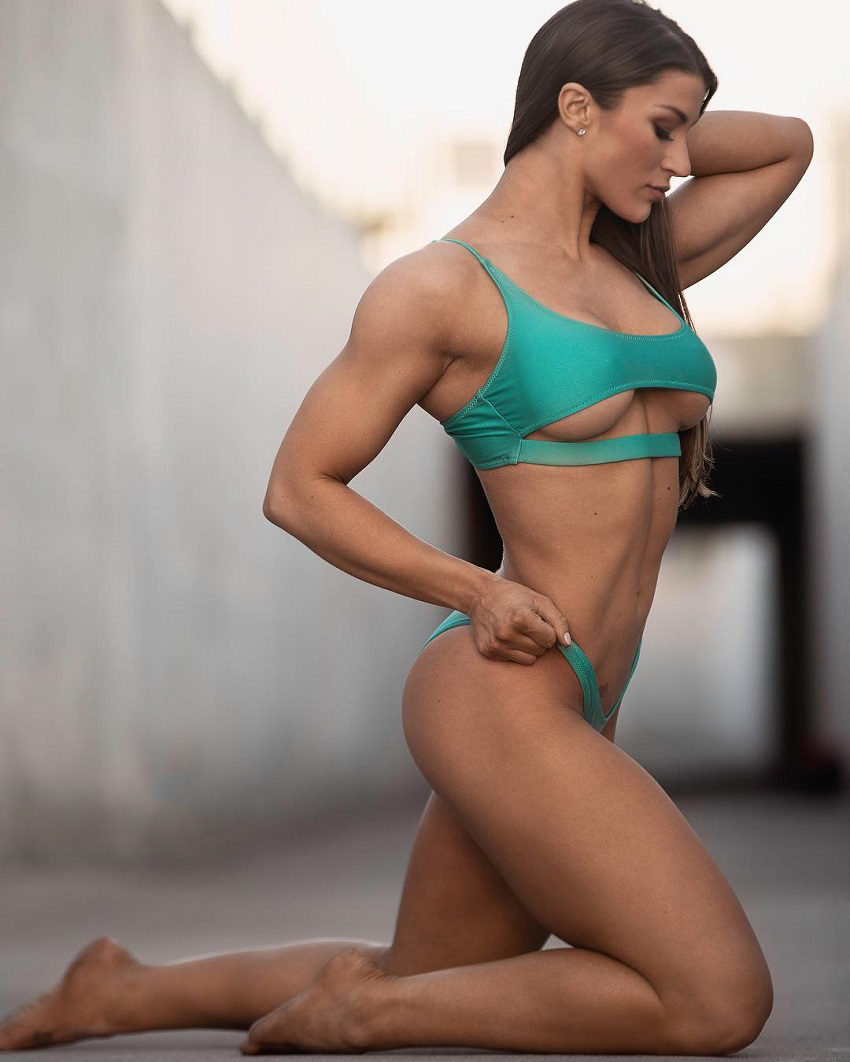 Taylor Spadaccino says that her time spent in the U.S. Marine Corps has been one of the most positive periods from her life. It has benefited her in many ways, from strengthening her mentally to taking her work ethic to a whole new level. This was something that carried over to her fitness journey later on.

Taylor is extremely grateful for the friends she met during her time in the U.S. Marine Corps, and everyone who supports her on her journey. She continues to show gratitude to everyone online by sharing her motivational posts and quotes – aiming to have a positive impact on the world. 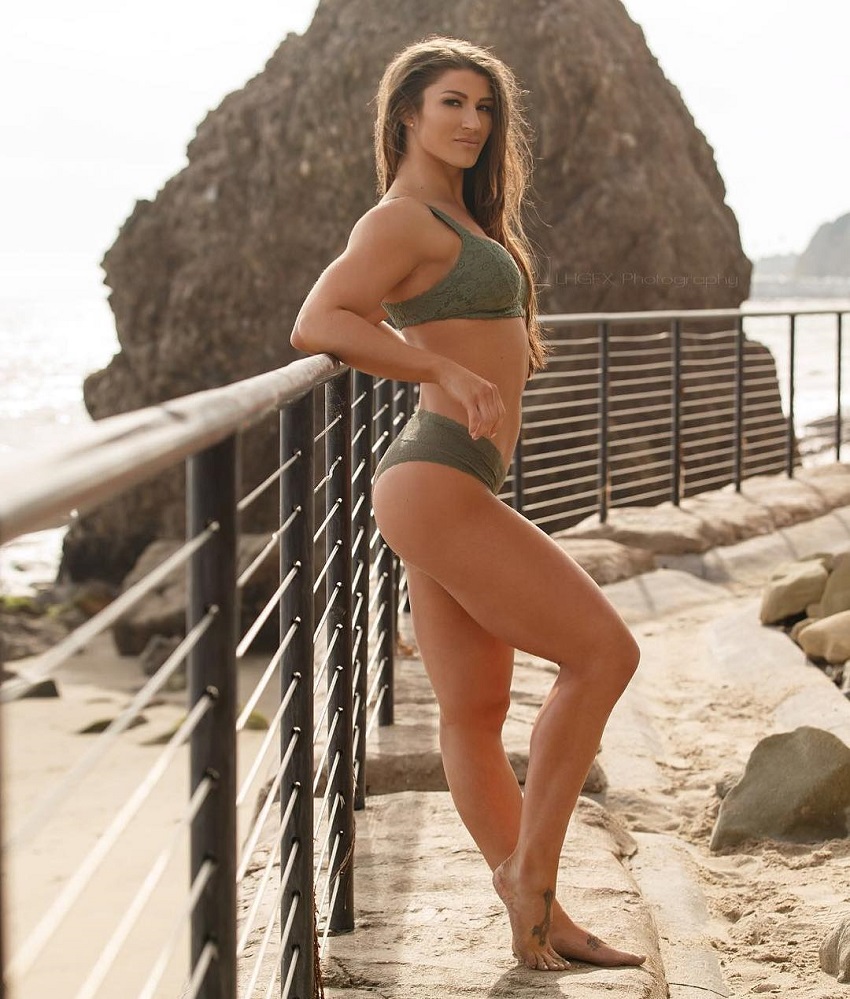 Here’s Taylor’s message for her friends in the U.S. Marine Corps:

“Dear Marine Corps,⁣
⁣
Thank you. For the discipline you’ve instilled in me. For teaching me respect not only towards myself but also towards others. For the showing me the definition of hard f*cking work. For the memories and experiences you’ve allowed me to accumulate. For introducing me to some of my best friends to this very day. For the pride I will always carry with me knowing that I served in such a badass branch. For my excessive usage of the word “fuck”. And for simply changing my life for the better. ⁣
⁣
Forever proud to be a United States Marine.⁣” – Taylor Spadaccino 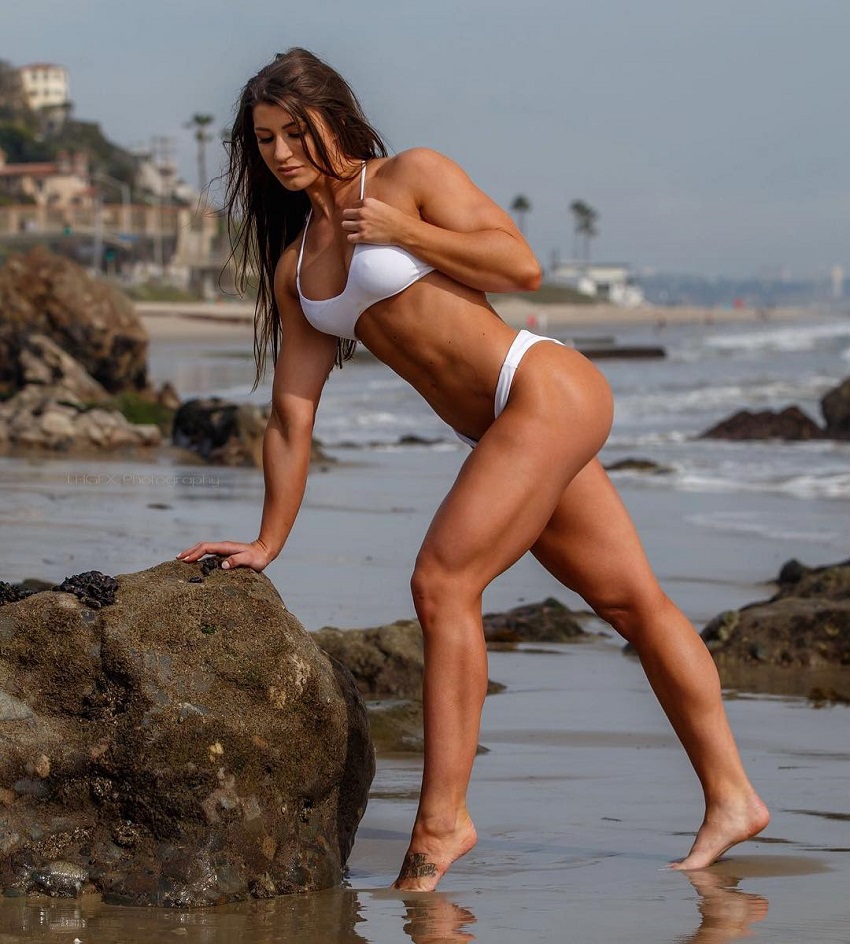 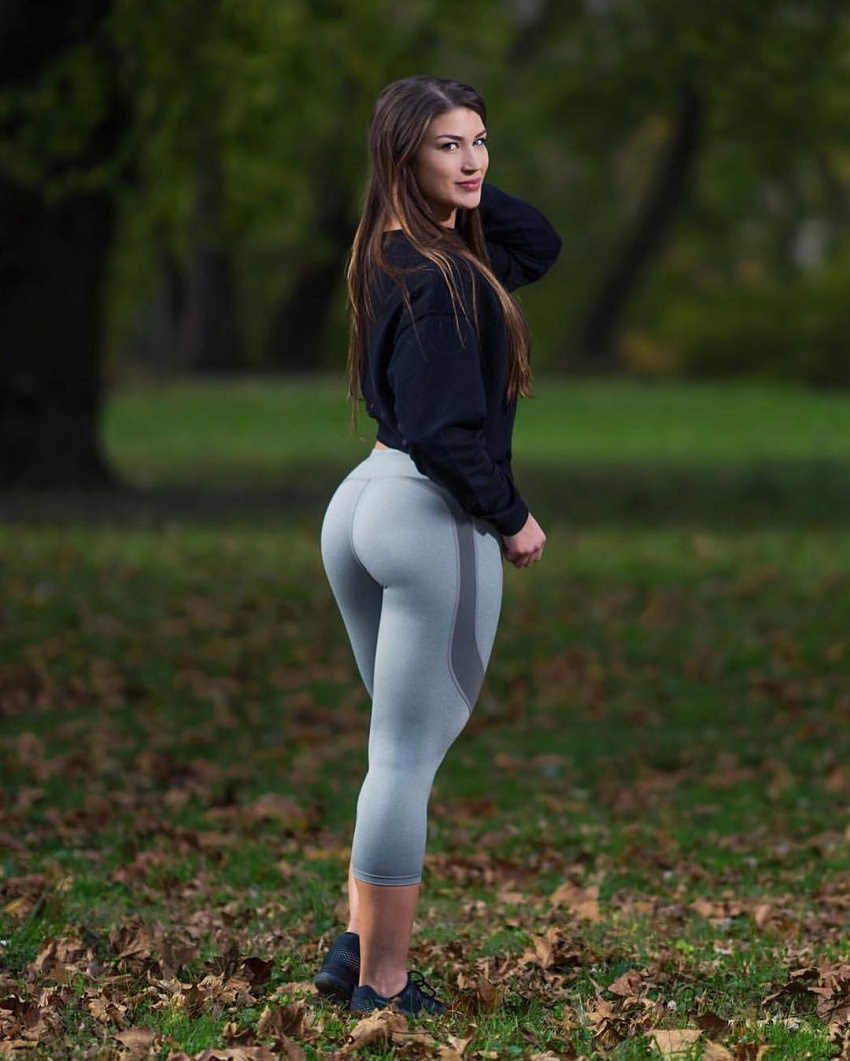 What we can learn from Taylor Spadaccino

From serving in the U.S. Marine Corps to becoming a fitness model and IFBB Figure Pro, Taylor Spadaccino has achieved success in multiple areas of her life. Yet, she still pushes for more. She continues to inspire her ever-growing number of fans to be the best they can.

If nothing else, Taylor has taught us that if you truly give ‘your all’ into something, you can achieve massive success. Keep going forward, and let no obstacle prevent you from reaching your goals – that’s something Taylor Spadaccino would tell you.

Taylor, you are absolutely gorgeous!
Very very stunning and beautiful.
God bless you for your Service to our Country.
And God bless your parents for bringing such an incredibly Gorgeous woman into this world.
Take care. Stay safe and healthy.