From a 5-year-old ballet dancer to the youngest ever IFBB Figure Olympia champion and the winner of a long list of titles. Nicole Wilkins has continued to inspire fans worldwide with her dedication to the sport of bodybuilding.

Nicole first became interested in fitness through ballet, and then gymnastics, however, she suffered a knee injury in her youth, which prevented her from competing in gymnastics.

Nicole had to go through many obstacles during her journey in becoming a champion figure competitor and bodybuilder. Overcoming her injuries and successfully competing for over a decade, she’s shown everyone just what can be achieved with determination. 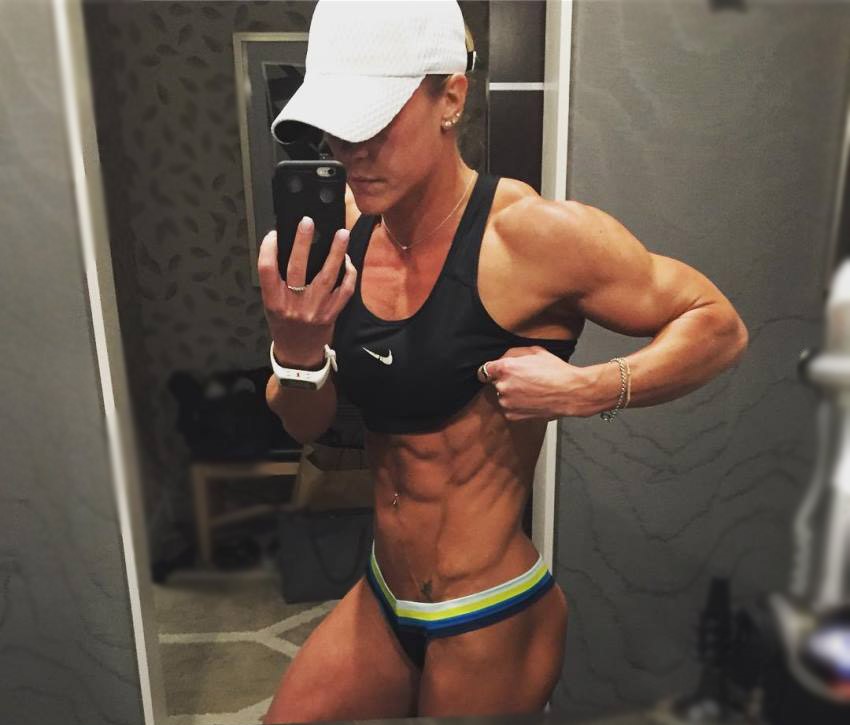 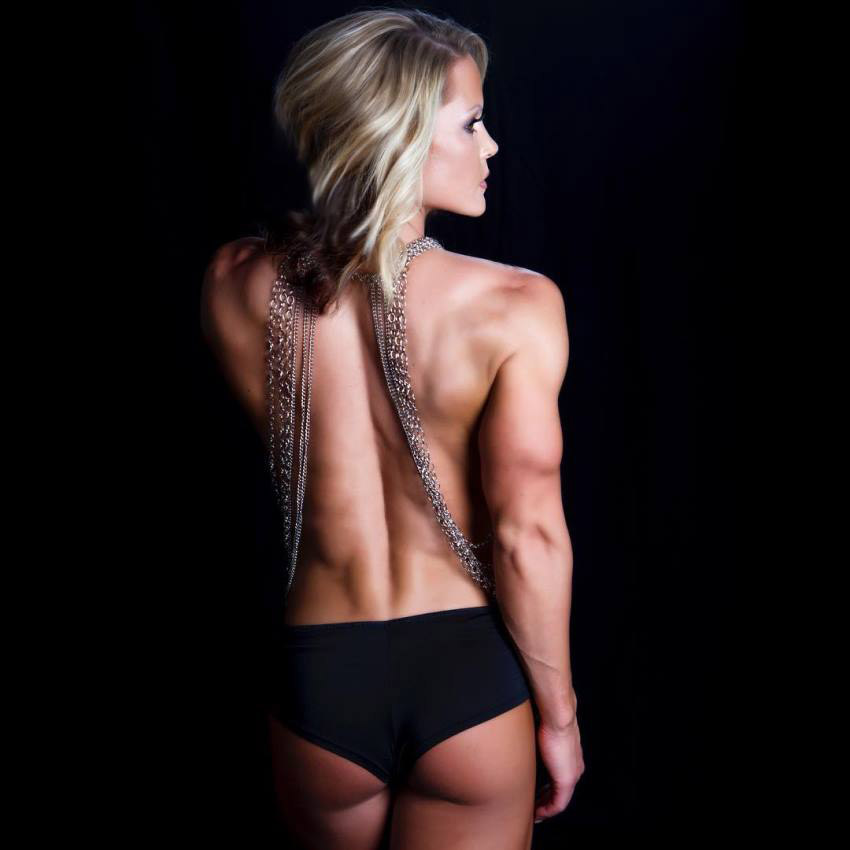 “No one but you knows how hard you work, how many hours you put in the behind the scenes, so rely on tourself for approval, not the outside world.” 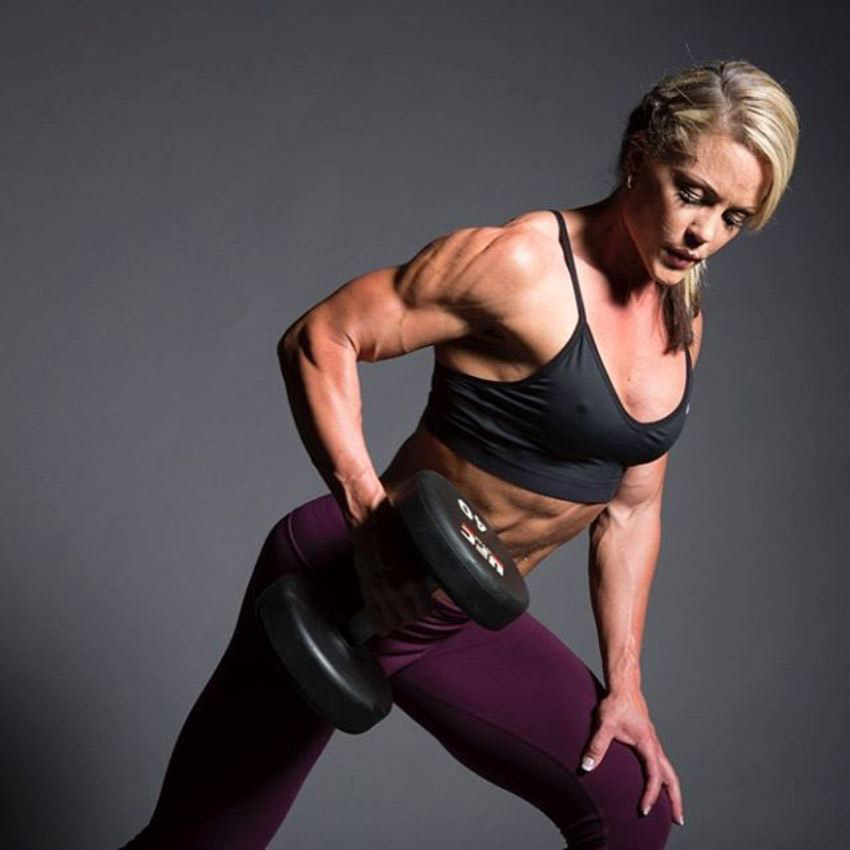 “Don’t think about what can happen in a month or a year. Focus on the 24hrs you have ahead of you and do everything you can to get closer to where you want to be.”

Nicole Wilkins was born on 5th of February, 1984, in Farmington, Michigan. Growing up, she always showed an interest in physical activity and sports, along with joining ballet classes at only 5 years old.

Nicole would often go out alone, climb trees or ride bikes, while friends her age were “playing with dolls.”

Over time, Nicole lost an interest in ballet and moved on to other activities, such as cheerleading and dancing.

At the age of 7, Nicole moved onto gymnastics and went on to compete during primary, and high school. Later on, she also competing in Track and Field.

Wilkins continued taking part in Track and Field and gymnastics for several years. However, by the time she was 15, Nicole suffered from an unforeseeable accident. Nicole tore the medial meniscus in her left knee and was in need of immediate surgery.

According to her, it was at that point she suspected her gymnastics career was over. She said the uncertainty of what would happen after the surgery frustrated her, as gymnastics was her main passion.

At the time of her accident, the doctors decided they wouldn’t remove the torn cartilage, but rather stitch the injured area.

After spending over six weeks on crutches, Nicole started walking normally and hoped the injury wouldn’t return. However, after one year of strenuous activities since the accident, the injury returned. This time, the tear was even worse than before. She said; ” I was finally back to normal … at least I thought. I was wrong.”

Life After the Injury

After suffering the same injury twice, Nicole realized she needed to move forward and find another activity, this is when she started going to the gym to help with recovery.

Nicole was still doing gymnastics, even though she couldn’t do the same activities as before, such as training on parallel bars. Nicole had to adapt to a completely new style of training. The sessions lasted for several hours, and during the last stages of the activities, she would switch to strength training instead of gymnastics.

Nicole continued working out for several months and soon started to see noticeable changes in her upper body. Nicole never thought she’d be able to transform her physique in just a few months.

Nicole says she immediately “fell in love” with the sport, and soon started replacing gymnastics with strength training. After her knee was completely recovered, Nicole found a coach who taught her how to squat, dead-lift, and power clean to avoid further injuries. After that point, she was even more “hooked” to the new lifestyle. 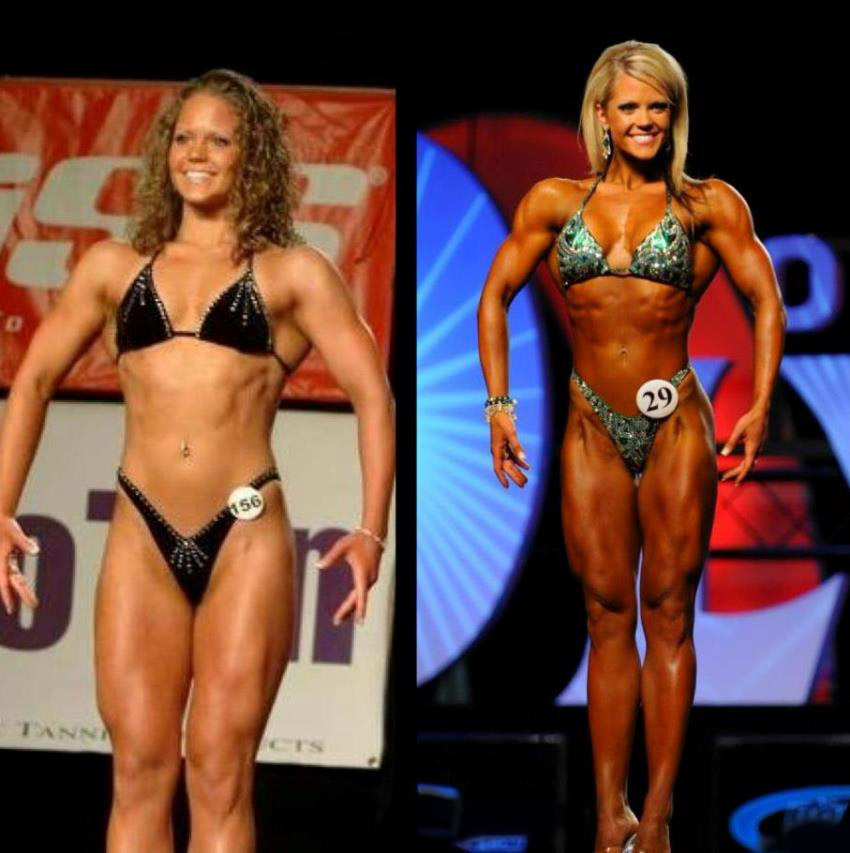 Even though Nicole started paying more attention to her strength training than gymnastics, she was still passionate about her first discipline and decided to try one last time and compete at the 2002 Gymnastics Arnold Classic Sports Festival, held in Columbus, Ohio,

After the competition, Wilkins realized she lost the passion for gymnastics she once had, and decided she’d retire from gymnastics, and by the time she entered college, she completely abandoned gymnastics altogether.

As a past-time, Nicole started going to various fitness competitions as a spectator and became amazed by the physiques she saw on stage and said; “I knew that one day I wanted to compete on that stage. In my heart, I knew I would be there one day – I just didn’t know where to start.”

After a few years of hard work and dedication, Nicole decided she would compete in a fitness show – With the help of her best friend who was a professional dancer and choreographer, she started her preparations and practiced different styles of posing routines.

Nicole stepped on stage for the first time in the November 2003. Needless to say, her hard work and dedication paid off. She won the competition, and said, it was at this point she had found her real passion.

“I won. But more than that, I knew I had found my passion.”

Wilkins continued to train with more intensity than before, motivated to win even more competitions. She started off by competing in local and regional shows, and because of her results, she moved on to the national level.

Over the course of 4 years, Nicole competed in several more regional and national shows. She took home 2nd place at the 2006 NPC Junior Fitness Nationals.

In 2007, she stepped on stage and won the NPC Figure Nationals, and for the second time in a row, the American competitor managed won both tall class and overall – this is where she earned her Pro card.

Nicole was also the first competitor in the history of a national-level contest who successfully won both Figure and Fitness overall titles. Needless to say, Nicole proved to herself she was a Pro competitor, and continued training for more upcoming competitions. 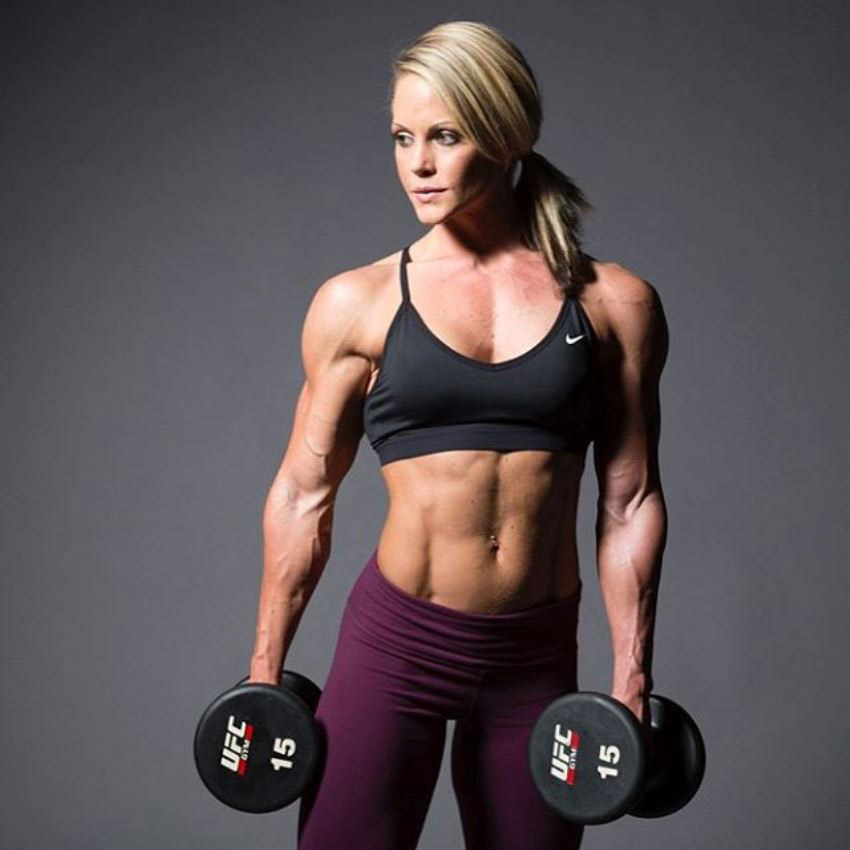 The results didn’t discourage Nicole, as she made a comeback in 2009. Wilkins started off the year by placing 4th at the IFBB New York Pro Fitness, and only a few months after the event, she took home 1st place at the IFBB Europa Show of Champions.

Several months after, she won the IFBB New York Pro, then started preparing for the upcoming Olympia. Nicole said she was more determined than ever to win the Olympia for the first time.

In 2009, Nicole stepped on the stage and took home 1st place. It was at this point she became the youngest competitor to win the Figure Olympia. For the next several years, Wilkins continued her dominance by winning 3 more figure Olympias, among other prestigious competitions, cementing her place as one of the most iconic fitness icons in the history of bodybuilding. 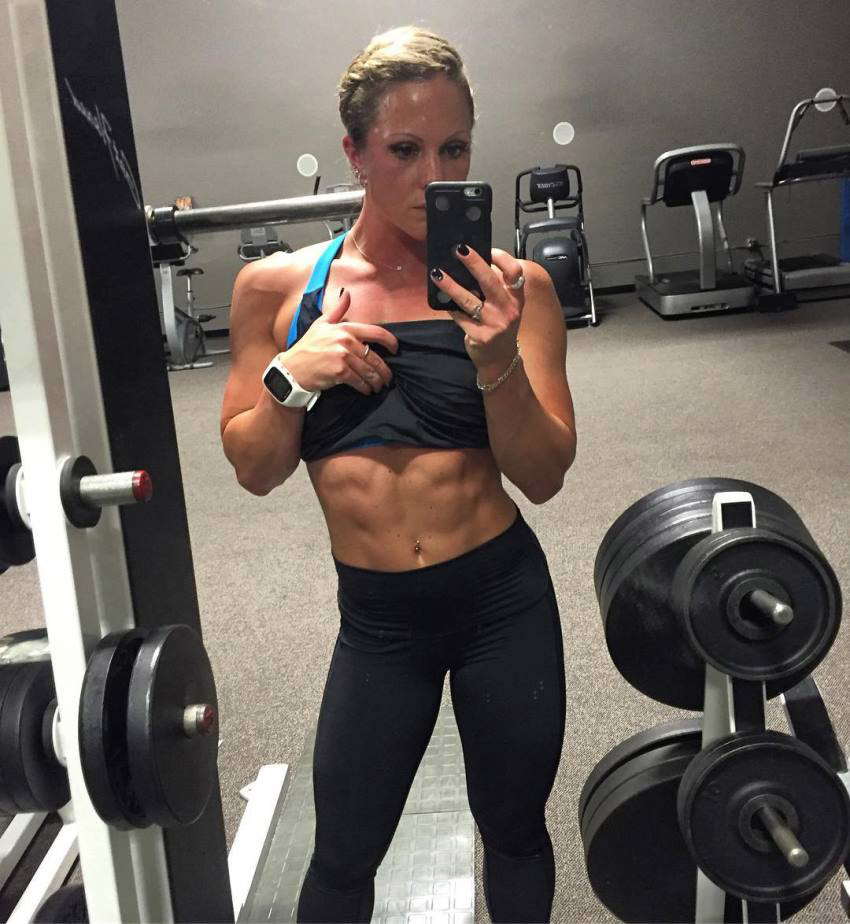 “Being weak is a choice.”

When it comes to her training regimen, Wilkins is an advocate of short, but intense training sessions. Nicole’s workouts last for about an hour, with high volume and low rest periods. She occasionally switches to heavy weight and longer resting periods, stating the importance of rotating workouts to increase growth.

Nicole usually trains 5-6 days per week, depending on her conditioning, diet, and other factors. In terms of cardio, she does it separately from her strength training workouts as she feels that doing cardio takes away a lot of her energy that she could use for mass-building.

For her cardio sessions, Nicole likes to vary High-Intensity Interval Training with sprinting or cycling.

“I think if you are performing an exercise properly, seeing progress, and you enjoy doing it, why not use it?”

Known for her impressive glute development, Nicole, says both lunges and squats are vital for overall leg and glutes development, “but they are not enough by themselves” says Nicole.

She says the glutes are tricky to hit from all the possible angles, but stresses the importance of it if she wants to have an all-around great physique.

She said that when doing compound movements such as deadlifts or squats, she can build her lower body mass, but in order for her to properly develop gluteus maximus, she uses isolation exercises.

Even though Nicole stresses the importance of changing her workouts, her usual split workout can be seen below: 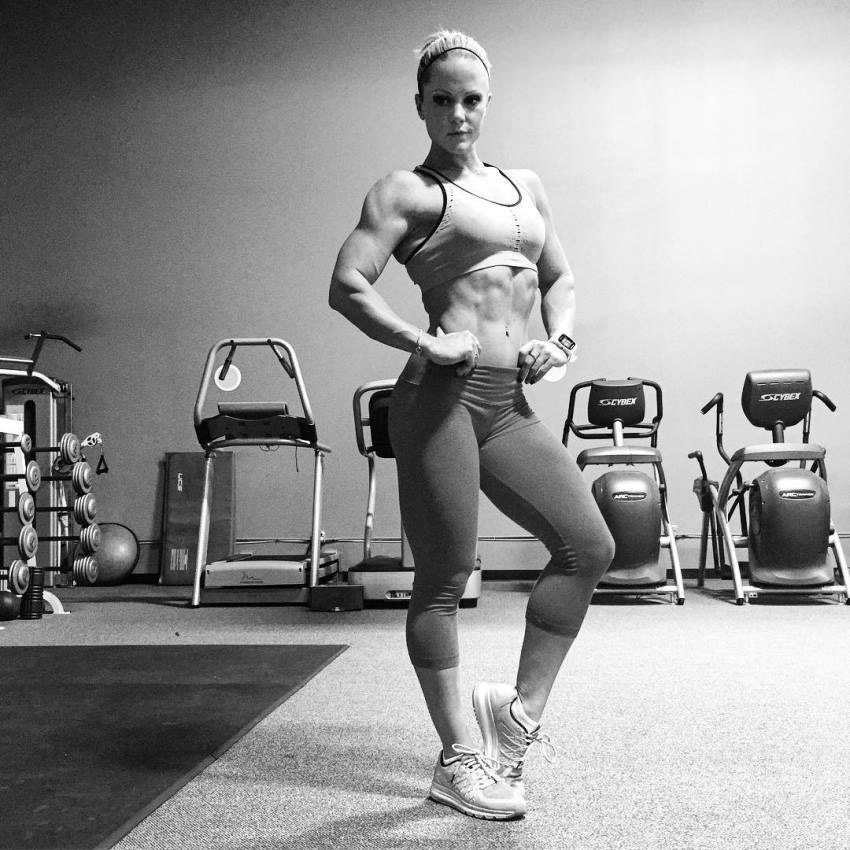 “write your own rules on how your build your body.”

When it comes to her eating habits, Nicole is strict with no matter if she is preparing for a competition or if she’s in the off-season. According to her, she likes to stay lean and healthy throughout the whole year and during the off-season.

She increases the number of calories she consumes in her mass-building phases, by incorporating more fruits and dairy.

Nicole’s favorite healthy foods are oatmeal or grilled salmon, and her favorite cheat food is any Mexican dish and sweet-potato fries. She stresses that she doesn’t eat cheat meals often, especially when dieting for a competition. Her estimation is 1 cheat meal every 3 weeks.

This is what Nicole’s diet looks when she is preparing for competition:

Nicole’s supplementation philosophy is similar to other successful athletes’ – She uses pre-workouts during the time of preparation for competitions and cycles them in the off-season. She’s also a believer in supplementation as a way to aid muscle recovery and promote lean muscle mass. 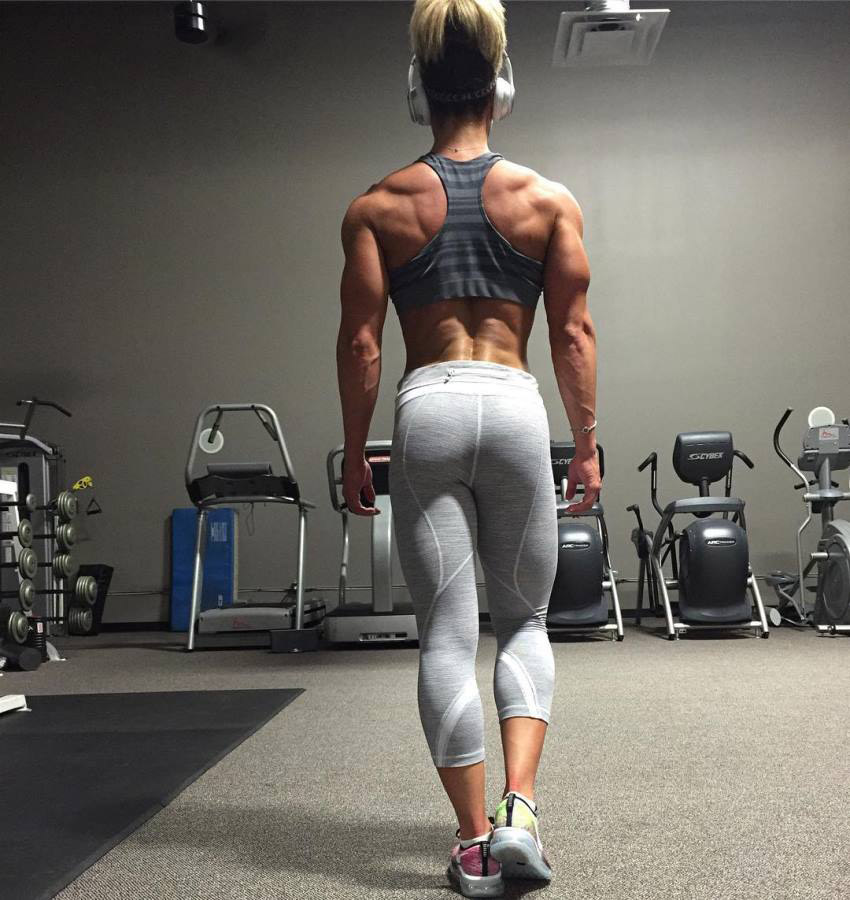 “Almost every successful person begins with two beliefs: The future can be better than the present. And I have the power to make it so.”

Nicole has been an idol and inspiration to people the world over. Her determination and willpower she had from the beginning, and winning many titles, along with being featured in over 18 magazines makes Nicole an idol and influence to everyone interested in fitness. 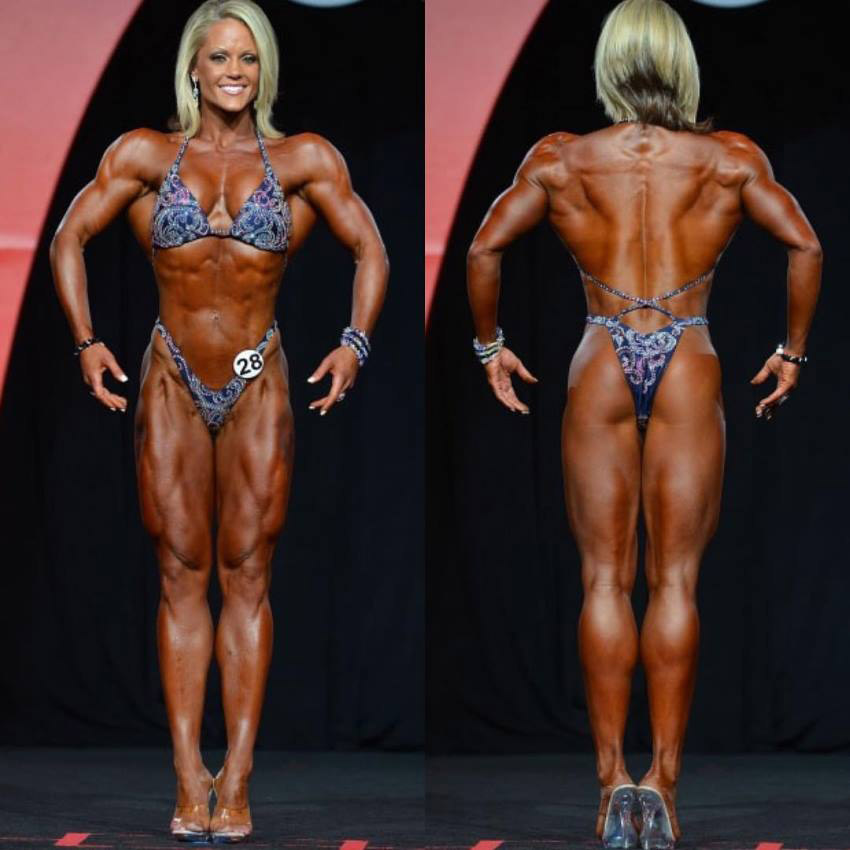 “Forget Skinny. Do work. Get fit.”

What we can learn from Nicole Wilkins

Ever since she was a child, Nicole was competitive and had a burning desire for victory. Competitiveness is part of who Nicole is, and that’s one of the reasons why she managed to win so many shows and along with many other awards and recognitions.

Willpower and determination are two main traits we can learn from Nicole, not giving up when it’s tough, and having enough courage to plan big. By doing so, and by visualizing your path and the end goal, you too could achieve your own physique of greatness, just like Nicole.

[…] of Frida’s biggest influences is Nicole Wilkins. Frida says that Nicole is one of the reasons why she started competing in the first […]

Great article …. my friend Sandra is doing your transformation and she just loves it. On a side note, I noticed you did not have a whey protein isolate as part of the arsenal and I was wondering why? I consider it one of the most useful supplements. Thank you so much and all the best
Ahimsa
jer