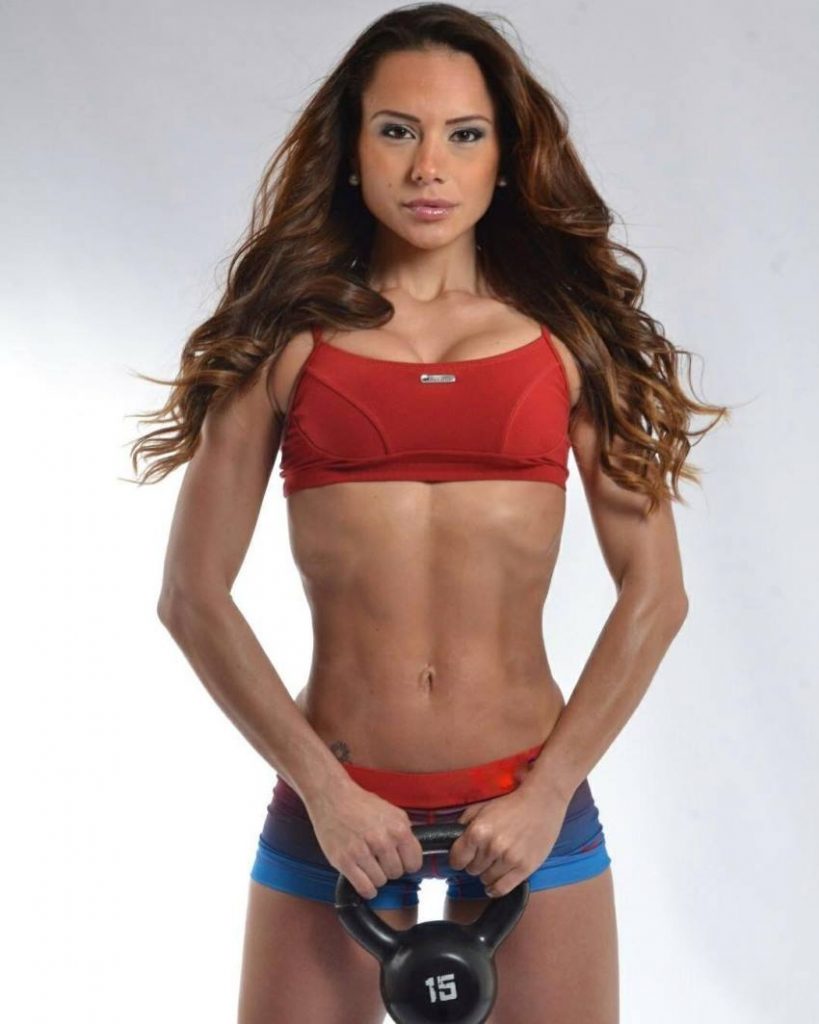 Growing up, Nathalia was health-conscious and active. However, after moving to the United States in 2004, she adopted a sedentary lifestyle which saw her health deteriorate.

As Nathalia’s numbers on the weight scale continued to rise, she began to realize it was time to make a change. She went on to sign up for her first bikini competition, and she hasn’t looked back since.

Throughout her competition preparations, Nathalia changed her eating habits, and lifestyle for the better – something that helped her set the basis for what would become an accomplished career in fitness modeling and competitions. 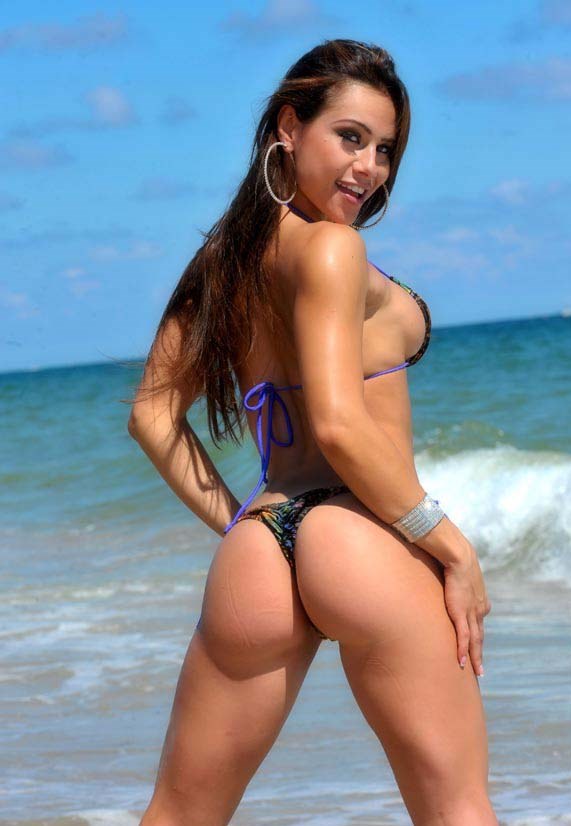 “Training has always allowed me to remind myself of who I am and what I like. It gives structure to my day and a sense of accomplishment. I have been training for years, and I have always enjoyed how being active makes me feel.” 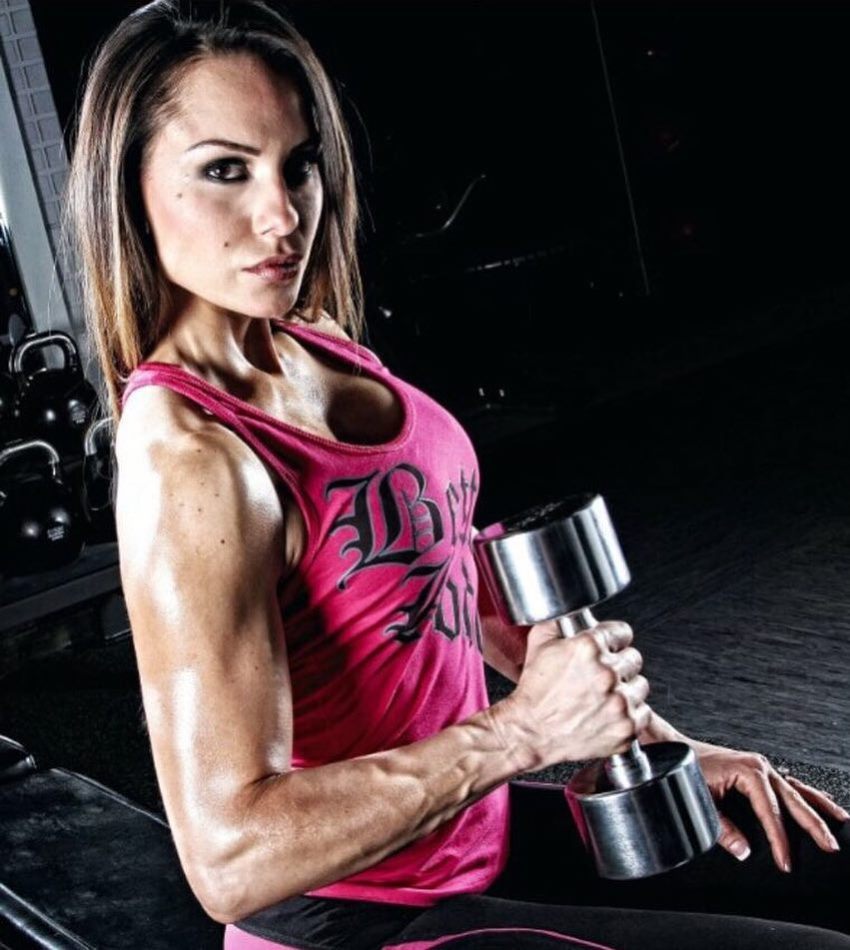 “You are going to be in your skin for a long time, you might as well get comfortable in it and enjoy what you have.” 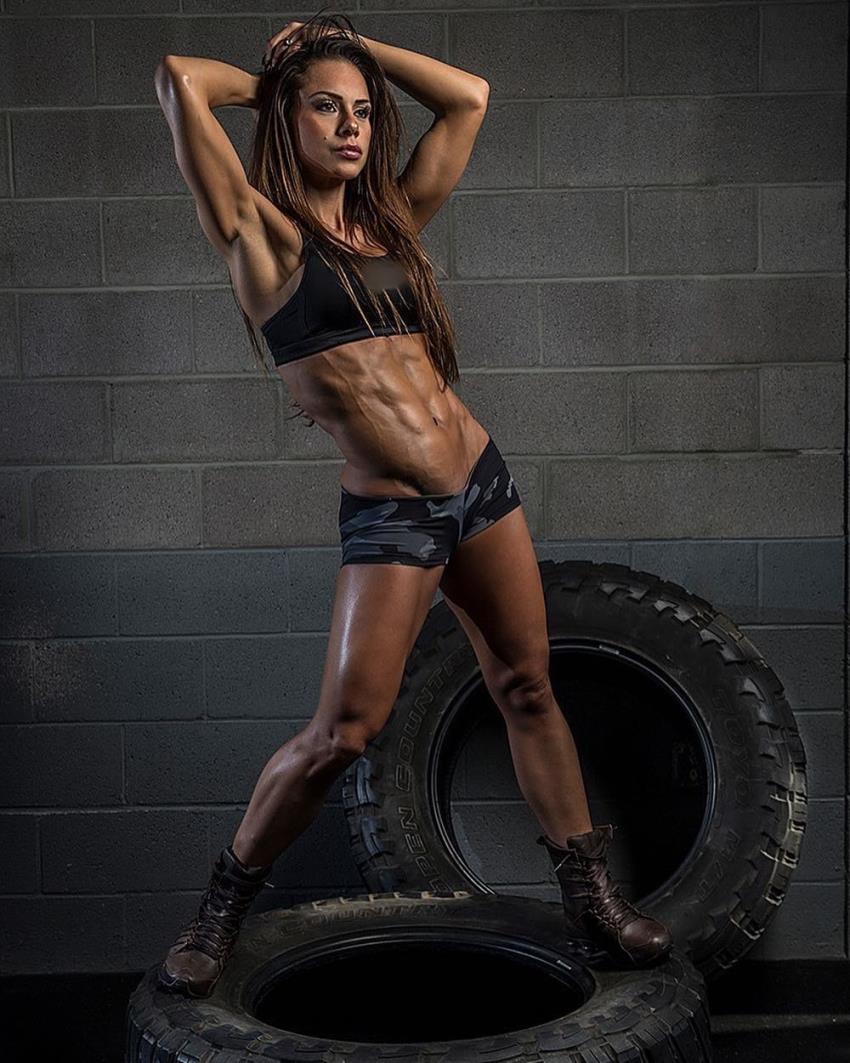 “I am an all or nothing type of person and every prep I did, I gave my absolute all to every single workout, every meal and every cardio session. I never stepped on stage thinking I could have done more during prep.”

Nathalia Melo was born and raised in Brazil, and of Italian descent. However, in 2004, she permanently moved to the United States where she’s lived ever since.

While Nathalia is well-known for her active and healthy lifestyle, this wasn’t always the case. During her first few years in America, she became caught up in unhealthy habits. Including overeating, and leading a sedentary life.

All of this greatly affected Nathalia’s mood and well-being; she became frustrated with her situation.

Changing For the Positive

Then, in 2009, Nathalia decided it was time to take control of her life. She went on to challenge herself by signing up for her first bikini competition. She hoped by doing this, she would be impelled to follow a healthy meal plan, alongside a strength training regimen.

Nathalia’s plan was successful – within a month, she cut out all of the ‘junk’ food she previously ate, alongside creating an effective workout routine.

After a few months, the show day came. Nathalia says she was already proud of herself; mainly because she took so much effort in changing her lifestyle. But, things turned even better for Nathalia.

In her debut competition, Nathalia edged out all of the other female competitors; claiming the 1st place and the overall bikini champion trophy in the Mr. Olympia, IFBB Bikini competition. 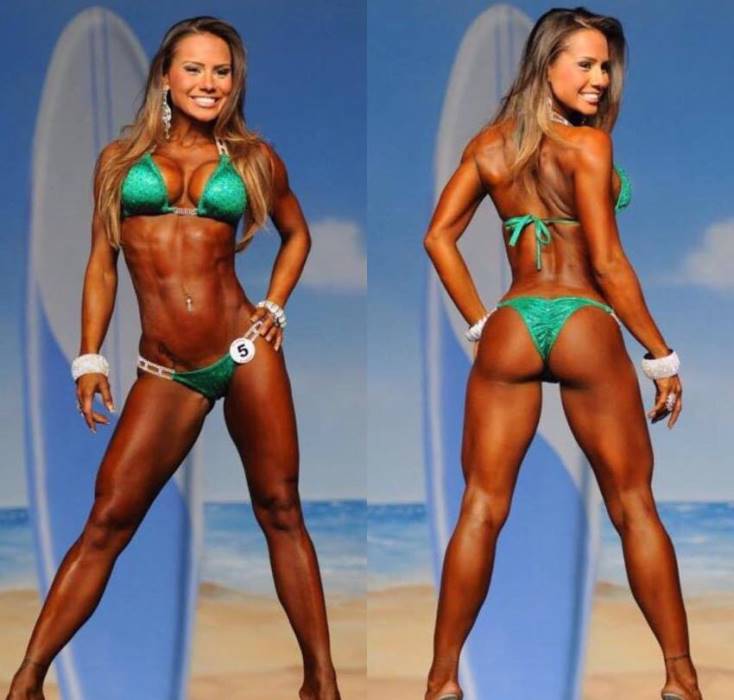 Needless to say, Nathalia was extremely happy about her victory. However, this was just the beginning of her rise to the top.

Over the course of the few months, Nathalia began working with high-profile fitness companies; growing her presence within the industry of competitions and fitness modeling.

In 2012, Nathalia’s career reached its peak. That year, she won the most prestigious female competition in the world – the Ms. Bikini Olympia. The victory saw Nathalia become the first Brazilian to ever win this competition.

Furthermore, as a result of her victory, Nathalia was invited to participate at the Arnold Sports Festival on several occasions – each time, finishing in the top 5.

Nowadays, Nathalia is a certified personal trainer, as well as sports nutrition expert.

She doesn’t compete anymore, mainly due to her business and family responsibilities. Nathalia said, “I don’t think it would be fair on my family to not have me 100% there, especially with 2 babies. I know I would be setting myself to have far more than I can handle.”

However, she’s now able to dedicate more of her time to helping others; putting her expertise and knowledge about nutrition, supplementation, and exercise to good use. 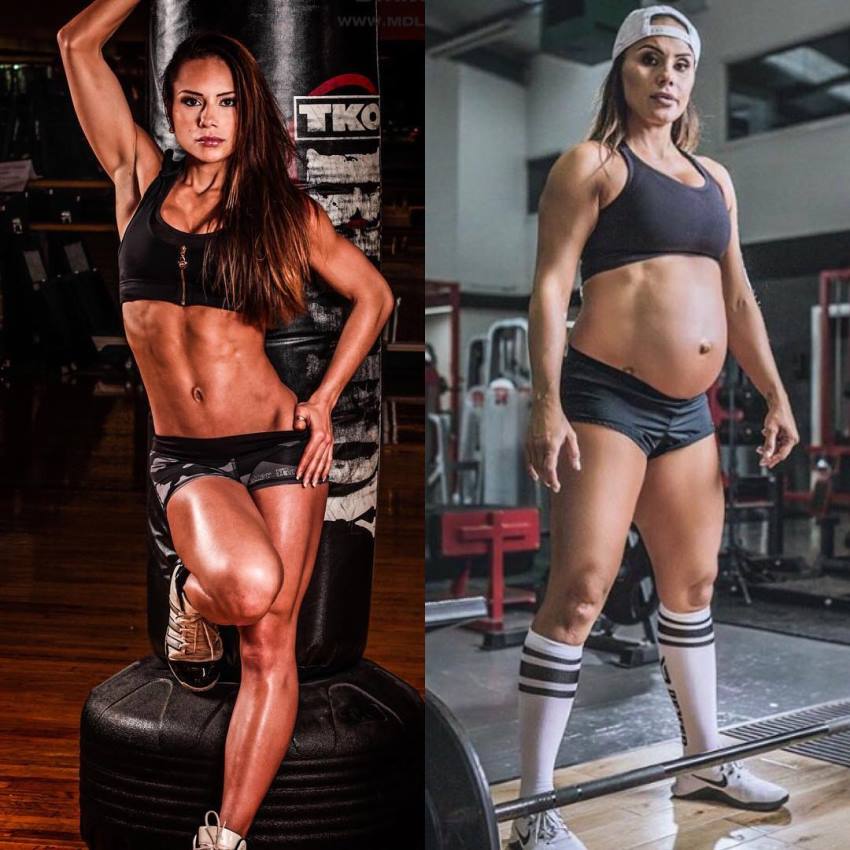 Nathalia Melo before, and during her pregnancy.

“You know what is the best exercise in the world and the one that will give you the best results? The one you enjoy and will be consistent with! Regardless of what anyone says.

If you don’t enjoy something, chances are you won’t stick around. So, find something you enjoy and the results will come! The key is to keep on moving.”

Even in the off-season, Nathalia does cardio five to six times per week. Each of her cardio sessions lasts from 45 to 60 minutes.

However, when getting ready for a contest, Nathalia will take her cardio routine to a whole another level – doing it twice per day, every day, for about 60 minutes.

On top of this, Nathalia also trains in the gym for up to two hours a day.

Depending on the circumstances, Nathalia might train anywhere from four to seven days per week. However, her typical workout plan consists of a five day-split, and it looks like this; 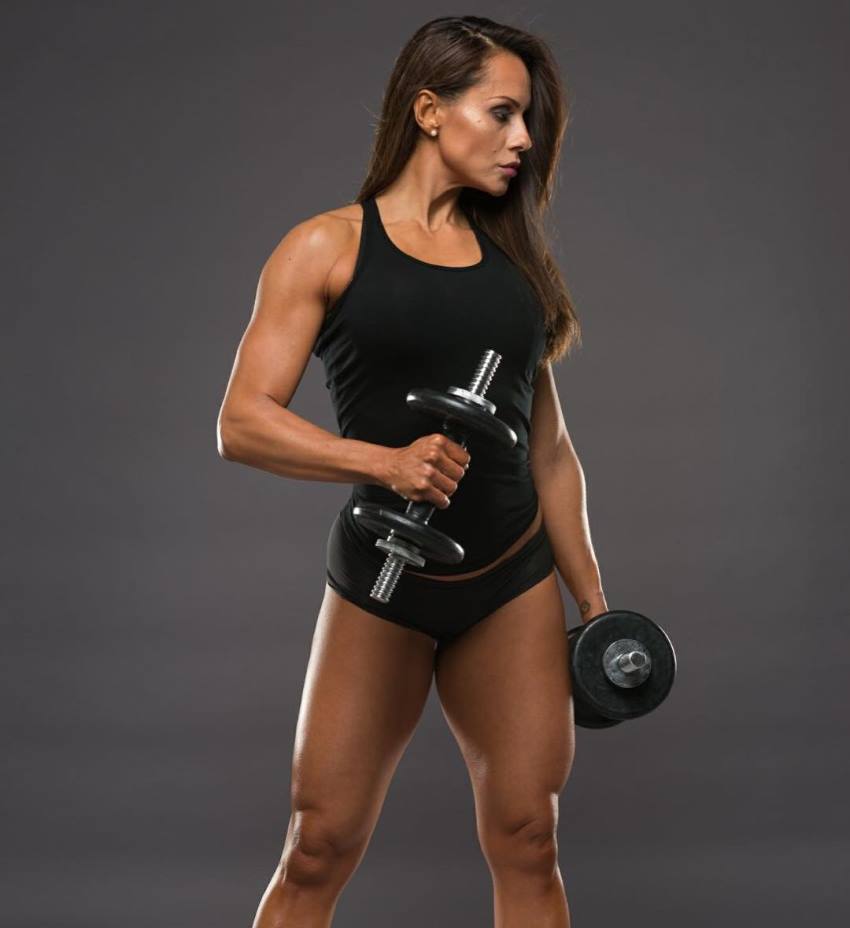 Nathalia is known for her firm and round glutes, which are the result of consistent training and incorporation of some unconventional exercises.

When working on this body part, Nathalia likes to go for a higher number of reps. She also adds a lot of volume to maximize muscle teardown from the workout.

Here’s an overview of the workout, with a detailed explanation of how Nathalia does each exercise below;

Leg-curl butt-blaster is one of Nathalia’s favorite movements for targeting the glutes. Throughout the exercise, Nathalia makes sure to keep her core stable; not letting her back sag as she lifts her leg.

Before beginning the exercise, Nathalia makes sure she’s in the correct position. Facing the leg curl machine away, she gets on all fours in front of it. After this, she proceeds to place her heel on the pad which she then pushes up while keeping her knee slightly bent.

Nathalia then slowly returns to the starting position without touching the stack. Keeping her back flat and her neck in line with her spine, she repeats the desired number of reps, and then proceeds to do the movement with another leg. 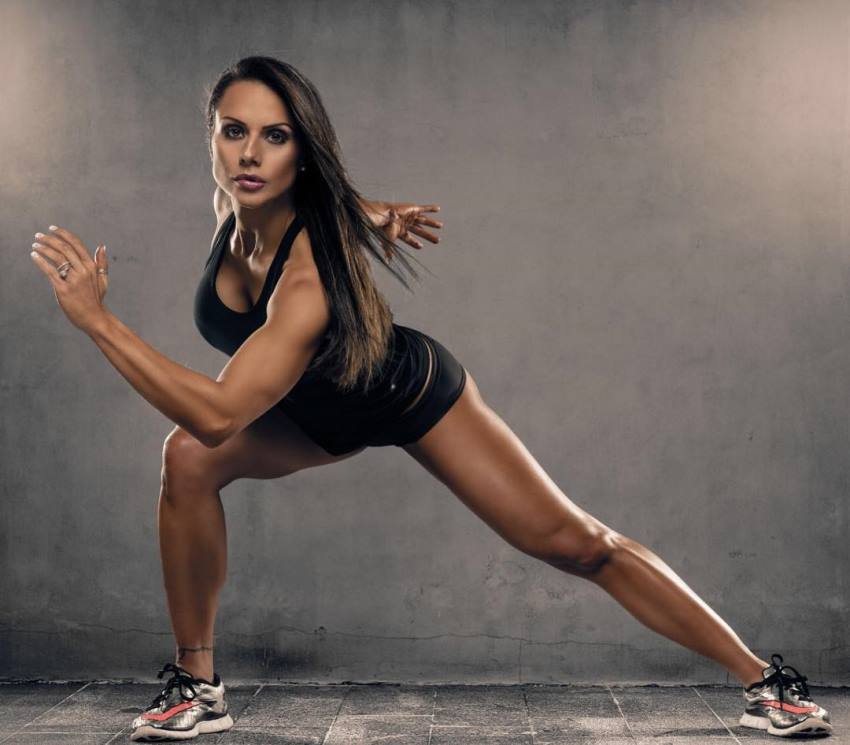 This compound exercise allows Nathalia to hit three different muscle groups – legs, glutes, and back. Depending on how far back she pushes her hips and goes past parallel, she’ll either emphasize her legs, or glutes.

Nathalia advises practicing this movement with no weight in order to adopt the perfect form. Only after the form is perfected, she suggests moving onto bigger weights.

As for the exercise itself, Nathalia first sets two benches up to stand next to each other. She then stands on them erect with her foot on one of the benches, having her toes pointed outward. Holding one side of a dumbbell in front of her, Nathalia slowly bends her knees and lowers into a typical squat position.

She then lowers her chest parallel to the floor while keeping her lower back arched and her abs tight; at the same time, pushing through her heels and straightening her legs. She then returns to the starting position, and repeats the movement for 15 reps.

According to Nathalia, a solid technique is crucial for yielding the full benefits of this exercise. In order to maximize glute involvement, Nathalia keeps her weight shifted on one of her legs that’s placed on the floor.

However, she says this can be challenging for some. Therefore, she advises bracing the Bosu ball against an object or surface so that it doesn’t slide around during the exercise.

Nathalia begins the exercise standing tall with her right foot placed on the center of the Bosu ball, and her left foot on the floor. She adjusts her stance to have her palms clasped, arms in front of her, and her feet pointed outward.

After this, Nathalia squats down by bending her knees and pushing her hips back; all while keeping her heels pressed on the Bosu ball and the floor. She keeps her lower back flat as she descends down until her thighs are parallel to the floor. At this point, she pauses for a second, then slowly goes back up.

She then repeats the process for reps, before moving onto her left leg. 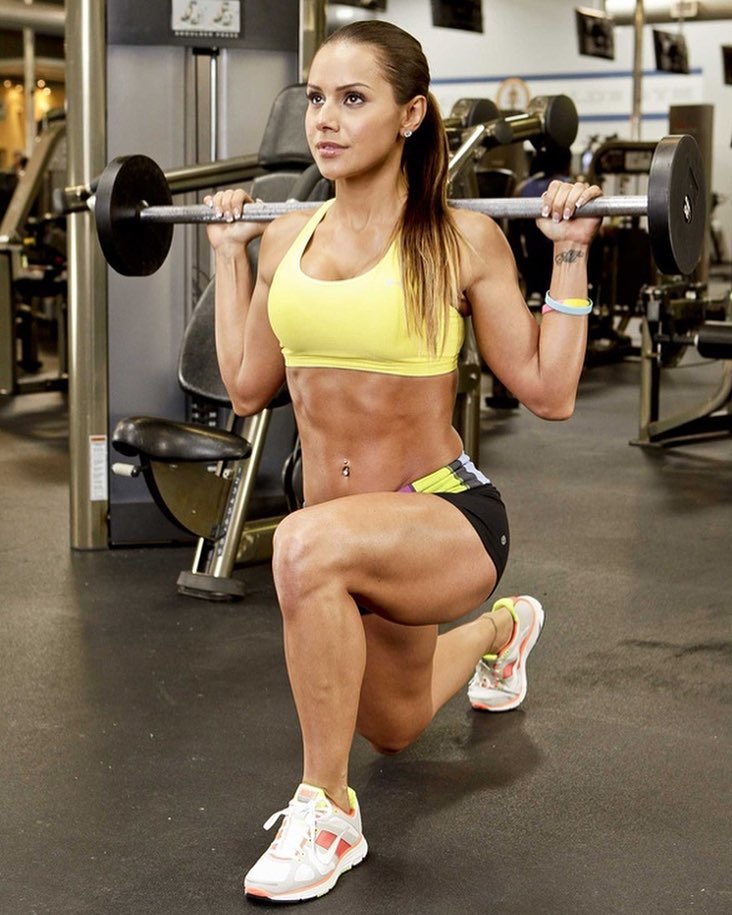 While this exercise is simple, it gives Nathalia tremendous results in both her glute, and leg development. The ‘trick’ lies in the way Nathalia pushes her heels through the bench, alongside squeezing her glutes as hard as she can at the top.

Like always, Nathalia first adjusts her posture before beginning the exercise. She stands on one side of the bench, having her arms straight in front of her with her palms facing down. She keeps her shoulders relaxed, and chest out.

Once she’s fully set up, Nathalia will place her foot on top of the bench; using it to lift her entire body weight. She squeezes her hamstrings and glutes at the top, while holding her other leg slightly in front of her and up in the air.

She then slowly lowers her weight back to the floor, pausing for a second, and moving into the next repetition. Once she’s completed all the reps, she’ll repeat the process with her other leg.

Nathalia has found this exercise to work her muscles just like the deadlift. However, the biggest mistake she’s noticed is that many people worry about lifting too much weight. This, in turn, results in fast and uncontrollable movements which can only lead to an injury. She advises going for slow and controlled movements, even if that means sacrificing the weight.

Nathalia prepares for the exercise by standing with her feet a bit wider than shoulder-width apart, having her toes pointed outward. She holds a dumbbell with both hands in front of her, and her arms in front of her legs.

With her back flat, Nathalia leans forward and bends her knees slightly to push the dumbbell between the legs. She then presses through her heels in order to return to the standing position; squeezing her glutes as she raises the weight back up.

Nathalia then repeats the movement all over again for the desired number of reps. 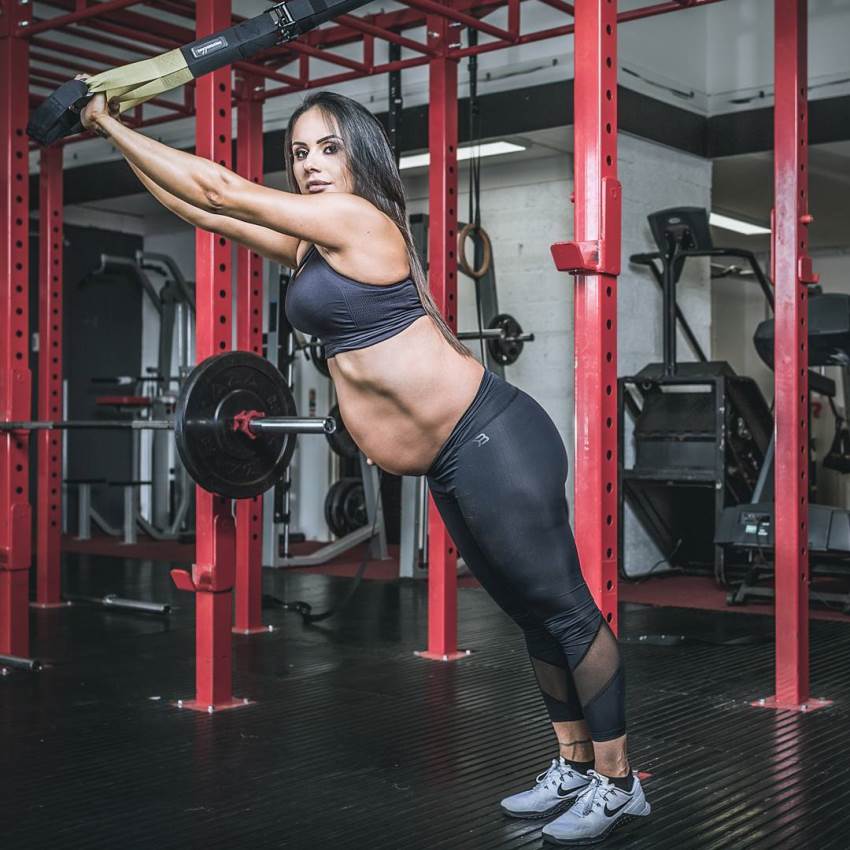 Eating Before a Competition

Nathalia sticks to her own cooked foods when preparing for a competition. She eats about six meals per day during this period.

Her favorite foods for fat loss and building muscle are chicken, asparagus, and oatmeal.

As for cheat meals, there is no room for them in Nathalia’s diet when preparing for a show. She says she saves those for after the show; rewarding herself for her hard work.

Nathalia has several meal plan variations. This is one of them; 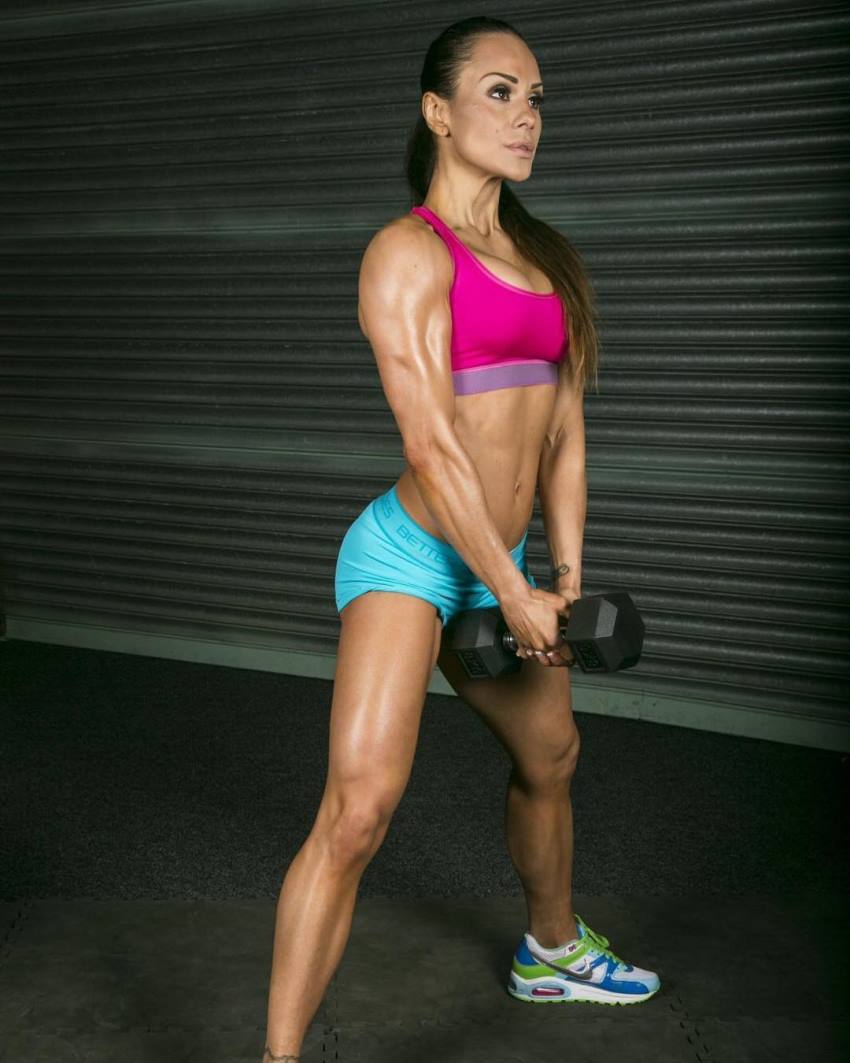 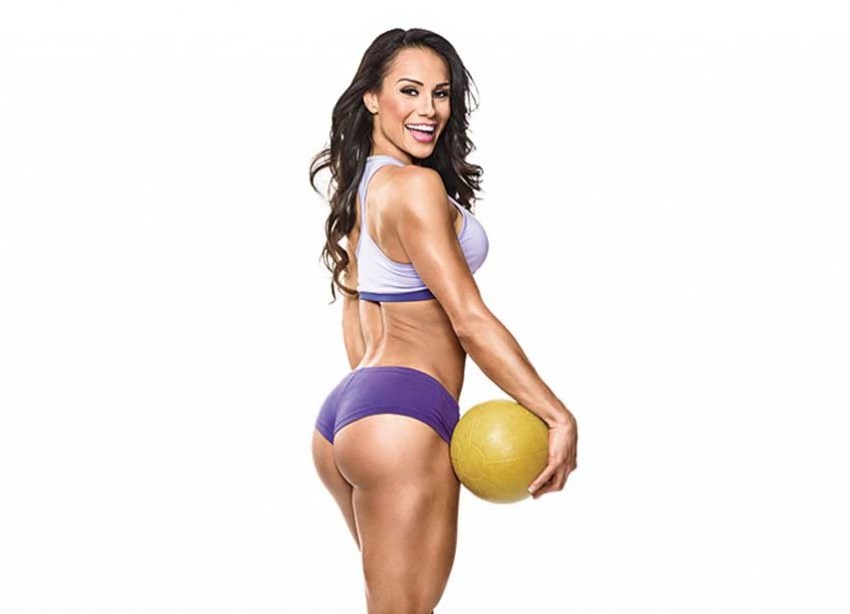 Nathalia’s decision to change her unhealthy lifestyle and enter a bikini competition was influenced by IFBB Pro Christine Wan. Nathalia says, it was Christine who encouraged her to consider fitness competitions.

Nathalia was hesitant at first, saying; “I didn’t think that was a good idea because in Brazil the only image we have of competing in bodybuilding.” However, once she found out about the bikini division which was just what she looked for, she changed her mind.

As for the athletes whom Nathalia looks up to, they include; Jaime Baird, Missy Coles’, Amanda Latona, and Erin Stern.

This is Nathalia talking about Amanda and Erin; “I really like Amanda Latona. She is a lot like me in personality and she is cool. She’s outgoing and true to herself. Erin Stern is also very cool and has a great body.” – Nathalia Melo 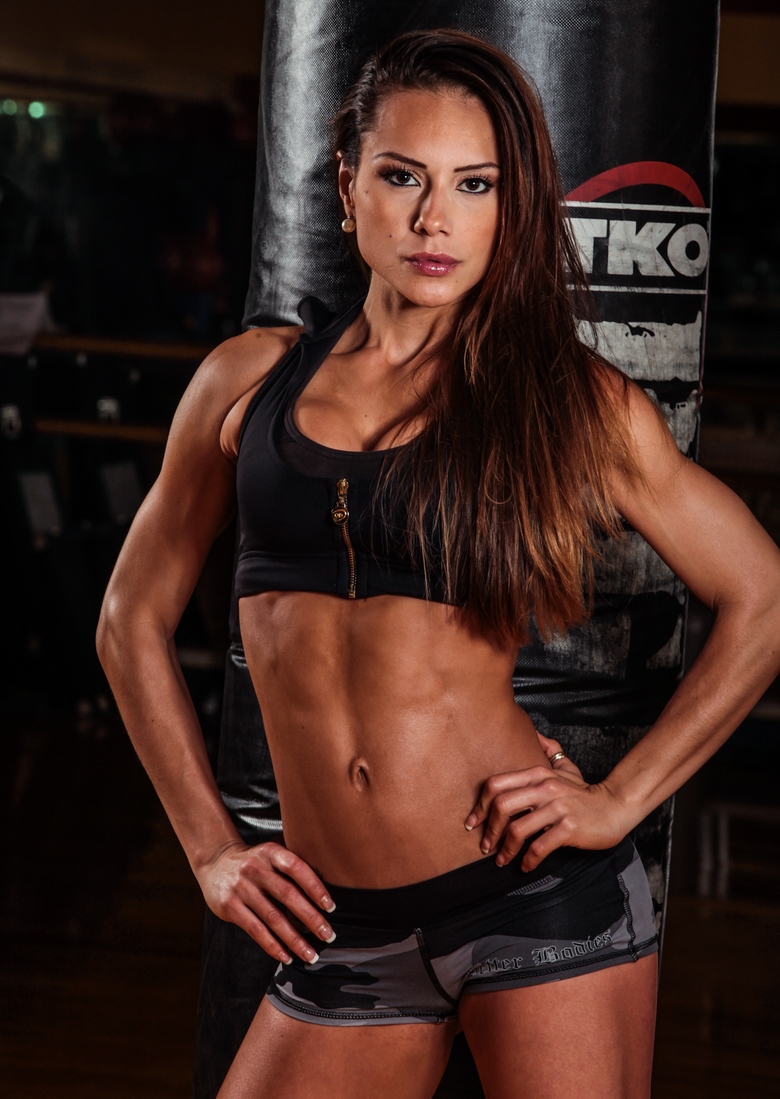 What we can learn from Nathalia Melo

Nathalia Melo’s story of overcoming her unhealthy habits during her first few years in America is a prime example of how fitness can make all the difference in improving life quality.

Whether you’re struggling with weight, or maybe just want to feel better in your own skin. Regular exercise and a healthy diet is always the way to go.

If you haven’t already, consider taking on a fitness lifestyle. It’s an ever-growing movement in the world, with more and more people realizing the importance of physical activity and a nutritious diet – just like Nathalia Melo. 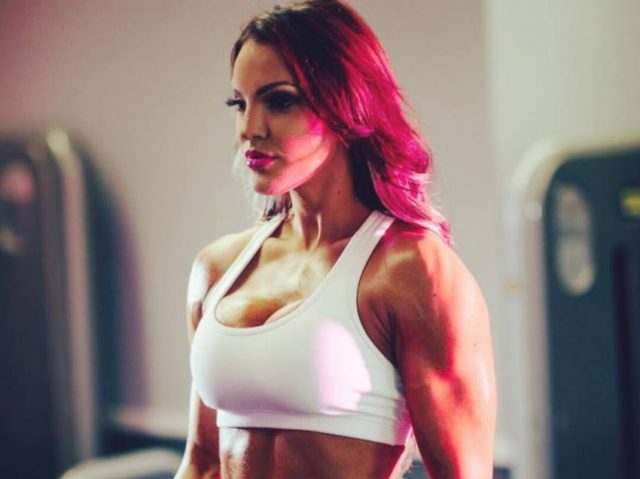 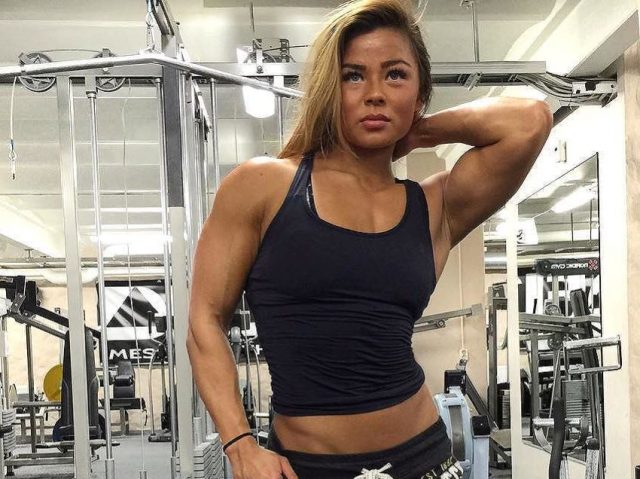 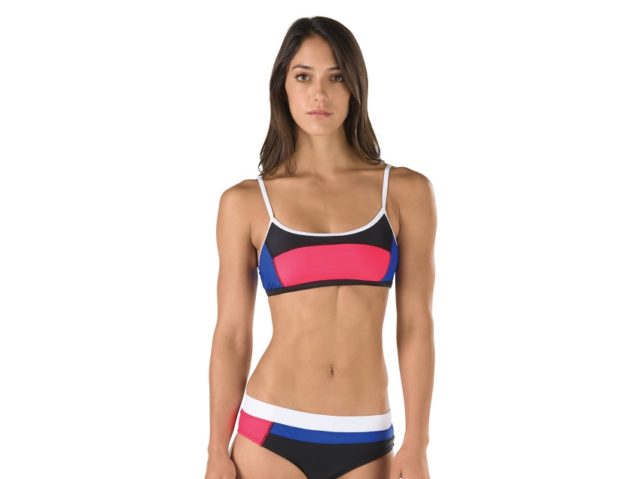 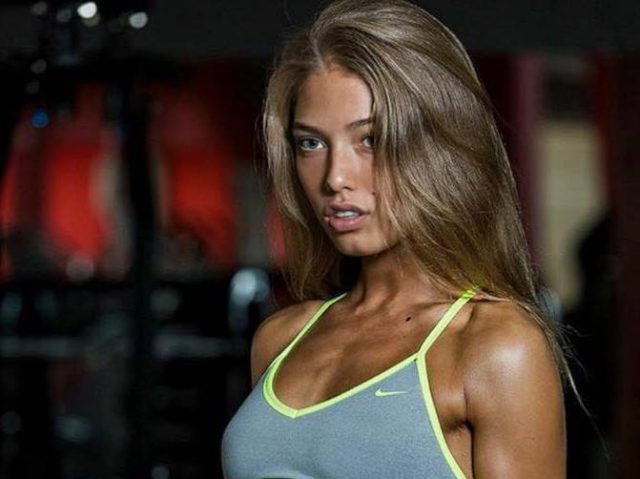 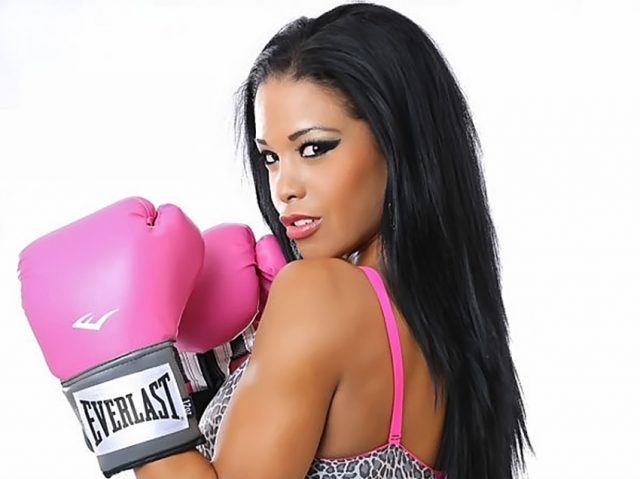 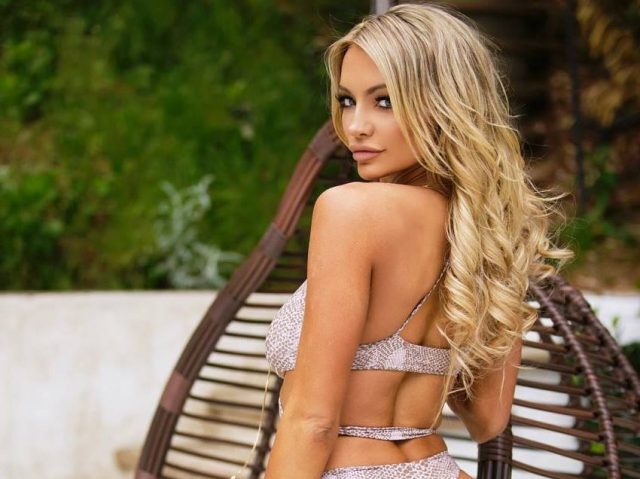