Margie V Martin is an IFBB professional bodybuilder, sponsored athlete and model from Georgia, U.S.A. She’s gained the accolade of ‘Ms Rising Phoenix,‘ due to her victories at the 2015 and 2016 ‘Strength Rising Phoenix’ World Championships.

Growing up, Margie was obsessed with improving her physique, and becoming a powerful competitor to rival other women on her favorite TV shows. After developing her body at school, and in the marine corps, she embarked on a professional bodybuilding career. She placed 1st at 5 competitions, and become a well-known international figure in the process.

Margie also studied for a masters in sports medicine. Throughout this period, she continued to train herself to her limits, and has maintained an excellent physique to rival the best female bodybuilders on earth. This is Margie’s story: 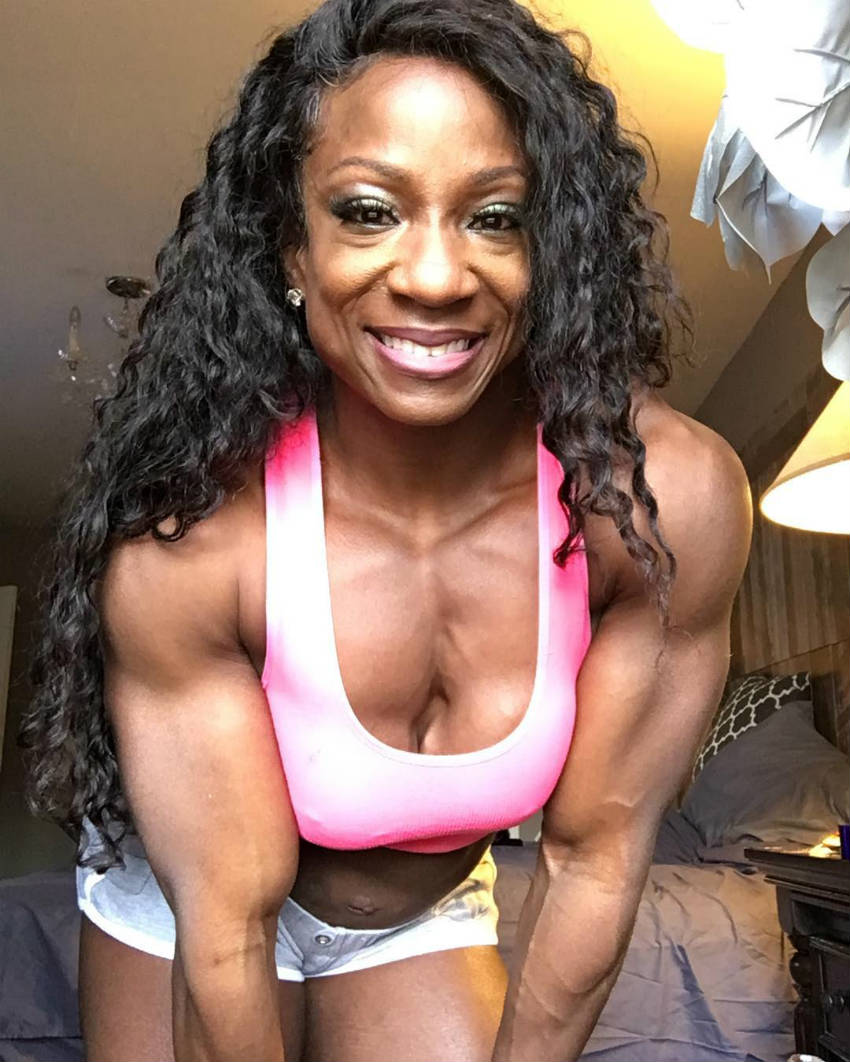 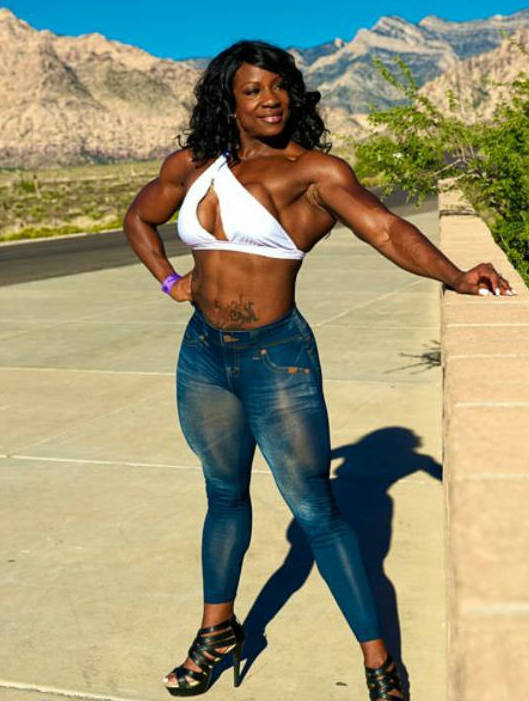 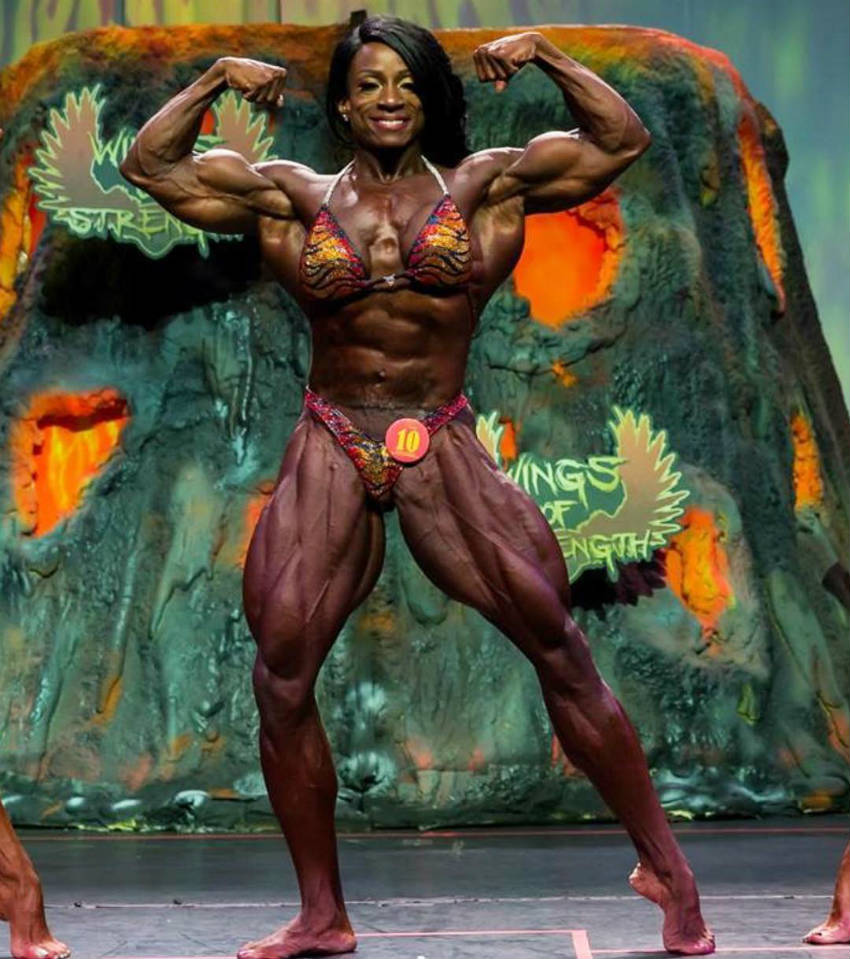 Margie V Martin was born and raised in Georgia, U.S.A. Living in the city of Atlanta , she always dreamed of having a powerful figure. She’d watch the women of ‘American Gladiators’ and other programs – wishing she could be just like them.

Her interest in taking part in bodybuilding, was sparked when she met Lee Haney as a young teen at church. She asked the IFBB Pro and 8 times Mr Olympia what it took to build such a body, and he talked with her for a few minutes about his diet.

After this conversation, she became extremely interested in pursuing bodybuilding and creating a well-built physique. Luckily for her, a bodybuilding club had opened at her high school – she signed up immediately.

When Margie arrived at the class, she noticed that she was the only female present. She actually enjoyed this, and found it humorous that she was stronger than a number of the boys.

She continued to pursue bodybuilding throughout high school, developing her physique and learning about proper diet and nutrition. Her love for the active lifestyle, made her consider a career in the military.

Her father had served in the Marine Corps, and this career seemed like a natural choice for Margie. She attended an interview, and was accepted into the corps – instantly seeing this as a great opportunity for her to develop her fitness levels. 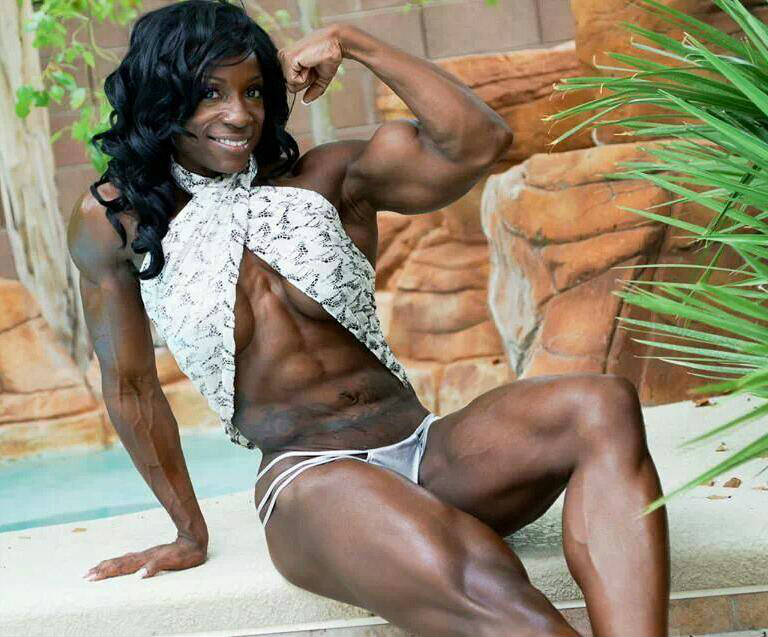 As her marine corps career developed, she managed to reach the rank of sergeant. At this point, she built an excellent physique, and decided that she had the potential to win competitions. She had also moved to Okinawa in Japan at this stage. Where the armed forces held regular bodybuilding shows at the base.

While her colleagues started telling her to take part in local bodybuilding shows, she says that she had no idea how to diet before a contest. As a result, her pre-contest diet in 2007, consisted of canned tuna and string beans every day for 6 weeks.

She placed 5th in this competition, but 5th place in the Far East Armed Forces Bodybuilding Competition was not bad at all. Margie was relatively pleased with her performance, but said “the day of the show I was so excited, but as smooth as a baby’s bottom.”

This wasn’t an ideal start for Margie, but it didn’t get much better for the next few years. At this point, Margie decided that in order to create any success at all, she would have to work harder to develop her nutritional plan and training routine. She did just that, and began to notice positive changes to her physique straight away.

In 2012, Margie competed in, and won the NPC Pacific USA XVIII Championships. This was a major turning point in her career, where she was named as NPC’s  ‘Athlete of the Month.’ From then on, Margie knew that in order to win at the professional level, her diet and routine had to be perfect – with no room for error.

Getting Her Pro Card

At the 2013 NPC USA Championships, Margie placed 1st in the heavyweight category and overall. This victory allowed her to receive her Pro Card, which was an emotional event, as all her hard work had paid off.

The following year in 2014, Margie made her IFBB Professional debut. She competed at the 2014 IFBB Toronto Pro Supershow, where she placed 4th. While she would liked to have placed higher, she knew that with hard work and dedication, she would improve her results.

She did just this, and at the 2014 IFBB Omaha Pro, Margie managed to land a 2nd place trophy. After qualifying for her first Ms Olympia and coming 10th, she managed to win big in Tampa

After this incredible career, Margie decided that she would take her practical knowledge to university. She pursued a masters in Sports Medicine, and managed to juggle this degree with her family commitments.

She enjoyed every minute of this course, and loved to connect her passion with a scientific study of nutrition and medicine. 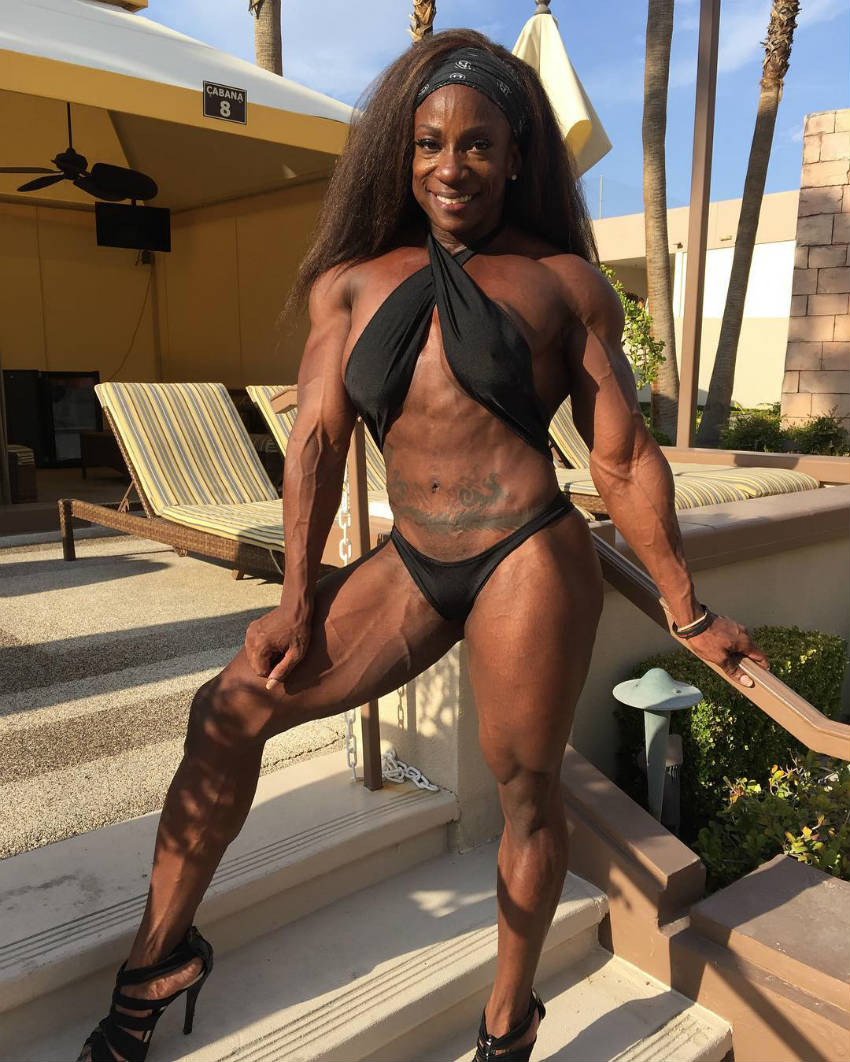 Margie loves to lift as heavy as possible. She’s not worried about having a beach body, so lifts heavy to build a true bodybuilder’s physique.

She also completes as many reps as possible, for as long as she can before failure. Margie calls herself the “Drop-set Queen,” because she works out alone and keeps doing drop sets until she can no longer lift.

Margie doesn’t feel the need to do cardio sessions that often. She needs to retain as much body weight as she can, and she says that her workouts offer a cardio workout in and of themselves. When she does complete cardio sessions, she will use the treadmill or jog outdoors. 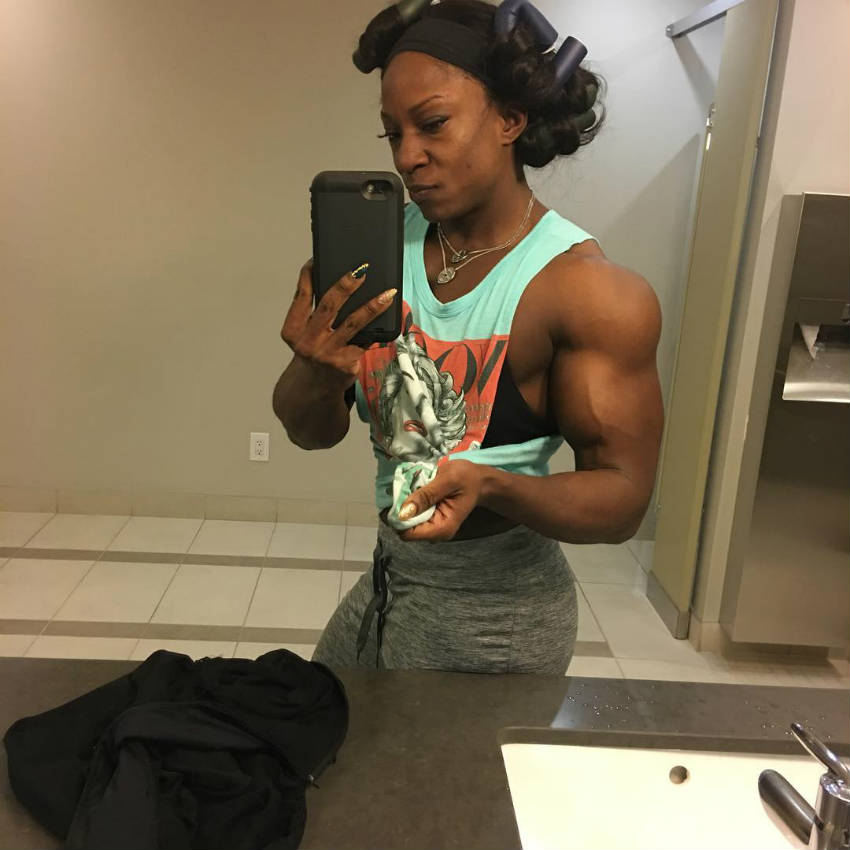 Margie says that her nutritional approach is “fairly simple.” Her diet is focused around hitting her daily macronutrient needs, and she has learned to love carbs and their function in her body.

Initially, Margie mentions that she wouldn’t eat as much as she could have. As her career developed though, she began to realize how beneficial food was on a daily basis. She began to enjoy preparing, as well as eating tasty, nutritious foods.

“Obviously, the diet is what everyone places the most importance on when preparing for a competition; however, diet alone doesn’t win the competition … knowing how long to diet, when to change up your diet, how much and what kind of cardio to do are a few of the variables in creating a well rounded contest prep!!” 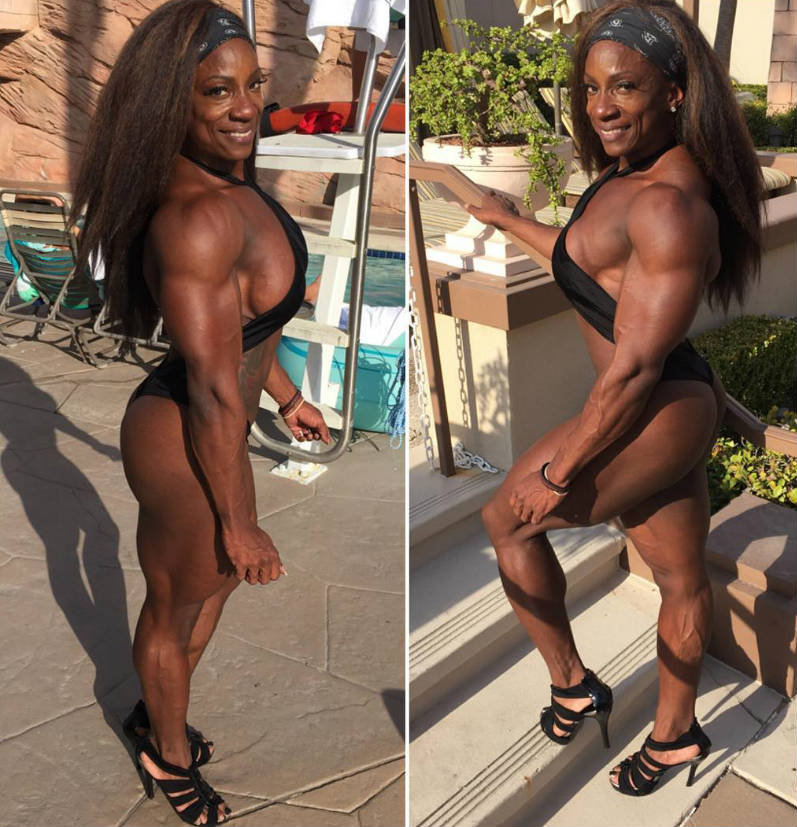 Margie is influenced by a wide range of people and experiences. She said while reflecting on her career, bodybuilding has been “such a journey,” and without her friends it would have been a lot harder.

In terms of peers and athletes, Margie loves the body of Juanita Blaino – seeing her as an excellent competitor with a well proportioned physique. 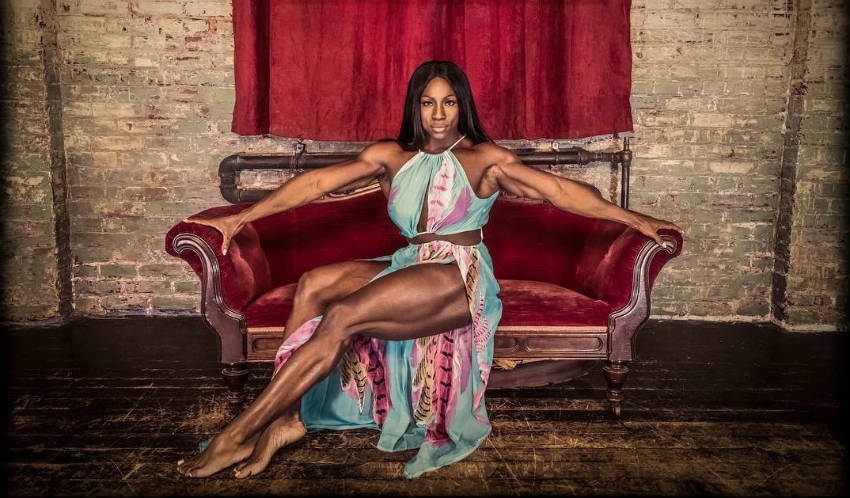 What we can learn from Margie V Martin

Margie’s story has shown us that 1st place trophies are always won with years of preparation. To win her first IFBB competition in 2014, she had to prepare for a decade, and fail, to make the podium many times over.

If you have a fitness goal you want to achieve, it may be useful to see this goal as a long term dream. If you focus on what you can achieve right now, you will be able to build yourself to a level where that goal can be reached one day.

Margie you look great! How much can you squat & leg press?

I grew up watching Cory E. and fell in love with Lenda M.
I’m and old dude and I must say female body building needs a personality like you.
Keep up the good work, your new fan.

love her MASSIVE JACKED QUADS esp., when doing THE QUADS SHAKE getting to vein MORE