From throwing discus, sprinting on the track, and taking part in dancing, Kirsty Botfield grew a desire for a competitive lifestyle from an early age. Since then, she’s become renowned for her physique on the fitness modelling stage in the WBFF.

By the time she reached 16, Kirsty became fascinated with the phenomenal physiques of female wrestlers. It was during this period, Kirsty was inspired to start weight training in the gym. From then on, she made it her mission to achieve a great physique – just like her idols.

Eventually, she started competing in bikini shows, reaching her peak by 2016 when she was awarded her WBFF Pro Card. Ever since then, her career in fitness excelled – becoming a personal trainer and sponsored athlete in the process. 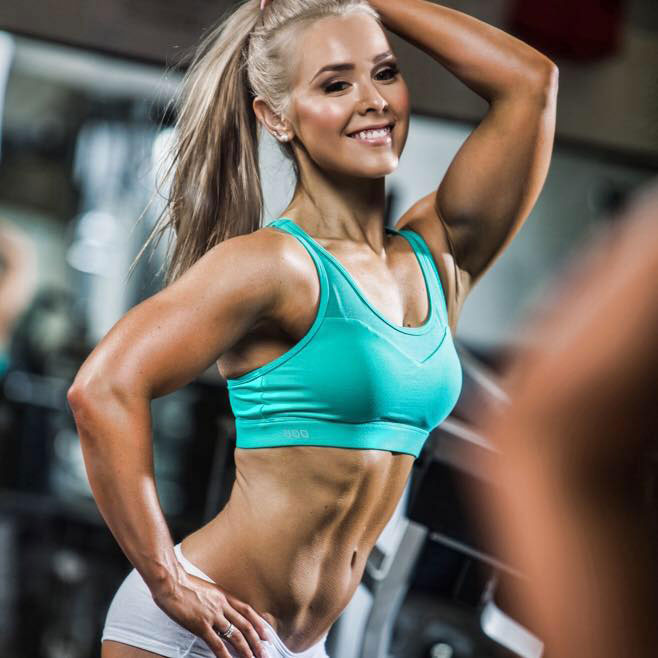 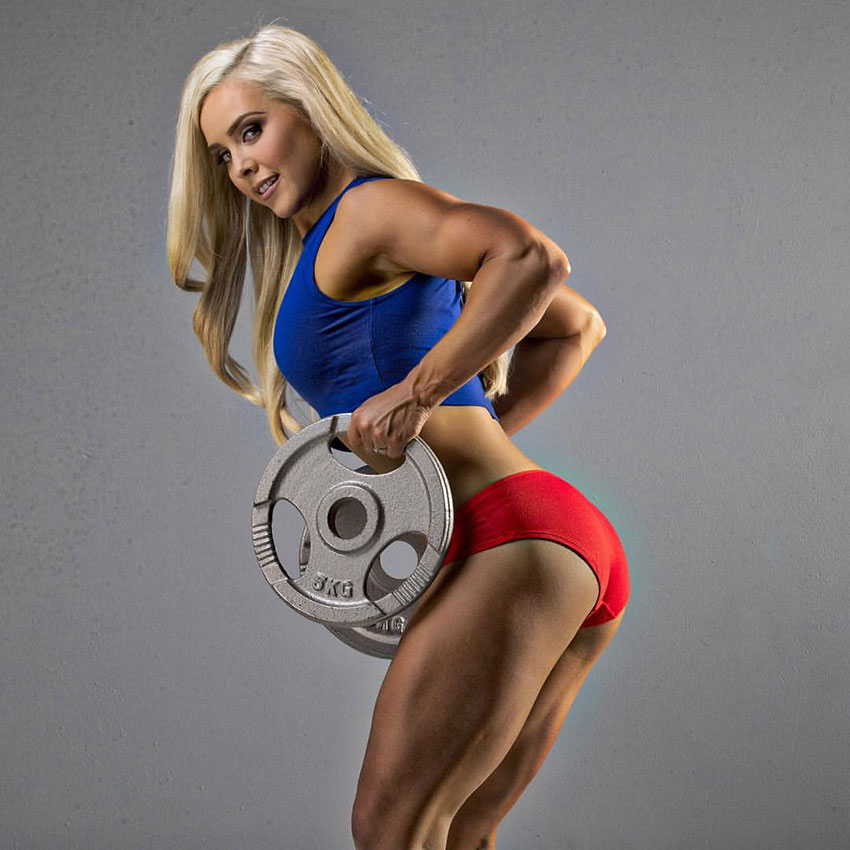 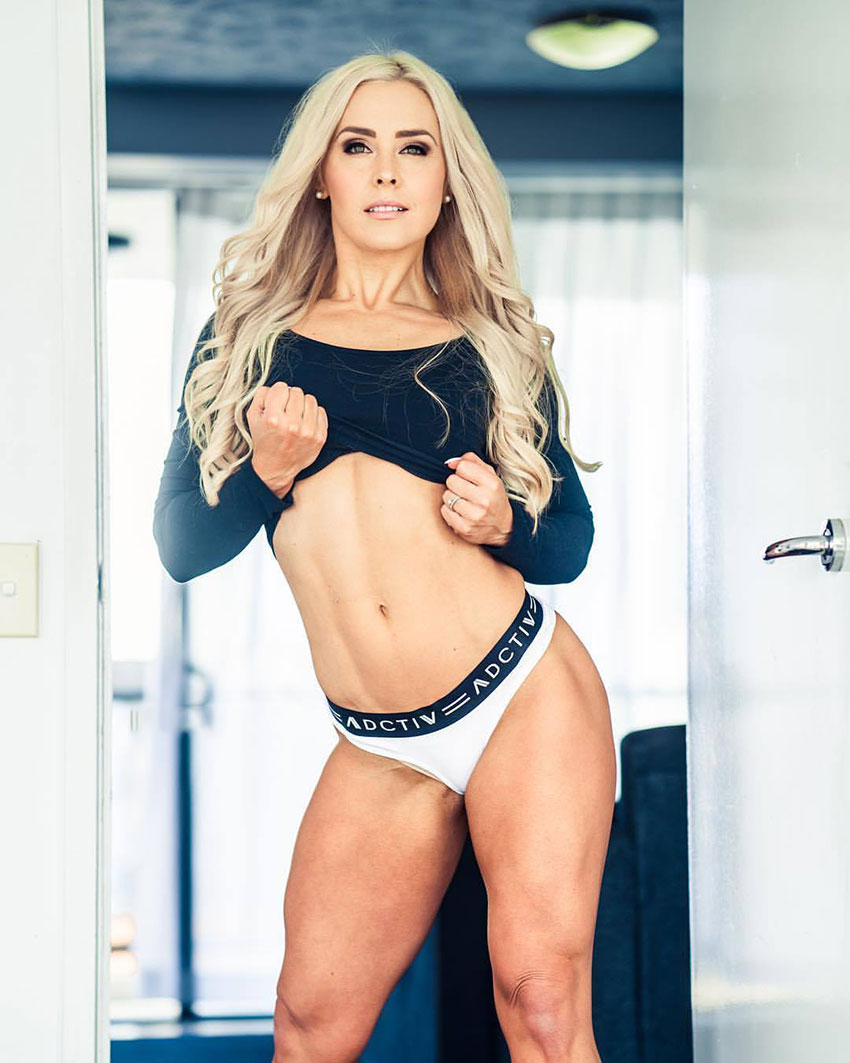 Kirsty was born in Sydney, Australia in 1984. She began dancing at the age of 5, and from this moment onward her life has revolved around sports.

During her high school years, Kirsty started taking part in competitive sports. This included the likes of sprinting and discus throwing – teaching her to remain disciplined, focused, and consistent with her training.

By the age of 16, Kirsty became inspired by the physiques of professional female wrestlers. Because of this, Kirsty wanted to build muscle mass to earn a great physique just like her wrestling idols – this is when she started to take part in professional wrestling alongside dancing.

It was at this point, Kirsty became serious with weight training. From then on, she trained in the gym consistently, quickly reaping the rewards of her intense workouts. Eventually, her dancing career took off when she set up her own business at the age of 18 – allowing her to make a living from something that she loved.

After working hard to build her career as a dance teacher, Kirsty took some time out to travel across Europe. Consequently, her levels of fitness were negatively impacted due to paying little attention to fitness, if any at all.

Soon enough, this caused Kirsty to become unhappy with the way she looked. Her hard work training in the gym had gone to waste. It was at this point, Kirsty realized that travelling had caused her to lose touch with fitness. From then on, Kirsty knew that she had to change her ways.

Appearing in a bodybuilding competition was something that Kirsty had wanted to do for a while, but she never had the time. Ever since this moment, Kirsty made it her mission to become a success on the bodybuilding stage.

It was at this point, Kirsty began training with a personal trainer in order to get back into shape. From then on, she set her sights on becoming a success as a bikini competitor – giving her a reason to keep pushing forward in her life. 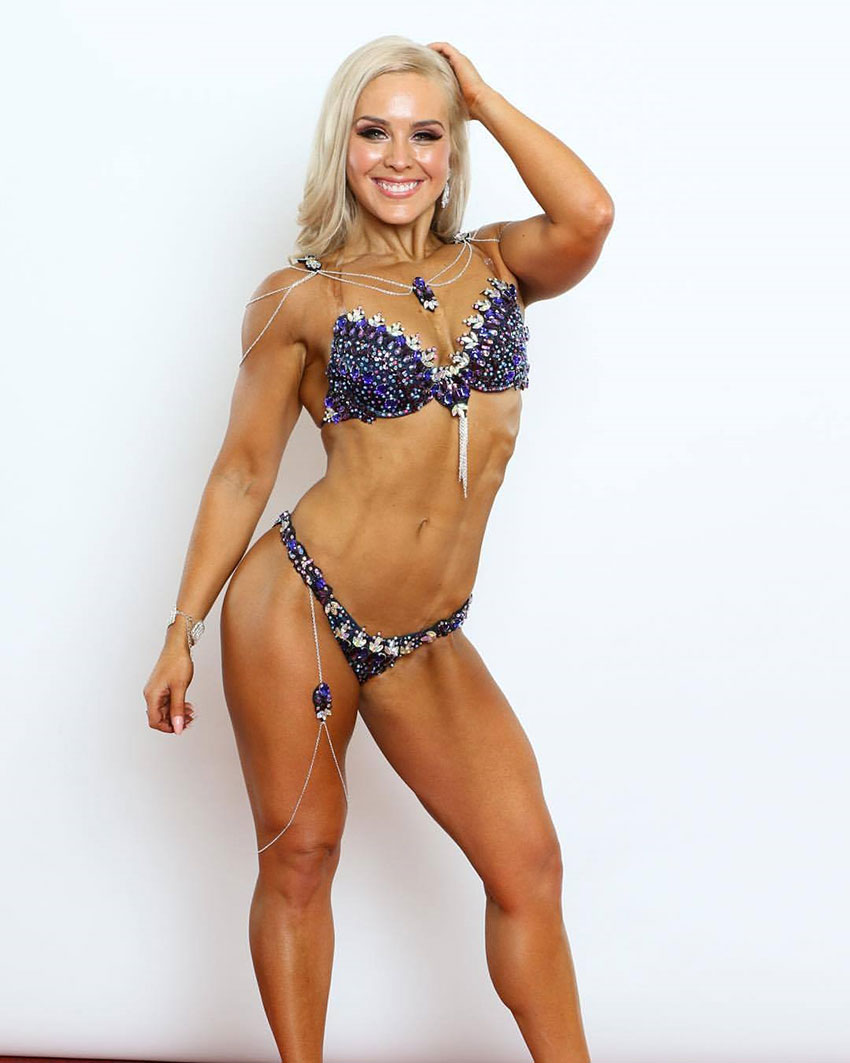 Life as a Fitness Model

Kirsty began her career as a bikini competitor in 2013. Her first competition was the IFBB NSW Championships 2013, where she finished in 6th place in the bikini novice category. Kirsty was then aware of her potential on the bodybuilding stage. She then used this as motivation for her next competition.

Kirsty continued to train hard with the aim of replicating the success of her last competition. She appeared in the INBA NSW Titles competition in 2013, storming to a 3rd place finish in the bikini novice category. This highlighted that her hard work training in the gym translated into success on the bodybuilding stage.

Kirsty went on to appear in the WBFF Australia Diva Bikini Model competition in May 2015. She finished in second place in the competition – proving her desire, commitment and dedication to consistently improve herself.

Kirsty returned to the same competition the following year in 2016, finishing in 1st place. As a result of her success, she was awarded her WBFF Pro Card. From then on, she was offered the chance to move to the next level in her fitness career.

After reaching her own fitness goals, Kirsty was determined to help others achieve the same level of success. To achieve just that, she became a personal trainer alongside her career as a dance teacher.

As a result of the success she earned on the bodybuilding stage, Kirsty eventually became a sponsored athlete. This was proof that Kirsty’s determination allowed her to reach new heights in her fitness career. 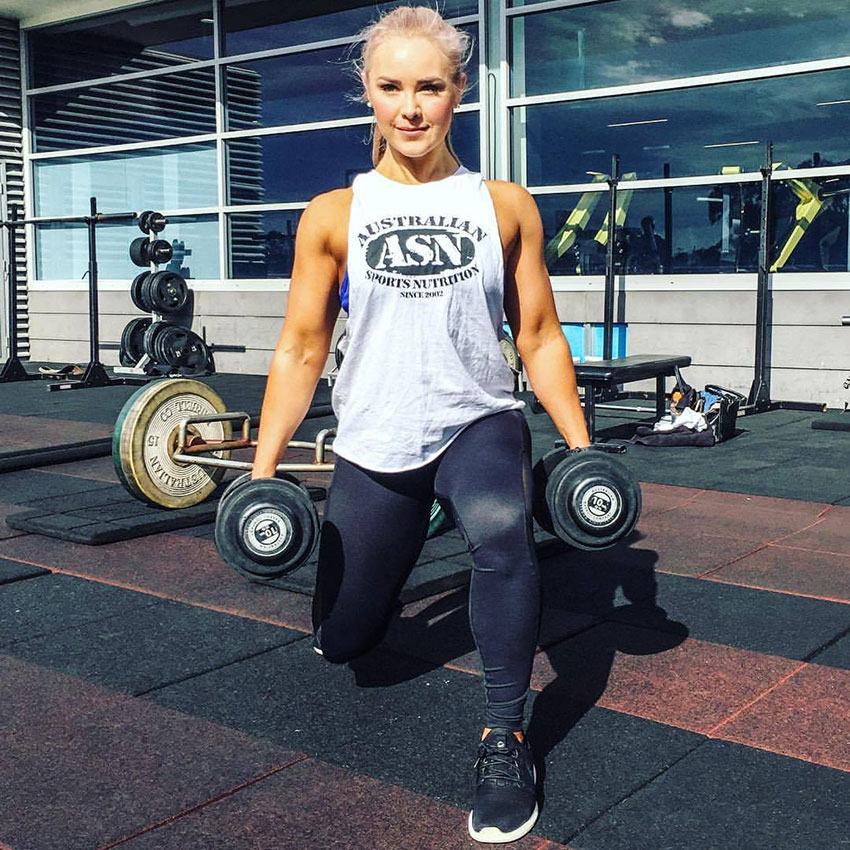 Kirsty lifts weights in the gym 3-4 times a week, in addition to performing HIIT cardio 5 times per week. In addition, she often trains twice per day in order to obtain maximum results from her workouts.

Kirsty’s performs the following exercises regularly, citing them as her favorite exercises: 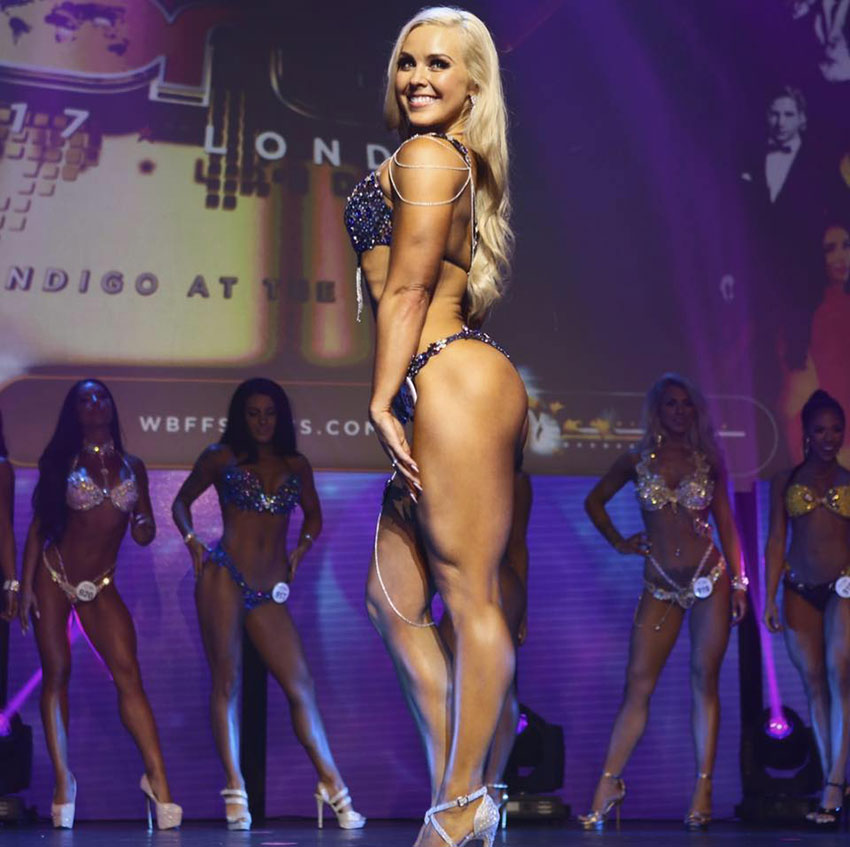 Kirsty has followed a plant based diet for several years, proving that eating meat and dairy isn’t required to obtain a phenomenal physique. She uses ‘carb cycling’, alternating between low, medium and high carb days along with 2 cheat meals per week.

The common foods that she incorporates into her diet are listed below: 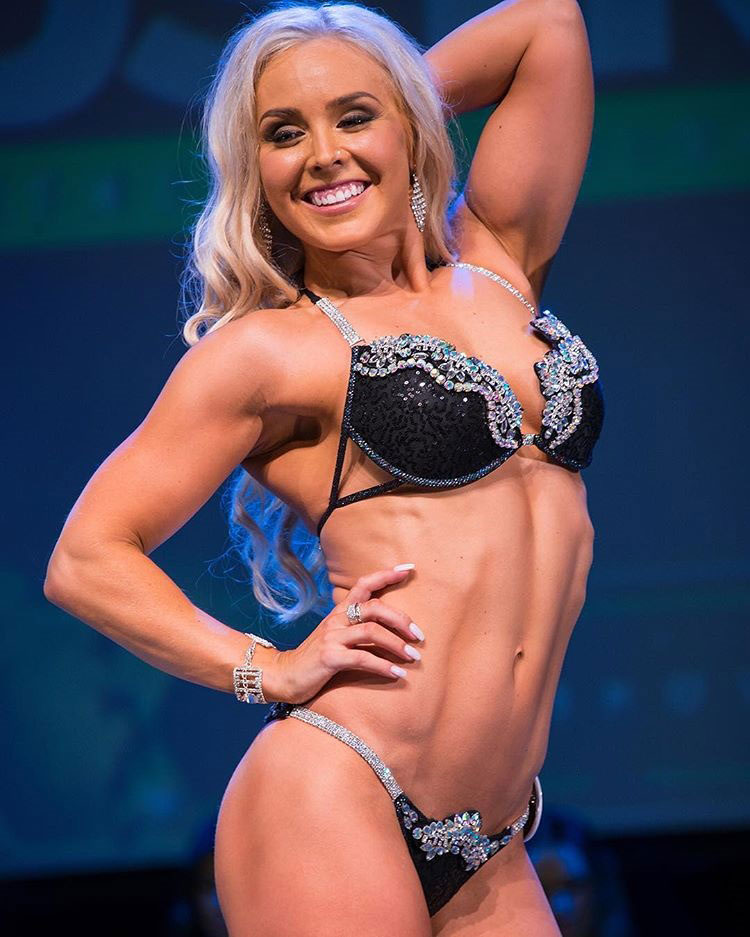 Hattie Boydle, Jen Jewell, Andreia Brazier, Justine Munro and Jamie Eason are all major influences of Kirsty. The success they earned as bikini competitors was something that inspired Kirsty to keep pushing forward, following their example.

However, Kirsty learned to become self-motivated throughout her fitness career. As a result, she was able to reach all of her fitness goals. In regard to this, Kirsty stated the following:

“My motivation comes from myself. I have so much that I want to achieve and I am the only one who can make it happen, so I push myself, everyday, visualizing myself achieving my goals, and my determination to accomplish them all is so fierce that I can’t help but feel motivated”. 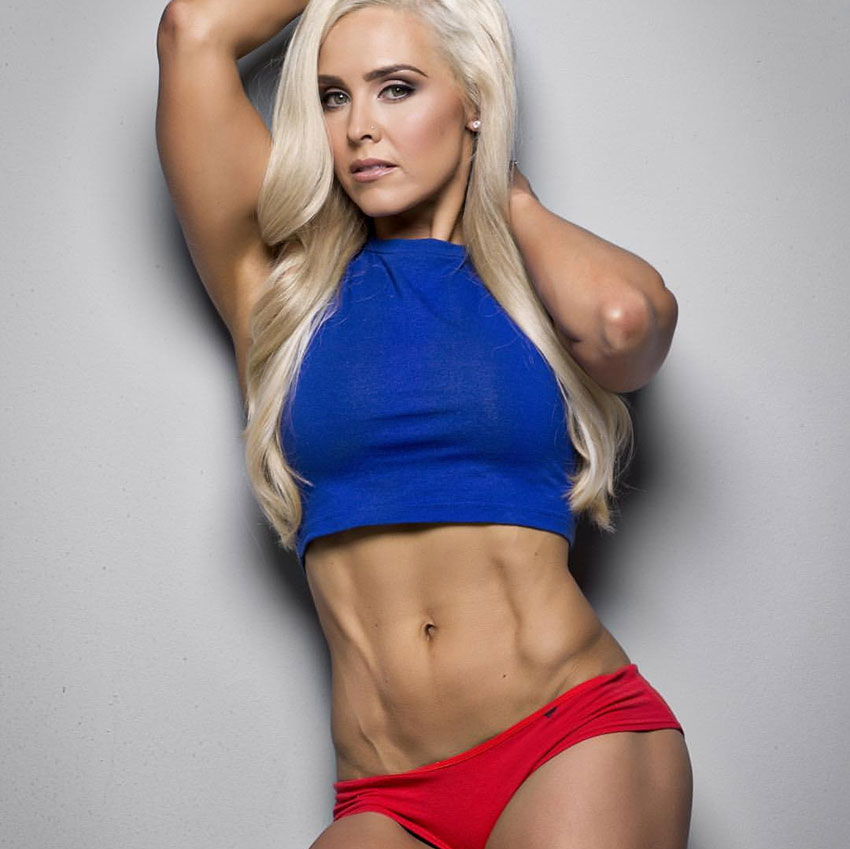 What we can learn from Kirsty Botfield

Kirsty Botfield found a love for fitness from an early age. Ever since then, she has dedicated her life to maintaining an active lifestyle, while helping others achieve their fitness goals.

Later in her life, Kirsty began to follow a plant based diet. From then on, she proved that eating meat and dairy isn’t necessary in order to build a great physique.

What we can learn from Kirsty Botfield is; don’t be afraid to chase your dreams and follow in the footsteps of your idols. By staying determined, dedicated, and consistent, you can achieve great things in your fitness journey – just like Kirsty.

KIRSTY IS LUSCIOUS! SHE HAS A FABULOUS BEAUTIFUL SEXY BODY!