Karina Elle Lisenbee is a fitness model, trainer, and a former cheerleader from Florida, US. She was named the most “in-demand” fitness model in 2014 by a popular magazine.

Being a competitive cheerleader and Cross Country runner for a majority of her life, Karina’s transition into fitness happened naturally. During college, she worked as a group fitness instructor. From there, her love for physical exercise only became stronger as the time went by.

Soon after she finished college, Karina devoted all of her free time to fitness. Where she begun competing in bikini shows. Over time, Karina became one of the most recognized female athletes in the sport of Bikini Modelling.

She eventually went onto win the World Fitness Federation Pro Bikini Championship, among many others. 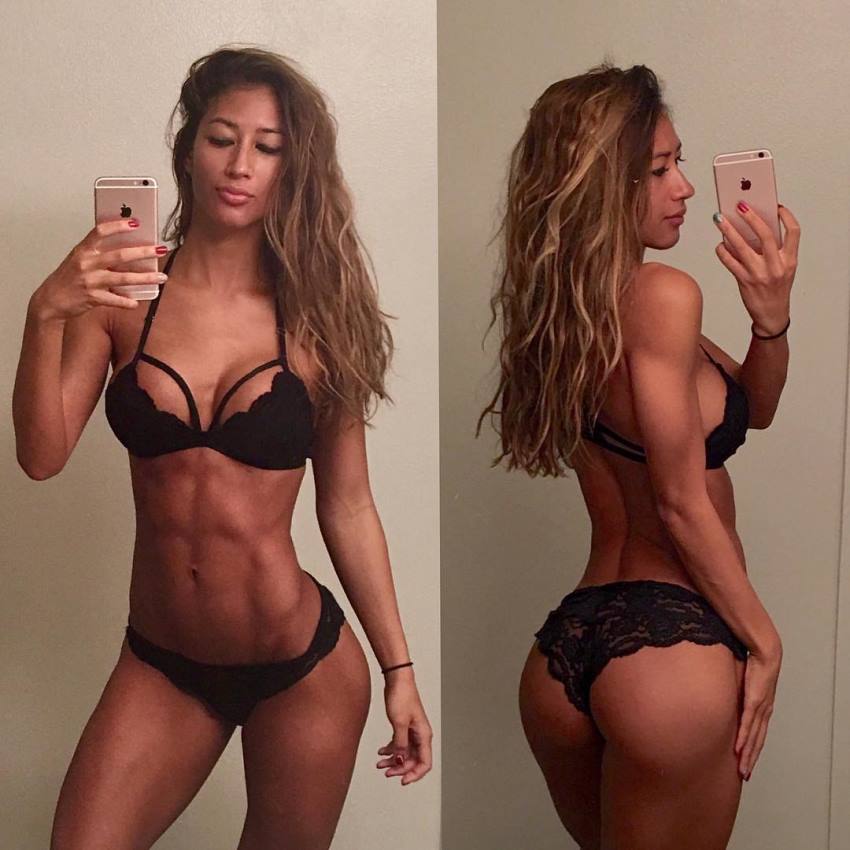 “You carry yourself a little differently when you train, you earned your body, you respect your body. And that let’s everyone else know to treat you that way too.” 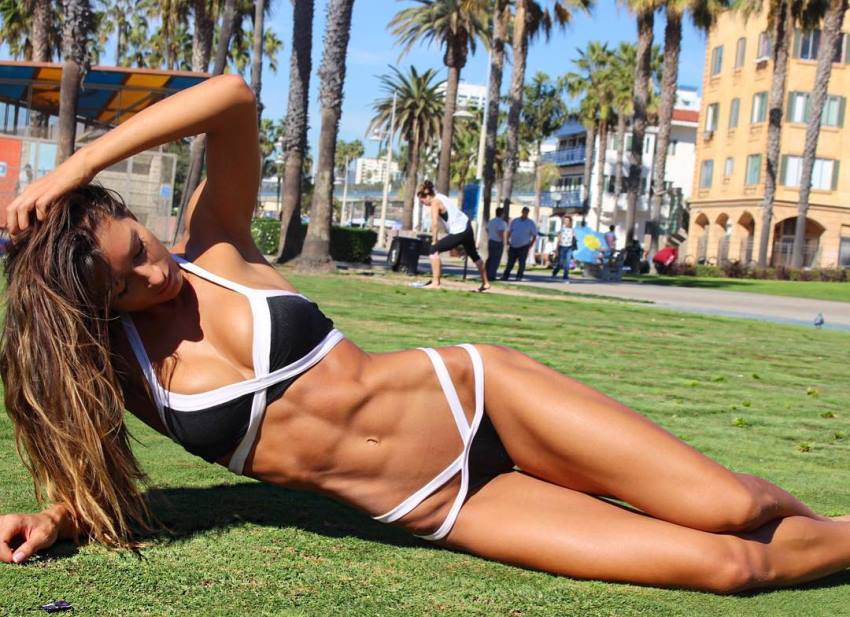 “Do it from the inside out.”

Karina Elle Lisenbee is the owner of a personal training business. She’s a winner of the World Fitness Federation Pro Bikini Championship. 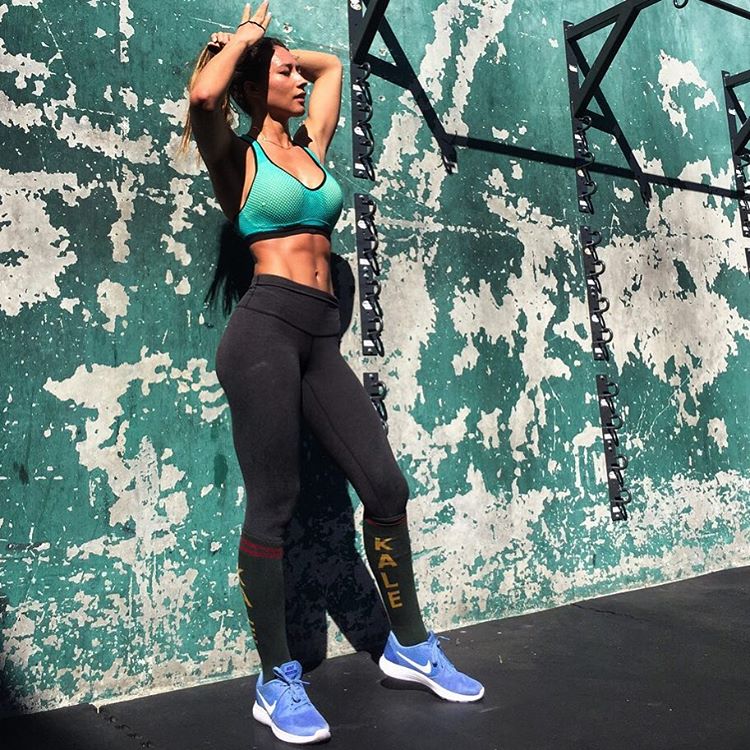 “I believe in emotional training, then performance, then aesthetics. In that order.”

Inspired by Her Brother

Half Vietnamese – half French, Karina Elle Lisenbee was born in 1991. She grew up in Florida, US. Together with her sister and older brother who were all fitness enthusiasts.

Karina became involved in athletics after being inspired by her brother. This involvement began at the age of 14 when she entered high school and joined the cross country team. Over the 4 years she spent in high school, Karina competed in various disciplines, such as cheerleading. These activities allowed her to build a foundation for the fitness lifestyle she would later become involved in.

After finishing high school, Karina attended the University of Florida. Cheerleading and cross country were soon replaced by a job as a part-time group fitness instructor.

Karina liked the job so much that she realized fitness was something she wanted to pursue as a full-time career.

It was at this point when Karina started going to the gym regularly, sacrificing her free time in order to look, and feel better. After months of hard work, she became interested in improving her physique to take part in Bikini Competitions – Karina soon begun competing.

Having won the Miss Lake Mary scholarship competition back in her senior year of high school, Karina quickly became familiar with the competition lifestyle. 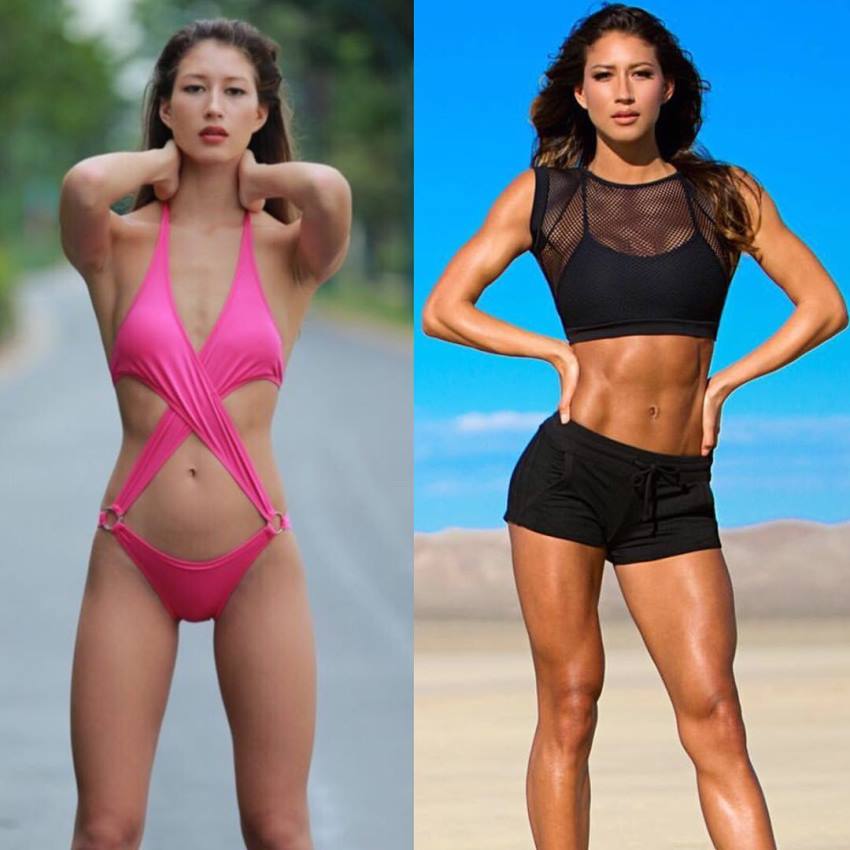 Karina’s Success in the Industry

The year 2014 saw the beginning of her first major competition, the World Fitness Federation Pro Bikini Championship. Not only did Karina manage to win 1st place in her bikini category, but she also won the overall title.

After winning the title, everything went “uphill” for Karina. She soon created her Social Media account where she started posting pictures of her trophy-winning physique, attracting like-minded fans from all over the world.

Karina didn’t waste time and quickly began modeling for some of the top agencies in the country. She’s been featured on the cover of the most renowned Singapore magazine in 2013, and appeared in several minor TV commercials. Karina achieved all of this by the age of 26.

When asked how she stays motivated, Karina replied that she’s “addicted to the endorphins” that she gets after a good training session. According to her, working out isn’t something she has to do – it’s something she loves to do. 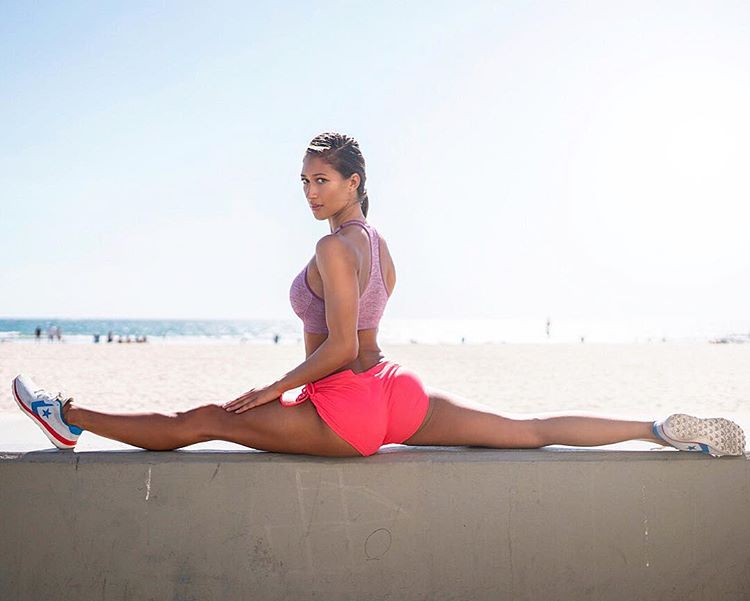 “You get what you manifest.”

Karina prefers using heavy weights when training. That way she fully engages all of her muscle fibers and maximizes as much growth as possible.

She believes that because of the lower levels of testosterone, women find it more difficult to build as much muscle as men. By lifting heavy, her muscles can become strong and nicely toned, according to Karina.

These are some of the favorite exercises for Karina: 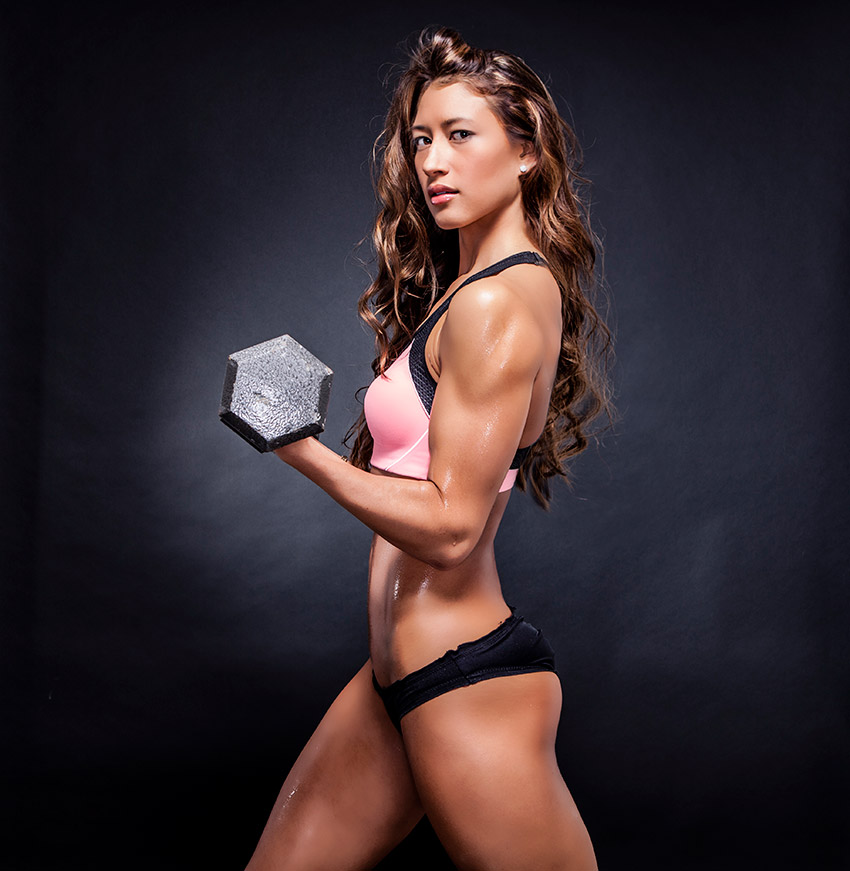 “Beauty may be skin deep but fit is to the bone.”

While she enjoys eating healthily most of the time, Karina admitted she has a “sweet tooth”, and likes to indulge in a “juicy hamburger” and “french fries” from time to time.

Some of the typical foods on her grocery shopping list are:

Inspired to reach your maximum potential like Karina? Read our comprehensive guide on how fat burner supplements can really up your game! 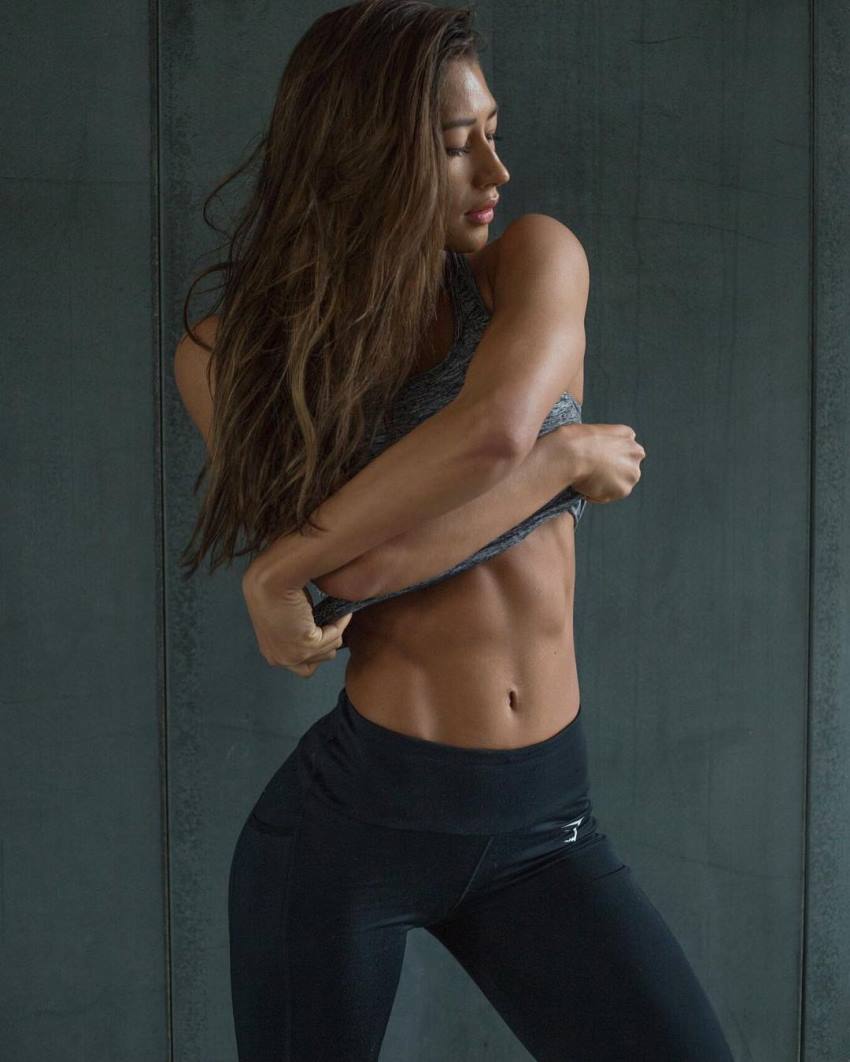 Karina doesn’t idolize anyone in particular, but instead chooses to look within herself for inspiration. However, she mentioned her brother as a source of inspiration back when she was starting out. 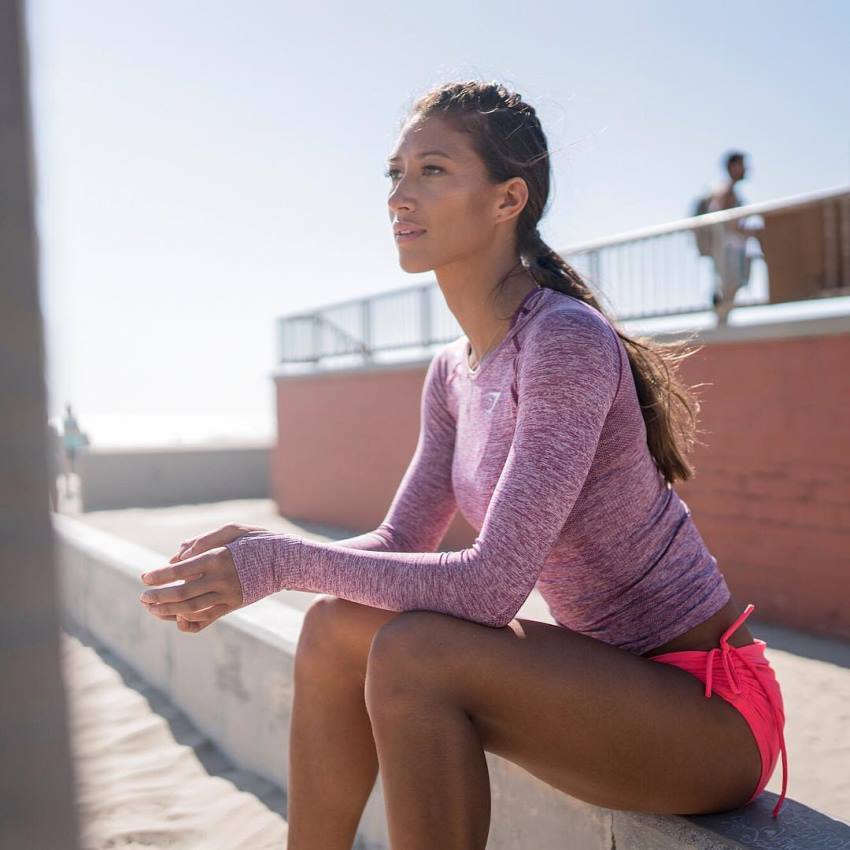 What we can learn from Karina Elle Lisenbee

Karina Elle Lisenbee began cheerleading and running competitively at the age of 14. And by the time she finished high school, Karina already knew what she wanted to become in life – a fitness model.

This drive highlighted her ambitions nature early on, which became more apparent after finishing college. Upon completing her education, she was quickly spotted by the leaders of the fitness industry. All of which were a result of her driven attitude, something we can all learn form.

Even though she became successful, Karina still kept her humble attitude towards life, being grateful for all of the small things she achieved along the way.

Karina is a very beautiful woman.

Karina u r a beautiful and your body is good

You are an inspiration to men and women.

Your dedication, determination and hard work is making an impact in your community and the world through promoting a healthy lifestyle.

Beauty truly starts from the inside-out and you’re pure at heart.

Thanks for breathing life into us all!

Why aren’t you married
to Tim Tebow , so y’all can
make the ultimate Florida QB
GO GATORS THE!!!