Heidi Somers (AKA) ‘Buff Bunny‘ is a fitness competitor, and world-renowned model from Alaska. However, she later decide to move to Texas for personal reasons.

Heidi’s been through some difficult moments in life when she lived in Alaska. She had problems with relationships, lost her job, and crashed her car all in the same month. Not only that, Heidi created some unhealthy eating habits in the process and gained weight.

Deciding to move to Texas to start fresh, and create a new life for herself, Heidi found CrossFit. She used this new activity as a way to get moving, and meet new people.

Heidi enjoyed every moment of CrossFit, but she always had the feeling she could do more. From that point, Heidi went on to compete in the NCP and has since become a world-class athlete and household name. 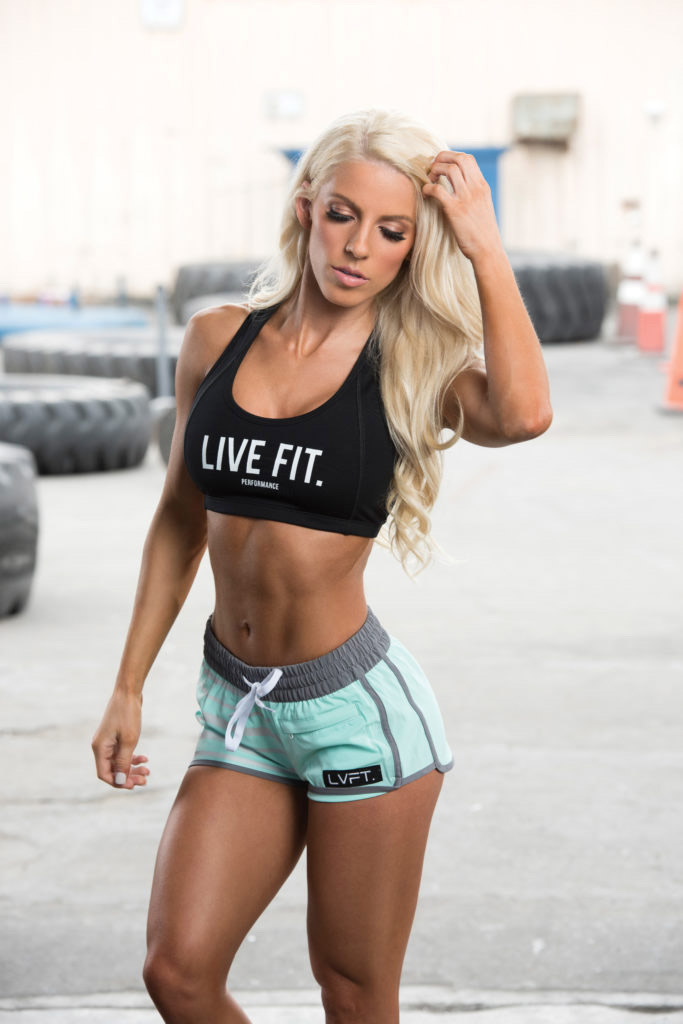 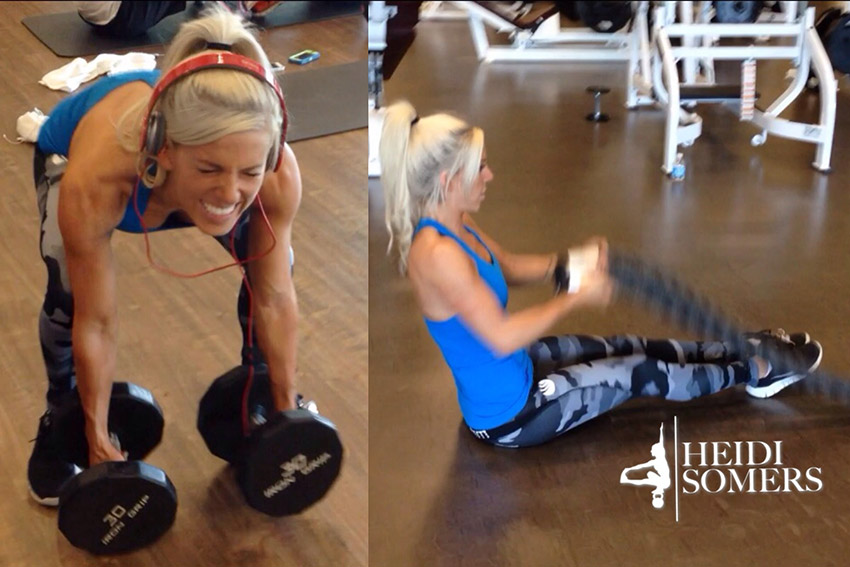 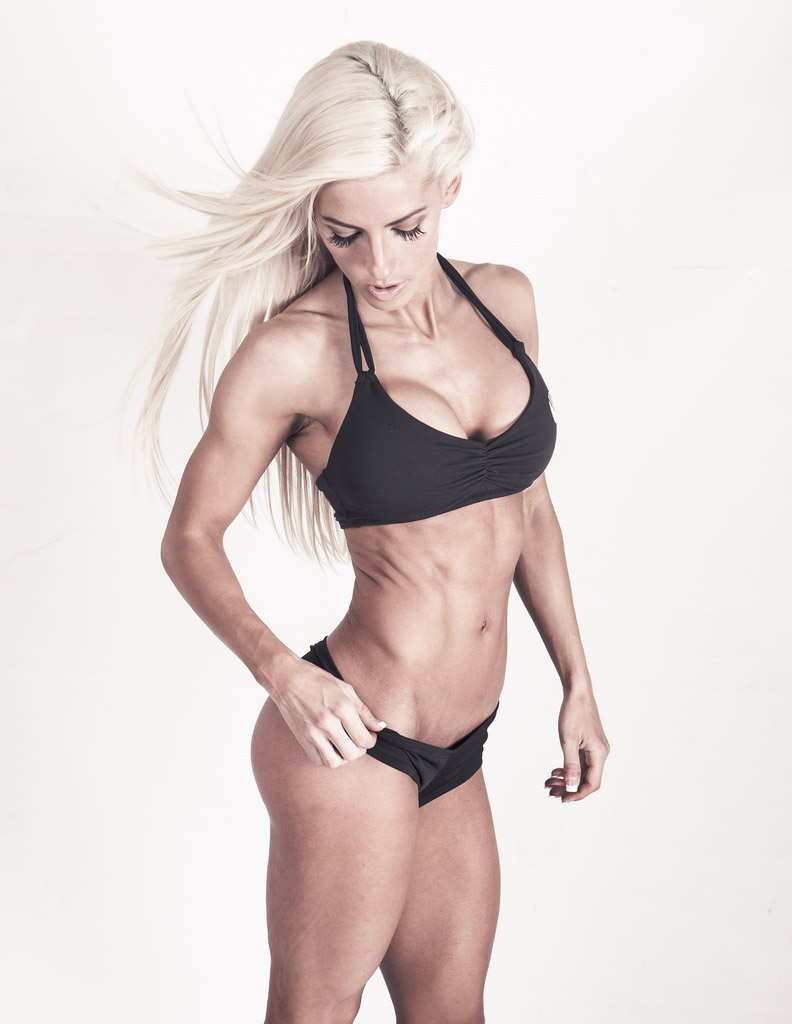 From Alaska To Texas

Heidi Somers was born and raised in a small town in the North Pole, Alaska. When she was 20 years old, she managed to juggle four jobs to save up enough money to move to a new city. She left behind her friends and family and moved to San Antonio, Texas. For the first time in her life, she was completely alone.

Heidi admits she did this for both adventure and better opportunities. Since moving to Texas, Heidi has become a leading female athlete in the fitness industry, however, Heidi’s life wasn’t always active and sociable.

Heidi said it wasn’t only adventure and travel that motivated her to move to Texas. She went through a difficult break-up, crashed her car, and lost her job all in the same month.

On top of that, she had a stalker who would show up where she worked – he’d also bang on her front door. This is when Heidi took the leap of faith and moved to Texas.

However, Heidi hasn’t always been the model of health she’s known as today, she never played sports as a child, and hardly went out during her years of home-schooling.

She once got to a point when she was dangerously skinny, and visa versa, overweight in her teenage years – Heidi lived an unbalanced life in her early years.

One day, this realization of living an unhealthy lifestyle caught up with Heidi.

After visiting a fitting room to try on normal sized clothes – they wouldn’t fit. She looked in the mirror and saw the excess weight she’d gained. It wasn’t only the weight that she saw in the mirror – it was also the realization of the unhealthy habits she’d created.

“It was at this point that I re-evaluated my life and realized I didn’t like the direction I was going with my body. I told my friends I wanted to lose the weight I had gained. They told me it was too late, and that I would never go back to the skinny body I once had.”

After she received this shock to the system, form both herself, and her friends, she became intensely motivated to get fit once and for all.

Needless to say, Heidi went on to become a strong athlete – but it took years of hard work, and a lot of trial and error. “I never went back to being skinny. I became athletic and strong instead,“ said Heidi 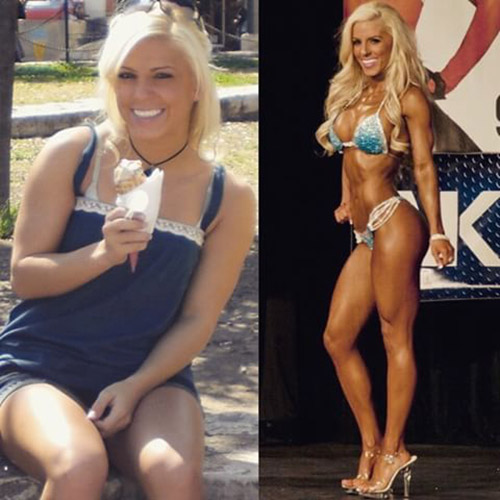 Heidi before and after

Heidi started exercising like most people, wanting to lose weight and tone up. However, she was scared to lift weights at first because she thought they would make her look bulky. But Heidi decided to give weightlifting a try.

She had become a different person, her nails, hair, and skin were all starting to look better. Heidi felt numerous benefits including the need for less sleep. She realized this new way of life was giving her everything she’d always wanted – and missed from her life.

“I started needing less sleep at night and woke up early full of energy! I realized what respecting your body truly meant. I had finally acknowledged you are given one life, one body. You have to make the most of it, and treat your body the best you can.‬”

As Heidi started working-out on her own when she moved to Texas, she also started CrossFit classes to meet new people and learn more about fitness and nutrition. Heidi admitted, even though she loved CrossFit and she learned a lot from it in the beginning, she eventually decided to train on her own with a goal in mind.

After seeing huge amounts of progress, she wanted to take it to the next level, Heidi signed up for her first NCP show and went to work on creating a stage ready physique. Needless to say, Heidi competed in her first show with no help from anyone, apart from a close friend. This turned out to be the beginning of something new for Heidi.

Ever since Heidi made the discovery of lifting weights and working-out, she’s become a world class fitness model. She’s received numerous work opportunities and a large amount of support from fans everywhere.

She loves every minute of what she does, and Heidi said she feels blessed to be part of something so big that can positively affect so many peoples lives.

Heidi’s mission is; she want’s to change the world. She wants to change lives and make a difference. She wants to be part of a movement that shows people how to dig deep and push themselves to live a healthier life.

“I love being able to connect with as many people as possible and being able to learn from each other. It truly touches me hearing that I have helped people change their lives for the better. There is nothing more rewarding than that.‬” 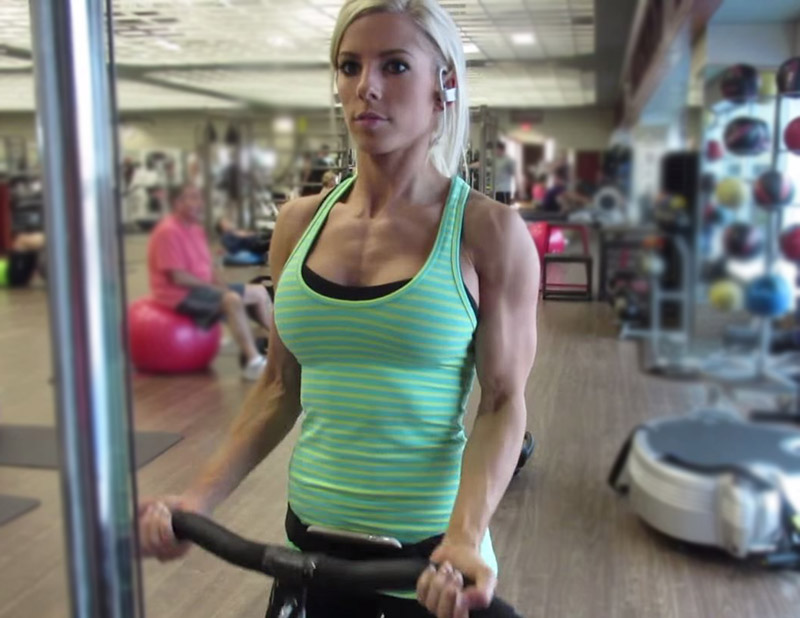 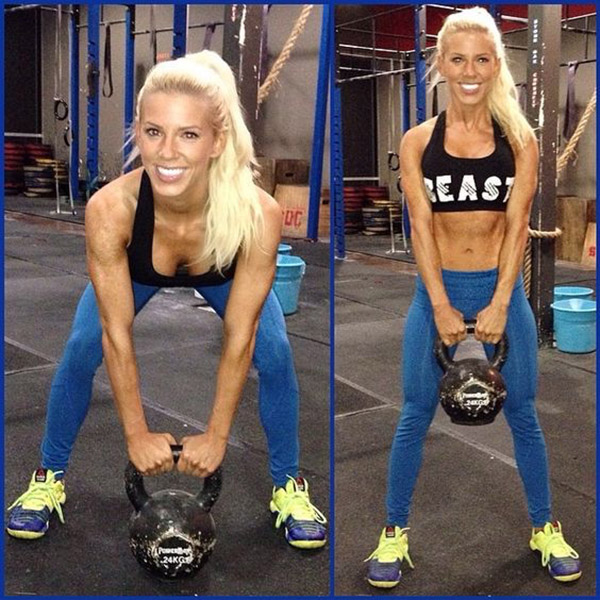 When Heid first moved to Texas she started going to CrossFit to help lose weight, and get fit and strong. Heidi said it was great at the time as she learned new things and made some new friend in the process.

Although Heidi loved CrossFit, she said she’d take a break sometimes as they would constantly train legs. Heidi wanted to work on other areas of her body such as her arms and back, so she would mix her training schedule up between CrossFt and her home-gym.

Needless to say, Heidi found her own rhythm and started working out 100% on her own. She’s since completed in the NCP and been featured in numerous motivational videos and magazines, all thanks to her willingness to move forward and ‘go it alone.’ 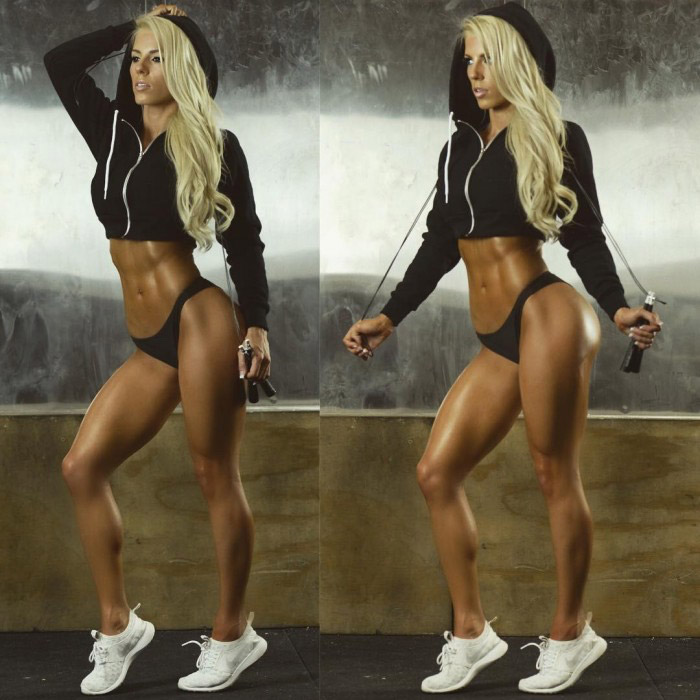 Heidi has gone through some ups and downs with her weight in the past. It wasn’t until she went to CrossFit when Heidi learned about nutrition and the Paleo Diet.

She learned to eat intuitively, and to avoid certain foods such as dairy, and some grains. However, the Paleo Diet does recommend avoiding grains altogether, Heidi still eats grains occasionally.

Heidi started to see some great results from her home workouts mixed with the CrossFit sessions, but she knew she could lose more weight and get leaner. This is when she started the 60-day challenge.

The 60-day challenge consisted of nothing but whole foods such and animal proteins, vegetables, along with nuts and seeds.

She eliminated grains, dairy, and anything processed. In this time Heidi saw the biggest change in her body she’d ever seen. Her abs started to show and the definition started to come out in her arms, shoulder and legs. All of these results were thanks to clean eating.

Inspired to reach your maximum potential like Heidi? Read our comprehensive guide on how fat burner supplements can really up your game! 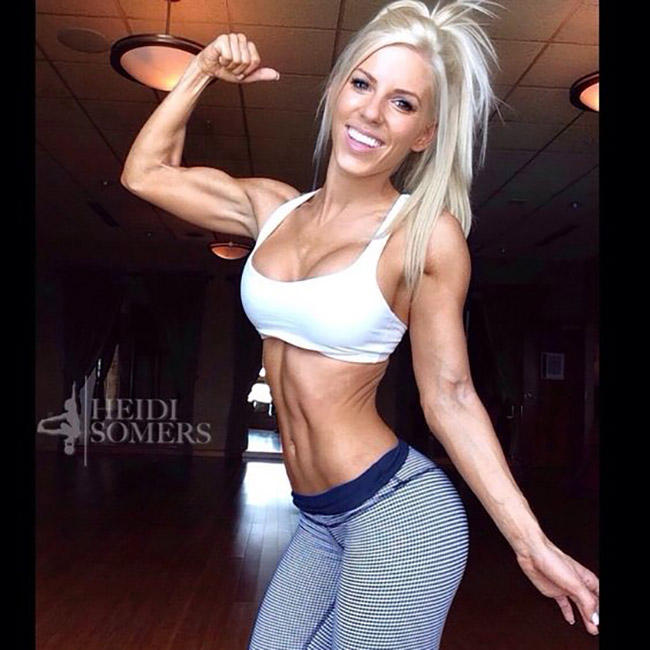 Heidi has gone on to influence thousands of people the world over with her awesome physique and positive approach to health and fitness.

Her social media fan base is continuing to grow each coming year, along with the number of people she’s helping on their journey to strength and stardom. 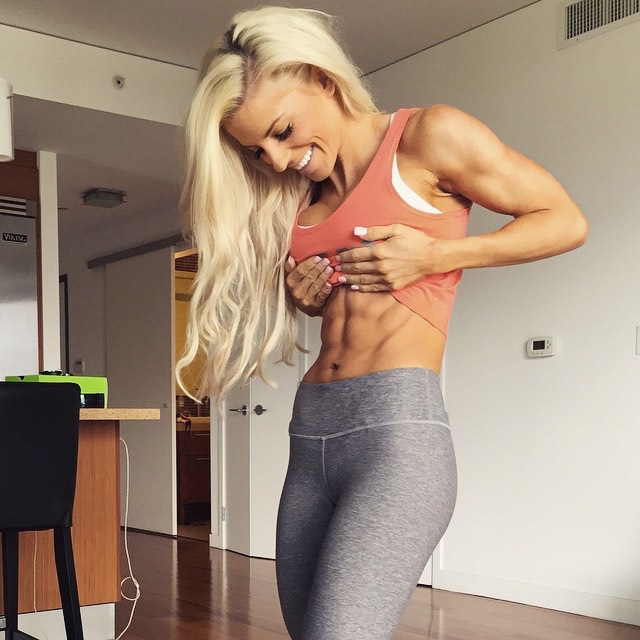 What we can learn from Heidi Somers

Heidi has gone through some difficult moments in life. She went through a rough relationship, lost her job, and crashed her car all at the same time – along with forming some unhealthy eating habits.

Deciding to move to Texas, to change her life 360˚, Heidi went from strength to strength. Learning her own path, and her own rhythm. By doing this, she eventually became a world class athlete, a brand awareness sponsor, and motivation to thousands of people everywhere.

If we can learn anything for Heidi, it’s to listen to your intuition, keep moving forward, and do what make you happy. Following in Heidi’s footsteps, you too can achieve greatness.

Heidi Somers is such a nice person. I’ve seen her videos and she looks really down to earth. Athletes like Heidi really inspire me to keep going to the gym!

God Bless YOU 🙂
I thought you were an actress.
I was googling Holocaust info and saw that you went to the concentration camp in Poland. It was moving to see that you have a good head on your shoulders considering you are one year younger than my daughter. How neat that you have an interest in History which is very important. You recognized that the Jewish people suffered and died during World War II.
Talk when you can,

I’m starting to love your youtube channel and instagram! thanks heidi for the inspiration. this is all i need right now. Now I’m determined and I’m ready to do the best I can do.
Thank you , you are such an Inspiration.

Hi heidi….you keep me going and more motivations i have and a positive mind after following up your vlog….thank you for sharing your stories to the world.

It’s a blessing that you did not give up and moved on , everything happens for a reason . ?? God had other plans for you . Keep it up and may God watch over you always.

Heidi your getting to the age when you have to s&it or get off the pot. So as a person who is alot older, been through hard times and has regrets its best to take charge and mame demands. Time waits for no one.

Heidi beautiful inside and out comes across as genuinely kind. True inspiration. Screw the haters! ✌️

I had an aneurism trying to read this