Grace Beverley is a British fitness model who’s known for her inspirational story. Grace was once a competitive gymnast who practiced the discipline for up to 20 hours per week.

However, at the age of 13, Grace suffered a serious car accident which put an end to her gymnastics career. Following the accident, she was lost; not knowing what to do with her life.

Grace eventually decided to leave her past behind, and start living like many other adolescents. Which included drinking, partying, and living the carefree life. While this helped Grace forget about her past accident, it also made her look, and feel unhealthy.

Eventually, Grace decided enough was enough. She decided to join a gym and change her diet completely. After years of ups and downs, and commitment to her quest of getting back in shape. Grace transformed her physique, and life in the process – becoming a fitness icon admired for her transformational story. 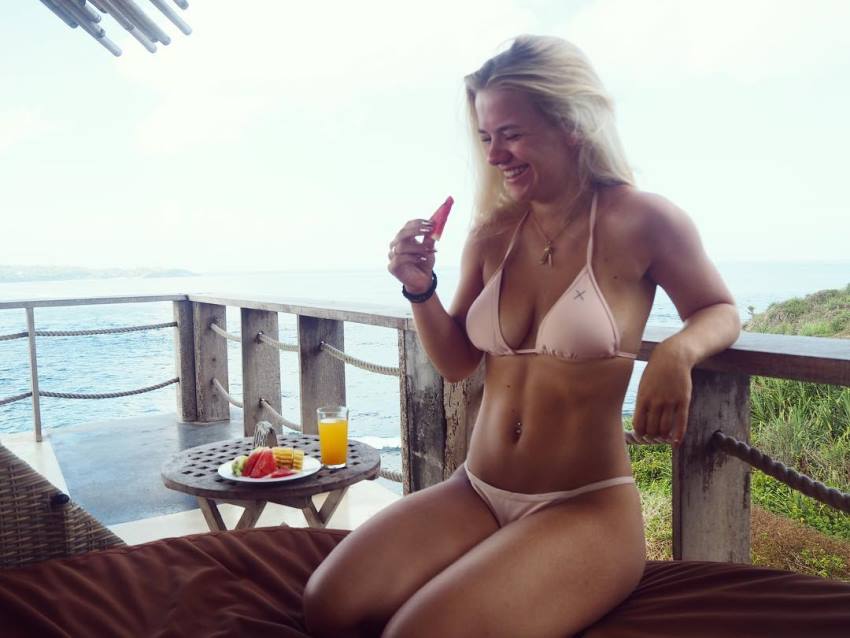 “I absolutely love what I do so balancing work and exercise feels easy. I go to the gym because I love it. And I don’t see the idea of staying in shape as a sacrifice and giving up what you love.

If I want to go out I’ll go out. If I’d like to go to the gym I’ll go to the gym. Because I love staying in shape and being strong I’ll go most days.” 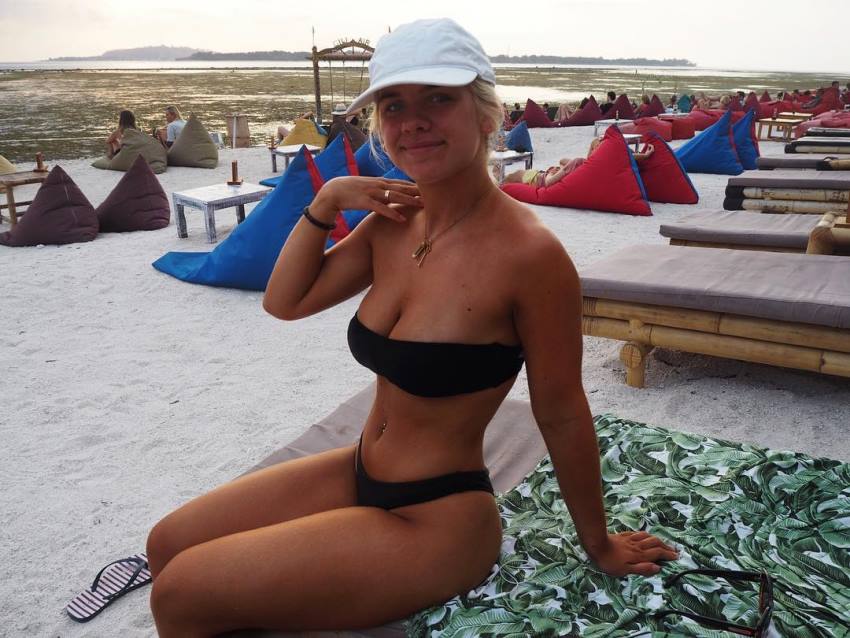 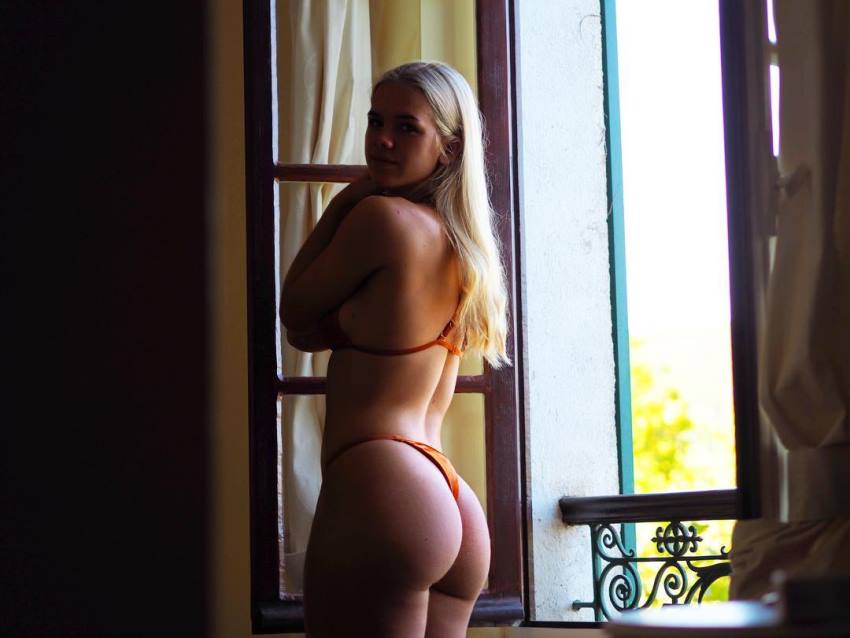 Grace Beverley was born and raised in central London. She grew up in an extremely disciplined environment, practicing gymnastics for over 16 hours per week.

While this helped Grace stay healthy and fit physically, it also made her suffer emotionally. Mainly because she didn’t have time to be with her friends.

In Grace’s words; “I was so fed up of training 16 hours a week and monitoring everything, making sure I was perfect in every situation. Being so dedicated to a sport is quite antisocial.”

However, at the age of 13, Grace was involved in a car accident; putting an end to her competitive gymnastics career. It was both a shock and a relief for Grace at the time, as she didn’t know whether to be happy or sad that her grueling gymnastics days were over.

Between the age of 13-16, Grace didn’t do any sports. She finally wanted to see what it felt like to have no obligations or competitive events coming up.

However, Grace took her new lifestyle to the extreme – without any physical activity, she started looking and feeling worse and worse. She also developed an unhealthy diet, eating pizzas, burgers, and sweets on regular occasions.

It came to a point where Grace began looking for quick fixes to get back in shape. Such as trying “fad” diets and supplements which only offered false promises.

“I needed a quick fix so completely bought into all the stuff online, all the teatoxes, ketone pills, all the fad diets. I’d skip dinner if there was a party coming up on the weekend. It was all so unhealthy and unnecessary. That was never going to work long term.” 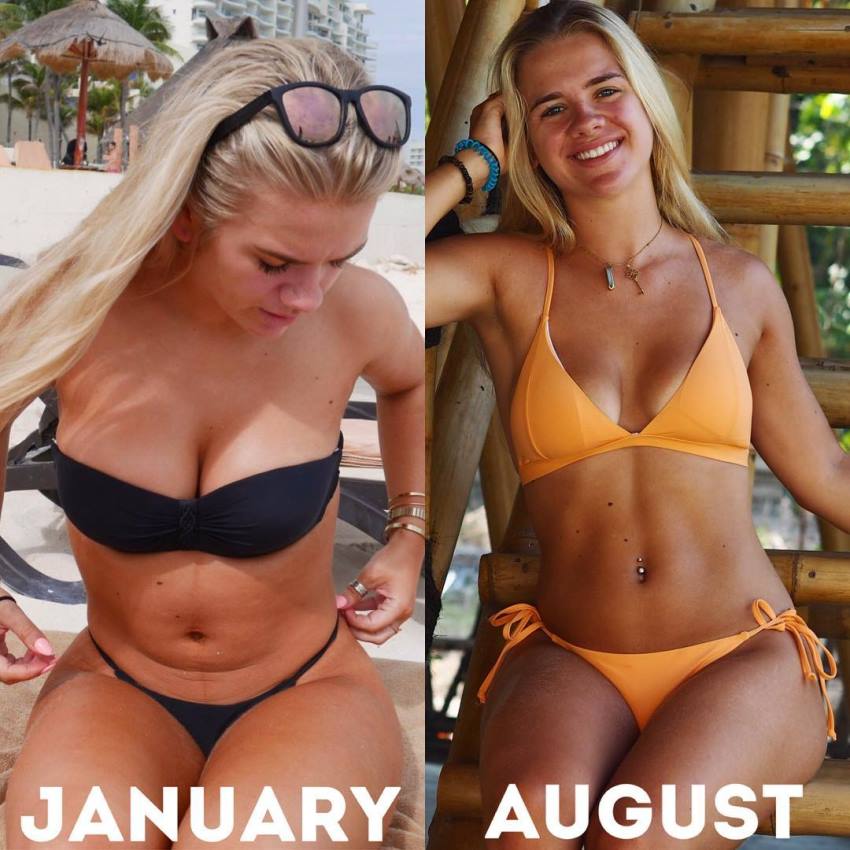 After a few years of ‘running in circles’ with her diet, Grace realized she would need to take a different, long-term approach. She then decided to join a gym in hopes of finally getting back in shape.

At first, Grace was overwhelmed with the sheer amount of equipment and machines that was available to her. Needless to say, it took her some time to adapt to training in the gym. But she didn’t give up this time.

In fact, after several months of not knowing what she was doing. Grace finally started getting the hang of her new lifestyle in the gym; slowly, but surely, getting back in shape. 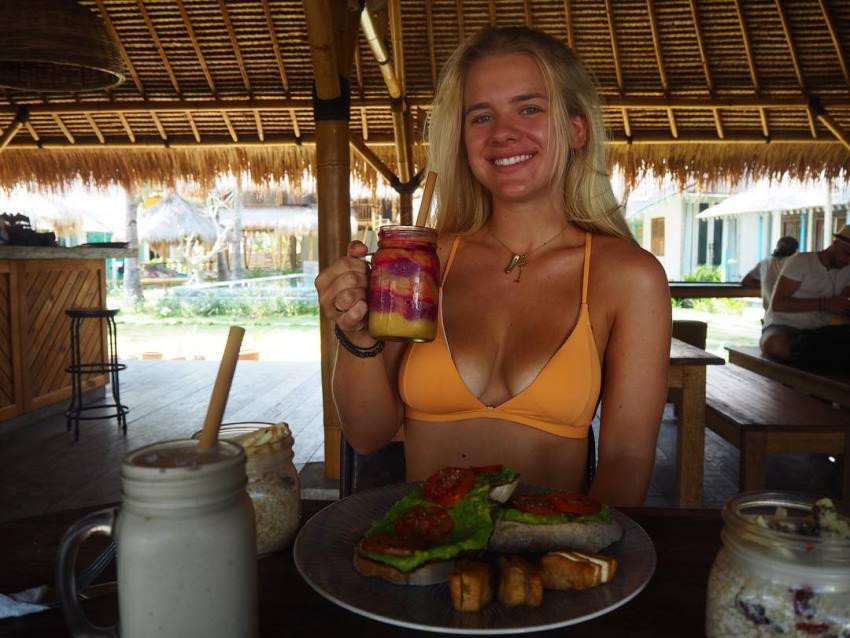 Grace was amazed by the progress she saw from working out. However, she wanted to take it a step further and document her entire journey online; using pictures and videos of her meals and training as her ‘training journal.’

Unknowingly, Grace started a whole new chapter in her life by doing so. Other fitness enthusiasts started commenting on her progress pictures, giving her words of support.

Over time, more and more people visited Grace’s social media pages. To the point that she became a minor celebrity in London.

By 2017, Grace’s recognition grew exponentially – she became a fitness star admired by people world over. 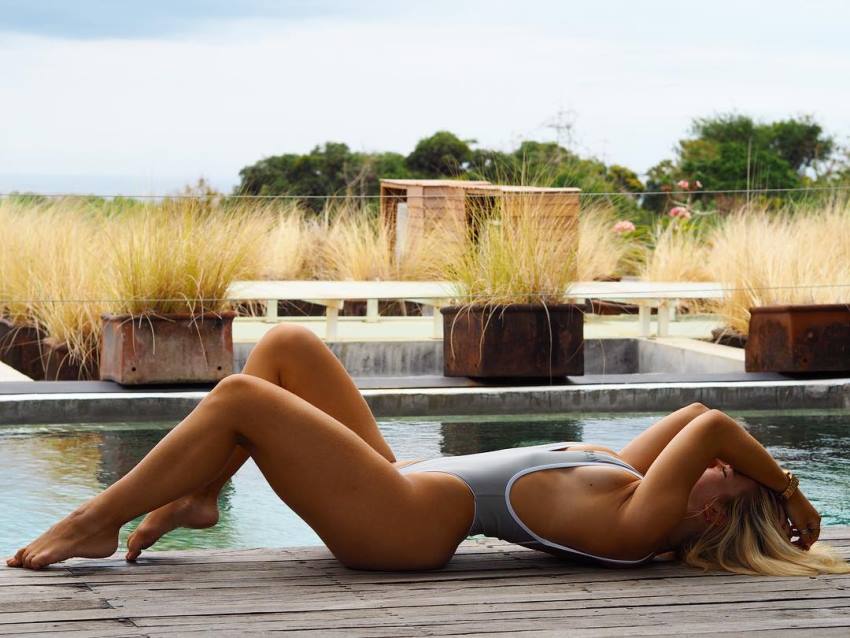 Grace is known for her toned legs and glutes, which she says are a result of years of trying different exercises and training methods.

From Grace’s experience, her legs, glutes, or any body part for that matter. Grew the most when she trained with heavy weights and lots of volume.

For that reason, Grace advises to everyone not to be afraid to lift heavy. She believes that’s the key to achieving a toned and fit look for women.

Here’s Grace talking about lifting heavy weights; “People, especially girls, think by picking up big weights they’re going to get bulky. If you can get bulky that easily then congratulations because people spend their whole lives trying to build muscle. It’s so hard. With girls, you don’t even have enough testosterone to do it that quickly.” – Grace Beverley 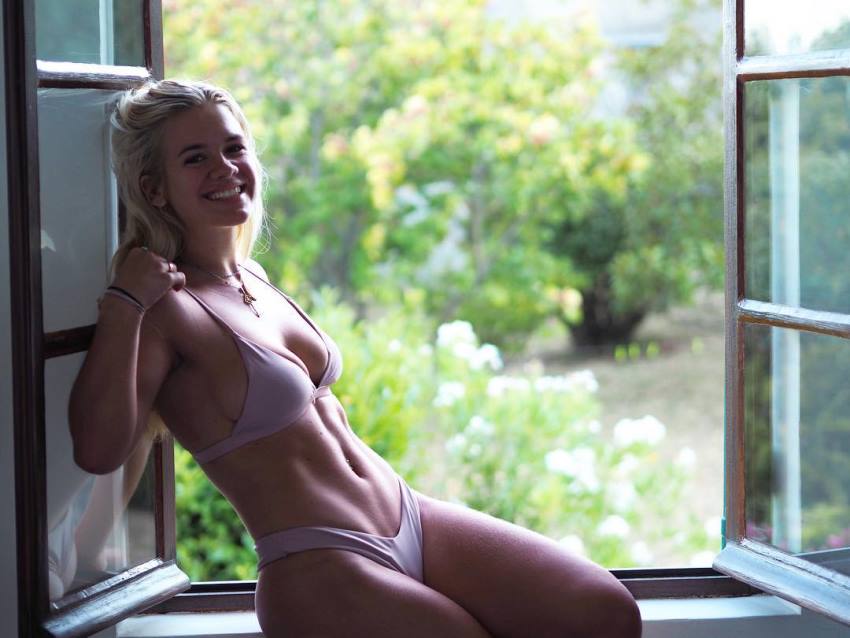 Grace says she can’t stress enough how important it is to eat when wanting to build muscle. According to her, not eating enough and training heavy is a recipe for a slow metabolism, and zero results in the gym.

Grace focuses on eating nutrient-rich foods, consuming at least five meals per day. Her biggest meal is usually the breakfast, in which she includes a lot of healthy fats and proteins. 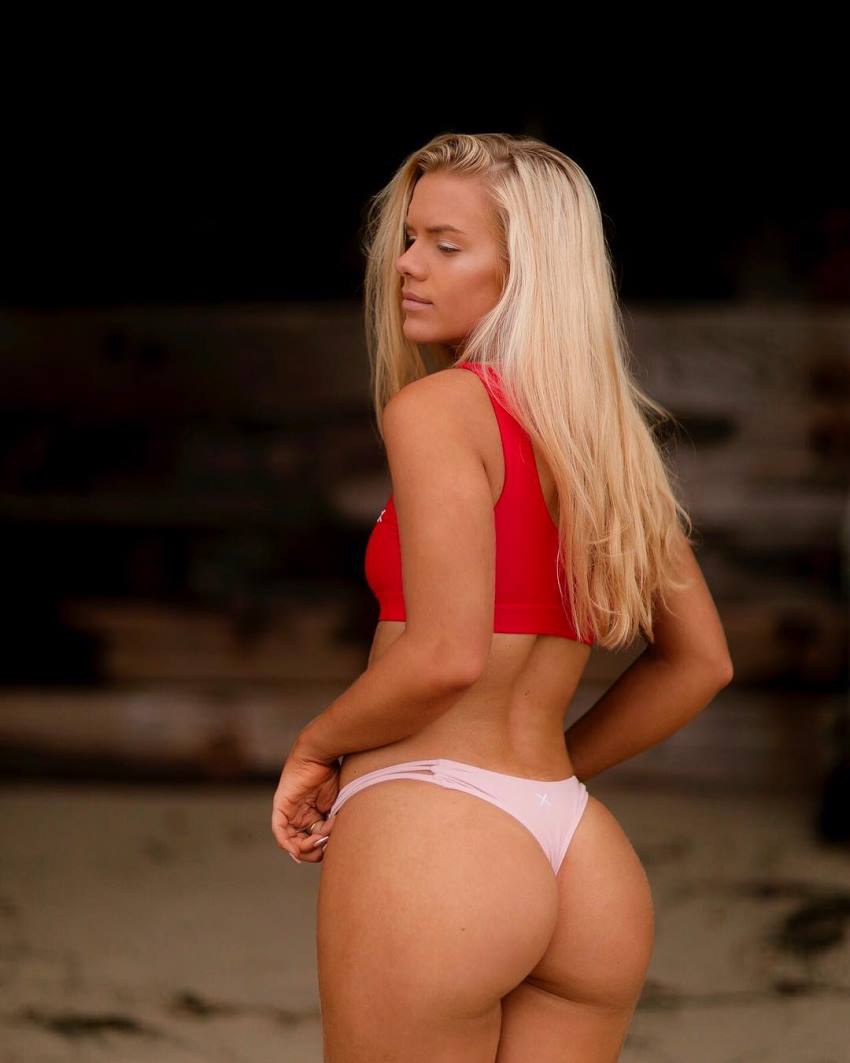 “Balance. I don’t count or monitor anything nutritionally. I just use common sense. So I won’t overly indulge but I will eat a normal meal like a lasagne without worrying about it.”

Grace’s biggest influence and inspiration on her fitness journey was herself, especially in the beginning.

Whenever she faced moments of doubt, negative comments from people, or stagnation in physique progress – she always reminded herself of her end-goal, and how happy she would be once she achieved it.

“My motivation comes from myself and how far I’ve come, not just physically but also mentally!” – Grace Beverley 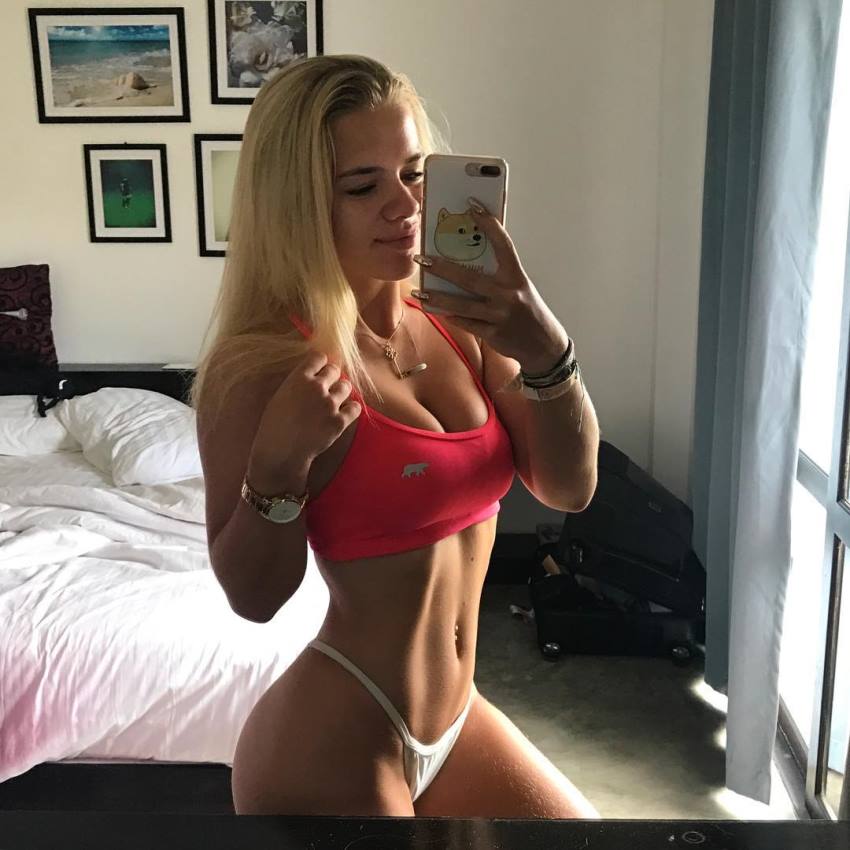 “Not everything has to be super complicated & you don’t need to follow some new trend or what every fitspo seems to be doing on social media – just take it day by day and enjoy the process.

Set small goals, find what works for you and you won’t even notice the time passing before you see the changes you always wanted. The time is going to pass anyway, you might as well make it count.”

What we can learn from Grace Beverley

Grace Beverley’s story is yet another reminder that you can overcome anything that life puts in your way, as long as you really want it.

Stay dedicated to your quest, whatever it might be. And remember that challenges are a necessary part of life, as without them, there would be no growth.

Although I’m not going to say you’re wrong, I will say you are disrespectful with the way you worded that.
She has a great physic but her butt is a main focus point for anyone who likes women because it looks great.

Training 16 hours a day isn’t extreme training. I actually laugh at that! I took private 1 on 1 figure skating lessons and did 8 to 12 hours every day for practice. And I woke up at 330 in the am to be at the ice rink by 430 am to train till 7 then shower there and go to school then come back after school and do that till I went home for dinner. Or ate dinner at the rink and practiced till the rink closed. You didn’t train at all for gymnastics. 20 hours a week. So 7 days a week is 2.5 hours a day. MAYYYBE 3 hours. That’s nothing! That’s like going for a run and then coming home and hanging out. How did you not have time for friends?!! Training so little every day. I honestly don’t get it. Try practicing for 40 hours a week 8 to 12 hours a day. AND having to be physically active along with that to be able to do the things you need to do on the ice competitively. And I wasn’t even that good!! The other girls literally lived at the rink day in and day out. So this article is ridiculous! 20 hours a week isn’t anything. Such a joke. Get out of here with your “extreme training” lmao!

Her bottom is way too big. Ditto thighs. Imagine what they’re going to look like in a few years and for the rest of her life!