Born and raised near Miami, Florida, Erin Stern is a fitness model, and bodybuilder who competes in the IFBB. She holds two Figure Olympia titles, along with numerous other fitness accolades. She’s regarded as one of the greatest Figure icons in the history of bodybuilding.

Although Erin enjoys a successful career in bodybuilding, fitness wasn’t always her first choice. In fact, for the most of her schooling years, she trained to become a professional track athlete; competing in high jumping and running.

However, after failing to qualify for the 2008 Olympic Games, Erin realized high jumping wasn’t the “right fit” for her; choosing fitness as her career path instead.

Erin didn’t regret making this decision – she’s since become one of the most familiar faces in bodybuilding, and beyond; spreading her influence on the internet through her motivational posts and pictures. 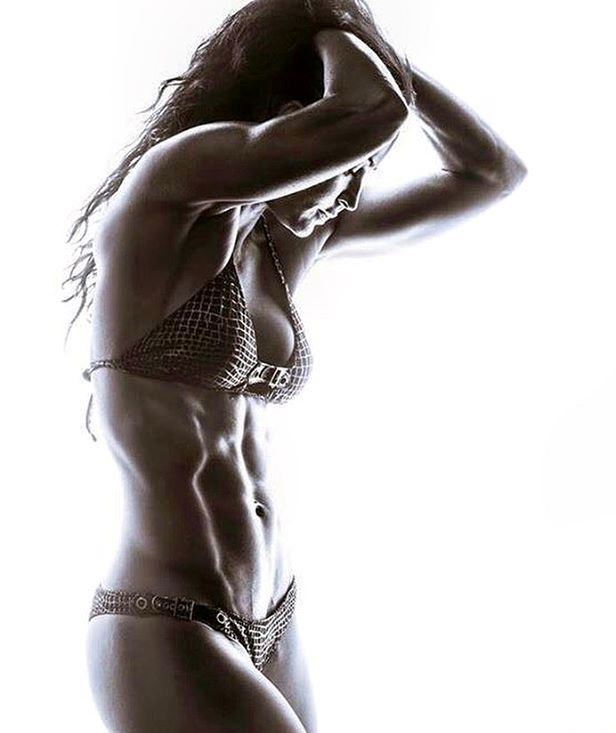 “Lift weights. It’s one of the few pastimes that allow you to carry your work with you wherever you go. Have patience. Know that results will not come all at once – but they will come. Be consistent. Success is never a linear thing. You’ll have good days, and you’ll have bad days. Bottom line – if you put the time in, you will be successful.” 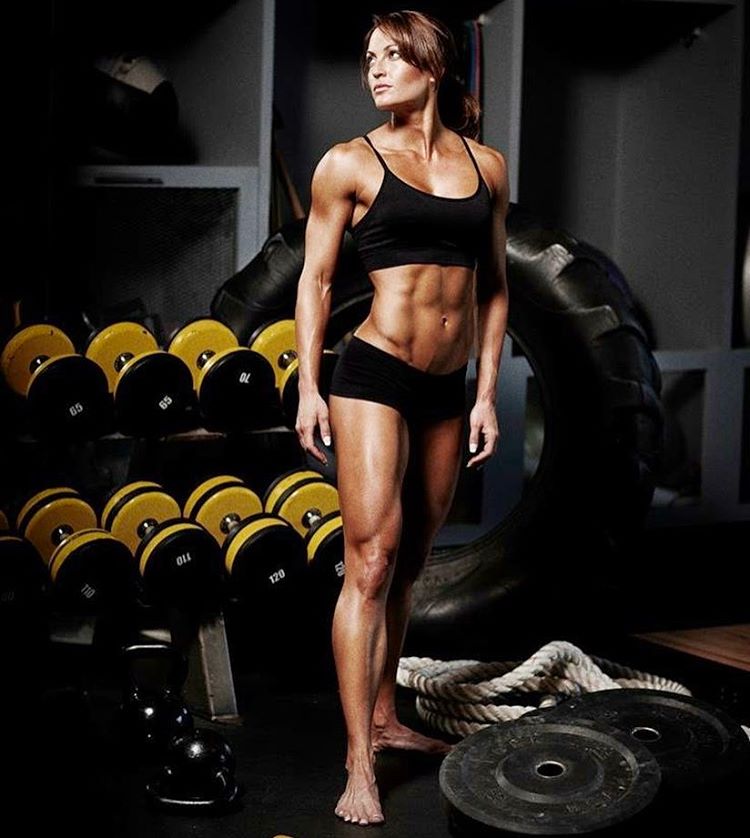 “Focus on you. Who cares what pops up your newsfeed – most likely it’s shrouded in filters and embellishments. Your opponent stares back at you…in the mirror. Your energy will never be depleted when you’re focused on what you need to do in order to accomplish your goals.” 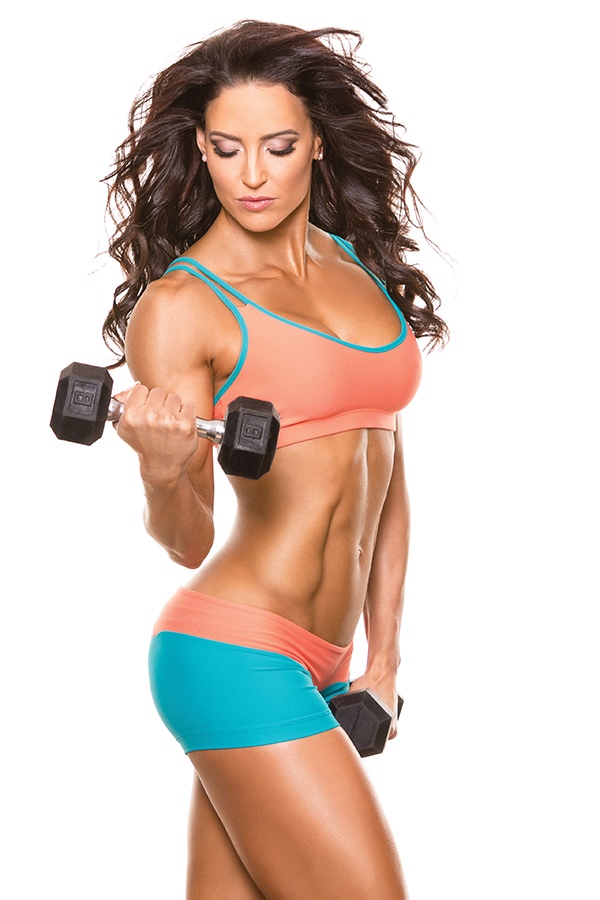 Like most famous athletes, Erin enjoyed an active youth. She spent her earliest years running, horse riding, climbing trees, and playing with her sister and father; seeking out competition “from the start.”

One day, while she ran beside her horse, Erin was approached by her father, Ira. Surprised by her amazing leaping ability, Ira told Erin she should try competitive running and jumping, aka, track.

Erin heeded her father’s advice – she started her track career in high school. Then later, earned a full scholarship to the University of Florida because of her amazing performance on the field.

She excelled at the discipline even more while she was in college; earning the status of Junior All-American in the high jump category.

Almost Qualifying for the Olympics

Following her graduation from college, Erin set a new goal in mind – becoming a professional athlete. She continued high jumping, hoping she would qualify for the 2008 Olympics in Bejing.

In the spring of 2008, she made her last attempt to qualify; clearing a 5 foot 11 jump. Unfortunately, she missed the qualifier by just three centimeters.

After failing to reach her goal, Erin came to a conclusion that she didn’t have genetic predispositions to succeed at the discipline. In her words; “I realized that being a high jumper at 5-foot-8 and close to 140 pounds, genetically it wasn’t in the cards for me to jump 6-foot-8 like a lot of the other girls are going to.”

As a result, she decided to chase a career in something else other than track and high jumping.

As she was always into fitness during high school and college, it didn’t take Erin long to make up her mind what to chase after her “departure” from athletics.

She started working out in the gym, this time, not just for the sake of performance, but for achieving a more aesthetic look as well.

“In college, I learned Olympic lifts and learned a lot about the body, but not so much about aesthetic lifting, so after college I started doing the aesthetic lifts.”

Soon, Erin built a physique that was so outstanding, that one of her close friends suggested she should compete in figure show. Still having the “competitive itch” from years of athletics, Erin accepted the suggestion. She decided it was time to prepare for her first ever fitness contest. 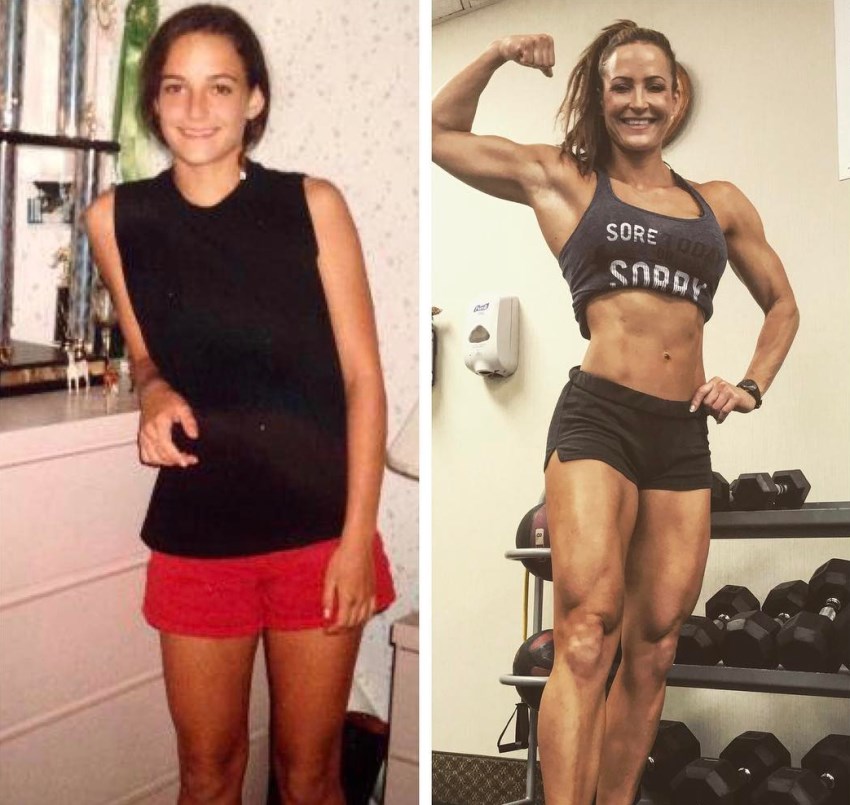 After gaining some experience in her first three local contests, Erin took part in her first big show – the 2008 NPC National Bodybuilding and Figure Championships. Amazingly, she was able to take home 1st place in the show; entering the IFBB Pro circuit in the process.

Erin says everything happened very fast – from winning her first local contest in Miami, to earning a Pro Card less than a year later. However, she didn’t want to spend time processing what happened; instead, she began preparing for her Pro debut,“enjoying the ride.”

In 2009, she made her first-time appearance on the IFBB stage, at the Arnold Classic; finishing in 10th place. Several months later, she took home 6th place in the biggest fitness competition on the planet – the 2009 Figure Olympia. That was the last time Erin placed outside the top three contestants. 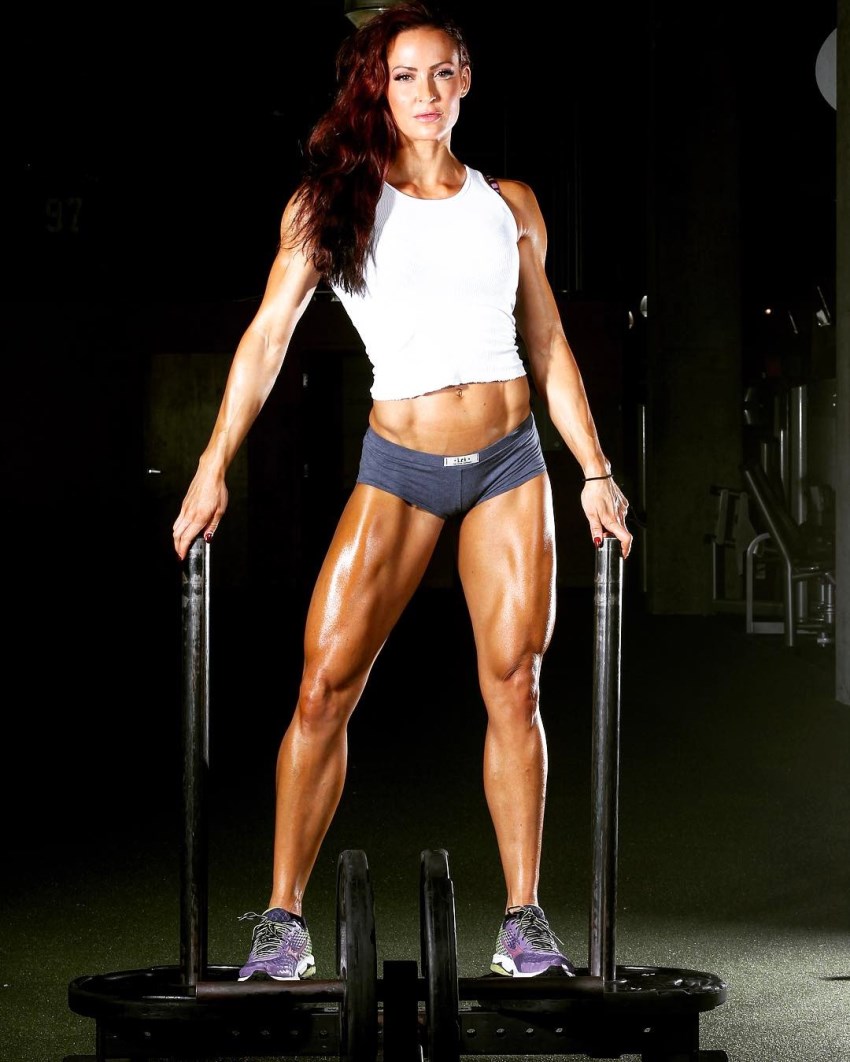 Since the 2009 Olympia, Erin has achieved several incredible milestones in her career. She’s become a two-time Figure Olympia Champion, winning the competition in 2010 and 2012, and placing top three in 17 other shows.

Alongside Nicole Wilkins, Erin was the most feared Figure contestant during the 2009-2014 period. The two created a “duopoly” in the female bodybuilding world, winning almost every major title between them during this 5-year period.

“Motivated to be better than my previous best”, Erin continues to inspire generations with her dedication to bodybuilding. 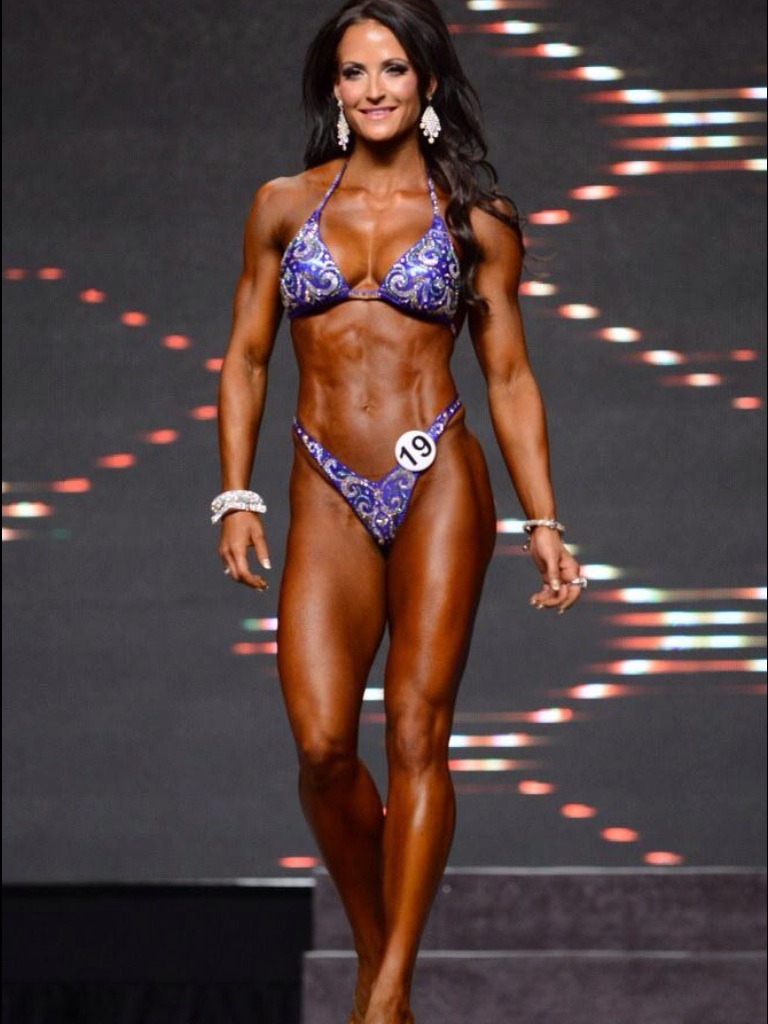 Erin has a simple, yet extremely effective approach to training. She has her own “hybrid” workout program, which focuses on high-intensity movements, and heavy weights.

“I train like a sprinter/jumper (plyos, powerlifting, and sprints) and like a bodybuilder to add aesthetic shape to my physique.” – Erin Stern

She bases her training session on compound movements such as deadlifts and squats, which help “tie” her physique together.

Erin’s essential exercises to build an outstanding physique are squats, deadlifts, bench press, rows, pull ups, and military press. According to her, these exercises by themselves are enough to build an aesthetic and muscular-looking frame.

However, if she had to pick only three exercise, they would be squats, deadlifts, and cleans.

When asked which type of cardio is the best for fat loss (normal or HIIT), Erin jokingly responded; “What is normal cardio? Is that where you chain yourself to the treadmill for hours? No thanks!” 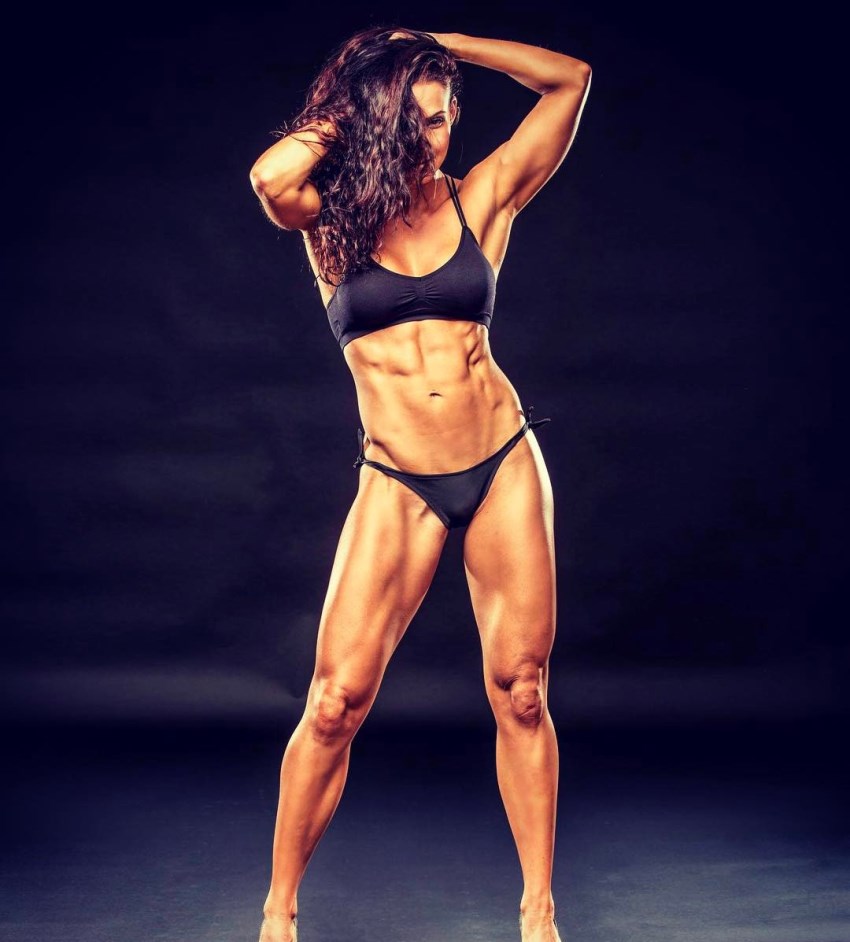 Similar as with her training, Erin follows a few basic principles which make her dieting effective, and not too difficult.

The first, and the most important principle is – “if it wasn’t around 10,000 years ago, don’t eat it”. This means her diet consists of a lot of whole foods, lean meats, vegetables, and fruits; without any room for artificial sweets and processed foods. She also avoids anything that contains gluten (except oats), and high-fat dairy.

In terms of macros, she eats high-protein, high-carb, and low-fat foods.

Looking at Erin’s diet, it’s clear that she doesn’t have a lot of freedom to indulge in cheat meals. But, she has no problems with this – as she says, “to be the best, you have to sacrifice some things.” 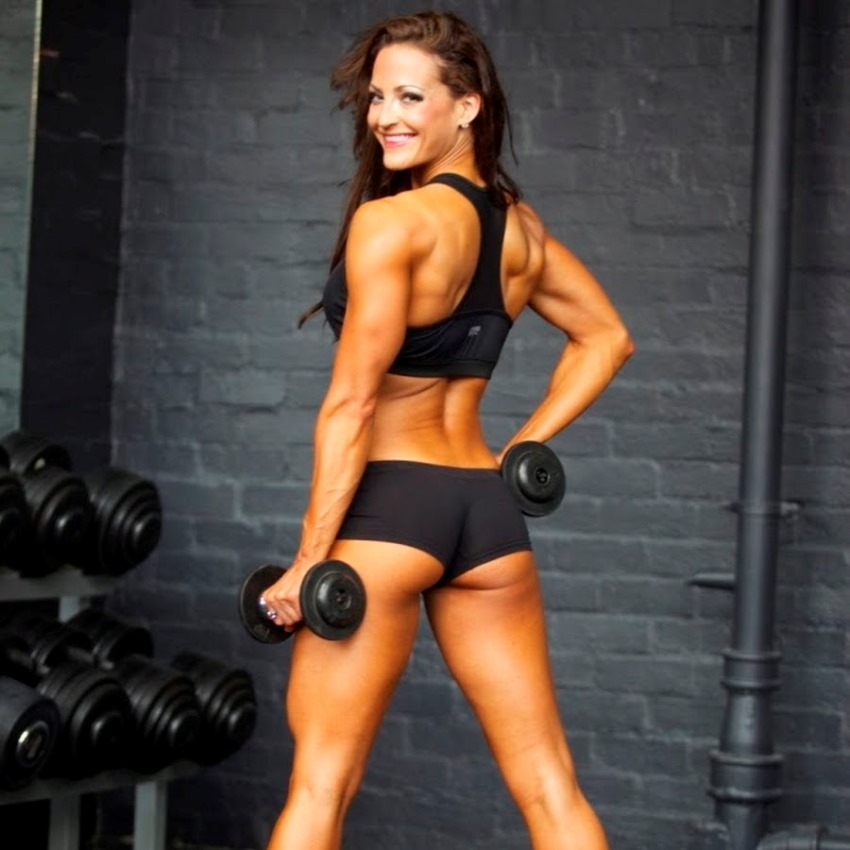 “You define success. Success is the pursuit and achievement of a worthy goal. Choose your goal, work towards it, and success is yours!”

There’s not much doubt in Erin’s mind when choosing her favorite bodybuilders. They are the legendary Austrian Oak aka Arnold Schwarzenegger, and Sergio Oliva.

Erin believes no one “comes close” to their proportions, especially Sergio’s. 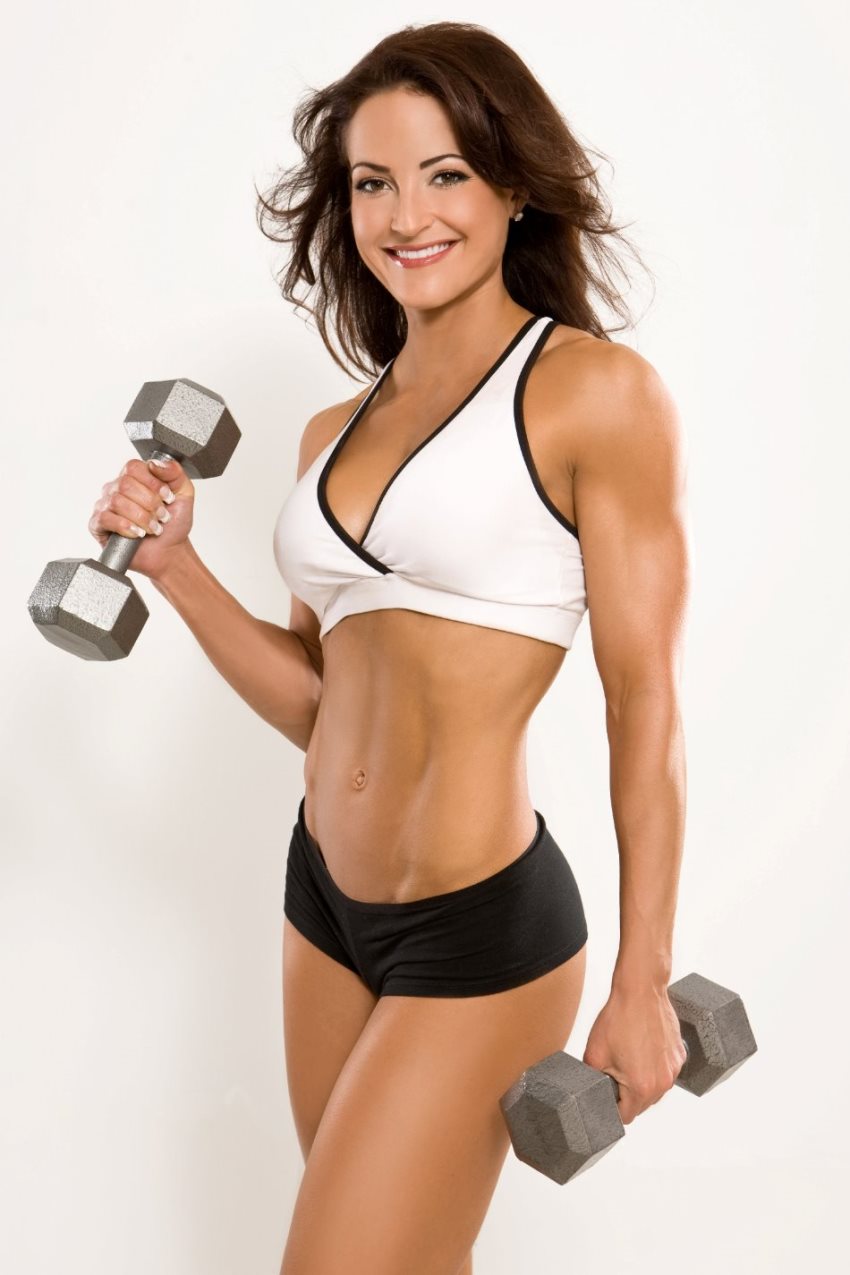 “We each have tremendous potential! But, potential itself is a static thing – without effort, it easily become ‘could’ve’ or ‘would’ve.’ Push forward every day, even if it’s a few centimeters. It brings you closer to greatness!”

What we can learn from Erin Stern

One asset in particular has helped Erin’s rise to the top – perseverance. She was naturally gifted for athleticism and sports, but had one major obstacle on her journey towards becoming an Olympic athlete – her height. As a result, she had to abandon the discipline, and look for something else to build her career upon.

But, she didn’t give up because of the obstacles she faced. Instead, she accepted everything as it was, and started her journey in fitness. She began pushing her limits every day in the gym, sculpting a physique that brought her an incredible amount of success later on.

In a way, her setback in track and field was an opportunity to choose something even better. She grabbed onto that opportunity, and hasn’t let go ever since.

It might be wise to look up to Erin’s example from time to time, in case you need the inspiration to move on from difficult events that have happened in your life. Learn from them, and keep moving forward – that way, you can achieve success, just like Erin Stern.

I love Erin! She’s classy and sweet. I like that she’s not trying to sell anything to people seeking information from her, or doing click-bait of any kind (youtube).

Erin:
I’ve been following you from some time now and my personal opinion over you is always growing…
I admire you and your simple, easy yet very serious and professional ways.
Seeing and listening to you have reminded me about how easy is life if you decide to see it that way.

I will have Erin Stern as a girlfriend forever because she is my dangerous sweetheart.

Meet the fake bitch and you won’t think so highly of her.

Loona too bad you are a hateful, lying, jealous thing. It is clear you have never met Erin Stern!!! Anyone who has ever met Erin is not only impressed by her sweetness and beauty, but also inspired by her strength and how genuine her character is. Unfortunately we cannot say the same about you!

Chesssa – I have met her and she is a sneaky manipulative bitch who will burn you the second she can… there’s a reason she has a lot of acquaintances and no friends. Yes I live in Tanpa and know her personally. Not surprising to read a comment like this about her. People who would refrain from speaking these blatant truths are merely seeking some sort of positive gain of being friends with her. I know many many people at power house gym who were friends or trying to be friends with her and they all would now second this… YOU have never met the real Erin Stern…