Corinna ‘Cory’ Everson was the first 6x Ms. Olympia champion, and one of the most recognizable figures in bodybuilding history.

Being a high-level athlete during her high school years, Corrina always seemed destined for greatness; she broke almost every sporting record and became the first multi-sport champion in her school’s history.

However, it wasn’t always easy for the legend – she suffered an near career-ending injury during the 1981 IFBB North American Bodybuilding Championship. 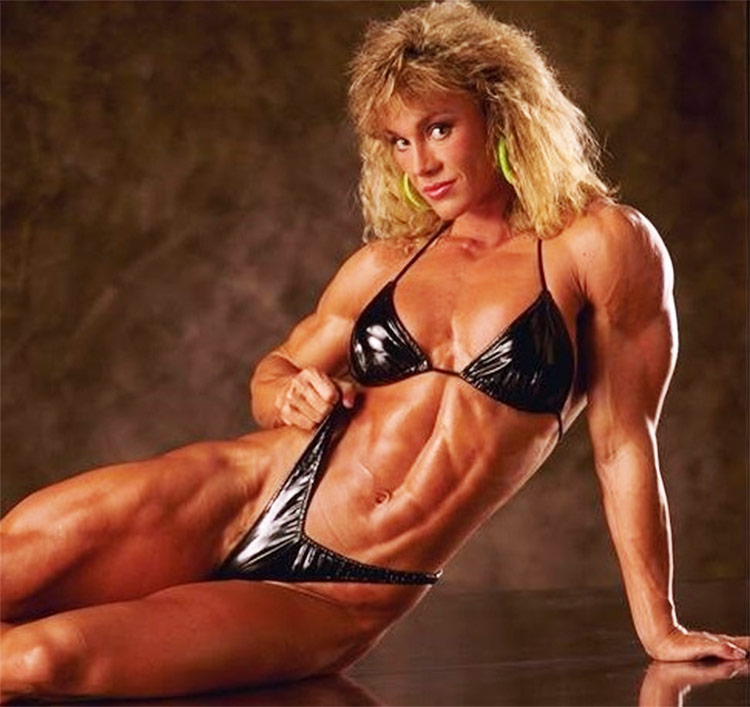 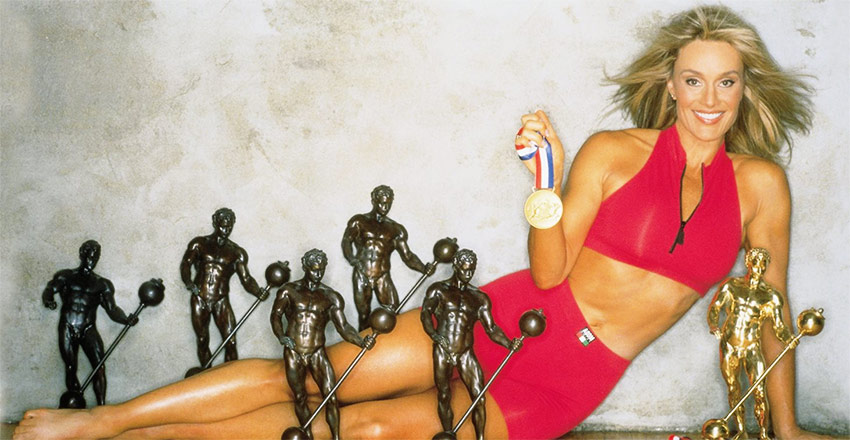 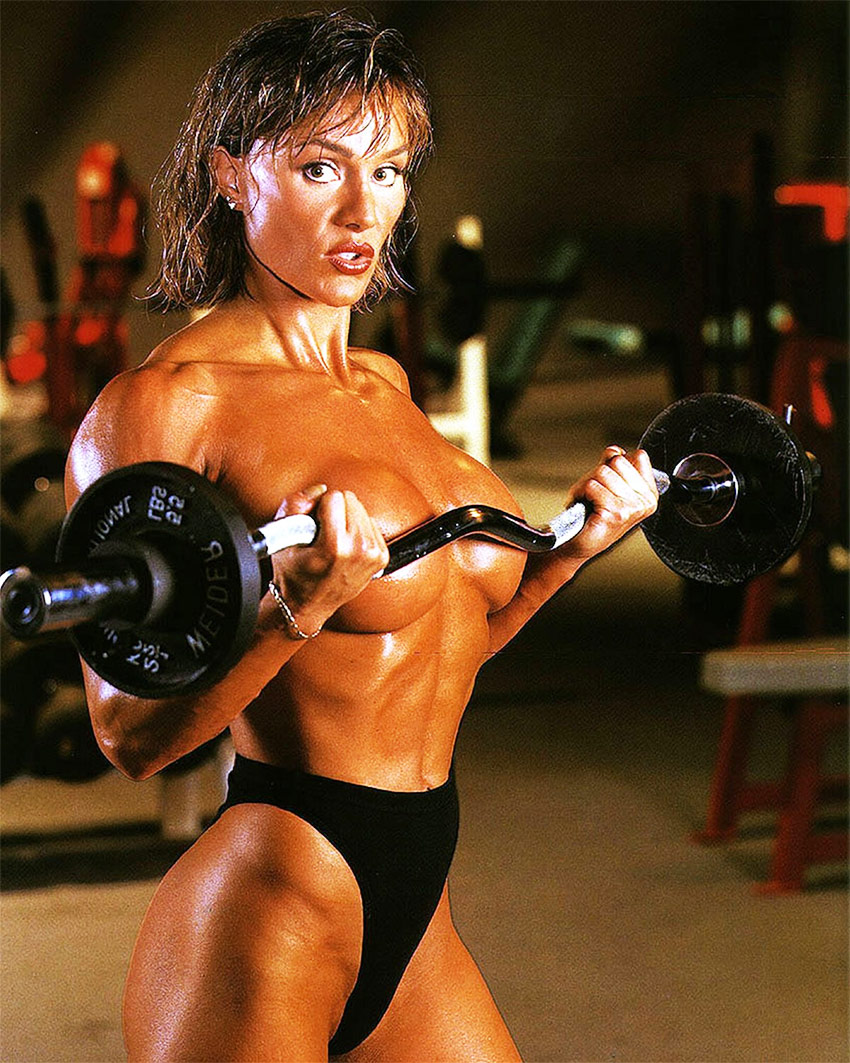 Born and raised in Wisconsin (USA), even as a child, Corinna had a natural talent for sports during high school; she was highly skilled in sports including gymnastics, track & field, and badminton.

It soon became clear that she was destined for greatness as an athlete after she broke numerous records – becoming one of the first multi-sport champions in her school.

As a result, she was accepted into the University of Wisconsin-Madison, where she chose to study Physical Education.

During her time at college, Corrina further excelled at sports; she competed 3 times in the American Pentathlon – taking home the trophy each time.

However, it wasn’t until she befriended a amateur bodybuilder that she took an interest in weight-lifting. It was here when Corrina started her fitness journey, training mostly for aesthetics, rather than just performance, for the first time in her life. 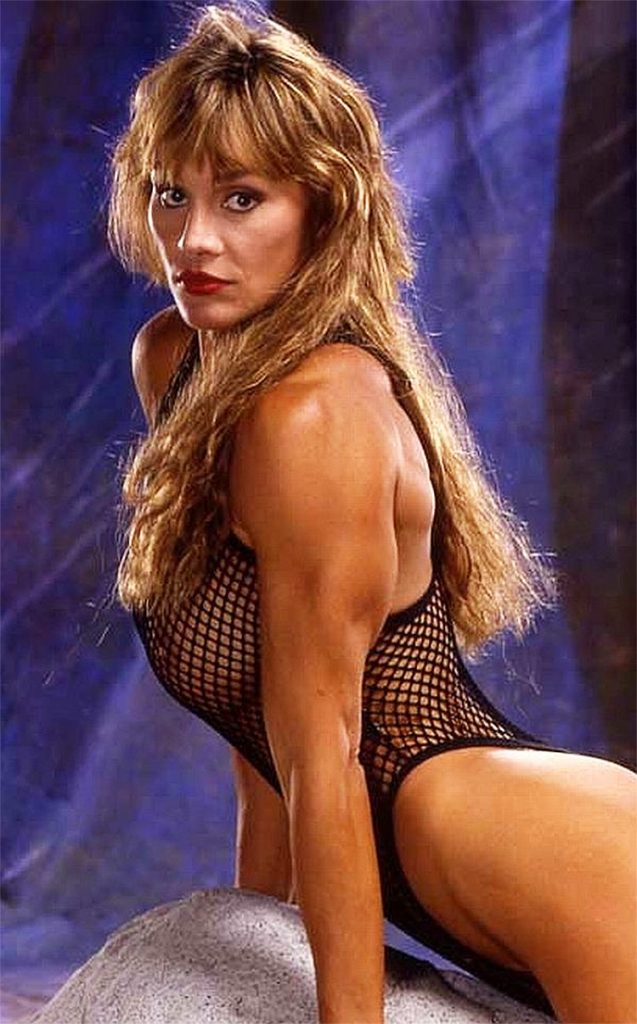 After experiencing success in her first competition (the 1980 Ms. Mid America), it wasn’t long until Corrina found herself posing on stage in the 1981 IFBB North American Bodybuilding Championships. However, it didn’t turn out to be the dream ending she wished for.

As Corrina was performing for the judges, she felt a sharp pain in her left foot. Although she attempted to fight through the pain, she was sent to the hospital for urgent treatment – the source of her pain was diagnosed as blood clots, and she narrowly missed being forced to suffer an amputation.

But she didn’t let this get her down; Corrina found herself more motivated than ever to return to the stage and make a name for herself as a female bodybuilder.

Return To The Stage

After making a full recovery from her injury and returning to the gym, Corrina didn’t hesistate in entering further competitions. Over the course of 3 years, the future fitness star entered a huge 13 shows – earning 8 trophies during this period.

However, it wasn’t until 1984 when she really established herself as the leading female bodybuilder in the world. 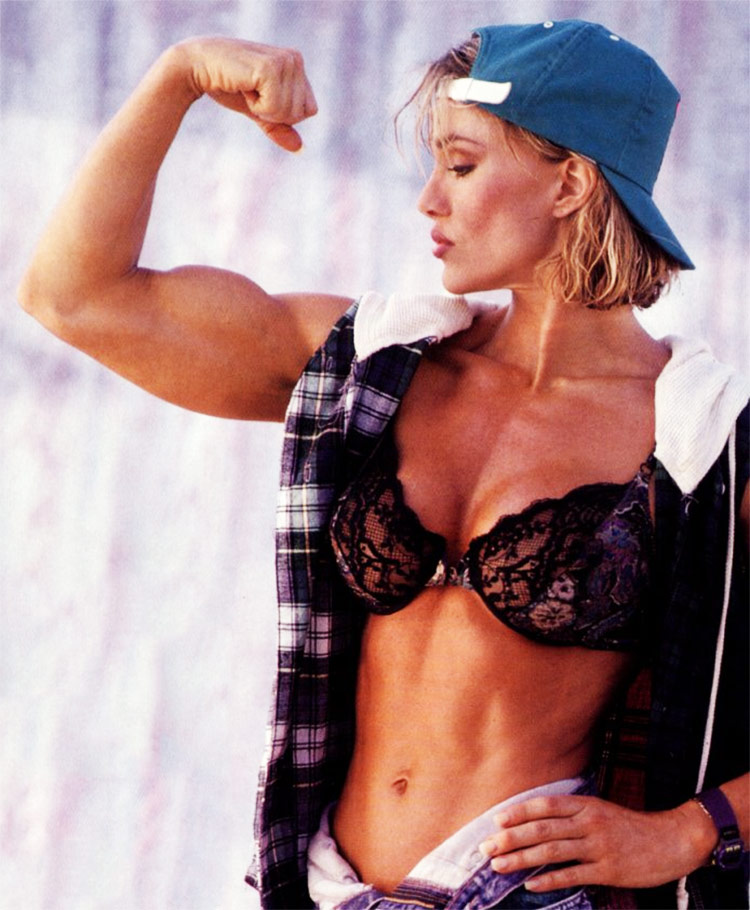 After winning the 1984 NPC Nationals, Corrina qualified to appear in the most prestigious show in the industry – the 1984 Ms. Olympia.

The future legend was competing against female fitness icons, such as Rachel McLish. But she didn’t let this stop her.

Corrina left the stage after being crowned the champion of the show – instantly being thrown in the spotlight, becoming recognized as the best bikini athlete in the world.

Corinna spent the next 5 years dominating the female bodybuilding category. She placed 1st in every Ms. Olympia competition during this period, making history by establishing herself as the most successful female athlete in history. 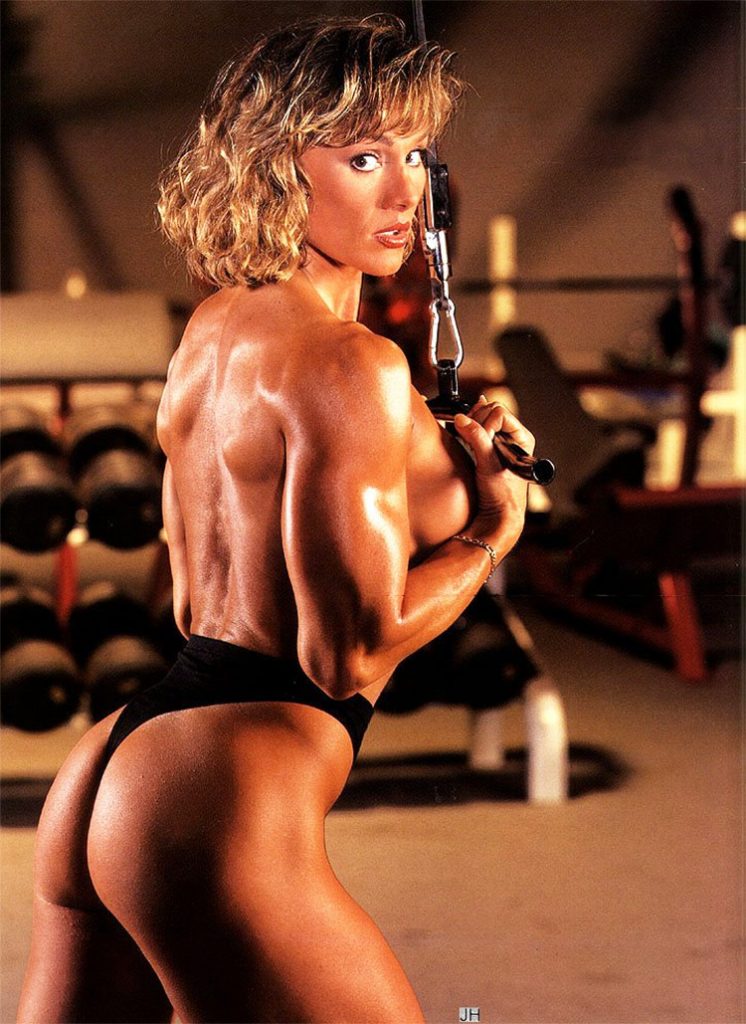 Corinna is well-known for her perfectly proportioned figure, and she strongly believes that lifting weights in the gym is the key for women to achieve this.

In her prime, the fitness icon enjoyed training multiple muscle groups per session, apart when she trained legs. 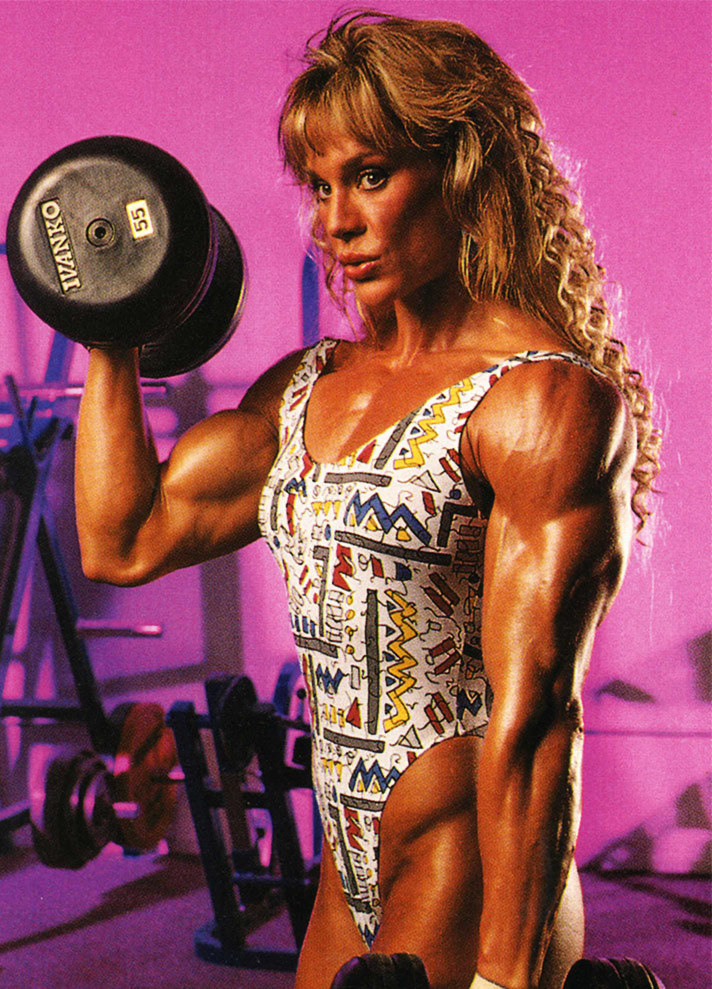 In terms of dieting, Corinna Everson didn’t follow any strict or restrictive eating patterns; she believes this is what leads others into pre-diet binge eating and gaining too much body fat.

However, she encourages others to follow a clean diet, without restricting their lifestyle – Corinna doesn’t believe that achieving an ideal figure results in a limited lifestyle.

Inspired to reach your maximum potential like Corinna? Read our comprehensive guide on how fat burner supplements can really up your game! 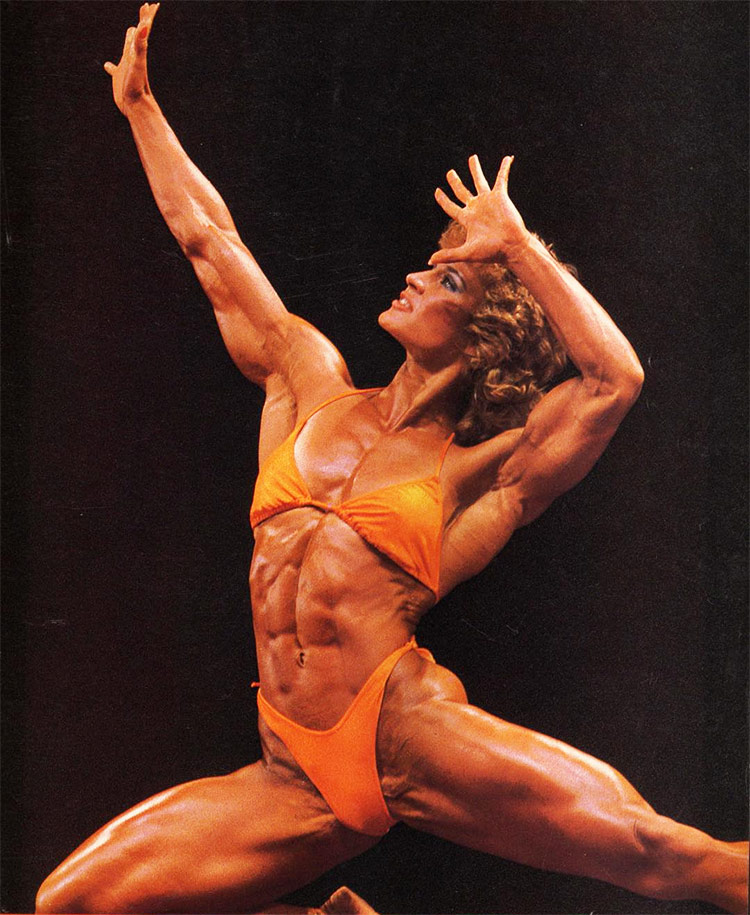 Although Corrina has become a female fitness icon, she looked up to numerous athletes during her reign as the 6x Ms. Olympia Champion – she specifically names Rachel McLish, Gladys Porugues and Carla Dunlap as sources of motivation.

However, she names other male bodybuilders as her main influences – they often helped transport her to the gym and encouraged her to train with them (the likes of Lee Haney, Bob Paris, Rich Gaspari, and Matt Mendenhall. 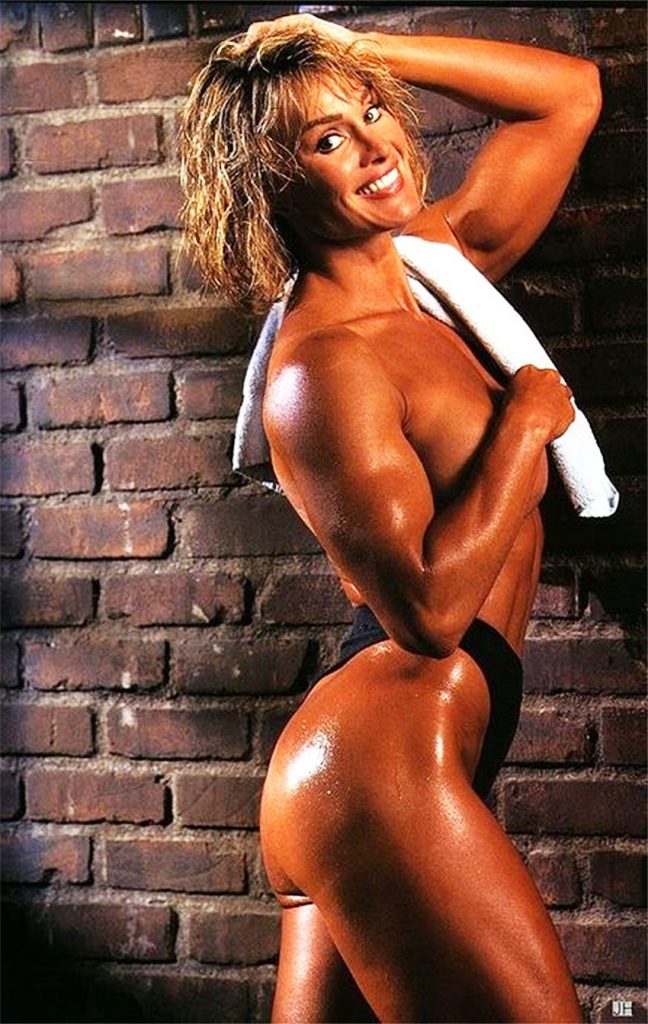 What We Can Learn From Corinna Everson

Although Corinna was always an extremely gifted athlete, she still had the right determination and willingness to success  – she suffered a potentially career-ending blood clot injury towards the start of her journey, but she came back stronger to make history as a female athlete.

If we can learn anything from Corinna, it’s that you need to work hard, regardless of genetic potential – Corinna started her journey in better shape than most, but she still worked hard to further sculpt one of the most iconic figures in bodybuilding history.

can’t forget the old school ! she was one of the best!

I will always love you “Cory”.

“Better than anyone, Anyone I ever met..”

Looks better than any other female body builder I’ve ever seen! Actually quite beautiful!

Tops the list. Legendary! I was a young elementary kid in awe of her during her prime.

She is , to this day, my greatest inspiration.. i have looked to Cory for motivation for years.. she is truly the greatest..

Still looking good,still my idol regardless,I admire you in so any ways,you have achieved a LOT till this day,loved you then,and love you now with all your strength and ability to influence women in body building,simplify the best,one of a kind,you go girl

Use to watch her fitness show back in the day . Loved her big inspiration to men and women

One of the few that stayed feminine despite her strength. I admire that .

The Best Female Bodybuilding figure that I have ever seen smart, strong,and Beautiful. I have looked up to you sence I was a little girl. What would you tell a child that wanted to follow in your footsteps now. Love and admire you Greatly.

You’ll always be my favorite female bodybuilder. I was so happy when I finally met you at a gym opening in San Leandro back in 1990, I think that was the year. So long ago. I have so much respect for you.

Cory was to female bodybuilding what Arnold was to men’s bodybuilding. Simply the very best ever! She had it all!!

Cory you was a great body builder. I followed your career from the git. I did use some techniques of yours and your x (sorry). I tried stay ‘n with it but I started a family, but still I got in 3 days sere. You proved me and a bunch that women can lift and body build, you looked great.

I really never heard of Cory until i saw the movie Double Impact. She inspired me to take interest in my own body. Thank you Cory. By the way you look stunning at 61.

[…] Cory believes that weightlifting is the key to having an amazing figure, and has shared her workout routine which she used during those years when she competed at Ms. Olympia – her exact training routine can be found on the greatestphysiques website. […]

Love Cory but i prefer Rachel…

Cory,
Elaine Lalanne asked me to reach out to you about our new book project, Pride & Discipline – The Legacy of Jack LaLanne: In His Own Words.

We would like to have you share your thoughts and experiences with Jack, and his impact and legacy.  Our book will launch at the IDEA World Convention in July, 2020.

Thank you for your consideration.