Callie Bundy is a fitness model from Milford, Connecticut who spent most of her life as a sports enthusiast. Since she was a child, Callie would always participate in a variety of physical activities, such as soccer, basketball, and softball.

Her passion for sports soon started to weaken as she discovered something new – fitness modeling. She then quickly developed an interest in weight training and eventually, started to compete in the NPC bikini shows – later, earning a status of an IFBB Pro Bikini Competitor.

Besides being a fitness model, Callie is also a TV personality and a wellness promoter. 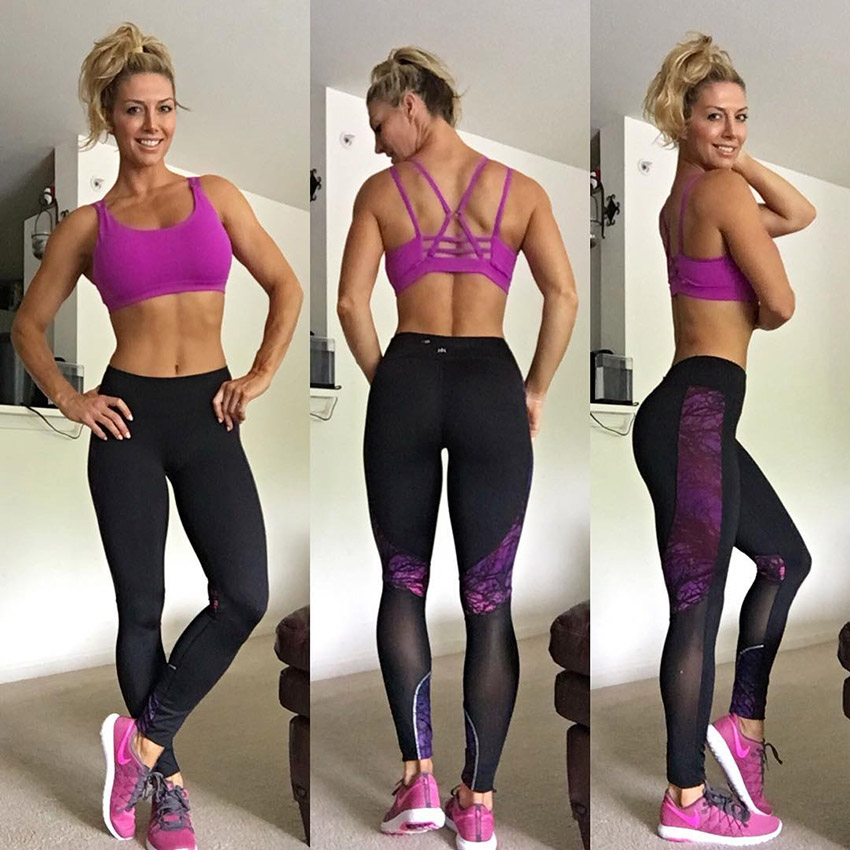 “When my legs are sore, the goal is just try to move them. So I go out with the intention of a walk, then when they start to loosen up I add in 30-second jog intervals. Not intense, I’m not trying to put any more stress on the muscles just get things moving so they can heal faster with blood flow, oxygen, lactic acid etc.” 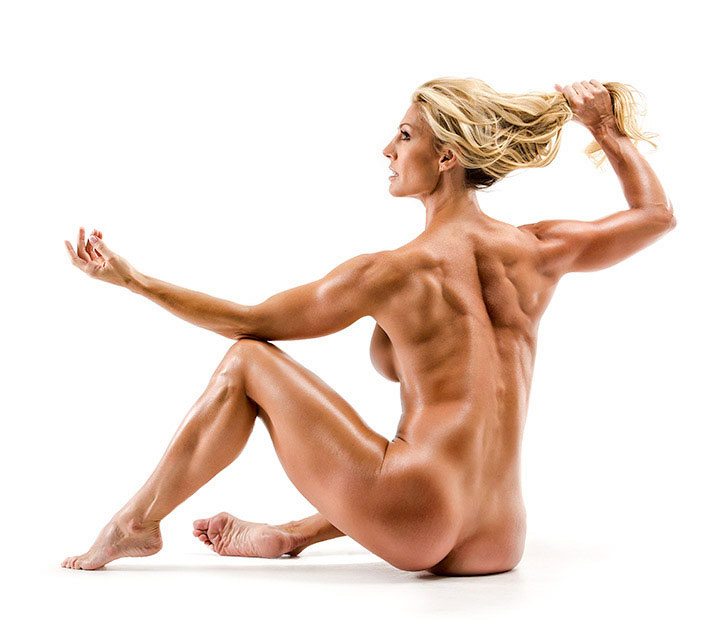 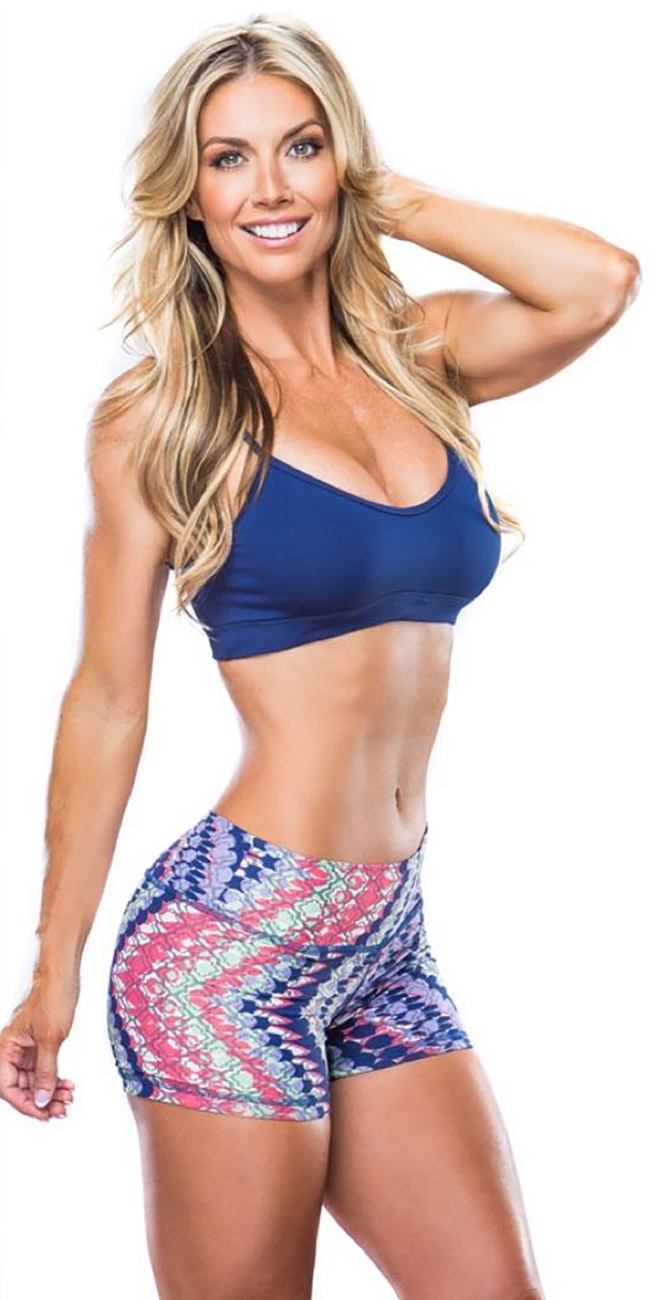 “There’s a lot that you can learn from competing, but I would have to say after a competition I look back at my physique & think OK I worked hard it showed, but where can I improve? Then after my next comp, I show improvement in that area. That’s cool, knowing that you can constantly be improving. That’s how you’ll grow, not by winning shows or trying to be ‘perfect’.”

Callie was born and raised in a coastal city of Milford, Connecticut. As a child, she would always participate in sporting activities with her family and close friends. In her 3rd grade journal, Callie wrote: “I like sports, eating & sleeping. In my spare time, I do my homework.”

In high school, she played 3 different sports and was always one of the best. First, she started with soccer, and later she showed an interest in basketball and softball.

When she entered college, Callie’s main goal was to be the best in softball. Callie went on to play NCAA Division 1 Softball while in college.

Eventually, Callie graduated and earned a degree in Business Marketing. After college, she started to contemplate about other activities she could do. Her passion for sports inevitably led to her love for fitness and weight training.

Callie started working hard on developing her body – she created strict eating habits, which she admitted was unusual for her at first. She was used to constant physical activity, and because of her fast metabolism, she could get away with unhealthy eating from time to time.

But Callie knew that if she wanted to compete, she would need to completely restructure her diet while training in the gym. After adopting her new regime, Callie’s body quickly started to transform –  she was amazed by the changes that started to show.

After months of hard work, Callie started to compete in National Physique Committee shows. Her first professional competition came in 2012 where she placed 11th.

Only 1 year after the first competition, Callie managed to take home 2nd place in 2012 NPC Metropolitan Championships, and there was no sign of her slowing down after this point. 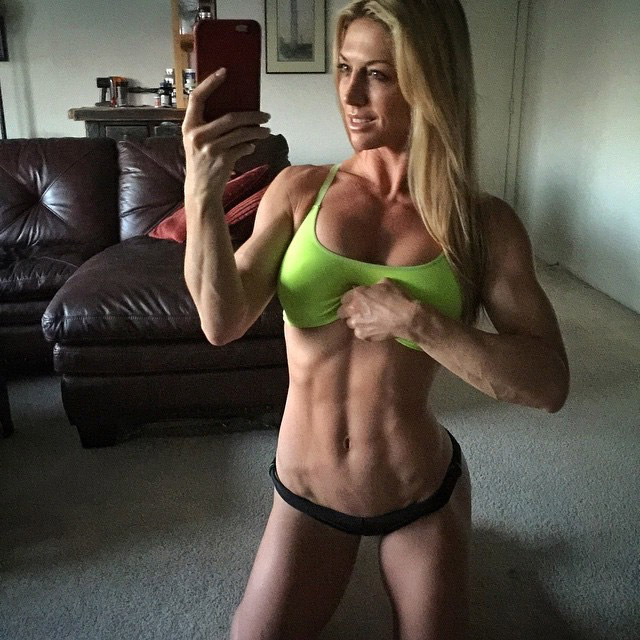 In the same year that she placed 2nd in NPC Metropolitan Championships, Callie also managed to win one of the most prestigious shows in the industry – NPC Jay Cutler Classic 2012. She also came in 1st in 2012 NPC Bev Francis Atlantic States, and placed 3rd at the 2012 NPC Team Universe Championships.

There were several more shows in which the American participated, one of them being the 2012 IFBB North American Championships, where she came in a respectable 6th place.

Needless to say, Callie was amazed by her own journey and success as she continued to compete for some time after winning the Bikini Pro title.

When she’s not training or competing, Callie hosts a variety of TV shows and models for different magazines and agencies. She also has a large number of followers on social media who are inspired by her story and pictures.

When asked how does she stay motivated to excel at so many different things, she says; “To me, that would be like asking someone ‘how do you remember to eat’ or ‘how do you know to put a coat on when it’s cold’. It’s innate intelligence that has been burnt into my M.O (mode of operation) through my years of playing sports and my constant pursuit of wanting to perform at my fullest potential.” 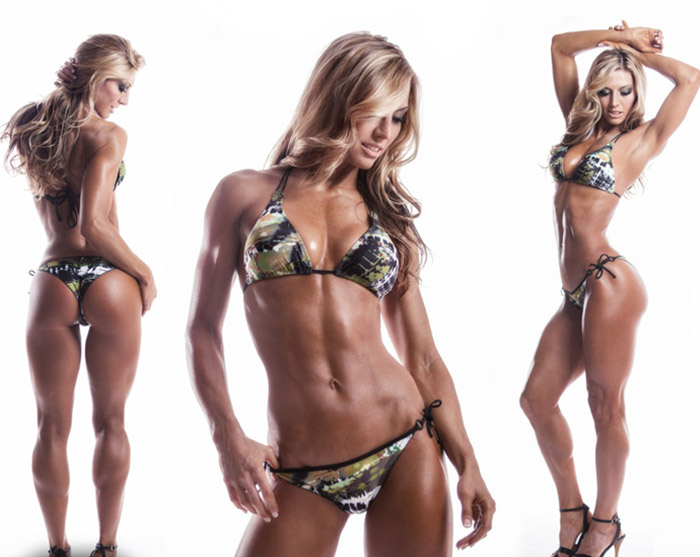 “This isn’t a sport about being ‘perfect’ or ‘skinny.’ It’s about bodybuilding, just say it out loud…bodybuilding. Whatever division you compete in! Building your body, which takes time & consistent work through not only fitness, but nutrition, body and mind.”

Callie’s training philosophy is – “slow progress is the real progress.” She continuously stresses the importance of not rushing the workout or results. Because, if she is not enjoying the journey, she may as well give up, says Callie.

The glutes and hamstrings are Callies’ favorite body parts to train. She admits she had to train them for a long time before they became as impressive as they are now. Same goes for her abs, which she trained for months on end before she could proudly show them to the world.

According to Callie, her favorite exercises are squats, good mornings, and shoulders press. She says squats are the main reason for her gluteus development, and that shoulder press provides her with an incredible arm pump afterward.

Callie likes to train on a daily basis, and these are some of the exercises she does: 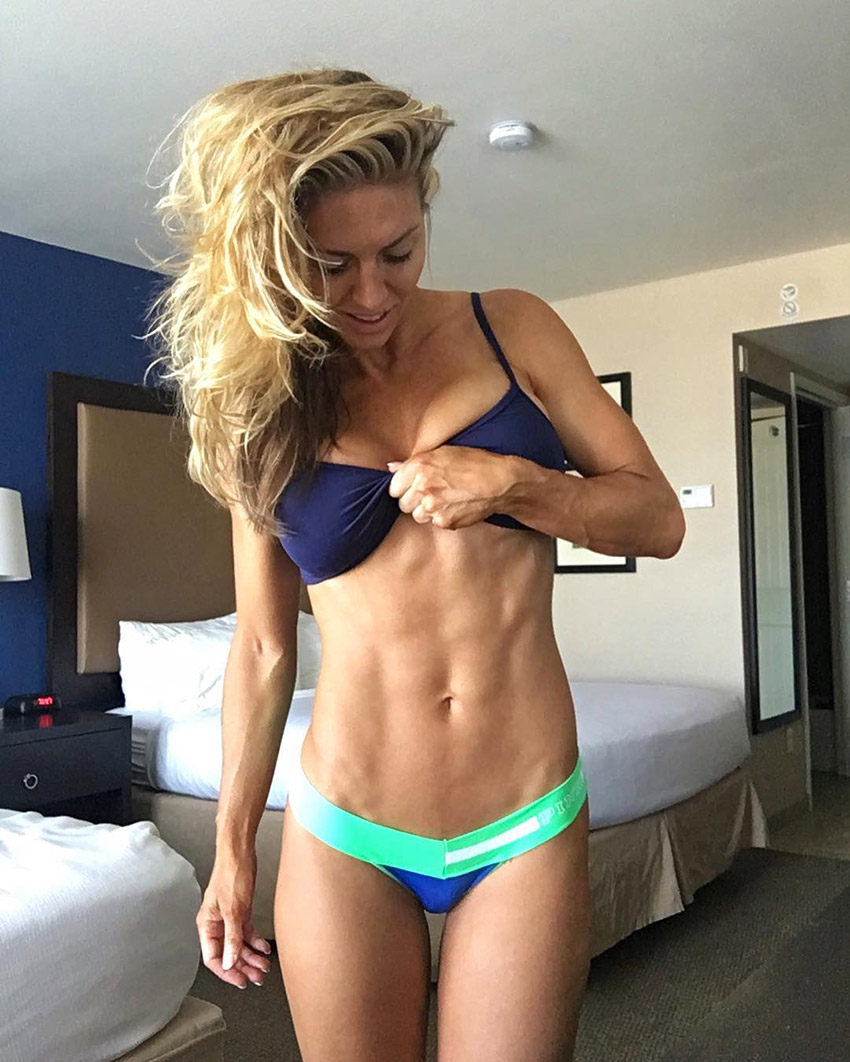 “I don’t really get cravings, because I don’t really deprive myself of anything. I figure if you want it, have it. Otherwise you slowly eat everything else in sight but that.”

Callie’s philosophy on diet is that one should never restrict their choices. She says she mostly eats healthily, but whenever her mind craves something, she eats it.

When asked if she always eats organic, Callie admitted: “I think it’s just like eating; it’s not about being perfect but always trying to make better choices at least 80 percent of the time. So whenever possible I will buy organic, but I don’t get crazy with it. If I’m somewhere and it’s not an option, I consider that part of my 20 percent and keep it moving.”

Tips to Getting in Shape

Callie shared some of her favorite tips on how to get in shape, and they are;

1.” Start with your mind, you have to be open to it and want it for you.”
2. “Drink water”
3. “Be consistent.”
4. “Remember SLOW progress, is REAL progress.”
5. “Enjoy the ENTIRE process; learn from your ‘failures’. Those will make you strongest in the LONG RUN mentally, physically & that’s what matters” – Callie Bundy

Inspired to reach your maximum potential like Callie? Read our comprehensive guide on how fat burner supplements can really up your game! 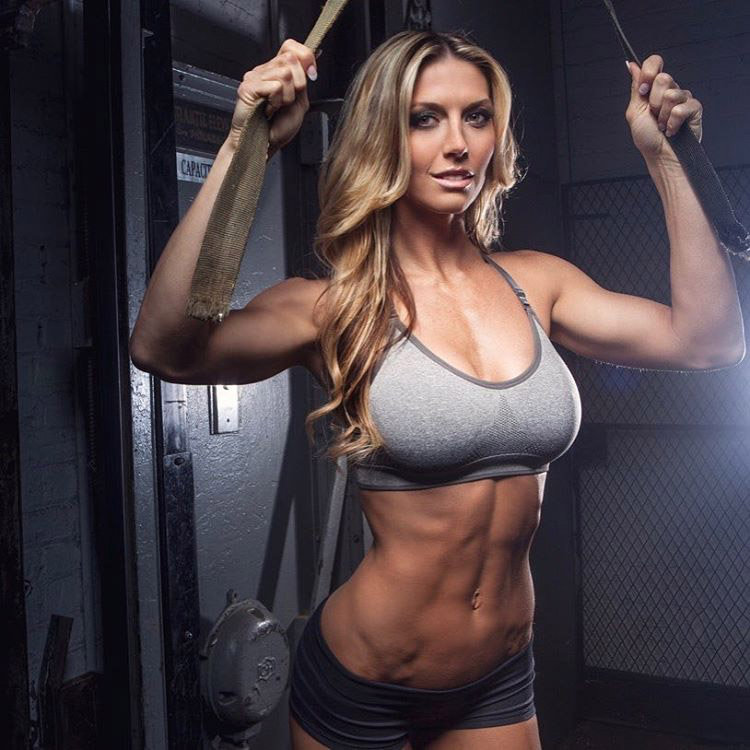 Callie admits that she doesn’t only look at the “outer shell”, but also a personality and mentality of a person. She says that Yeshaira Robles and Jaime Baird were one of the most inspiring people that she met.

Here’s Callie talking about her two favorite idols; “from head to toe, you don’t get much more of a complete package than those ladies. I have met both in person, they’re as graceful & classy on the stage that they are off.” 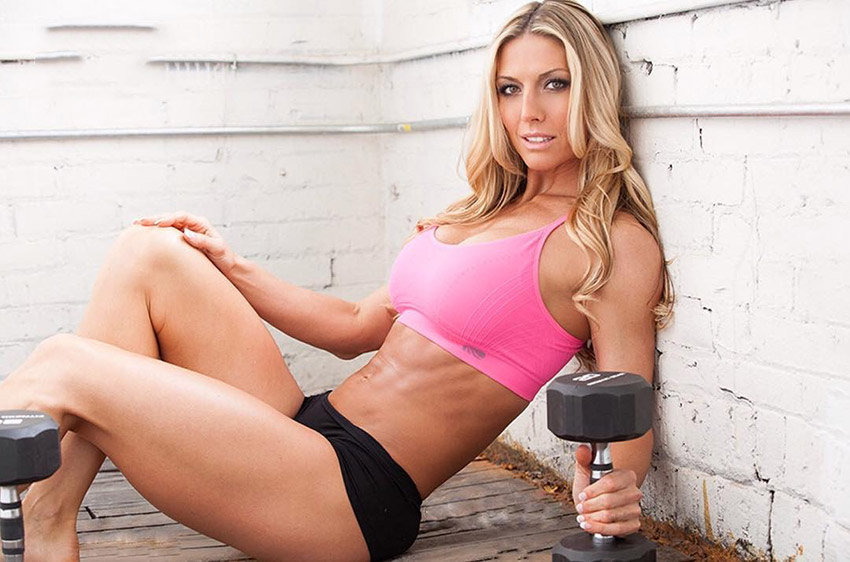 What we can learn from Callie Bundy

Callie Bundy taught us the importance of having set goals and being determined, but also not to take life too seriously, especially when it comes to dieting.

For her, dieting is simply a lifestyle, but that doesn’t mean she won’t allow herself to eat what her body wants or needs.

What we can learn from Callie is that we should always strive for greatness, but also stop to take a look around and appreciate what’s in our lives from time to time.

What a woman! Callie Bundy helped me get back into the gym after a big drop in motivation. Keep going girl!

Excessive use of photoshop enhancement techniques. Not particularly athletic.

Athletic and “in-shape” are 2 different things. Sadly, today many people are so narcissistic. I’m not saying this applies to everyone but all of the selfies, etc, is certainly a warning sign.

She’s athletic. She was a great softball player when she was younger. Do your research? Lol

She was one of the best softball players around… not athletic??? WTF are you smoking?? Smfh