Hailing from sunny California, TJ Hoban is a WBFF Pro fitness model, actor, trainer, and entrepreneur. With over 150 magazine covers, he’s one of the most sought-after fitness models in the industry.

However, TJ started his journey as an underweight teenager who had low self-esteem, and no sense of direction in his life. 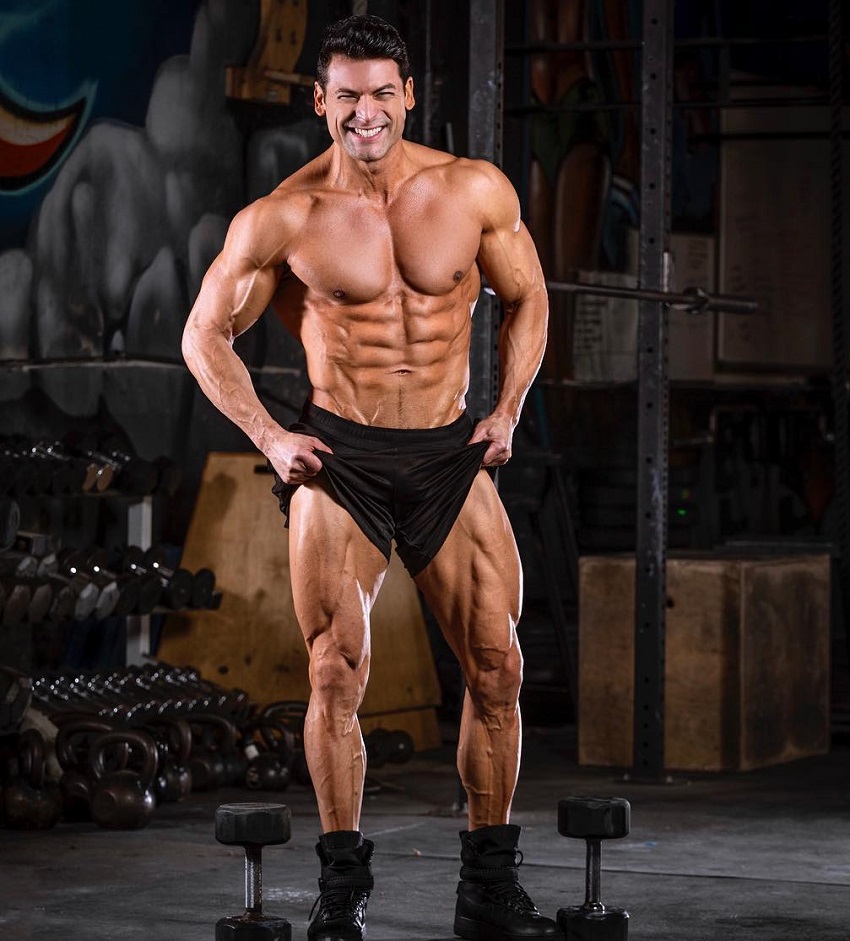 “I challenge you. Dig a little deeper, push a little further, focus more intently, and take your time. “ 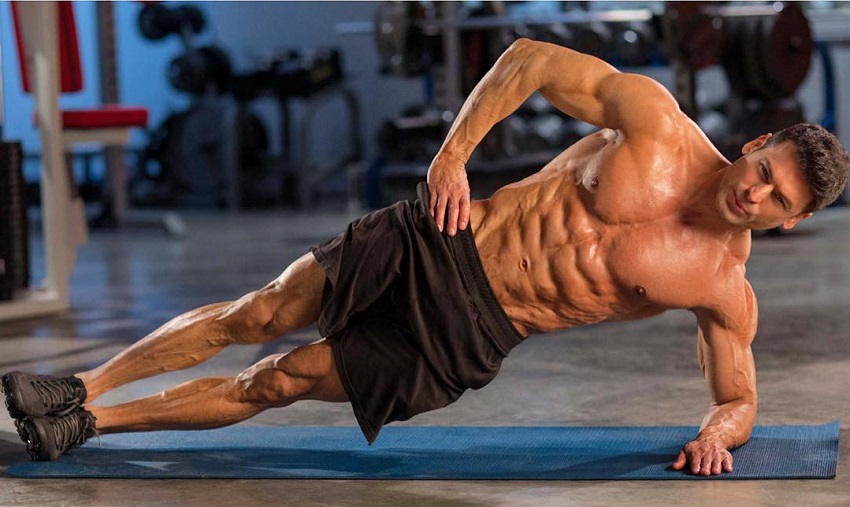 “Here’s to those committed to health, longevity and achieving goals. Keep striving and silence the critics with success. Respect.” 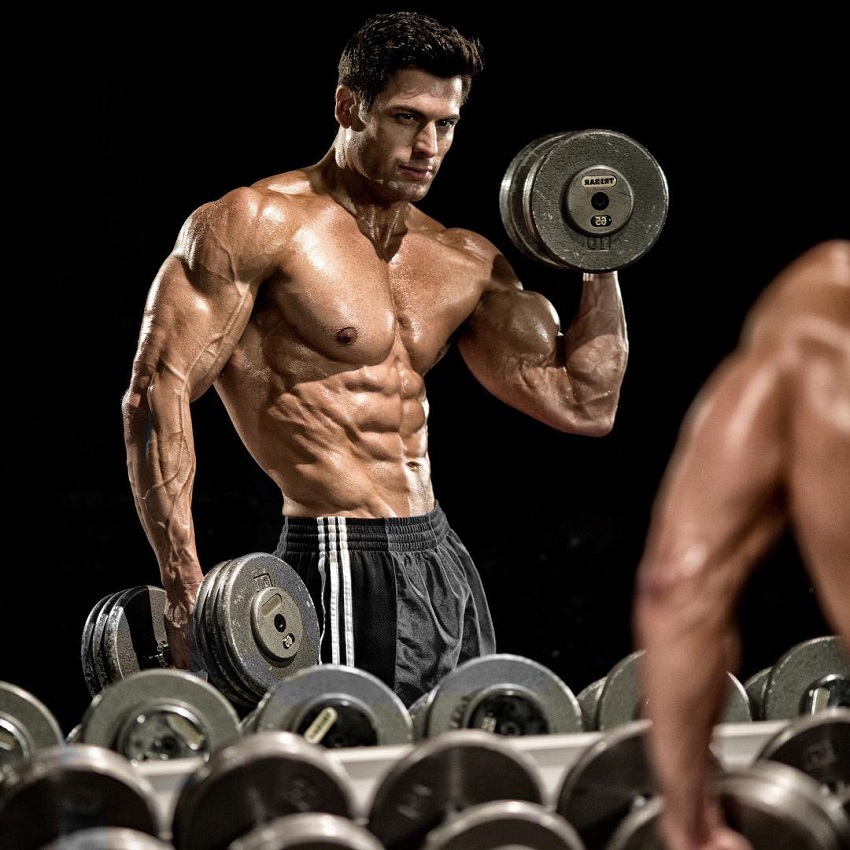 TJ Hoban may be an inspiration for others today, but his life growing up was a totally different story.

TJ says that during high school, he was “a runt with coke bottle glasses, braces, and a bowl hair cut“. Whenever he talked to his peers, he felt embarrassed they would laugh at him for his appearance. He claims:

“I couldn’t even talk to a girl let alone get a date. Actually, I did have a date for homecoming in high school. I was so excited I bought a new outfit, a corsage, and rented a limo, only to have my date call me the night of to tell me she’s going with my best friend instead.”

After hearing that he was going to the high school homecoming alone, TJ was shocked, angry, and disappointed. But as it turned out, this event became a catalyst for his transformation. 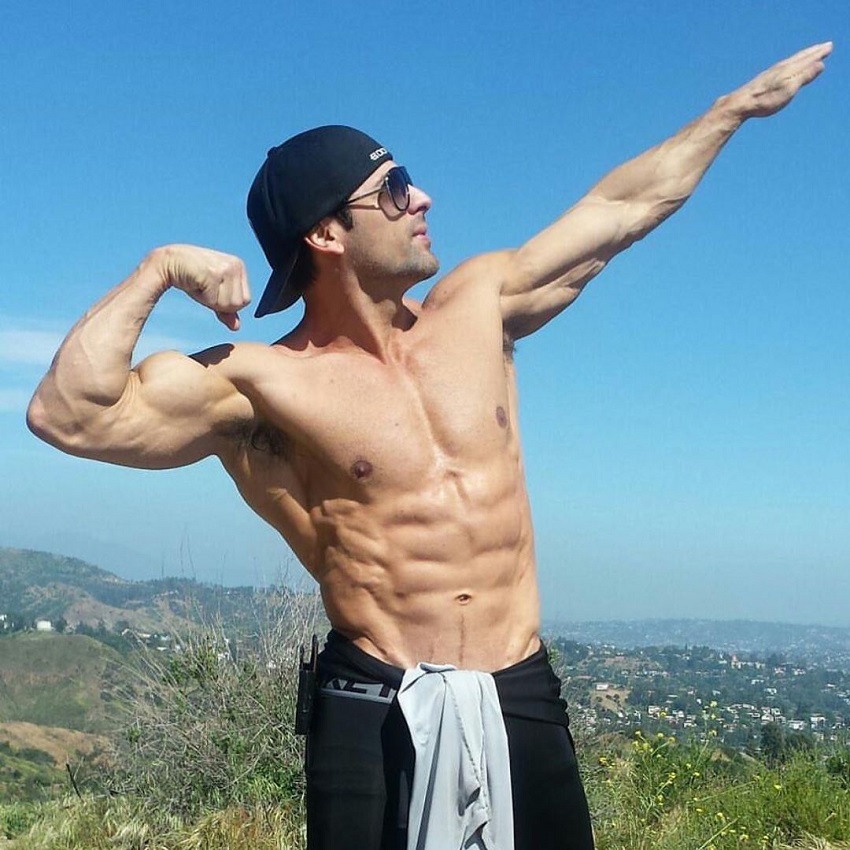 Using the Negativity as Fuel

One day, TJ decided he had enough of “being overlooked”. He decided to use the negative feelings inside of him as his fuel to improve. He asked his mother to buy him a pair of weights to train at home. After she bought the weights, TJ started training rigorously – turning his garage into a gym, joining a local wrestling community, and training “like I was Rocky fighting for my life.”

Training soon became TJ’s release and ground zero. He used the weights to channel any negativity or frustration he experienced in his life. Soon enough, his physique started improving and he became even more addicted to the fitness lifestyle.

“I wasn’t sure if it was because I felt more empowered or that I was so drained I didn’t have the energy to worry anymore. Either way, working out became my therapy and I have used it ever since to cope, reset, and focus on changing my life for the better.”

Surprisingly, TJ’s career as a model began one day when he was spotted on the beach. As chance would have it, people that approached him offered him modeling work. TJ accepted and the rest, as they say, is history.

Ever since landing his first modeling gig, TJ Hoban has become a renowned name in the fitness industry, and inspiration for many others who want to turn their life around – just like he did.

“If you want to pack some mass on your upper chest, try low cable pec flys. Flex and hold 2s at the peak for optimal burn. Keep slayin’ my friends.”

TJ Hoban lifts weights 6 times per week. As a veteran fitness model, he’s familiar with the ins-and-outs of working out. After many years of training, he’s learned what his body responds best to and is now a master of his training. Sculpting his ripped 8-pack was hard but maintaining what he’s achieved is just as difficult. But he enjoys every second of it.

When he needs to dial in for low body fat percentage, TJ will increase his cardio duration and frequency. He also likes to keep things interesting by going outdoors and trying different cardio workouts. Other times, when he’s busy, he’ll train on the treadmill. 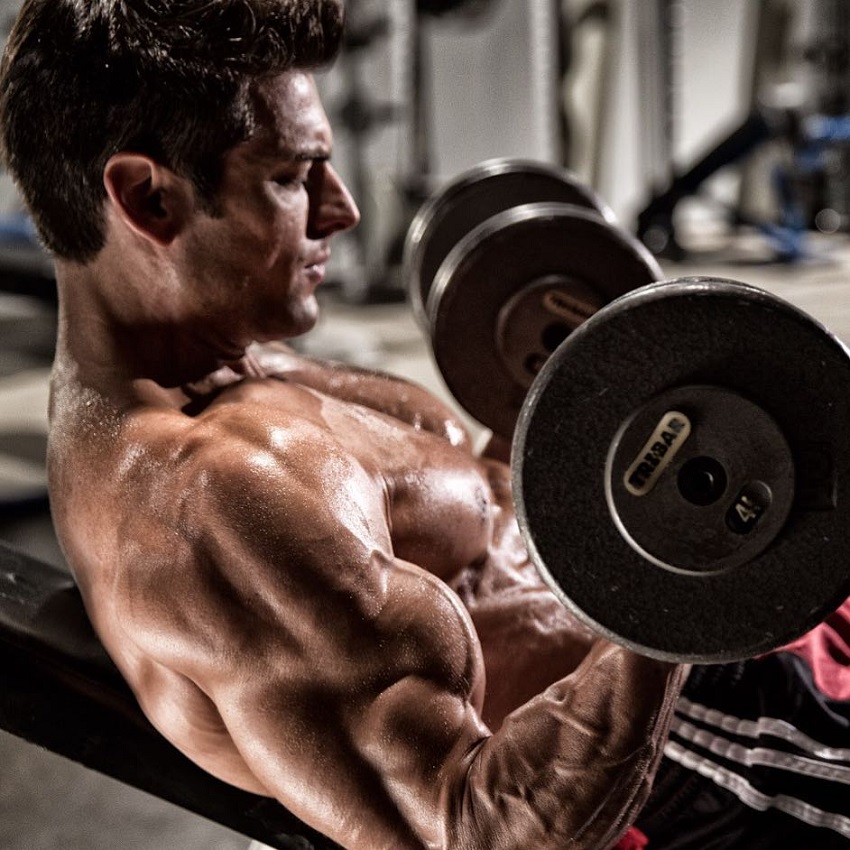 In terms of weights, it similar to cardio in regards to keeping things fresh and interesting. TJ includes pull-ups, squats, and other compound movements for overall physique development. But he also adds isolation exercises to refine specific muscle parts. This allows him to maintain a well-rounded and aesthetic physique.

Back and Biceps Workout

Here’s how a fitness model’s week of training might look for TJ: 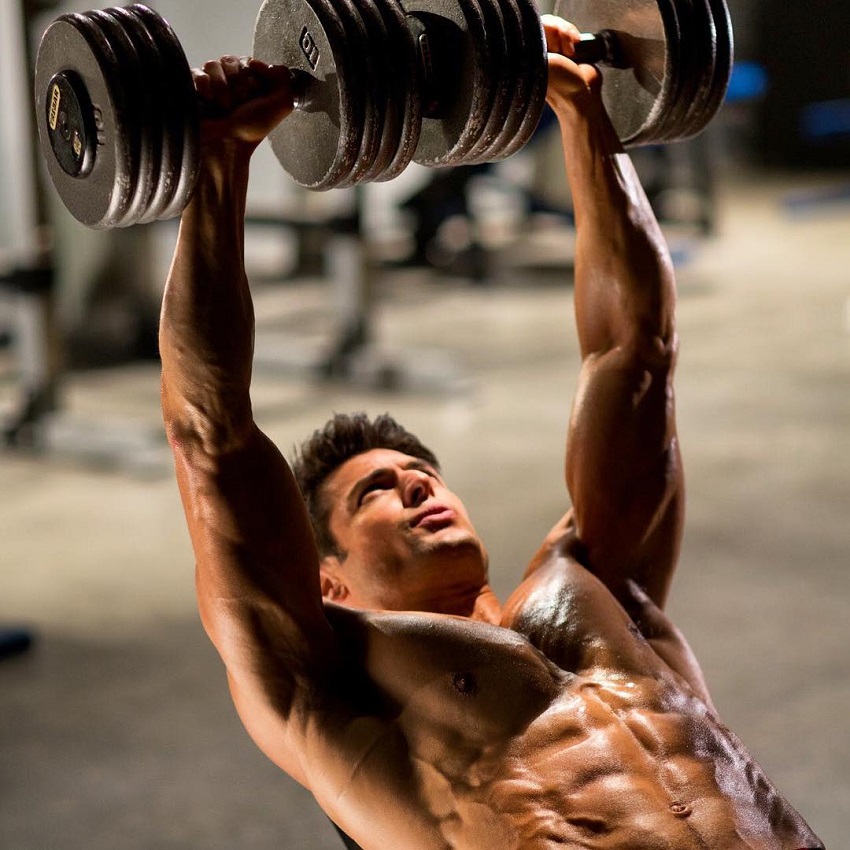 “Building a body is a lot like building a business. It takes time, energy, commitment and consistency. Your success or lack thereof, is the direct result. Effort doesn’t lie, excuses do!”

In TJ Hoban’s experience, diet is even more important than training in terms of staying lean. His food choices include lean chicken breast, brown rice, yams, avocados, nuts and seeds, and egg whites. Although he enjoys cooking his own meals, TJ is an extremely busy person and doesn’t always have the time to do so. In such cases, he opts for a meal prep service.

TJ might go on a so-called bulk during the winter to pack on more muscle. While he’ll naturally gain some body fat along the way too, he’ll try to keep his food choices lean for the most part, emphasizing the protein and high-quality fats.

For beginners it’s much easier to gain lean mass during a bulk, however, TJ has been doing this for a very long time and has reached his genetic potential, which means even a little muscle gained is considered a success.

While TJ Hoban tries to avoid eating too much saturated fat, he doesn’t shy away from it completely. He’ll choose organic and grass fed whenever possible. The reason being, it helps him with natural testosterone production, which in turn, aids in fat burning and muscle retention during a cut. 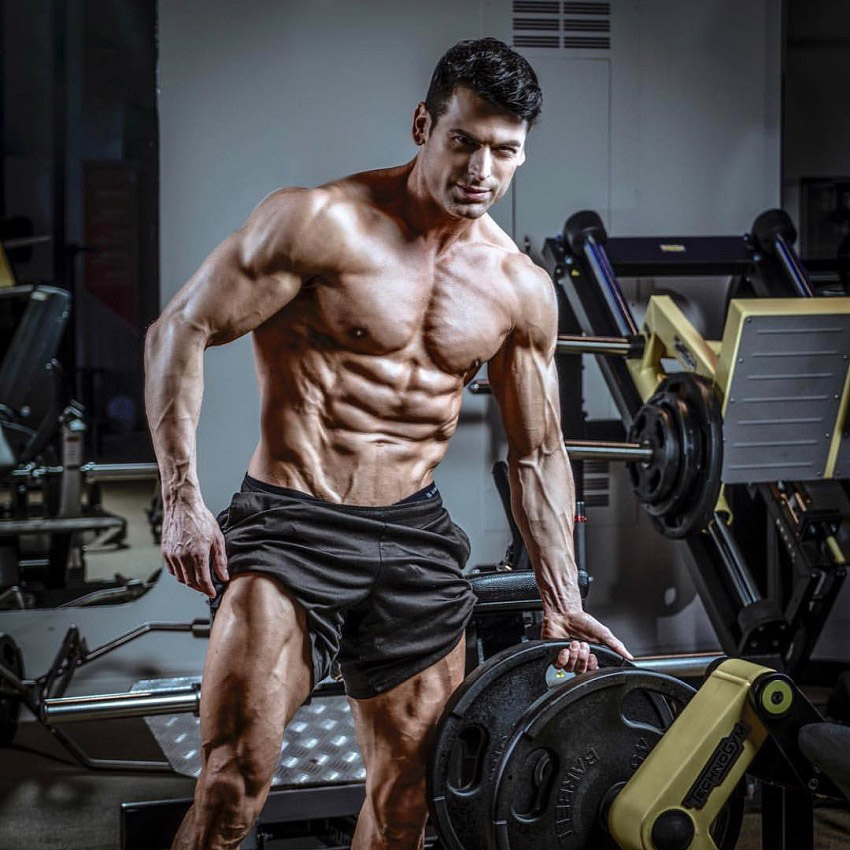 “Refuse the norm, expect more from yourself and never stop improving.”

While TJ has his own idols and influences, ever since starting his journey he’s become an icon in his own right. TJ’s amazing story, his thirst for improvement, and the success he’s achieved so far continue to inspire people the world over. 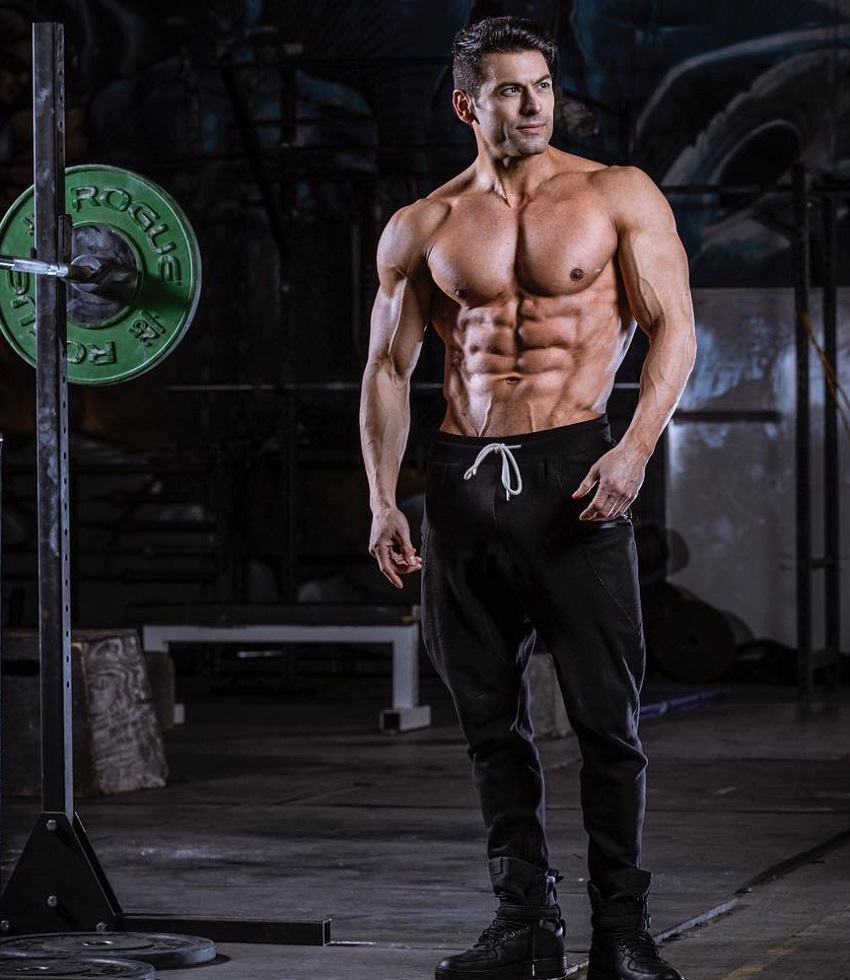 “Put the work in every damn day. No regrets.”

What we can learn from TJ Hoban

What we can learn from TJ Hoban is to never stop improving.

With a WBFF Pro status and over 100 magazine covers, TJ has reached the top of his game. But he continues to find new ways to improve and become even more successful. TJ puts it best when he says, “I didn’t come this far to only come this far.”

With the same attitude, you too can make your goals come true – whatever those might be.