Steve ‘King Snake’ Kuclo, is an IFBB professional bodybuilder and firefighter from Plano, Texas (USA.) He’s made a name for himself through winning professional competitions, and standing on the Mr Olympia stage 4 times.

Growing up, Steve was always extremely passionate about sports and fitness. He played hockey to a high level, and spent a lot of time in the gym during the summer months – aiming to get as strong as possible.

This time in the gym would ultimately spark a bodybuilding passion in Steve. He trained hard and began to compete – seeing great success and winning 3 NPC competitions from 2004- 2011.

In 2011, he won his pro card at the NPC Nationals in Dallas. From this day forward, he was  professional competitor – winning several IFBB competitions and appearing at 4 Mr Olympias between 2013 and 2017. He decided to end his firefighting career and focus on bodybuilding full time – pushing himself to his limits in the gym.

This is Steve’s story: 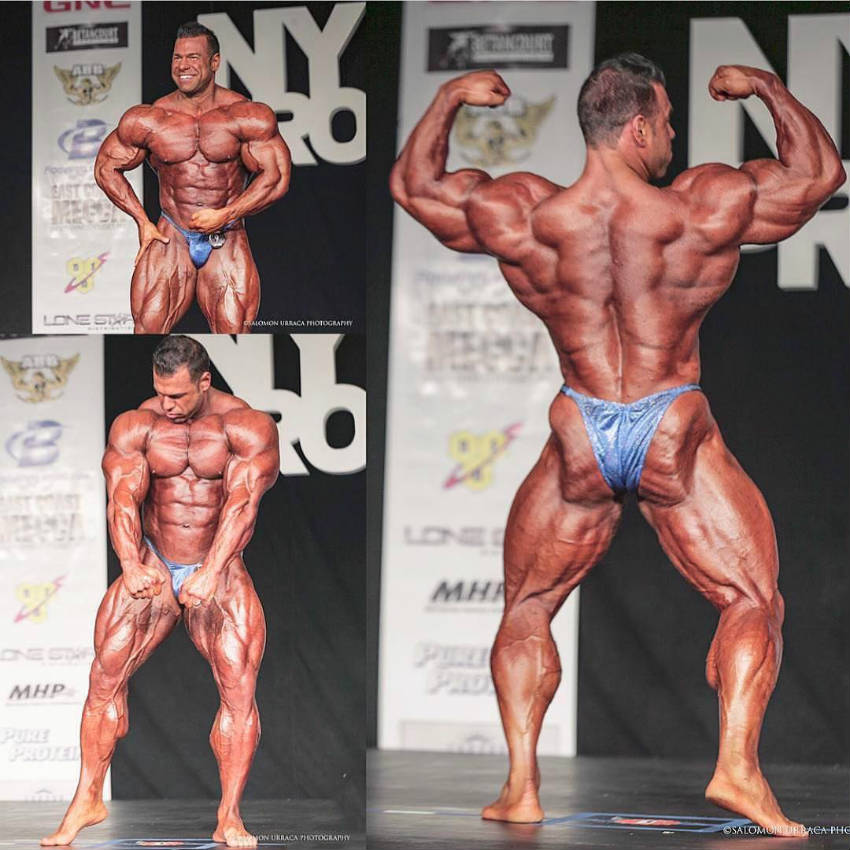 “The guys on the Olympia stage keep getting bigger and bigger and the competition bar needs to be constantly reset.” 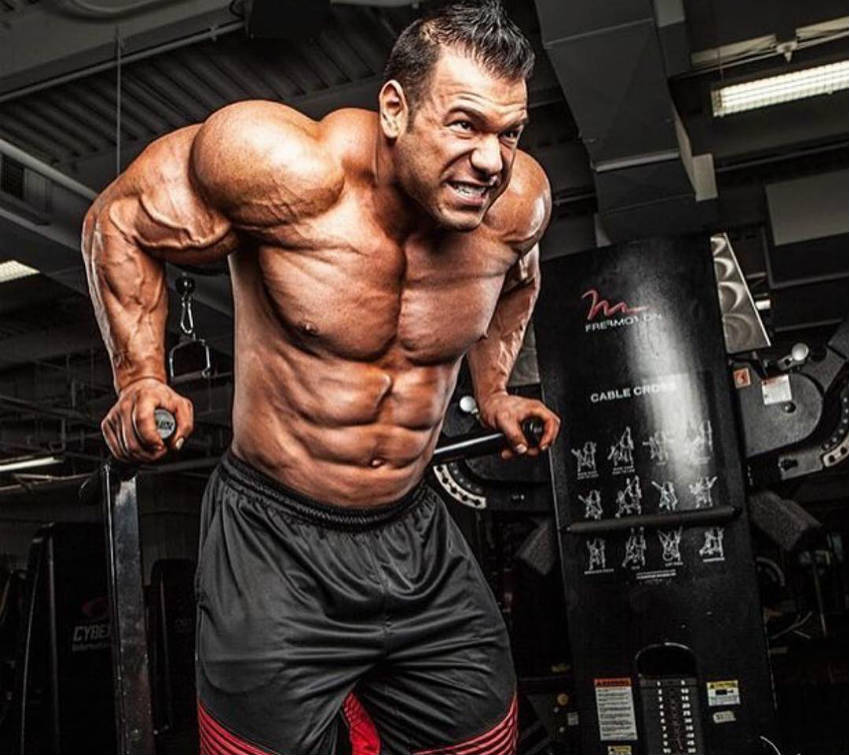 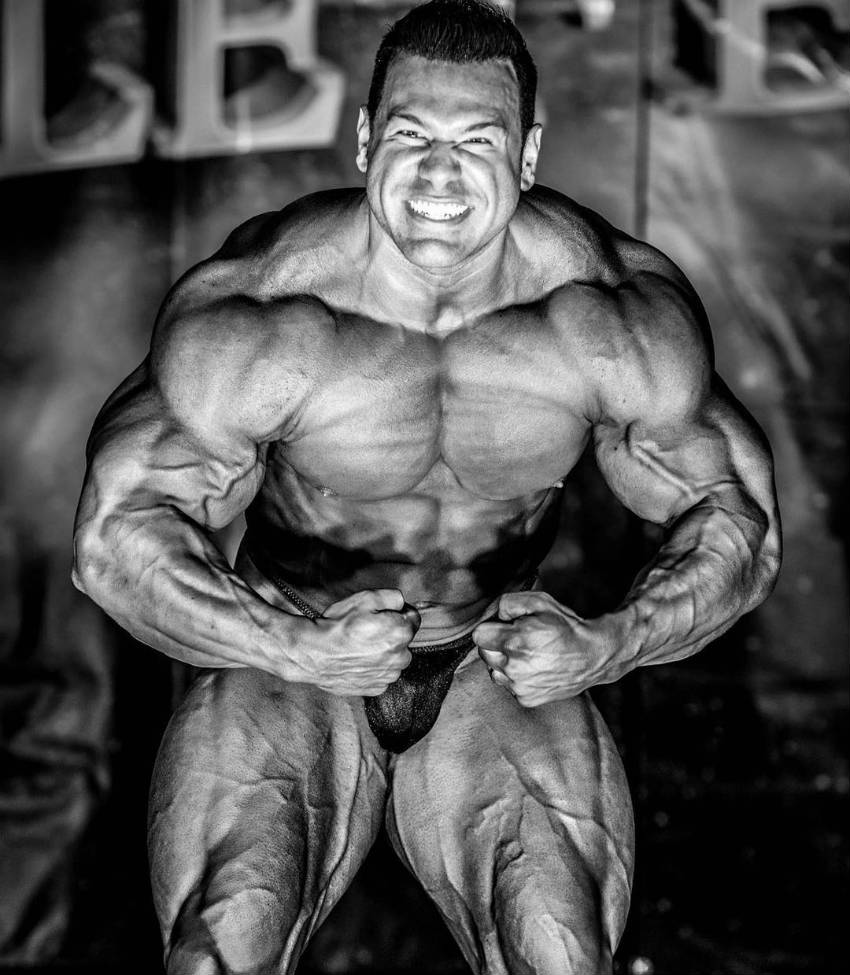 Growing up, Steve was extremely passionate about sports. He played baseball, hockey and football at school – enjoying every minute.

He managed to become so good at Hockey as a young athlete, that he was placed in the hockey hall of fame for his efforts. Steve says that self-improvement was always his mission, and it became an “addiction” as he entered adulthood.

This love for self-improvement in sports, allowed Steve to develop an interest improving his body and becoming as strong a he possibly could. Because of this, he began hitting the gym in order to improve his ability on the hockey rink.

As he spent more and more time in the gym, his love for bodybuilding grew naturally. He decided that he would try out competing to see where the sport would take him.

Steve was only 18 years old when he stepped on stage for the first time.. He managed to win the 2004 NPC ‘Capital City Classic’ teen class, coming 3rd in the overall Men’s open division.

This win made Steve absolutely obsessed with the sport. He would go on to win the Teen Nationals Heavyweight in 2004 and 2005, as well as the 2004 NPC Michigan Bodybuilding State Championships.

While Steve wanted to succeed as a bodybuilder, he also knew that he would need a day job to pay for his food and gym subscription. He joined the fire and rescue service when he was 21, with the intention to help people in his local community.

While he found it hard to juggle long (sometimes 24 hour long) shifts, he believed that this career and his bodybuilding lifestyle complimented each other. The strength gains he made in the gym, were useful in his very physical firefighting role. 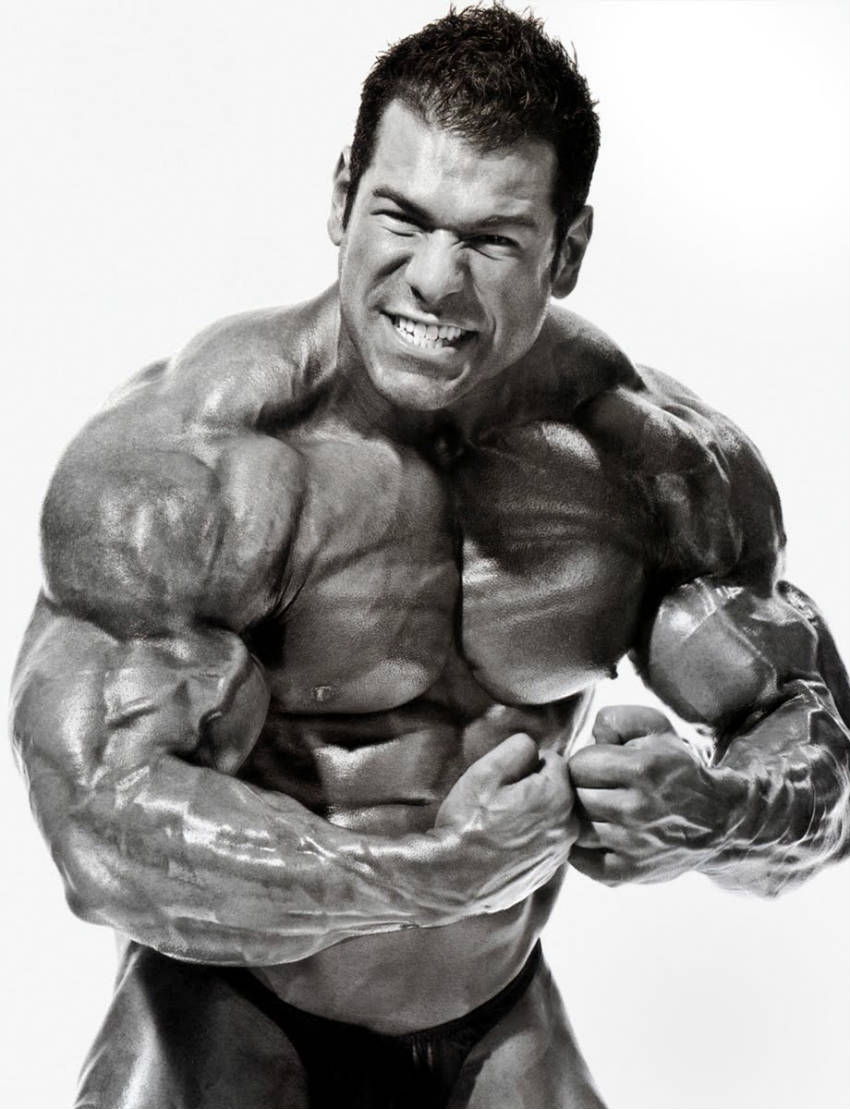 In the late 00’s, Steve began to compete in full adult events, finding success at the 2008 and 2010 NPC Nationals, with 3rd place positions.

In 2011, Steve tried for the third time to win the same competition in Las Vegas, USA. He trained extremely hard for the event, and managed to win easily.

Through doing so, he managed to claim his Pro Card – starting a career which would lead him all the way to the top.

The first professional competition he entered was the 2013 ‘Europa Super Show Men’s Open’ in Dallas. He managed to win this show and carry the first place trophy home.

This wasn’t all he received following this event though. He also found out that he had qualified for the 2013 Mr Olympia. This was a dream that Steve had nurtured since he was a teen, so to be invited onto this stage with the best in the world was an amazing opportunity.

He managed to place at a respectable 14th at the Olympia. His long training period paid off, and he could say that he was officially in the top tier of bodybuilders on earth. He proved his prowess by winning the ‘Arnold Classic’ in Brazil a few months later in 2014.

This victory qualified Steve for another Mr Olympia. He had really found his footing at this stage on the professional competition ladder- seeing the 2015 Mr Olympia as his time to shine.

He managed to pull out a 9th place position this time around, which bagged him a $19000 dollar check. More importantly for him though, this position showed that he was improving.

In 2015, Steve started working with the professional coach George Farah. He says that doing so “completely transformed” his physique.

George’s approach with Steve was to keep things as basic as possible. They worked hard on making small, but noticeable changes to Steve’s diet – introducing new foods and supplements where needed.

He managed to land a 2nd place trophy at the famous ‘Wings of Strength Texas Pro’, but unfortunately came in 16th at his third Mr Olympia a few months later. Steve saw this as an opportunity to rebuild and prepare for the next years contests.

Never Giving Up On The Olympia

Steve had always wanted to win the Olympia, and he attended the 2016 competition with an intention to beat his previous years 16th. He came 13th this time round, which was an improvement, but it was still nowhere near his 2014 9th place result.

Steve knew that it was only a matter of time before he would eventually be on the podium. He viewed these years of training and competing as “self improvement” – the initial motivation which started him out on the bodybuilding path in the first place. 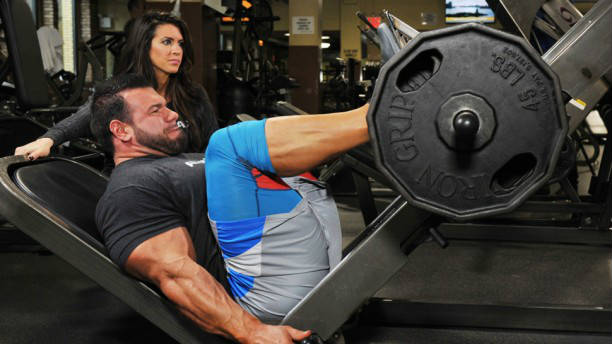 Steve has created a routine based on years of training and working with the best in the business. His three main goals are:

Steves says “taking your body to new limits is not an easy or comfortable process.” His weekly split is a grueling 6 day marathon, with each day focused on a different area of the body. 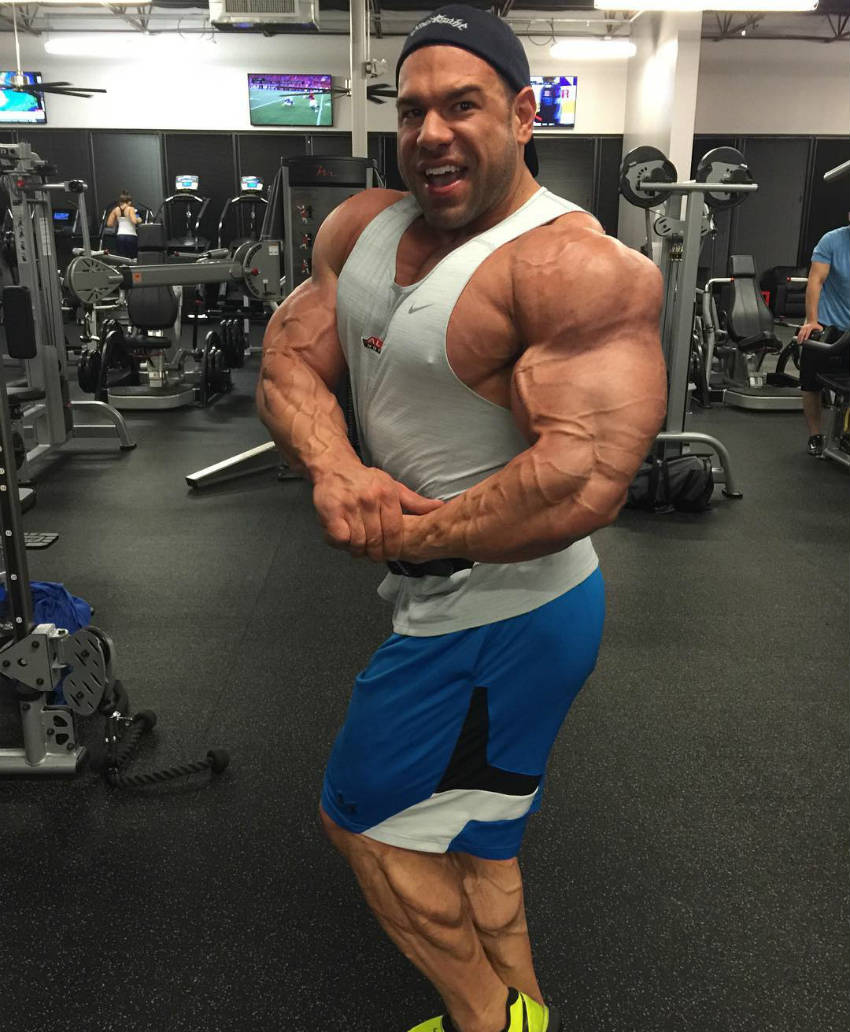 Power partial and Triple Drop Set on the 3rd set

Power Partial and Triple Drop Set on the 3rd set

“I have spent over 12 years learning about the human body and how it reacts to different stimulus. I have worked with some of the best trainers, prep coaches, and training partners in the world and have gained priceless knowledge from them… you quickly learn that every body is different and responds differently to different methods.” 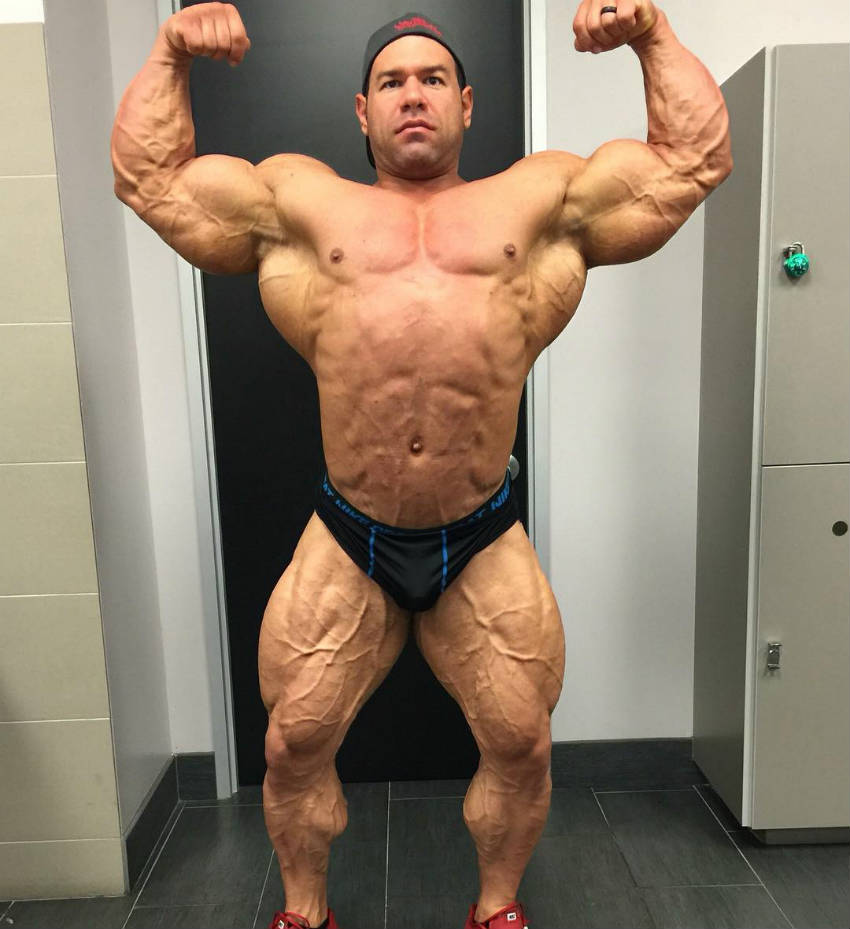 In the off-season, Steve aims to increase his body-weight and mass by increasing his caloric intake. He expects to have some excess body fat by the end of the process, but isn’t too worried by this.

To increase body-weight/mass by increasing calories above normal/maintenance level to aide in gaining muscle. We will focus on minimizing body fat gain but don’t be alarmed if you do add some body fat.

A typical days meal plan for his off-season is below:

While Steve chooses to include 3 cheat meals a week during the off-season, in the competition season he looses them completely.

His competition diet is purely based around lean protein sources and supplements. He aims to loose excess body fat as well, so eats healthy carbs which allow him to complete better cardio sessions.

“When it comes to achieving bodybuilding excellence, there is no doubting supplementation’s role in boosting workout performance and providing the raw materials needed to translate training intensity into solid muscle gains.”

For Steve, nutritional supplementation is a vital part of his plan. He ended his firefighting career at the end of 2015 to focus on bodybuilding, but prior to this he was working out after 24 hour shifts.

To do this, Steve would use pre-workout drinks. These drinks have gradually become a big part of his routine, and he uses them regularly. 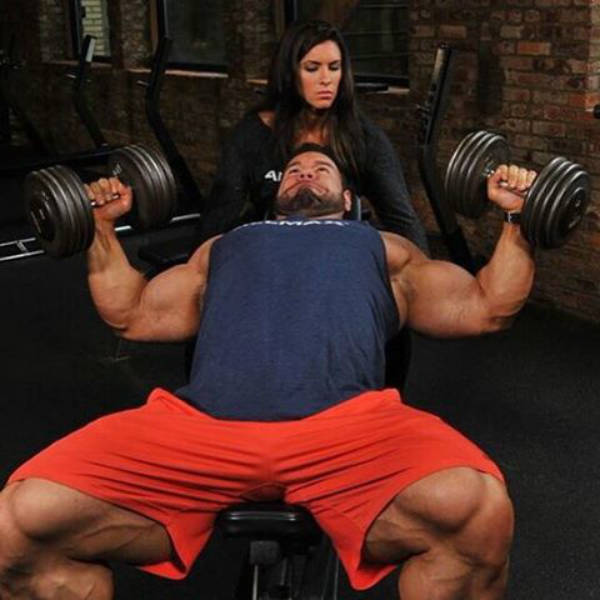 Steve being spotted by his wife, Amanda

One of Steve’s main influences in his life, is his wife Amanda Kuclo. She is an IFBB Bikini Pro, and lives a very similar life to Steve.

They help each other with all aspects of their fitness lives. They eat together and have a child together who they hope with follow a similar healthy path. 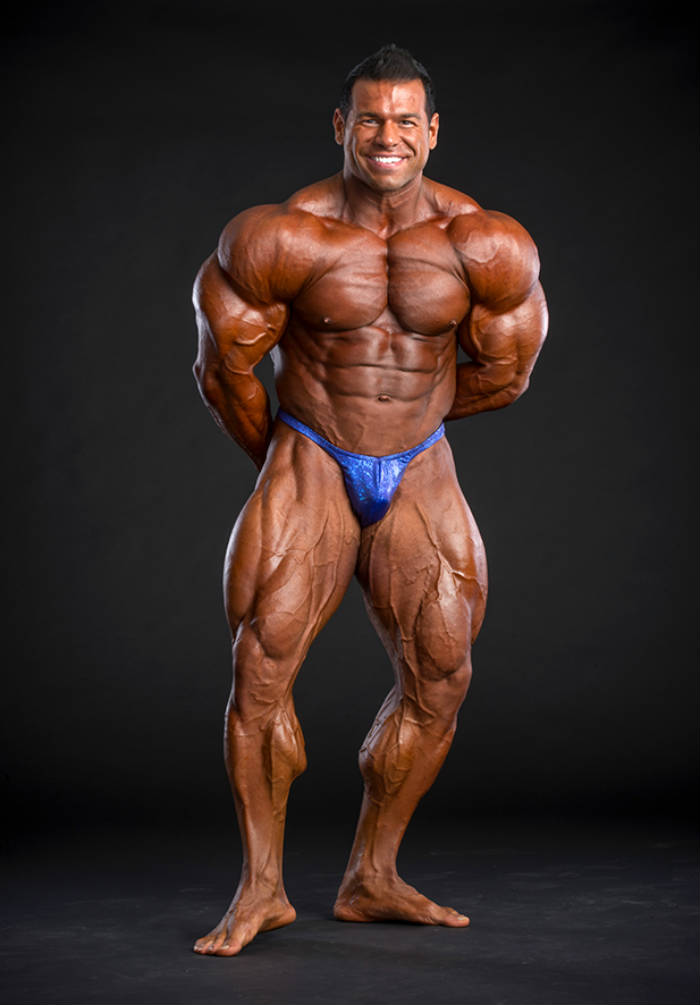 What we can learn from Steve Kuclo

Steve’s entire bodybuilding journey started from a simple idea; self improvement. He was an excellent hockey player as a boy, but he was bitten by the ‘gym bug’ when he first started lifting weights. He managed to build an extremely successful career from this passion – always focusing on the idea of gradual improvements.

In your fitness journey, it may be useful to focus on your own day-to-day improvement, rather than the end goal alone.