Ryan Tremaine Klarenbach is a well-known calisthenics expert who combines bodyweight training with weightlifting. His ‘hybrid’ approach to bodybuilding has made him popular among fitness and calisthenics enthusiasts across America.

Ryan first got into fitness as a teenager, after taking an interest in sports and working out. Throughout the years, his passion grew even further to become more muscular, and both flexible at the same time. To achieve his goal, Ryan gradually transitioned into calisthenics; focusing mostly on body-weight training.

With a different approach to training, and fitness, Ryan built a name for himself within a short space of time. Today, he boasts an ever-increasing number of online followers who are inspired by his example. 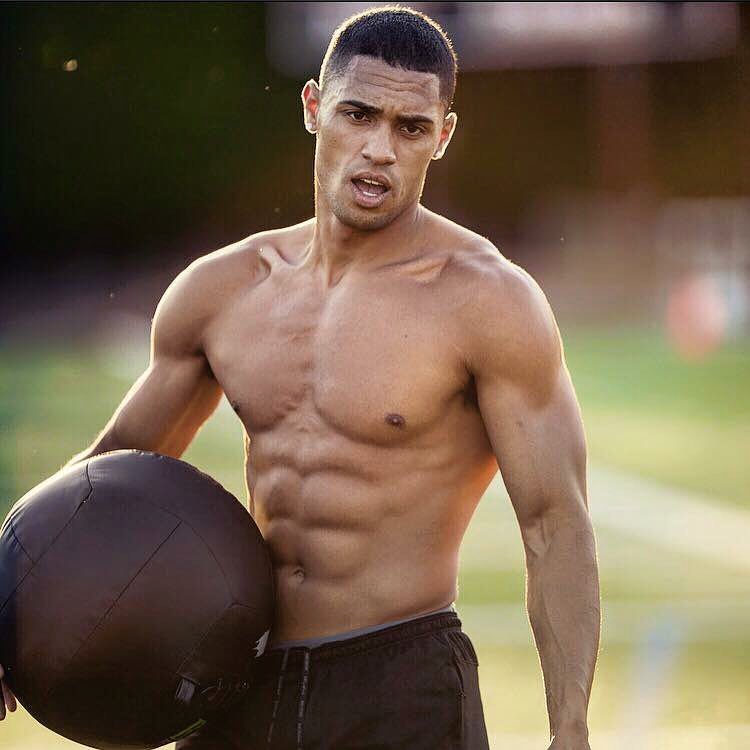 “Push yourself! What’s going to separate you from others is the amount of times you are able to get up and try again after failing.” 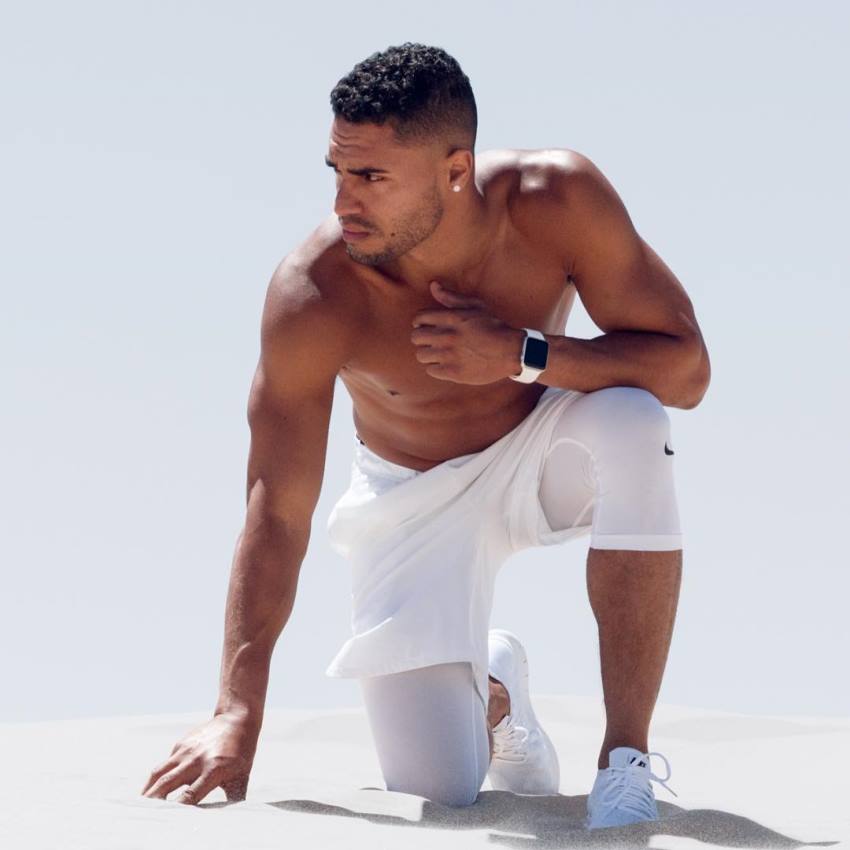 “Fallen in love with the body and what we can push our bodies to do! Movement has easily become my favorite thing to work outside the gym! Not only that but it’s a blast!” 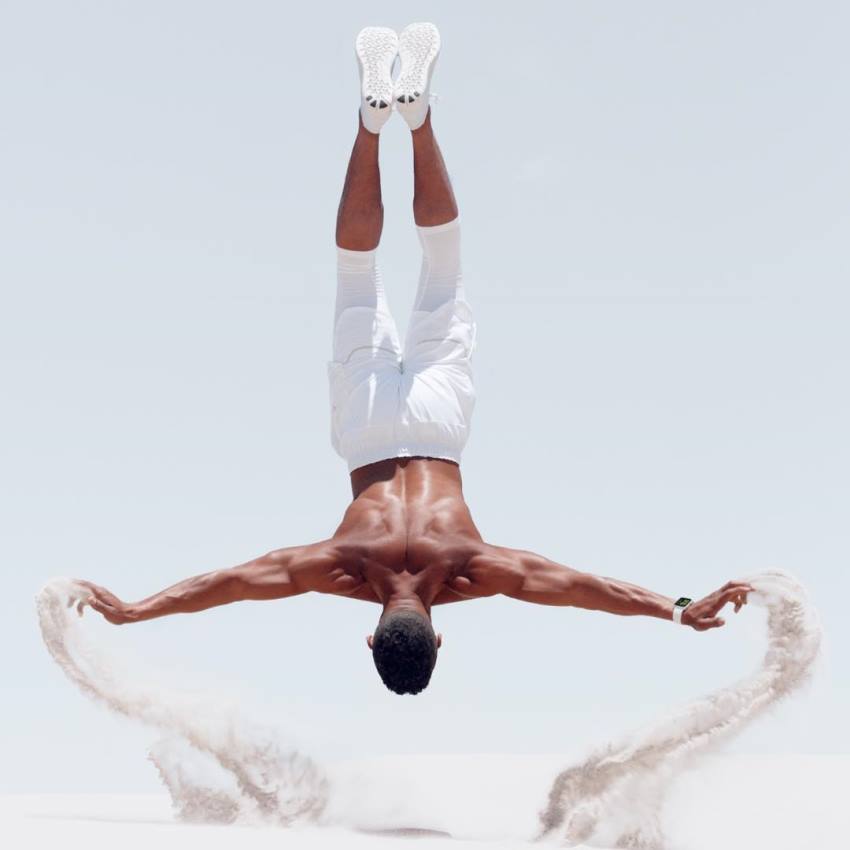 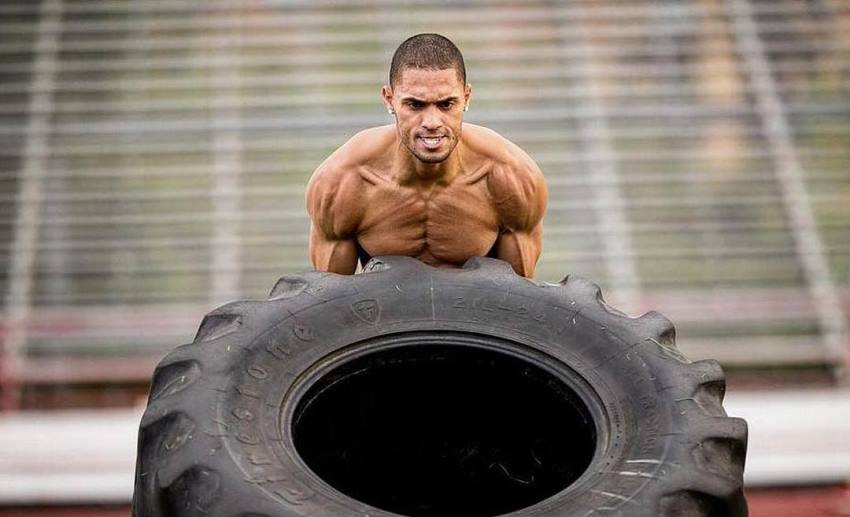 “Be persistent and relentless in everything that you do in life! If you fail (which you will ) Shake it off and try again! Don’t get discouraged by failed attempts, embrace them. They are not the opposite of success, but part of the process to achieving it!”

All the equipment Ryan uses for this workout are a medicine ball, bench, and a bar. He’ll use this equipment to work his entire body, giving special attention to his abs and core. This workout also focuses on Ryan’s fast-twitch muscle fibers, which are responsible for his explosiveness.

Some of the exercises Ryan does in this workout aren’t intended for beginners in calisthenics. It took Ryan years of training to perfect these movements.

As for the duration of the workout, it can last anywhere between 30-60 minutes. Ryan usually does it twice per week to maintain his speed, and agility.

Here’s an overview of the workout; 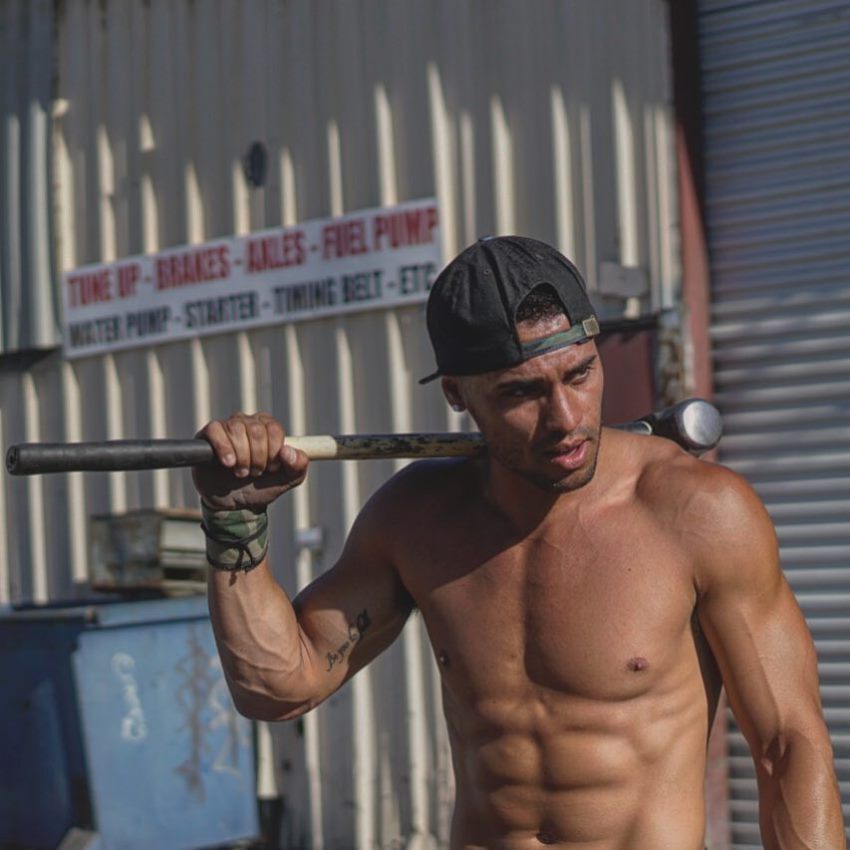 To begin the exercise, Ryan gets in a push-up position between two heavy, stable benches. He’ll then explode up onto the benches, before returning back down to his starting position.

While this may look like an upper-body exercise, it’s in fact, a full-body movement. Ryan has to use his arms, core, legs, and even feet to achieve balance and correct form when doing this exercise.

Ryan advises going rep by rep, as the movement can be fairly challenging for a beginner. He also suggests that if this exercise seems too difficult, there are other variations of push-ups. Such as superman push-ups or clapping push-ups.

Ryan starts this exercise from his knees, and then uses his arms for momentum to explode up onto his feet; getting into a standing position.

“You’re definitely going to feel this in your legs, but your lungs and heart are going to be seriously involved as well. Take your time in between sets, because you’re going to be pretty winded doing this.” 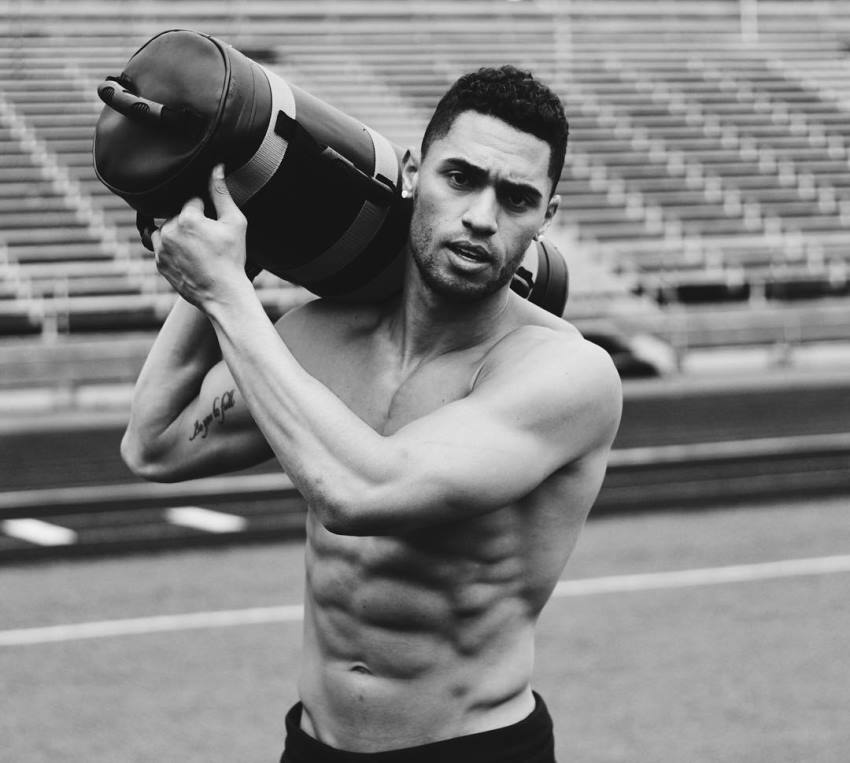 This exercise incorporates all of the muscles in Ryan’s upper body. Including his lower back, lats, traps, arms, shoulders, and core.

When doing the exercise, Ryan tries to keep each rep controlled and slow, making sure to keep his core neutral throughout the movement.

This is a unique variation of a lunge which focuses on explosiveness. Ryan starts the exercise in a regular lunge position with his back knee off the ground. After exploding up, he brings his back leg up high, and then all the way back again.

Basically, each rep Ryan does starts and ends in the exact same position. If the movement pattern seems too complicated, Ryan suggests thinking of making a scissor movement when jumping in the air – this should make it simpler.

Last advice Ryan gave to everyone is to focus on keeping the back straight and controlled on each landing.

Having his feet elevated throughout the movement makes this exercise extremely challenging for Ryan. As he says; “You may be able to knock out 20 reps or more with your feet on the floor, but don’t be surprised if 12 reps is a serious challenge here.”

In order to perform the exercise correctly, Ryan keeps his back straight the entire time. He also gets his chest as close as he can to the bar. Doing this puts a lot of stress on Ryan’s core, as it works to keep his body flat while rowing.

Once again, Ryan elevates his feet to make this exercise much harder than a regular push-up on the floor. To add even more challenge, Ryan puts one foot on top of the other, and keeps his hands on a medicine ball.

His body will naturally want to swing on the ball, but he’ll make sure to maximally use his core to stabilize it.

Ab Finisher consists of several exercises which are done non-stop for a total of 60 reps. These exercises hit Ryan’s entire core, including abs, obliques, and even a bit of his lower back.

Here’s Ryan giving advice for Ab Finisher; “Keep it strict! This may not look like a lot of work on paper, but take my word for it: Once you’ve got the form down on the explosive exercises, they take enough out of you that this can be plenty!” – Ryan Tremaine Klarenbach 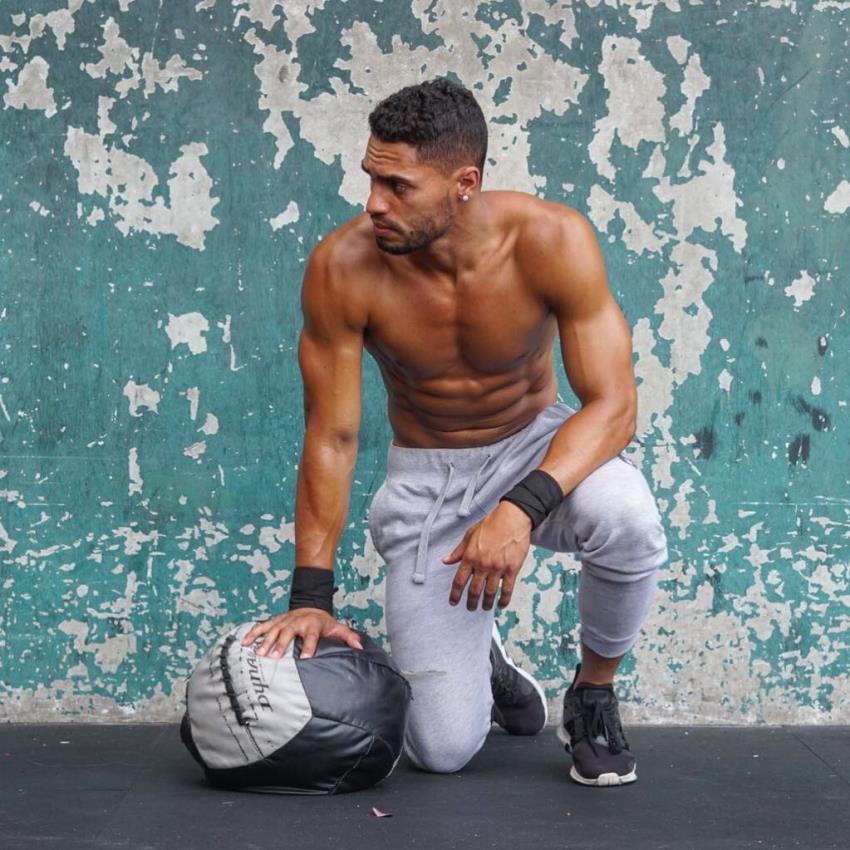 To improve his flexibility and speed in his explosive workouts even more. Ryan will do 15-30 minutes of stretching a few times per week.

He’ll usually do it right after the workout, just because it helps destroy the lactic acid that built up in his muscles. 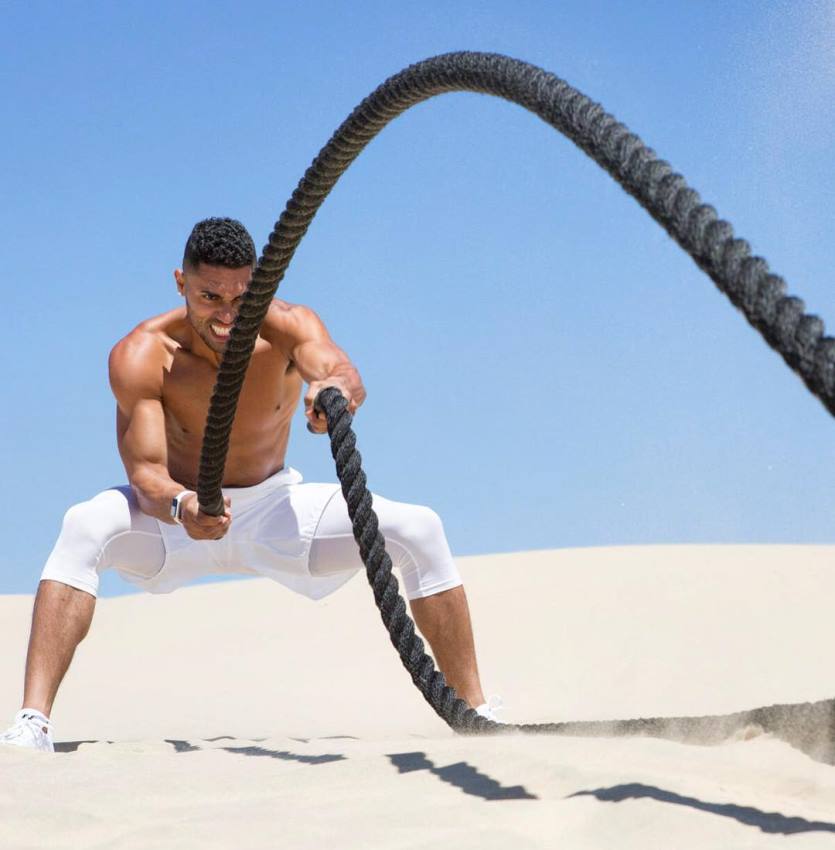 Due to his challenging workouts, Ryan doesn’t restrict himself too much with his diet. He’ll mostly eat foods that are healthy and non-processed, but he’ll also give himself the freedom to indulge in a high-calorie treat every now and then.

An example of a cheat meal for Ryan would be a chocolate cake, burger with cheese, or a spicy pizza.

In most cases, Ryan doesn’t take any supplements. He believes that he can meet all of his nutrient requirements from eating healthy, whole foods.

The only supplement Ryan might occasionally take is a pre-workout with natural ingredients to help boost his focus and energy in the gym. 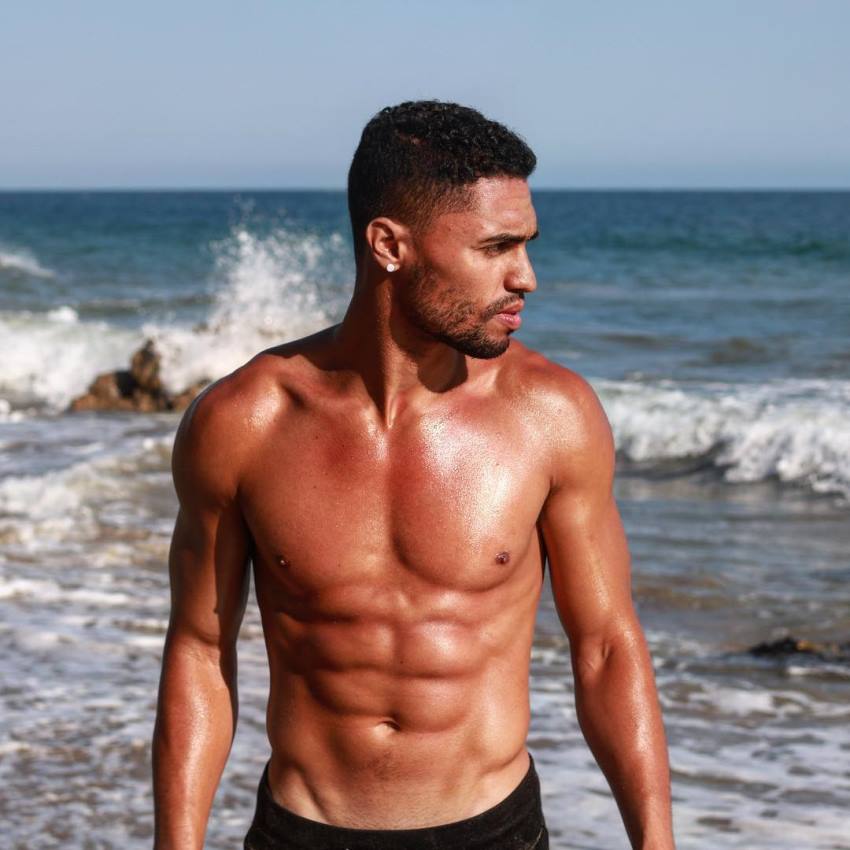 “What we want can seem far away or unattainable at times, but the harder you work the smaller that gap gets between you and your goals. Don’t settle and never forget why you started.”

What we can learn from Ryan Tremaine Klarenbach

Ryan Tremaine Klarenbach has taught us that you don’t need to follow ‘all the rules’ in order to be successful.

Instead of going the standard fitness route of weightlifting to build an amazing body. Ryan decided to put his own twist to it, combining calisthenics and functional weight training with lifting weights.

What this tells us, is that you can achieve success in many different ways. There isn’t a set route for reaching your goals. Experiment with different things, and see what works best for you. That’s one of the ways you can build an amazing life for yourself – just like Ryan Tremaine Klarenbach.

Here’s Ryan’s inspirational message for anyone who struggles to stay consistent, or motivated;

“Commitment means staying loyal to what you said you are going to do long after the mood you said it in has left you. Stay driven and remember why you started.” –  Ryan Tremaine Klarenbach