Of Italian Decent, Rob Deluca is a Canadian bodybuilder who competes in the IDFA (International Drug-Free Athletics). He’s also an entrepreneur, owning a roofing contracting firm.

Rob was born and raised in Hamilton, Ontario. He first took on weight training at 11 years old; training with a basic set of dumbbells at home. Having experienced fast initial “gains”, it didn’t take him long to outgrow these small weights. As a result, he joined a gym, where he could train with better equipment.

During his prime, Rob used to manipulate his weight a lot. There were times where he weighed an incredible 272 lbs, and also times where he was 186 lbs of “shredded muscle.” 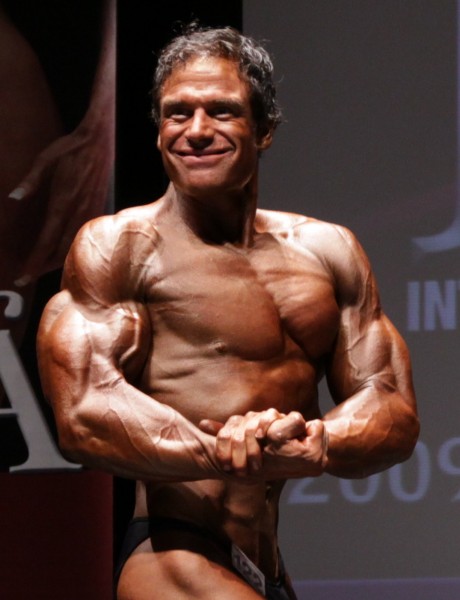 “I absolutely love weight training and body building, and have since the age of 11.” 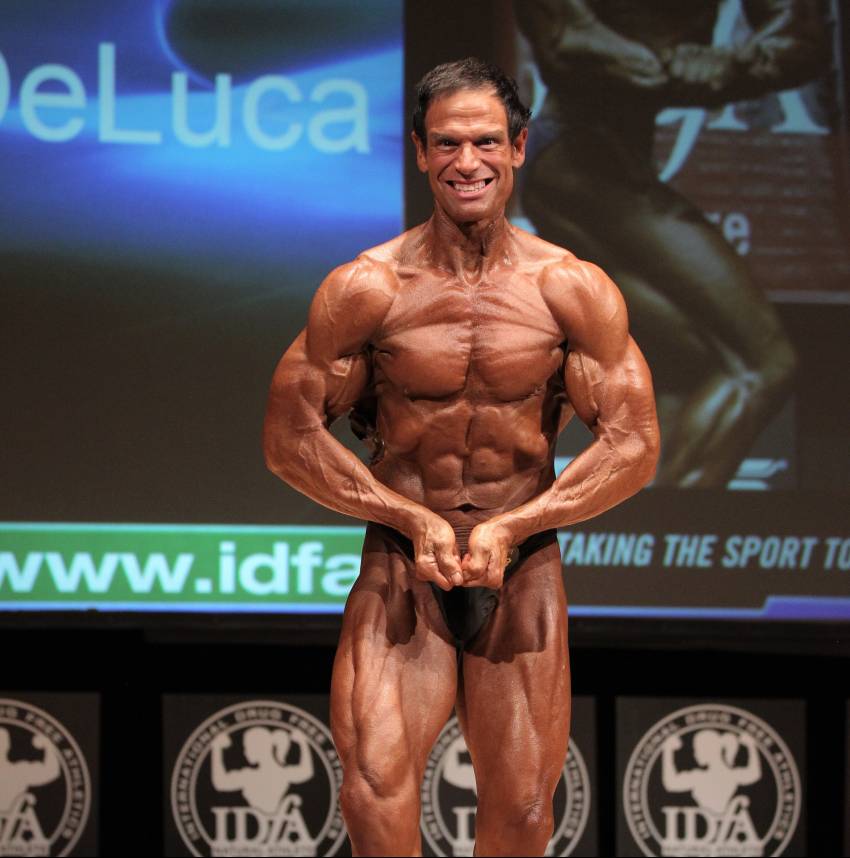 Rob Deluca wasn’t always the prime example of a strong and muscular physique. When he was 10 years old, Rob was mocked for having “extremely long arms.”

According to Rob, one person would continually tease him with remarks such as “do your knuckles have any skin left on them?”.

However, this mocking gave Rob the impetus to start training with weights. Through hard work in the gym and countless hours researching nutrition, he was able to transform his body from the ground-up.

Not only did he prove his doubters wrong, but Rob eventually went on to become a successful bodybuilder in Canada – winning the IDFA 2008 Canadian Classic as a heavyweight. 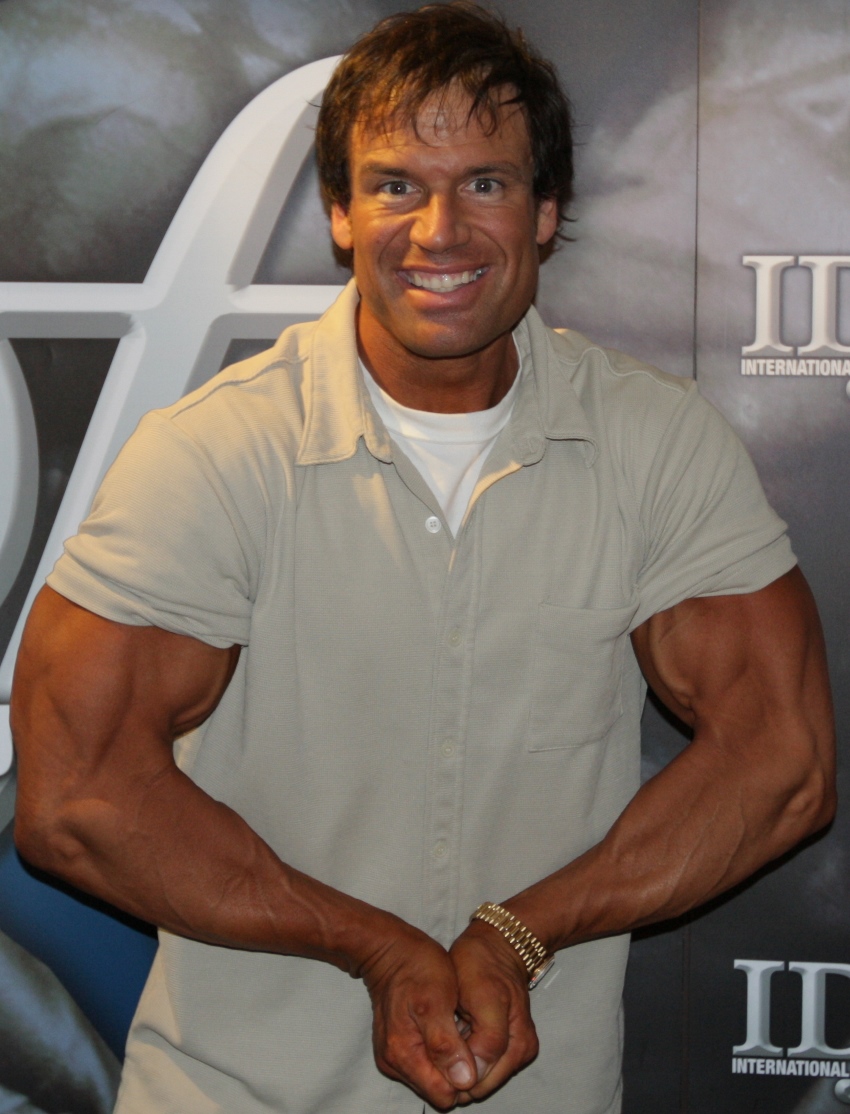 “Over the years, I have come to conclude that the best way to ensure a steady rate of growth and improvement is to stay healthy and retain your ability to train with maximal intensity! Consistency over time is one of the keys to achieving the full expression of one’s genetic potential.”

When Rob does cardio, he prefers it to be HIIT. This includes doing short but intense bursts of physical activity such as sprints or bike cycling. He keeps his RPM over 120 for about 30 seconds, then slows down to a much slower pace for another 30 seconds, before increasing the intensity again. He’ll repeat this process for 5-10 minutes straight.

As for his strength workouts, Rob might use a lot of volume. This includes doing supersets and drop sets to keep the intensity high and workout duration short. This kind of training is great for maximum muscle growth and aesthetics. However, adapting to this kind of training takes months of gradual progress.

As the triceps muscle makes up around 60 percent of upper arm mass, Rob strongly believes that this is the best muscle to train for increasing overall arm size. He has found that the best way to induce triceps growth is by incorporating strength periods alongside regular hypertrophy programs.

In practice, it looks like this – if Rob trains triceps four times per month, he’ll have at least one training session where he does only low reps, heavy weights, and compound movements. This may not give him the most optimal muscle hypertrophy, but it increases his strength – which in turn allows him to achieve greater working loads, which induces better muscle tissue breakdown.

“You could have one training session during which you focus on strength work, and then the next could be geared toward increased blood flow and achieving a burning pump.”

Another factor Rob believes is crucial for building a big triceps is working on all three heads – long, medial, lateral. He says that a lot of people make a mistake of training only one of these heads, while the other two are usually neglected. By using the full range of motion, as well as incorporating a variety of exercises, Rob is able to hit his triceps from all angles. Some of these exercises are skullcruchers, close grip bench press, cable pushdowns, and dips.

In this phase, Rob simply increases the number of repetitions of each exercise he would perform in the strength phase. The number of reps usually goes from 15,12, 10, to 8.

To maintain a lean physique, Rob will eat lean proteins, healthy fats, and some good carbs. Athletes like Rob often have a cutting and bulking phase.

The cutting phase is when he drops his calories down in order to lean down for a contest.

However, once the competition is over, he goes on the so-called ‘bulk’ where he’ll up his calories to increase muscle size and strength.

While Rob eats clean throughout his cutting season, he’ll allow for a cheat meal or two per week when he’s bulking. As his muscles need more calories during this ‘building’ phase, he has more leeway in terms of his food choice. As Rob is of Italian descent, he might sometimes enjoy a Margherita pizza or some bolognese pasta.

However, the closer he gets to the competition, the less frequent his ‘cheat meals’ will get. As he reaches the point where he needs to cut off those last 5 or 10 pounds, he’ll cut them out altogether.

To carry on from the previous point, Rob might sometimes prepare his meals for the week, just so he avoids temptations to fall of track.

Sometimes when the sugar cravings arise, he may make a healthy version of the unhealthy meal he wants to eat. For example, if he’s craving ice cream, he’ll make a low-calorie version with no sugar, using stevia or another natural sweetener.

In terms of supplements, it’s a mix of vitamins, fish oil, and a good quality protein. Bodybuilders like Rob tend to stick to the good old fashioned whey protein. However, even a plant-based protein powder will do.

When he’s close to a contest, he might add a fat burner or a pre workout to his stack. Just to make his preparations a bit easier and smoother. A good fat burner can help curb hunger and help him feel less moody and lethargic.

“My belief for Triceps development, as it is for most other muscle groups, is that, in order to achieve maximal muscle hypertrophy, (growth), a training program should include periods that are intended to increase strength; strength which would in turn allow for the us of greater working loads and greater degrees of tissue breakdown.”

What we can learn from Rob Deluca

Rob has trained in the gym for over four decades – he knows from his own experience that results don’t come fast. No matter the training program, or even diet, Rob says that if he wasn’t consistent, he would never have built his trophy-winning physique.

His advice to everyone is to push through those difficult days, even when it feels like “nothing is going right.” It’s on those days when you are presented with the opportunity to beat your “weaker-self”; and with that, you’re one step closer to greatness.