From a small town called Kendall, England, Lewis and Owen Harrison are twins with a unique story.

Playing for the same soccer teams throughout their younger years, both Owen and Lewis have always had a healthy dose of rivalry between them. The twins’ competitiveness made them chase bigger opportunities, and one of them was fitness. It was after finishing school that Lewis devoted himself to personal training, while Owen joined the Royal Marines, which is one of the best fighting forces in the world.

After 4 years of service, Owen left the marines and became a personal trainer, just like his brother Lewis. From that point on, the Harrison Twins moved into fitness modeling and started doing photo shoots together. They were soon recognized by the top people in the industry – it was at that point their fame “skyrocketed”.

Ever since joining the fitness industry, the twins built their own brand Harrison Twins. They’ve been featured in national newspapers, magazines, and fitness websites, and have inspired masses to join “the fitness revolution”. 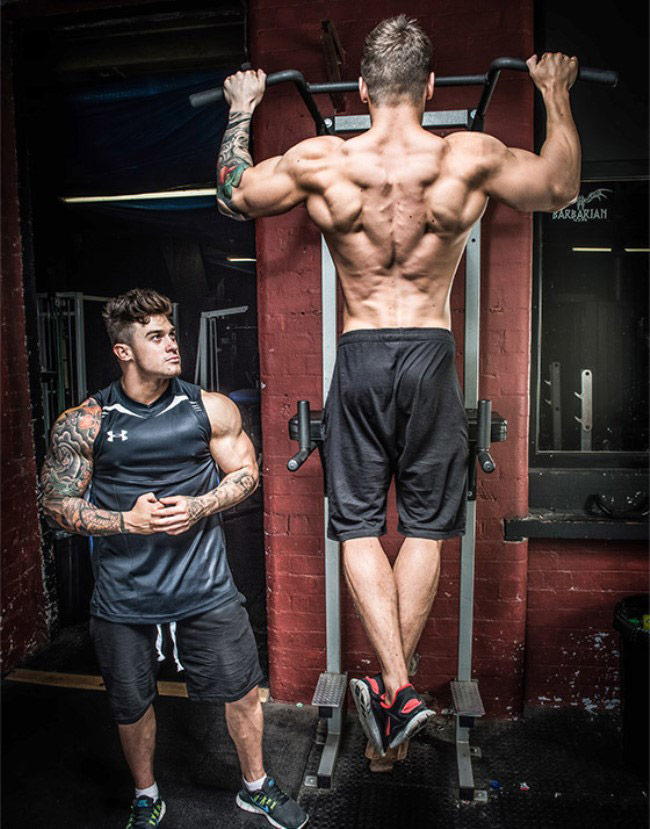 “You don’t have to be great to start, but you have to start to be great.” – Lewis Harrison 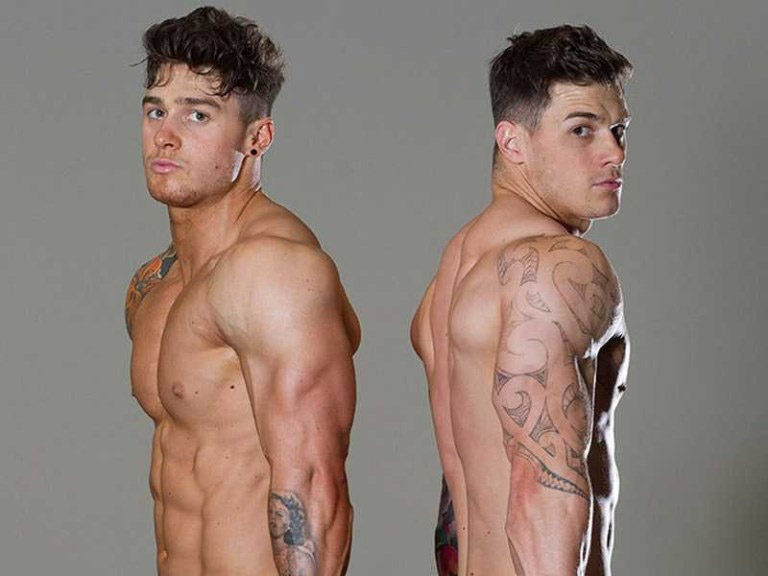 “The greatest fear in the world is of the opinions of others. At the moment you are unafraid of the crowd you are no longer a sheep, you become a lion.” – Owen Harrison

The Harrison twins are renowned personal trainers, international fitness models, and ambassadors of a supplement company.

They run various fitness programs and boot camps throughout the UK and Europe, expanding their knowledge to their followers, and helping them achieve their transformation goals. 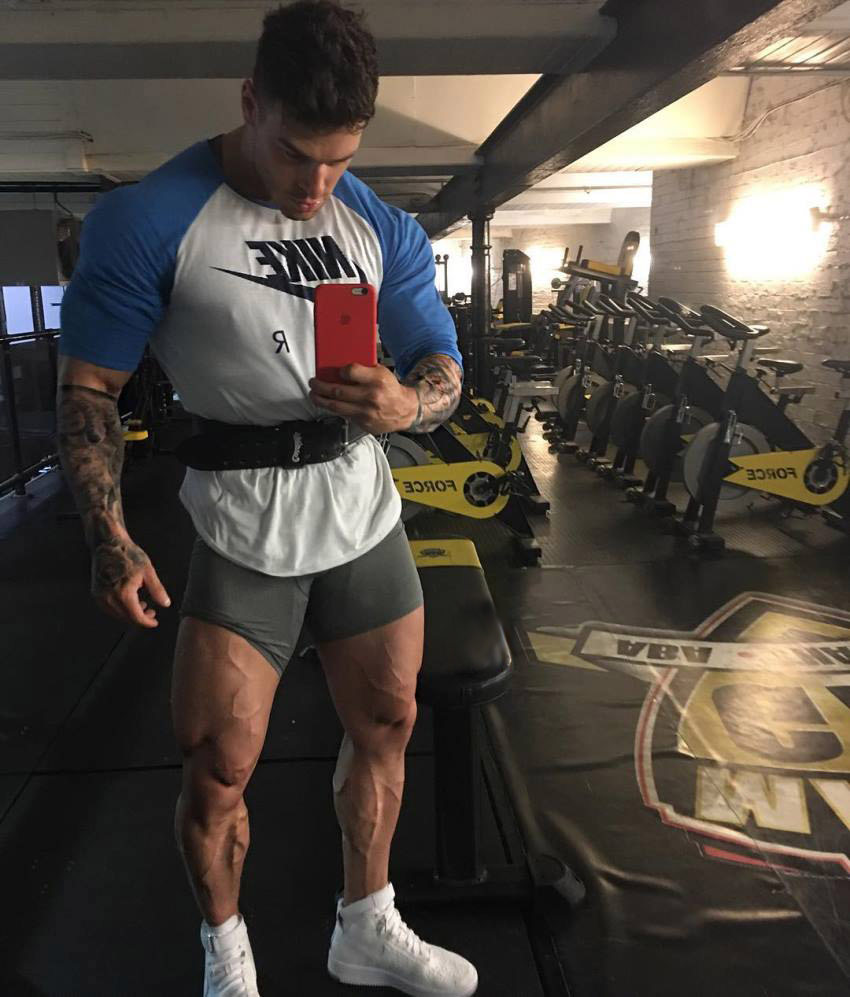 “Nobody will put in the work for you….. fall in love with the process but patience is always key.” – Owen Harrison

Competition in the Family

Lewis and Owen Harrison were born on September 13, 1990. They grew up in Leeds, Yorkshire, England, and were always active and interested in sports.

Before their “burst” into the fitness scene, the twin brothers spent most of their teenage years playing for some of the best soccer teams in the UK. It was during that time their competitive nature started to show. As Lewis said; “We played different positions and were always shouting at each other during the game if one of us made a mistake or did something wrong.”

After finishing high school, Lewis continued playing soccer for some time but said how his passion laid somewhere else in his life. After his contract with the soccer club ended, Lewis stopped playing altogether and went into personal training.

His brother Owen had a different vision at the time. He joined Royal Marines, which is one of the most elite armies in the world. Owen spent 4 years serving in the forces, and after coming back home, he decided to join Lewis on his personal training journey. 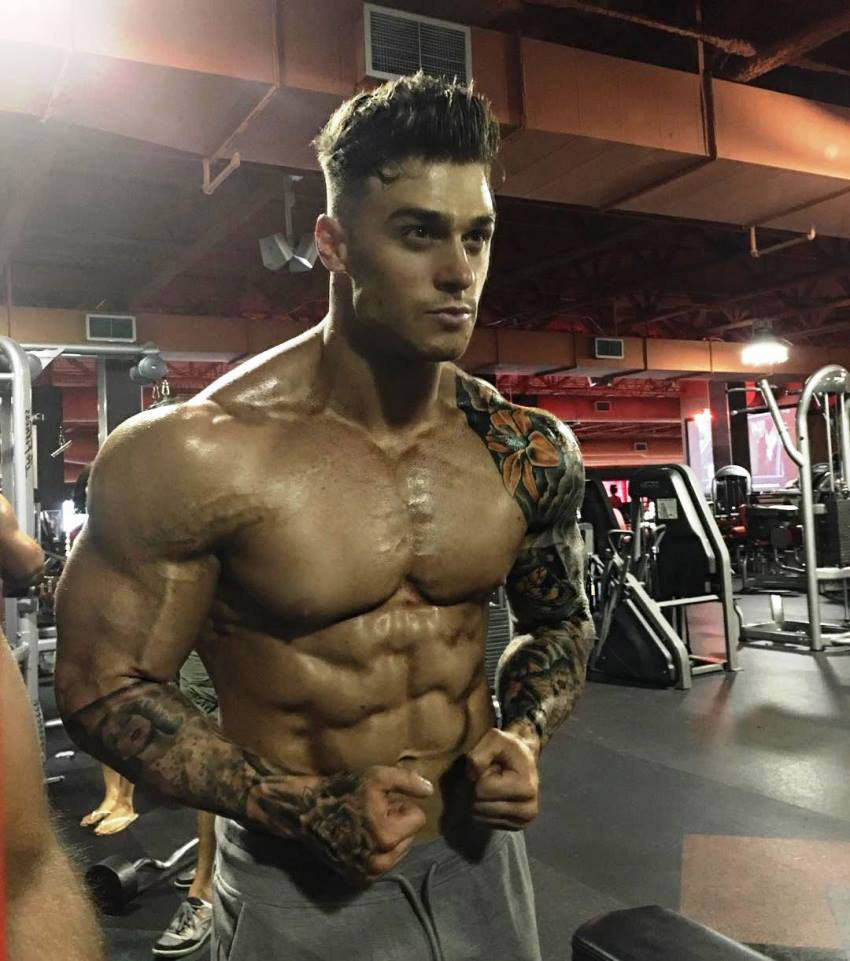 The Harrison Twins trained hard in the gym for a few years, sculpting almost identically looking physiques. They also successfully ran their personal training programs. Later, they got introduced to the world of fitness modeling by a family friend, who was a well-known photographer.

After noticing the potential that Lewis and Owen had, the photographer connected them with some of the most influential people in the fitness industry. It was at that point their brand, Harrison Twins, was created.

But it wasn’t always a smooth ride for the twins, as they had to work hard in order to build their brand.

“Building the Harrison Twin brand hasn’t been easy, but we have worked our arses off to get where we are today in this industry.” – Lewis Harrison

Rising to the Top

The Harrison Twins’ story motivated many people to go to the gym and take care of their bodies. Lewis and Owen continued helping people around the world achieve their goals and became extremely popular along the way.

Their success in the industry attracted a lot of attention from national newspapers, fitness magazines, and media around the world.

When it comes to motivation, both Owen and Lewis push each other’s limits every day. Neither one of the twins wants to be beaten by the other, or fall behind in training. That’s one of the reasons for their success.

Lastly, when asked what separates them from others in the fitness community, Owen said; “I enjoy the uniqueness of our brand a lot. I believe there is no one out there at the moment quite like us; tattooed twins with a body fat of 6% -7% is hard to come by! We’re definitely different, and we like that.” – Owen Harrison 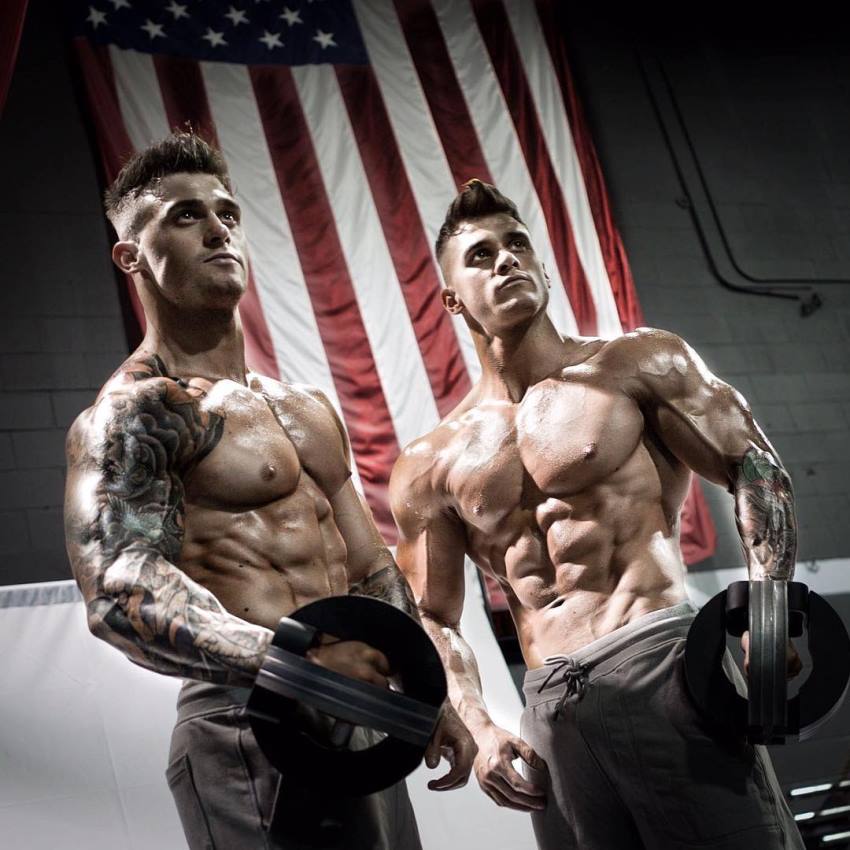 Their image is all about looking identical – that’s what “separates” Owen and Lewis from the rest.

Their style of training is rather simple – they stick to heavy weights and a lot of volume. According to them, this is by far the best way to force the muscle to grow.

Owen’s favorite body part is back, and Lewis’ chest. Naturally, each brother has their own strengths and weaknesses, so they both push each other in order to even out their physiques. When it comes to bench pressing, Lewis is “the king” among the two, but Owen is stronger in deadlifts.

For cardio, Owen and Lewis don’t like to do it often. They prefer doing the occasional HIIT sessions whenever they want to lose fat. The Twins claim they have great genetics that allow them to burn fat just by doing regular strength training. 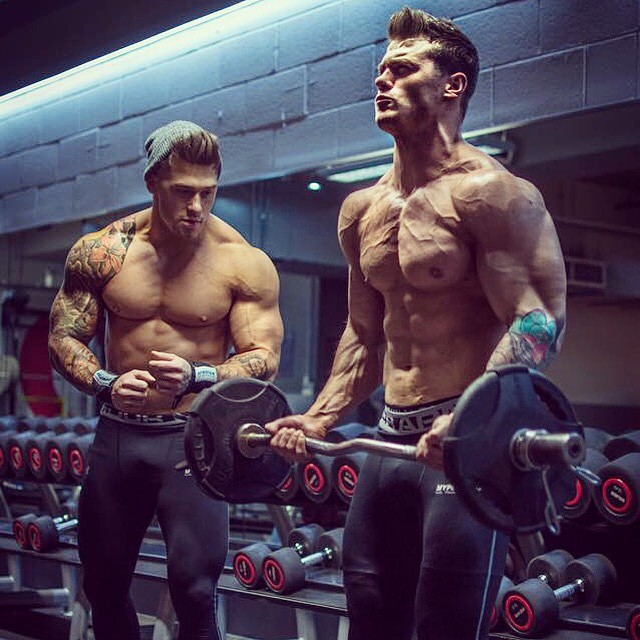 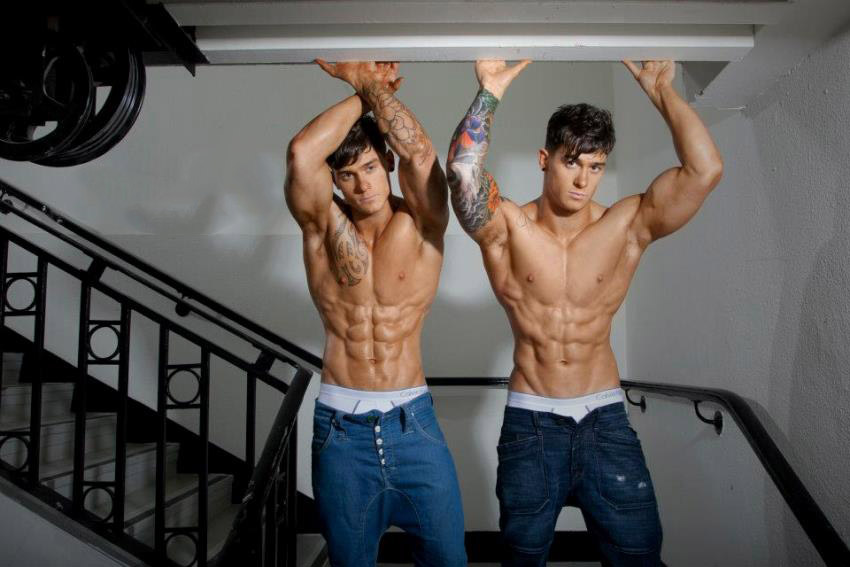 “Building a Physique is not an over night process, it takes years and years of dedication, hard work and consistency. Many want it, but few are willing to work for it.” – Owen Harrison

Same as with training, the Harrison Twins keep their diets identical. According to them, if Lewis has a cake after lunch, Owen will have the same.

Staying lean year-round is something Owen and Lewis are known for, and they claimed that the “secret” for their great looks is carb cycling. According to them, they never bulk or cut, but rather cycle high and low carbs every now and then. This keeps them “shredded” all year long.

Lewis and Owen are on top of their supplementation, as they believe it’s a key component of having a “perfect physique”.

This is their supplement stack; 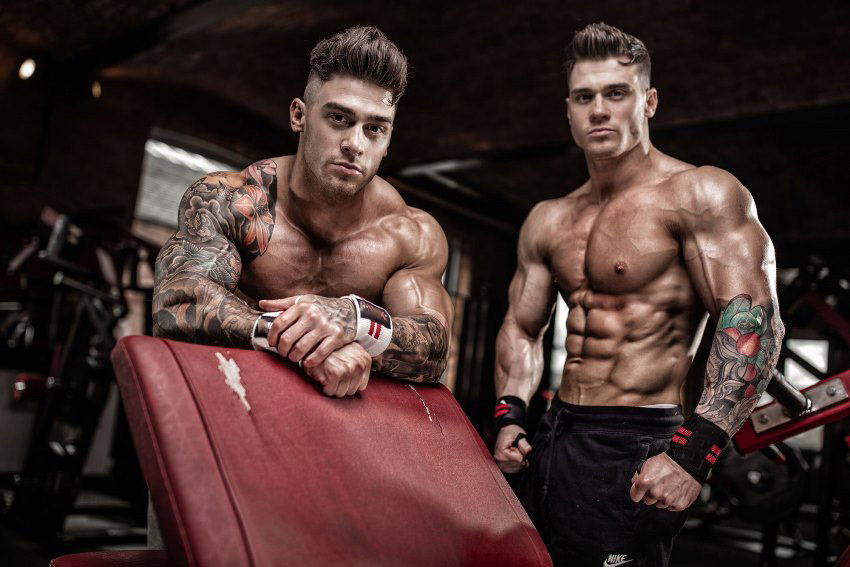 Zyzz is the main idol of Harrison Twins. According to them, he has been one of the main inspirations in their life, and one of the reasons why they started lifting weights in the first place. 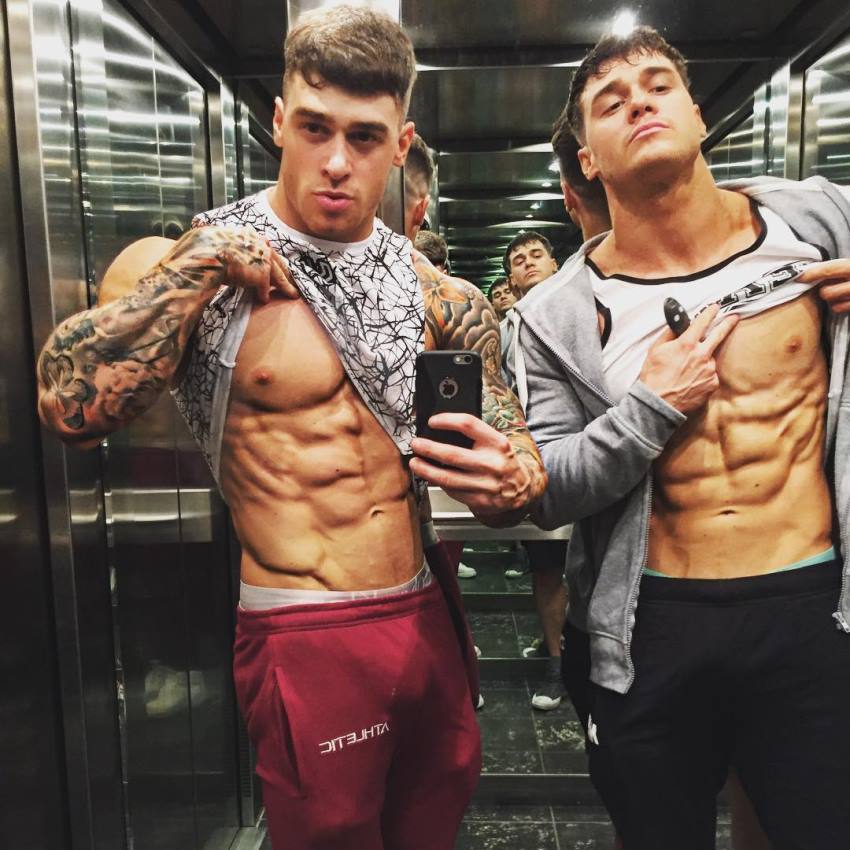 What we can learn from Harrison Twins

The Harrison Twins are a great example of synergy. They showed us that in order to succeed in life, we don’t necessarily have to walk alone.

Having someone besides you to guide you on your path to greatness makes the whole journey more interesting, and also more meaningful.

By sharing your journey with someone close to you, just like the Harrison Twins, you too could reach your desired destination in life.