Darrem Charles is an IFBB professional bodybuilder from Arouca, Trinidad. He has competed at the Mr Olympia 9 times and won 14 professional shows.

Growing up, Darrem was obsessed with playing sports – getting involved in strength training and working out with his friends in his local neighborhood. As he saw the changes in his physique, he began to think about competing and displaying his progress on the stage.

He began to compete and win in Trinidad, before starting to take part in shows in the US. Over the next two decades he would establish himself as the best bodybuilder to ever come out of Trinidad. He achieved top ten finishes at several Mr Olympia’s and won a number of major competitions including the New York Pro Championships.

At 46, Darrem returned to the competition circuit, winning several more major competitions in the classic physique category. This is his story: 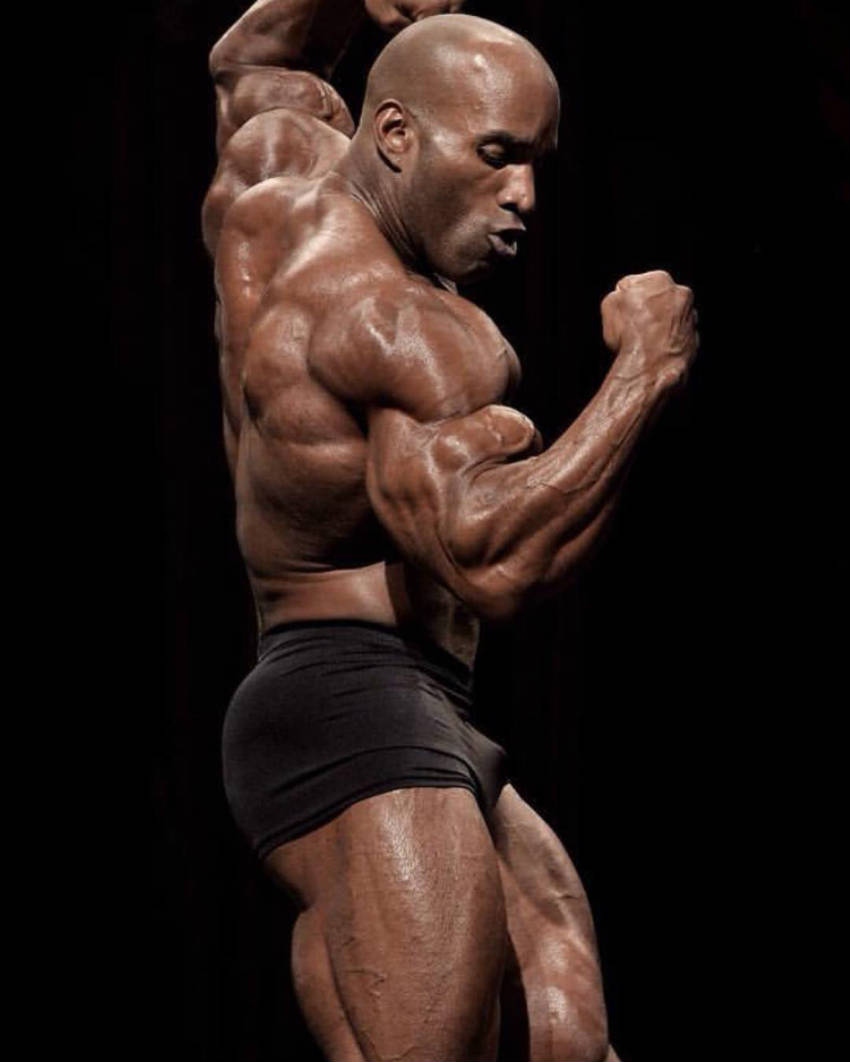 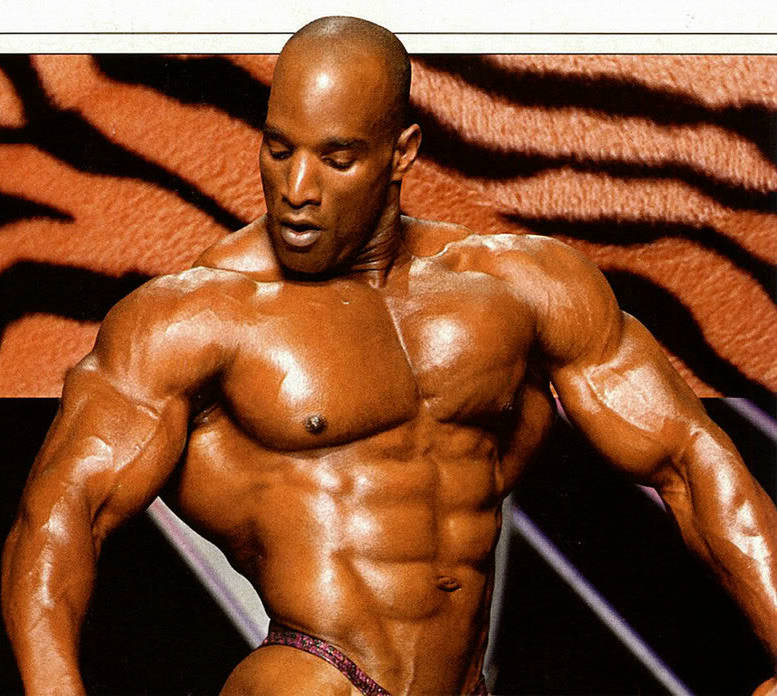 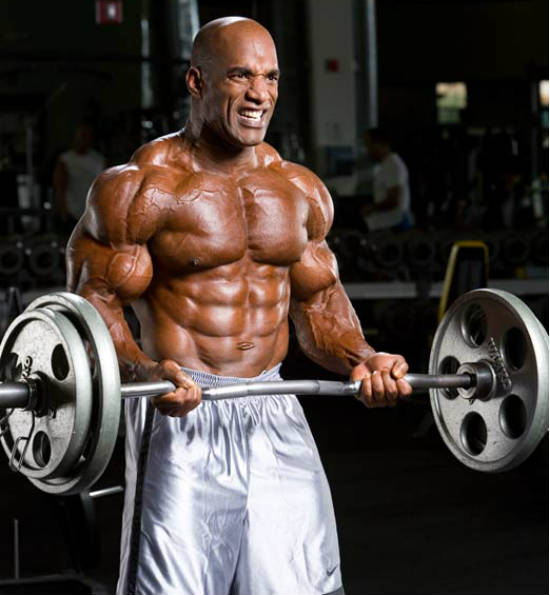 “I’m looking forward to this show…and once I walk on stage you will see why my confidence is so high.”

Darrem Charles was born in Arouca, Trinidad. He was always obsessed with playing sports – becoming involved with strength training as a young teenager.

As he kept working out with his friends, he began to notice changes to his physique which inspired him to pursue the sport further. He bought and read several books on bodybuilding technique and nutrition, which helped him learn the basics in these early stages.

After soaking in this information, Darrem got off to a successful start. After a long period of training, he won his first natural competition – the 1986 WNBF (World Natural Bodybuilding Federation) contest. This victory on his first attempt was a great confidence boost for Darrem, but he was determined to win more.

He would go on to win the 1989 Trinidad Invitational Natural – wining on his home soil in front of his family and friends. This for Darrem was the signal that he had to take this sport further. He followed the win up with another victory at the 1992 World Amateur Championships.

Darrem had always wanted to become a well-known figure in the American scene. In the 1980’s, the U.S.A was the center of international bodybuilding. Darrem saw greats such as Frank Zane in magazines and wanted to have a career just like theirs.

In 1992, this dream became a reality when he competed at the Chicago Pro Invitational. Unfortunately, he only managed to come in 12th place, but he loved the experience of standing alongside bodybuilding pro’s.

As it happened, Darrem was actually on the same stage as future hall of famer’s such as Kevin Levrone – so was in great company for his first pro show without realizing it at the time.

Following this Chicago show, he appeared at the Arnold Classic, Ironman Pro and a number of other major shows. From 1992 to 1995, he took away 8 top ten spots including a well-deserved 3rd at the 1995 Florida Pro Invitational.

This consistent form enabled him to qualify for the 1995 Mr Olympia – a dream come true for Darrem. In this show, he stood alongside Dorian Yates, Flex Wheeler, Ronnie Coleman and Chris Cormier and came last, but learnt a lot from his appearance.

The rest of the 1990’s for Darrem, was a useful period of learning. He came in the top ten in every competition he entered, picking up useful 3rd’s at the 1995 South Beach Pro Invitational and 1998 San Francisco Pro Invitational.

After this he took a 2nd at the 1998 Ironman Pro Invitational, which was major achievement for Darrem. He really wanted the win, but knew that he had done all he could at that point.

As the decade came to a close, Darrem also landed a 13th at the 1998 Mr Olympia. This was a clear improvement for him, so he entered the new millennium confident of his future potential in the sport. 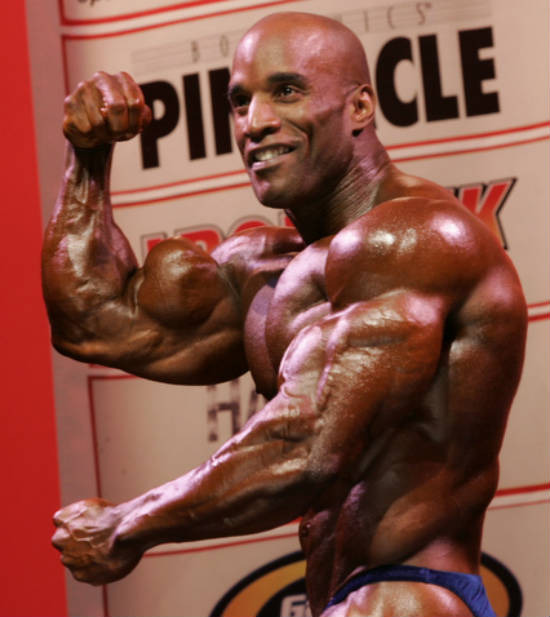 In the 2000’s, Darrem started strong with a 3rd at the Toronto Pro Invitational. The following year, he trained for months and aimed for a win a the 2002 Southwest Pro Cup. He ended up winning the contest with ease – beating tough opposition from around the world.

He followed this up with a 1st place at the 2003 Maximum Pro Invitational. This allowed him to qualify for the 2003 Mr Olympia, where he came a strong 7th and took $15,000 for his efforts.

One of this best wins in the 2000’s, was his 1st place at the 2005 New York Pro Championship. This show is a major event, so Darrem had to beat the likes of Victor Martinez in order to take home the win. He managed to add a large amount of refined mass to his upper body in the offseason; carrying this new bulk well, with a well-proportioned aesthetic.

He won several more shows, such as the 2007 Montreal Pro Championships and the 2008 Atlantic City Pro, before taking a break in 2013.

Darrem’s success in US competitions, enabled him to attract attention from high-profile magazines. In 2000, he appeared in an issue of the popular lifestyle magazine ‘Pump’. He also had a spread in ‘Muscular Development’, as well as FLEX magazine.

In 2016, Darrem returned to the professional competition circuit after a 3 year break. He began to compete in the classic division, as he was now 46 years old, but he still had the drive to win and train to his limits.

Due to this hard work and determination, he landed a 2nd at the 2016 Pittsburgh Pro. He followed this up shortly after with a 1st at the 2016 Miami Muscle Beach,then 3 1sts in a row at the Puerto Rico Pro, Toronto Pro and Wings of Strength Chicago Pro. 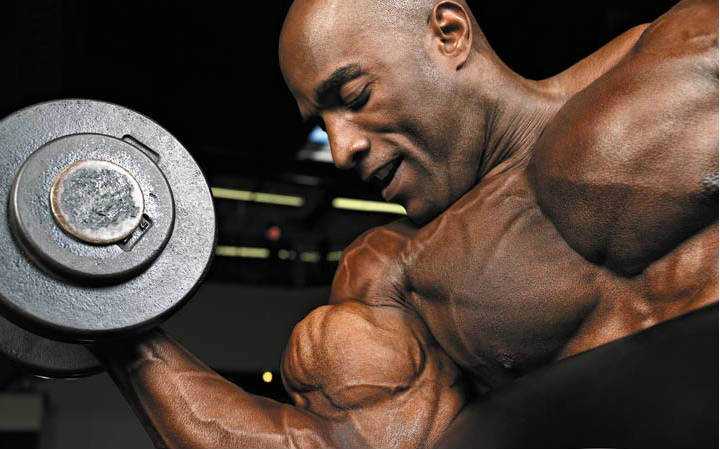 Darrem’s training split allows him to spend sufficient time on each muscle group. He completes his least favorite session (leg day) on day 1, then separates the chest, back and shoulders across three days. Doing so, means that he won’t work his central nervous system too hard by working 2 major muscle groups at the same time.

His usual split and routine is below: 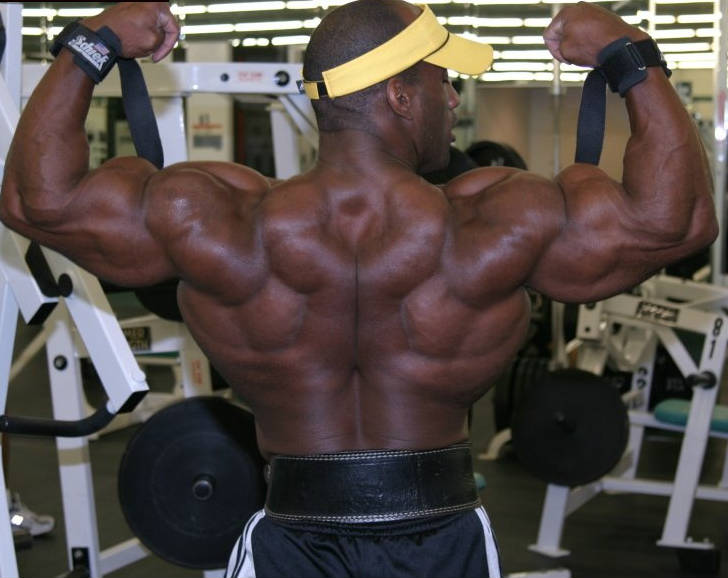 Darrem’s arm workouts are particularly punishing. He aims to work all the muscles to their limits; pushing to failure on a number of sets.

An outline of Darrem’s typical arm day session is below.

The cable pressdown is one of Darrem’s favorite exercises for the triceps. He uses the exercise as an isolation movement that adds both size and definition to his arm. He focuses on both form and weight here, in order to attack the muscle fibers as much as possible.

The lying barbell extension is another staple in Darrem’s routine for the triceps. The exercise hits the triceps harder than any other and is used by Darrem to attack the long head, lateral head and the medial head at the same time.

His final blow to his triceps comes in the form of the Dumbbell Kickback. With his knee on the bench he performs the kickback in a slow controlled arc. He mentions that it is common for peopel to swing their arm, but this can lead to injury, so slow and controlled is the way to go.

For overall bicep mass, dumbbell curls are a “bread and butter” movement which he loves to include in his session. Darrem says he has done them every week since he turned pro in the early 90’s. He always completes them just before a barbell curl in order to stimulate the muscles and warm them up effectively.

For Darrem’s barbell curl set, he aims to hit the muscle hard, with intensity. He aims to trigger the growth response, but he doesn’t want to tire the muscle out, so he focuses on three sets. He chooses to use a slightly lighter weight than his max so he doesn’t burn the muscle out too early in the set.

He chose the dumbbell preacher curl as his final movement due to the fact that it focuses stress on the short head of the bicep. Because of this, the movement allows him to develop the desired peak on the muscle.

He cab also add fullness to the lower portion of the bicep. He views this as a great end to a punishing, but very effective workout.

Darrem says that he spends a lot of his training time on improving his routine. His dynamic and inspired posing routines take months to prepare and his fans appreciate all the effort that he puts in.

When he is working out each movement in the routine, he finds inspiration from a lot of different places. He watches music videos, and spends “hours and hours” trying to find the right dance move that will impress the judges and the fans in equal measure.

Cardio is essential in Darrem’s routine. He needs to burn off any excess fat before competing, so needs to build cardiovascular fitness during the competition preparation stages.

One of his favorite types of cardio is riding his bike. He loves to be outdoors, cycling in nature and breathing fresh air. He says that he will choose this over the treadmill anytime – if the weather permits.

Similarly, whenever he can, he loves to complete short jogs outdoors in his local park. Her believes that there are few exercises that can match jogging for sheer calorie burning. 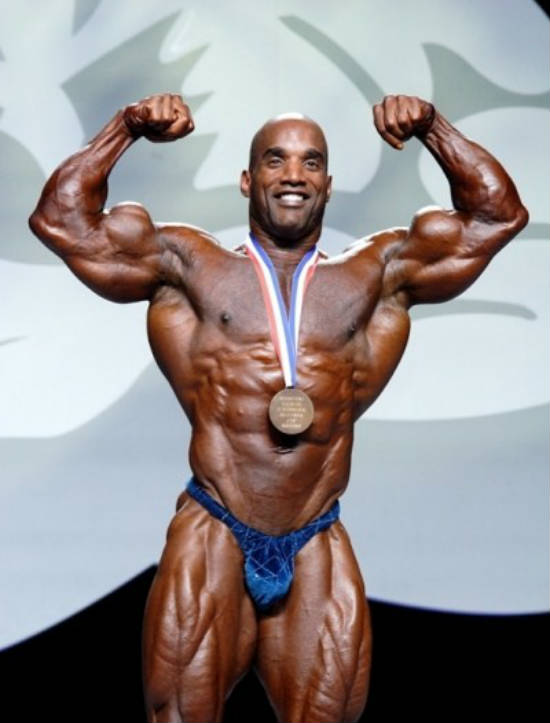 Darrem believes that a healthy, nutritious diet with adequate protein content is sufficient for a bodybuilder. He relies on healthy, organic foods for his meals, such as free range eggs and quality meat products.

Darrem also likes to stay relatively lean in the off-season, so doesn’t really eat ‘cheat meals’ much, as he doesn’t want to gain weight. In terms of meal frequency, he likes to eat a meals every couple of hours to stay anabolic. An example of a meal plan during the competition season is below: 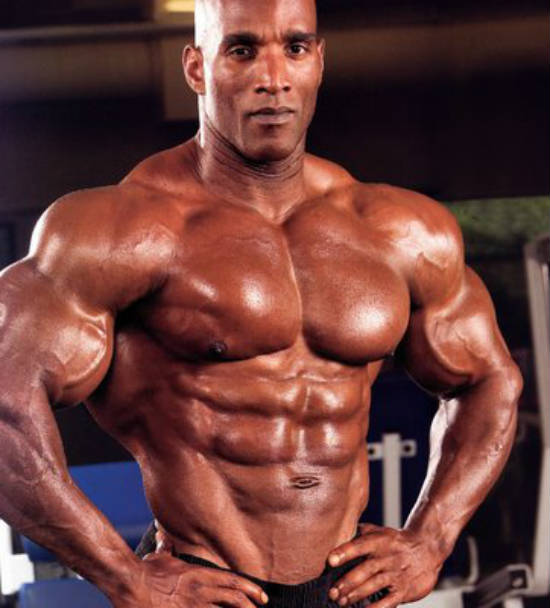 “My fans and friends have always been loyal. Many of them have been there from the very beginning.”

Darrem’s main influences are his family and loved ones. His partner is always there for him when he needs encouragement, which is often very useful in the competition prep stages.

He also says that his fans have been a huge driving force in his career. Without the positive comments he has received from them throughout his career, he says that he would have struggled to maintain his drive. 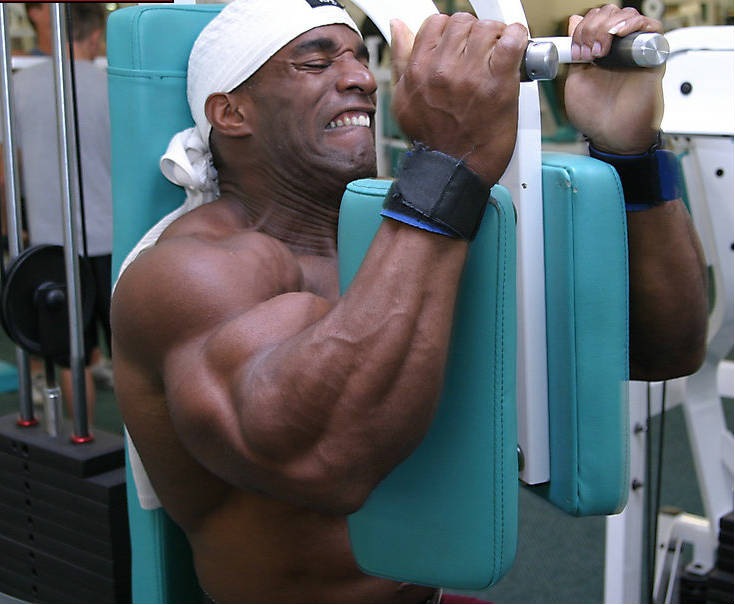 What we can learn from Darrem Charles

Darrem Charles shows us how the bodybuilding career is more than just a job. To the men who spend their entire lives sacrificing and striving to become the best, it truly becomes a lifestyle.

Darrem grew up in Trinidad and decided that he would make his mark in the US bodybuilding scene. For almost three decades after that, he worked as hard as he possibly could to create the legacy that is attached to his name today.