Benjamin Radic is a Musclemania Pro bodybuilder, personal trainer, and fitness athlete from Slovenia. His journey into sports began while he was still in primary school. Taking part in judo, tennis, and volleyball, Benjamin knew from the start he wanted to become an athlete.

But, he didn’t always plan on becoming a bodybuilder. As a teen, Benjamin’s goal was to master judo. He was well on his way to achieving his plan, until one day, when he broke his leg.

As a part of his recovery process, Benjamin began going to the gym. He began learning about bodybuilding and nutrition to speed up his recovery as fast as possible. It was during this process that Benjamin fell in love with the ‘iron’ sport, and has never turned back. 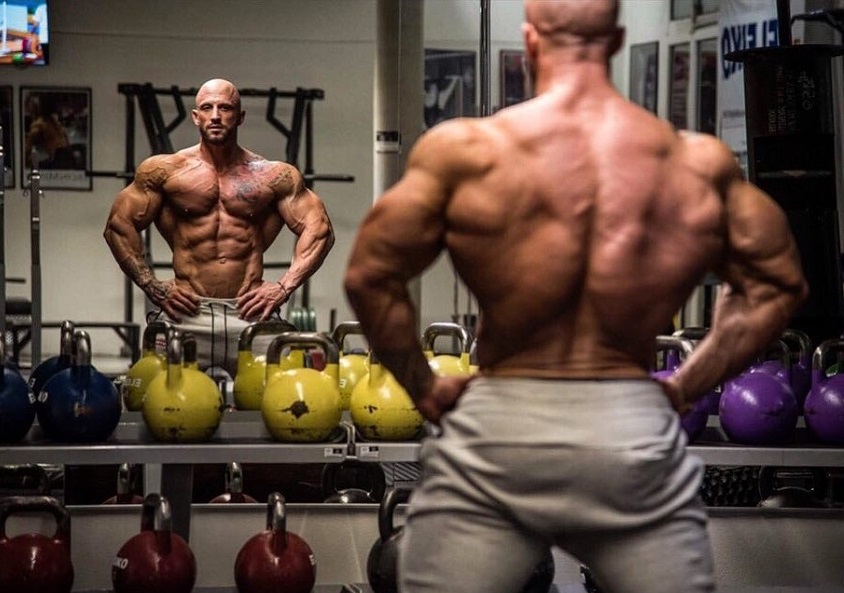 “I love bodybuilding and I love having big rounded muscles. But, keeping [an] aesthetic look stays priority.” 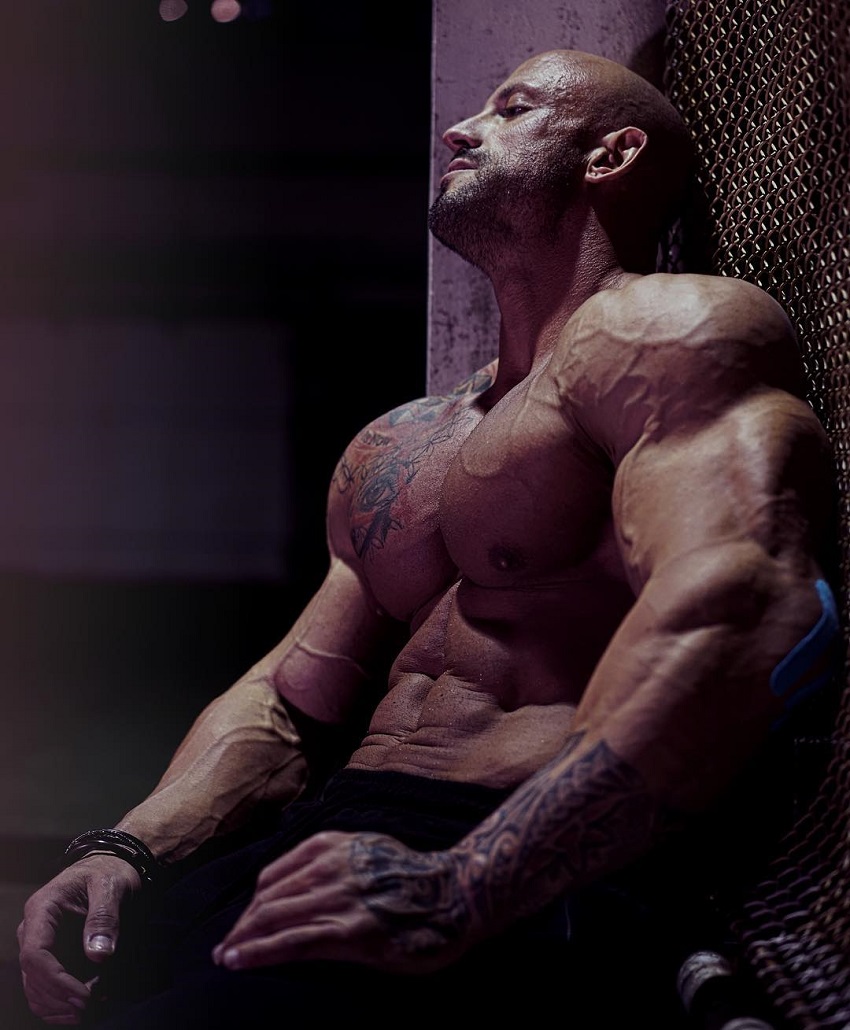 “It is necessary to suffer or work hard in order to succeed or make progress. Do you agree?” 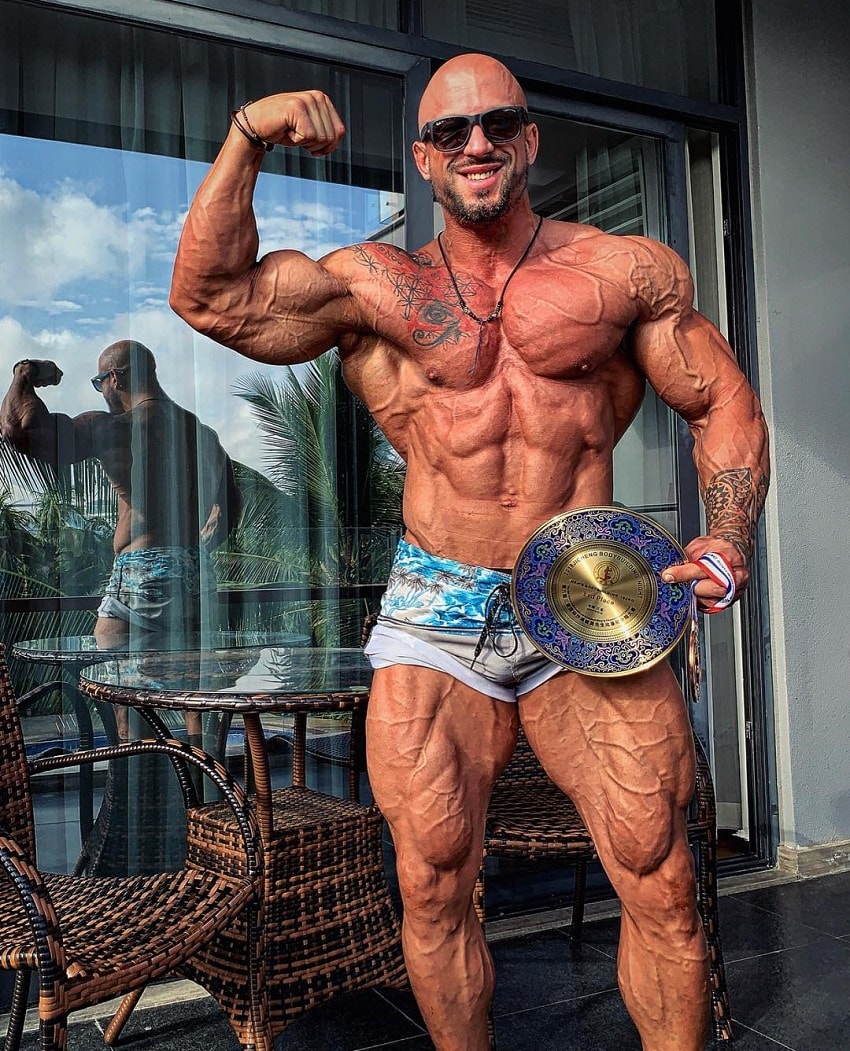 “There is time for everything; a time to make the best and a time to take a rest.”

A Love For Sports

Since he was a kid, Benjamin Radic loved to play all kinds of sports. He took part in both school sports and extracurricular sporting activities.

Around the age of 10, Benjamin began focusing on tennis and volleyball. He quickly excelled in these sports, so much so that he had the opportunity to make a career out of them.

However, Benjamin had one problem in achieving this. He wasn’t strong or fast enough to reach the ‘next level’ in these sports. Benjamin says he was a young skinny guy at the time.

Inspired by the likes of Arnold and Stallone, he decided to improve his body by training with weights. “I was forced to train heavy to develop the strength that would help me prevent injuries,” says Benjamin.

Switching Over to Judo

As he strengthened his body through training, Benjamin began to like fitness more and more. “I started to like it more than other sports because I was gaining muscles really fast and my physique was changing fast too.”

However, Benjamin still trained at home at this point. He still wasn’t familiar with the full potential he could achieve by training with more complex machines and equipment in the gym.

Eventually, he joined the weight room and was instantly amazed by all the training equipment he saw. It was at this point, Benjamin’s love for bodybuilding began to emerge. 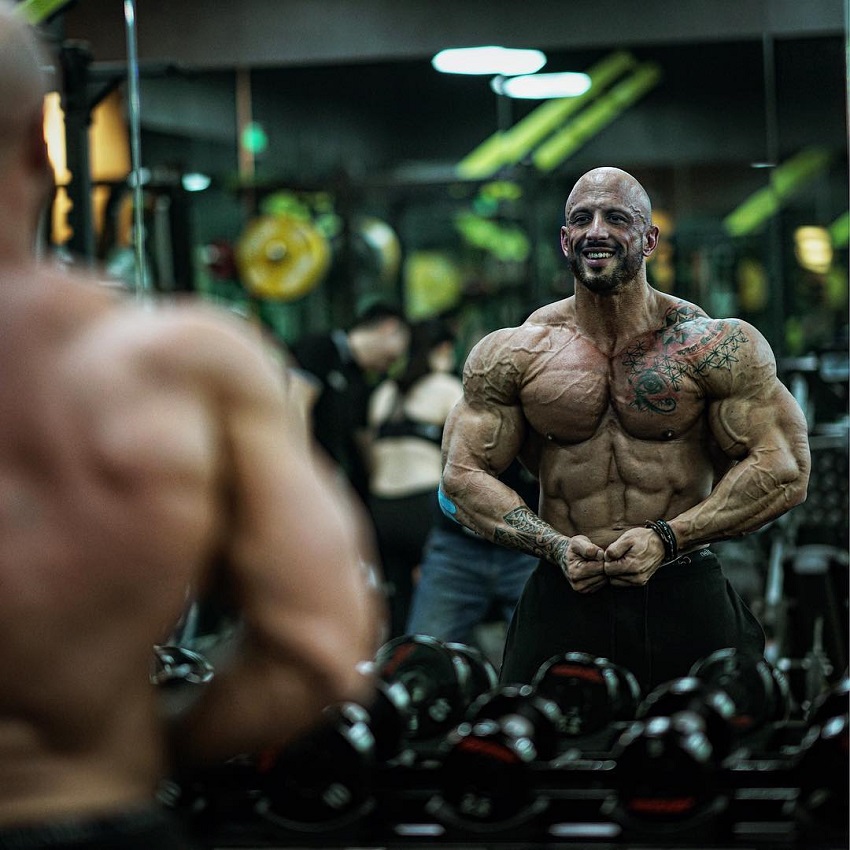 In time, Benjamin left tennis behind and decided to focus on judo and bodybuilding. In his eyes, these two sports would help him become flexible, fast, and strong at the same time.

Everything was going well for Benjamin at first. His muscles became bigger, and his mobility improved from judo training. But then, an accident happened.

Benjamin broke his leg during a judo session. This forced him to step away from the discipline for a long time.

One thing Benjamin could still do, though, was to train with weights. And he did exactly that.

While he couldn’t exercise his broken leg, Benjamin was still able to work on the rest of his body. Once his leg recovered from the injury, he quickly grew it back to its original strength and size. It was during this process that Benjamin decided to leave judo behind and focus on bodybuilding instead.

After months of training, Benjamin gained a lot of muscle on his frame.

“I loved lifting heavy and getting a good pump and soreness the next day and also eating big. My bodybuilding journey starts more seriously at the age of 23-24 when I started to use supplements and I gained a lot of muscle mass really quick.”

Benjamin’s results in the gym didn’t go unnoticed. His friends soon started asking him for fitness tips and advice.

At first, Benjamin would only help his friends with training advice. But over time, he realized he could make a living out of helping others.

Naturally, this led Benjamin to find a job in a local gym where he worked as a trainer. He later earned a certificate in personal training and started his own business as a personal coach. 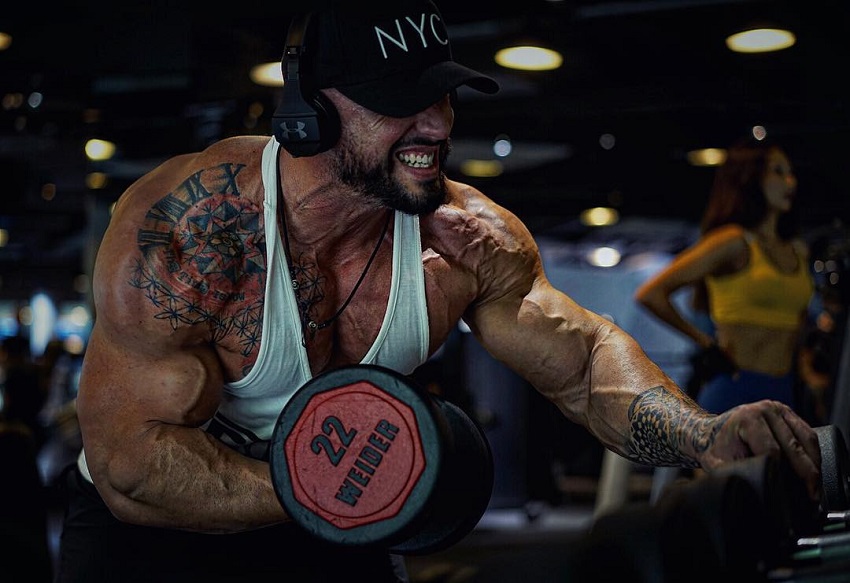 “Time passed by and I still wasn’t interested in competing but I kept training really hard,” says Benjamin.

One day, however, Benjamin posted a picture of his ripped physique on an online bodybuilding forum, and saw the post go viral. He received positive reactions from a large number of people.

Among these people was a sports company representative who offered Benjamin to become a sponsored athlete for contests. Although reluctant at first, Benjamin later decided to start his competitive career at last.

Life as a Pro Athlete

Ever since joining the bodybuilding circuit, Benjamin has seen his career thrive. He took part in his first contest in 2012, winning the 2012 Musclemania Paris.

From there, Benjamin’s results only improved, leading him to win the 2013 Musclemania UK championships – as well as his Musclemania Pro Card.

Alongside his success on the stage, Benjamin Radic has also opened a new gym and has become a renowned personal coach for many aspiring athletes. 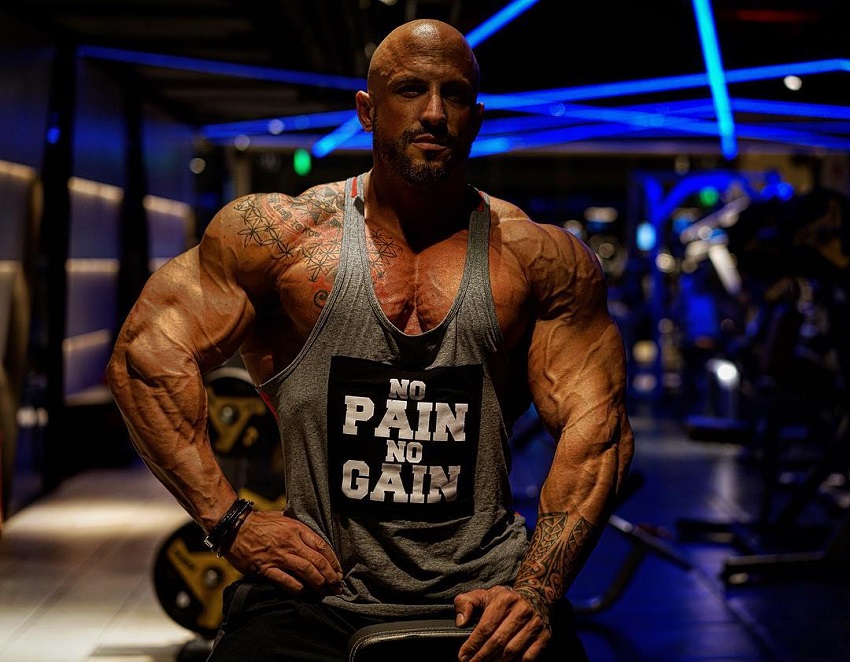 A Day of Training

After waking up, Benjamin Radic hops on a treadmill and starts his fasted cardio session. In his experience, training on an empty stomach brings him the biggest fat loss benefits.

After the 3rd or 4th meal of the day, he’ll have his second training session – weightlifting. Once Benjamin enters the gym, he means business. Every exercise, set and rep is carefully structured into his workout routine to maximize results.

Push-pull is his favorite type of training regimen. He also adds a lot of supersets to his workouts to increase intensity. In terms of reps and sets, Benjamin likes to do 8-12 reps and 3 sets of 2 super-setted exercises.

Ending his workouts with 4 sets of 10-12 reps using a ‘finisher’ exercise, Benjamin leaves the gym completely exhausted and ready to eat a hearty meal. 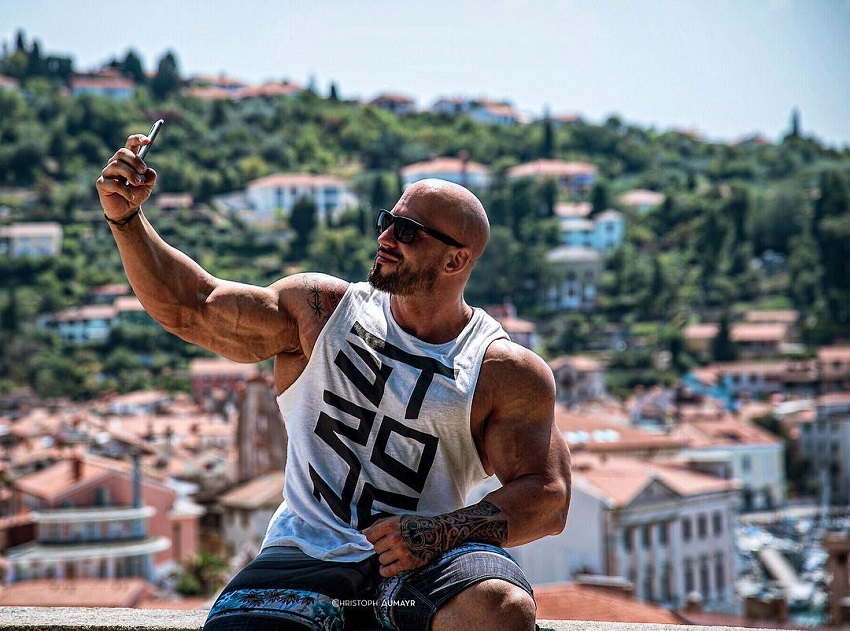 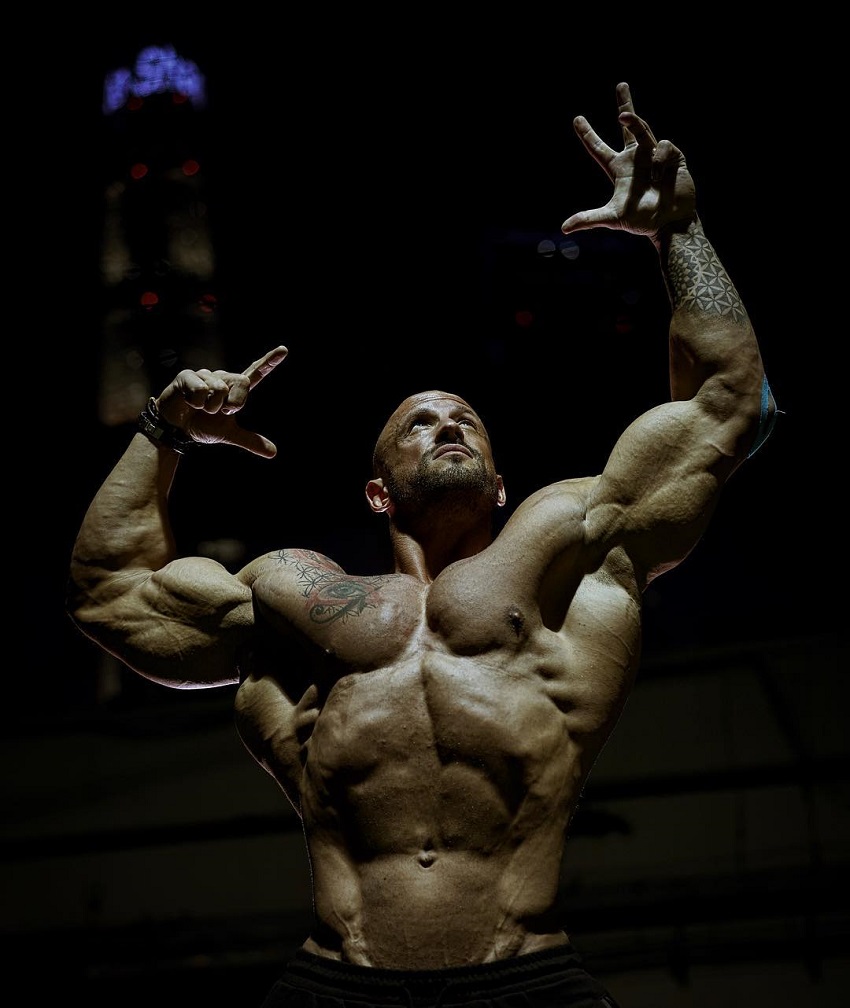 Benjamin Radic switches between low-carb and high-carb diet, depending on how he feels and what his goals are.

“I get most of the carbs from food like brown rice, sweet potato, and oatmeal.”

One thing, however, always stays the same – Benjamin’s protein intake. He keeps his proteins high at all times to ensure proper muscle growth and avoid muscle breakdown during a cut. 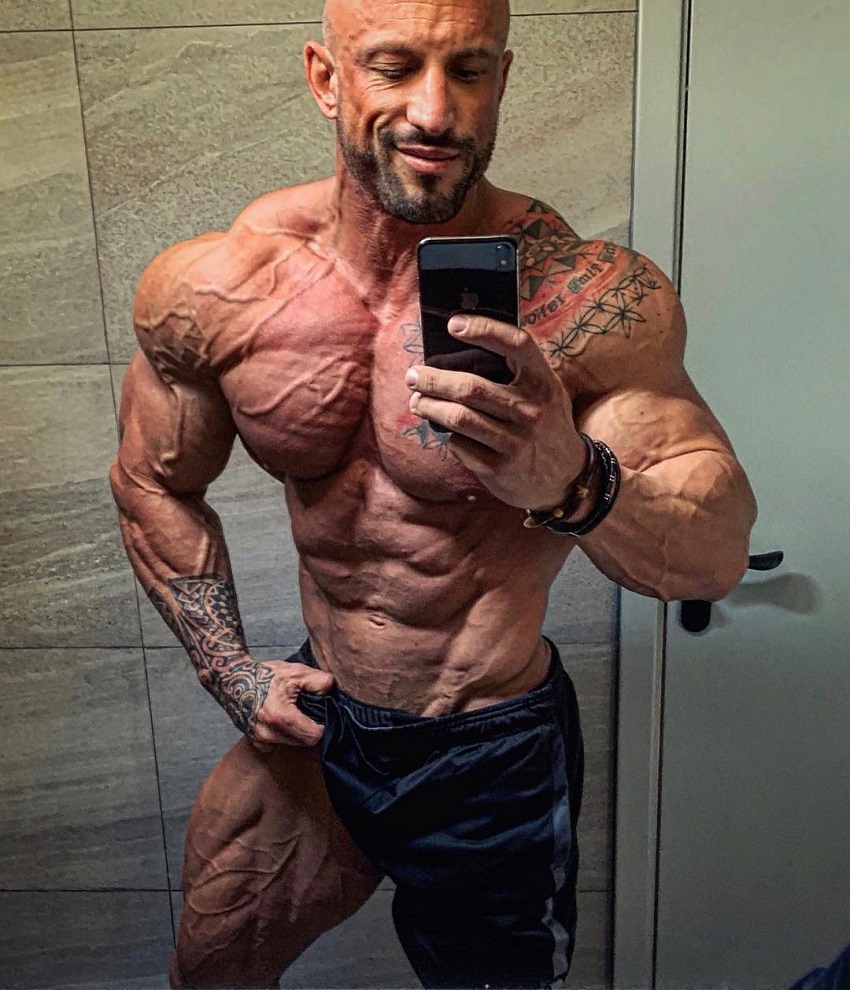 During his teens, Benjamin became fascinated by movies featuring muscular stars, such as Arnold Schwarzenegger and Sylvester Stallone.

Looking at their physiques, Benjamin knew he wanted to become like them one day – aesthetic, strong, and ripped. 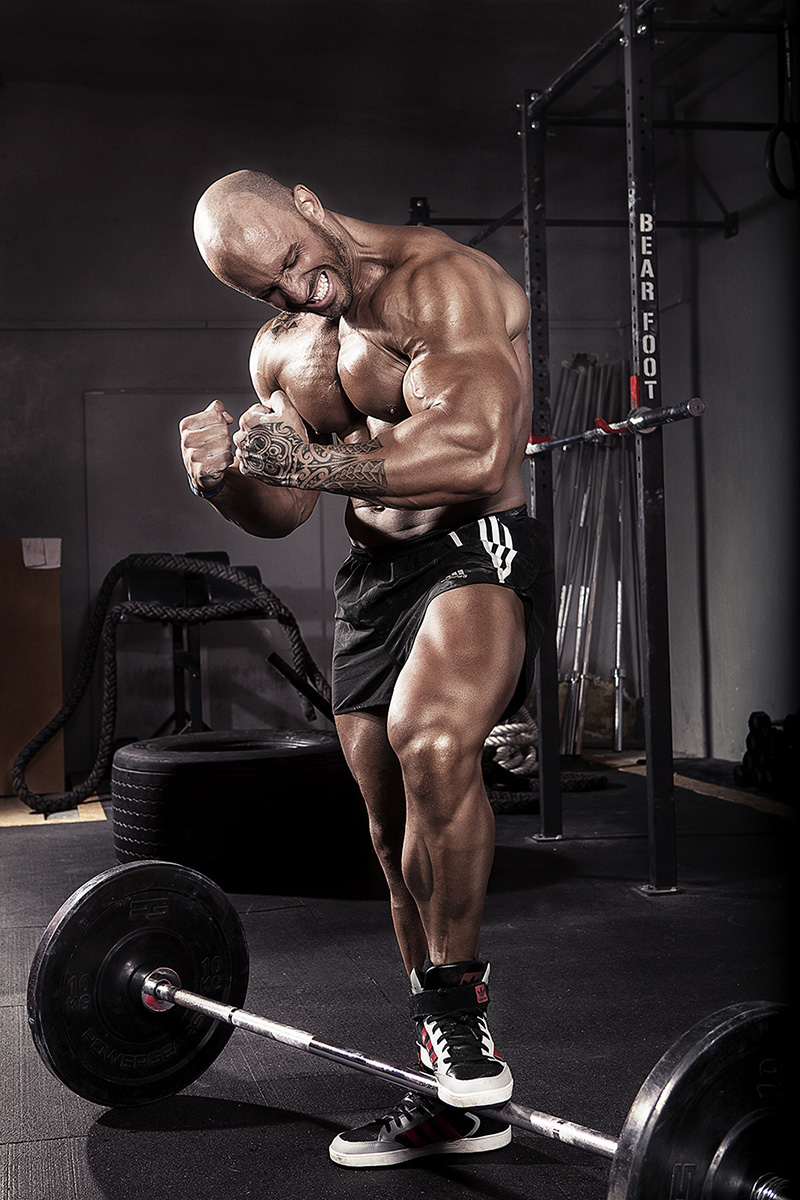 What we can learn from Benjamin Radic

One characteristic of Benjamin’s that stands out from the rest is that he never gives up, no matter what. He faced a serious injury in judo, breaking his knee, but didn’t let this hold him back. Instead, he set his mind on achieving new goals and made them happen.

With countless setbacks, Benjamin has stepped up to the challenge and did the work necessary to get to where he is today. With the same determination, you too can overcome obstacles and become your own greatest version.