Zoe Daly, also known as ‘Zozofit’ grew a love for sport from an early age. Following in the footsteps of her parents and older brother, Zoe began to take part in competitive sports ranging from baseball to athletics throughout her childhood years.

With the aim of building upon her sporting beginnings, Zoe entered the gym for the first time at the age of 16. However, she hardly made any progress as she paid little attention to her training routine and diet plan. But, by the time she reached her early 20s, that all began to change.

It was at this point, Zoe became inspired by the incredible physiques of female bikini competitors such as Jennifer Nicole Lee. From then on, Zoe set out to build upon her athletic physique and excellent core strength that she acquired by taking part in competitive sports. 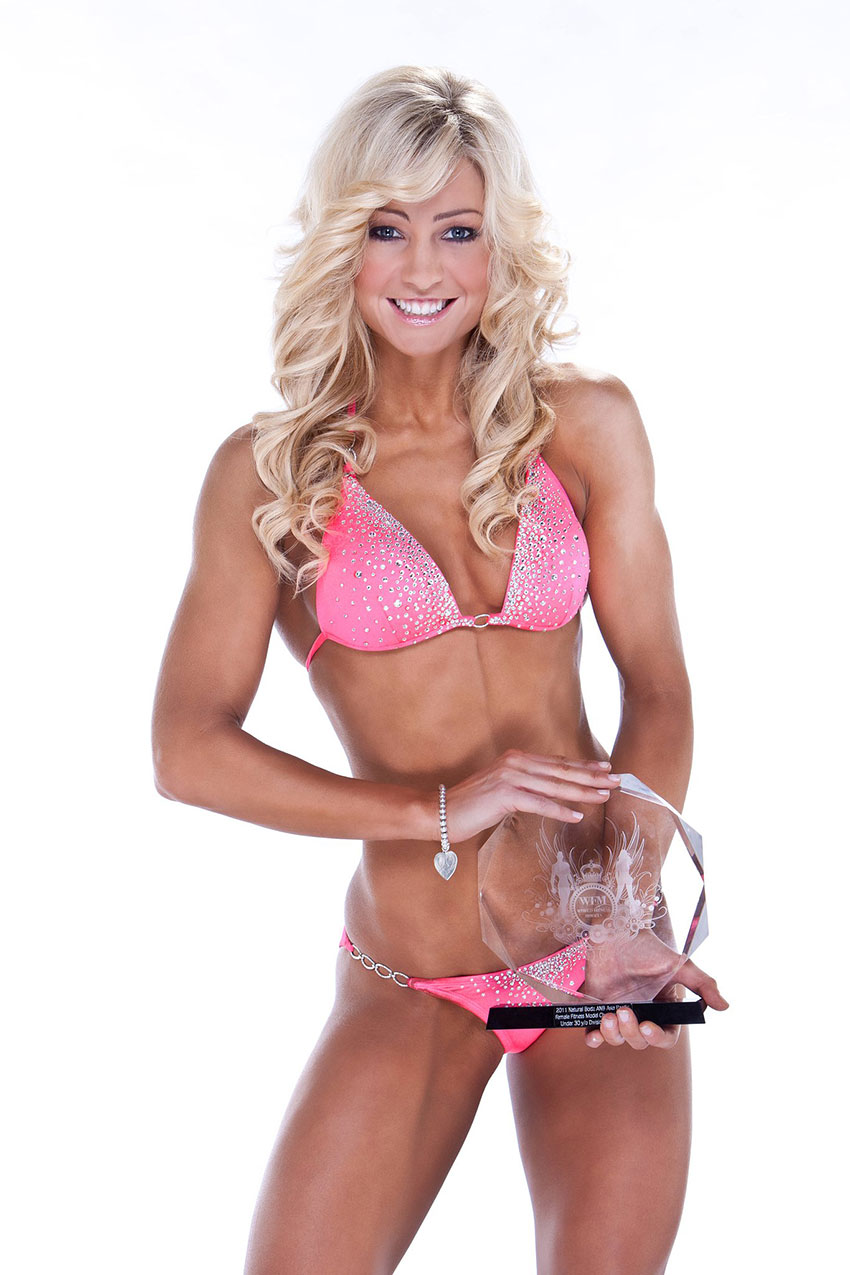 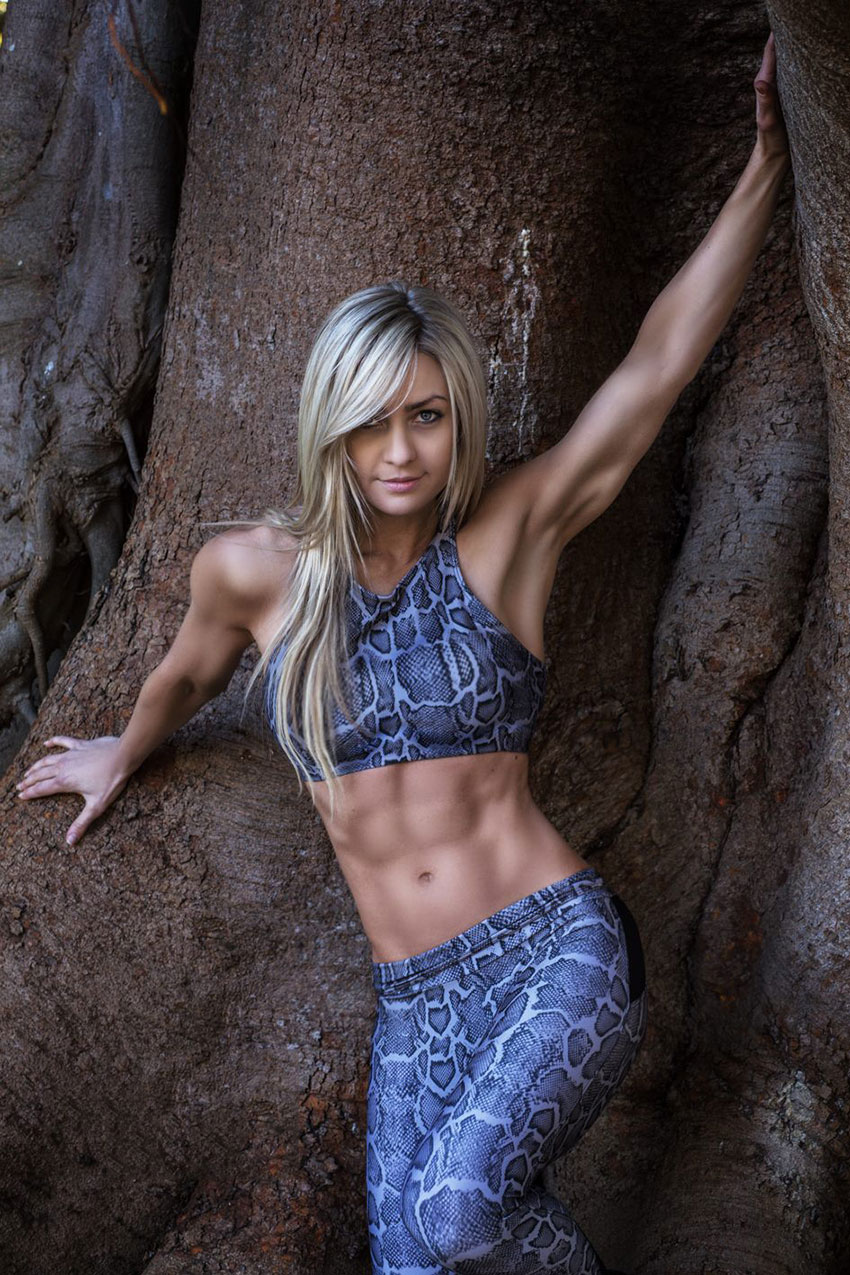 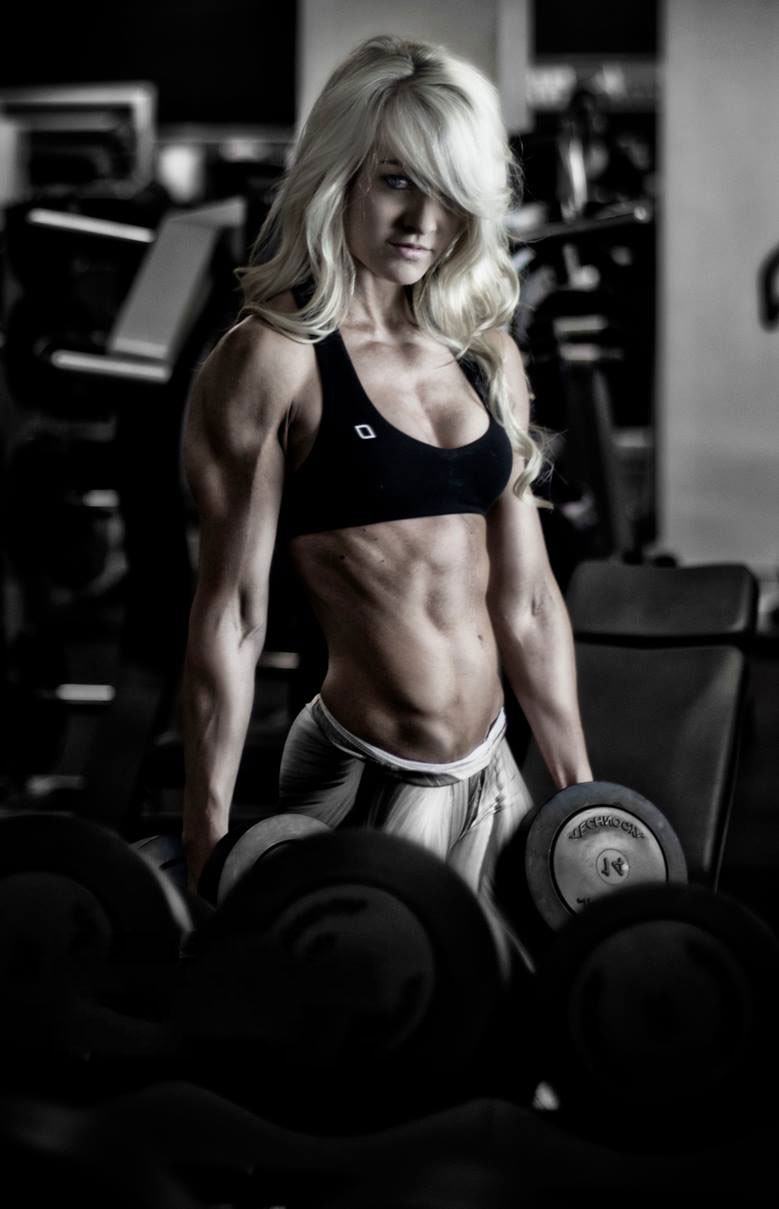 Zoe’s passion for sport began throughout her childhood. Born and raised in Australia, Zoe took influence from both her parents and older brother who were all followed an active lifestyle. Because of this, Zoe began to take part in a wide variety of competitive sports such as baseball, surfing, and athletics alongside her studies in high school.

During this period, Zoe was able to earn herself an athletic physique, while building great core strength in the process. At the age of 16, Zoe decided that she wanted to build upon this, entering the weights room for the very first time.

During her first few years in the gym, Zoe lacked consistency in terms of her training routine. In addition, she paid little attention to her eating habits. Consequently, Zoe failed to make the progress that she desired.

This was no longer the case by the time she reached her early 20s. This is when Zoe started to conduct research on building lean muscle, adopting a healthy diet in the process. From then on, she quickly began to make considerable progress – forming the foundation required to build a great physique. 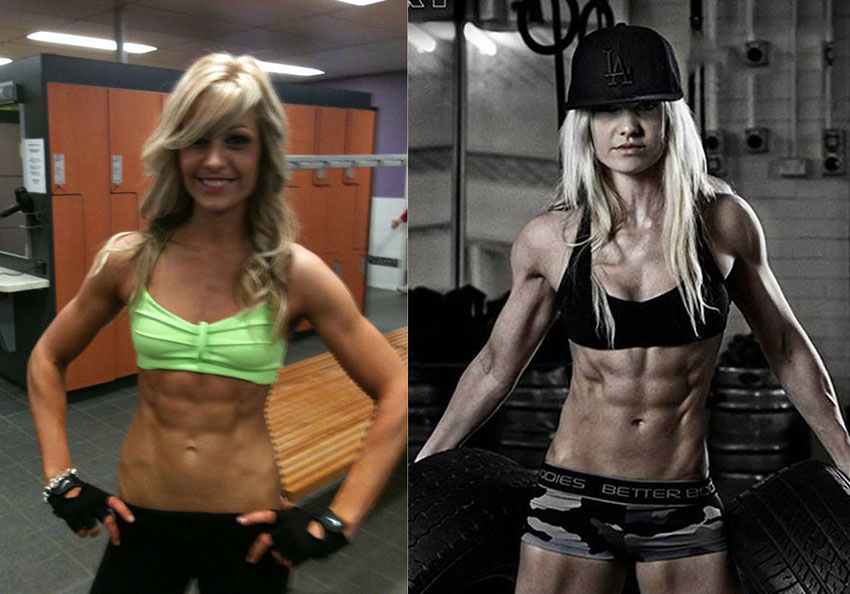 Zoe Daly before compared to how she looks now.

As a result of Zoe’s consistency and hard work training in the gym, she was able to build a phenomenal physique that was the envy of her training partners. After reaching all of her fitness goals, Zoe’s friends suggested that she could become a personal trainer to help others reach the same level of success. In 2008, Zoe did just that.

Personal training offered Zoe the chance to help others achieve a great physique – just like her. Seeing her clients progress motivated her further, as it made Zoe aware that she was positively influencing others to achieve things they never thought they could.

By 2010, Zoe was asked if she had competed as a bikini model before. However, competing was never something that Zoe had considered previously. Until this point, she wasn’t aware of competing at all.

But one day, Zoe became interested in the idea of becoming a bikini competitor. From then on, Zoe took it upon herself to prepare for her first competition: the 2010 ANB Sydney Physique Championships, under her own guidance. She finished in 3rd place in the competition, finding that bikini competing was her true calling.

After achieving success in amateur competitions such as the 2010 IFBB NSW State Titles, where she finished in 1st place, Zoe set her sights on earning her Pro Card.

At the WBFF World Titles competition in 2013, she stormed to a 2nd place finish – earning her WBFF Pro Card as a result of her excellent performance.

This was a remarkable achievement in Zoe’s career, as it led her on the path to social media fame. In the process, she’s managed to inspire people all over the world. 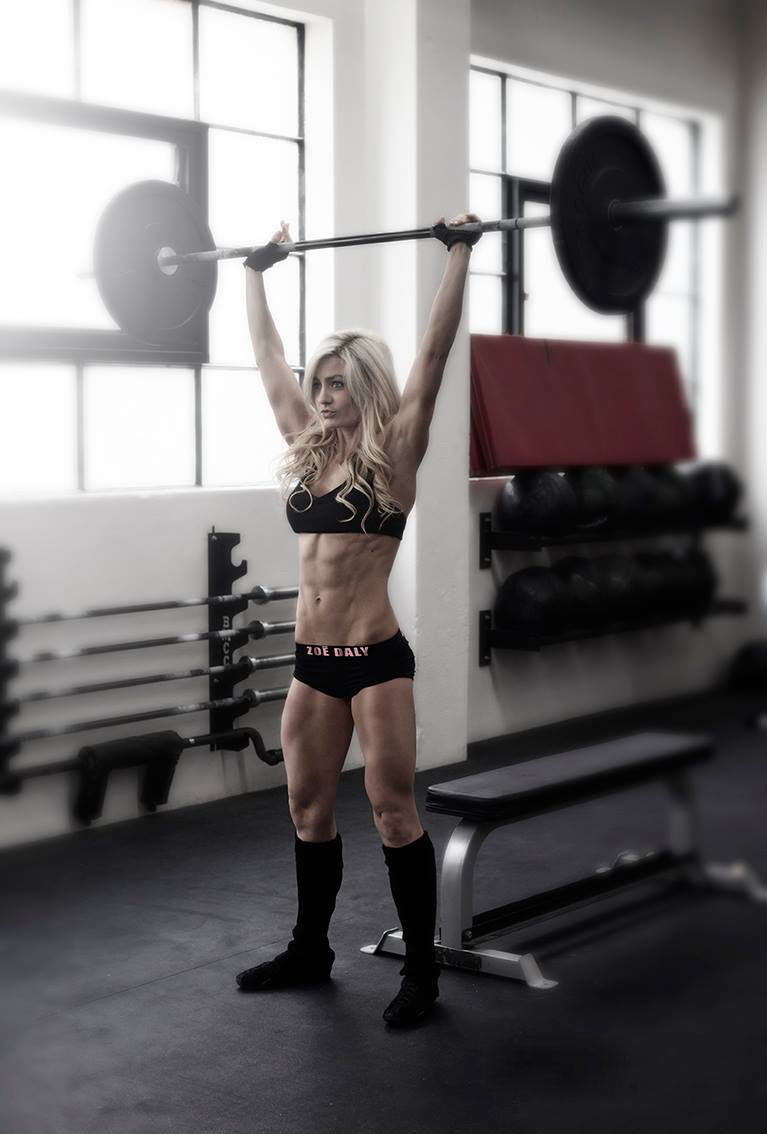 In addition to weight training, Zoe also enjoys taking part in pilates and yoga to supplement her weight training workouts. This enables her to consistently improve her flexibility, which in turn allows her to lift heavier weights as she progresses.

Zoe’s favorite exercises that she performs in her workouts are dumbbell tricep extensions, pull-ups, and deadlifts. She trains on a regular basis in the gym, following a five day training split. Her routine is listed below: 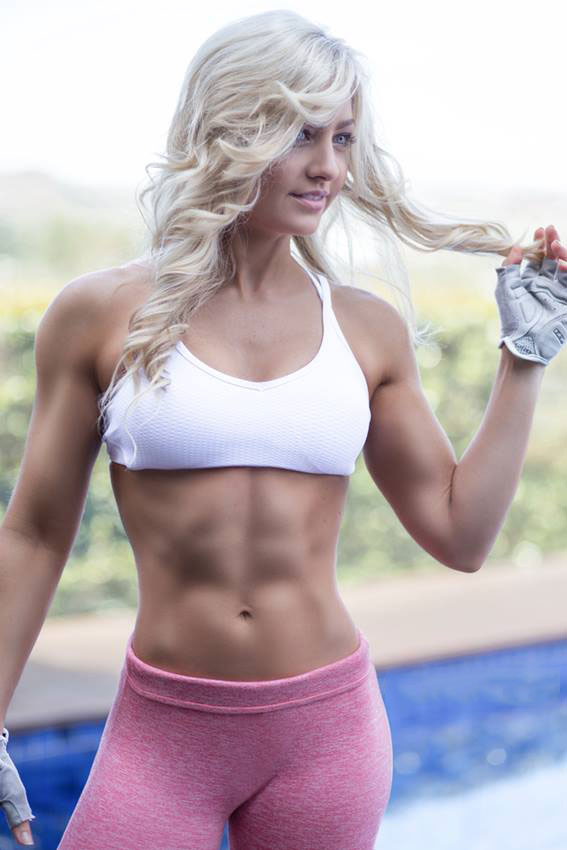 Zoe bases her diet on eating clean foods all year round, as it’s her aim to stay as lean as possible. To ensure that she doesn’t fall of track with her nutrition, she keeps her water intake high, usually drinking up to four liters of water per day.

Zoe has a preference of eating protein with every meal to quickly recover from her workouts, which also helps her to remain satisfied. In turn, this helps Zoe reach her macronutrient needs on a daily basis. Here’s Zoe talking about her nutritional choices:

“I am lean all year round and enjoy a diet rich with wholefoods, I never eat anything processed and I don’t do “dirty cheats”. Since I started enjoying a macro-balanced diet in 2013, I no longer crave anything unhealthy”.

Zoe’s common food choices along with a healthy meal recipe are listed below: 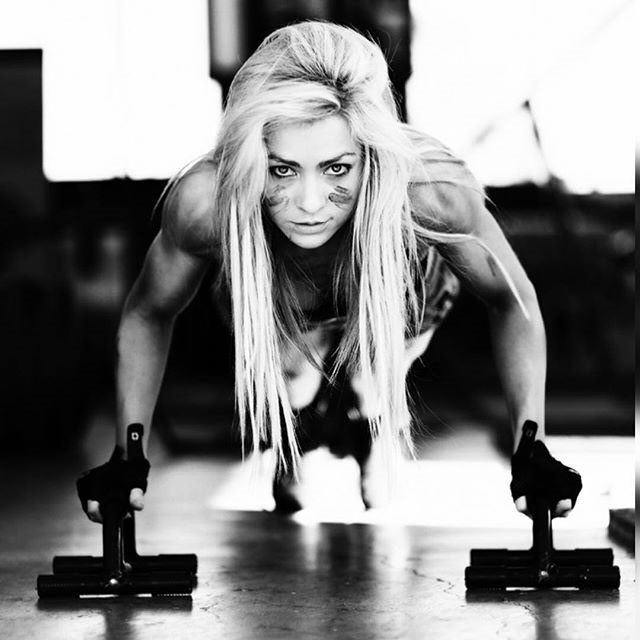 Zoe takes influence from the likes of Jamie Eason, Andreia Brazier, Jennifer Nicole Lee. Because of their phenomenal physiques, they have soared to fame across their social media pages.

However, Zoe’s parents and older brother have kept her pushing forward throughout her entire life. Thanks to their inspiration, she soon began to be her own source of motivation. Here’s Zoe talking about the self motivation she has acquired:

“I am my own motivation, every day I aspire to be better that I was yesterday. I have come too far, been through too much, dodged too many curveballs, to ever give up, or get complacent in life”. 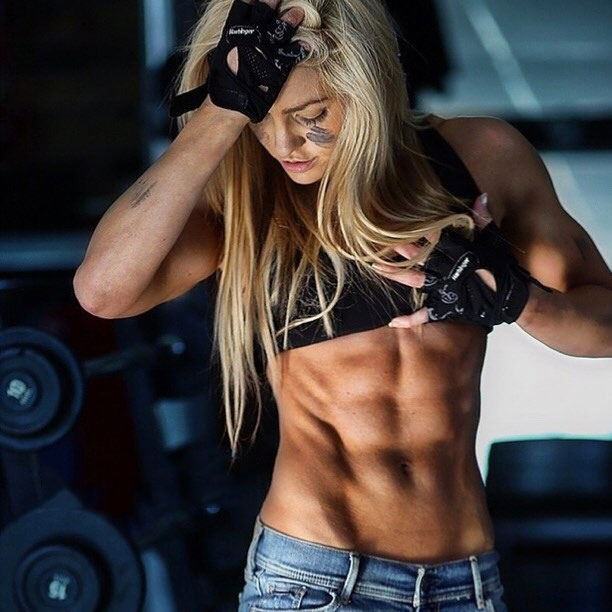 What we can learn from Zoe Daly

Zoe Daly established a passion for fitness during her childhood, starting out by taking part in competitive sports such as baseball and athletics. Ever since she was a young girl, she has taken inspiration from her parents and older brother.

What we can learn from Zoe Daly is; the success within her fitness career is all down to her commitment, consistency, and desire to build a great physique. By following a mindset similar to Zoe, you will be on the right track to achieve greatness of your own.