However, as she became more social in her early 20’s, she started drinking regularly – where she started making poor choices for her health.

This eventually lead her to gain weight, and slowly, Tasha felt the negative effects of living an unhealthy lifestyle. Deciding to turn things around, she hired a personal trainer when she was 26. This is when she fell in love with bodybuilding, and the fitness lifestyle.

Since then, she’s go one to become a well-known figurehead in the modeling and bikini world. Tasha now boasts a huge amount of followers online –  who look to her for support and guidance on their own fitness journeys. 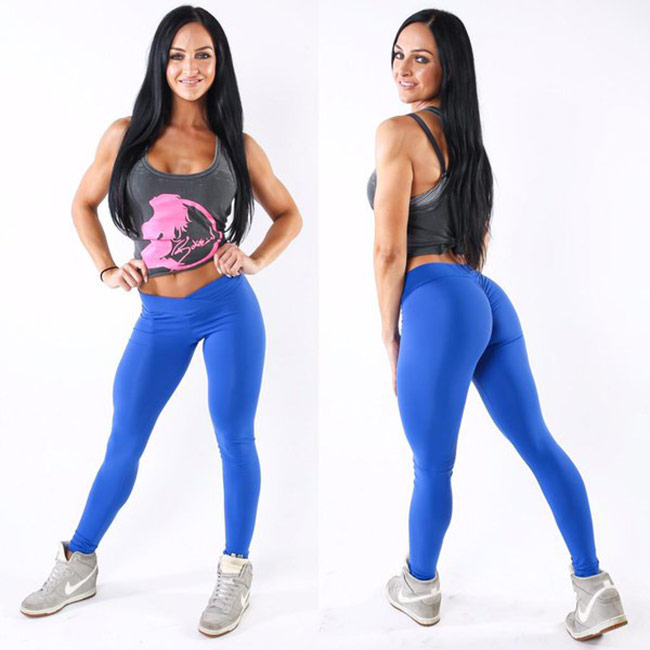 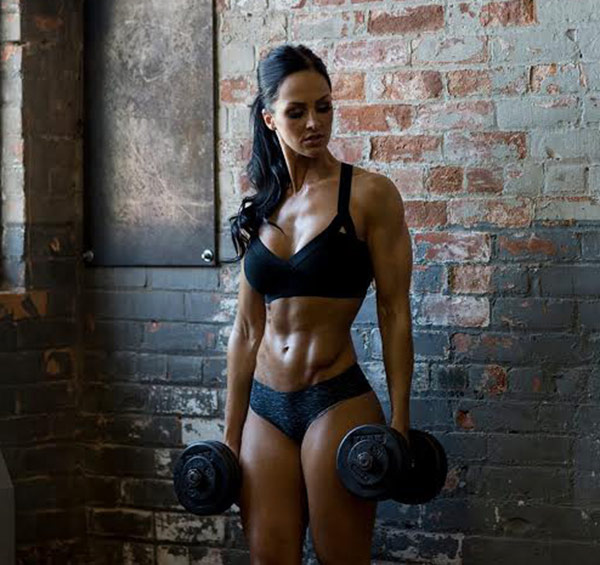 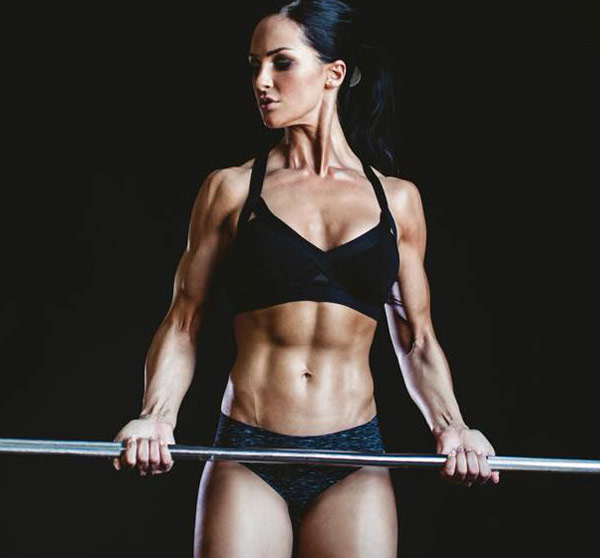 “The disappointment of losing should push me to improve instead of discourage me.”

Born in Toronto Canada, in 1985, Tasha Star was always active growing up. As Tasha said; “especially since I was involved in high level competitive equestrian showjumping.” However, as she became more social when she became older, Tasha started drinking.

This led to her eating out more, along with creating unhealthy habits. Tasha noticed her body was quickly changing, and for the worse – she decided to make a change.

Deciding to get back into shape, as Tasha didn’t like the direction she was going, she started a one months training program with a friend at the age of 26 years old.

It was the personal trainer who showed Tasha everything she needed to know about bodybuilding and strength training. As Tasha said, “I fell in love with it.”

As Tasha became more confident with her abilities in the gym, she decided her physique was ready to step on stage in her very first bikini show.

She knew that walking on stage in her bikini in front of 600+ people, would give her the push she needed to get into her best condition possible.

“I decided to get on stage in a tiny bikini in front of 600+ people! That certainly pushed me to the next level as I wanted to present a package that was as good as or even better than the other girls!”

Tasha said the prep for the competition was hard, but she “stayed true” to her body by keeping everything healthy and natural.

Her first fitness bikini competition took place with the Ontario Physique Association – on May the 11th in 2013 Mississauga. By this point, Tasha had been training hard for several years.

After stepping on stage in front of the judges, where she eagerly awaited the announcement of the winners – Tasha received 8th place out of 17 competitors in total.

Tasha said this was not the position she was looking for. She said her tan may have been to light, for the judges to award her a place within the top 5.

However, Tasha’s spirit continued to push her forward. As she said, “it has only pushed me harder to do better in my next competitions.”

Since her first competition, Tasha has taken part in several more bikini shows across Canada, such as the Arnold Amateurs. Tasha eventually became successful in her endeavors, where she became nationally qualified after winning overall at Ontario in 2015 – along with the nationals.

However, throughout her competitive career, Tasha didn’t do as well as she hoped in the long run – she hoped for better results.

Not letting her set-backs hold her down, Tasha continues to look towards other competitions, such as the Arnold Classic in the hope to make top position one day.

“I am in the best shape I have ever been! I feel great in terms of health and confidence and it feels awesome! Aside from the physical benefits, I have received a lot of attention and recognition from other fitness professionals, as well as encouragement to continue in the industry.” 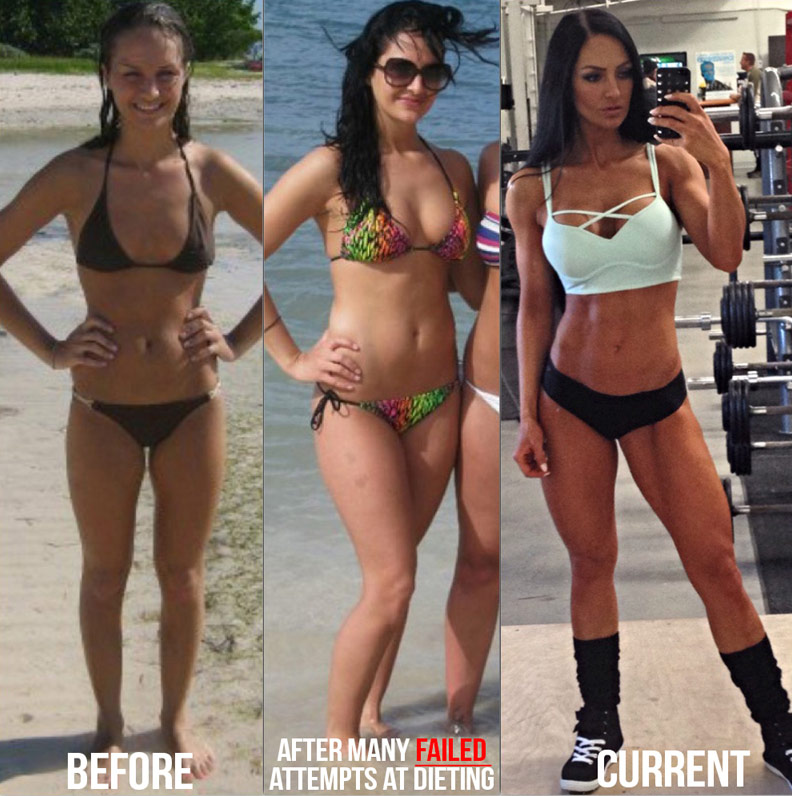 Tasha Star before and after.

After all of Tasha’s ups and downs during the years she’s been competing, she’s stayed strong and moved forward, by making the best of every situation. For people who are struggling with the same difficulties in life, Tasha advises;

“Don’t underestimate what you are capable of in and outside of the gym. All too often I hear people are too busy or they can’t find time to work out or do meal prep. I work 3 jobs and still manage to prep all of my meals and train 5 days a week (2 hours a day), so it is possible!

Also, when you are working out, always push yourself beyond what you think you can do because trust me, you can probably do more! It’s called working out for a reason… Finally, never give up. There is always a way to achieve your goals!” – Tasha Star 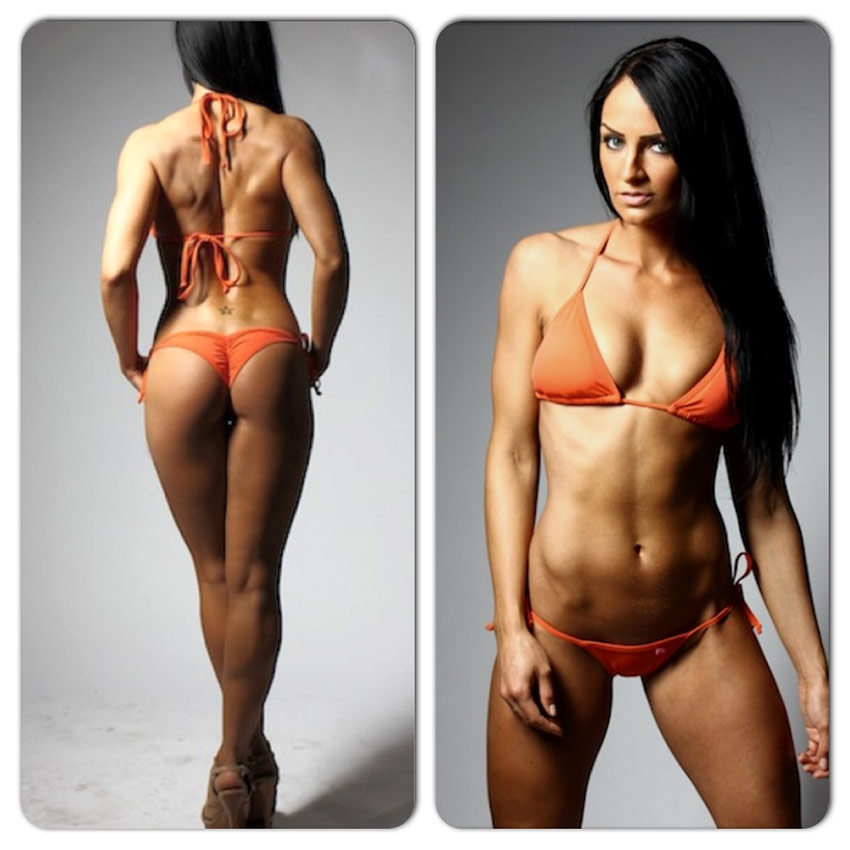 “Learn the basic of nutrition and training by understanding how the body works.”

For getting lean and feeling strong, Tasha prefers HIIT over slow and steady state cardio. As Tasha says, “It’s short and sweet and super intense, and when done correctly, it has been the most effective for long term fat loss.”

Tasha likes to train legs 3-4 days a week, while adding in heavy compound lifts to increase her overall size and strength. For most of her exercises, including legs, she’ll stick to a 8-20 rep-range.

As Tasha says, “My upper body grows exceptionally fast so I am restricted in what I can do for training as a bikini competitor. I have a day with an upper body circuit where I hit every muscle group and then two days of shoulders only.”

When she’s getting in top shape, Tasha will vary her workouts and include “periodization or phases to encourage maximum response.” 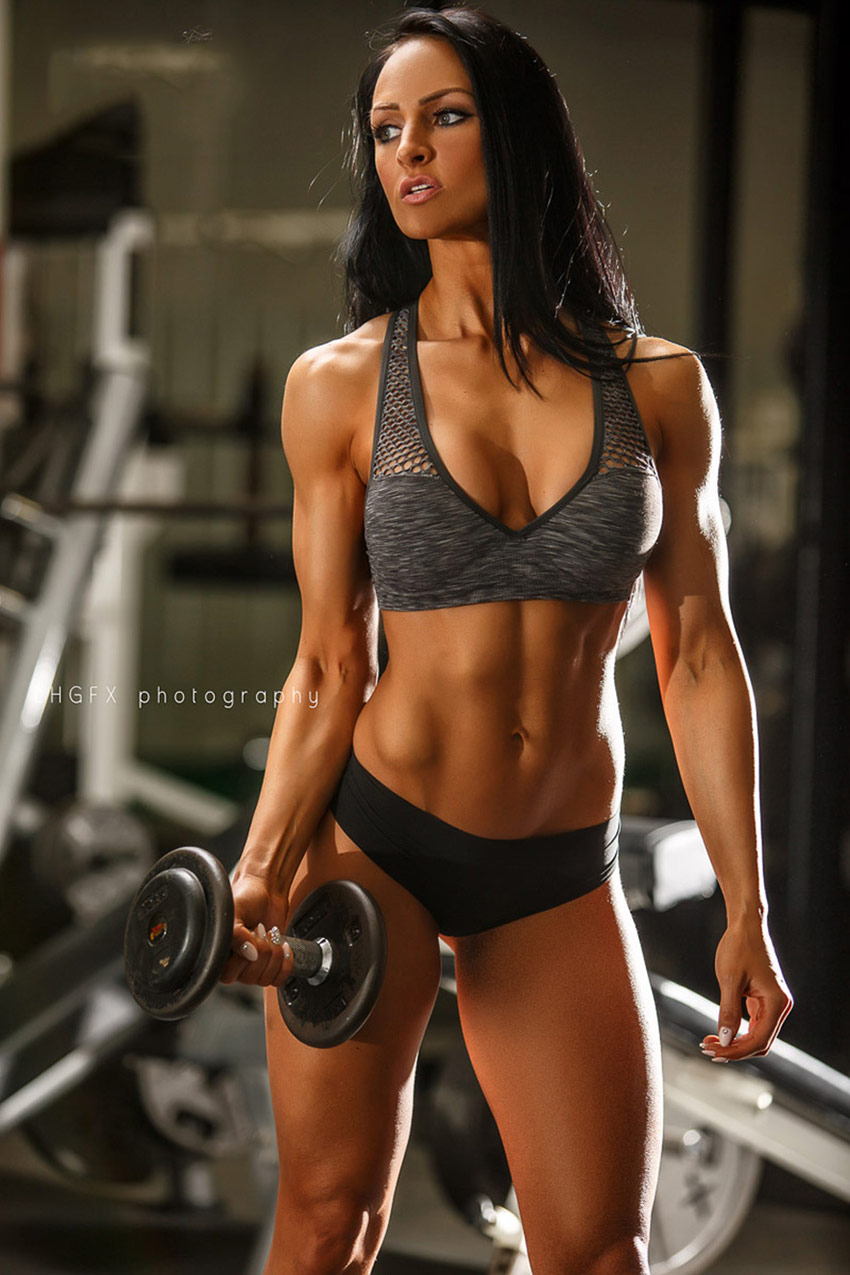 “I not only love being competitive and successful, but I love helping others do the same. I have a genuine passion for this industry. It really doesn’t feel like work. I am always looking ahead and setting new goals so I am always working on something I’m excited about.”

Tasha likes to follow the flexible dieting approach, which allows her to eat her favorite foods. This also helps her to avoid food cravings.

As Tasha says, “I’m less likely to binge because I know I can occasionally fit in a treat if I want to. It’s a method that works well for me because I do enjoy a variety of foods and treats from time to time and this allows me to do so without feeling guilty or that I’ve restricted my progress!”

Tasha has also said that some people use flexible dieting approach it in the wrong way, eating “pop tarts all day.” But for Tasha, she’ll eat clean 90% of the time. She’ll sometimes leave space for a treat when she feels like it – as long as she’s hitting her macros, she can choose whichever food sources she likes.

One of Tasha’s favorite meals is overnight oats, as it’s a quick breakfast. Tasha says the night before she’ll “combine 1/2c oats, 1 scoop whey, 1tbsp chia seeds and then I like to add some banana and dark chocolate chips.”

She also says it’s important to add in enough water to allow the oats to soak up the liquid. Then, once prepared, she adds it to the fridge. Tasha says, “Its like a delicious cool oat pudding and requires little prep, and I can grab and go in the AM!”

Being a natural competitor, Tasha has to make sure she looks after her body all year round. She does this by giving it the necessary nutrients it needs to keep up with her intense training sessions. Tasha will usually take vitamins, BCAA’s, a whey protein, pre-workout, CLA, and a green super-food supplement to help her overall health. 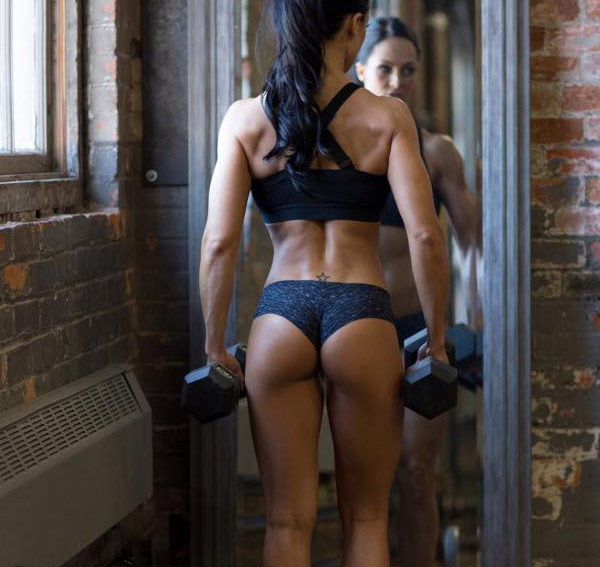 Tasha says that, “since day 1 I have been a huge Amanda Latona fan. I love how she has a great balance of strong and feminine. She has such wonderful mature muscle mass, and those glutes are to die for!”

She also says that Amanda is a “super sweet and genuine in person”. Tasha goes onto say that she admires any woman who makes their own presence known in the fitness industry. As Tasha says; “It takes a lot of hard work and dedication, and there are so many inspirational women out there, so they all deserve credit and respect!” 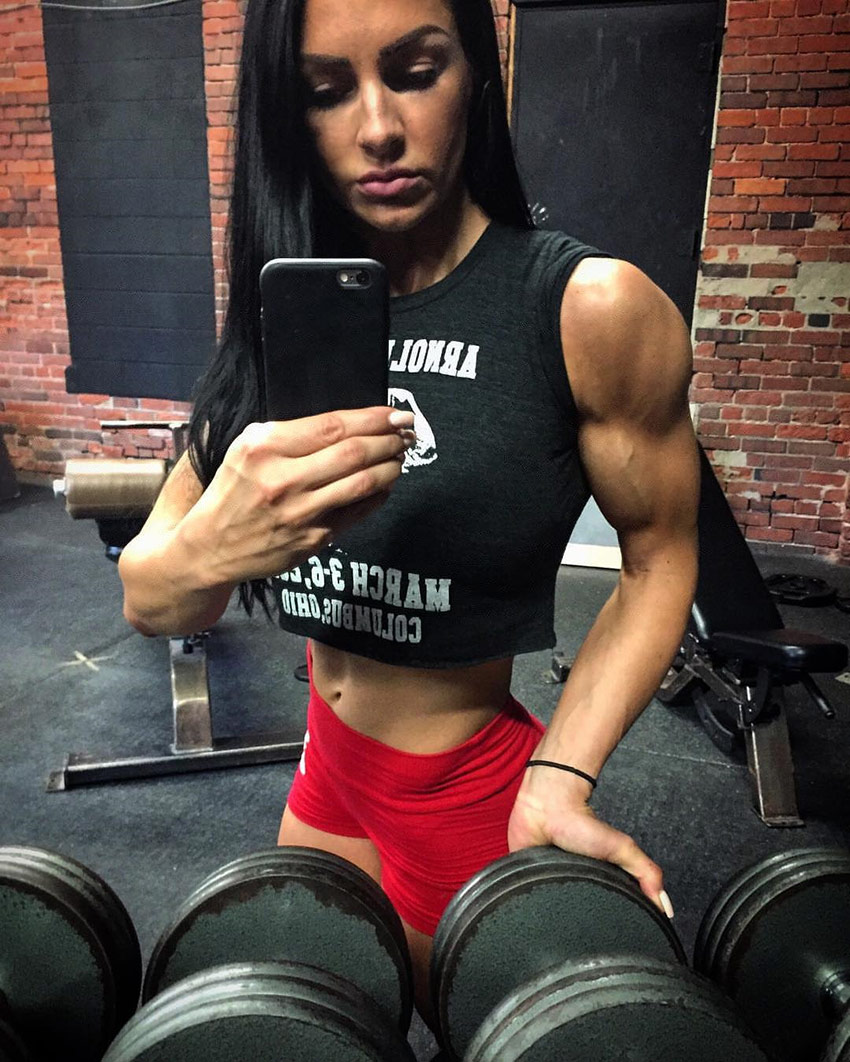 “Nothing is ever enough for me. Yes I’m happy with everything I’ve accomplished to this point, but I know I am capable of more and I will keep working hard to reach new goals!”

What we can learn from Tasha Star

Tasha Star was always interested in sports throughout her youth, and into her late teens. However, after seeing her life was heading in a direction she didn’t like, she hired a personal trainer and set to work.

After “falling in love” with health and bodybuilding, Tasha went on to become a Pro competitor in the fitness modelling world.

However, Tasha’s competitive life hasn’t always gone smoothly, she often placed in lower positions, and failed to make the top 5 on stage.

Undeterred, Tasha set about turning all of her negative experiences into ‘fuel‘ to do better for the next time around. When asked for advise for anyone looking to achieve their golas in life, Tasha says;

“Educate yourself. Unfortunately there is a lot of misinformation out there. Learn the basics of nutrition and training by understanding how the body works. Follow experts and read their different approaches, and decide what fits you the best. Finally, hire a trainer you trust and has lots of knowledge, experience, and client results that show their methods work.”

“Setting goals and having good work ethic. You can have high hopes for yourself but bottom line, if you aren’t willing to bust ass you probably won’t accomplish much. You have to have a very intense, focused and confident mind to succeed in this industry.” – Tasha Star