Born in South Carolina in 1990, Katie Miller Kerner is an American bikini competitor and fitness coach. From swimming to lacrosse, competitive sports allowed her personality to really shine through during her high school days. But one day, that all changed.

Katie began to suffer from insecurities about the way she looked, meaning that her life soon commenced on a downward spiral. She began starving herself and went out running regularly. Soon, this had a negative impact on her personal health – leading to her being diagnosed with anorexia.

However, she then met her future husband who guided her on the path to recovery. Ever since then, she found success on the bodybuilding stage – earning IFBB Pro status in 2017 to reach new heights in her fitness journey. 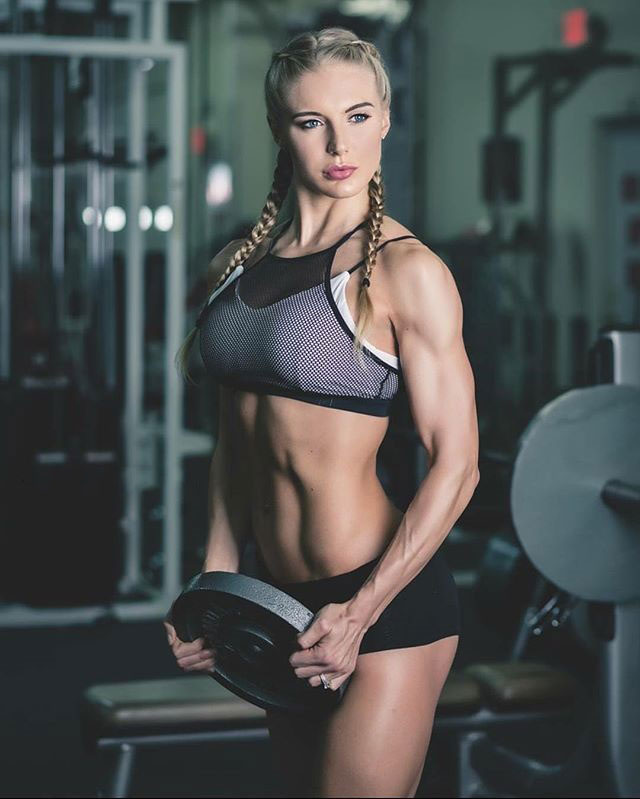 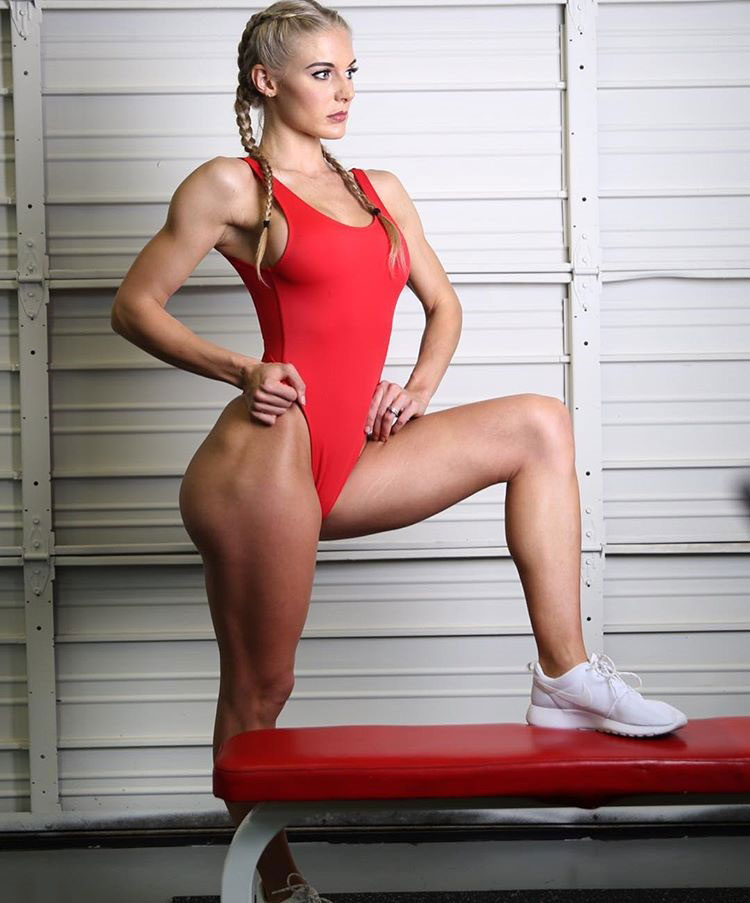 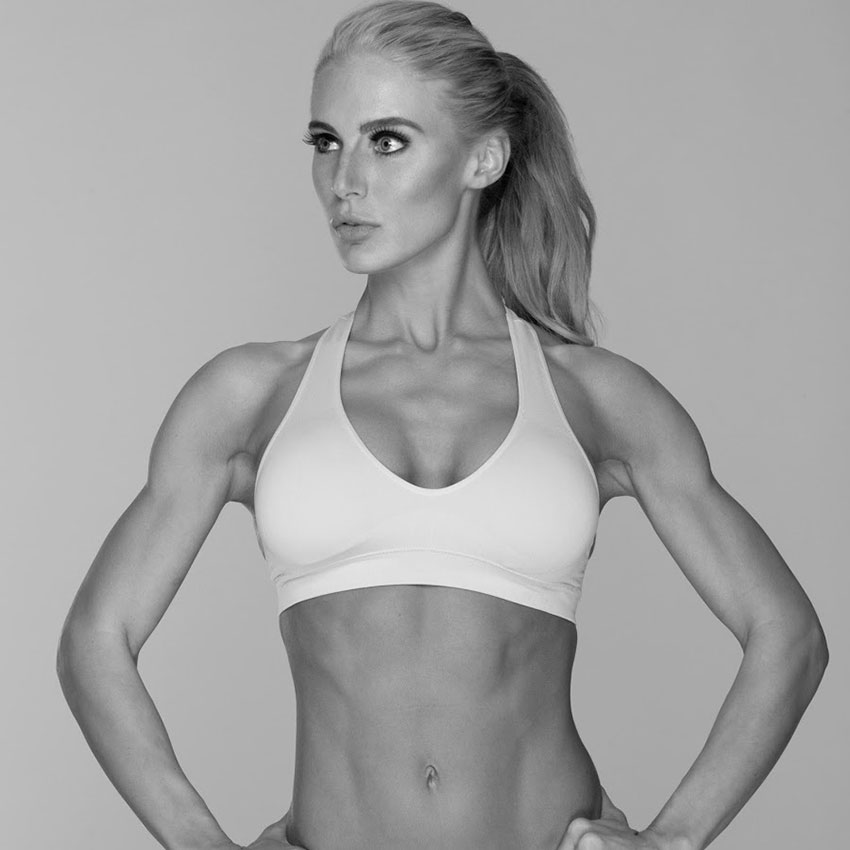 Katie Miller Kerner was born in South Carolina in 1990. However, she spent her childhood between Maryland and Illinois. From her early days in junior school, sport was a huge part of her life – taking part in many competitive sports ranging from swimming to lacrosse.

Her life in school was going great, until one day, things took a turn for the worse. As she approached her senior year of high school, Katie began to suffer from insecurities about her body.

Because of this, Katie decided to lose weight, thinking that this would make her a happier person. It was during this period, Katie began starving herself and going out running on a daily basis. However, all this did was worsen her situation.

As a result, Katie was diagnosed with anorexia. She was left malnourished and feeling weak, meaning that insecurities about the way she looked had finally caught up with her. It was at this point, Katie realized that she needed to make a positive change in her life – she then found bodybuilding.

Katie began training in the gym regularly, quickly turning fitness into one of her greatest passions. From this moment onward, she became determined to emerge victorious in her battle against anorexia.

After making much progress in her training in the gym, Katie knew that she could keep pushing forward to achieve more. It was at this point, her future husband encouraged her to compete on the bodybuilding stage.

From then on, Katie stayed focused on achieving her goal of becoming successful as a bikini competitor. As a result, she could overcome her darkest days to become the best possible version of herself.

Katie entered her first competition, the ABA John Hansen in 2011. She stormed to 1st place overall in the competition, offering her the platform to live her life in a more positive way. 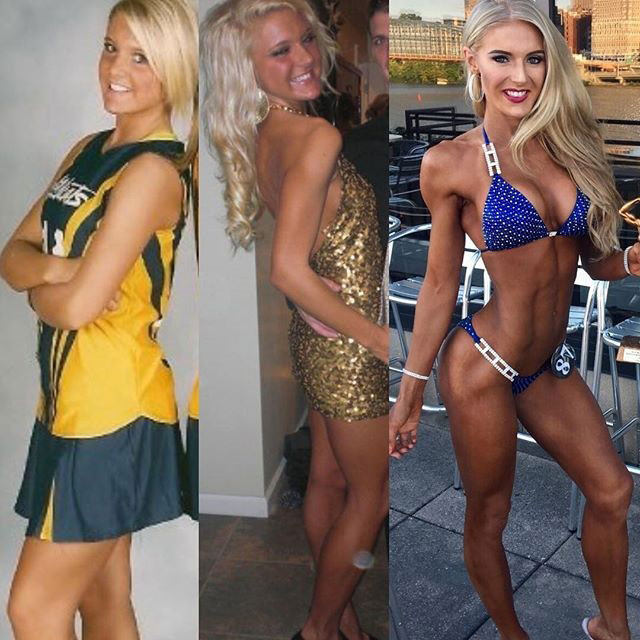 Katie Miller’s transformation: how she looked in school compared to now.

Her hard work and determination really paid off, finishing in 2nd place at the NPC Midwest Naturals in 2013 for instance. Every competition that she appeared in gave her the motivation to move onto her next – striving for continual improvement.

Eventually, Katie set her sights on winning her Pro Card. After a few years of competing in the NPC, she finished in 1st place at the 2017 IFBB North Americans competition – meaning her dreams of becoming a professional bikini competitor had turned into reality.

Ever since starting out competing, Katie formed a positive outlook on life, all thanks to her success on the bodybuilding stage. Here’s Katie recalling the moment she realized that becoming a bikini competitor was exactly what she needed:

“Competing helped me realize I was capable and strong. I proved to myself I could put my mind to something and accomplish it”.

Fitness allowed Katie to completely turn her life around, and she embraced the chance. Because of this, Katie was able to reach every goal that she set for herself. From then on, she made it her goal to help others follow in her footsteps – becoming a personal trainer allowed her to achieve this.

Here’s Katie talking about her reason for becoming a personal trainer:

“The reason I am a personal trainer is because I want to show women that being healthy will not only make you look and feel better but it can do amazing things to your self confidence”. 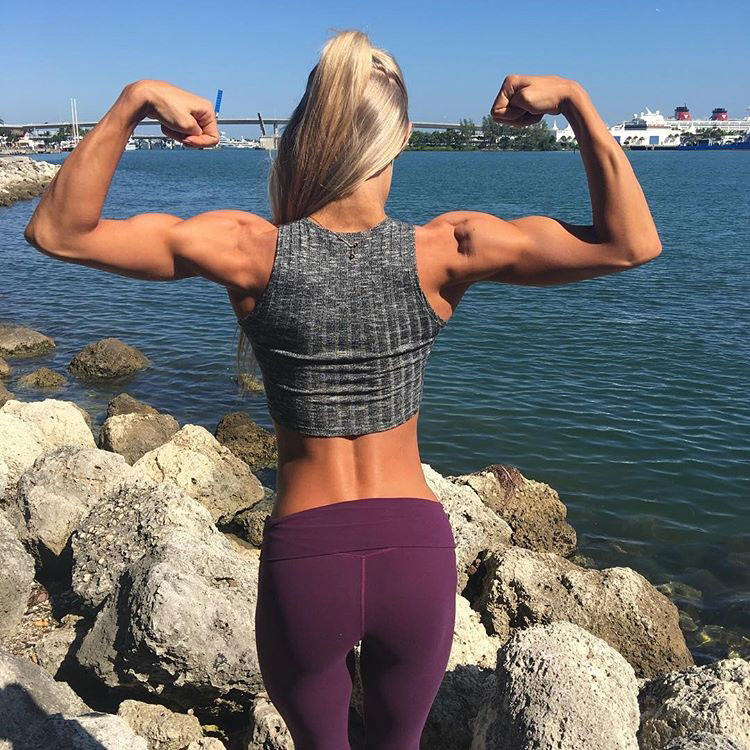 Katie’s preparations for competitions means that she has to be strict when it comes to training. She trains regularly, often 5 – 6 times per week to reach her fitness goals. This allows her to stay in peak condition, regardless of the time of year. 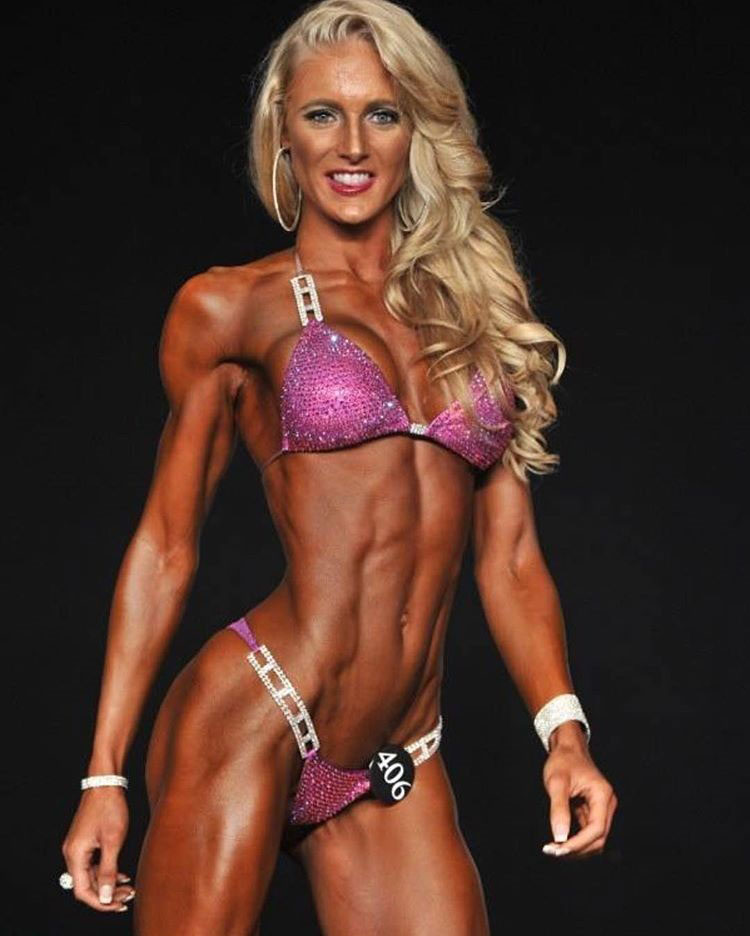 During her off season, Katie focuses her diet on eating a high amount of carbohydrates. By doing this, she is able to fuel her workouts and obtain maximum results in the process.

In addition, Katie eats lean proteins and healthy fats so she’s able to recover quickly from her intense workouts. In preparation for competitions, Katie cuts her carbohydrates to find a balance alongside her fat and protein intake.

Here’s a meal plan that she follows to prepare for a competition: 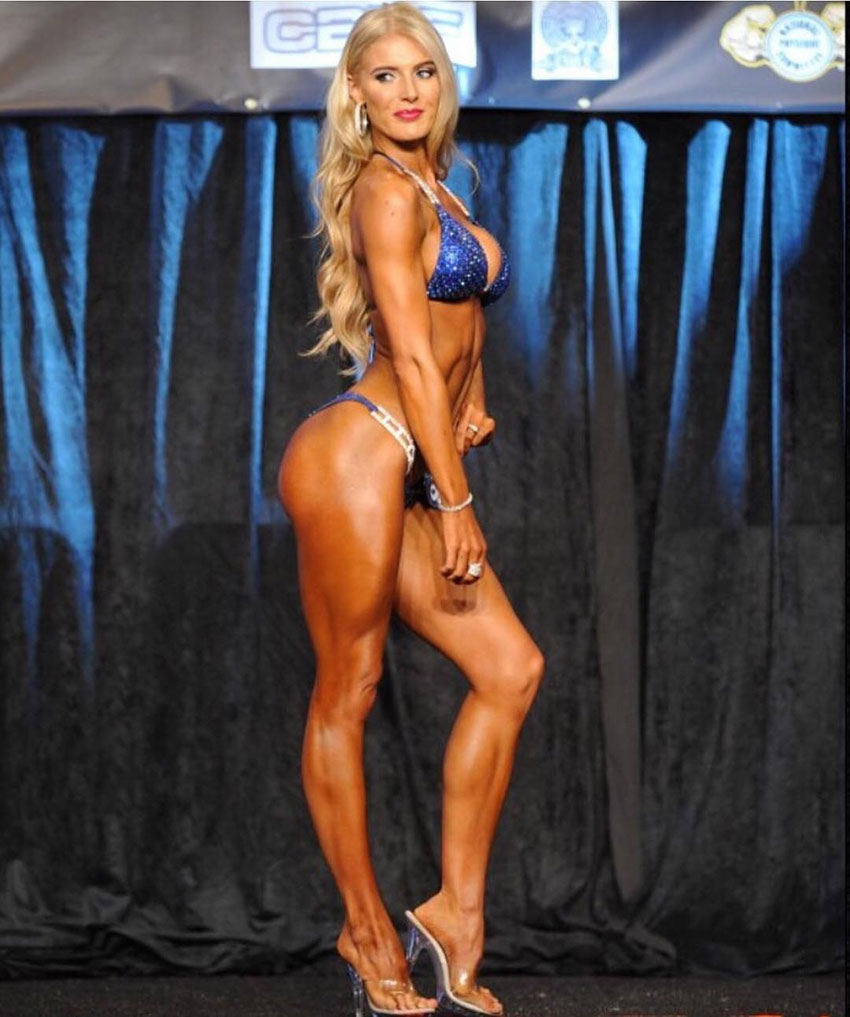 In her darkest days, Katie lacked the confidence that was needed to feel happy about her body. As a result, she suffered from low self-esteem, and at her lowest point was diagnosed with anorexia.

However, her husband was the one person who helped her through her recovery. He made Katie realize her potential in fitness, allowing her to become a successful bikini competitor. In regard to his influence, Katie stated:

“He helped me with my confidence, he loved me unconditionally, he helped me see I was beautiful, and he encouraged me. He helped me realize I was worthy”. 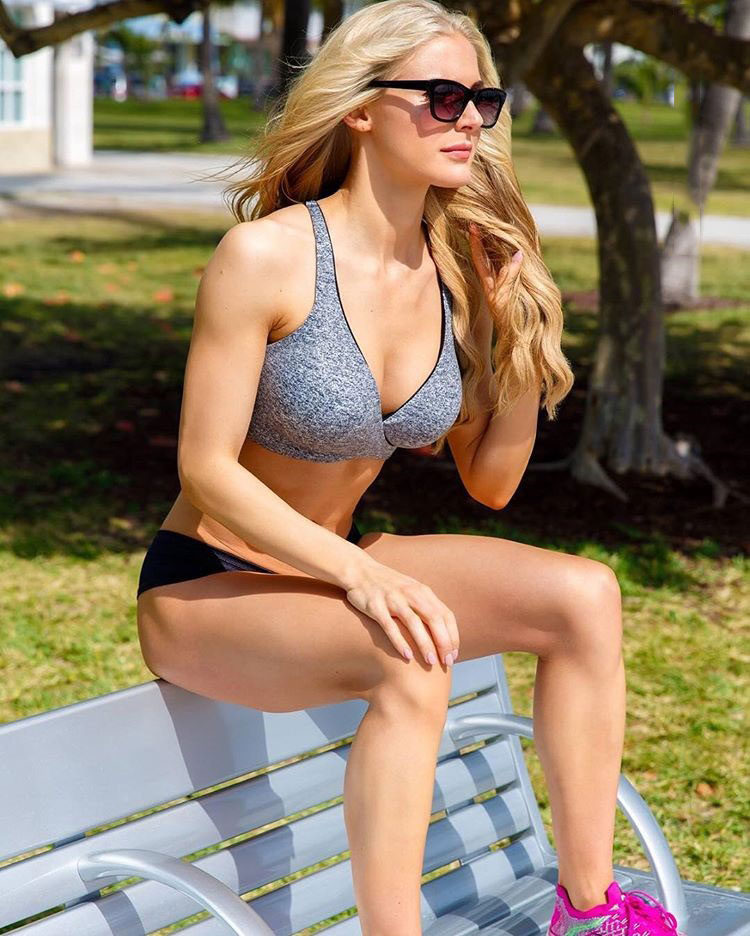 What we can learn from Katie Miller Kerner

Katie Miller Kerner’s life began to tumble downhill when insecurities about the way she looked got the better of her. She was left tired, weak, and malnourished – meaning that she quickly hit rock bottom.

But then one day, she realized her need for change. She then discovered bodybuilding, quickly becoming one of her greatest passions. From then on, she set her sights on becoming a success on the bodybuilding stage – just months later, she achieved just that.

What we can learn from Katie Miller Kerner is; despite reaching breaking point, she didn’t let this stop her from living her life in a more positive way. As a result, she not only became a success as a bikini competitor, but also an inspiration to many people across the world.