Jazmine Garcia is a fitness influencer and V-Blogger from the United States of America. While she leads an awesome lifestyle nowadays, Jazmine’s life prior to fitness was full of ups and downs.

During her last year of high school, Jazmine came face to face with a terrible tragedy – the death of her mother. Devastated by her loss, she went into a spiral of negativity, depression, and eating disorders. Her health quickly deteriorated, and she became a shadow of her former self.

After a visit to the doctor, Jazmine realized that she had to change something immediatelly, or suffer serious health consequences. She mustered up her willpower and decided to start going to the gym – using the weights as an outlet for her negative emotions.

After several months of training, Jazmine slowly regained her stability in life. During the transformation, she started her social media channels, where she shared her fitness journey with others online. Jazmine has inspired a large number of people with her story, and has grown her influence more than she’d ever expected. 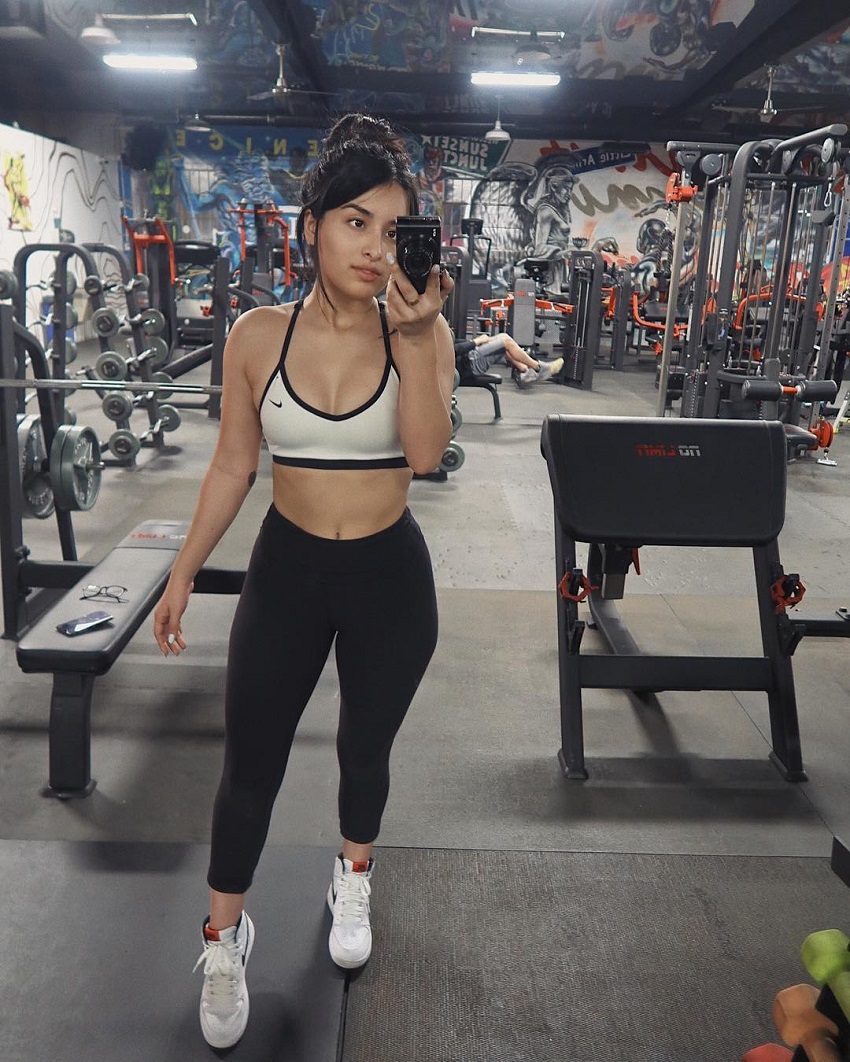 “I don’t think I can put into words how good training makes me feel. Having that endorphin release during a workout is probably one of my favorite feelings in the world.” 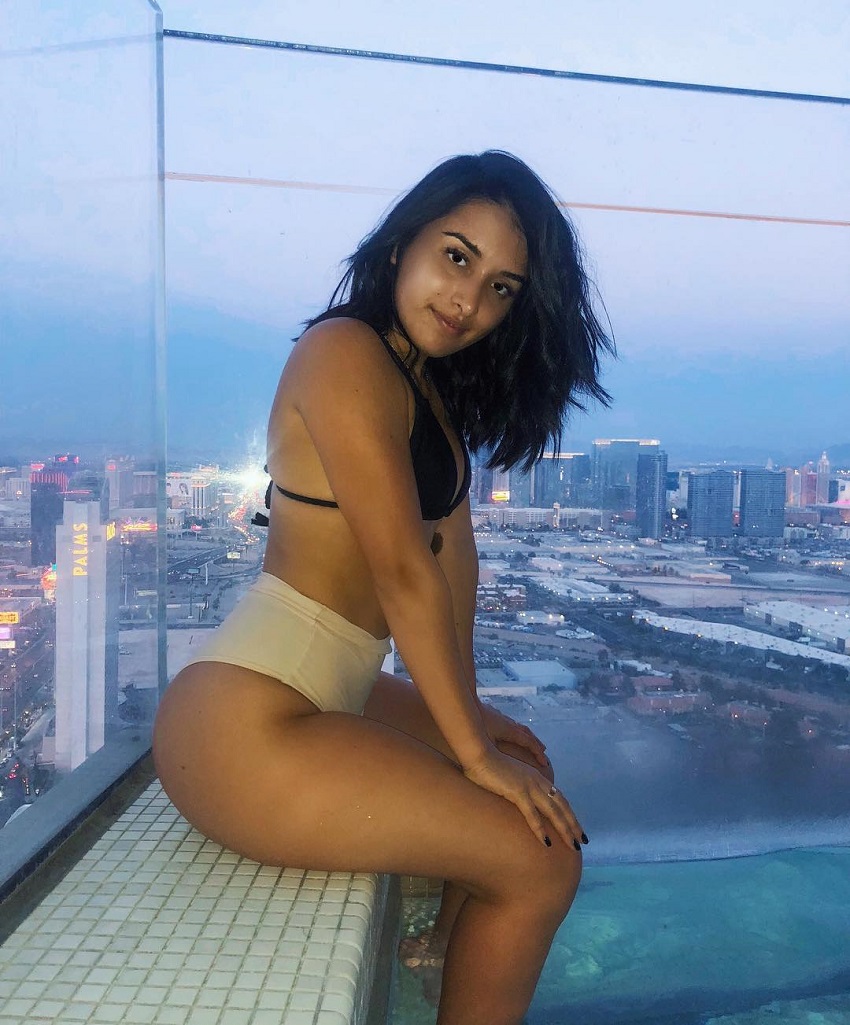 “Training with weights means a lot to me. You know, it’s been something I turned to during my darkest times and something that was always there for me. When I go out and lift, I know I’m doing the right thing. I can feel it.” 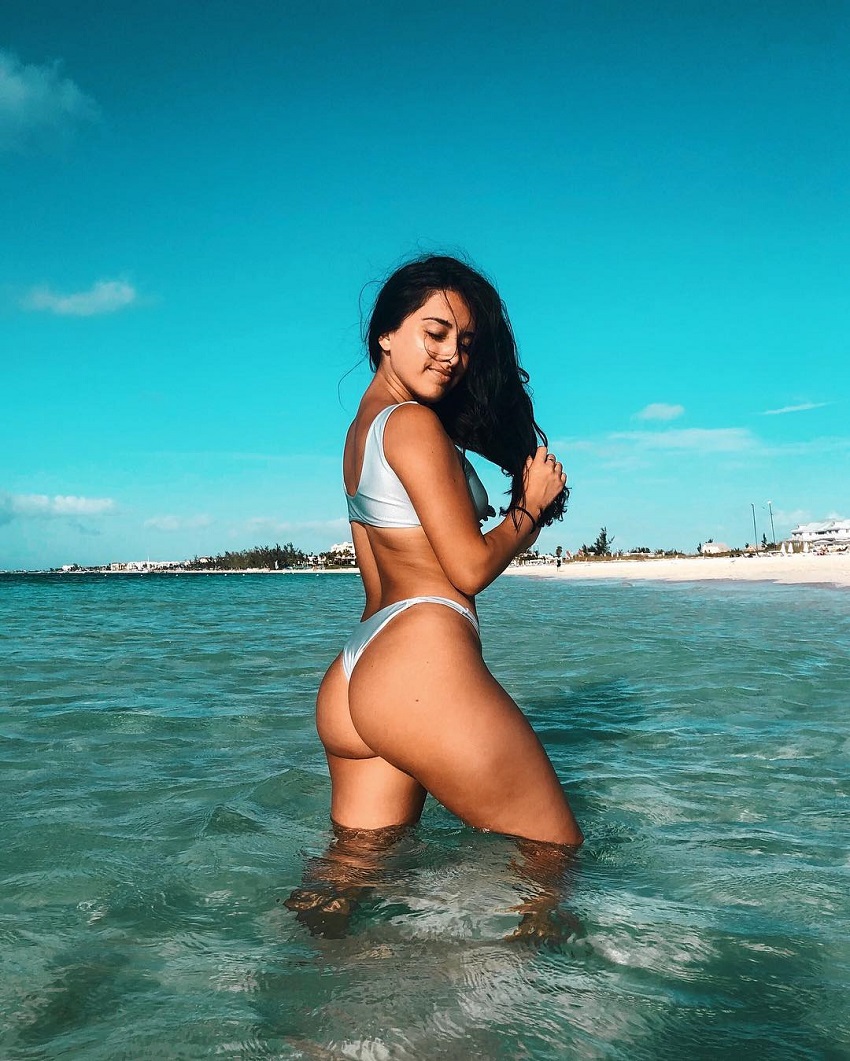 Jazmine Garcia was born and raised in the USA. Her early life was marked with a tragedy. During high school, Jazmine discovered her mother had a colon cancer. After months of long and difficult battle, her mother succumbed to the illness.

Devastated with the news, Jazmine fell into a serious depression, which manifested itself through her eating disorder and other health issues.

“When my mom had passed away, I was just getting ready to graduate high school, and get ready to really set the path for my life.

She was supposed to be a huge part of that. I became severely depressed, I went straight into an eating disorder, dropping from 115lbs to 85lbs. I was straight up in one of the darkest places that I’ve ever been.”

Over the course of the next several months, Jazmine’s health deteriorated. She was not only in a dark place mentally but also physically.

However, it wasn’t until Jazmine went for a check-up at the doctor that she realized just how unhealthy she was.

The doctor informed her that if she kept going her path, she’d suffer serious health consequences – including not being able to have children. This was a wake-up call for Jazmine. She realized the severity of the situation, and that she had to change something immediately. 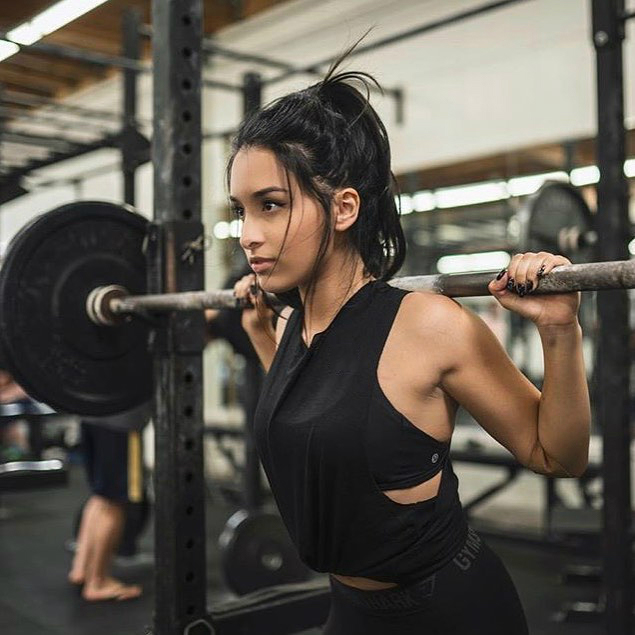 Eventually, Jazmine decided to start going to the gym. She aimed at using the weights as her way of venting her negative emotions.

After several months of training, her health began improving. Gradually, Jazmine returned back to her old weight – reaching a healthy and lean 110lbs. She also began to feel much better emotionally.

Jazmine soon started posting videos of her transformation online, in order to document her journey.

Unexpectedly, she began to draw the attention of a large number of people online. They were inspired by her videos and started sharing them amongst their friends on social media. As a result, Jazmine’s recognition blew up.

Due to a huge support from her fans, Jazmine eventually decided to quit her desk job and turn to fitness as her full-time job.

Within several months, she became a sponsor for renowned sports brands. She also continued to grow in popularity – by 2018, Jazmine had an army of fans following her on the web.

Ever since she started lifting weights, Jazmine has gone from being seriously depressed to becoming a fitness icon and inspiration for others.

Her story shows that life can set huge challenges, but some people come back better and stronger – Jazmine Garcia is undoubtedly one of them. 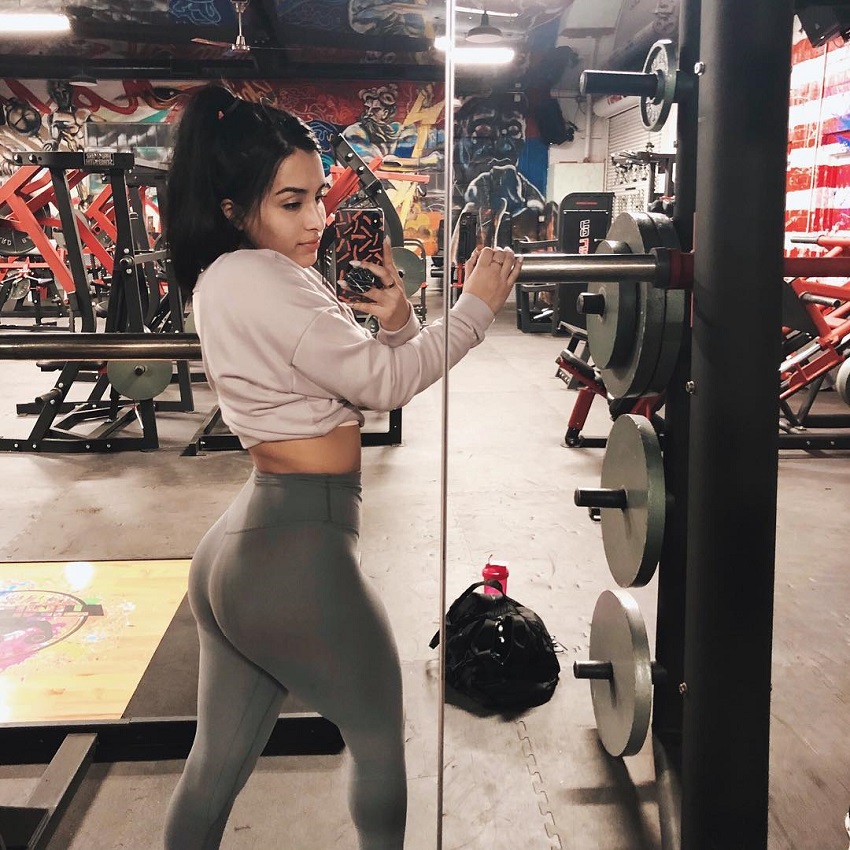 “There’s this weird stigma attached to powerlifting, and I think lifting in general when you’re a girl. People think that you’ll touch the weight one time and become a Hulk. The fact is, it’s really hard to grow. But that’s what’s so empowering about it.”

Jazmine has always enjoyed following a powerlifting approach to training. There’s no exercise that makes her feel as good as when she’s training when heavy, compound lifts.

That said, Jazmine also recognizes the importance of isolation exercises. She adds these movements to her routine in order to develop supporting muscle groups.

Below is an example of Jazmine’s glute workout which incorporates both compound lifts, and isolation movements.

“My booty building workout involves a lot of hypertrophy. It consists of 3-5 sets per exercise, with rep ranges of 10-15 per set. That’s what I believe is best when looking to build muscle.” 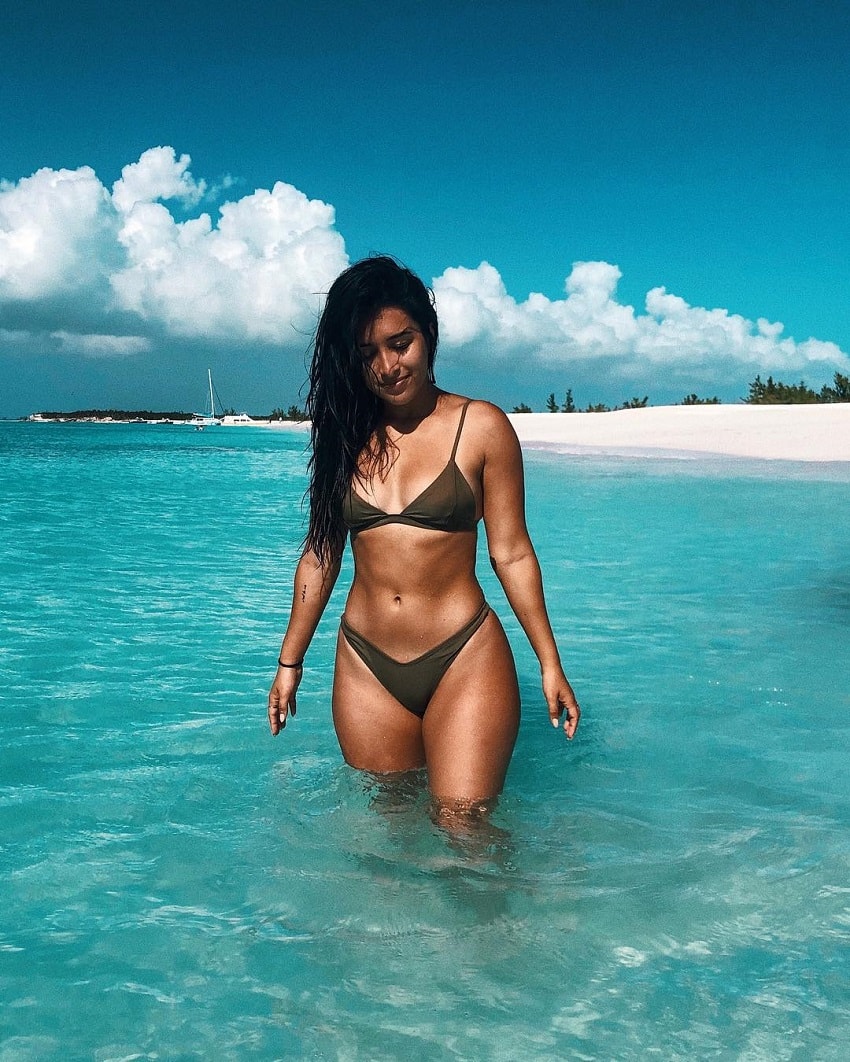 “I’ve had questions as to why I don’t have abs, why I look skinnier rather than lean and muscular. It’s just the way I’m built and the way my training goes. It has been cool to see what I’ve built in the years of serious training. I’m very proud of my physique.”

One of Jazmine’s favorite ways to lose fat is to fast for 16 hours. Meaning, she will only have an 8-hour window where she eats food. 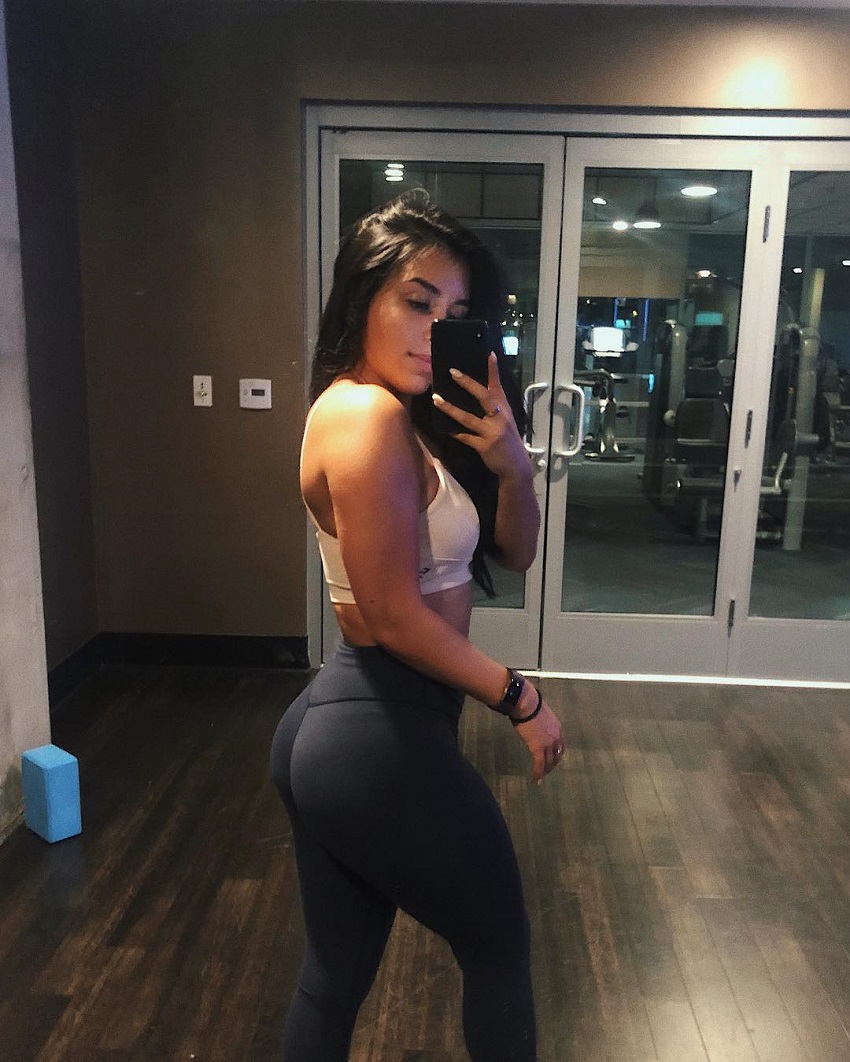 Since Jazmine likes to fast for 16 hours, she can afford to eat caloric foods without gaining excess weight.

This is how her typical meal plan looks: 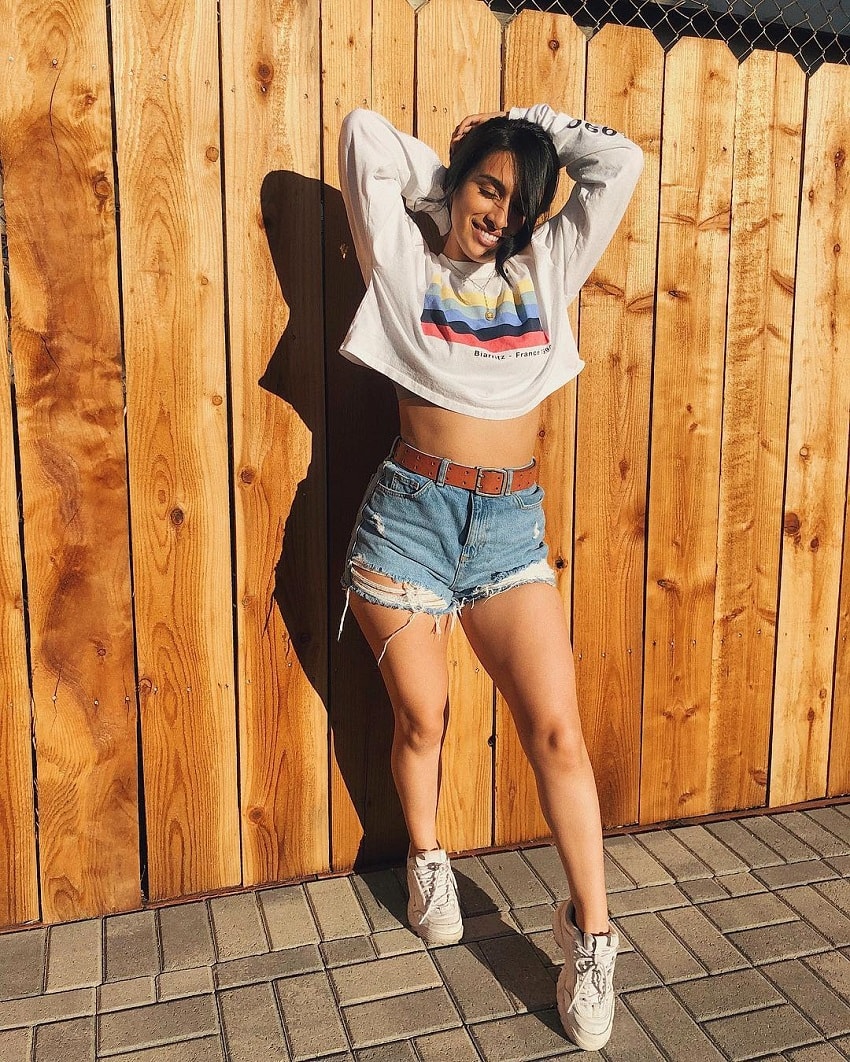 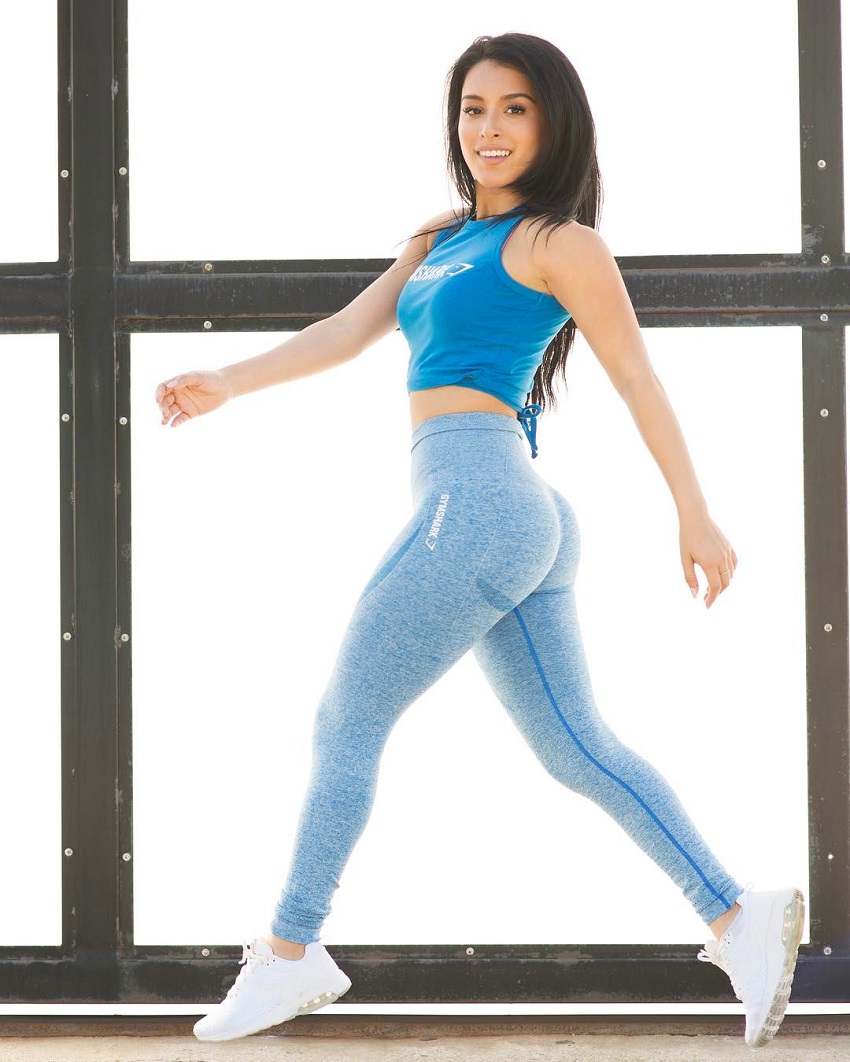 “Love your body all the time please. Do not let other people’s unwanted opinions on your body and goals take you off track. “

What we can learn from Jazmine Garcia

Jazmine Garcia has gone through some very difficult moments in her life. After the death of her mother, she felt completely lost. Jazmine was no longer able to cope with reality.  She became depressed and mentally unwell, along with developing a health-wrecking eating disorder.

However, luckily, Jazmine didn’t let this dark period totally consume her. After she was faced with the wake-up call at the doctor, she realized she’d either change her life for the better, or suffer terrible consequences.

In the end, she chose to push past the tragedy, however difficult that was, and grow as a person. This was a decision that has completely changed her life.

If there’s one lesson to learn from Jazmine, it’s that you too can overcome even the biggest challenges with a strong mindset. No matter what life throws at you, remember to stay strong and keep going forward. With an attitude like Jazmine Garcia, there’s nothing that can prevent you from living a fulfilling life.