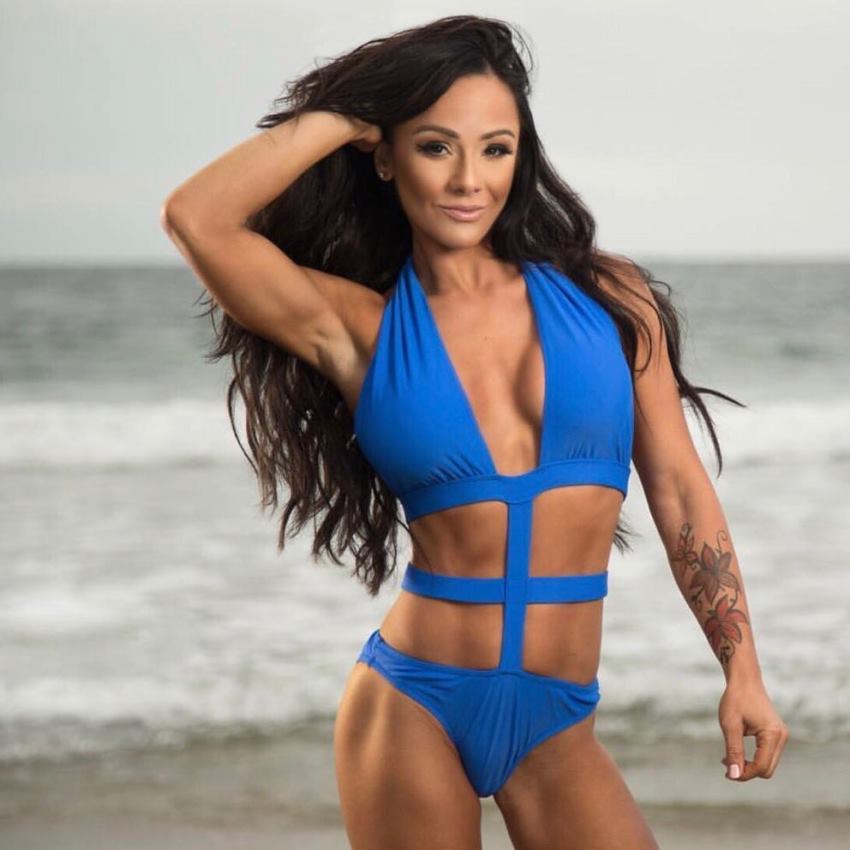 Caryn Nicole Paolini is an IFBB Pro Bikini athlete, certified fitness coach, and nutritionist born in Chicago in 1986. During her early life, Caryn was extremely active and health-conscious. Her parents helped her establish habits such as regular physical exercise, and eating lots of fruits and vegetables.

However, Caryn’s life took a turn for the worse when she enrolled in college. During this period, she developed eating and body image disorders, and her weight began fluctuating drastically. For the next several years, Caryn fought a back-and-forth battle against her eating disorders, without much success.

Then, in the spring of 2012, Caryn was introduced to fitness and bikini competitions. Without giving it much thought, she began training with weights, as well as following a planned diet regimen.

Caryn hasn’t looked back since – she’s gone on to beat her body image and health disorders, in addition to becoming a professional bikini athlete and online fitness influence. 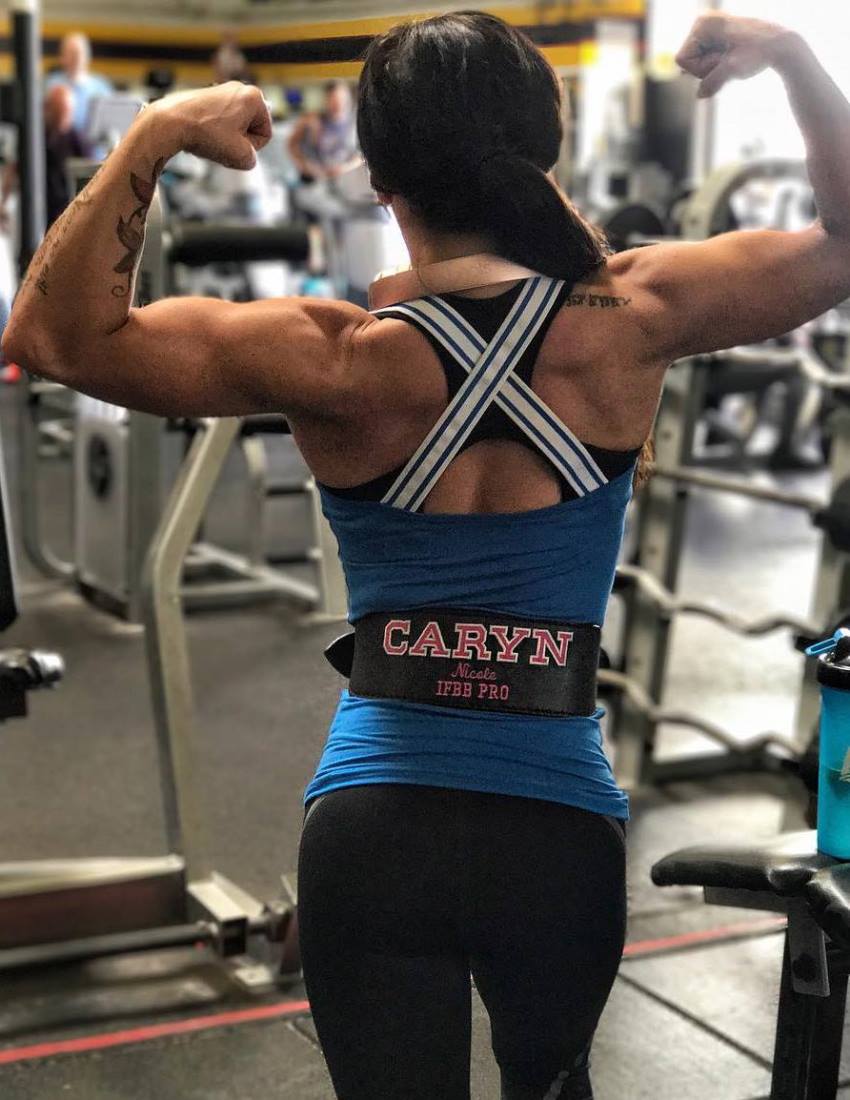 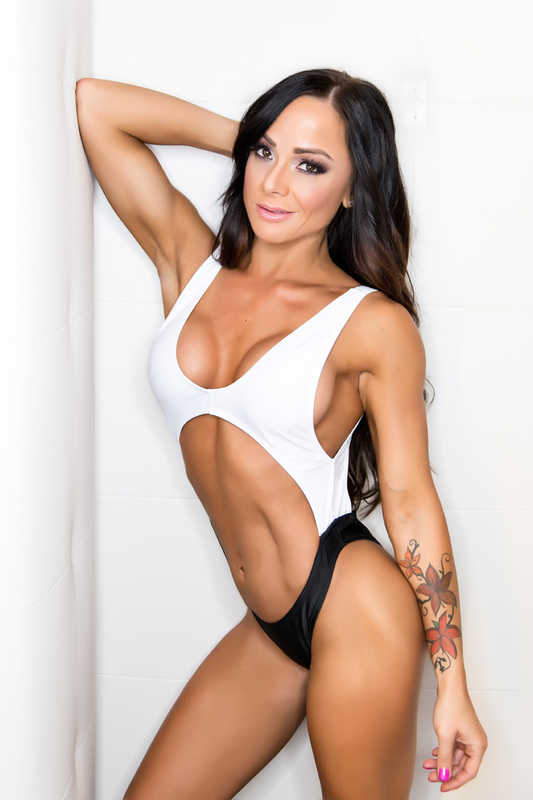 “Fitness is more than a number on the scale or a waist measurement. It’s about being your happiest, most confident self, creating the life you’ve always wanted to create, waking up and saying I am in control, I am powerful, I am strong, and I am worthy of all the things my heart desires.” 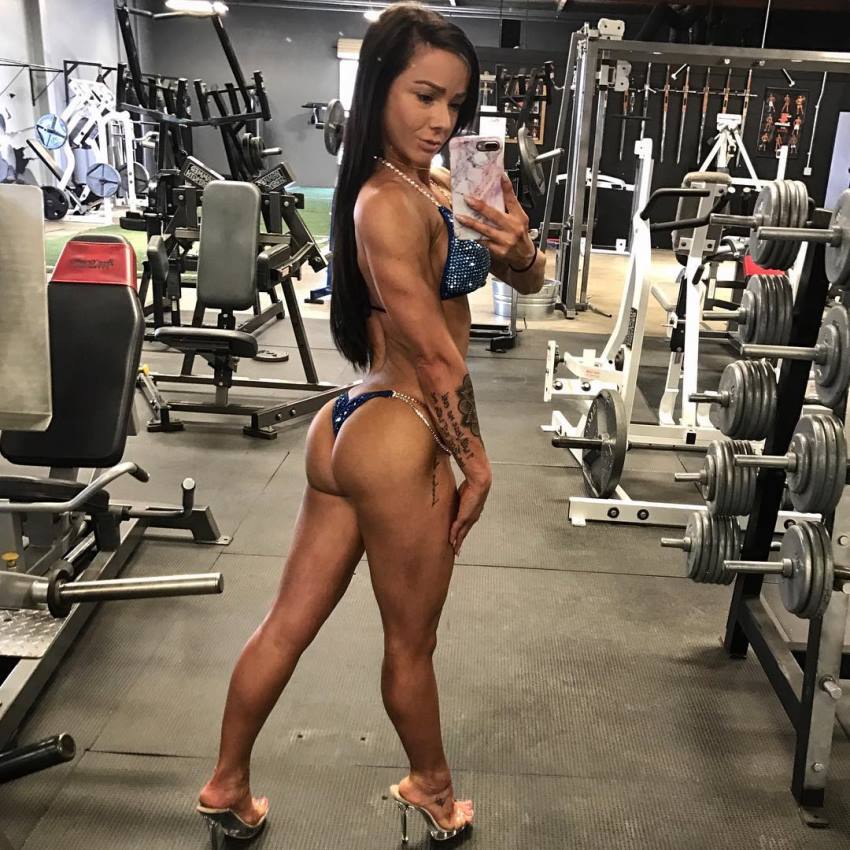 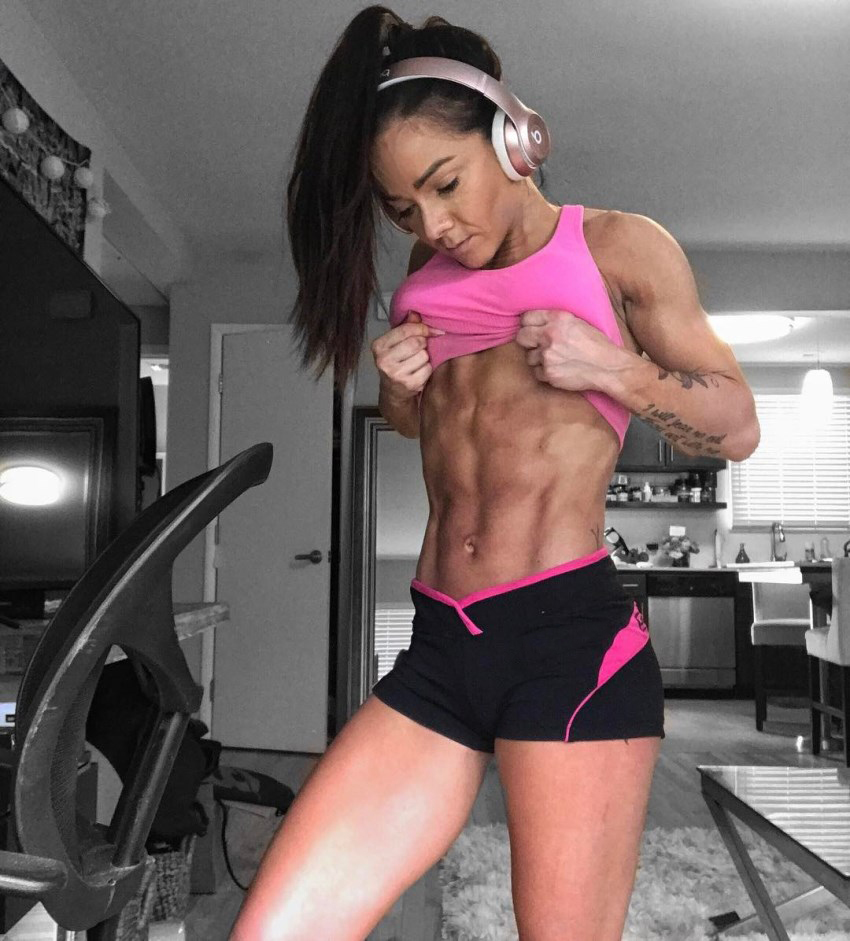 “In the fitness industry and especially with competing, most of what you see is sparkly bikinis, perfect tans, photos of people looking shredded and vascular in the gym. But what you don’t see as often is what that person is going through mentally and emotionally.”

Born in 1986 in The Windy City of Chicago, Caryn Nicole Paolini was a highly energetic child. Her parents instilled qualities such as regular exercise and healthy eating from an early age.

Caryn loved to run around, play sports, and do gymnastics growing up. However, when it came to eating healthy foods, it was somewhat of a challenge for Caryn. Her parents put foods such as carrots, apples, and other healthy fruits and vegetables in her lunchbox in an attempt to teach her the importance of eating healthy.

Caryn said; “As a kid, my parents instilled in me the importance of healthy eating habits. I was the kid in the lunchroom nobody wanted to trade snacks with because my lunchbox was stocked with carrot sticks, apple slices, and bran muffins. I hated it at the time, but I’m grateful now.”

But it wasn’t until college, when Caryn truly began to grasp just how important a healthy was.

In college, Caryn started to realize the impact diet had on her health. Around this time, she began to struggle with her food choices.

Caryn’s weight started fluctuating, as she says “from flattering highs to unhealthy lows.” After gaining some weight, Caryn would go on an extremely strict and unhealthy diet regimen, which would then drop her weight dangerously low.

But this was only a part of a bigger problem Caryn developed, were her eating and body image became disorders. By changing her diet so often, Caryn gradually developed these disorders which caused her to look, and feel unhappy.

“I enjoyed working out, but never understood the importance of nutrition to maintain a healthy lifestyle. In college, I struggled to maintain healthy eating habits, which caused my weight to seesaw for years.” 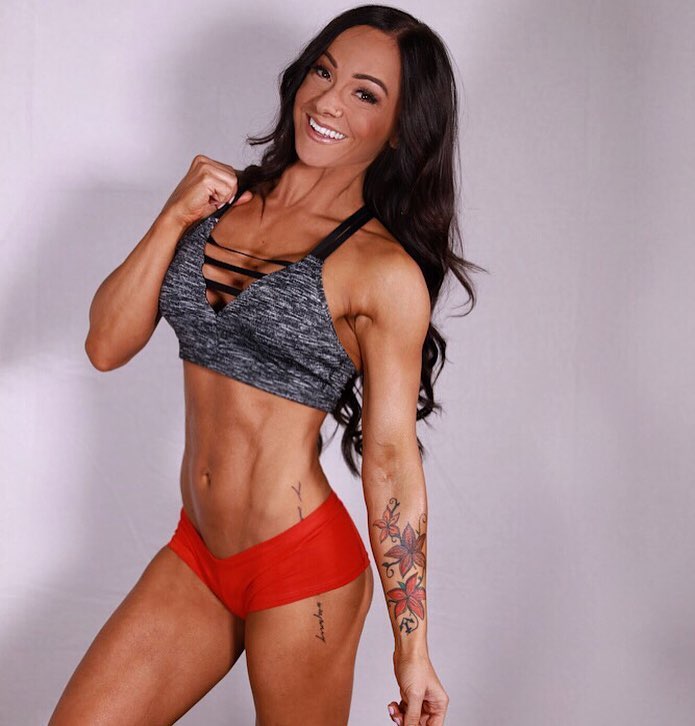 After graduating from college, Caryn moved to her new home and started working as an elementary school psychologist.

Although she began a new career, Caryn was still dragged down by her health and body image issues which prevented her from fully enjoying her life.

It wasn’t until 2012, when Caryn’s eating habits started to improve. Around this time, she was introduced to weight training and bikini fitness competitions.

Although Caryn had little experience in the field of fitness, she saw it as a perfect way to solve her body image and eating issues; deciding to prepare for her first bikini fitness competition.

It turned out Caryn’s decision to compete helped her like nothing else she’d tried before before – throughout the process of preparing for her first show, Caryn learned to eat healthy, as she says “I learned to look at foods I ate as a fuel.”

Over time, Caryn developed a passion for healthy eating and taking care of  her body, and her mind. As a result, her physique started reflecting her ‘internal’ change – she began to look lean and fit. 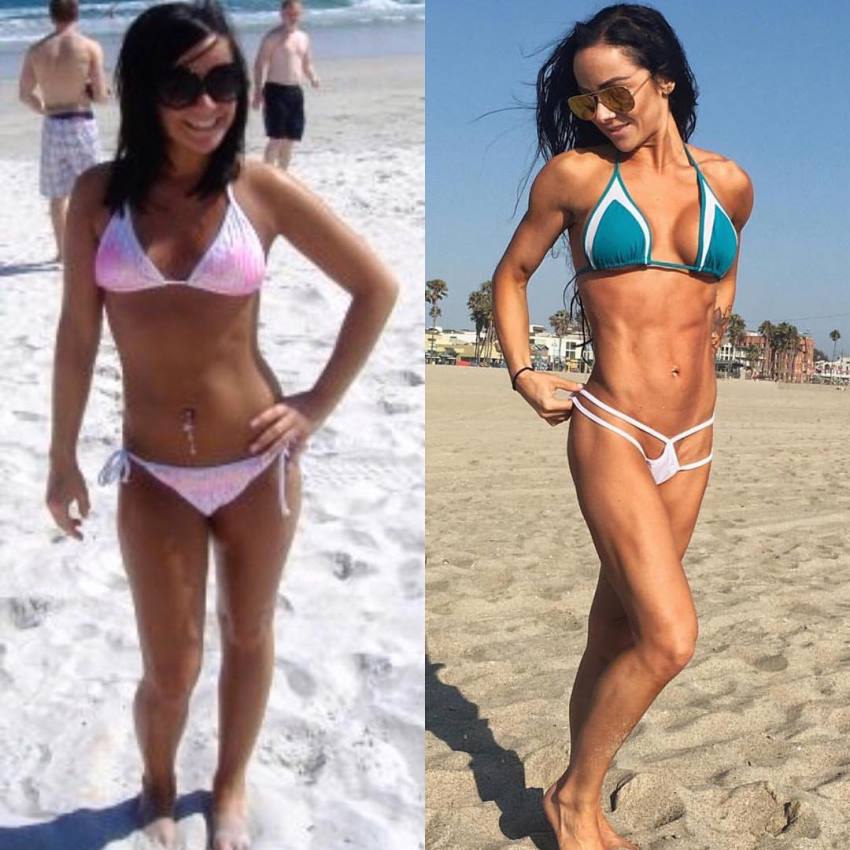 Caryn Nicole Paolini’s transformation before she began her fitness journey.

For the first 10 weeks of Caryn’s preparation bikini show, she trained without anyone’s help. She used online resources, as well as fitness and nutrition magazines as her guide for getting in shape.

However, Caryn later realized she couldn’t walk the entire path towards her debut contest alone. As a result, she set about finding a coach who would help her fine-tune her training regimen, diet, as well as posing routine.

Three weeks out, Caryn was introduced to a coach named Staci Boyer. He helped her with the final stages of her preparations; making sure that she stepped on the stage in the best shape possible.

In April 2012, after months of hard work and sacrifice. Caryn walked on the bikini stage for the first time in her life. Reminiscing the event, Caryn says she was thrilled, and all she could think of was competing again.

Caryn didn’t have to wait long to step onto the stage again. This time, it was the NPC Mid-States Muscle Class, where she finished in the top spot in both her height class and overall category.

By the end of 2012, Caryn already had five competitions under her belt. Including two victories, and one runner-up finish.

After a few years, Caryn decided to take the chance by working in fitness full-time. She left her school psychologist job, and turned to training and competing on the bikini stage more often.

From there, Caryn began expanding her expertise in weight training and nutrition. She first earned her personal training certification, which was followed by Sports Nutritionist certification several months later.

This, however, was just the beginning of Caryn’s ambitious endeavors in fitness. She went on to open her online lifestyle coaching programs, diet and exercise coaching, and competition preparations.

In addition to all of this, Caryn continued competing on the bikini stage – winning her Pro Card at the NPC Nationals in 2013. 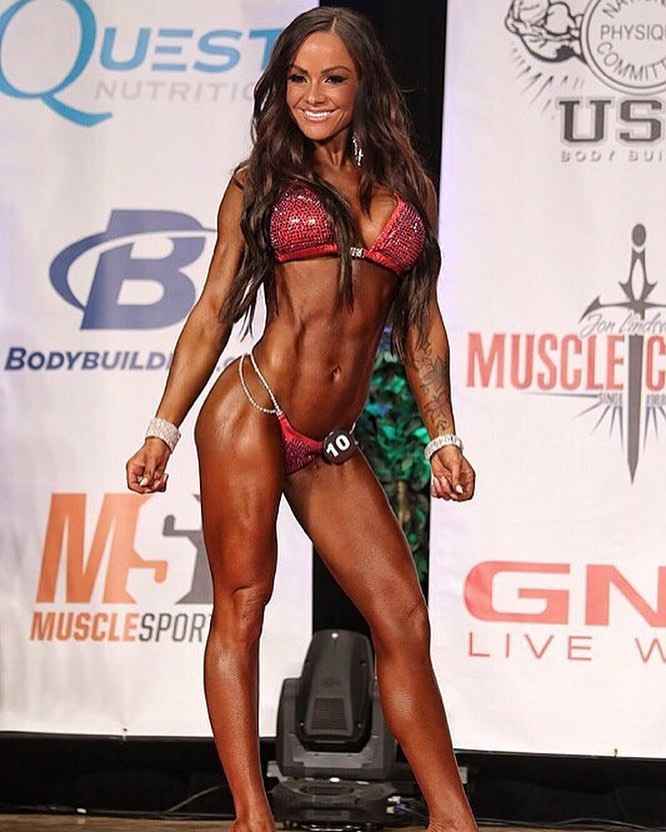 Caryn’s Life as a Pro

Riding high from her triumph on the bikini stage, Caryn made her professional debut at the 2014 St. Louis Pro. She finished in 4th place that day, narrowly losing the top 3 spot to Jessica Arevalo.

From there, Caryn continued to climb her way up the bikini pro ladder; partaking in shows such as Dennis James Classic, Dallas Pro, and Europa Super Show.

During 2016 and 2017, Caryn kept on competing at the highest level. Alongside expanding her online fitness coaching business.

Some of Caryn’s most significant results from this period were the top 3 place finishes at the 2016 Salt City Showdown, and the runner-up place at the 2016 MuscleContest Pro.

With her extensive list of achievements in fitness and competing. Caryn has kept on growing her reputation as an online personal trainer and bikini athlete.

She shows no signs of stopping, and says; “I feel fortunate and blessed for the opportunities, friendships, and experiences that fitness and competing brought into my life. 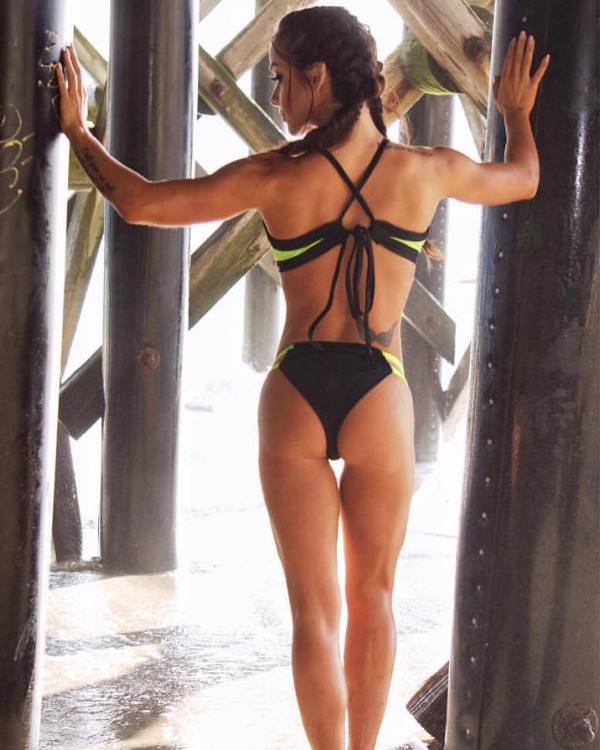 And in turn I was able to release myself from self-doubt and fear, step outside of my comfort zone, and ultimately do the I most wanted to do and achieve the fulfillment I always desired.”

Caryn doesn’t take rest days often, she’ll only have them when she feels she overdid it in the gym.

In the build-up to a contest, Caryn may lower her weight training frequency to five or six times per week.

However, even on her rest days from the gym. Caryn usually does some sort of cardio to get her heart pumping.

In her workouts, Caryn tries to get five sets per exercise; doing eight reps per set.

Her body responds the best to high-volume training, so she makes sure to add in additional sets into her training.

If Caryn wants to add even more volume, she’ll include methods like supersets and drop sets in her workouts. 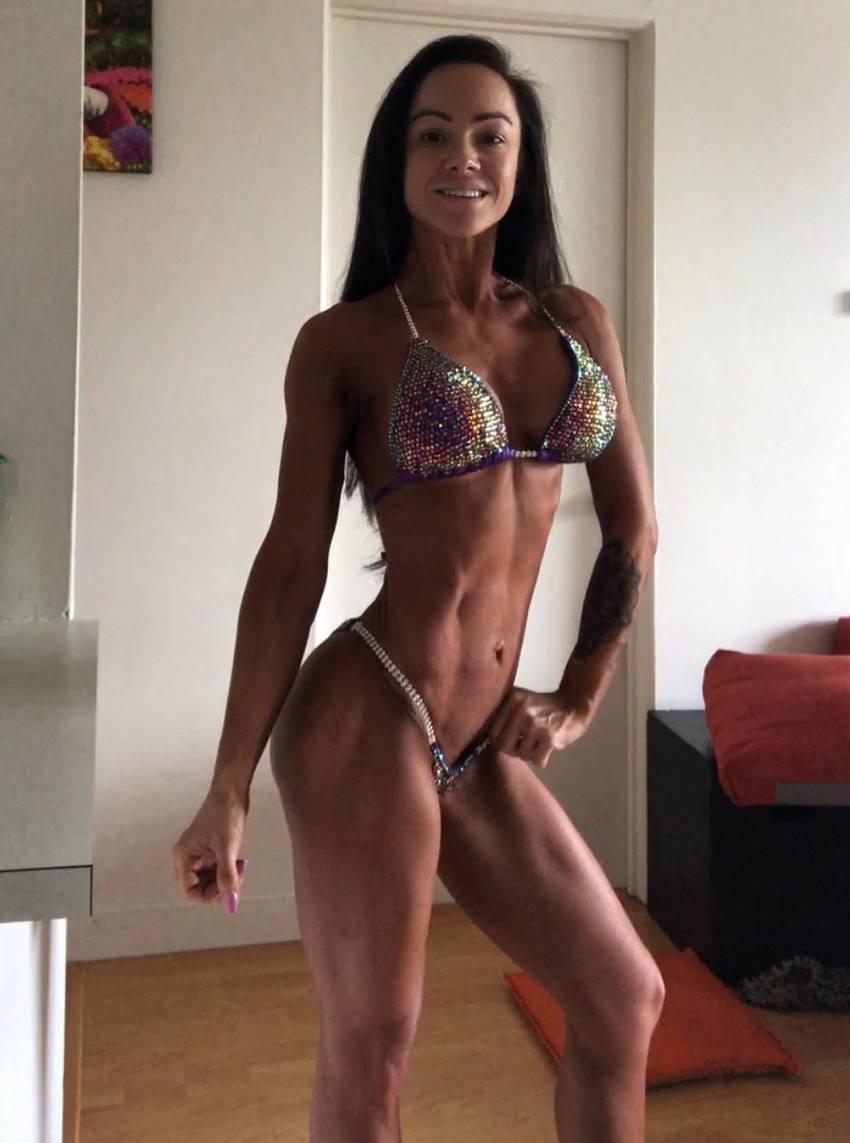 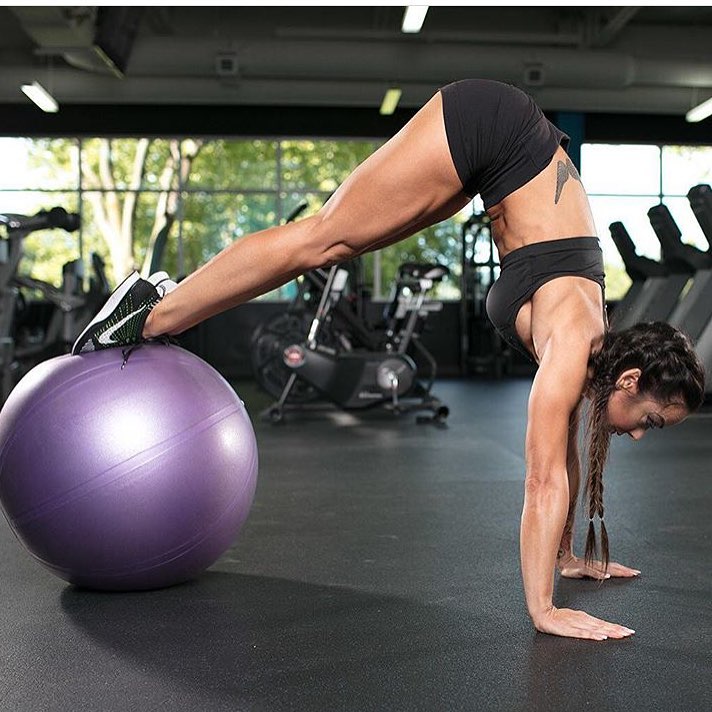 Dieting Down for a Bikini Contest

Another important factor in Caryn’s dieting phase is her protein intake. She makes sure to get as much lean protein as possible, so that her body doesn’t break down its muscle tissue while ‘cutting.’ 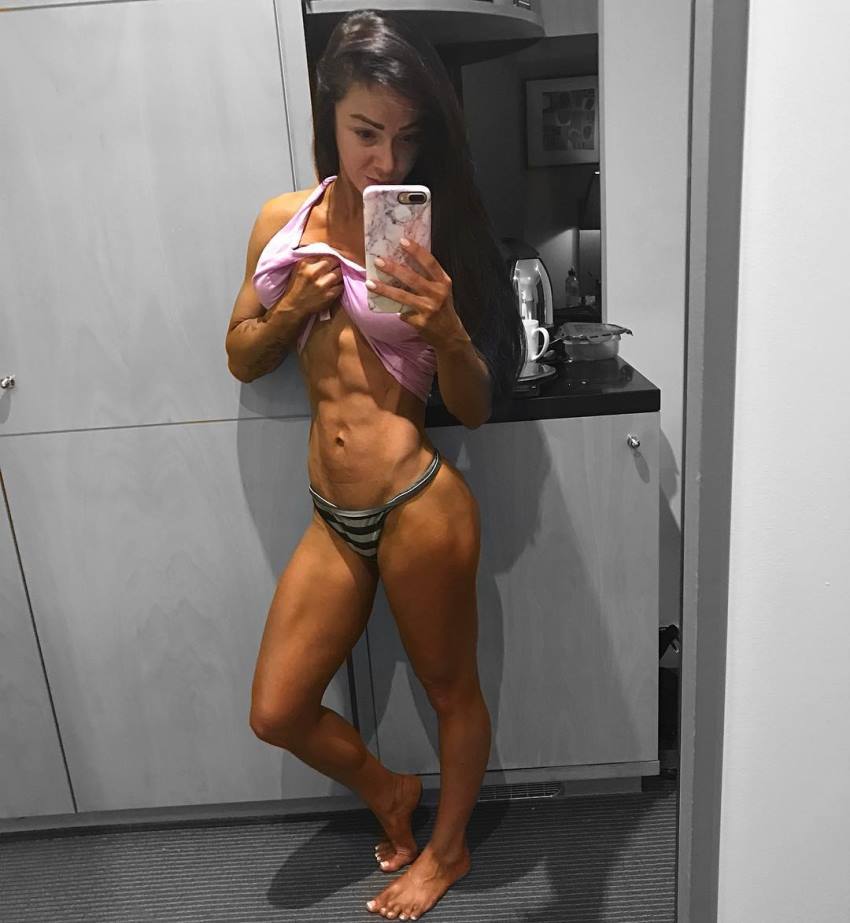 Caryn says a healthy diet and regular exercise always comes first. Only when those two are ‘in check’, she’ll get some quality supplements which will help her achieve her fitness goals faster.

“While no supplement will take the place of proper diet and training, it can help, when those two things are in line with your body, its needs, and your goals first! Strategy first, then supplementation.” 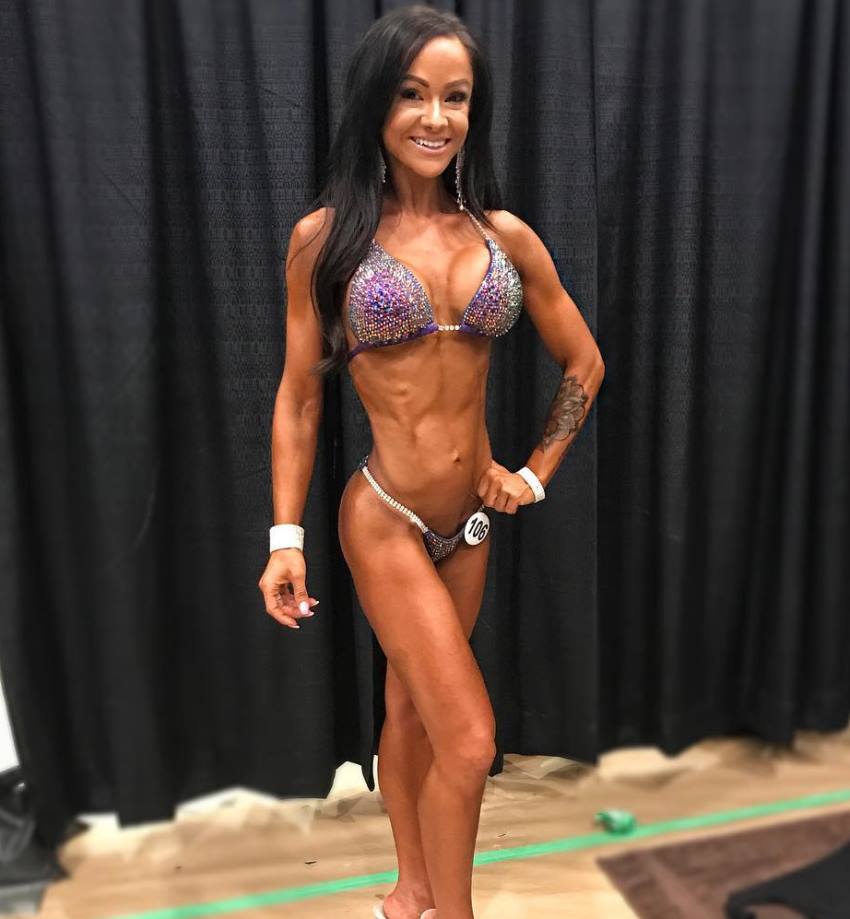 Caryn’s passion for fitness was born as soon as she stepped into the gym for the first time.

But it wasn’t only training that Caryn became infatuated with. She was also intrigued by her dieting process for competitions; realizing that she could change her body from the bottom-up by just following a well-crafted, structured meal plan.

Needless to say, it took Caryn a lot of internal willpower and motivation to push through the obstacles on her journey, and also – to come out successful at the end.

Today, her inspiration lies in helping others discover their own greatness through a healthy lifestyle. She uses her extensive knowledge to educate, motivate, and inspire every individual that wants to make a life change.

Caryn’s main influences in fitness are people from her team. They include her fellow female athletes, competitors, and coaches.

In Caryn’s own words; “My team sisters and coaches inspire and push me to be the best. Seeing my teammates balance the various aspects of their lives and still push themselves to achieve their fitness goals is a huge source of inspiration.” 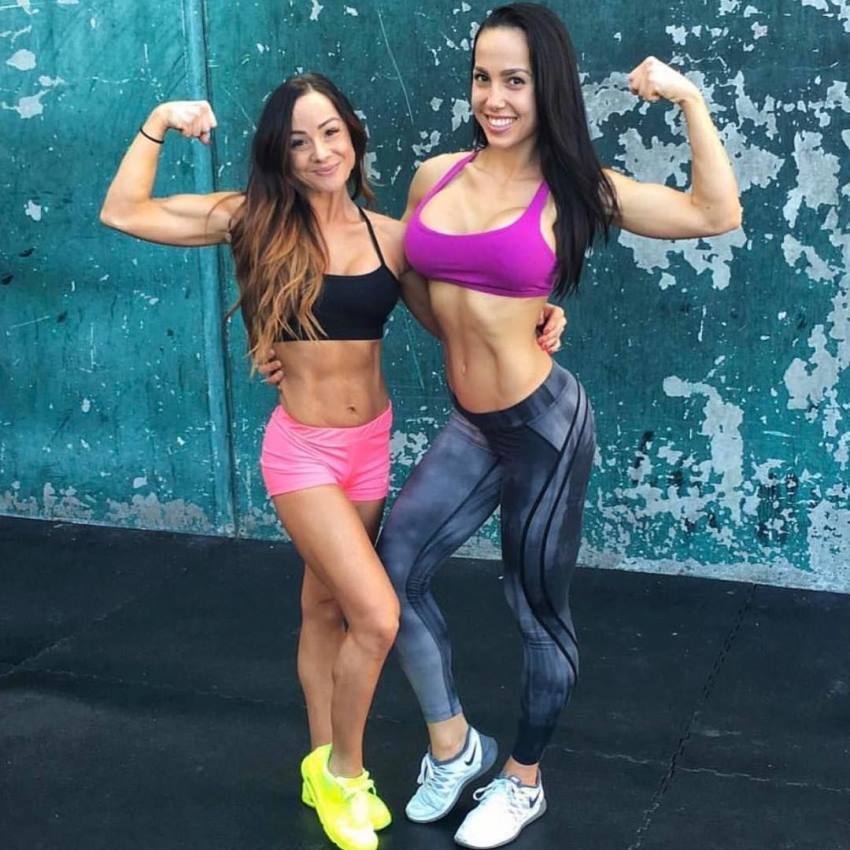 One of the athletes Caryn looks up is Nicole Nagrani. She met Nicole at the Arnold Classic in 2013, saying; “She was incredibly nice and down to earth.

I learned that she’s a full-time student pursuing a career in the medical field as a doctor. It’s refreshing and inspiring to know how much she accomplished at such a young age.”

Even as a medical student with so many responsibilities, Nicole Nagrani has been able to become an IFBB Figure and Fitness Pro competitor, as well as a well-known fitness model – something that motivates Caryn to push her own career to its highest level. 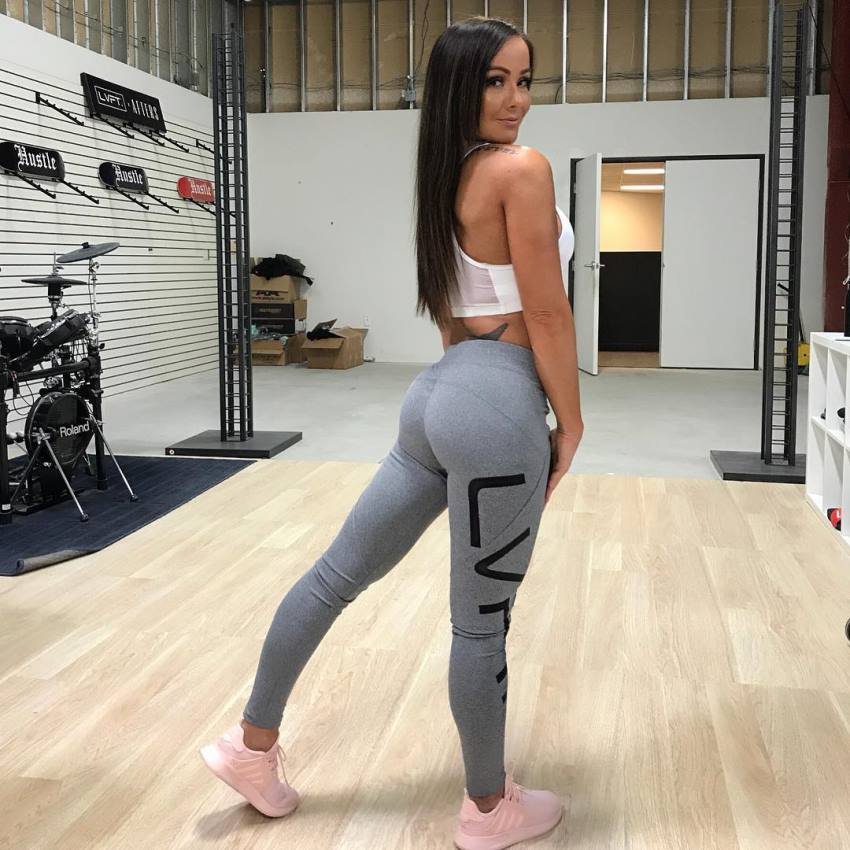 “We can’t always control the circumstances that life throws at us, but we can control how we react and respond to them. My life changed the moment I realized I was in control.

My life changed the moment I stopped making excuses and stopped procrastinating on making the choices that I knew would propel me into the women I so wanted to become. Yours can too.”

What we can learn from Caryn Nicole Paolini

The main takeaway from Caryn Nicole Paolini’s story is that with enough effort and knowledge, you too can transform your physique.

Coming into college, Caryn’s life changed for the worse when she developed serious eating disorders. However, with the help of weight training and a healthy meal plan, she was able to overcome her hurdles; building a physique, and career of greatness along the path.

Whether you’re looking to lose body fat, gain muscle, or simply to look and feel happy. Then, be sure to take an example from athletes like Caryn Nicole Paolini – they can prove useful in times when you want to make a change for the better – be it in fitness, or anything else. 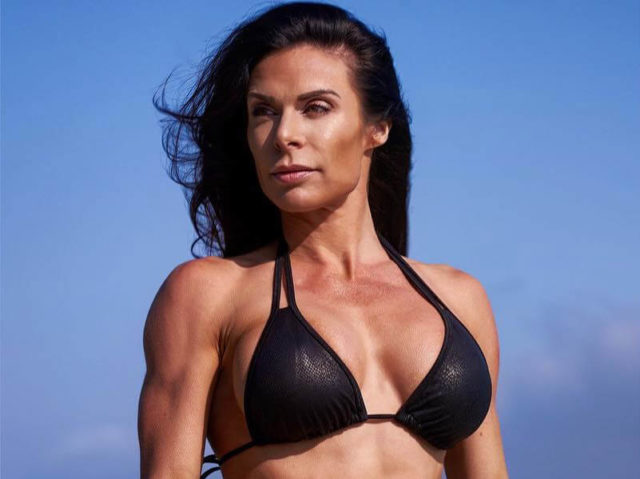 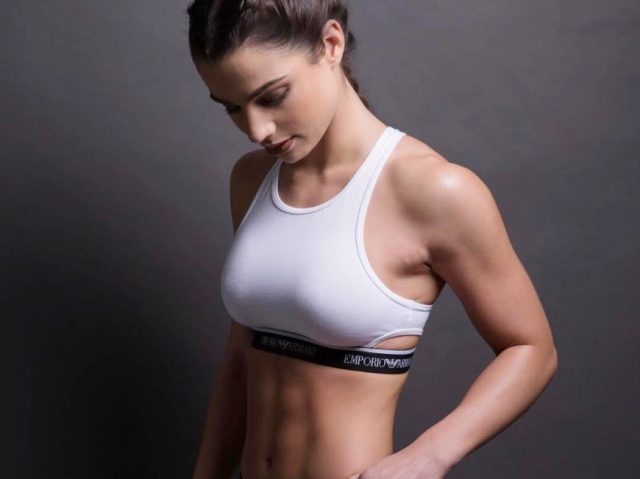 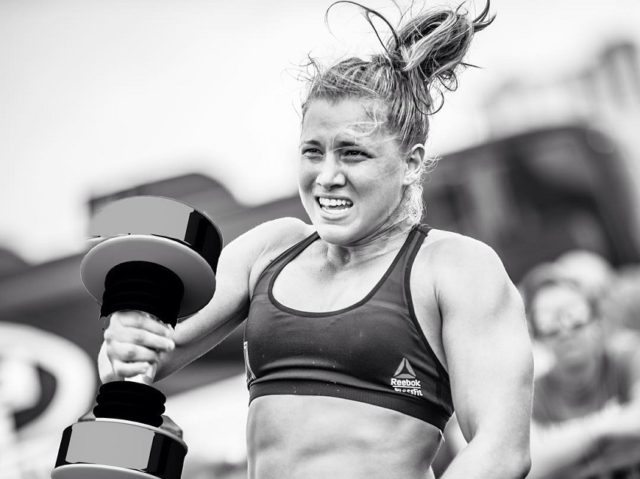 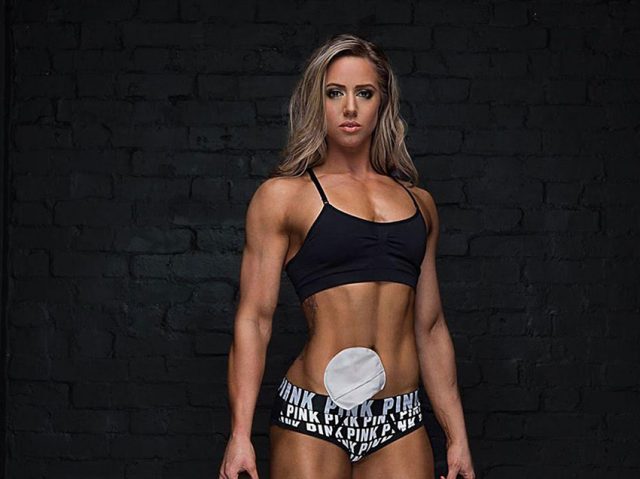 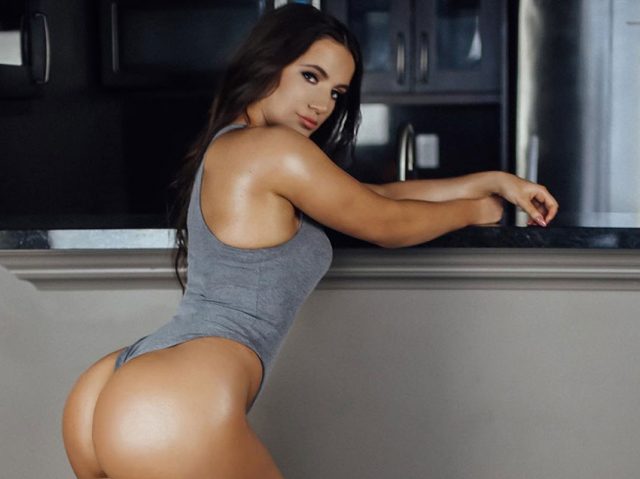 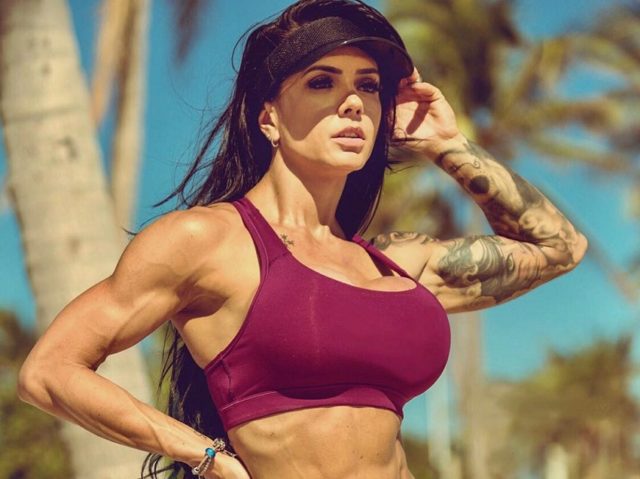